Leaving Lyndow is a beautiful, but short, walking simulator with a story just asking for a sequel.

In Leaving Lyndow you play Clara, a young woman leaving her home town to join the Guild of Maritime Exploration. The game begins with you packing your bag to leave, and then lets you experience Clara’s last few hours in Lyndow.

Lyndow itself is a port town that has recently suffered from a devastating landslide that wiped out all of the important buildings, though this doesn’t feature heavily in the game. It does make me wonder, though, whether the developer may have more games planned for this game world.

The graphics in Leaving Lyndow are beautiful. 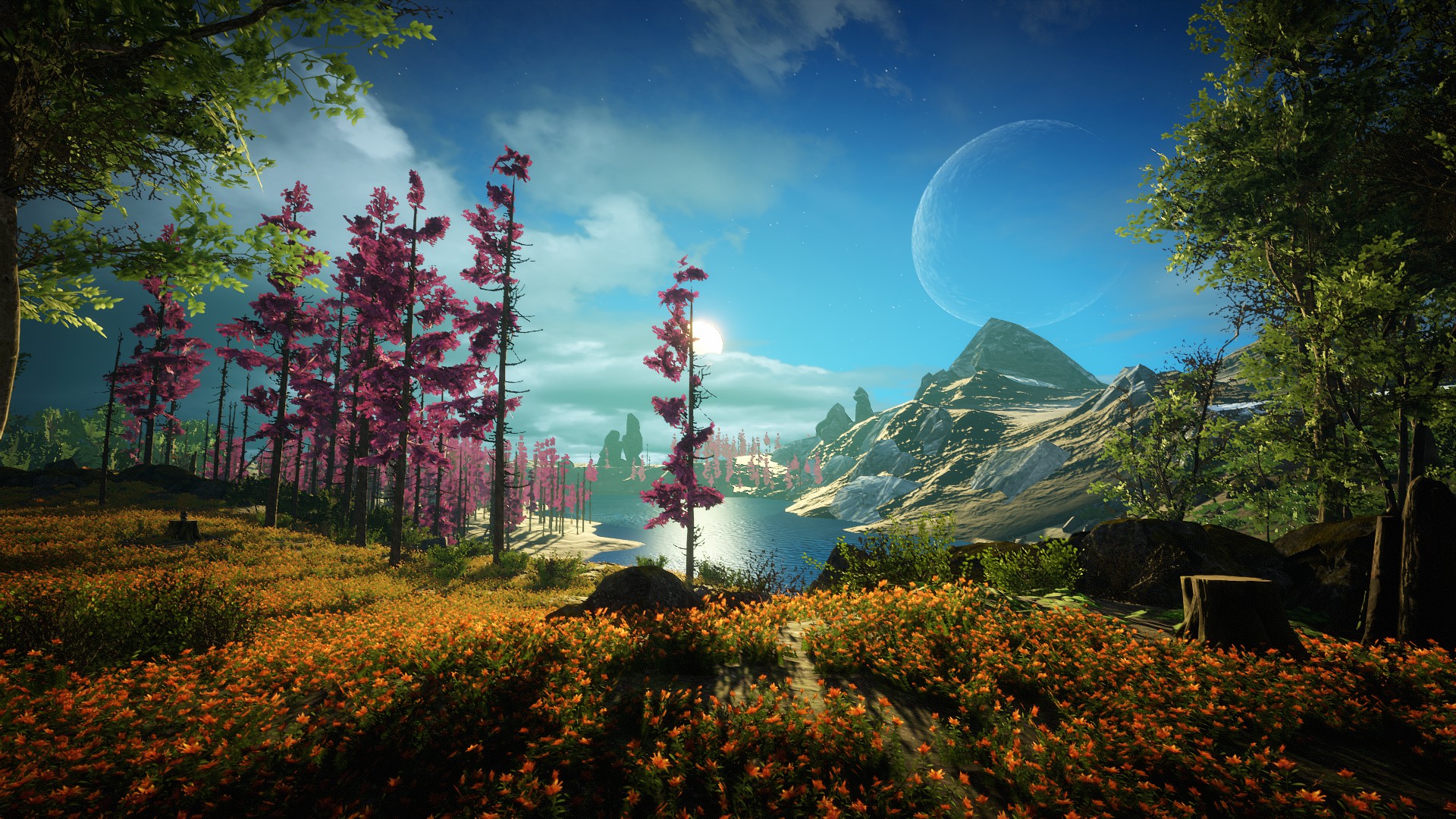 The game is played from first-person perspective, and it’s obvious that a lot of effort has been put into the graphics. There are only half-a-dozen or so scenes, but each one has been very well crafted from a graphical point of view.

Lighting is superb — though static — and textures are very nice indeed. The nature scenes have an array of plant types to rival many AAA games and they’re extremely well positioned, making these scenes look particularly nice. 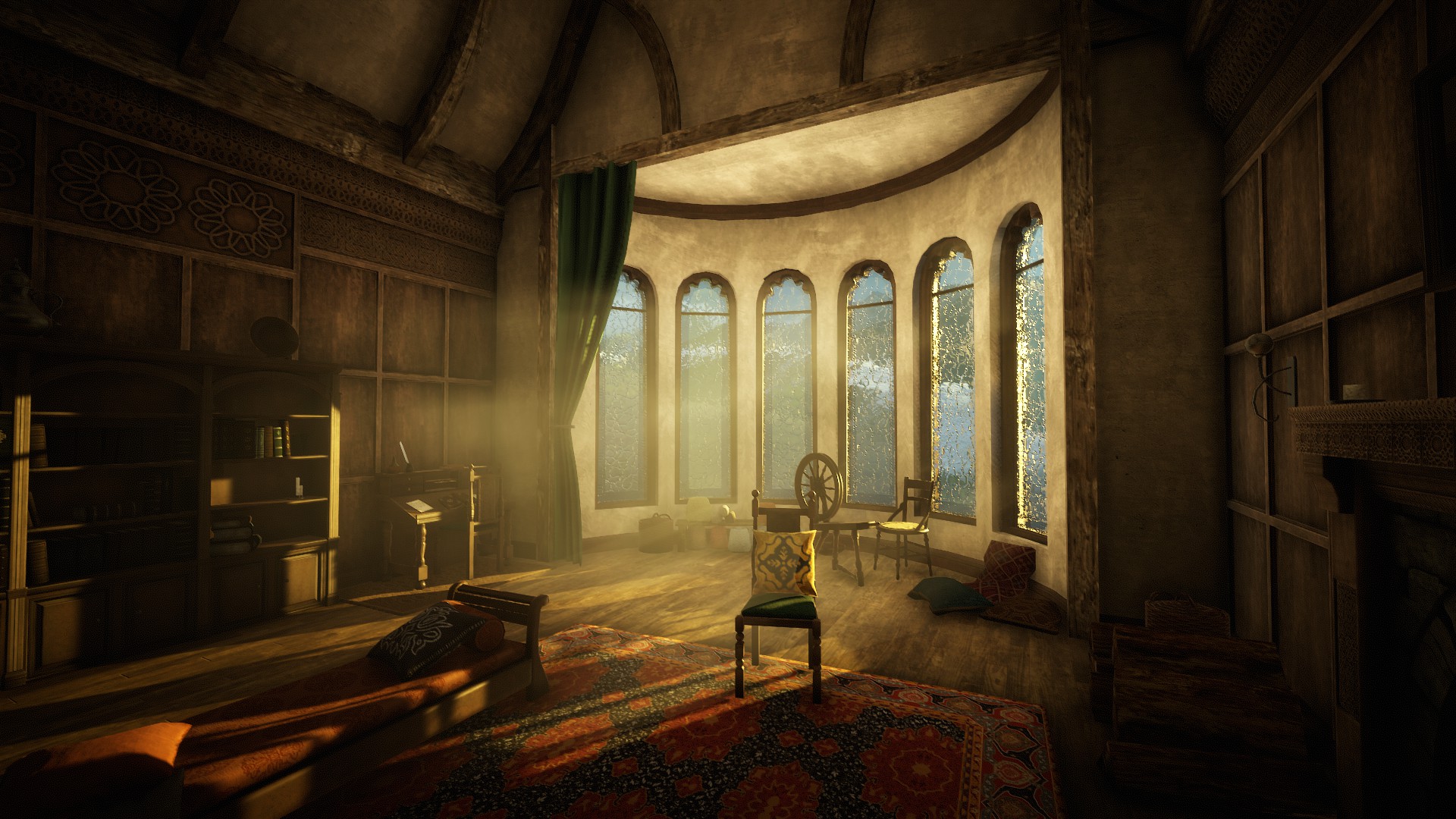 Characters are well modelled, but weird. Faces are half covered, with clothing that reaches up to cover the mouth, making me think of Milena (from Mortal Kombat). I really hope that wasn’t the artist’s intent! Animations are a little restrictive and ‘wooden’, but not bad, just not quite up to the same standard as everything else. 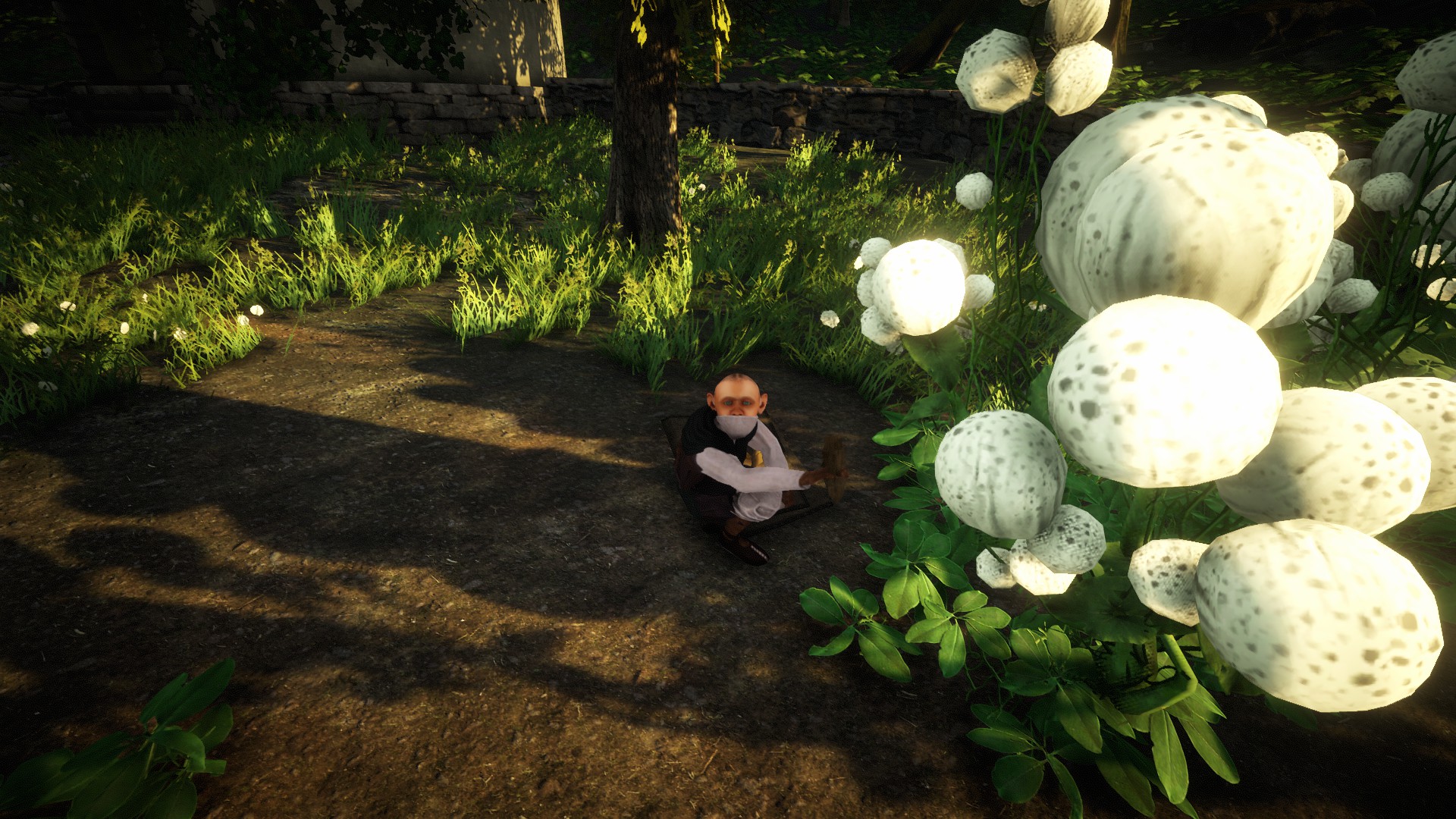 There are a handful of graphics options. I found the default field of view to be too high, making everything seem a bit fish-eyed. I found a value of 70 to be much more comfortable, but still couldn’t completely remove the effect when turning.

The music in Leaving Lyndow is soft and mellow, fitting the gameplay like a glove. Each scene has a different track, I think, but all of them are calm and soothing instrumental pieces. There’s a lot of piano & violin, and some wind instruments (or simulated versions thereof). It really is very pleasant.

Sound effects are few and far between, and don’t really play much of a role in the game.

There are no real voices, though the people you speak to make noises that sound a lot like a few syllables of ‘Simish’. Background noises in the teahouse include a general sort of ‘babble’, too, though it sounds like more people than are actually present. 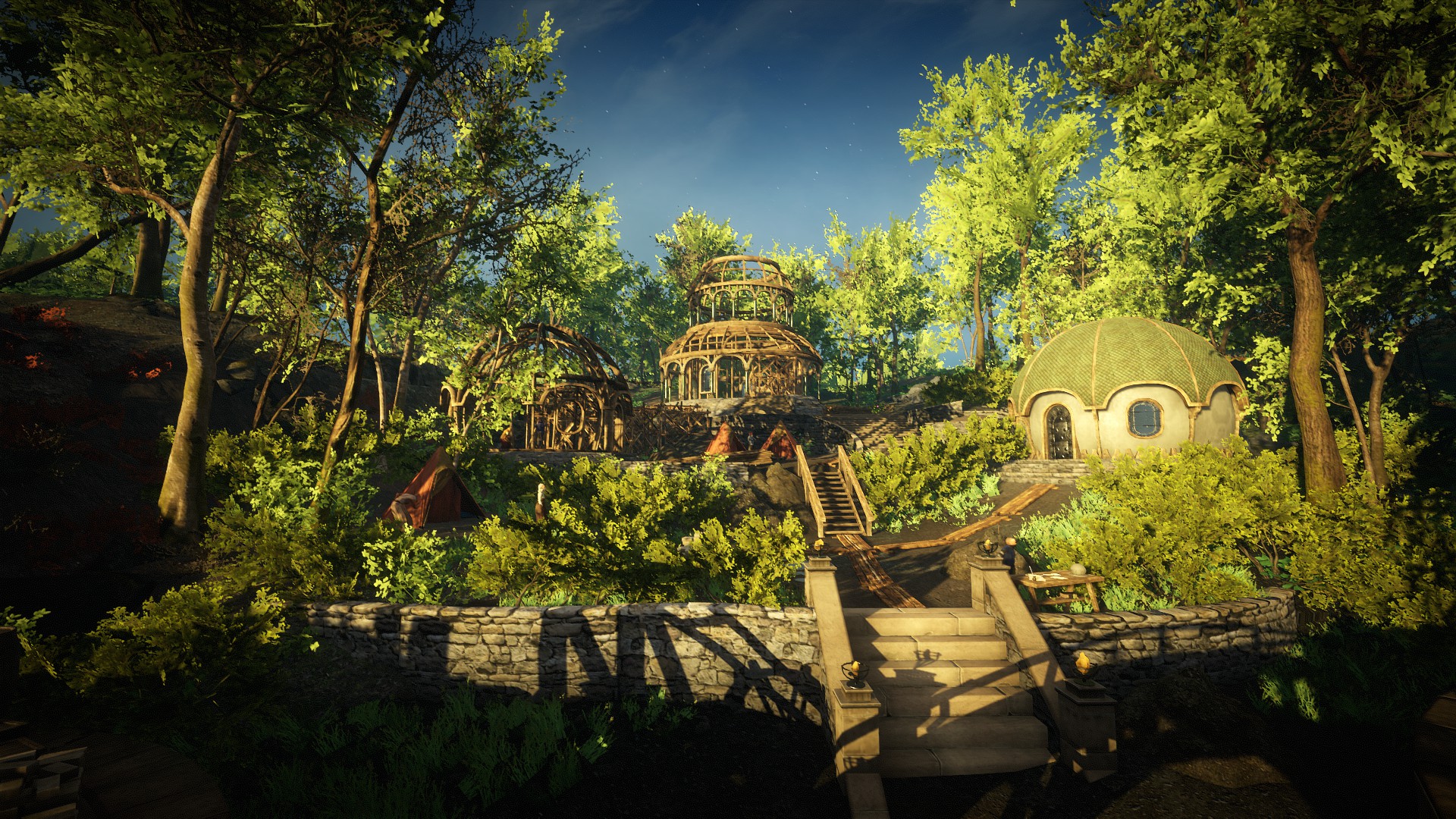 Leaving Lyndow is a first-person walking simulator. You wander about with WASD and control your view with the mouse, interacting with the world through the mouse buttons. It’s very slow going, but not frustratingly so; the game is all about experiencing Clara’s last day at home, so there’s no need to rush.

The basic gameplay involves walking about, collecting a few items, interacting with objects in the game world that elicit comments or spark of Clara’s memories of her childhood, learning about the story, and saying goodbye to Clara’s friends and relatives. There are a few simple mini-games — finding objects, playing tunes, rolling balls in a bowl, and playing a rudimentary sort of basketball — but these are distractions from the story. 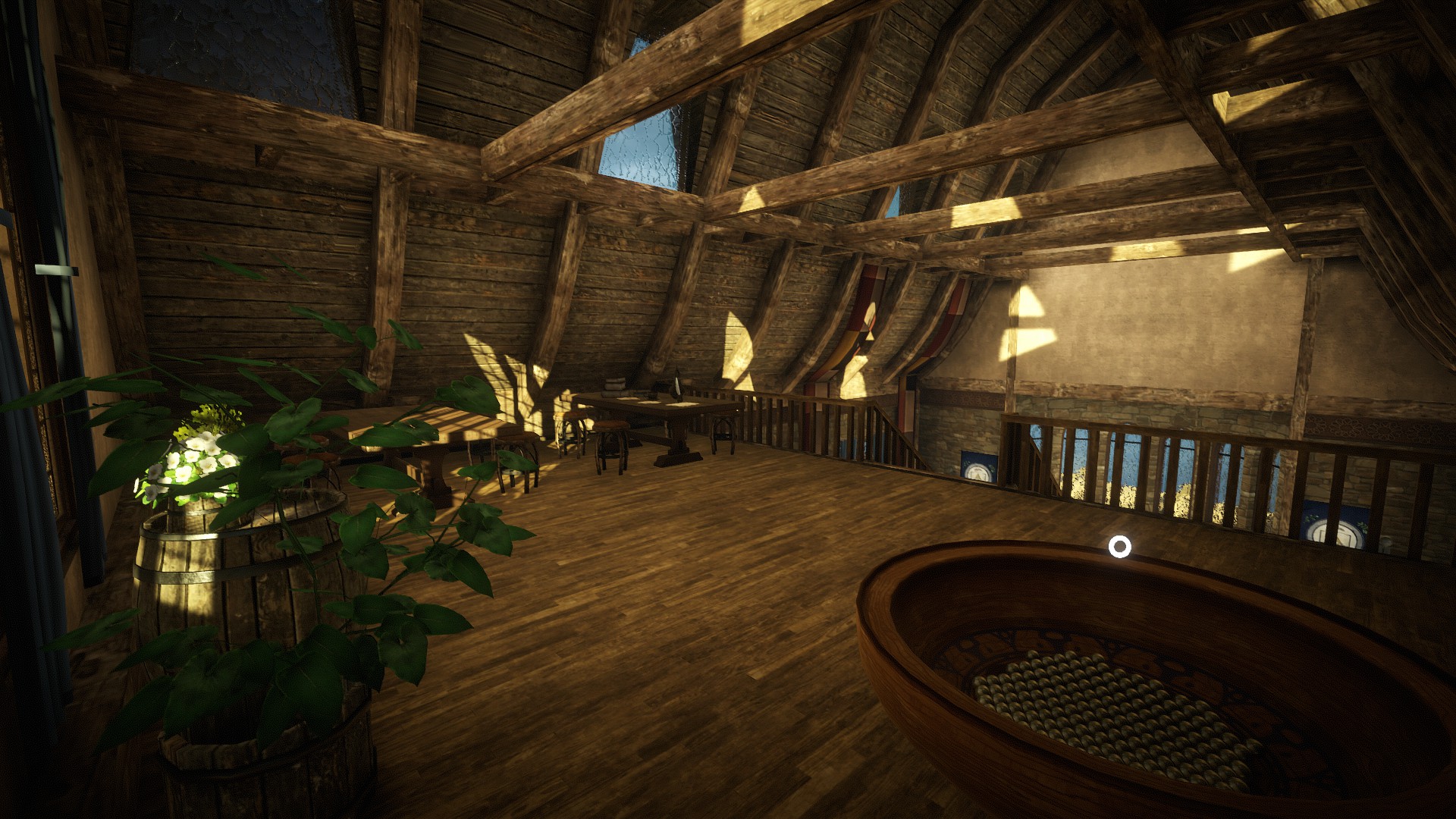 The game is VERY short. I completed my first play through in 47 minutes, and that included a couple of short alt-tabs to check achievements and write down a few notes for this review. I only received three out of seven achievements in that game, though, and three of the remaining achievements are hidden. Given that there are guides available that explain how to unlock the remainder of the achievements very easily, you’re basically looking at about an hour to complete the game with everything unlocked.

My one complaint with the story is the abrupt ending. A nice cut scene or at least closing comments would have been welcome, rather than just dumping me back at the main menu. 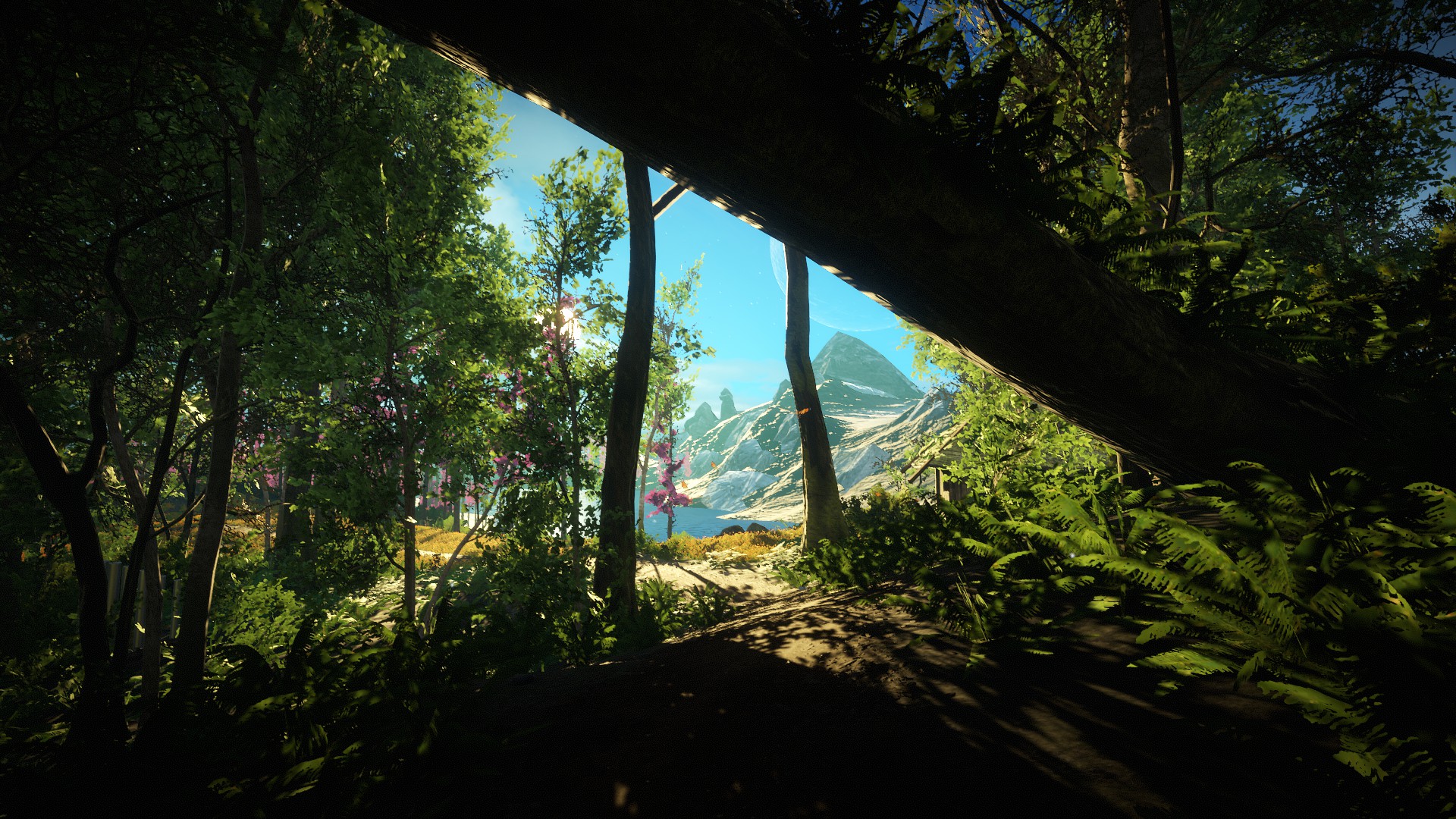 Leaving Lyndow is a very short game, but it’s also very reasonably priced. It doesn’t quite fit my dollar/hour rule for ‘good value’, but I find it very hard to dislike, regardless.

The game world is interesting enough that I hope to see it fleshed out in more detail in subsequent games from the developers; the graphics are absolutely top notch; and it’s clear that the game, short though it is, is a labour of love. If you’re in the mood for a casual stroll through half-a-dozen or so interesting locations and reading a simple short story while you look at pretty graphics, then Leaving Lyndow may be the game for you. 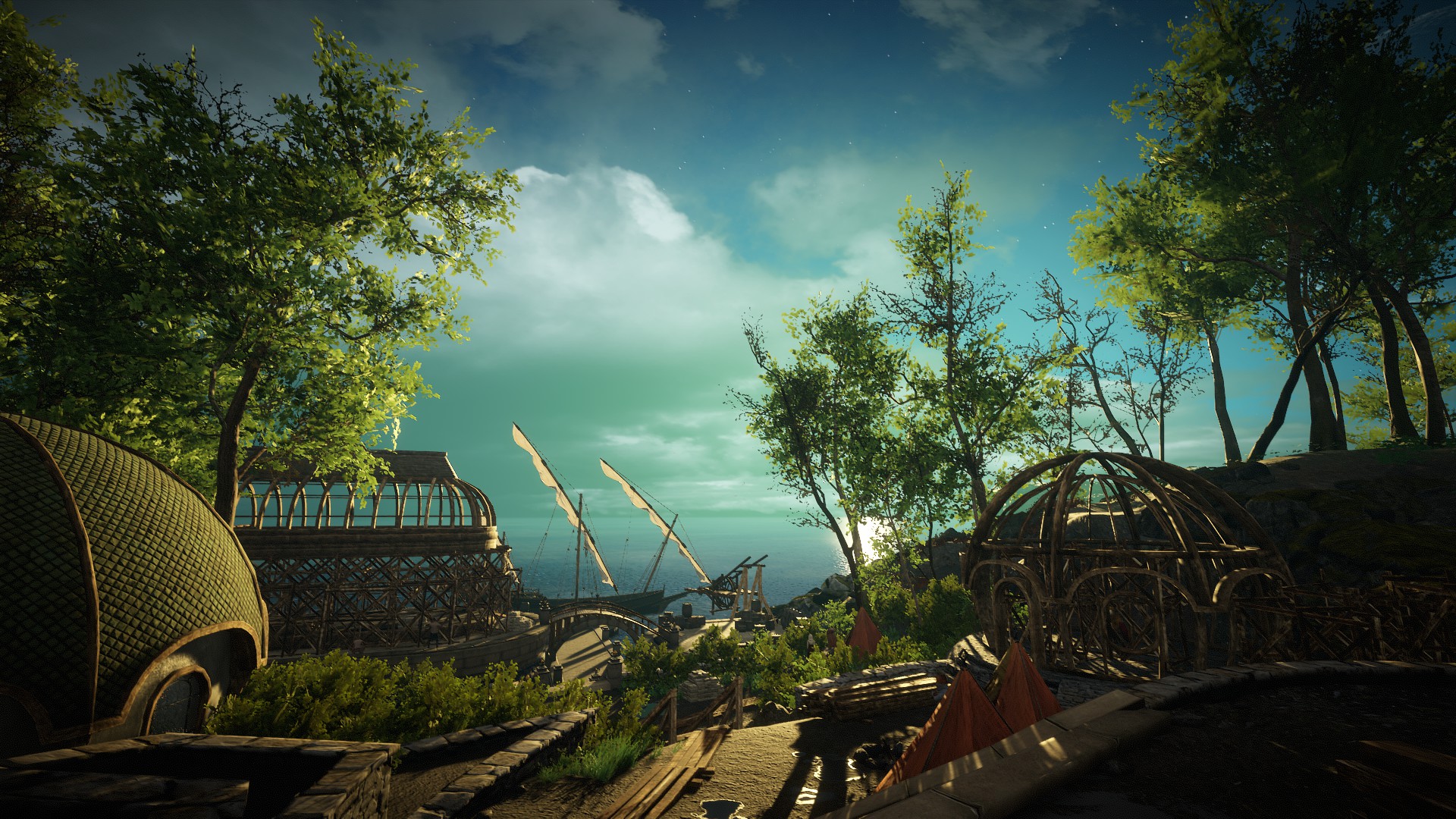