Kerbal Space Program is an amazing space simulation sandbox. CAUTION: may take over your life.

Kerbal Space Program (‘KSP’) is a physics sandbox game with a focus on space flight from indie developers, SQUAD. It was recently purchased by Take 2 Interactive, which is some indication of its popularity.

At its simplest, KSP is a construction and space simulation sandbox. You build rockets and space planes and attempt to launch them into space. You’re given a large range of parts and essentially free rein to construct what you want out of them, and the game attempts to model a realistic physics environment in which you can test them.

Kerbals are funny large-headed, yellow-skinned humanoids from the planet Kerbin. They seem to be relatively simple-minded, with only two personality traits in varying amounts: courage and stupidity. They’re also very industrious.

The graphics in Kerbal Space Program are rather varied in detail, quality, and performance.

The Kerbals themselves are cute and friendly looking, with tons of personality and wonderful animations. 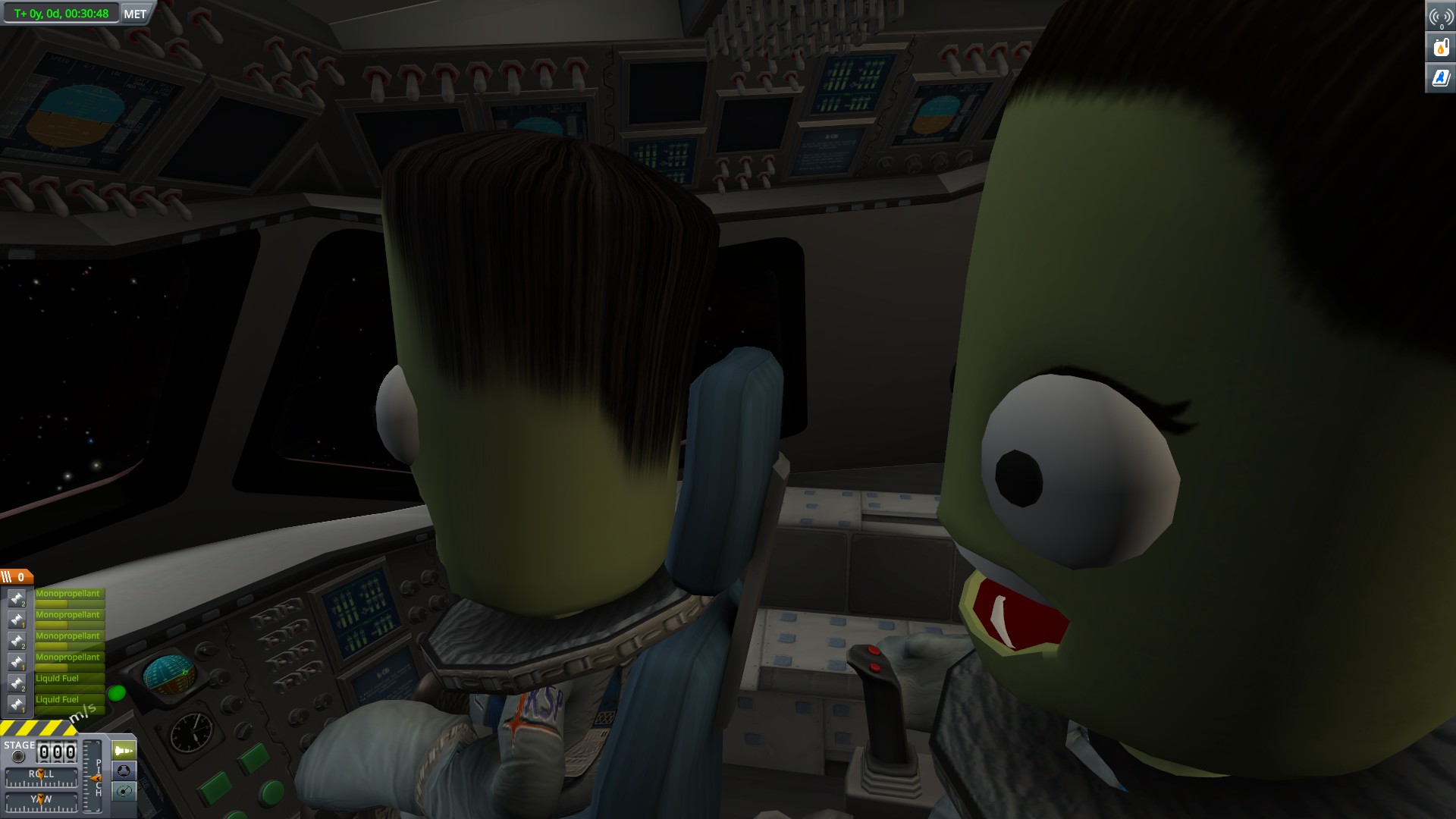 Rocket and spaceplane parts are well rendered and look great when put together, though I’ve seen a couple of minor clipping issues. It also seems a bit amateurish to allow the camera to move inside solid objects, but other than that the Unity Engine’s graphics work pretty well in KSP. Special effects are quite nice, especially the smoke and re-entry burn.

Space is beautiful and the planets and moons look lovely from a distance. Up close, though, they’re disappointing. From what I can gather there’s a degree of procedural terrain generation going on, which is fine, but the obviously populated Kerbal home planet of Kerbin looks deserted, with the Kerbal Space Centre being the only visible buildings. Terrain textures are rather low resolution and tiled in an artificial-looking way. Water looks rather poor, too, especially up close, and completely disappears if the camera moves below the surface. 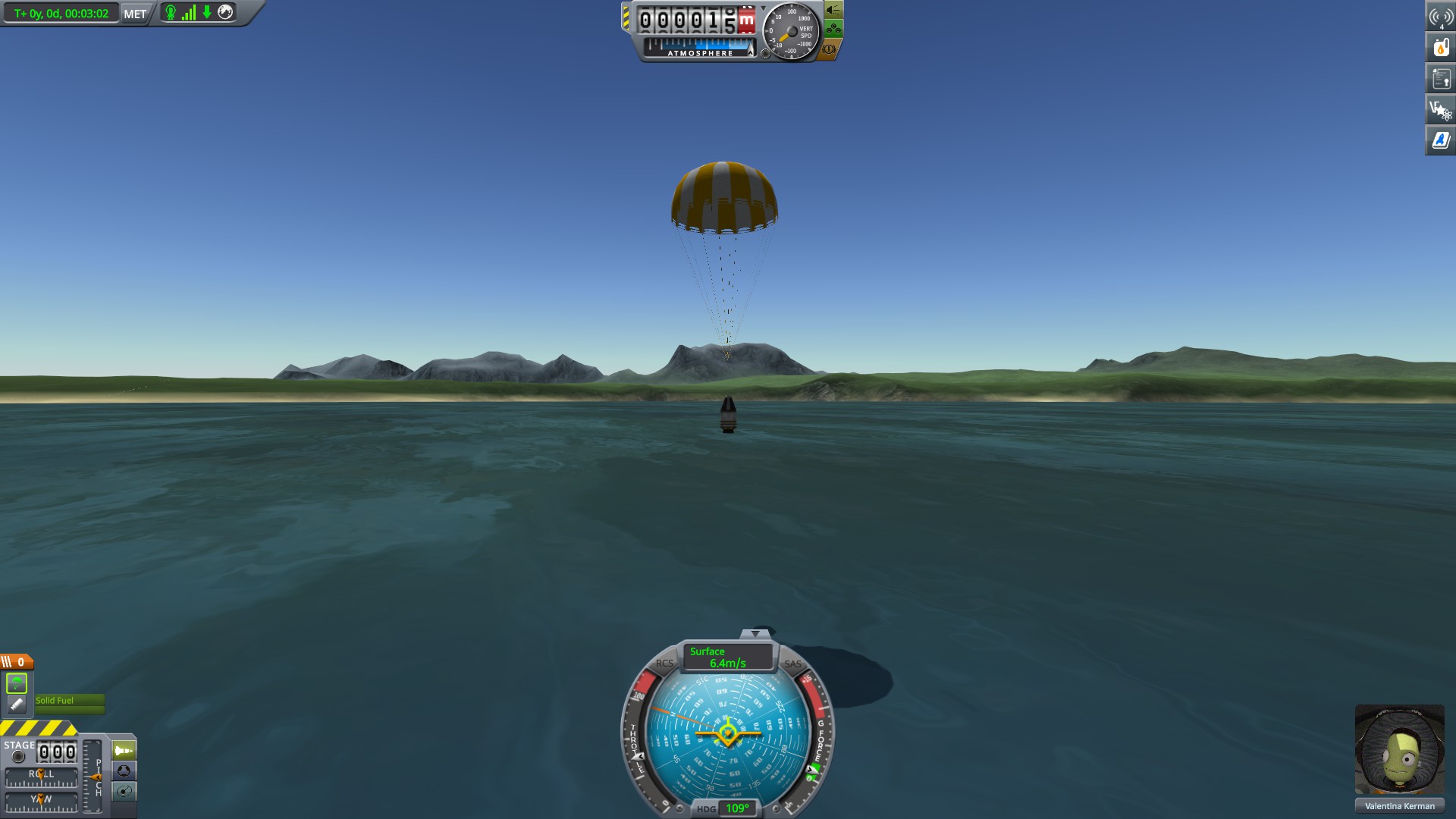 Beyond pop-in of different detail levels or entire geometries at the edge of the non-configurable view distance, I’ve had no issues with graphics performance during construction, take off or landing, or space flight outside of low orbit. Low orbit altitude, though, often causes stuttering as the terrain is drawn (and perhaps generated on the fly?) on your first orbit. The Mun in particular seems to cause stuttering on the first orbit after approach. 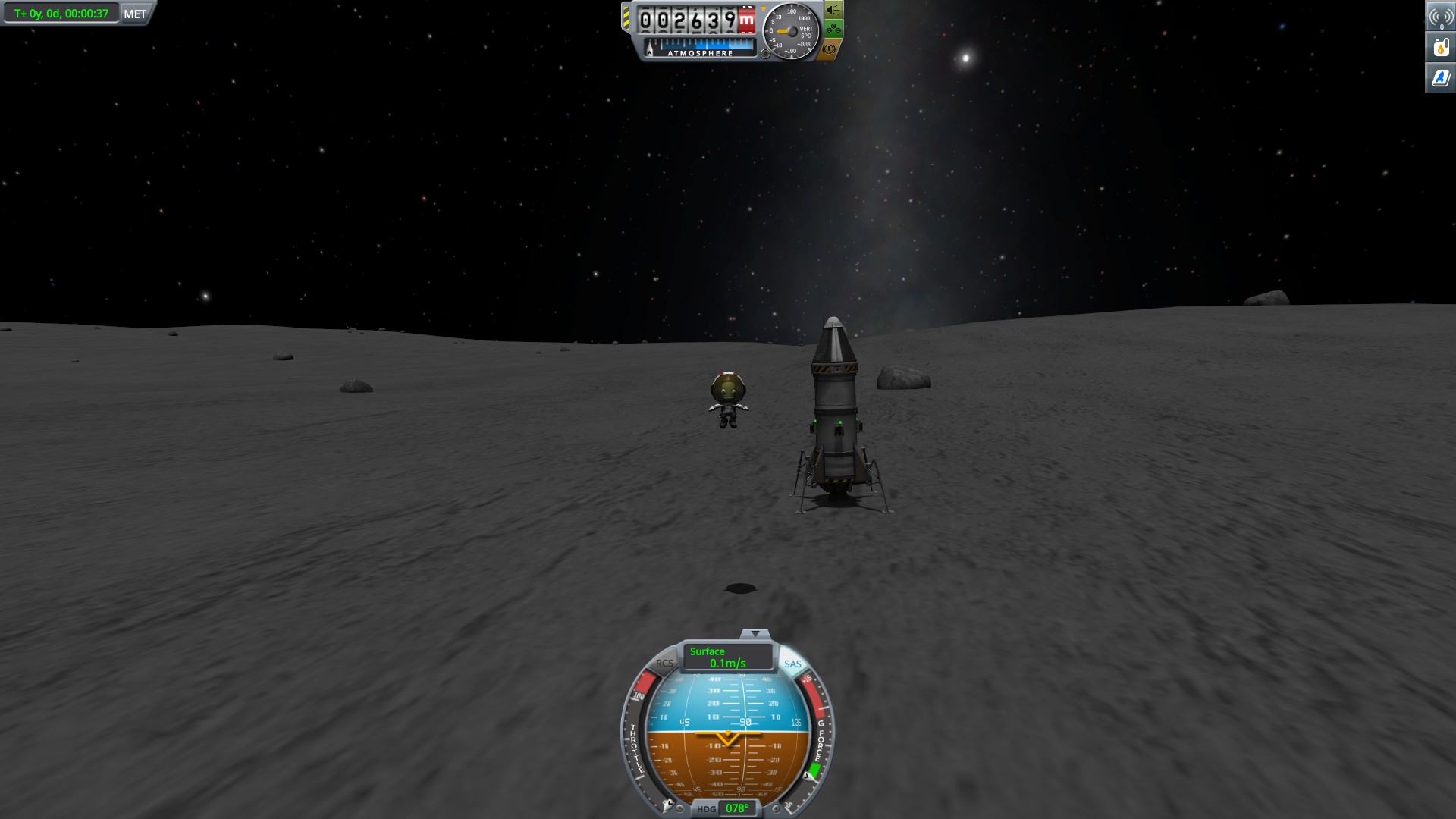 There are many graphics-related options, but no tool tips or descriptions. You’ll need to look up the more esoteric-sounding options on line to find out what they actually do.

Musical accompaniment to KSP is a collection of instrumental pieces that fits firmly in the realm of background music, but suits the game very well. The three pieces I’ve noticed in particular are the title theme, which is the sort of thing that might be played at an Independence Day rally; one of the construction music tracks, which is a lovely light-jazz track; and the ambient 2001-style music that plays when you leave the atmosphere of Kerbin.

Sound effects are mostly thrusters, wind, and explosions. They’re well done and I like the decoupler sounds especially. Catastrophic failures aren’t quite as impressive as I’d like, and splashdowns are a little louder than I expected.

There are no real voices, though some of the Kerbals speak a sort of ‘Simish’ (Kerbish?) on rare occasions, which can be amusing. 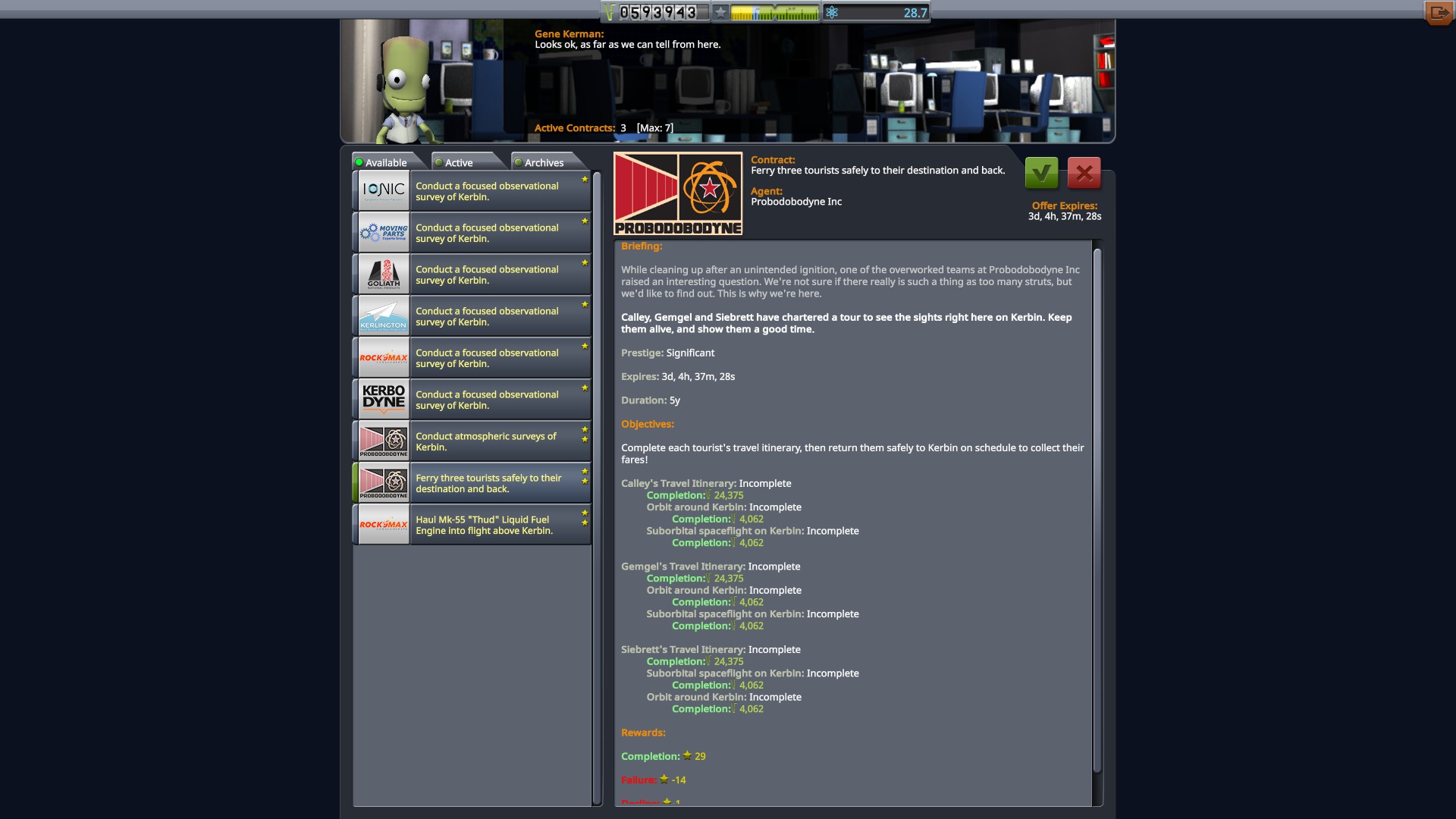 Fourteen tutorial missions comprise the first mode, in which the game leads you through a series of mostly well-defined steps towards a specific end goal, such as entering orbit or travelling to the Mun, and enables and disables various parts of the interface along the way. 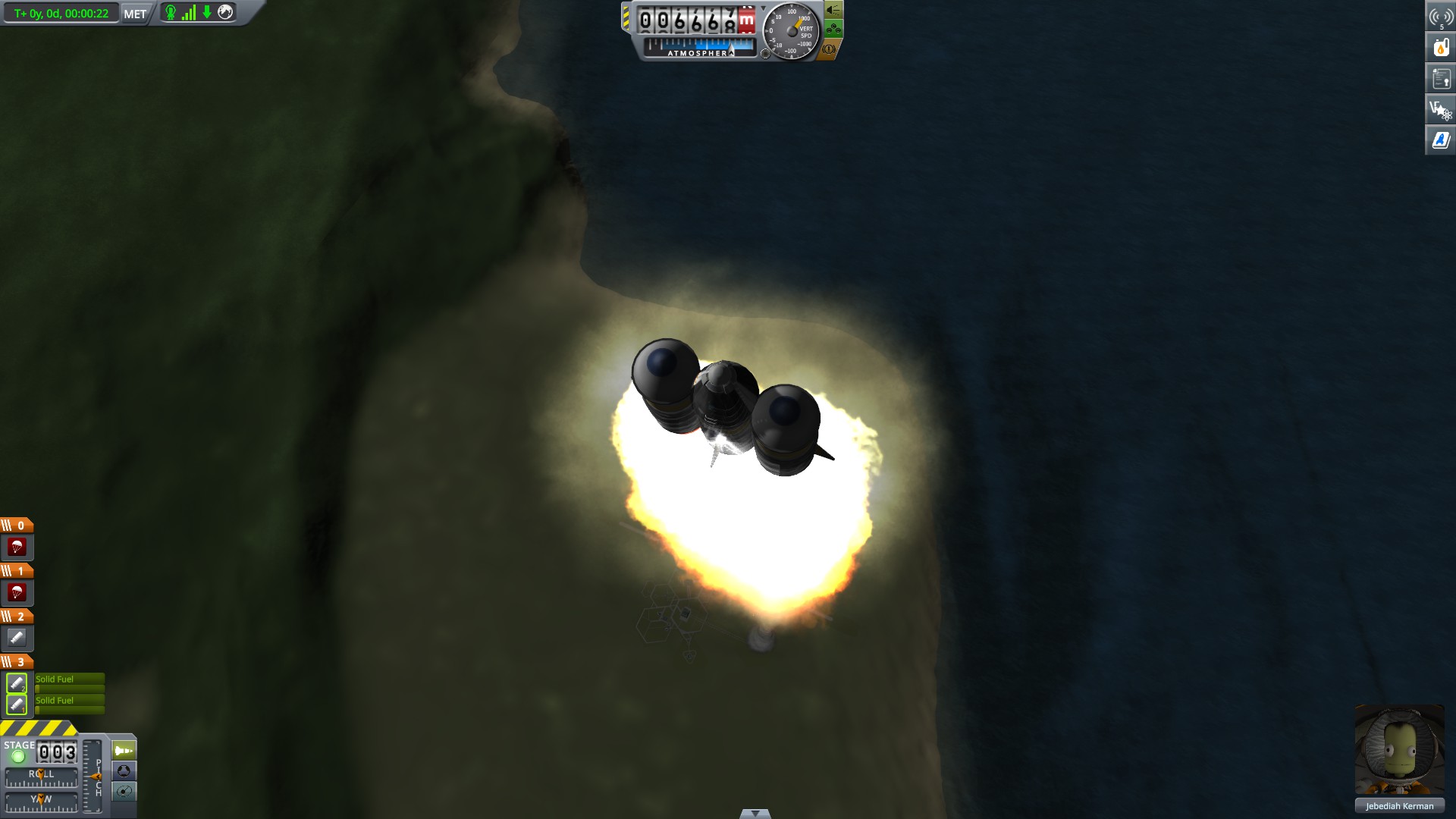 The first seven of these are exceptionally well done, though with a number of grammatical errors, and teach you the basics of construction and getting into space. These took me a bit less than three hours to play and absorb what they were telling me. After that, the developers’ attention to detail seems to have dropped a bit, and I found myself having to repeat some of the later tutorials due to scripting bugs (the tutorial would not advance to the next step) or simply not enough information being provided to allow me to reliably proceed.

The second mode includes sixteen pre-defined scenarios of varying lengths and topics. These are like cut-down tutorial scenarios without the step-by-step guidance. They’re a nice distraction from the main game, and a way to practice a few different types of actions.

The third mode, career, is to me the meat of the game. Here you’re in charge of the fledgling Kerbal Space Program. You start with a basic Kerbal Space Centre, the lowest level of science and associated items and research available, a handful of eager green astronauts, and each of the centre buildings at its most basic level. 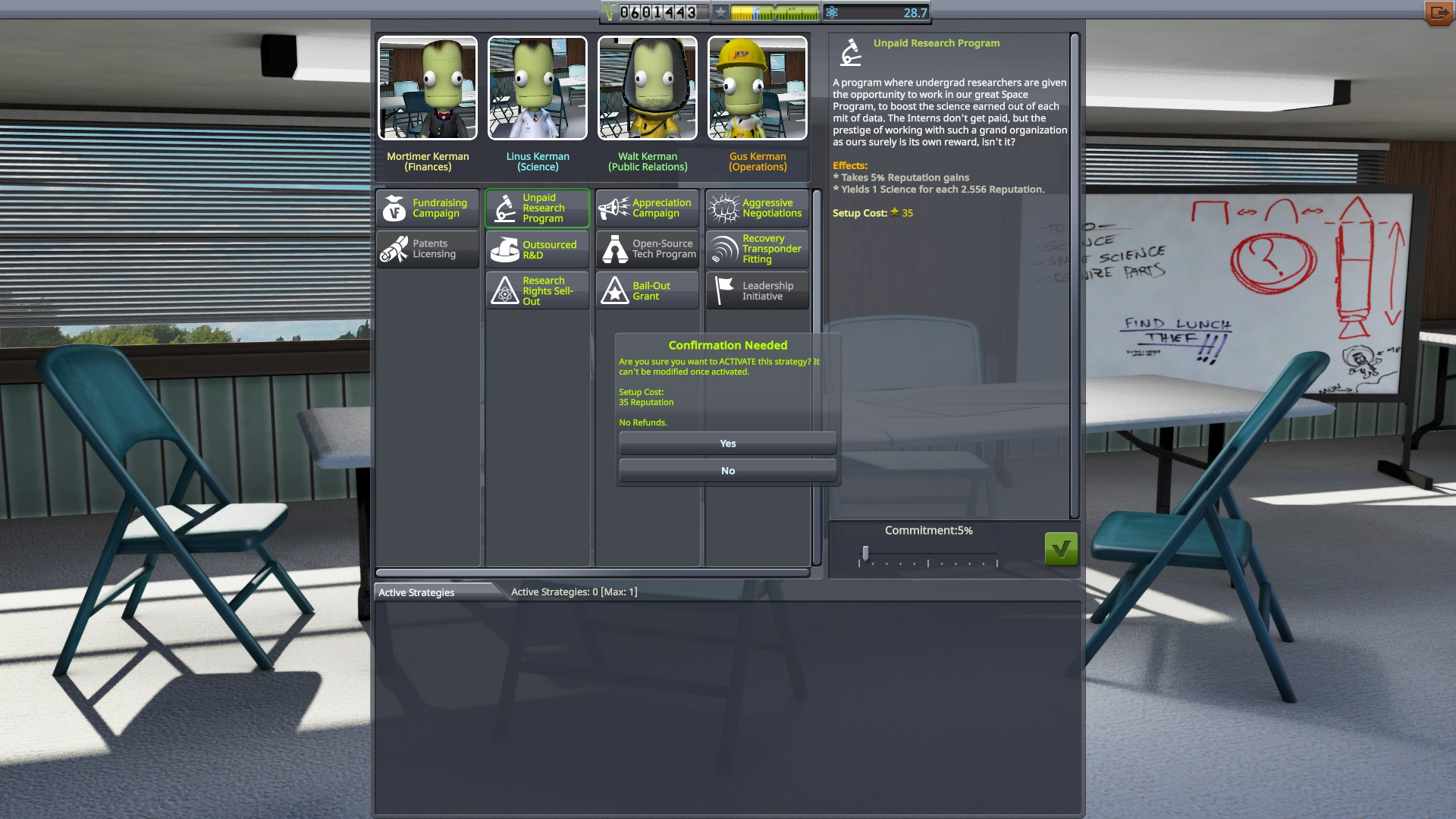 From there the game plays like a very slightly directed sandbox, with contract missions and generous rewards available for completing various actions, such as testing out components under various situations, reporting on areas of Kerbin, and taking tourists for a trip into orbit, to mention a few. You earn money to improve your centre, hire more staff, and build more rockets, and science points to unlock research and associated items in the technology tree. Before very long at all you’re designing your own atmosphere-exiting rockets, orbiting Kerbin, and setting your eyes on the Mun and beyond! 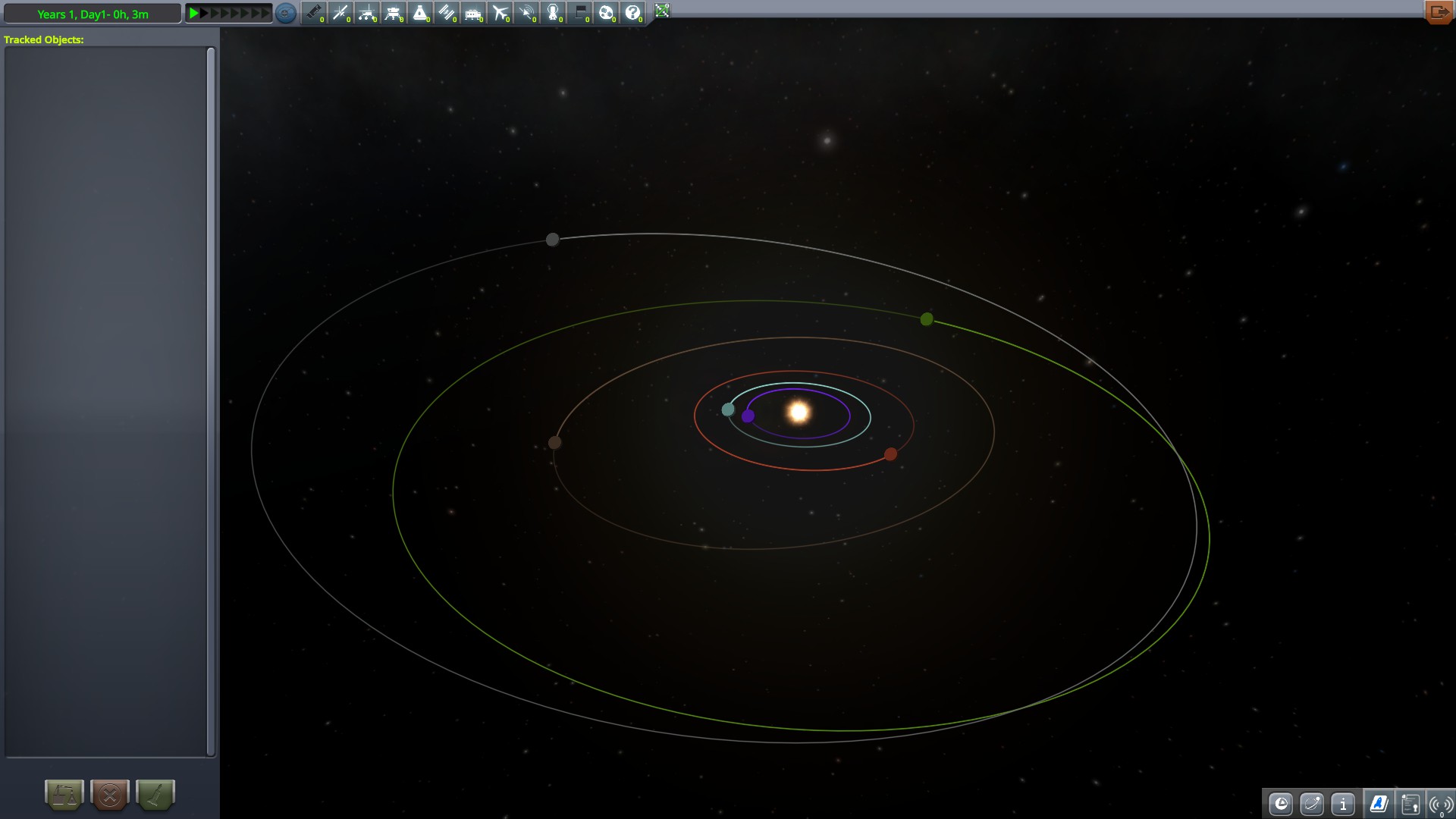 Science mode is fourth, which is a cut-down career mode with no contract missions and a focus on using science points to unlock research. 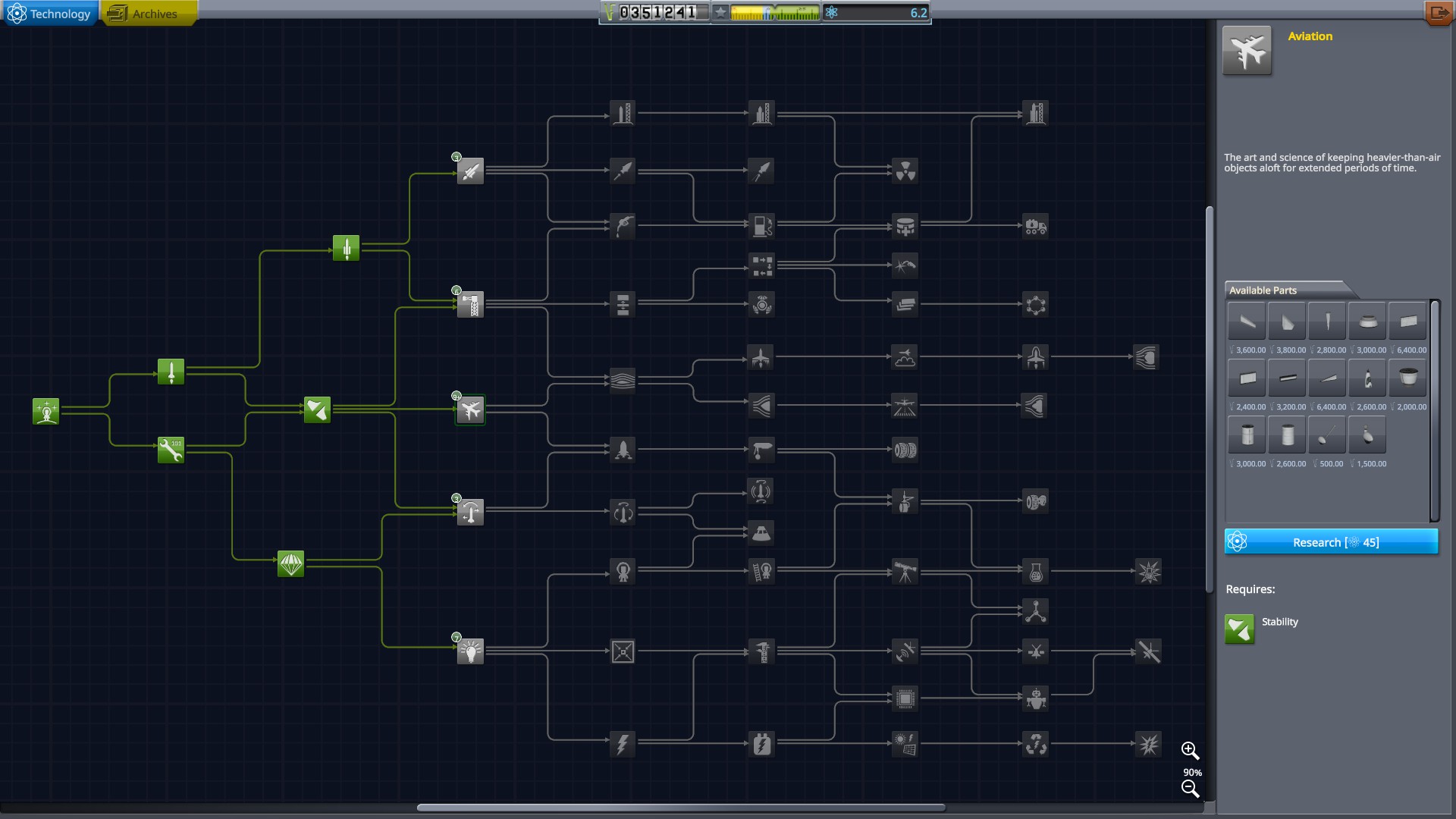 The final game mode is sandbox mode, which unlocks all parts at the start and removes the need for money, science, and fame. There are no missions or predefined goals at all in this mode; it’s a true sandbox.

In all modes, the game’s scope and physics are its main draw cards. If you have any interest in space simulations, orbital physics, or rocket or spaceplane engineering, then KSP should immediately grab you. Only once you understand the basics do the size and openness of the game’s sandbox become apparent. For example, my current goals are to build my first space station and set up a geosynchronous satellite network around Kerbin. Then I want to build a station on the Mun and build a large interplanetary vessel to take remote-controlled rovers to visit each of the other planets in the solar system. All of this is doable with time and effort in the base game, and that’s not even considering the many user-made mods that are available.

Of course, the game isn’t perfect. Apart from the few minor issues already mentioned, it seems to me that spaceplanes are a bit of an afterthought; there are no tutorials featuring them, and they just don’t seem to be as well integrated with the rest of the game as the rockets. The interface also has a few quirks, like not letting you visualise objects you selected on the map when in flight mode (and requiring reselection of them again when you return to the map), making some of the trickier orbital manoeuvres more fiddly than they should be. 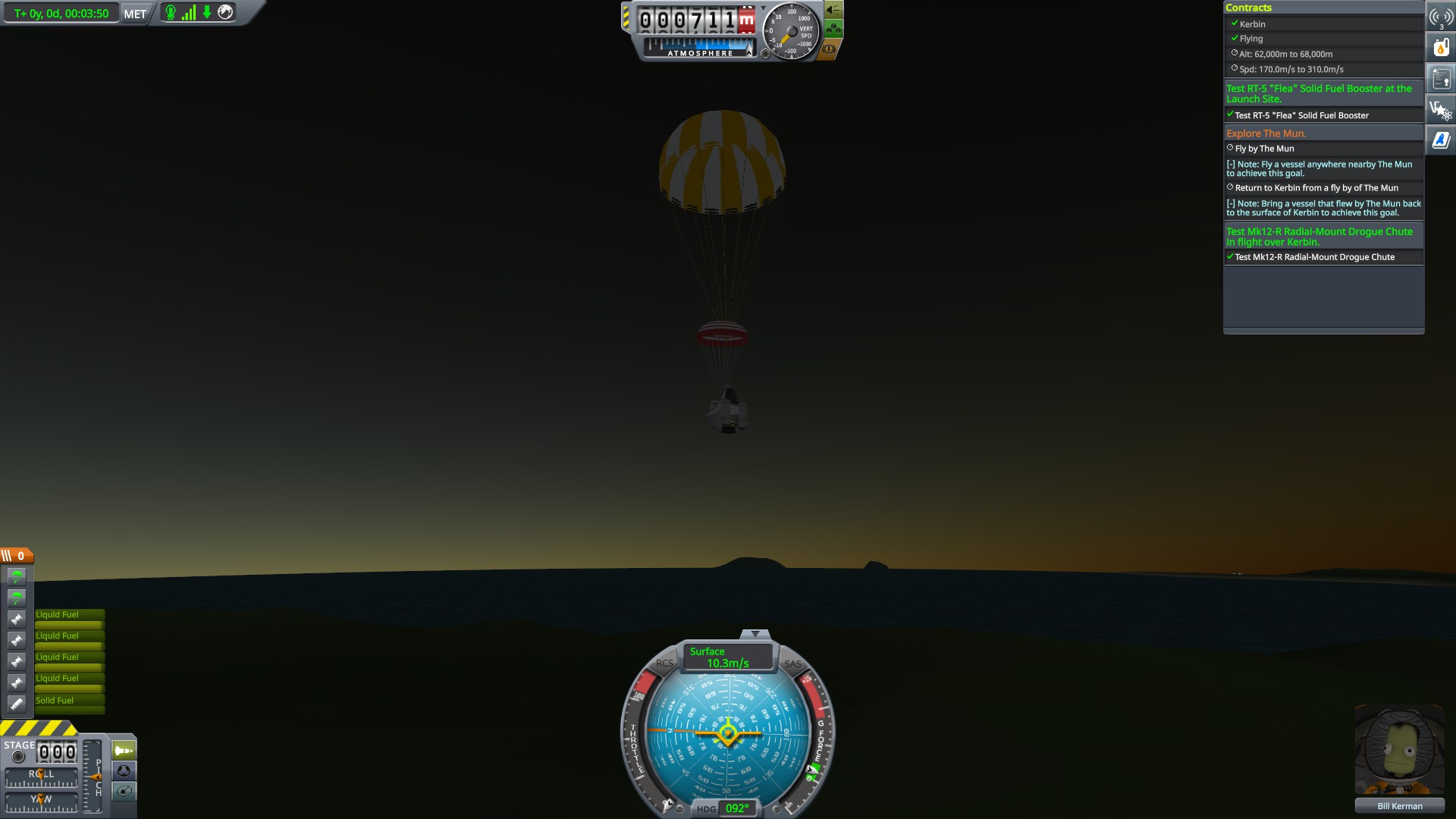 Pros:
+ Huge sandbox with detailed physics
+ So, SO much to build, see, and do
+ Trading Cards

Kerbal Space Program is a wonderful space sandbox. There’s so much to do, and what initially looks like a very long and steep learning curve is actually not as bad as it seems. If you have any interest in space simulations then you should definitely pick it up. Just don’t let it take over your life. 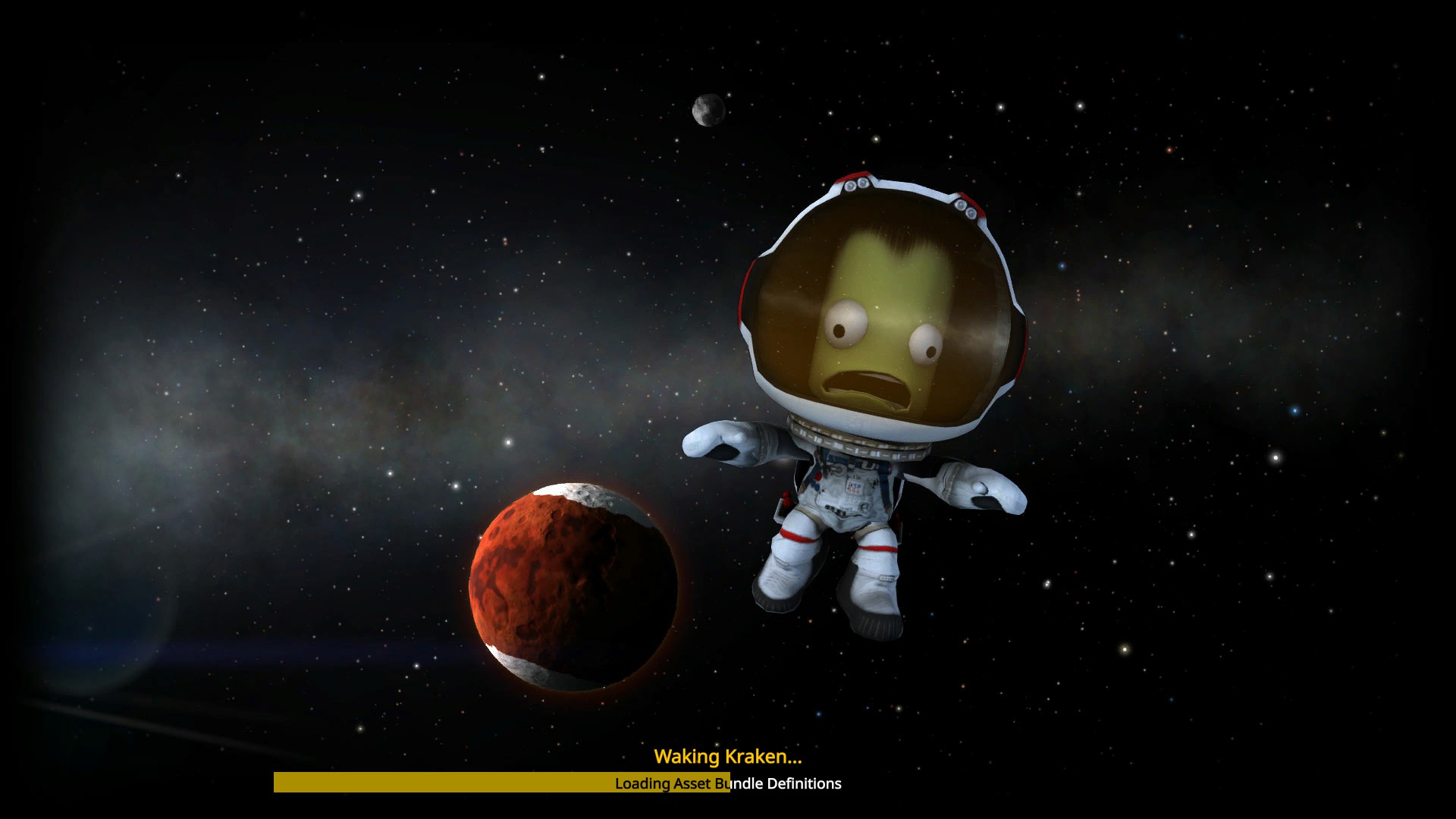