A real-time 4X space strategy game that throws free play out of the window for pre-defined missions. Sounds interesting, but how well does it excute all this?

Dawn of Andromeda showcases a series of missions called “Eras” that portray an intergalactic fight among space-faring nations with each Era having its own context and pre-defined objectives. Dawn of Andromeda uses these missions as a storyline for players, featuring the ascension of humanity into a galactic empire and conflicts fought against other sentient species. Each Era objective is self-contained, where player actions and changes to the environment do not carry over to the next one. During the first Era (minor spoiler) humanity is greeted by friendly Sythons with words of friendship and promises of co-existence which are later betrayed, forcing on players the troublesome task of surviving for two years.

While humanity may have had a troublesome first encounter with the Sython, a common foe twists the plot and forces them into a last stand alliance to defend their homeland and the very survival of their species.  Dawn of Andromeda gives up the free play “build your own adventure”-ish mechanics other games have for these pre-defined Eras missions, focusing mostly on the story. Whether this was a good idea or not depends on one’s expectations. 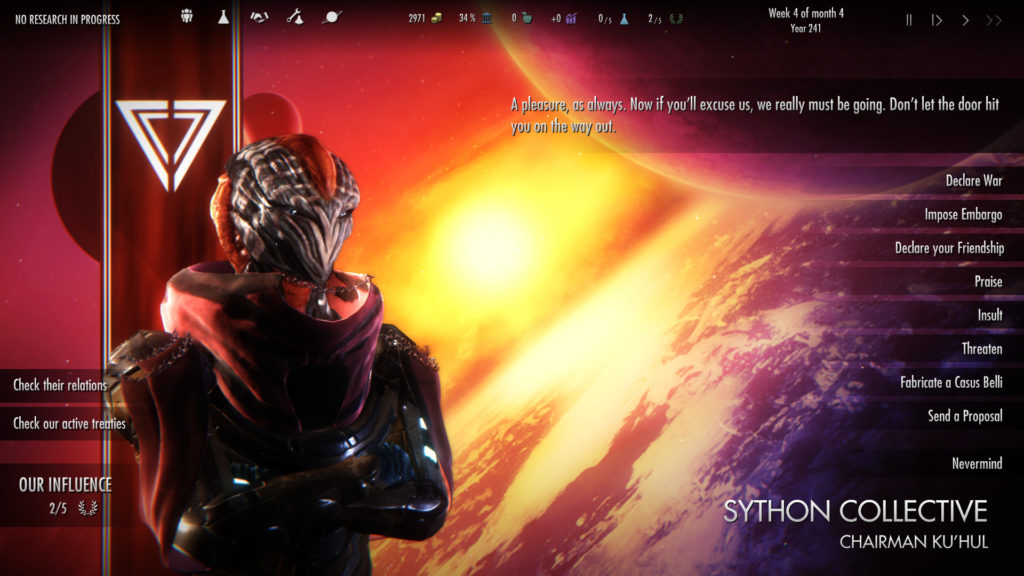 Dawn of Andromeda recently left Early Access on May 4th after “several months successfully in Early Access”. Thankfully the game is singleplayer only, otherwise, a number of players would make for a very boring experience. According to SteamCharts, the average number of players in the Last 30 Days were 4.6 players, a very low amount for such a nice-looking game that definitely took some effort. Of course, during its Early Access period, it did not do well either with player counts, with previous months having even fewer players on average, hitting the lowest in March, with 2.9 average players. One may argue that the game is dead, but it was never alive. Not that this is a problem for a singleplayer experience as the player base won’t harm gameplay, but it is an indicator of the people enjoying the game and that further development of content is unlikely.

Nevertheless, Dawn of Andromeda is different from other offerings in the market with simple gameplay focused on storytelling rather than 4X strategy. Dawn of Andromeda did manage to handle the storytelling nicely, with those pre-defined missions helping shape the narrative course.  However, do its mechanics manage to keep the experience fun for 4X fans? After all, it targets a 4X market and instead offers storytelling. How well will it please 4X fans?

When comparing Dawn of Andromeda to other 4X space games, such as the hit Stellaris, it is clear that Dawn of Andromeda uses much simpler mechanics than the latter, with one good example being planetary invasions. When playing Stellaris and starting a planetary invasion, ground troops will be needed to further secure the planet after orbital bombardment has gone its course (what takes time). On the other hand,  Dawn of Andromeda only uses a quick orbital bombardment to take control of a planet without the need for a ground invasion or anything of the like, making the simplistic mechanics obvious to any 4X player. 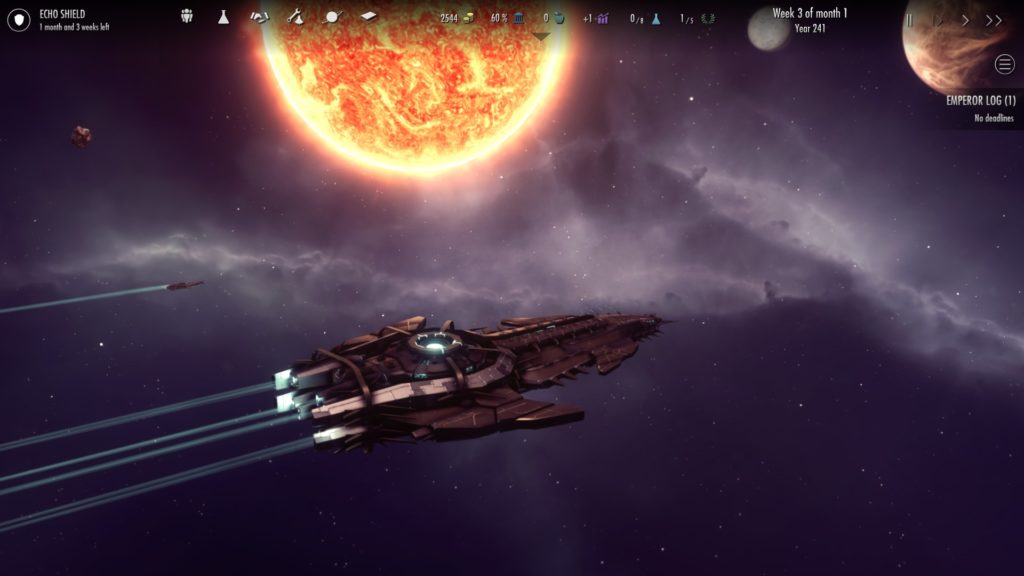 Instead of featuring multiple different resources for building fleets, all it uses is in-game currency, called Credits. While playing Stellaris and other similar games one may need resources such as “ore”, “energy” or something similar. In Dawn of Andromeda, all it takes are Credits that take ages to collect and do not have a clear indicator of where they are coming from.  Surely, the planet may be taxed, but what commerce or buildings are being taxed?

Dawn of Andromeda does not feature direct building for planetary structures, but rather ‘investment points’ which can be focused on five trees, giving production buffers to the planet. This way, instead of building, say, 10x “Housing Block I”, players allocate investment points according to need. Not only is this unclear and not immersive, it makes the game even more simple in comparison to other 4X games, keeping away 4X fans looking for a more complex experience. Another problem regarding investment points is that they cost in-game currency, which is hard to get and used for pretty much anything due to a lack of other resources. Instead of having “ores” that may be allocated to construction, credits are used. The very same credits that are used to keep fleets working and at top efficiency.

Fleets are an overstatement, as what one may actually manage to gather are a dozen ships at best due to their high costs and they do not work as groups. They have to be either selected individually one by one or taken by dragging the mouse and selecting them all at once. Of course, this is nothing like other major names of the 4X genre, such as Endless Space. In Endless Space, there are cohesive fleets that work as squads with actual admirals assigned to them, giving them a boost that significantly helps to combat against A.I or whatever is being faced. Dawn of Andromeda has another simplistic point in fleet mechanics and combat, with combat being very dull as both “”fleets”” stand at each side firing at each other until the side with most ships wins.  There is no actual regard to countering armor or the like as is done in Endless Space and Stellaris. Even though Dawn of Andromeda does feature a ship designer, it’s usefulness is limited as pre-defined missions do not require going such lengths and it’s pretty much a redundant feature. In the ship designer, it is possible to modify designs or create new ones using researched technology, needing to respect the ship’s “maximum tonnage”, similar to Endless Space.  Stellaris also has a modification limit but uses Energy and reactors for balance. 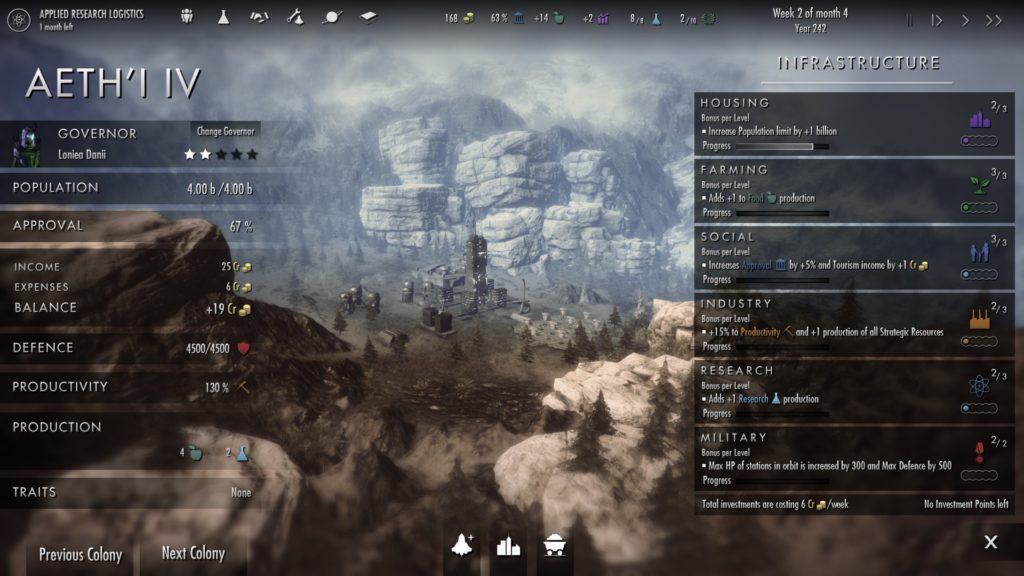 While Dawn of Andromeda does have multiple factors that hinder its ability to be attractive to 4X fans (seriously, Endless Space Collection is way cheaper and way more complex!), not all its mechanics are bad. If there is something the game completely nailed in a good sense, it is diplomacy. Dawn of Andromeda‘s diplomacy has important advantages in relation to Stellaris. For example, in Stellaris diplomacy is really dull and simplistic, with useless federations. In Dawn of Andromeda, players can pay small faring states in order to wage war against another, or pressure them into waging a proxy war using an “Ultimatum”.  In an “Ultimatum”, a nation can use its own resources in order to pressure another nation into accepting its terms under threats of doing something, so the extortion of weaker nations is possible without a need for war. In this regard, Dawn of Andromeda does not lack. This is specifically useful during Eras where Sython and Terrans are at a stalemate and having smaller nations fight proxy wars does help turn the tide.

A negative point to keep in mind, though,  is how colonizing is uncertain.  There is no clear indicator of whether or not it’s going to succeed. Indeed, while the game’s interface may claim the planet is colonizable, once the colonists land they may suddenly die for a vast number of reasons. Of course, this is a realistic mechanic but due to no clear indicator of the probability of such catastrophe, it turns into something negative and does not help make the game more fun.

Last, and not least, is Science. Science has to be the most simplistic aspect of Dawn of Andromeda, with one “Science” resource responsible for tech research, unlike Stellaris and Endless Space where multiple “Science” resources are used for different research trees. For example, Stellaris has Society, Physics, and Engineering and Endless Space has Science, Industry and Food (FIDS). Each one of those resources is responsible for researching a certain tech with a distinctive aspect. Society. in Stellaris for example, can be used to research society. Food, in Endless Space, for Dust, the in-game currency similar to Dawn of Andromeda‘s Credits.  Meanwhile, Dawn of Andromeda only has one scientific resource, a generic “Science”.

While Dawn of Andromeda may have its share of negative and positive points, it makes up for that with content. Whether or not the content will please depends on how well the simplicity of the game is accepted, with a chance of the storytelling to fall into a repetitive loop.

The game features 8 Eras, with an increasingly difficult objective. Players looking to enjoy the story and ignore the sheer simplicity of the mechanics will notice that most people have not gone past the first Era.  If the global achievements are to be taken into account, According to the Global Achievements, only 2.5% of players have beaten the first Era. Why? Likely because of the difficulty. The game does not have configurable difficulty settings and players will often have to replay an Era as it is not forgiving. The average time to beat, according to my own assumptions, would be 1 hour per Era, with the eventual replay.. A good guess is the game would last about 10 hours.

Dawn of Andromeda is relatively fun but does not manage to break any new ground and will likely not please 4X fans due to its simplicity and may not please those who simply listen to story telling due to it’s rather unforgiving AI. The lack of content and mechanics is not justifiable, with significantly better games such as Endless Space 1 for the same price. While not inherently bad, Dawn of Andromeda cannot be rated anything more than a Pause as there are good bits that were overseen by bigger games (such as its diplomacy gameplay), but the major lack of mechanics makes it a bit boring. Buy this game on sale and do not jump in with high expectations.