CRYPTARK is a new indie entry in the popular science fiction twin-stick shooter genre. Suit up!

CRYPTARK (all caps, according to the Steam store page) is a new science fiction twin-stick shooter with rogue-like elements from indie studio, Alientrap, developers and publishers of a number of reasonably well-known games including Apotheon, Capsized, and (long-term Early Access) Autocraft.

In CRYPTARK you play a privateer (seemingly called ‘Pioneer’ in game) who has taken on a contract to work your way through the floating space hulks of a derelict alien space ship fleet, disabling them as you go, until you reach the ‘Cryptark’ in the centre. There you must recover an extremely valuable artefact.

Each derelict hulk is procedurally generated, with various systems and organic alien and electronic defenders suited to its type. But each hulk has a central cortex system: the brain of the ship. Destroy this and all of the ship’s defenders are killed or disabled, and the ship is yours.

CRYPTARK doesn’t have achieving your goal by boarding discreetly and creeping along hallways, stealthily dispatching aliens and stealing artefacts as you search for the cortex. Instead you’re in possession of an expensive exoskeleton suit, equipped with deadly weapons and powerful devices, and you simply fly in and start kicking alien butt!

CRYPTARK is played in two dimensions from a top-down view, as is common for the genre. The graphics in CRYPTARK seem to be heavily inspired by the works of H.R. Giger, with the alien spaceship hulks and enemies looking like blend of metallic, electronic, and organic. It’s sometimes quite hard to see what’s going on, with many enemies blending into the walls when they’re not moving, and this is especially true when the close-to-death filter has been applied, darkening everything. Everything does look consistent and is animated well; I just wish there was a bit more variation between the different types of ship.

Your ship (seen during load out selection) and character are neat and well detailed, and provide a good contrast to the alien ships. Even after hours of play I still can’t work out what, exactly, your suit is supposed to look like when you’re outside the ship and in space; I’m guessing it’s some sort of Robotech-like transformation. Your crew and employers are shown in little video windows, which are well done and a nice touch. 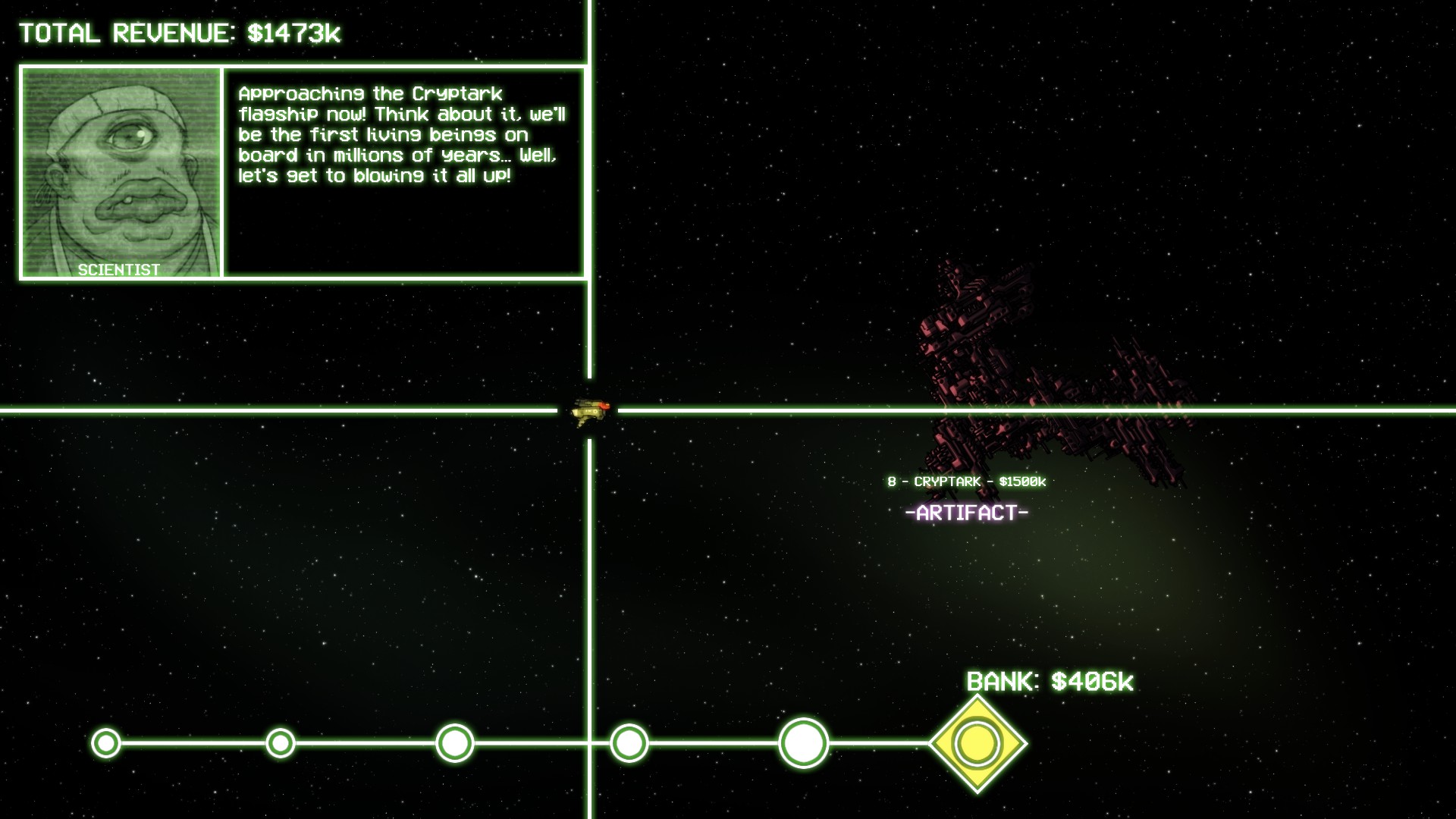 Weapon effects are excellent and contrast well with the darkened derelicts, with convincing associated dynamic lighting. There’s a good variety and they’re mostly pretty satisfying to use.

CRYPTARK’s title music is very nice, with an electronic sound that reminds me of something from Jean Michel Jarre. The in-game music is much heavier, with some bits reaching towards a metal sound, which is less appealing to me, but it’s all very well produced and suits the action pretty well.

Sound effects are good and weapons sound appropriately destructive, adding to the satisfaction of dealing flaming death to the alien hordes, but a more obvious sound when you’re taking damage would have been nice; sometimes I was hit a couple of times before I realised. When you exit the confines of a ship and enter the vacuum of space everything goes completely silent, which is a pretty cool effect.

The game includes a fully voiced script, minimal though it is. The voices are well normalised and sound professional, with a good range across the different characters who contact you. A nice, calm female computer voice is always good, too, and CRYPTARK doesn’t disappoint there. 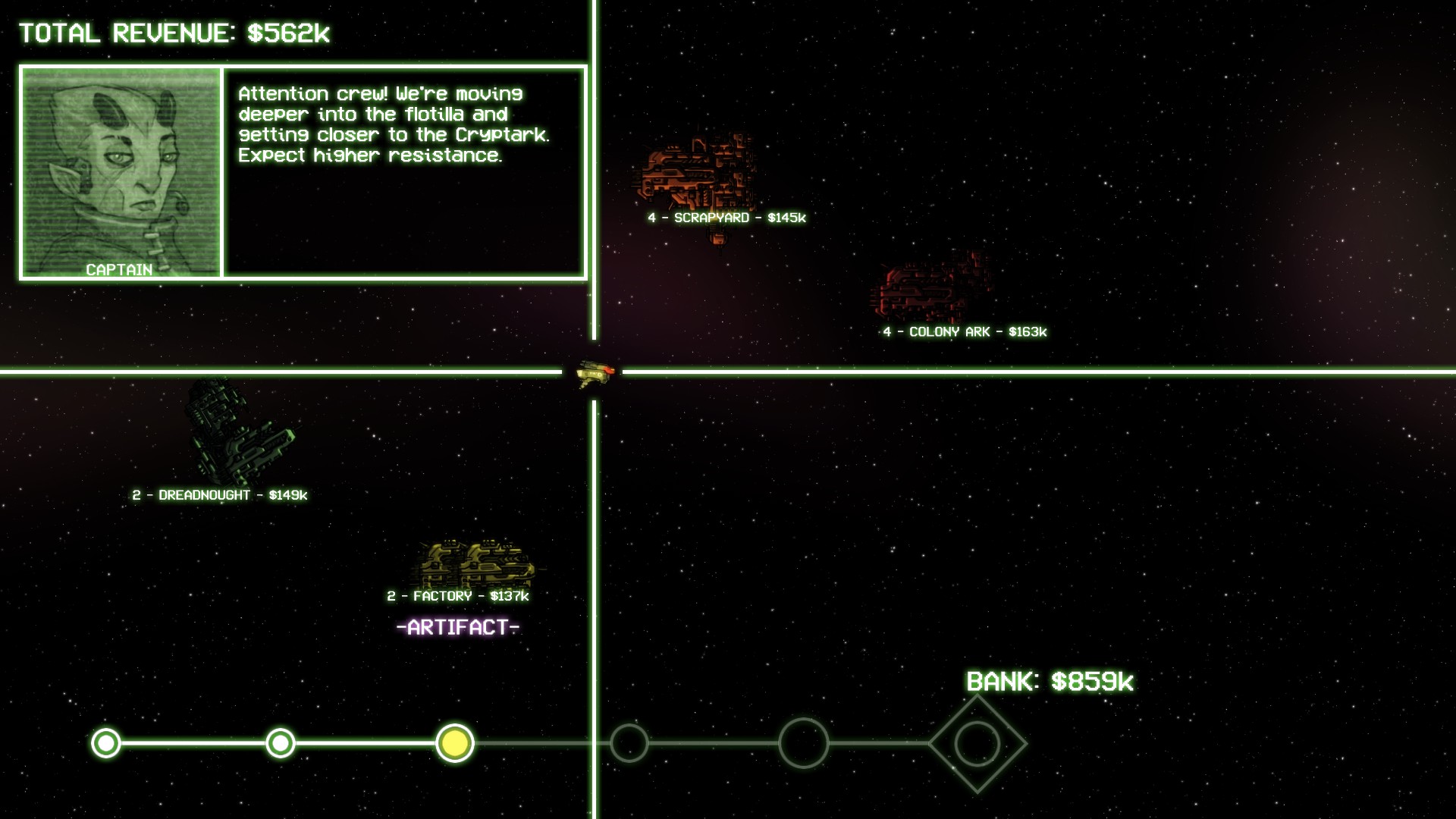 CRYPTARK is a fast-paced twin-stick shooter, and plays like one: your left hand controls movement while your right hand aims and fires your weapons. The game supports controllers, but as is usual for games in this genre, I’d recommend mouse and keyboard for improved aiming accuracy.

There are three core game modes: Campaign, Rogue, and Cryptark Evacuation. The third is only unlocked after you’ve completed the other two, so I have no idea what it involves.

Campaign mode starts you with $500K for expenses at the outskirts of the alien fleet. You’re given a choice of four hulks of different types to salvage, each with its own systems and defenders, and three special requirements that will earn you bonus cash if you fulfil them. You choose your load out and enter the ship, only leaving once you die or destroy the cortex. Ships include a number of technology modules that, when collected, unlock extra items or weapons for you to equip on subsequent missions. These only affect your current game, though; when you restart the campaign you’re back at square one. If you’re lucky you may also have an option to capture an artefact by fulfilling a certain requirement on one of the ships. 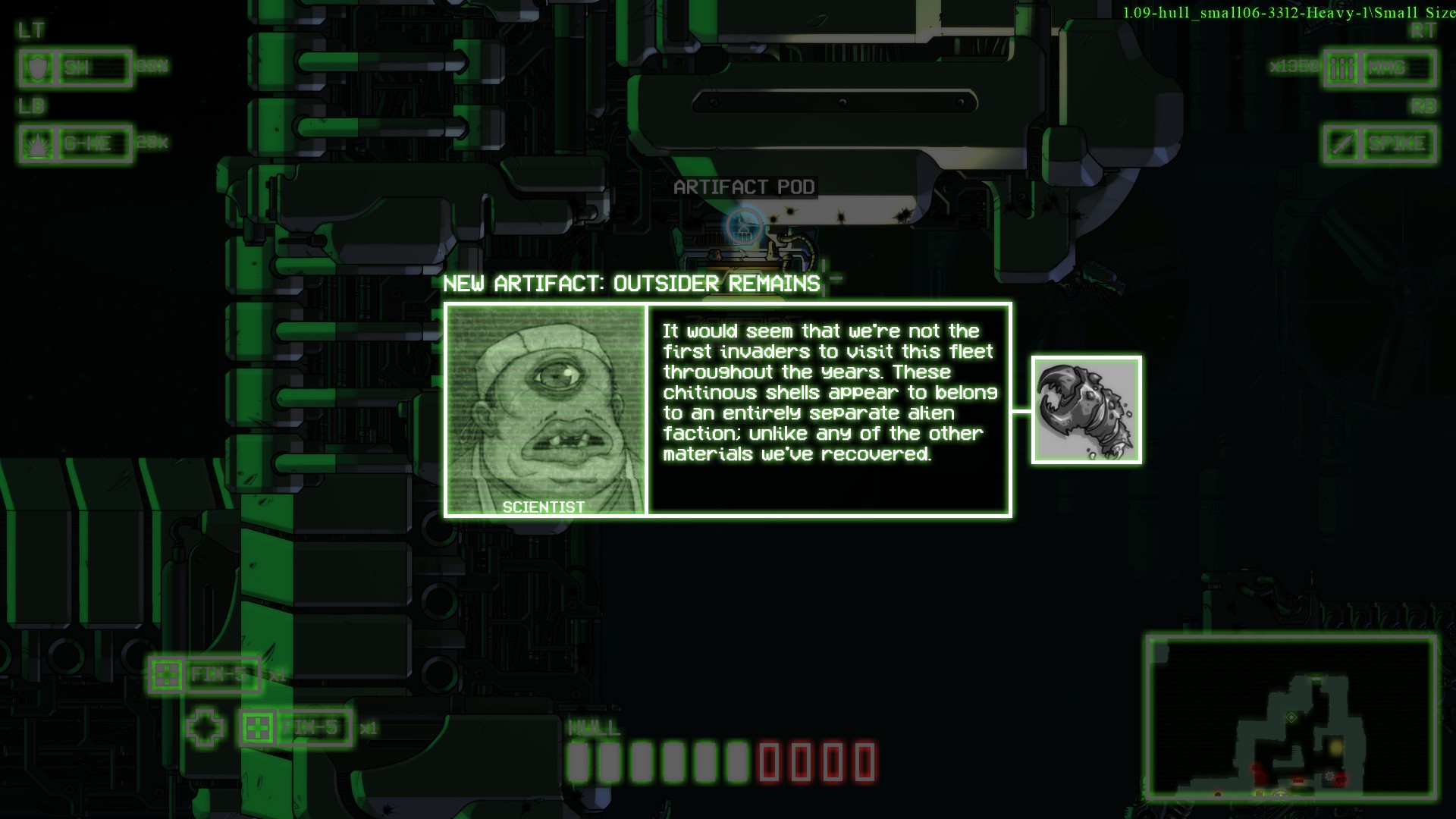 Campaign mode can be played with a friend in co-op mode as well, but only dual-controller on a single PC is supported; you can’t play keyboard and mouse and controller, and there’s no network-based multi player.

Rogue mode sees you out on your own in the fleet, ahead of your support ship. You have a full complement of weapons and items, but no choice: they are defined by your selected suit. In this mode you don’t buy items or re-equip in your ship; instead you may come across weapon and item modules on the hulks, enabling you to change your load out on the fly. Each subsequent ship sees you starting with the health, ammo, and items with which you finished the previous, and die once and it’s game over. So it’s worthwhile stocking up on health and ammo before you destroy a cortex.

In both modes, your aim remains the same: take out the central cortex system and the ship is yours. 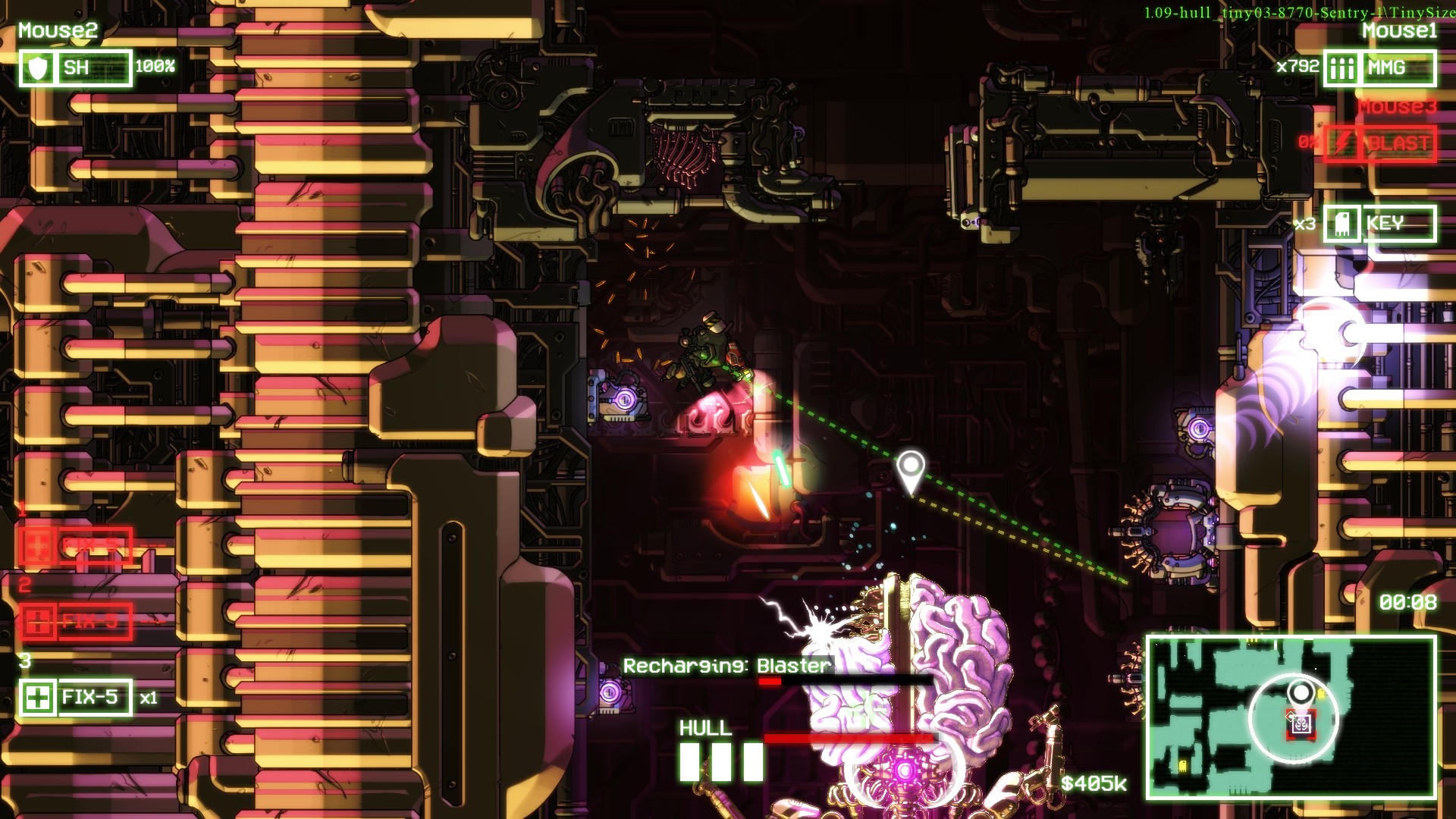 There’s not a whole lot of lasting progression. Artefacts you collect in any game mode are used to unlock extra suits and skins, and that’s it. Each suit has a standard load out for Rogue mode and an ability. The starting ‘gunhead’ suit has four weapon and four item slots, and up to 10 hull (health points). Its ability is a not-that-useful boost, which can move it a short distance quickly in a desired direction. 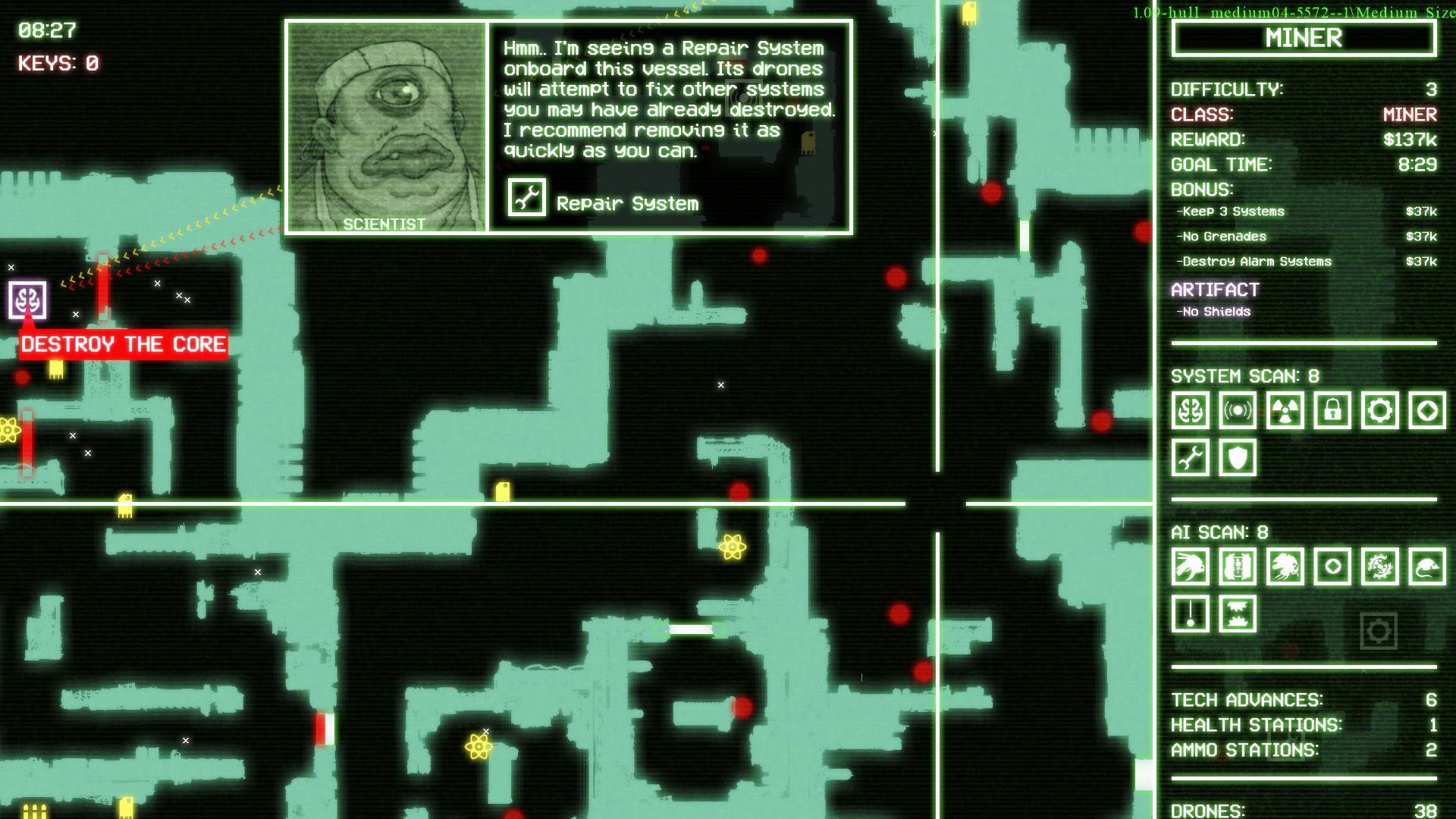 Initially I didn’t find CRYPTARK that much fun, but it has been growing on me the more I play. I still have a number of minor gripes, though none of them are game breaking:
– the controls feel a bit slippery; movement is better with a controller, but aiming and shooting is better with a mouse
– enemies sometimes spawn right next to you or behind you in areas that you’ve cleared
– there’s no mouse control of the cursor on the map or ship selection screens
– some ship bonuses are mutually exclusive (e.g. kill this system and keep the same system)
– waypoints produce really bad paths, as if the resolution on the pathing is too low
– some text is too big for UI windows
– bugs: shuffle system can trap you if you’re too close to a system when it shuffles, losing the level; game froze when starting a mission (had to kill it from task manager); artefacts occasionally don’t drop even if you’ve completed the mission with the stated requirements; nuke systems don’t always damage enemies within the blast radius
– grammar errors in the in-game text 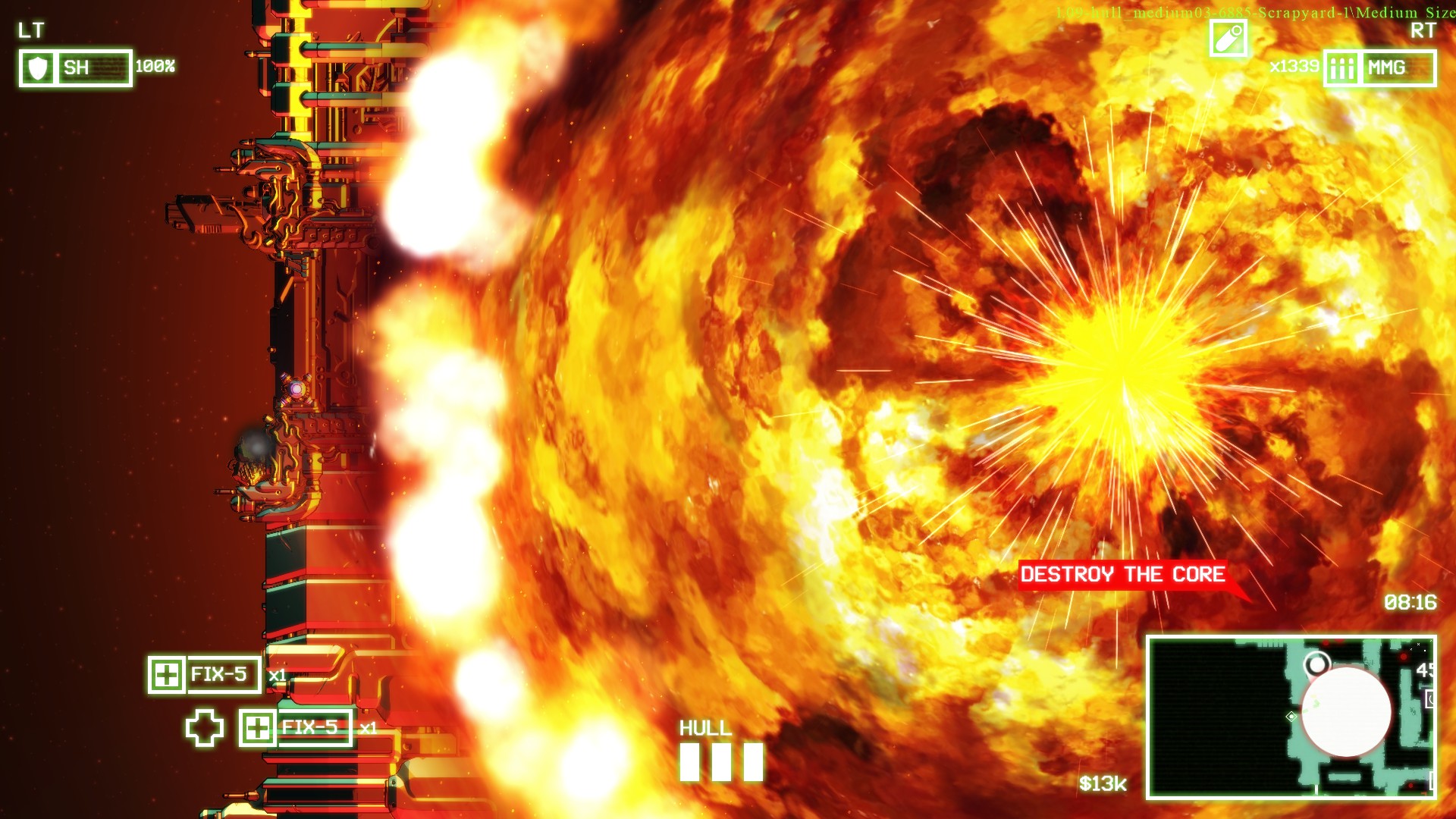 CRYPTARK is a fine science fiction twin-stick shooter with a few small issues and a lot of destruction and fun. Pick it up; you won’t regret it. 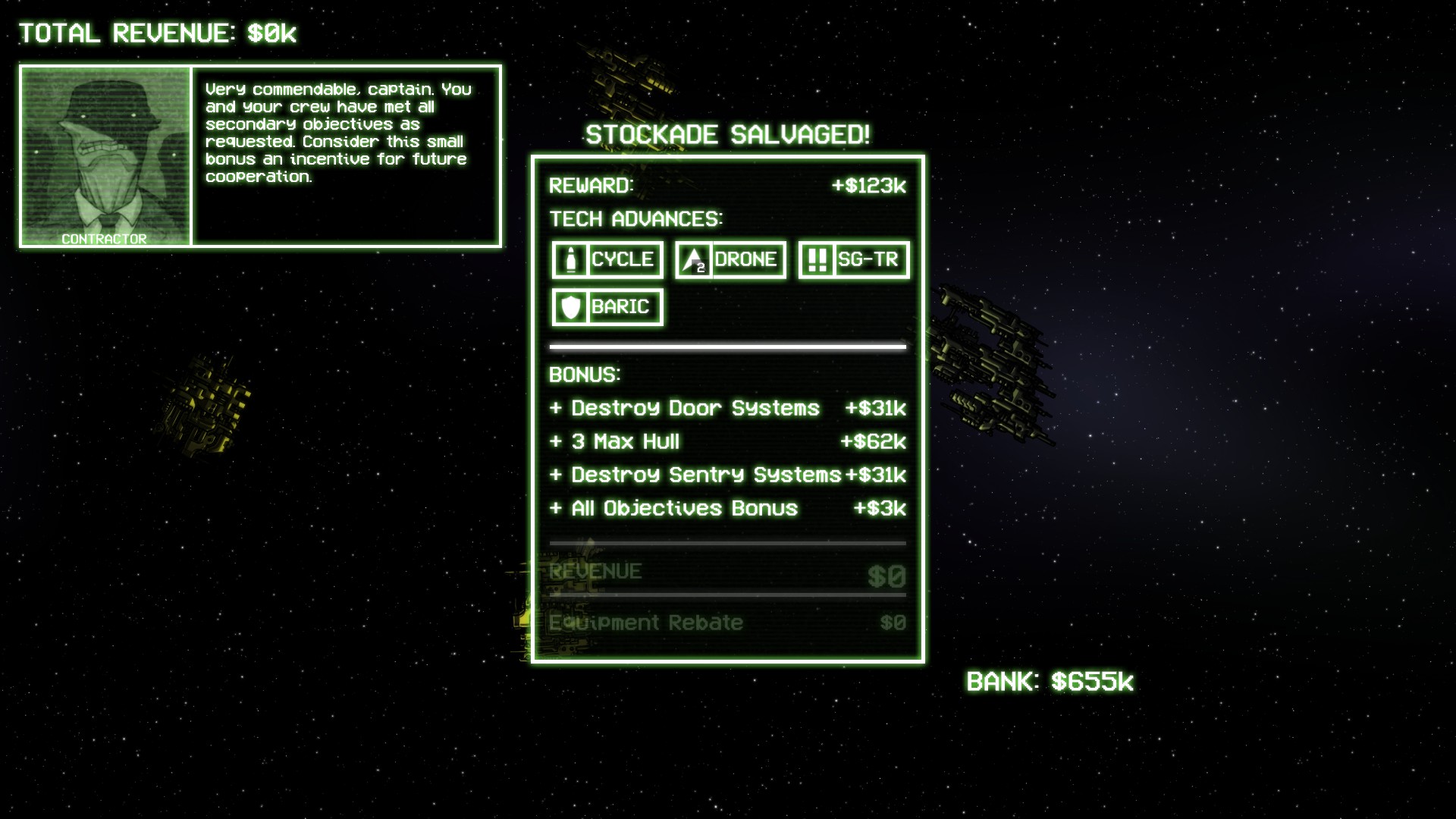