Hover: Revolt of Gamers is an online-only multi-player parkour revolution set in a futuristic neon city.

You begin the game as a fresh clone in a deserted laboratory, with a couple of oddly named people talking to you over some sort of communication link. With the help of some holographs, they teach you the basics of controlling yourself and, in the process, lead you out of the laboratory into Hover City.

Hover City is a walled city built more vertically than horizontally, with the sewers, dump, and lower class hovels at the bottom, and the wealthy, bright, and beautiful houses at the top. Here you meet a number of Gamers, or their clones, and gradually learn to become one of them, joining in their fight against the oppressive anti-leisure regime, led by the Great Administrator.

Hover takes a cel-shaded, cartoonish approach to representing the game world, and it mostly works very well. It’s decorated everywhere with bright, garish neon colours and looks like a giant Escher-inspired 1980s video arcade (though without any gravity-bending illusions). 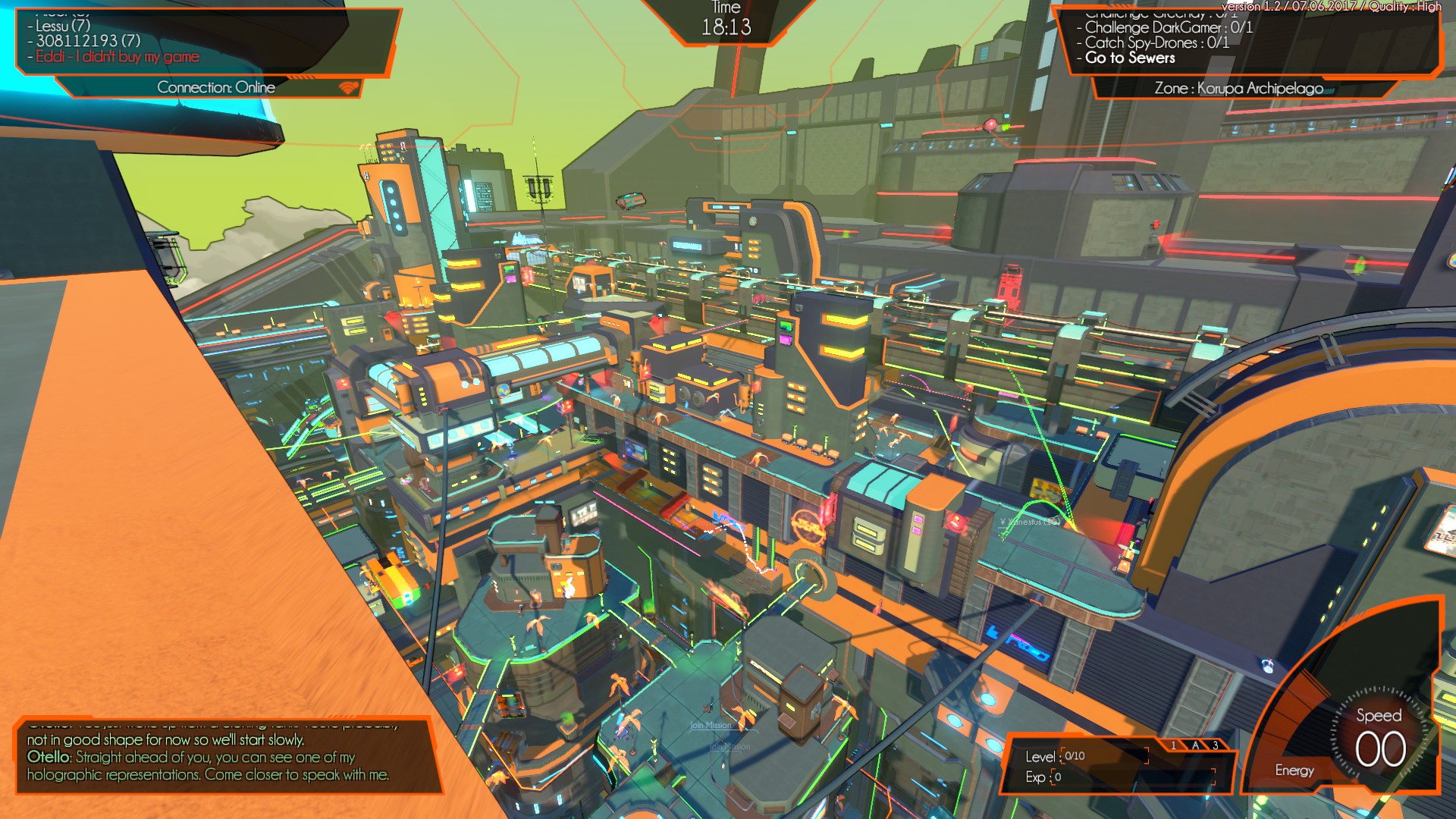 The citizens of Hover City are varied and interesting looking, though they’re just there for added flavour; you can’t interact with the vast majority of them. Similarly, the various buildings and scenery throughout the different zones of the city are different enough to be interesting, but with a common feel that ties them altogether. And lots of neon. Don’t forget the neon.

However, character graphics aren’t as impressive. Customisation is limited, essentially involving selecting a few colours from a very garish palette, and all characters seem to have bland textures and simple models. Given the work that’s gone into Hover City and the other locales, it’s disappointing that the same effort isn’t visible in the player character choices. The highlight is the neon trail that follows wherever you go, like your own personal Tron bike. 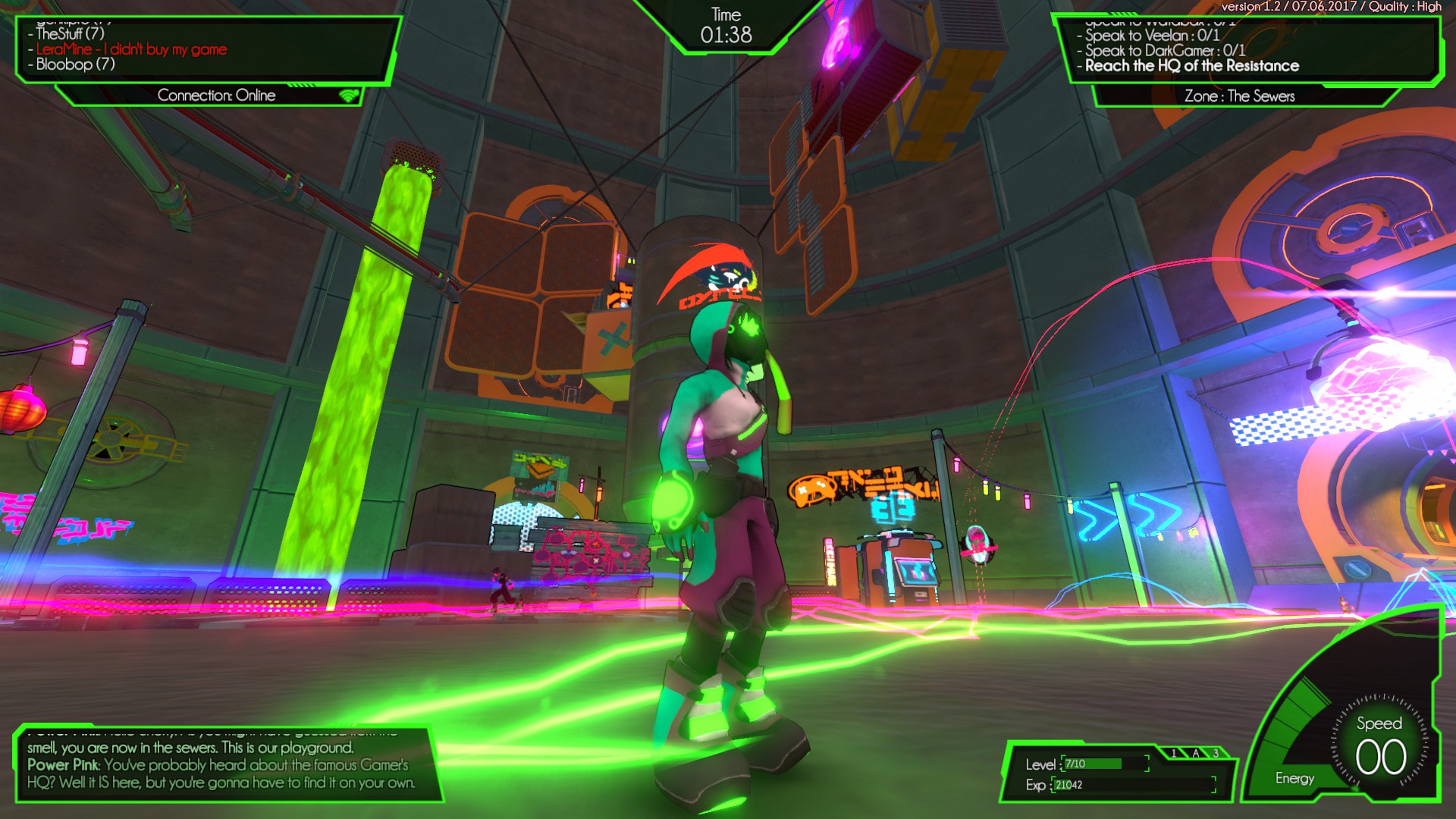 The animations are quite good, but limited in range, with only a handful of parkour tricks available. They look a bit slippery, too, as if you’re gliding along rather than actually connecting with the world, which is a shame for a game that’s so much about using the world around you to get to where you need to be.

The interface is good, with nice inertia to it when you fall a long way and hit the ground.

Sound effects in Hover are acceptable, but nothing too amazing. There are a number of beeps and boops from the interface at various points, and some ‘whooshes’ when you jump or hit speed-up plates, but no footsteps or other impact cues, further decreasing the feeling of contact with the world around you.

The core of Hover is parkour. The game presents you with a series of challenges of increasing difficulty, like quests in pretty much every MMO, and after a while they become about as interesting: chase x spy drones, graffiti over y propaganda posters, complete a race in z minutes. There are a few variations, but with no combat and little variation, Hover fills up the MMO quest bucket with running, jumping, chasing, spraying, and collecting.

It all seems a bit confusing at first, and I found myself overwhelmed for the first hour. The tutorial is limited and doesn’t explain many of the more complicated game mechanics, but I’m assuming that’s deliberate on the part of the developers; part of the game’s appeal is exploration and discovery. 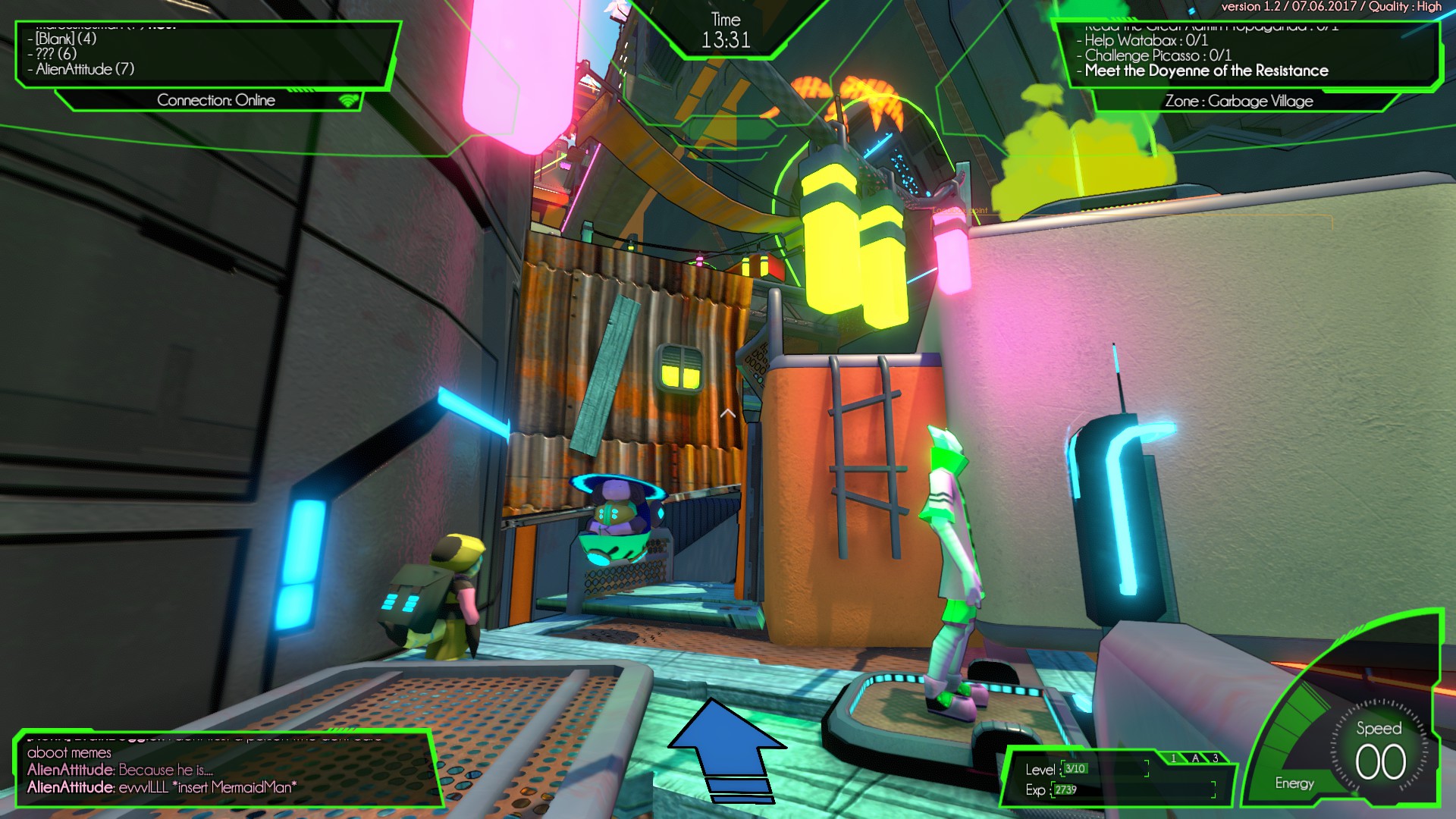 As well as racing and solving parkour-based platformer puzzles, Hover introduces gameball: a very basic team game where a ball drops and you need to run or throw it into your small goal, while preventing your opponents from doing the same thing. Once I’d worked out the basic controls, done a few races, made a few deliveries, and won a few gameball games, I realised the game really only has two modes: races and gameball. Oh, and gameball races. But it’s a lot of fun exploring the city. It’s just a shame it’s so repetitive doing the same two things over and over again to make any progress in the story.

The parkour is quite good most of the time, but frustratingly bad for the rest. Walljumps are terrible, with your character just as often jumping away from the wall as up it. To make it worse, the ‘auto grab’ that is supposed to happen when you reach an edge only kicks in half the time, often sending you falling back to the ground. You can’t die from falling, and you have a ‘rewind’ feature that somehow moves you through space (but not time) to where you were previously. This alleviates some of the frustration, but given that the focus of the game is parkour it’s a damn shame the controls are so slippery, and freedom of movement so elusive.

You earn experience points by doing quests and tricks, allowing you to level up. This unlocks a slot on your character, which you can fill with various augment chips that you find or win. These chips alter your base stats — speed, jump, grind, strength, energy, and hacking — or other derived stats, such as grind speed, friction, ball-carrying speed, etc. Better chips come from doing better in challenges, or from exploring the later zones in the game. But even in the dump at the bottom of Hover City, you can find some useful chips. 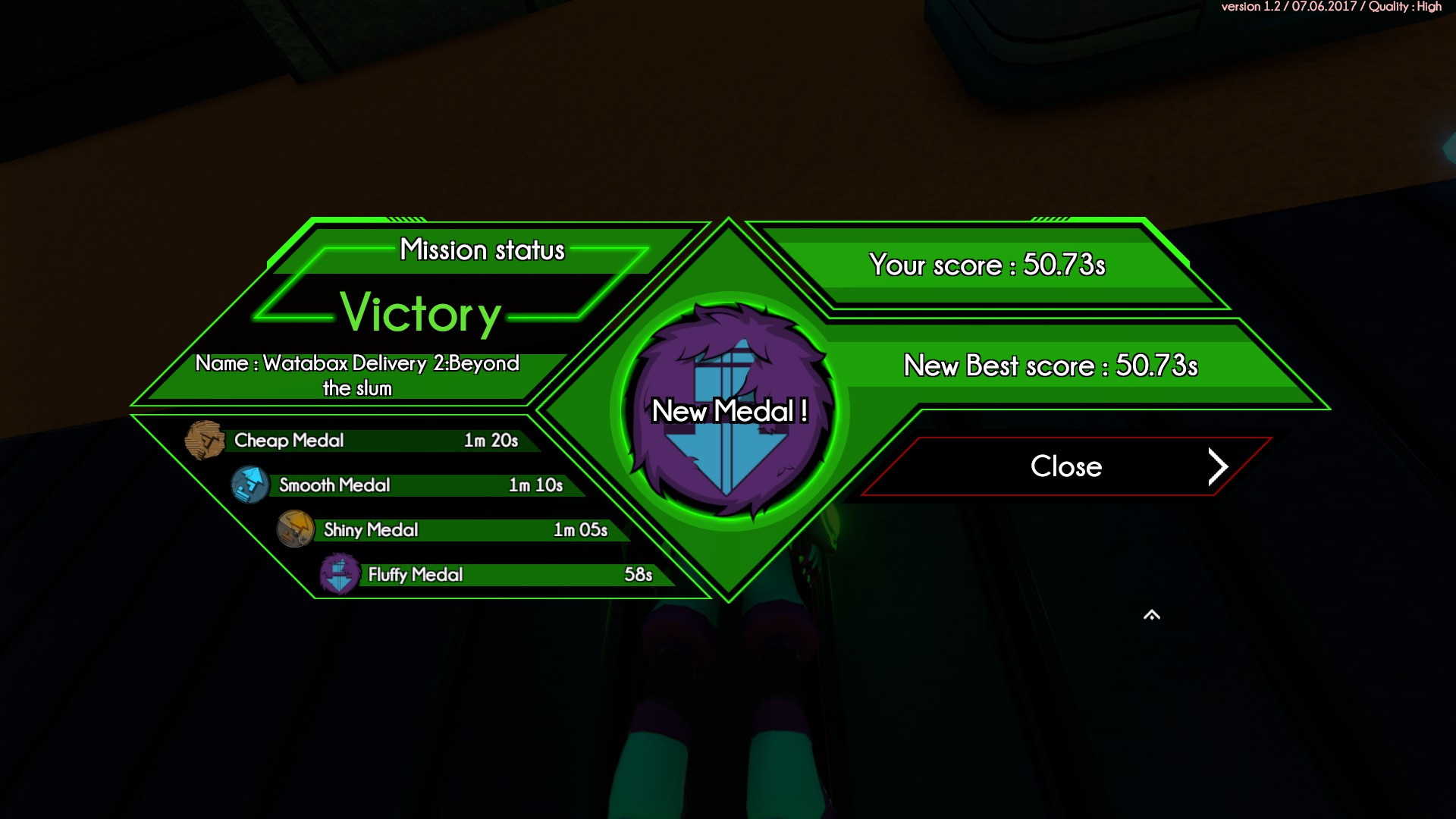 You can also unlock DNA kits of other gamers through completing challenges or following the plot, but you have to restart with a new character to make use of these, essentially increasing replayability through forced repetition. I’m not a fan of this model.

The game supports controllers as well as keyboard and mouse. Keyboard and mouse won out for me in all but the trick challenges. These essentially involve repeating the same few tricks over and over again as quickly as possible to rack up combo points, and ended up hurting my left little finger from mashing left-shift.

Hover is a multiplayer game, and can only be played online, but I’d just as soon play it as a single-player offline game. From my little experience playing with others, I had more fun on my own.

I encountered a few other issues with the game, too. There’s no map in Hover City, which is a massive pain for the first few hours of play. Some missions quit with no warning and I haven’t been able to work out why. This is especially frustrating when you’re doing well in a challenge and it decides to dump you out of it, not even telling you that it’s done so. The game crashed on me once, too. And the in-game text really needs some editing. 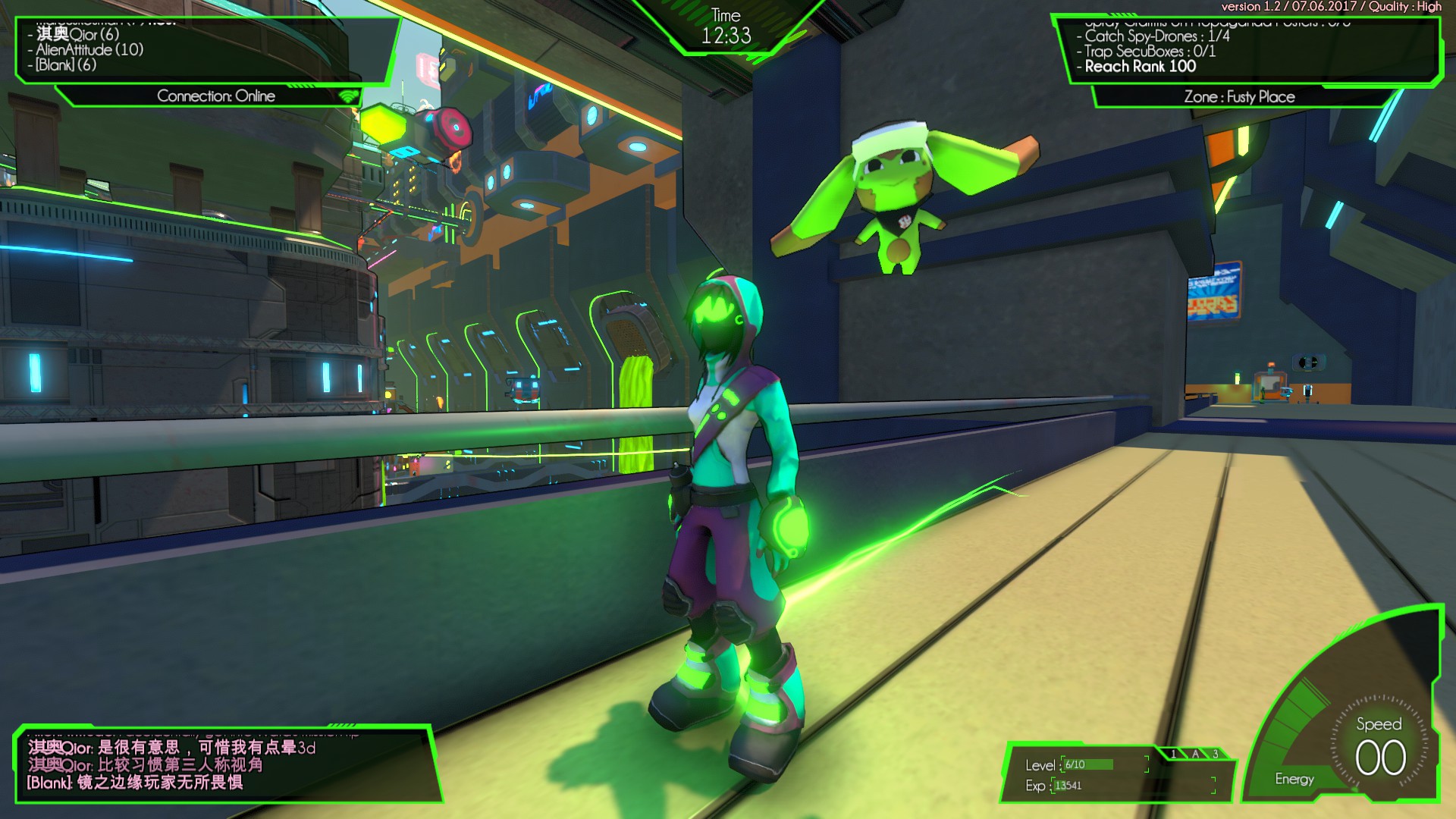 Hover: Revolt of Gamers is an interesting game. The setting is weird, but fabulously realised, and the parkour is a mix of rather fun and infuriating. If the controls were tightened, walljumps fixed, some of the frustrating plot missions toned down, and more variation in the world missions added, it would be a great single-player experience.

As it is, I’d recommend picking it up if you’re hanging out for a parkour game. Hover is fun when it gets it right. 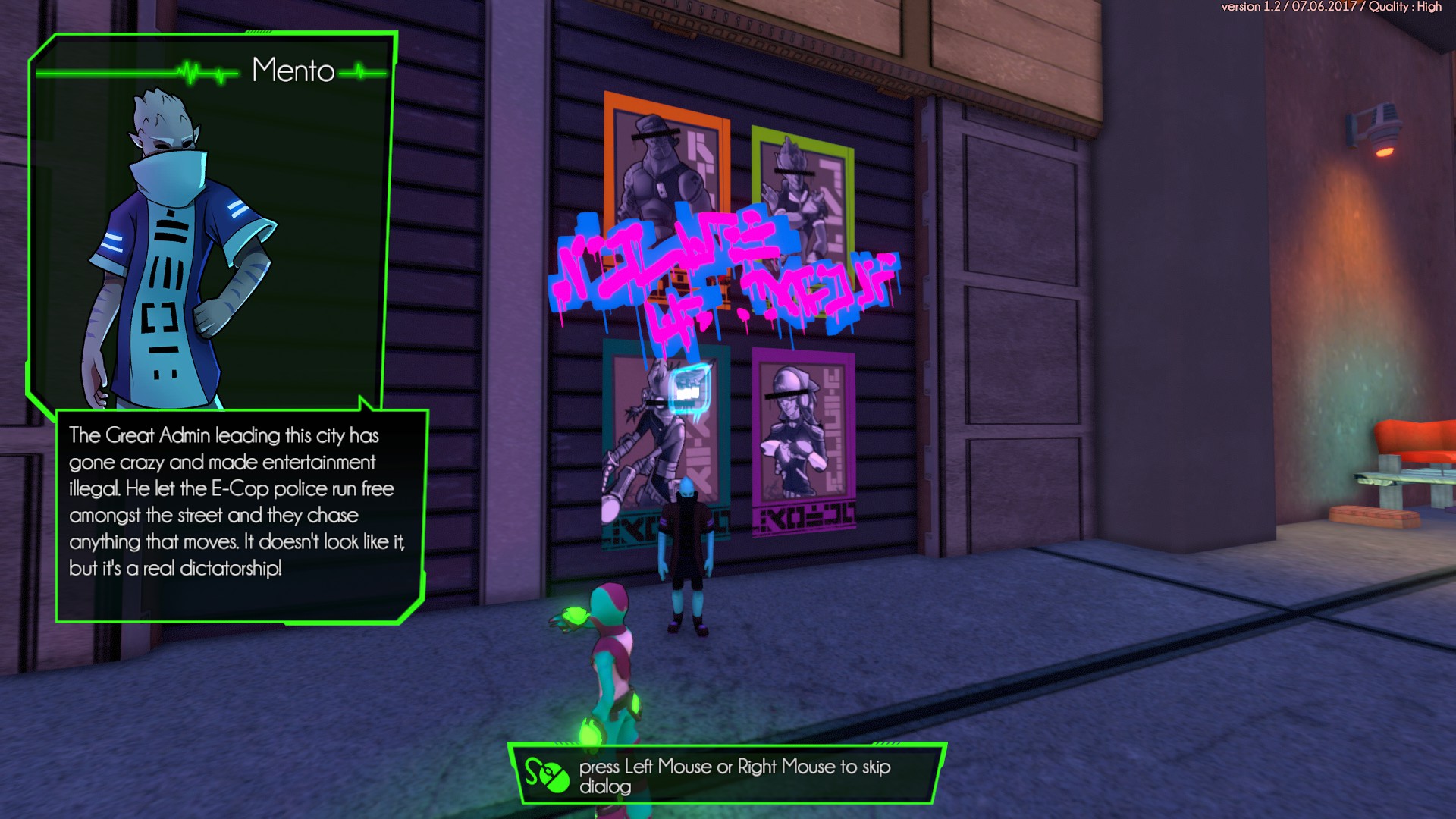