Nekopara is a cute anime visual novel about a family of catgirls and their owners. The fourth title in the series, Volume 3, was recently released on Steam.

When I was offered a key for the latest chapter in the Nekopara series — Volume 3 — I thought it would be a good excuse to replay the earlier chapters as well. And if I were going to be playing them anyway, then I thought I might as well review them. So here we are, with my Nekoparathon: Nekopara Volumes 0 through 3.

So what is Nekopara? “Why, it’s a cat’s paradise!”

More informatively, though, Nekopara is an adult-themed anime visual novel series from developers NEKOWORKs, and published by Sekai Project. The game’s claim to fame is its well-known catgirls — nekomimi, in popular culture — genetically modified human females, who are partly treated as pets and partly as valuable family members. They are human-sized and with mostly human looks, but with ears, tails, and very feline personality traits: part cat, but all girl (if you catch my drift). Catgirls are invariably attractive and affectionate. If you’ve spent any time browsing anime/manga image boards then there’s a reasonable chance that you’ve seen some Nekopara artwork, either official or fan-based.

Nekopara tells the story of the Maduki family. In particular, the game focuses on a young man, Kashou, his younger-still sister, Shigure, and their collection of six catgirls: Vanilla, Chocola, Cinnamon, Coconut, Maple, and Azuki. The series proper begins with Kashou moving out of home to start a bakery.

Though I believe Volume 0 is actually a fan-made production, I thought it best to start my Nekopara-thon here, since it is the first game, chronologically speaking.

In Nekopara Volume 0, you learn about a day in the Minaduki household, with Kashou not present — presumably in the process of moving out — and Shigure in charge of the catgirls. There’s no real story or plot; the game simply presents a series of scenes at times throughout the day, providing you with an introduction to some of the characters.

The story itself is non-existent. There’s no plot; rather just a series of scenes designed to introduce the characters. The script is mostly well written, grammar-wise, but much of the dialogue is pretty terrible, and it certainly wouldn’t win any creative writing awards. 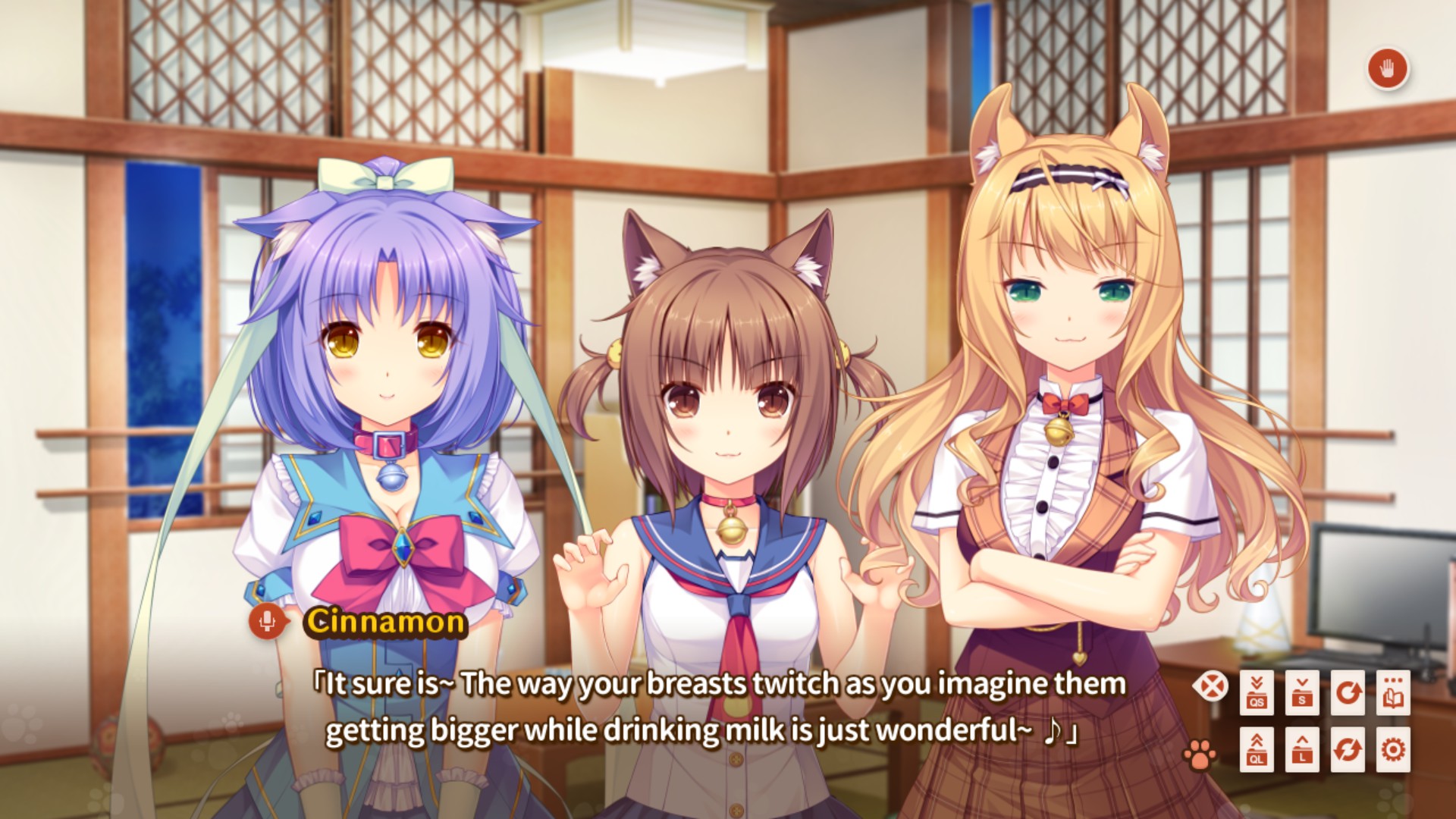 Volume 1 was initially the first entry in the series and introduces Kashou, a young man who has vacated the family home and moved into an apartment above his new bakery, Patisserie La Soleil. The game hints at various previous happenings in the family that have led Kashou to move out and attempt to start his adult life again on his own. While moving in, Kashou discovers that two large and unfamiliar boxes have been left in the bakery by the movers. When he opens them, he finds Chocola and Vanilla, the two youngest catgirls in the Minaduki family, waiting inside.

For various reasons, not the least of them being emotional blackmail, Kashou ends up keeping the two catgirls around to help with setting up the bakery, and chooses to hire them as the shop’s poster catgirls when La Soleil opens. He soon finds that to be legally employed or to travel around by themselves, the catgirls must pass a test and carry a bell-collar license with them at all times.

Volume 1 focuses on Kashou, Chocola, and Vanilla, in their efforts to open and run the bakery while also learning to live together. 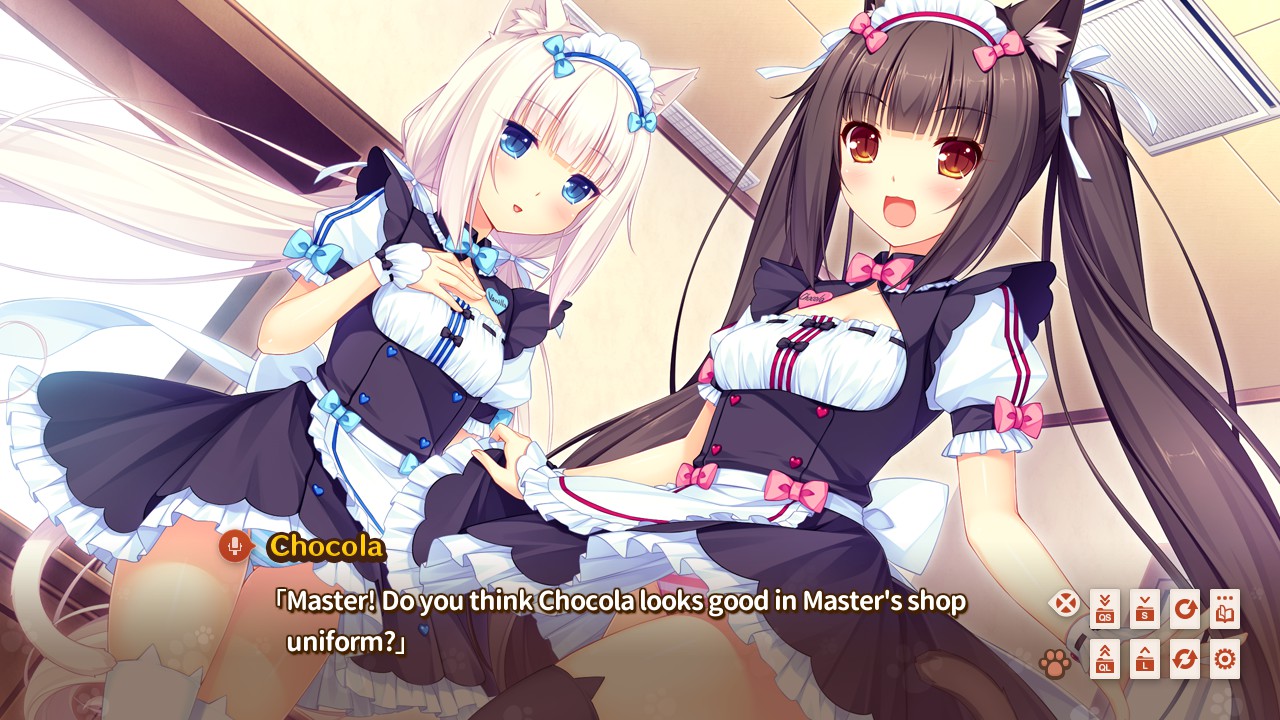 Volume 2 sees the bakery doing extremely well, causing the rest of the catgirls to begin working there, too. It becomes known unofficially as the Catgirl Patisserie. The catgirls (and Shigure-as-nekomimi) are running almost everything, with Kashou working hard baking and creating in the kitchen. Azuki steps up to the plate and begins managing the other catgirls, and it seems that each of them easily finds her niche except for Coconut. 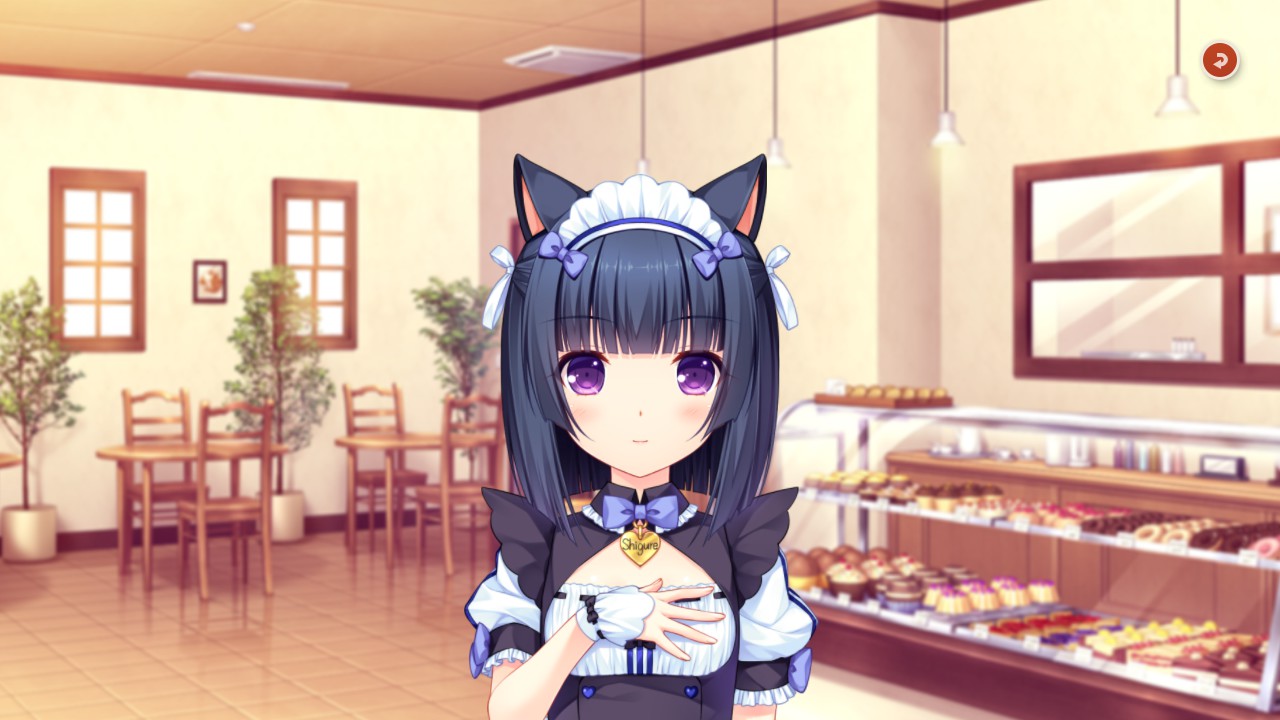 Though you see a lot more of Shigure and the other catgirls in this episode than the last — no longer just Chocola and Vanilla — this volume shifts the focus towards the large, strong, and slightly clumsy heterochromatic youngest sister, Coconut, and the small, bossy, and argumentative oldest sister, Azuki.

The actual story doesn’t progress much further in this volume, which seems much more concerned with character development than plot development. The lewdness of the script increases in this game, too, so even playing the normal Steam version without purchasing the adult patch, the game still steers very close to adults-only territory, based solely on the subject matter. 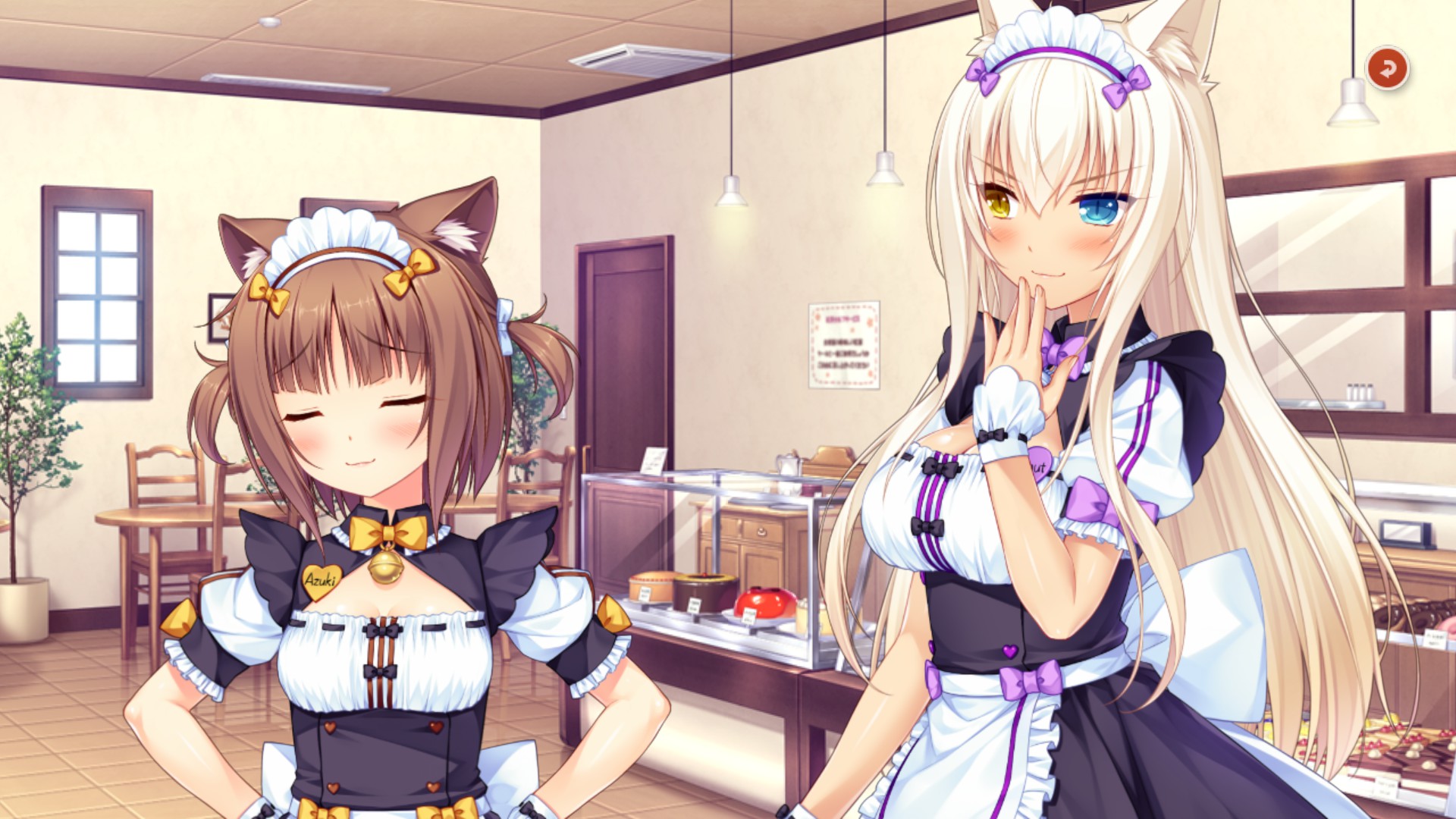 The bakery’s fame extends even further in Volume 3, with people coming from across the country to eat at La Soleil and be served by the Minaduki catgirls.

This volume shifts the focus again, this time to the last pair of catgirls: Cinnamon and Maple. Cinnamon is great fun: a day-dreaming catgirl who easily becomes lost in dreams of romance and eroticism. Her comments often make me smile or laugh, and throughout the series the other catgirls have often commented on her voluptuous figure. Maple is a much more restrained character: intelligent and reliable, and less dependent upon others.

After reading/playing through the earlier games, Volume 3 is fairly predictable, but it shouldn’t disappoint fans of the series. 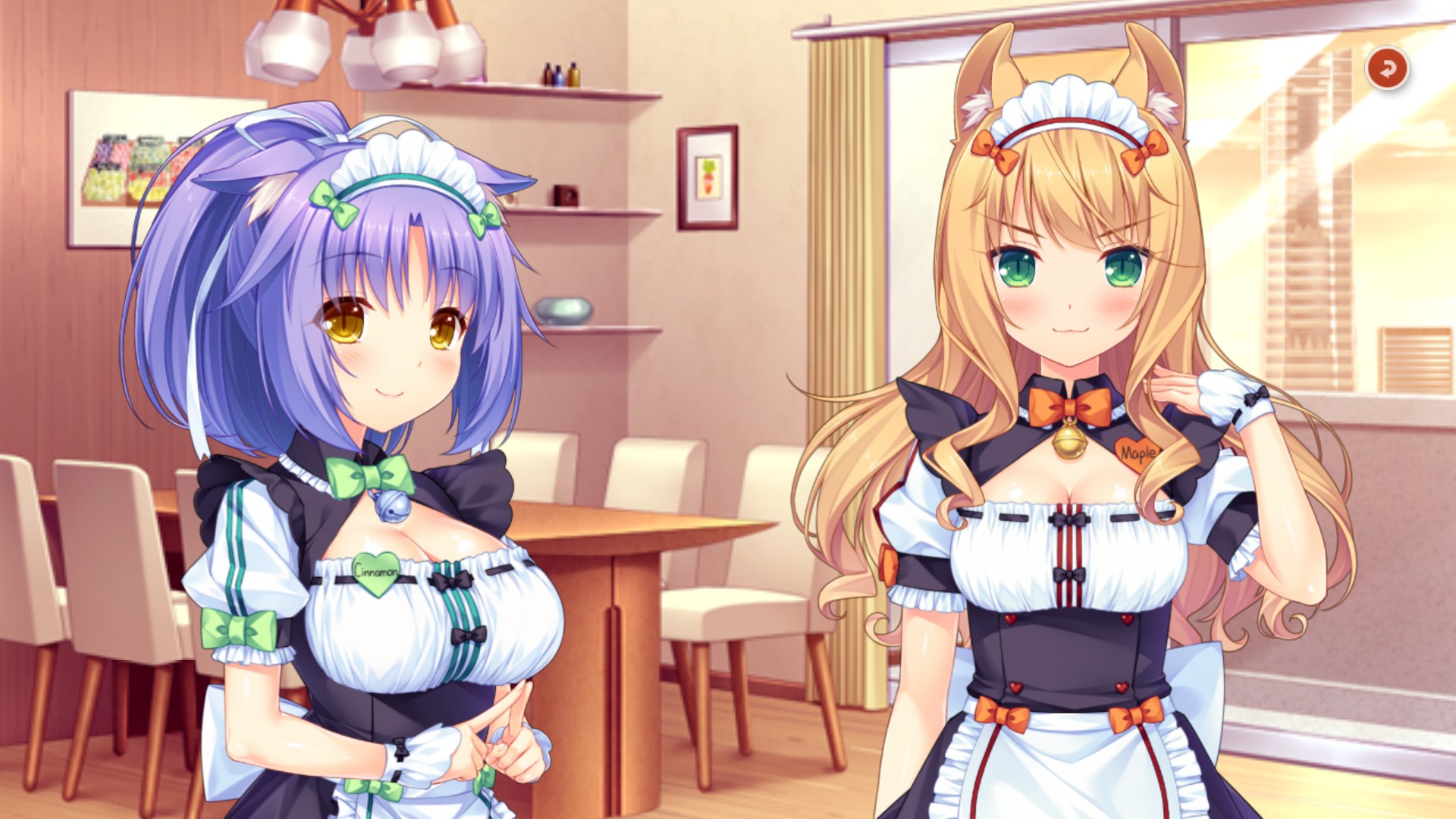 Nekopara’s graphics are a cut above the other anime visual novels that I’ve seen.

While the basic style is the same –static backgrounds for each scene, with ‘paper-doll’ style characters overlaid as appropriate for the script — Nekopara sometimes replaces the normal paper-doll 2D characters with 3D-style models, or very good simulations thereof, and animates them with much more detail than is typical for the genre. Not only do the characters move around a lot more than typical VN characters, but their eyes blink, heads turn, and different parts of the characters’ bodies move independently. There’s even a special game setting to govern one particular body movement. 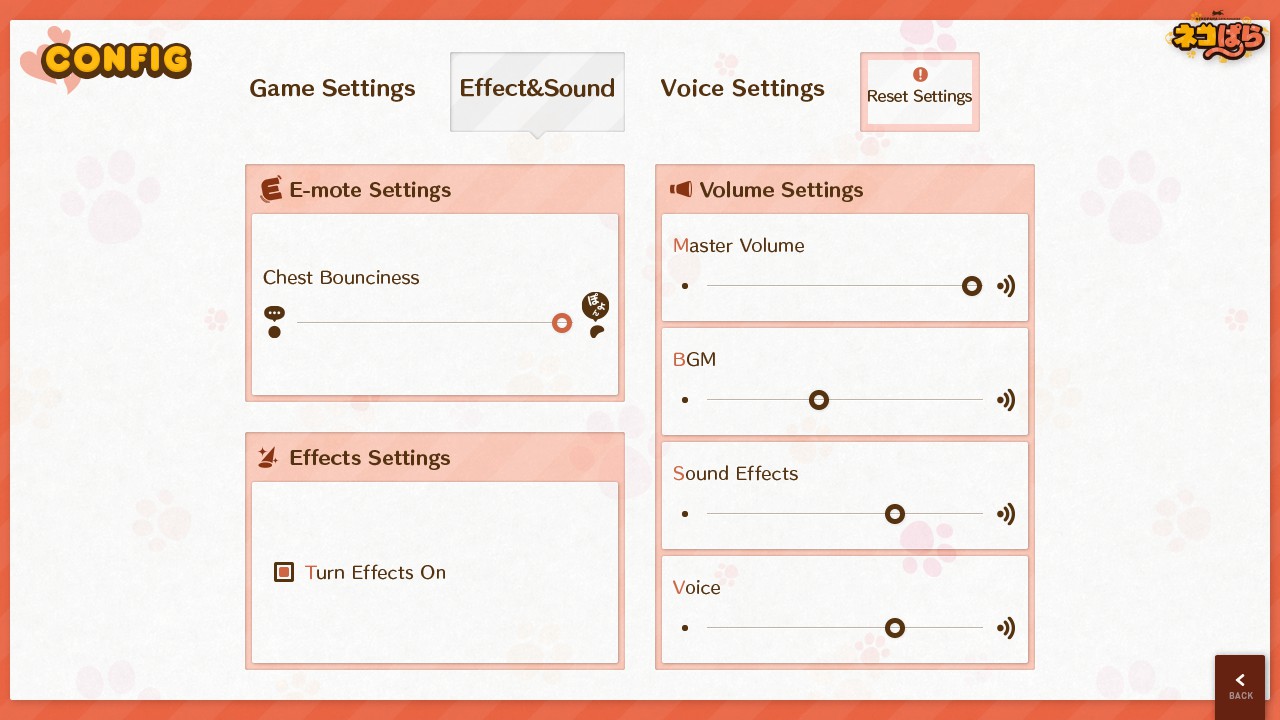 The backgrounds are well drawn, though some look considerably more blurry than many other games. I think this is deliberate as a simple sort of DOF effect, in an effort to ensure focus is retained on the characters. The characters themselves are gorgeous: very well drawn and modelled, with even the eldest of the catgirls portraying a sweet innocence that is particularly endearing. Animations are far better than any other VN I’ve played.

The interface is minimal, as is best for visual novels in my opinion, and the font is easy to read, though the Japanese style quotation marks may be distracting to some. The games include some different drawing styles in parts, including ‘chibi’ art.

Both title and in-game music fall into the typical anime theme-song style, with upbeat electronic instruments and an elevator ‘muzak’ feel. The music is well produced and inoffensive, but it’s not the sort of thing I’d listen to while on a long drive.

Sound effects are good, but few and far between, being used to punctuate the music and speech at appropriate places in the story.

All characters except Kashou, the protagonist, are fully voiced. Though I don’t understand Japanese well, they seem quite professional to me and suit the personalities well. Sounds and voices are normalised well. 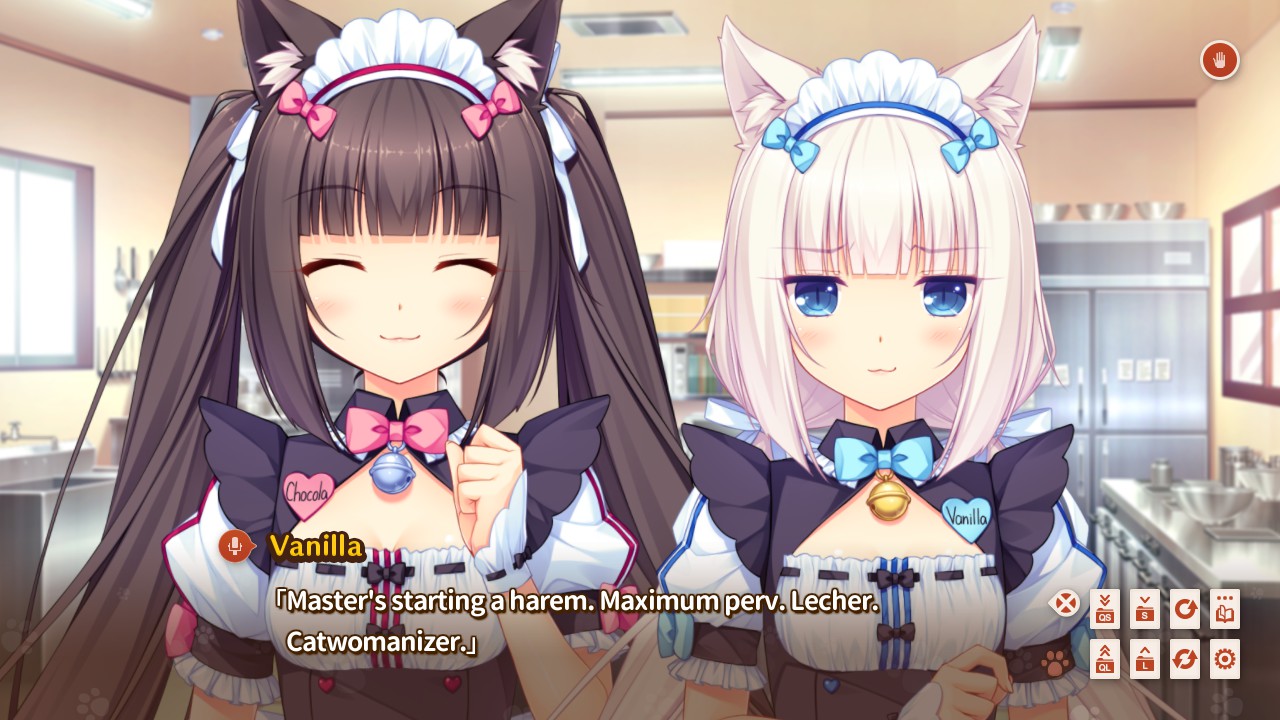 Nekopara plays like a traditional visual novel, with no player choices and thus only one available ending. The norm in the genre is to promote replayability through multiple available choices and multiple endings, so it seems a little bit of a letdown to have only a completely linear path with no real interaction available. All volumes except Volume 1 include a ‘petting mode’, which allows you to touch the catgirls and elicit happy animations and purrs, but this is only a minor distraction and has no bearing on the story.

The game engine is very good, with features such as autoplay, skipping, backlog, multiple languages, animations, and the all-important chest bounciness setting. There are no real interaction points on the screen; all you do is click to advance to the next line of dialogue or the next scene where appropriate, and take time out every now and then to pet the catgirls if you feel so inclined. 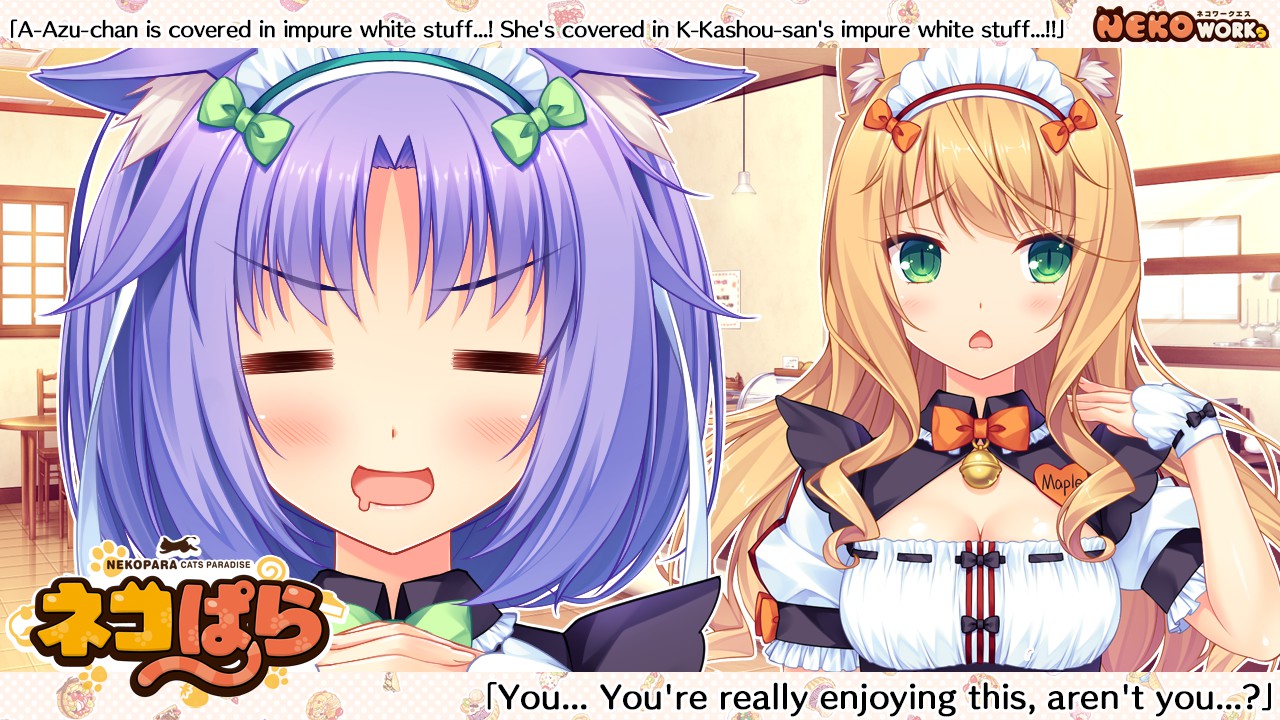 Though the game has the sexual content and nudity tags on its Steam store page, without the official adult patches it’s actually very tame for an anime-themed visual novel. There are a few mildly raunchy still shots and some implied or discussed sex, but don’t expect to see anything explicit without the patches. The patches are bought per volume and are prohibitively expensive — often more than the game itself — so I wasn’t able to review the adult versions at all.

The story itself is fairly typical of a manga, anime, or visual novel plot, with no real twists or surprises. It’s mostly light hearted and fun, and there are a few genuinely funny parts. I began to like and care about some of the characters, which is a good thing in this sort of game. However, the translation isn’t the best in the early games. You may notice some poor grammar and weird sentences: “She smiled with her usual tone of voice.” But it gets better in the later releases. 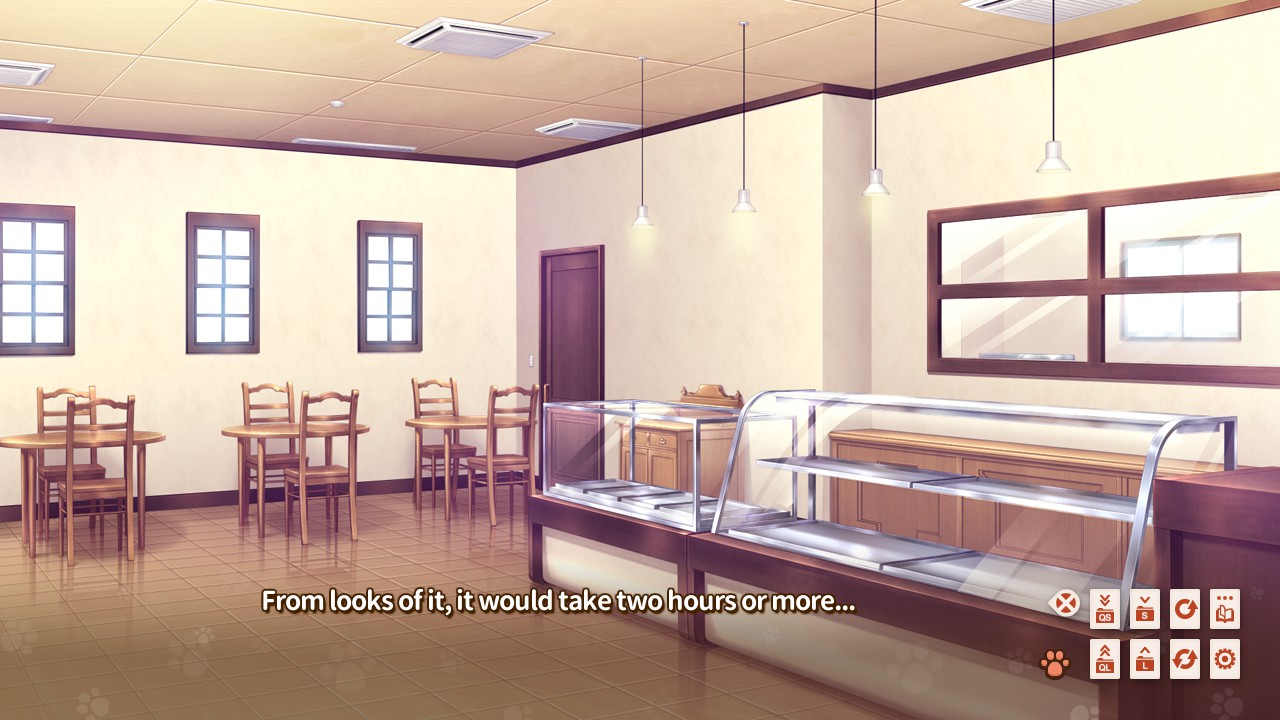 Cons:
– … each volume is already quite pricey, and the adult patch doubles the cost
– Some grammatical errors and other weirdness, particularly in Volumes 0 and 1
– No choices or control; just watching and clicking

Nekopara is a fun anime visual novel series. The script and translation could be better, but could definitely be worse, too, and they improve as the series progresses. The catgirls are attractive and likeable, and the character graphics and animations are better than I’ve ever seen in any other visual novels.

But there are no choices to be made and thus no real replayability; it’s definitely on the ‘novel’ side of the visual novel genre. It’s also quite short, with all four volumes likely to only take around eight to ten hours to read through, obviously depending on your reading speed. 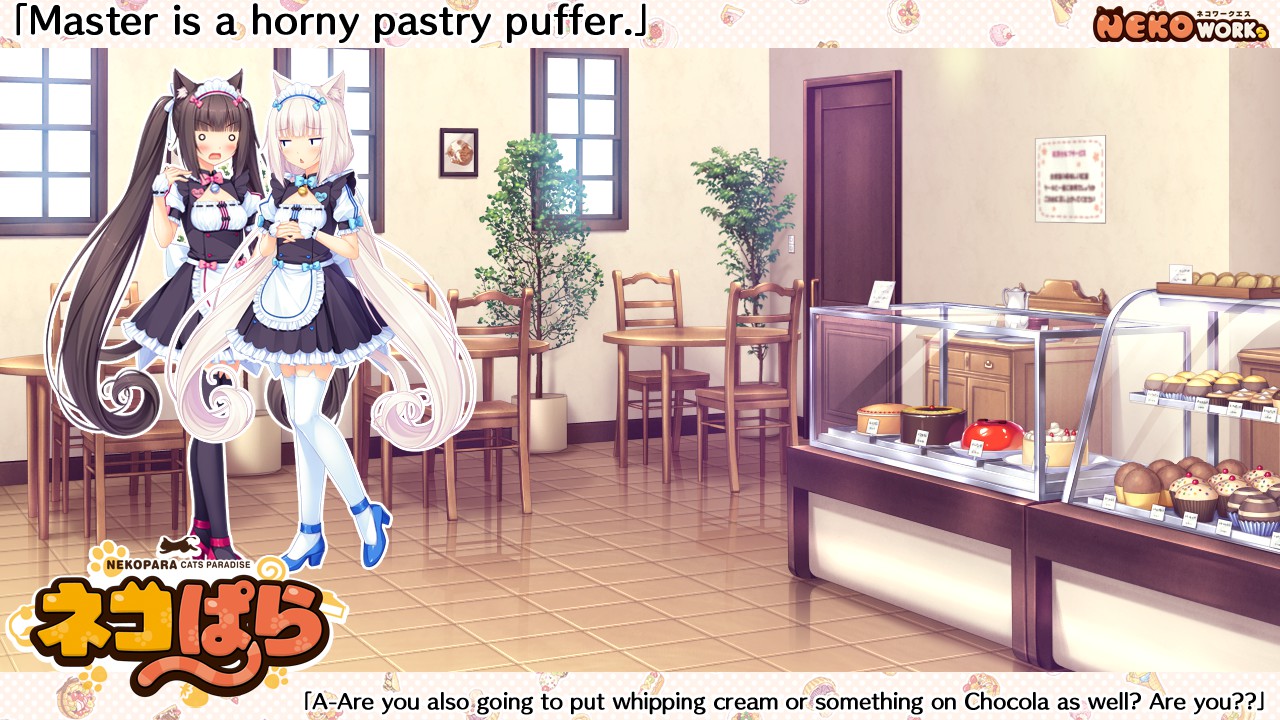 Note: the creator and main artist of the series, Sayori, was hospitalised shortly before the initial release date of Volume 3, causing the release to slip. Sekai Project has announced that there will be a Volume 4, but I believe at the time of writing this review, the creator is still hospitalised. Get well soon, Sayori.