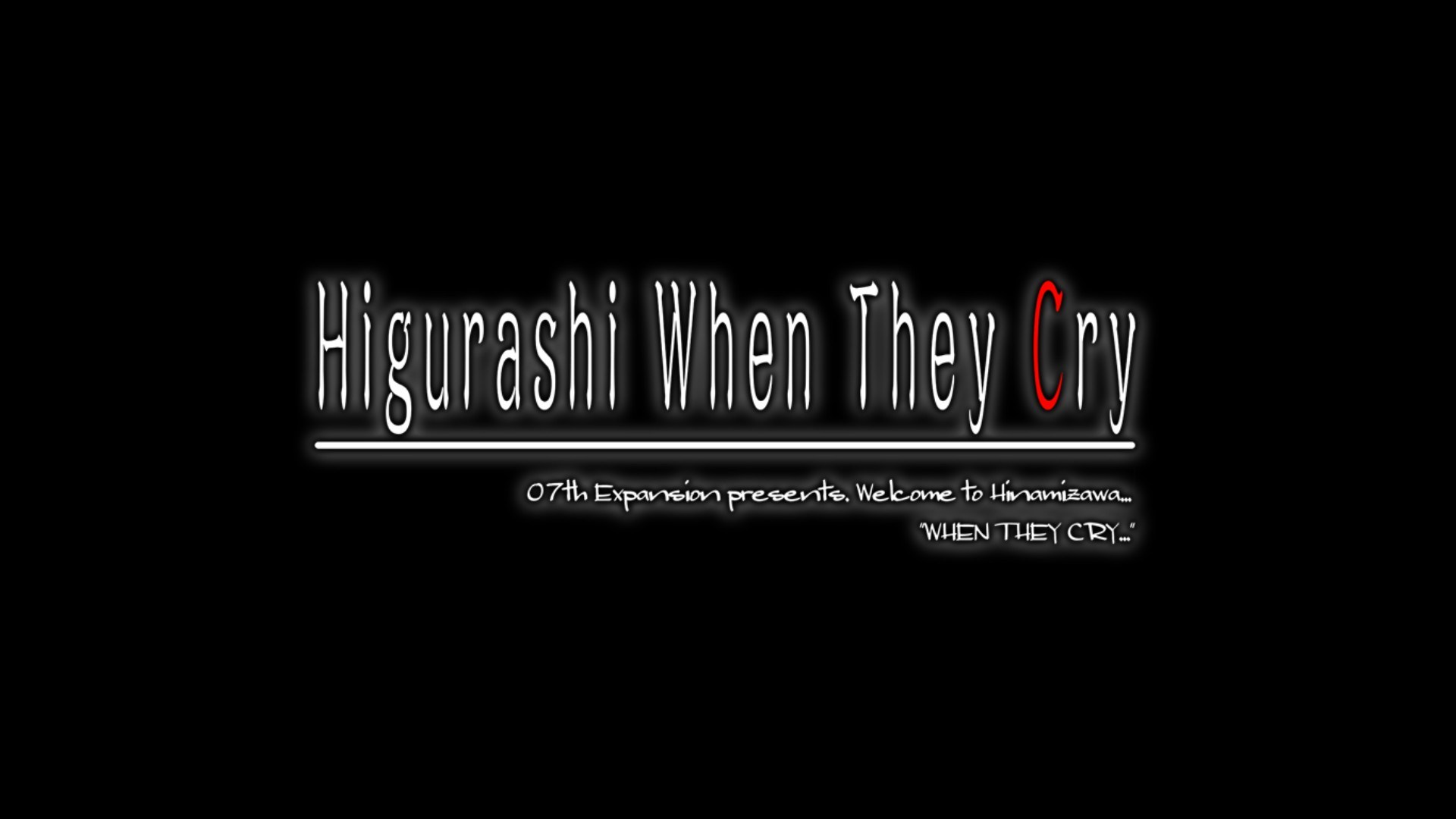 REVIEW: Higurashi When They Cry Hou

The murder mystery Higurashi is a major Visual Novel, if you are curious about this genre read this review!

Higurashi no Naku Koro ni, also strangely called Higurashi When They Cry rather than “When the Cicadas Cry” which would make more sense, is a series of Japanese Visual Novels (VN) by 07th Expansion released in Japan between 2002 and 2006. Higurashi became very popular and was adapted into an anime series, and translated in English in 2009. New translations of the different chapters and a better version of the game have been periodically released by MangaGamer since 2015, also finding their way onto Steam. While several VNs offer choices to the player to reach the good ending, Higurashi does not have any of that. This is more what is called a Kinetic Novel or a Sound Novel, but for the purpose of simplicity we will just call it a VN. Finally, there are no voice actors reading the lines. Instead, there are several sound effects (such as a bat bashing skulls) but mostly different musics and visual effects adapting to what is going on in the story.

While many people lift an eyebrow when they hear the term “Visual Novel” and imagine a harem of lewd anime girls showing off their cleavage (if not more), the genre is definitively not limited to that. There are also a lot of romances aimed at girls, science-fiction adventures (Steins;Gate) or in our situation, murder mysteries. Higurashi can clearly be classified as horror, describing some very brutal deaths and sporting an overall mood of unleashed madness and a tension that will keep you on the edge of your seat. 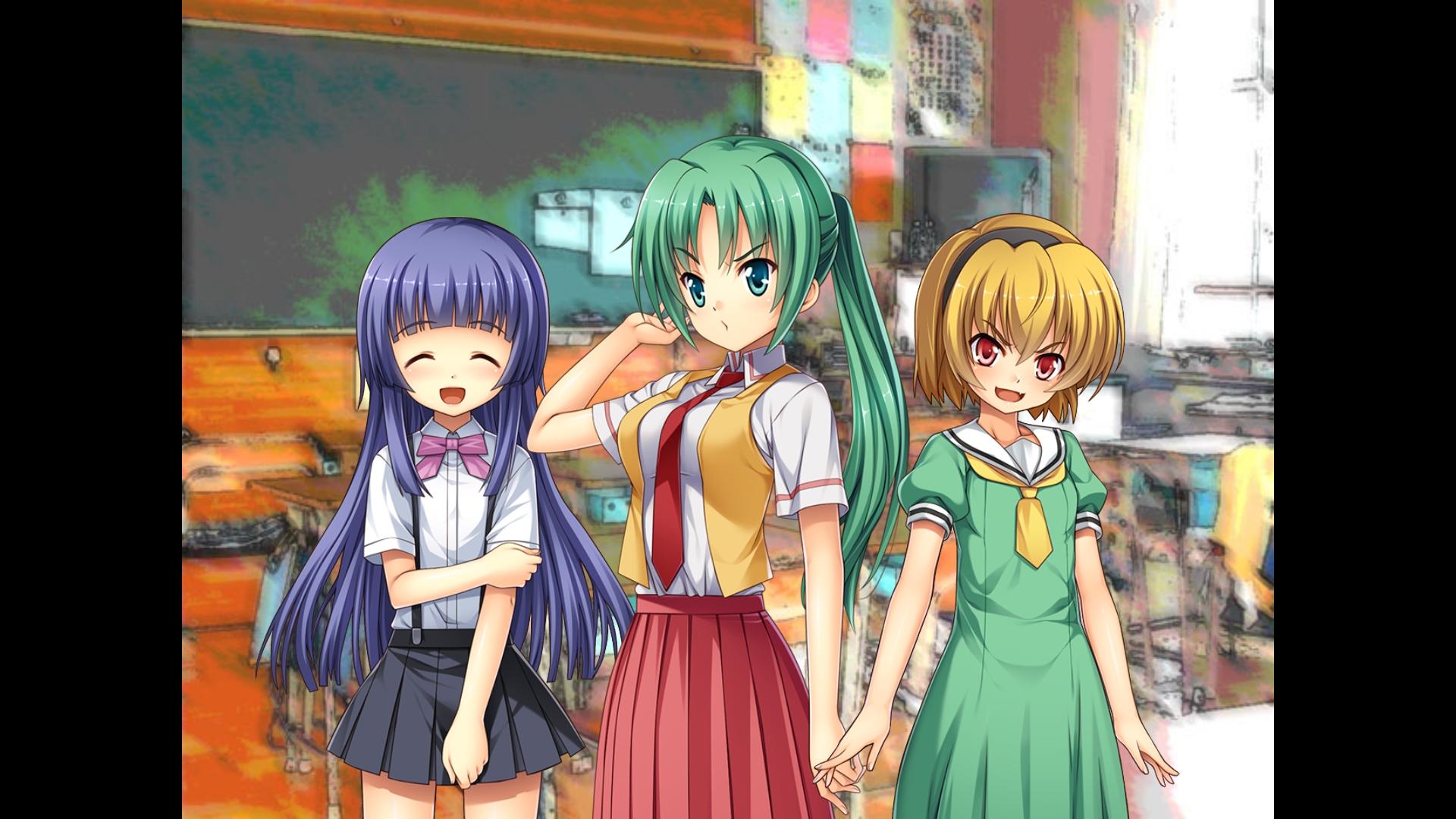 Lambs for the slaughter

At the heart of Higurashi is a strong cast of characters. Our hero, Keiichi Maebara, is a rare newcomer to the village of Hinamizawa. The story is mostly told through his eyes. While the anime counterpart is quite naïve, the VN version is a bit more natural, even when he is torn between the love for his friends and being suspicious of their strange behaviors. Rena Ryugu is the most iconic character of this series, she is often seen with her sailor outfit and carrying an axe. This is one of the reasons why the second season of the anime series was taken off the air, as a real-life murder of a police officer by his 16-year-old daughter happened around the same time. When she does not look completely insane, Rena is the sweetest girl. She wants to take home all things cute, and her way of talking is really unique, with her dialog so well written that even without her sprite it would be obvious that she is talking. Mion Sonozaki is the elder and leader of the group of friends, she is a tomboy pushing everyone else to do their best in their group activities. Despite being seemingly benevolent to Keiichi, she seems to know a lot more than she lets, and might even pull some strings. The younger Satoko Houjou is a little brat always trying to ruin Keiichi’s day by trapping his surroundings. Rika Furude is the maiden of the local shrine, and despite knowing how to play her cute side there is an air of deep wisdom about her. A lot more characters are gravitating around these, and each and every one of them is interesting and memorable. The writing and the characters are a reason why Higurashi has always been so appealing, and why the audience is caring so much about the events in Hinamizawa. 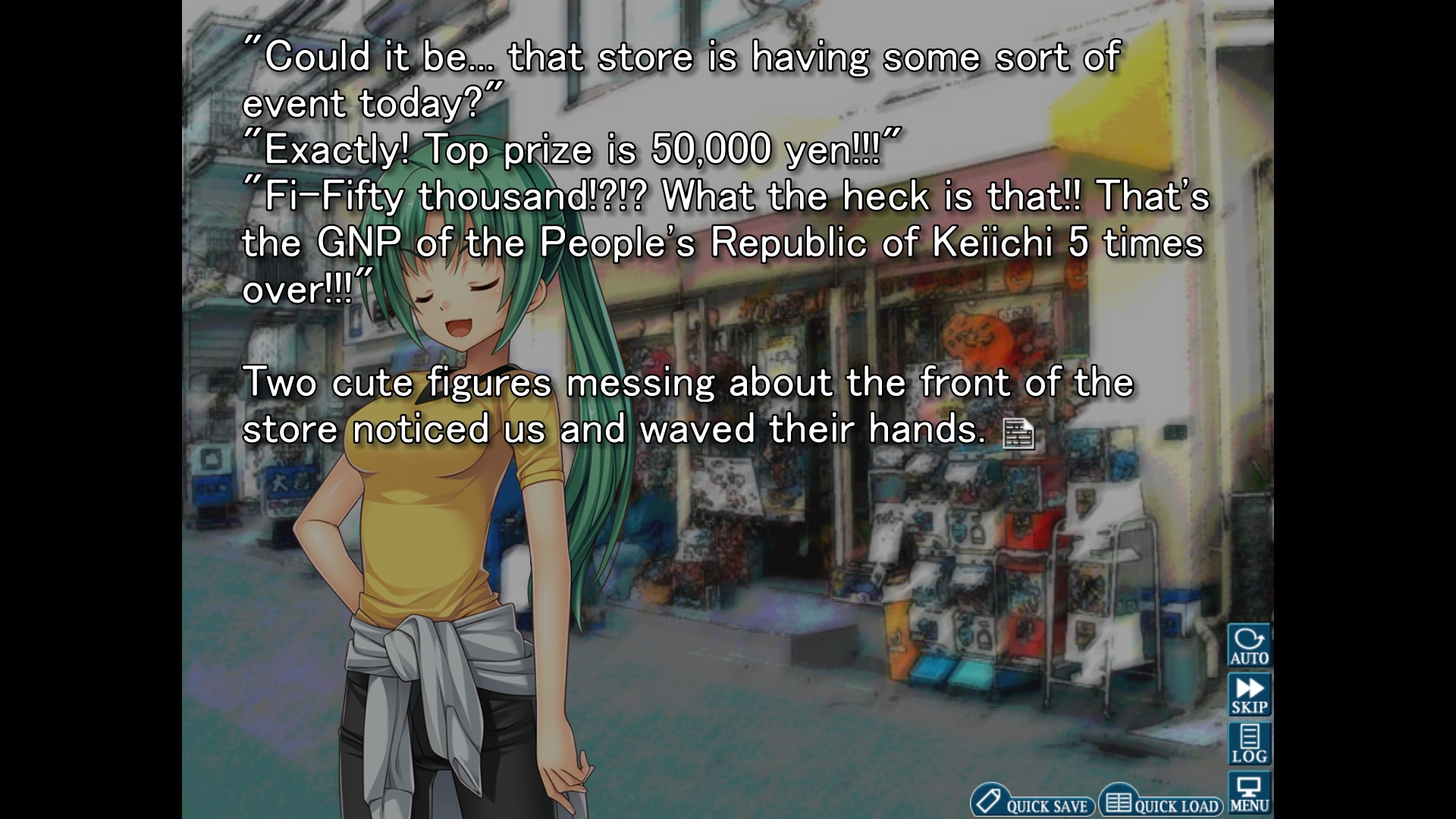 And those events are what gives this story so much depth. A string of murders, suspicious villagers, and the looming curse of the local god Oyashiro-sama all contribute to a rich and detailed setting in which it is really difficult to make sense of what is going on. There are mysteries after mysteries, and only several chapters down the line does the truth start to emerge. In the meantime, clues and red herrings mesh to form a huge spider-web to catch the brain of anyone trying to solve the mystery. Is there a curse? Is there a physical murderer? Those are many of the questions that you will ask yourself if you embark in this grand adventure. 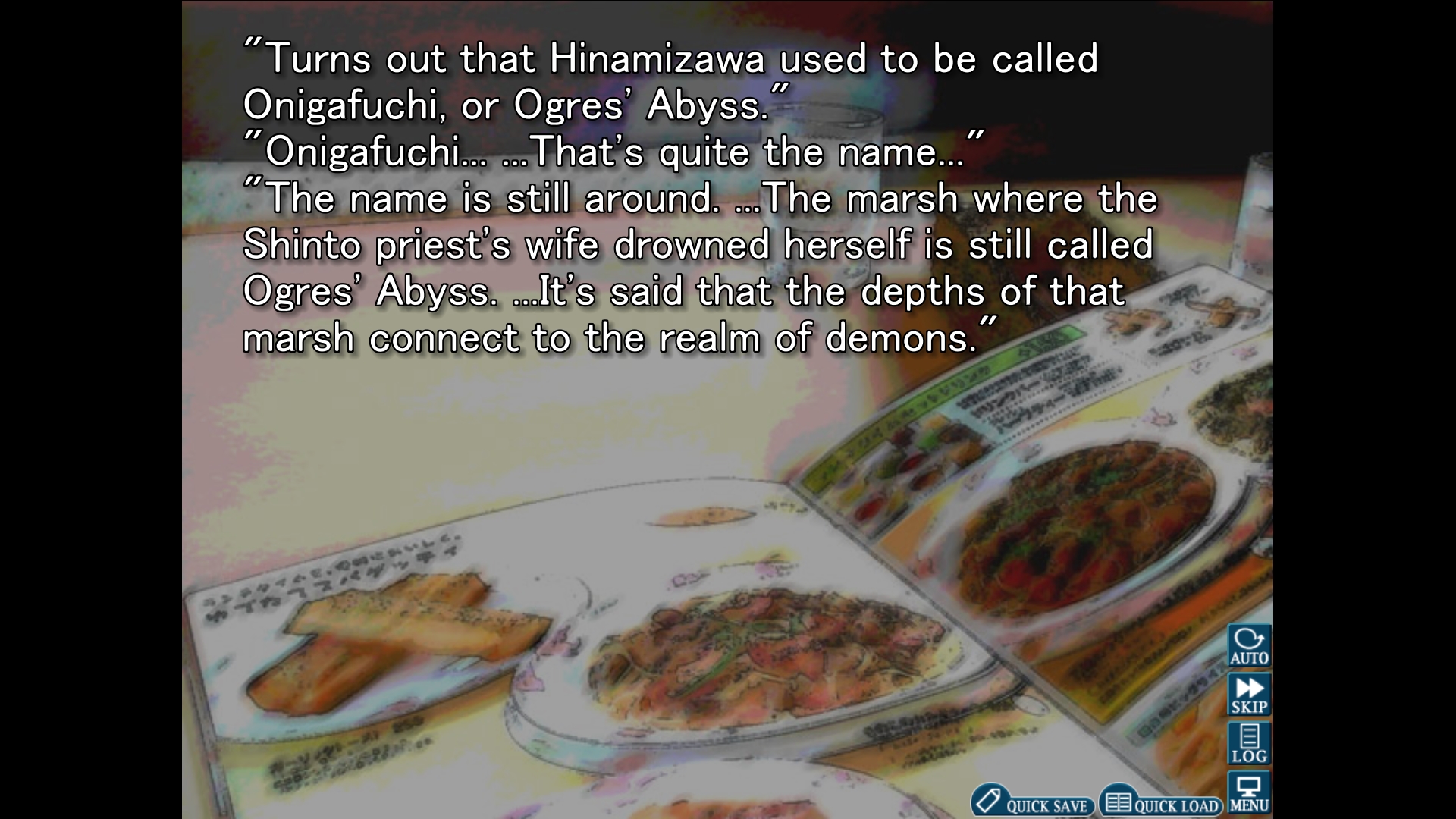 Although, before reaching the moments when things start to go awry there is an awfully long sequence of building friendship. Our little club of friends play games together (board games, card games) and there is a lot of those, much more than in the anime. Fun fact, when I first watched the anime I was wondering if I was watching the right show because there was too much talking and not enough killing. There is a reason for that, as the main character and the audience alike need to care and trust the other characters before things take a turn for the worse. Still, there is a pacing issue at the start before the first signs of the mystery start showing their ugly face. But when things go down… We’re in for quite a ride. I don’t think that I have ever seen paranoia conveyed so strongly, and there are plenty other mental health issues showing up along the path. And then the clock is reset, a new chapter starts with the story unfolding in an alternate way to explore a different side to the characters and the story. 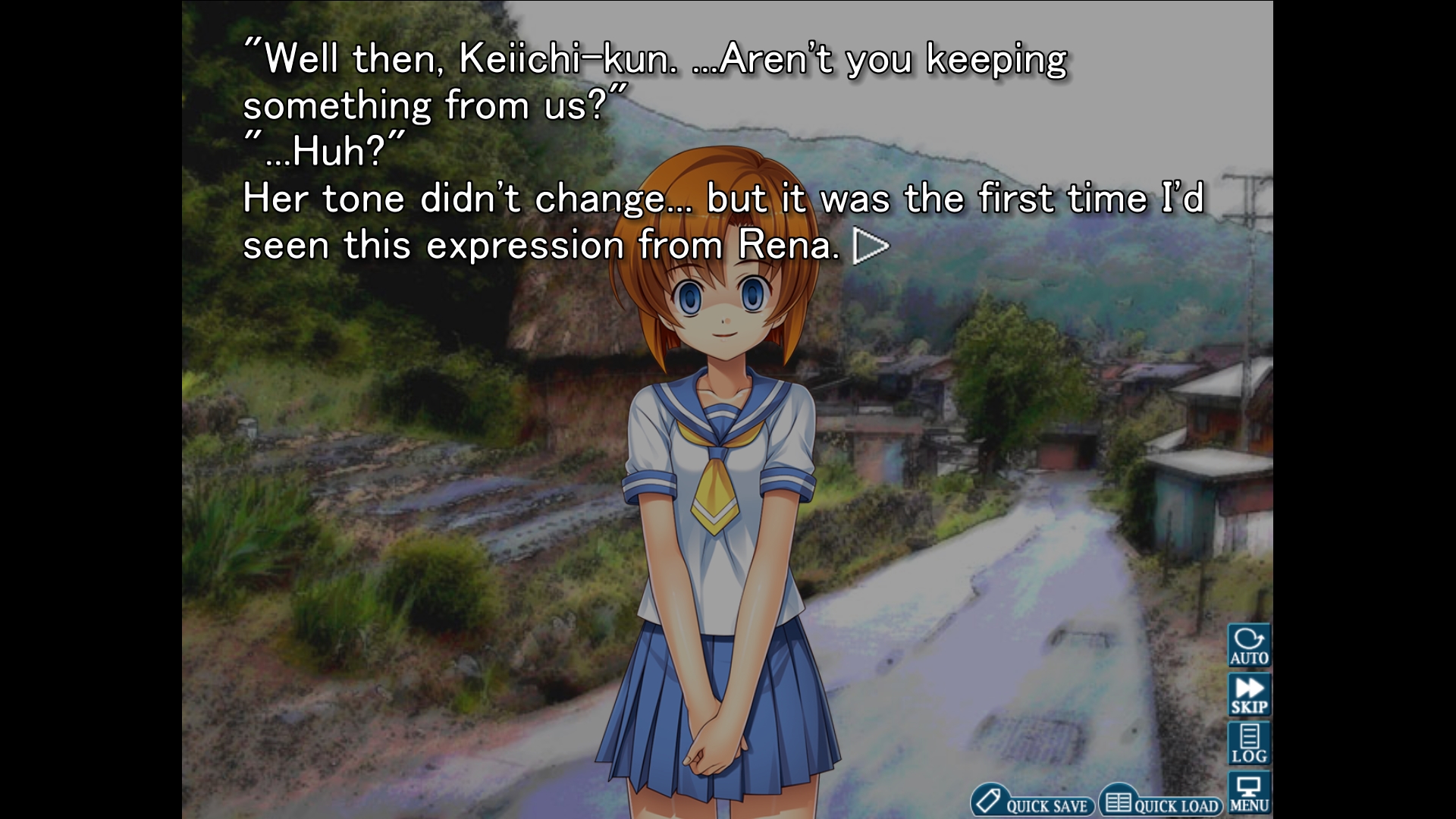 The skin it lives in

If you are looking for visual violence, the VN is mostly describing, never really showing. The anime is more visually gory, and the manga takes the cake. So if you know this series from another support, why would you read the VN? Well, good question, I don’t think that it is necessary except if you are obsessed with every single detail or if you prefer reading as it allows you to paint your own scene in your imagination while the sound of the cicadas contribute to a specific mood and a very unique experience you will never forget. The different chapters are much longer than their anime counterpart, with more details in the scenes and the state of mind of the characters. Each chapter is roughly 6-8h of content and while there are four released chapters in the question arc, and there are seven chapters total. The price for each chapter is expensive, quite understandable and reasonable if you take into account the length, but it will put off the curious. Considering the investment to finish the whole series, I would suggest waiting for a good sale before picking it up (Edit: since this review has been written, the series has dropped to a much more affordable price). 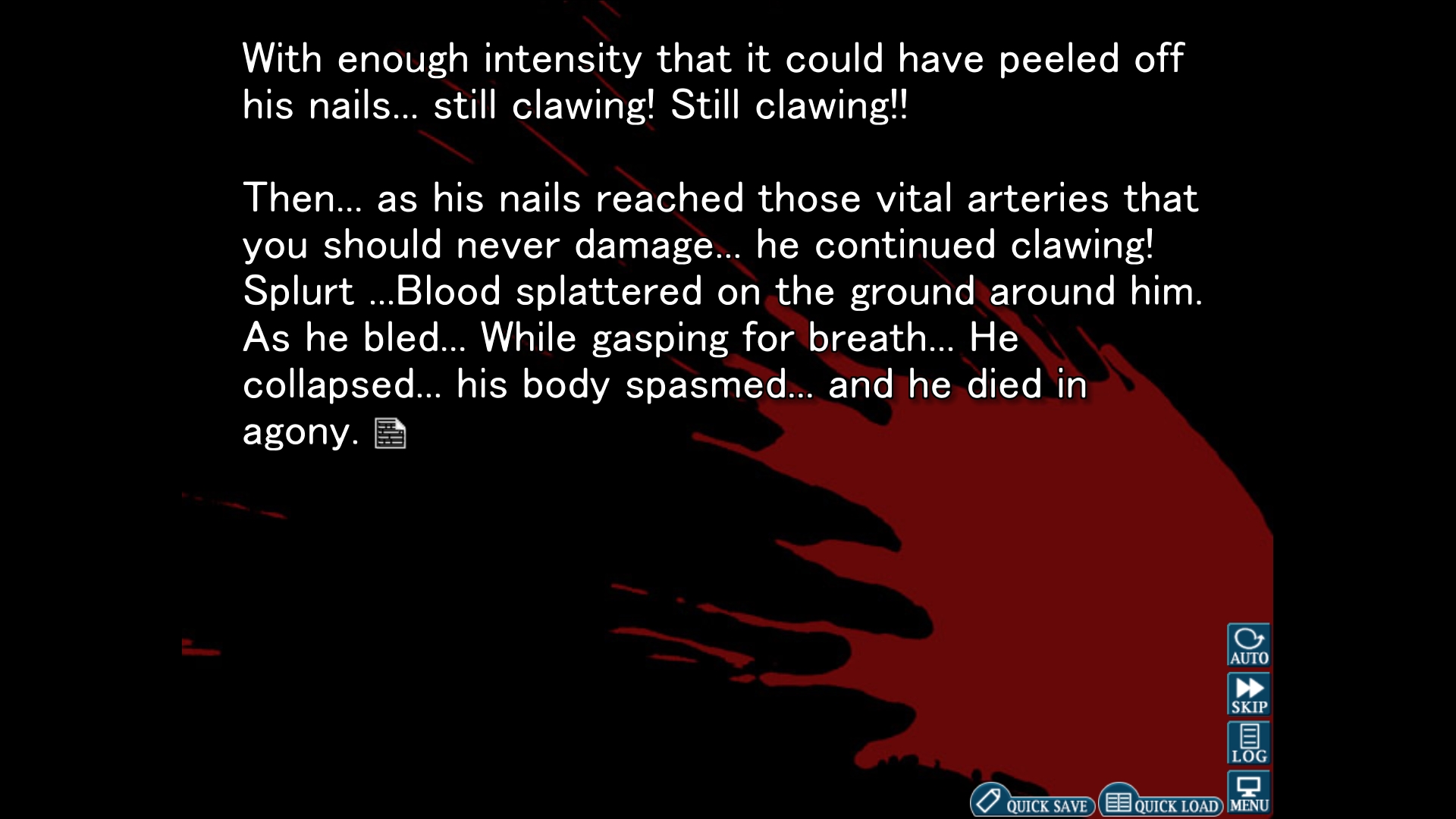 Talking more specifically about the technical details of this release, the game can run on all systems: PC, Mac and Linux. The resolution only goes to 1024×768 although it can be displayed comfortably in full-screen, however the 4:3 aspect looks very dated. The awful original art has been replaced by beautiful sprites inspired by the anime counterpart (you can still switch if you so desire, but I cannot fathom why you would want to – check out the screenshot below). There are many options to customize the reading experience, and I particularly like the auto-play feature (with a speed than can be adjusted) that lets the reader just enjoy the show without having to click or press a button to carry on. Finally, the translation is great. 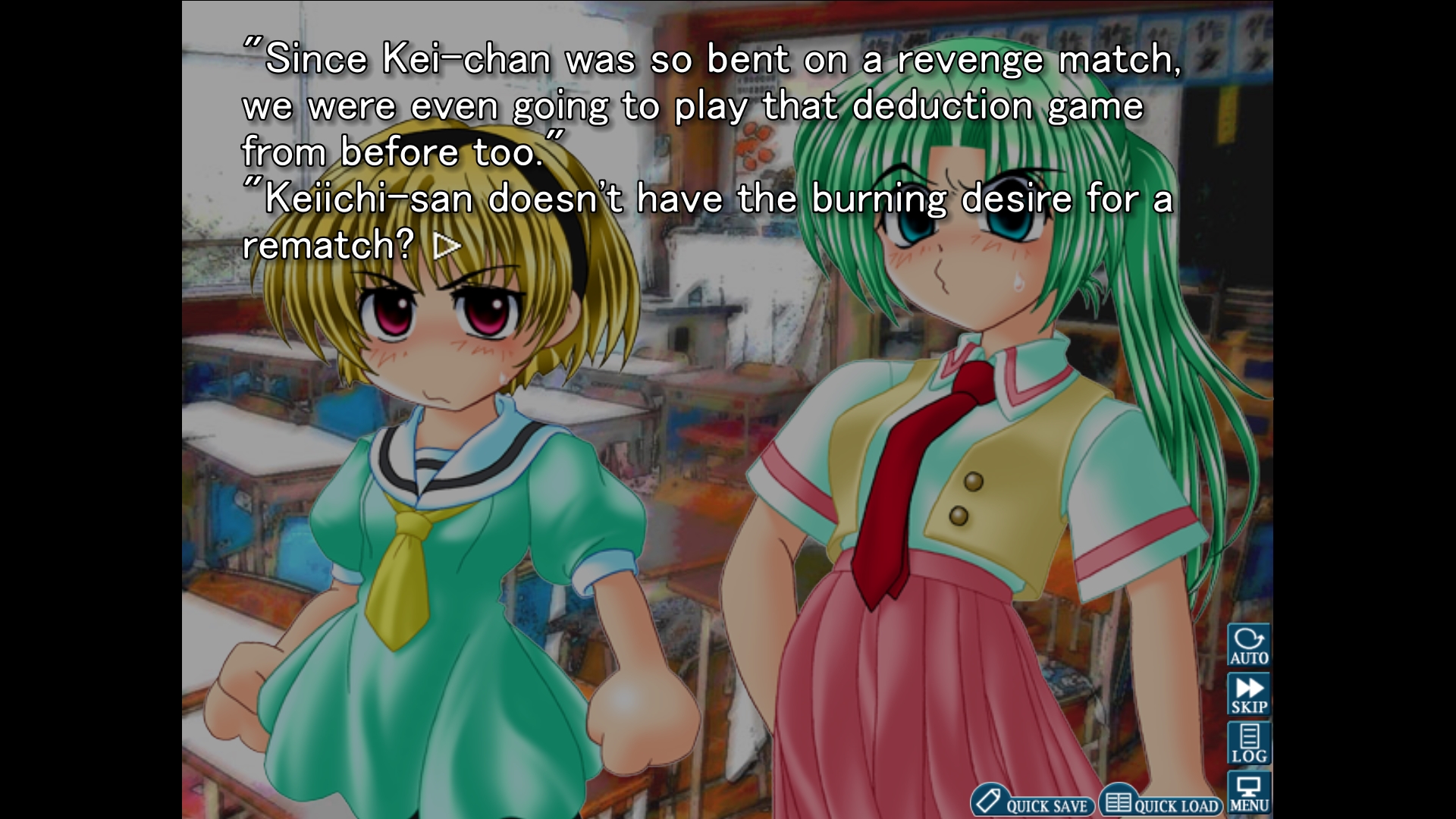 Reviewing the Higurashi Visual Novel is difficult as the anime already exists and delivers a great experience in a shorter time. Still, if you prefer to read or if you are an extreme fan wishing to learn every little detail of this amazing tale, then go for it, it’s good. The characters are amazing, and the story is remarkable with all the twists and turns. There is no shortage of mysteries, and eventually every question finds its answer if you are patient enough to go through the whole series. From the depth of the story to the extreme tension that ramps up during each chapter, Higurashi is a unique and memorable world that I recommend everyone to try, one way or the other. If you don’t like reading, go for the excellent anime series.