Roguelites are pretty trendy at the moment, and it’s rare to see one that tries to break new ground. Nongünz does it in completely unexpected ways.

In case you have been brainwashed by Justin Bieber and the power of the mainstream is gripping deeply what is left of your spirit, by now you should know that Roguelikes is a term to specifically describe games rigorously like Rogue, with features such as turn-based and ASCII. When we are talking about permanent death and procedurally generated levels, with some sort of progression and an ending, we use the term Roguelite. If you skim too fast you might have read the same word, but please note the brutal “k” disappearing in limbo to make room for an elegant “t”. Roguelites are hardly a genre in and of themselves, but more like a flavour applied to something else. Roguelite x pure platformer? Spelunky. Roguelite x Metroidvania? Dead Cells. Roguelite x Twin Stick Shooter? Nuclear Throne. Roguelite x FPS? Ziggurat or Immortal Redneck or Strafe, even though none is indispensable. Roguelite x Run-and-gun? Oh. We don’t really have a strong contender here, although there might be a certain GoNNER some of you might have heard about. And now also Nongünz.

Nongünz takes place in a gothic Western world, with the headless main character digging its way out of a cemetery to enter horror-fueled dungeons populated by grotesque monsters and dangerous dismembered limbs. The art style is beautiful with its crazy black and white pixel art tinged in red accompanied by great music that perfectly mixes the different styles of the world.

However, when I first started the game my immersion was broken in several ways. First, there is no sound or music during the logo screens which made me wonder if there was a bug and the game was muted. Secondly, the way the character and the camera move. Whenever the character jumps, the camera jumps with it, which gives a very odd feeling of weightlessness. This feeling took me a long time to get used to. Lastly, the tutorial is barely understandable and the rest of the game is even worse in that regard. One of my pet peeves in Roguelites is obfuscation of information, even though the most hardcore fringe of the player base seems to enjoy it. I was rather delighted to see Dead Cells display everything and make it easy for the player to get into the flow of the game, whereas Nongünz seems to make a point of not being understandable, even when it displays information. There are pictographs on the different items picked up, but without the Rosetta Stone everything is as mysterious as hieroglyphs and it becomes mandatory to find a guide to have the slightest idea of what is going on in there. There are tons of cool features of the game I would have never even noticed if I did not read a guide… 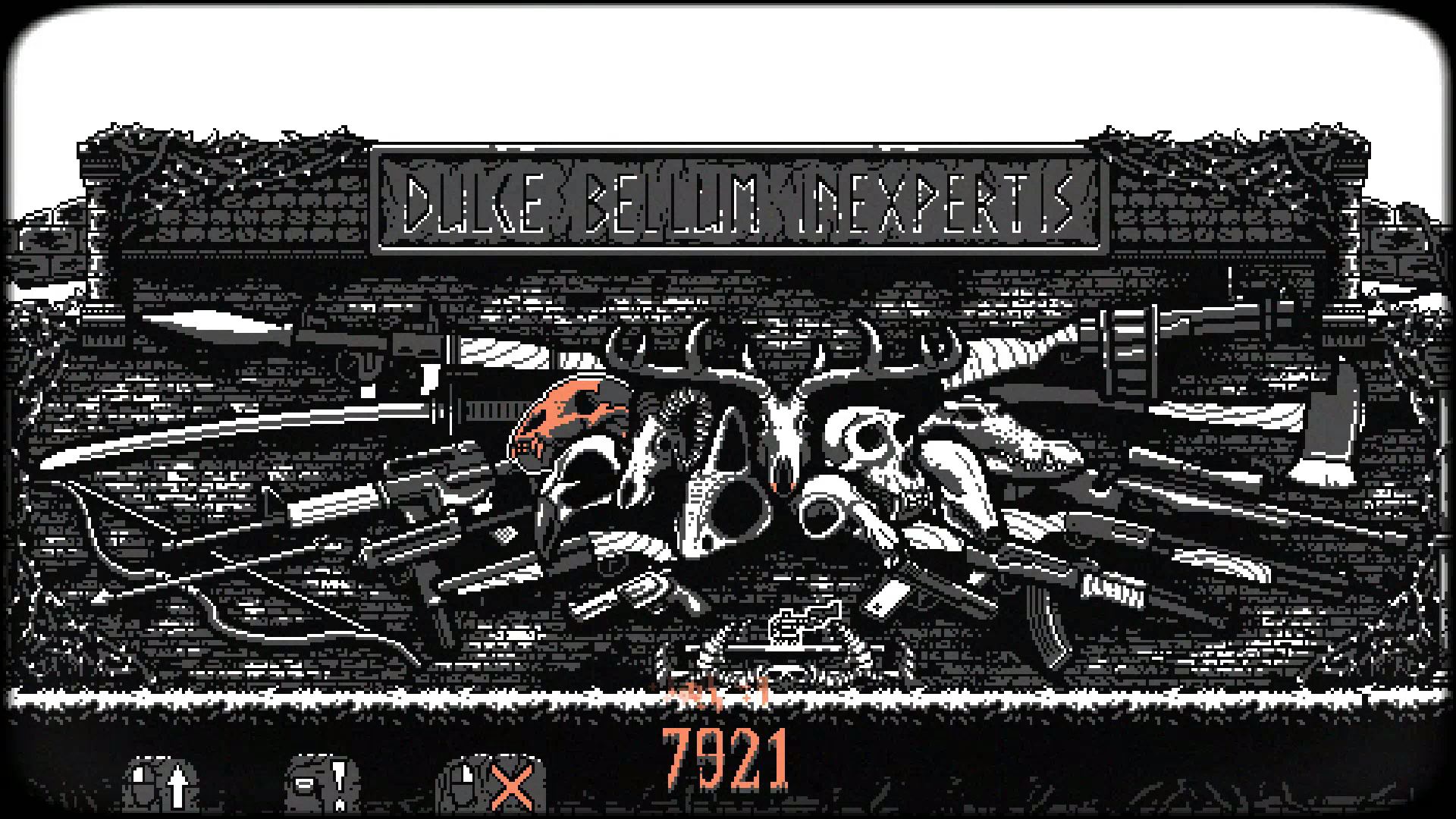 Nongünz is absolutely unconventional. There are tons of fresh ideas bashed into the game with an axe, such as the economy system to buy powers and weapons. Spending time increases the score/currency. Combos increase the score/currency. Shooting like a madman increases the score/currency. And yet, the new weapons have limited ammo and shooting them non-stop depletes them so the player might choose to stick with the base gun except if a bigger caliber is absolutely necessary. Weird. Additionally, the weapons cannot be quickly changed on the press of a key, the player needs to scroll through a list. You might wonder if leaving the game running to spend the time breaks this system, and absolutely not. The developers themselves recommend to leave the game running like a clicker game. Astonishing… this is the weirdest system I have seen in a Roguelite. In regards to the environment and wasting computer resources I cannot say that this is a very good idea… Still, in-game it can help a few struggling players to acquire some equipment, because the dungeons themselves are very stingy, and most of the powers (conferred by the skulls) are quite useless, whereas good weapons are absolutely necessary to vanquish the most basic enemy type. 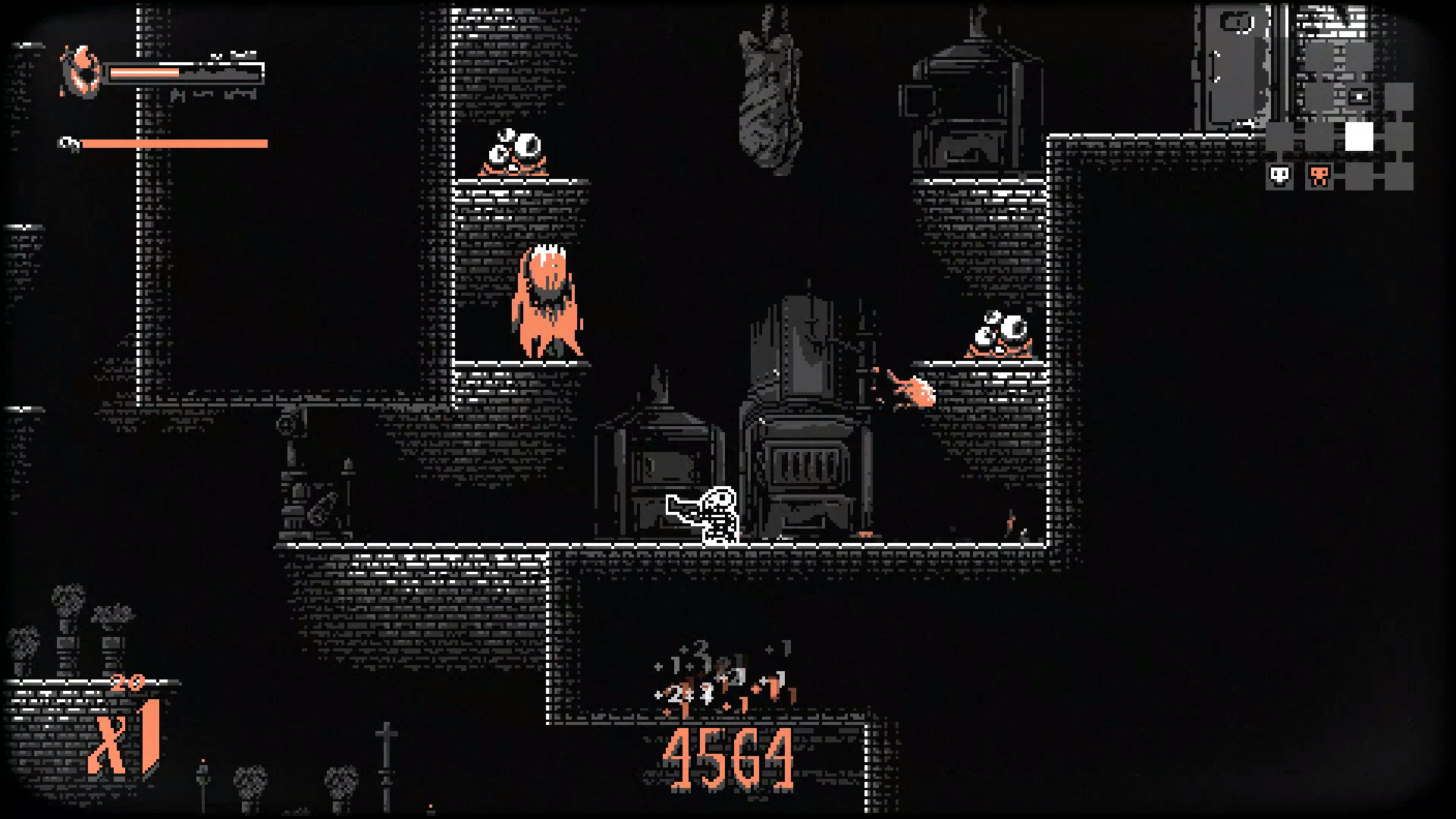 Flies, like in The Binding of Isaac, take on the role of bats here, but I have never seen them so annoying. The difficulty is absolutely brutal, and not just because the enemies are unfair (I would say they are quite alright) but because there are only two directions in which the player can shoot: left or right. And even worse, if those flies get too close to the body of the player, the bullets spawn behind them, and there is no melee attack to get rid of them easily. Earlier I mentioned Run-and-gun games, and the two stalwarts of the genre are Contra and Metal Slug. Both of these games allow to shoot up and down, and sometimes even in diagonals. The only classic Run-and-gun that does not allow vertical aim is Broforce, but it compensates with a melee attack, special powers and mostly horizontal playgrounds. The Run-and-gun Roguelite GoNNER also did not allow to shoot up, and for that reason I couldn’t quite get into the game. This lack of a necessary feature is less of a turn-off in Nongünz since the levels are mostly designed to allow the player to move around, but sometimes it can get really infuriating if stuck in a tight space with flies. Another reason why I do not understand this choice is that Nongünz has obvious inspirations from The Binding of Isaac in its enemy design, and the Vlambeer games (Nuclear Throne) in the feel and effects of the gameplay. Both of these games allow to shoot in multiple directions while having no verticality. Nongünz has a lot of verticality and the only way to shoot up is to do a slide. I guess this reflects perfectly that the game is transforming from something that should be simple into something complicated that requires skill and knowledge. Oh, and no auto-fire, you will get sick of clicking without end.

At least the controls are perfectly adequate with mouse and keyboard (or controller) and can be rebound (if you manage to find where to look in a menu without text), the only glaring omission is the lack of a button to go down platforms. For some reason, the developers thought that another basic feature was unnecessary. Next time they will remove the ability to shoot altogether! How about we remove jump in a FPS? Oh wait, Bulletstorm did it. 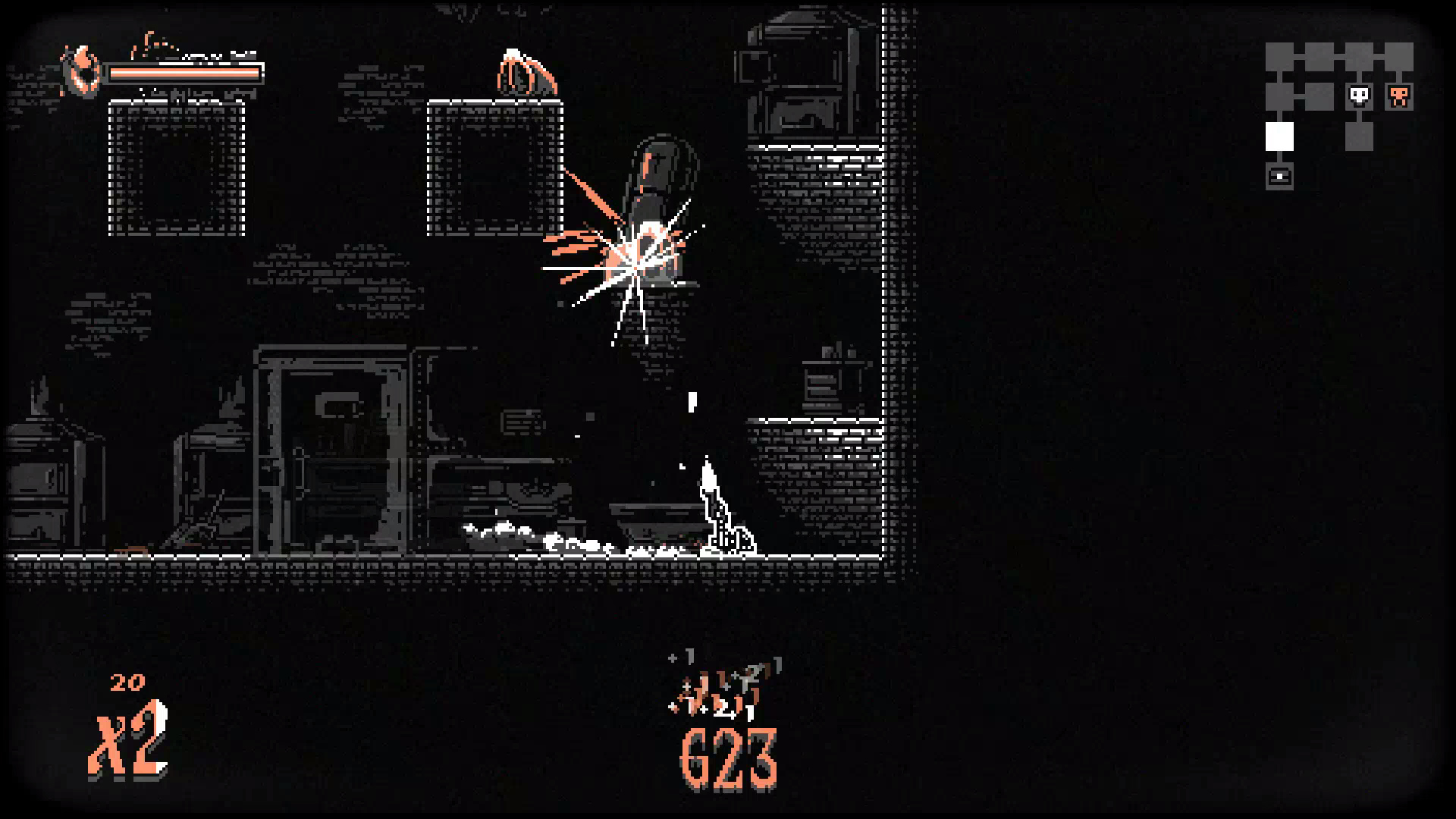 Devil in the details

I will admit that I tried really hard to get into Nongünz. There are lots of cool little details that show the creative talent of the developers, such as a button to show the location of the next window to exit the level and store items or buy stuff. There are little prisoners to rescue that boost the economy. There is a dodge roll with invincibility frames. Every enemy is behaving in a unique way that the player needs to learn. Dying resets the score so there is a constant choice between playing it safe and using the storage or being greedy, which allows the player to deeply strategize their run. Consuming stats boosts allows to get back some health (you keep pressing on one of those from the menu – of course the game does not teach you that anywhere). The weapons are really cool until they run out of ammo. And yet… I hate when games break your equipment. There is too much grinding to get good gear. The shooting would have needed to allow verticality. The flies too easily break the rules imposed on the player, and the first boss is a health bag that can frequently spawn flies in a tight area containing dangerous spikes. Good luck with that. I am not having a lot of fun, and that’s perhaps the most severe judgment I can apply to the game. 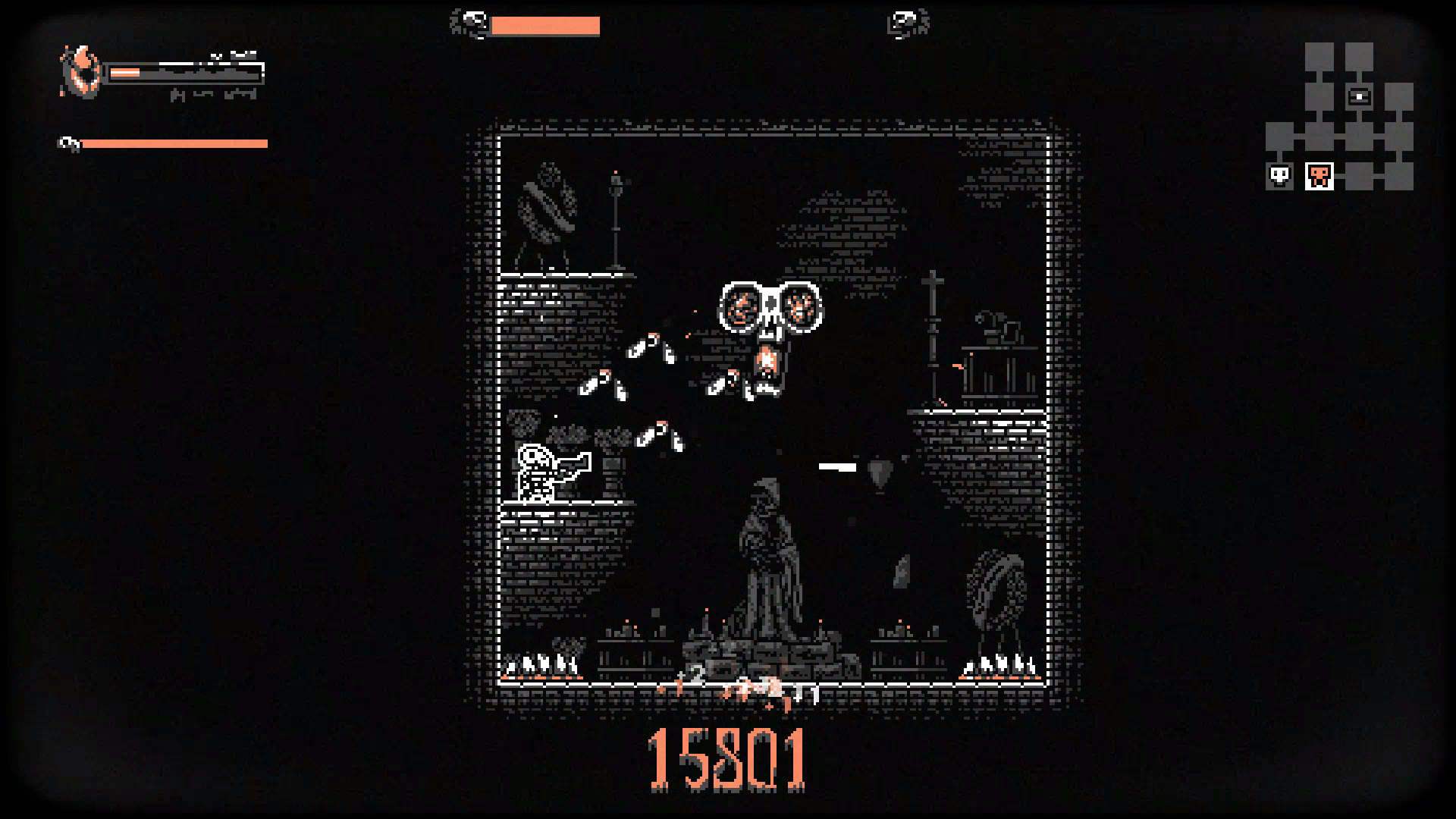 Nongünz is a mixed bag of fresh ideas and strange design decisions. There is a lot of depth to be found in here, but it is well hidden and only the hardcore fringe of the Roguelite players will find their heart’s desire. If I think about previous games that gave me a similar feeling, I would say Devil Daggers. I can’t quite get into it, but I can see how a few can love it to bits. For others like me, Nongünz would need a lot of play-testing and adjustments to become enjoyable for a wider audience and less grindy, but then the game was not geared that way in the first place and that’s just fine, to each their own. If you disagreed with me and recognized yourself as someone who would enjoy this, then you must absolutely get it, the rating is a “SAVE” for you. If not, give this one a pass.