Crimson Nights takes a stab at the dungeon crawler genre, but misses wildly.

The game includes no story or background lore whatsoever. Rather, you play one of up to four unknown fighters who must destroy all of the creatures in a room in order to unlock the exit. Then you leave the room, and find yourself in another very similar room, and do it all again.

Crimson Nights takes the retro pixel graphics approach to visuals, and they are mostly competent. Character and monster graphics look quite good in the game, though animations are very limited. The backgrounds seem to have a bit more detail than the characters and these look quite nice, though become repetitive rather quickly.

The title screen graphics are large and very blocky, made worse by the choice of blood-soaked text. The main menu font is pretty ugly, too. The character appearance on the selection screens looks rather hideous, with the standard character graphics being blown up to almost a quarter of the screen height. None of this is a great introduction to the game. 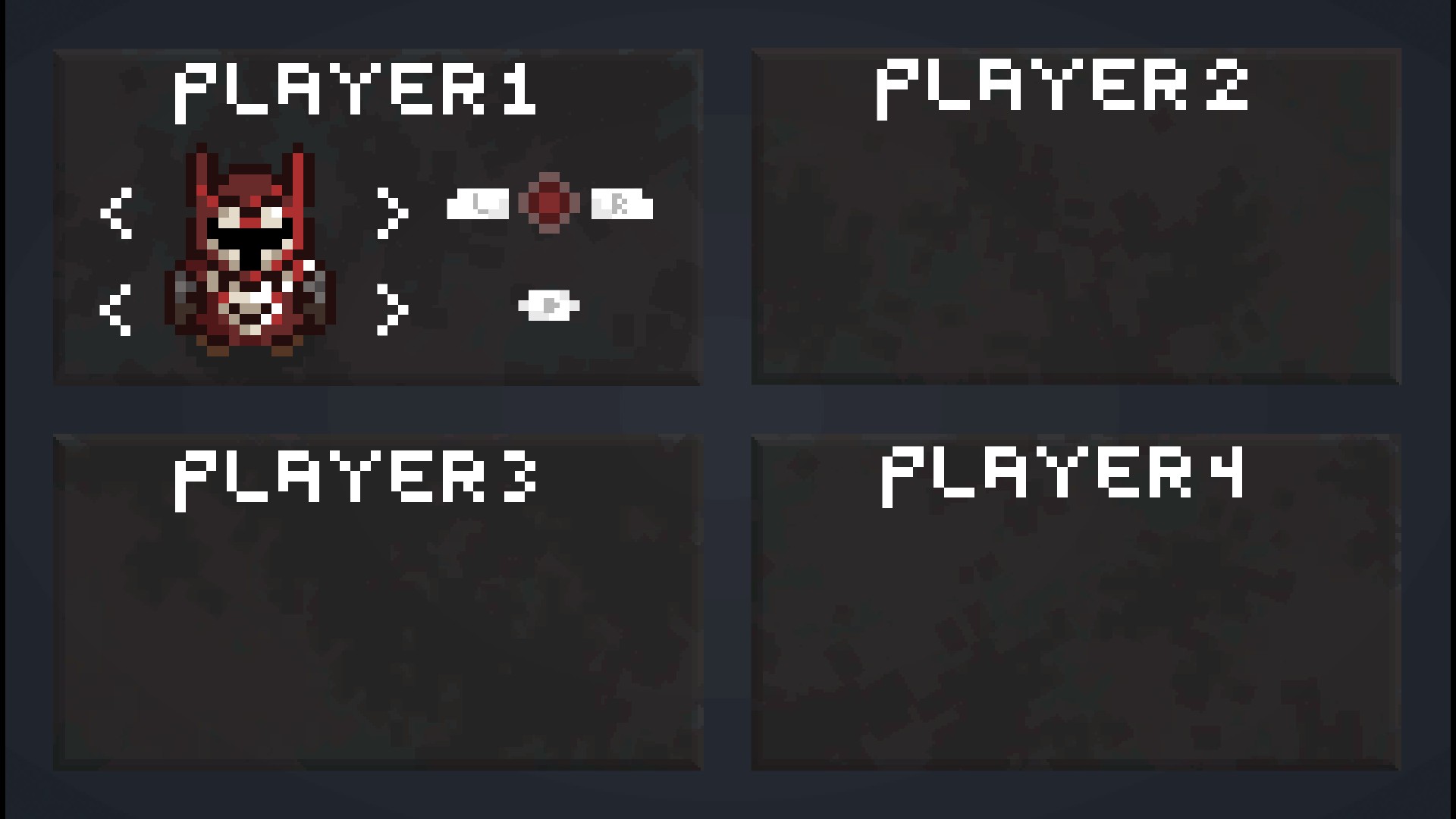 The game takes a retro approach to its interface, too, with a minimal on-screen UI that includes no in-game menus, tool tips, or anything like that. It’s functional and works fine, though, once you know what you’re looking at.

Resolution and full-screen/windowed mode comprise the entirety of the graphics options.

The soundtrack is fairly limited, with only one (or two?) repetitive and not-very-fitting retro chiptunes. If there are more tracks than that, I didn’t notice, since they sounded the same.

Sound effects are grating and retro-themed, don’t really sound like anything recognisable, and also seem to be inconsistently attached to the events with which they are supposed to be associated.

There are no voices, which is fine.

The Crimson Nights store page on Steam describes the game as a dungeon crawler. That doesn’t quite seem to fit the gameplay, though. To me, the appeal of a dungeon crawler is the whole concept of progressing through and exploring (‘crawling’) a dungeon. But Crimson Nights doesn’t really have a dungeon, and it doesn’t have any sense of progression. Instead it has a room. Once you’ve killed everything on the screen, the exit door opens and you leave. The room disappears and is replaced with another room, with another group of monsters that spawns immediately. It’s not a dungeon, and you certainly don’t do any crawling.

I think the game is more accurately described as a retro, room-based beat-em-up, or a simple arena brawler. The combat provides no more options than swing your melee weapon, shoot your missile weapon, or block with your shield. There’s also no story, so no progression through the story. There’s no character progression, either, beyond picking up items that happen to drop, or purchasing new ones from the occasional shop room. 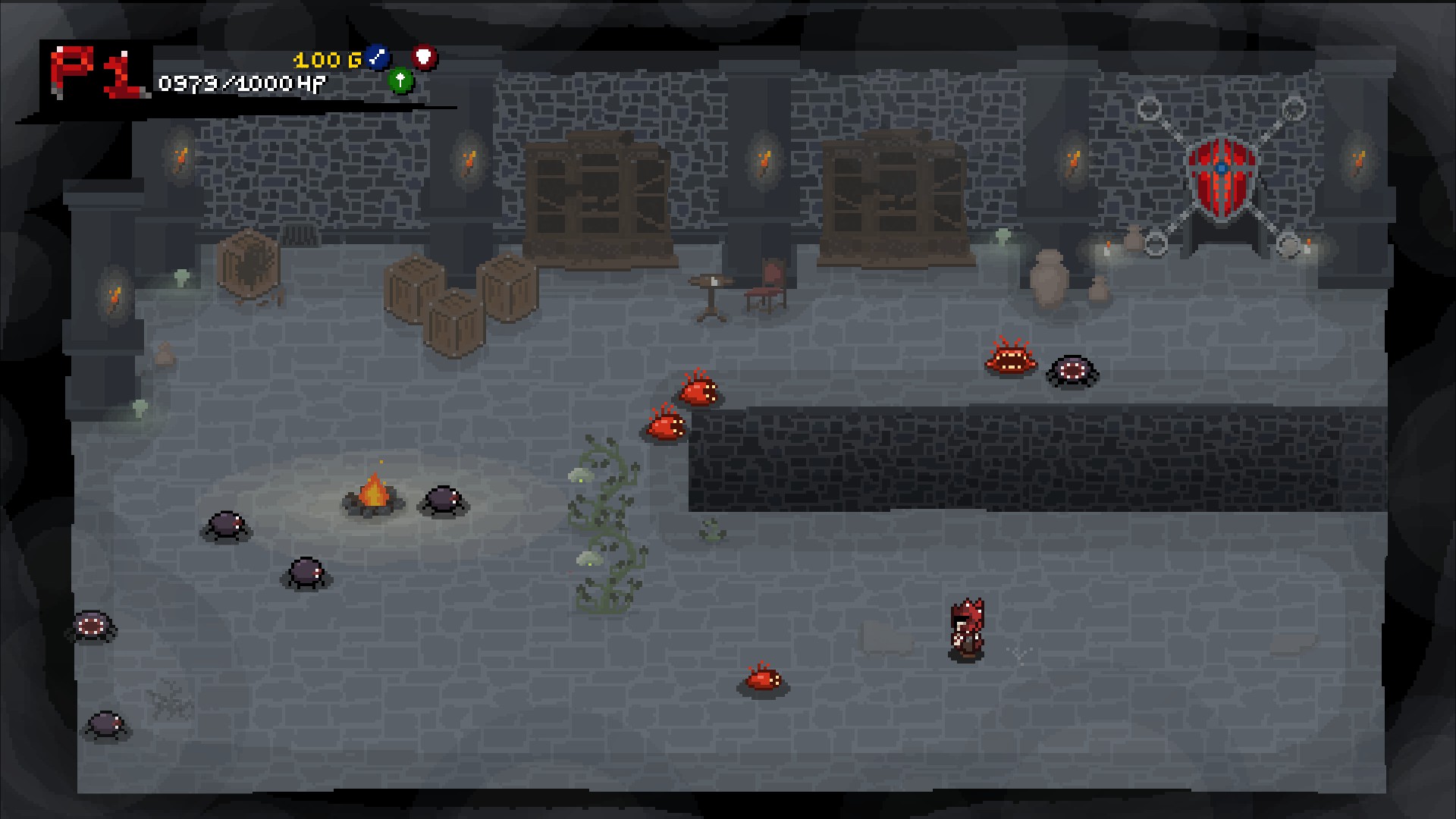 Genre categorisation and confusion aside, though, the real question is how does the game play?

To begin, make sure you have a controller plugged in before you even start the game. Crimson Nights was apparently designed for controllers, and doesn’t explain any of the keyboard controls or let you remap them. Once you finally figure them out, you’ll be surprised at how terrible they are. So just ignore them and use a controller. Once you do that, controls are very simple. Use left stick to move, X to fire your bow, A to swing your melee weapon, B to block with your shield, and Y to do anything else: pick up an object, leave the room, etc.

Your character is relatively light on his feet, so you can run around the screen pretty quickly, keeping away from most creatures with ease. Your bow seems to do very little damage, but allows you to keep away from your targets, so it’s safe. Your melee weapon seems to do a lot more damage, and even tends to knock back your target most of the time, but it puts you more directly in harm’s way, so it’s a riskier option. Either way, every room plays out essentially the same way: run around avoiding monsters, mashing either X or A, and occasionally hitting B if you get bored and want to mix it up a bit, until all the baddies are dead, then run around and pick up the coins that dropped. If you got lucky and the creatures also dropped some items, see if any of them have green stats instead of red, and pick them up if they do. Then leave the room, wait for the next room to appear, and do it all again. 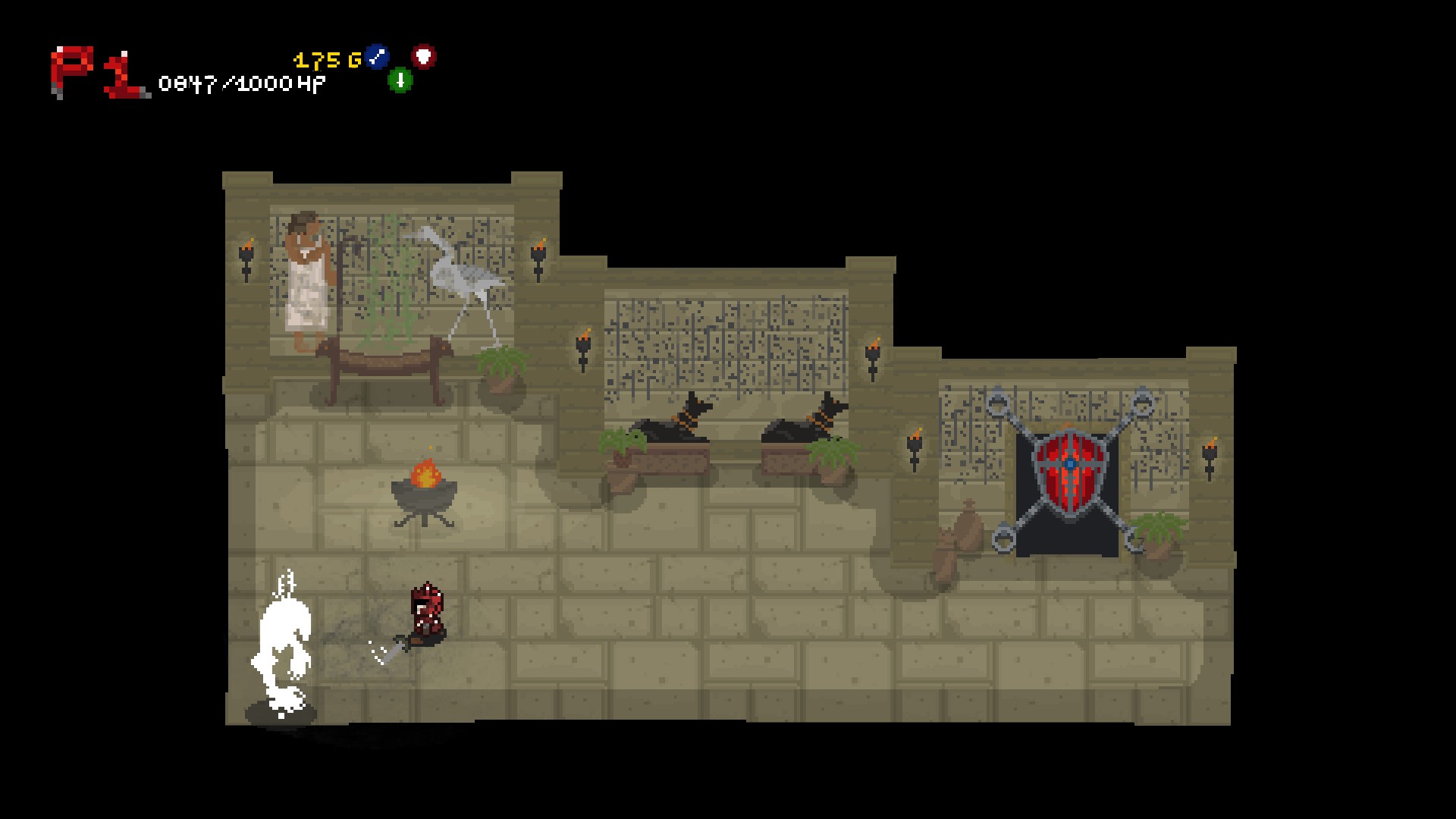 The game includes local multiplayer on one PC, with up to four controllers. Though I wasn’t able to play with anyone else, I imagine this would make the game slightly more fun, simply from the social nature of it. It also has four game modes: crawl (as described above), where you keep playing room after room until you die; floor, where you set a target number of rooms; survival, where you can spend your saved gold at the start and then enter the one room where monsters keep respawning until you die; and PvP (multiplayer only), where the game plays like a simple arena brawler. They’re basically all the same mode with only minor differences.

There’s little variety of monsters, and so far I think I’ve only encountered one enemy that was able to direct any ranged attacks at me. The boss-like monsters are annoying because they don’t get knocked back, but otherwise they require essentially the same tactics that work for everything else. Though there is some small variety in rooms and I believe each room is pseudo-randomly sequenced, potentially with procedurally assigned monsters, they’re not procedurally generated in the rogue-like sense, as I’ve seen the same room layouts and obstacles over and over again.

The game is also rather buggy. There’s a game-breaking bug that happens often: a monster will become stuck where you can’t shoot or hit it. That means you can’t kill it, and thus can’t leave the room. All you can do is quit. Another common and similar bug, where a creature becomes invulnerable and just stands there doing nothing, also requires you to quit. 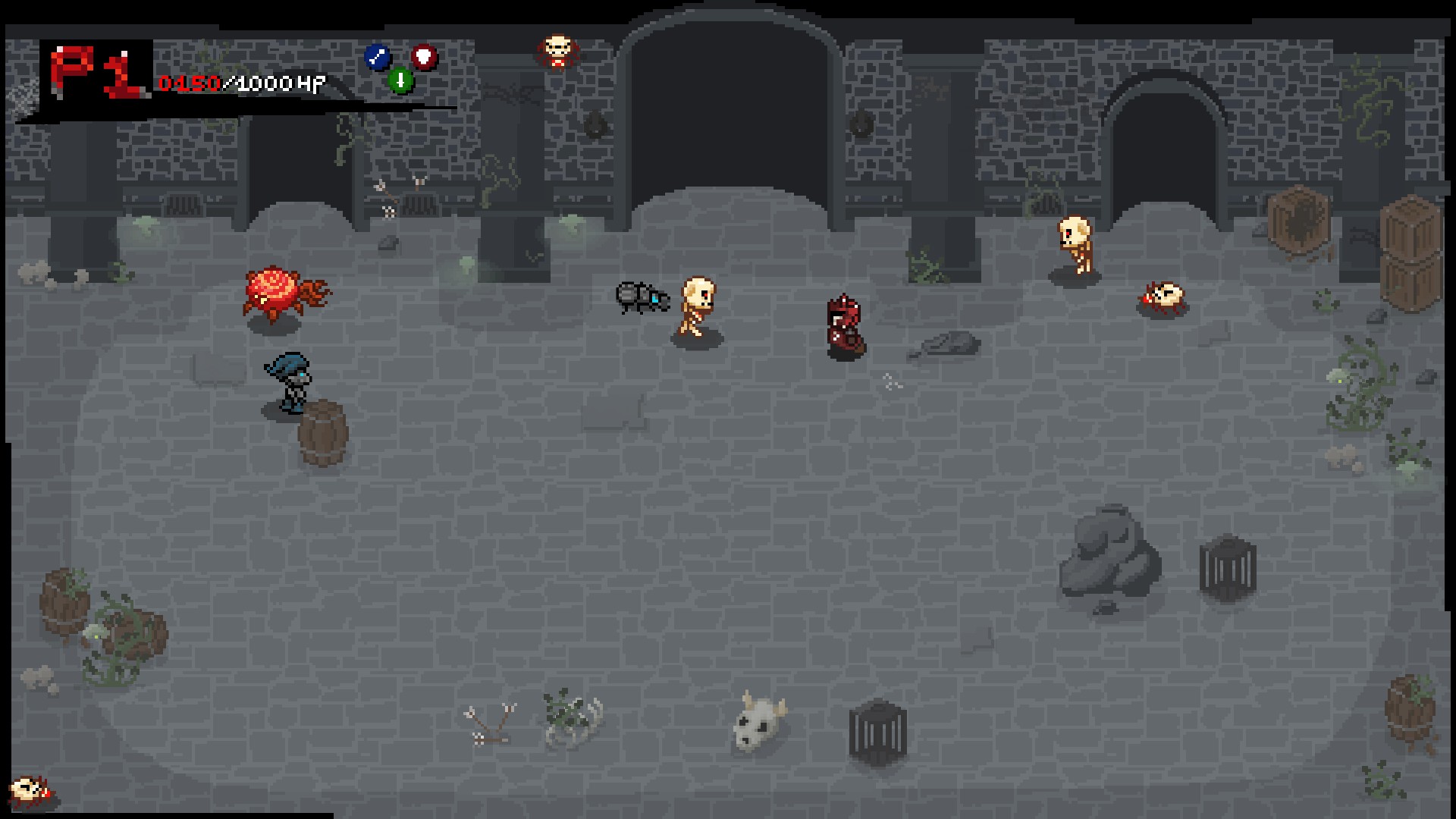 Other bugs are numerous. Controllers don’t work unless they’re turned on before starting the game. There are inconsistencies in hit indicators, which sometimes see you flash when you’re hit, sometimes have you making an annoying noise, and sometimes neither. Setting a target number of rooms in Floor mode also affect the next game in Crawl mode, effectively making the two game modes exactly the same. And the statistics screen reports values that are obviously false. The awful hit detection, though, may be the worst of all, where monsters (particularly bosses, for some reason) will swing and visibly miss you on screen, yet you’ll still be hit and take damage. In a game with such simple combat that kills you through attrition, with your hit points slowly withered away in room after room until you die, that’s another game-breaker right there.

Crimson Nights is disappointingly limited and seems as if it should be in Early Access.

Rather than a dungeon crawler, the game plays like a very simple arena brawler. There’s no progression of characters or story, only unrelated rooms filled with the same creatures over and over again. Combat, which is the only activity in the game, is repetitive, lifeless, and boring.