Geneshift is a multi-player twin-stick arena-style shooter with some tactical elements.

In Geneshift, you play a cybernetic mutant combat monster, practiced at dealing swift punishment to anything in your path. Well, that’s the way you’re portrayed, but really you just seem to be one of the majority, no more or less practiced at death-dealing than any of the many mutants around you.

Games in the top-down shooter genre often have difficulty in breathing life into the graphics, due to the somewhat-limited perspective. Characters, in particular, can often look like little more than coloured blobs with little parts that wiggle when they walk.

Geneshift renders everything in 3D from a camera looking straight down, but sadly fares no better than most in this regard. The characters — mutants, apparently — are less than impressive. Animations are functional, though quite slow, and with no real ‘wow’ factor. The character models themselves have no personality at all; each one is the same as almost all of the others.

The environments look quite nice, though, particularly with the excellent dynamic lighting, even if they do all look the same after a while. Everything moves smoothly, even when there’s a lot going on at once. Graphics and game options abound, too, so there’s a fair bit to customise if the defaults don’t quite suit. 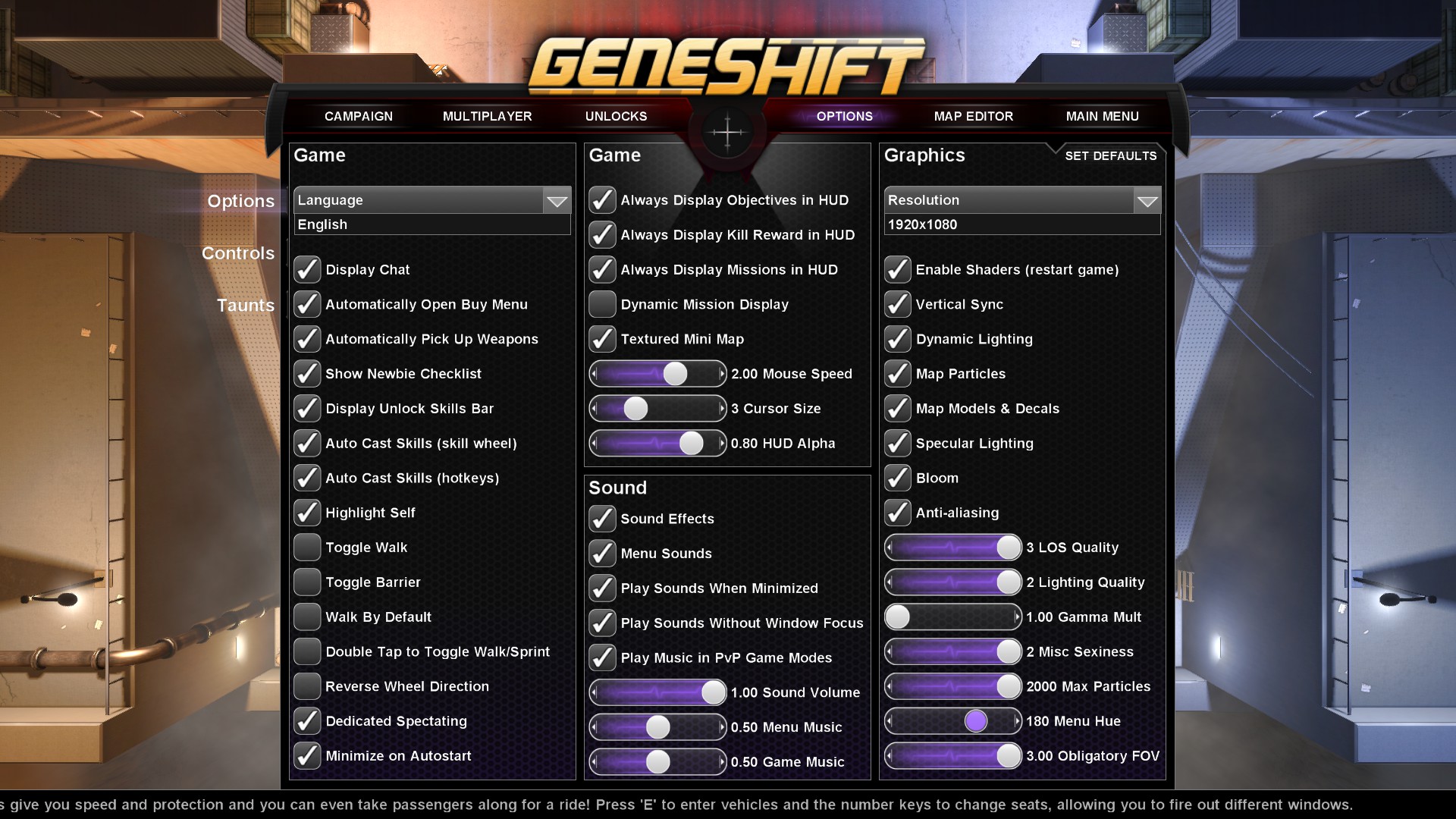 The interface is busy and overly confusing, with a general lack of tooltips that makes working out (and then remembering) what everything means more difficult than it should be. Even after hours of play I’m still finding tabs and options hidden away that I didn’t know were there, and still have trouble finding things that should be straightforward. There’s some help, sure, but it’s hidden away in a separate section of the interface (press F10) and any useful titbits are swamped in the great walls of text therein.

The title/menu music track suits the game well, but becomes quite repetitive. In-game music only seems to start playing at certain times — I’m not sure if it’s scripted or pseudo-random — and is similarly themed.

Sound effects are pretty good, with some nice gunshots. They get the job done well. There are no voices.

Geneshift is a science-fiction top-down twin-stick shooter that eschews the rogue-like elements becoming very common to the genre and instead focuses on arena-style multiplayer mayhem. Although Geneshift has a single-player campaign, there’s essentially no continuity between its levels: it plays like a series of multi-player arena maps, with bots instead of human players, and scripted events to move the fairly rudimentary story along. If you’re after an enthralling single-player twin-stick shooter, Geneshift is not the game for you.

The game plays essentially like any other twin-stick shooter, with left hand controlling movement and right hand controlling aiming and shooting. Mouse and keyboard controls are good for ‘core’ actions, but there are lots of other keys to remember for help, activating or swapping skills, using shields, and so on, so it can become overwhelming at first. I didn’t try using a controller.

Primary weapons are purchased or can be picked up. You start only with your knife, and the old saying about bringing a knife to a gunfight holds true here; you’ll quickly want to buy or find something else. You can only hold one weapon of each size and ammunition is in short supply, often cutting prolonged battles or guerrilla-style raids short as you turn tail and run for the nearest resupply point. 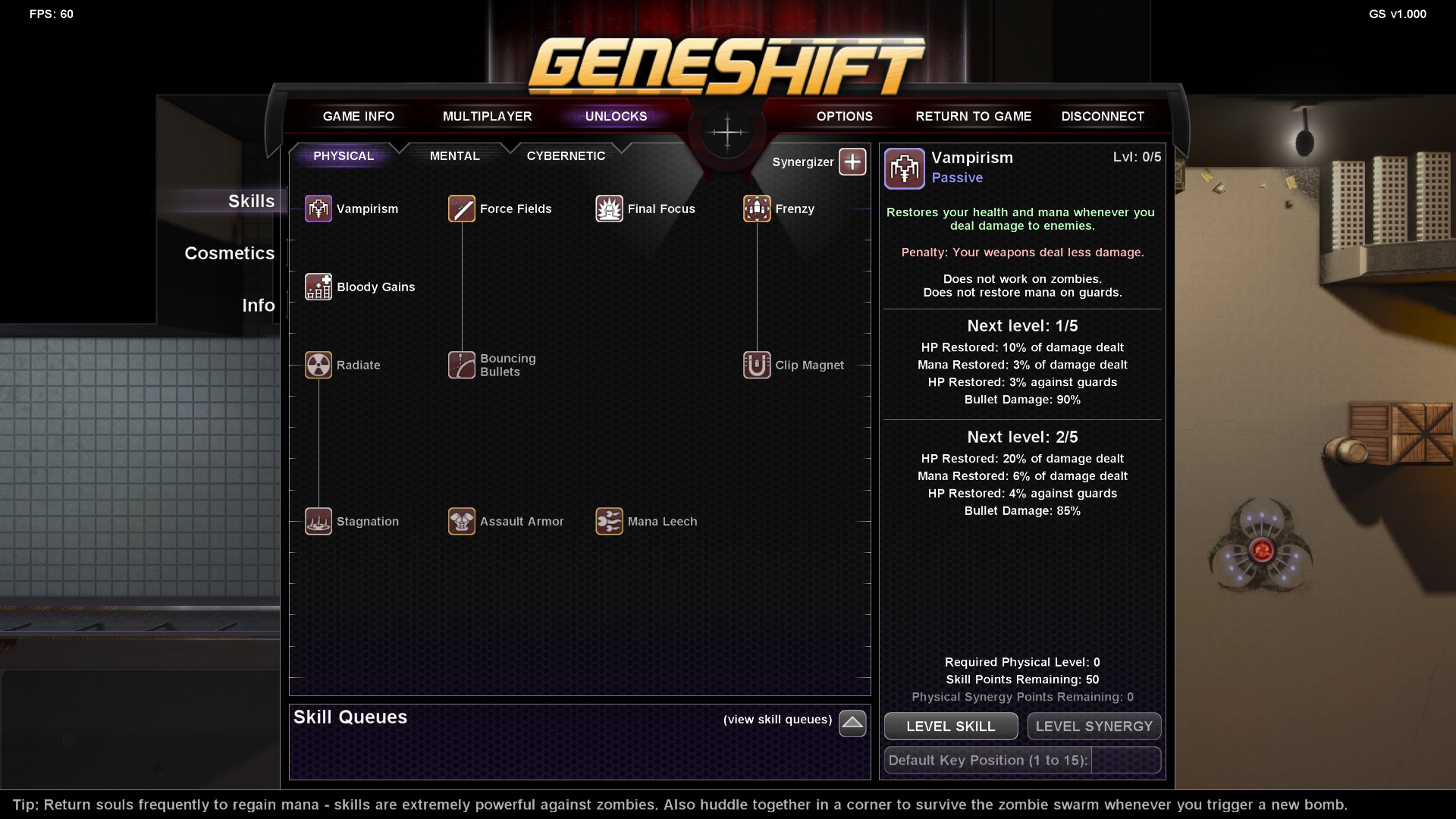 Skills are powered by mana, which I really can’t understand, given the mutant and cybernetic focus of the game. But plot isn’t Geneshift’s strong point. Once you unlock these and spend skill points on them you have quite a good selection available, with multiple levels of upgrades for each. Each one comes with a downside, though, so using a skill at the wrong time can both drain your mana, making your other skills unavailable, and also leave you exposed from the skill’s drawbacks.

Probably the most welcome addition to the genre from my point of view is that of vehicles that you can enter, and drive around. Get a team of your guys together and you can do some serious damage to your opponents, both from running them over and also shooting from the various seats in the car. These handle quite well, too, and can easily turn the tide in a large melee. 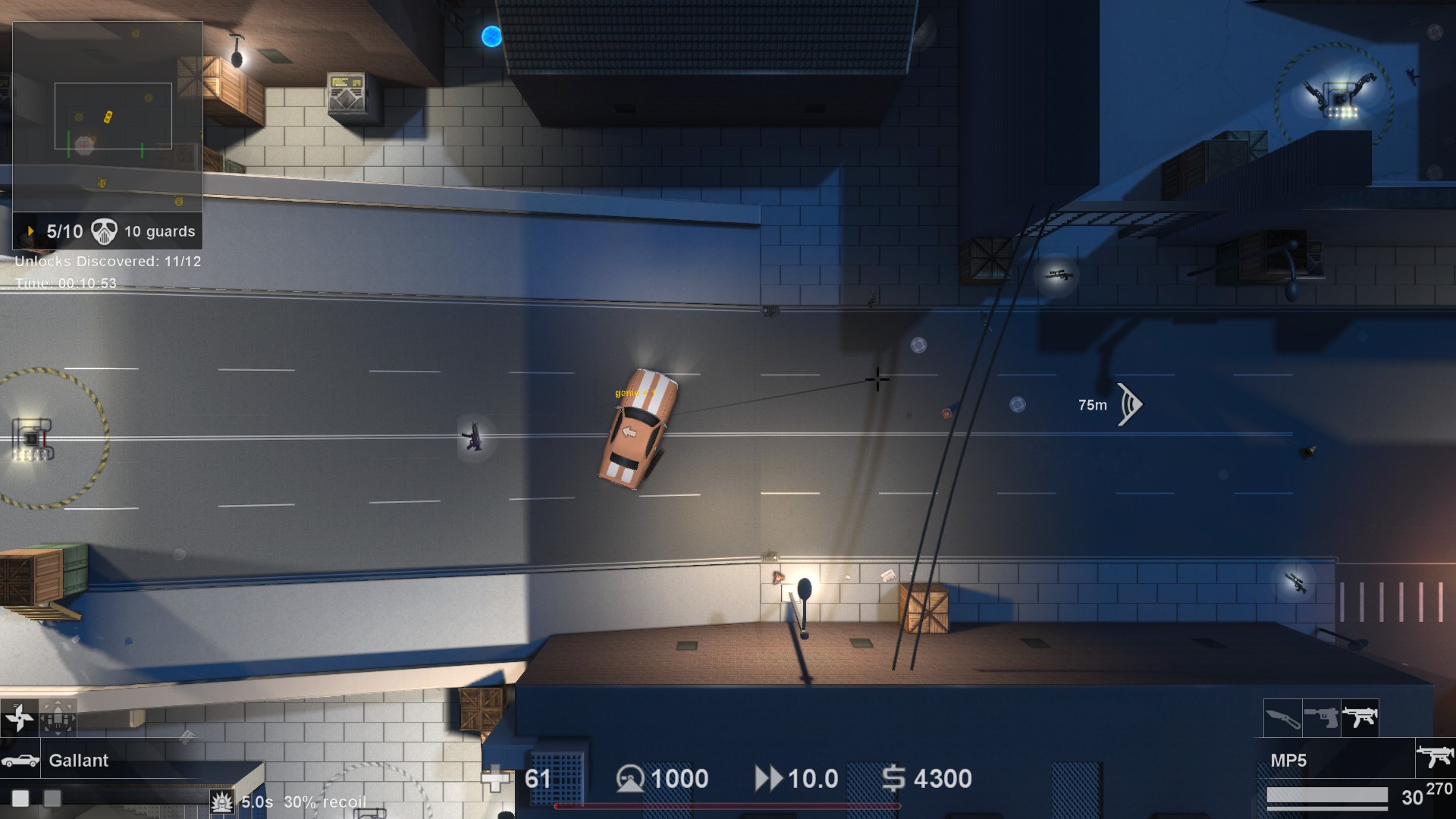 As far as the single-player campaign goes, you can choose from four difficulty levels, with only the first two available when you first start. Once you’ve completed the campaign once, the third difficulty unlocks, and a further completion at that level unlocks the final difficulty. Honestly, though, I think I’d rather eat a raw ghost chilli than sit through the entire campaign four times! As well as the general feeling of the campaign being ‘tacked on’ to make the game appeal to non-multi-player gamers, the script is pretty terrible (though with fairly good grammar, I must say) and there’s no saving mid-level, so make sure you can spare the time if you sit down to play it.

Multi player provides a number of game modes, but they mostly feel pretty similar to each other, even though they may have different victory conditions. At the moment there’s only one official server available (in the USA), and it was the only server to which I was able to connect. With no useful error messages available for the failed connections, I can’t even begin to investigate why. Ping times are high across the board, too, with the best I saw being about 250 ms — a huge disadvantage in a competitive multi-player action game. Given the multi-player focus of the game, though, I would expect server availability and the general experience to improve as the game moves through Early Access. 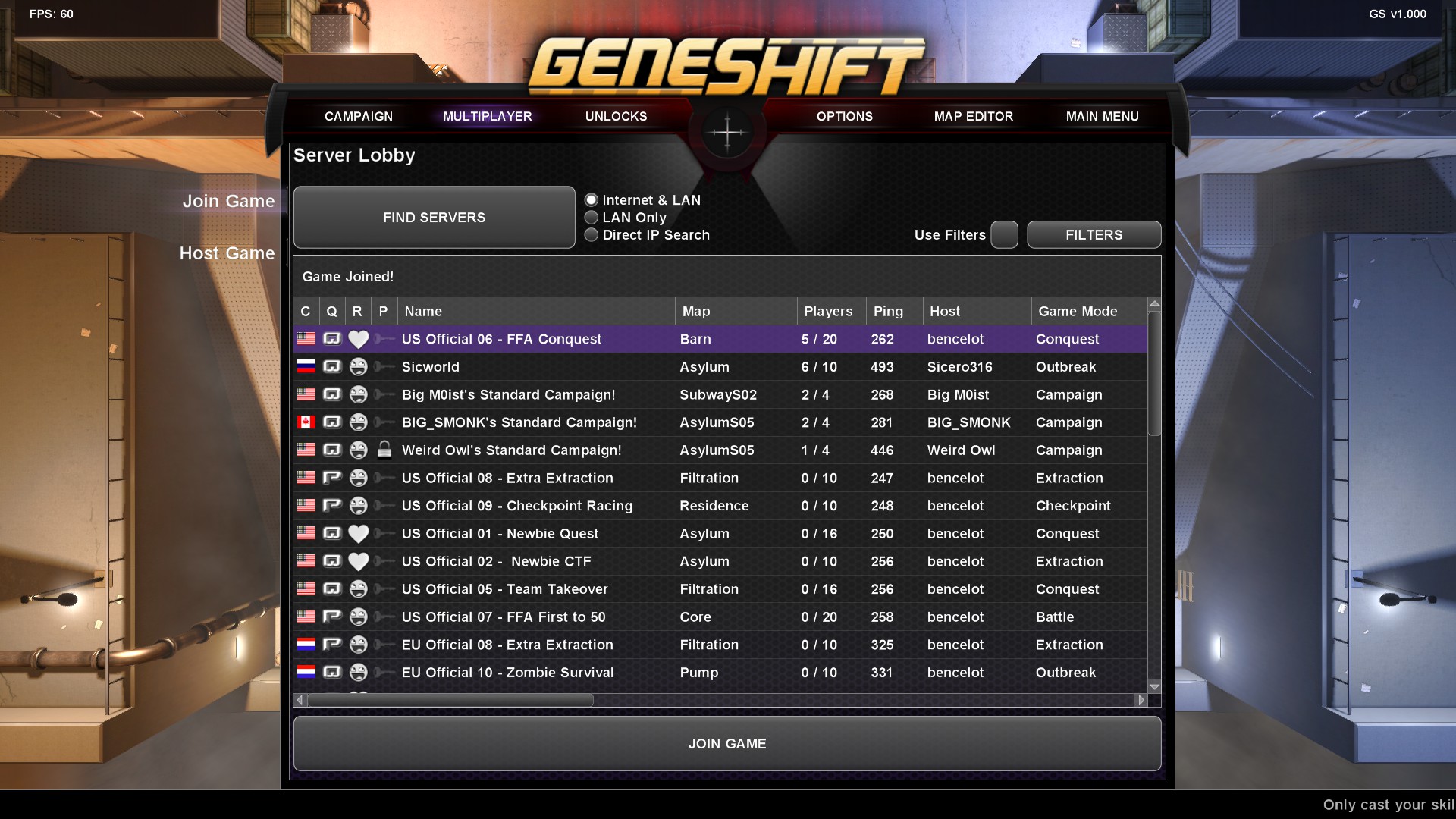 With the game still being in Early Access, one might expect some bugs and stability issues, but that doesn’t seem to be the case here; it’s very stable and seems essentially bug free. I’m not sure what else is planned for EA, but given the focus of the game, I think much more time spent on single player is probably going to be wasted, unless it is completely redesigned from scratch; the multi-player arenas are where the appeal of the game lies.

Geneshift is a mindless, but mildly entertaining single-player game. If you’re looking for the next campaign-based twin-stick shooter, then Geneshift probably isn’t it. But if you’re a fan of arena shooters and you’re in your element in top-down environments, then it’s probably worth watching. 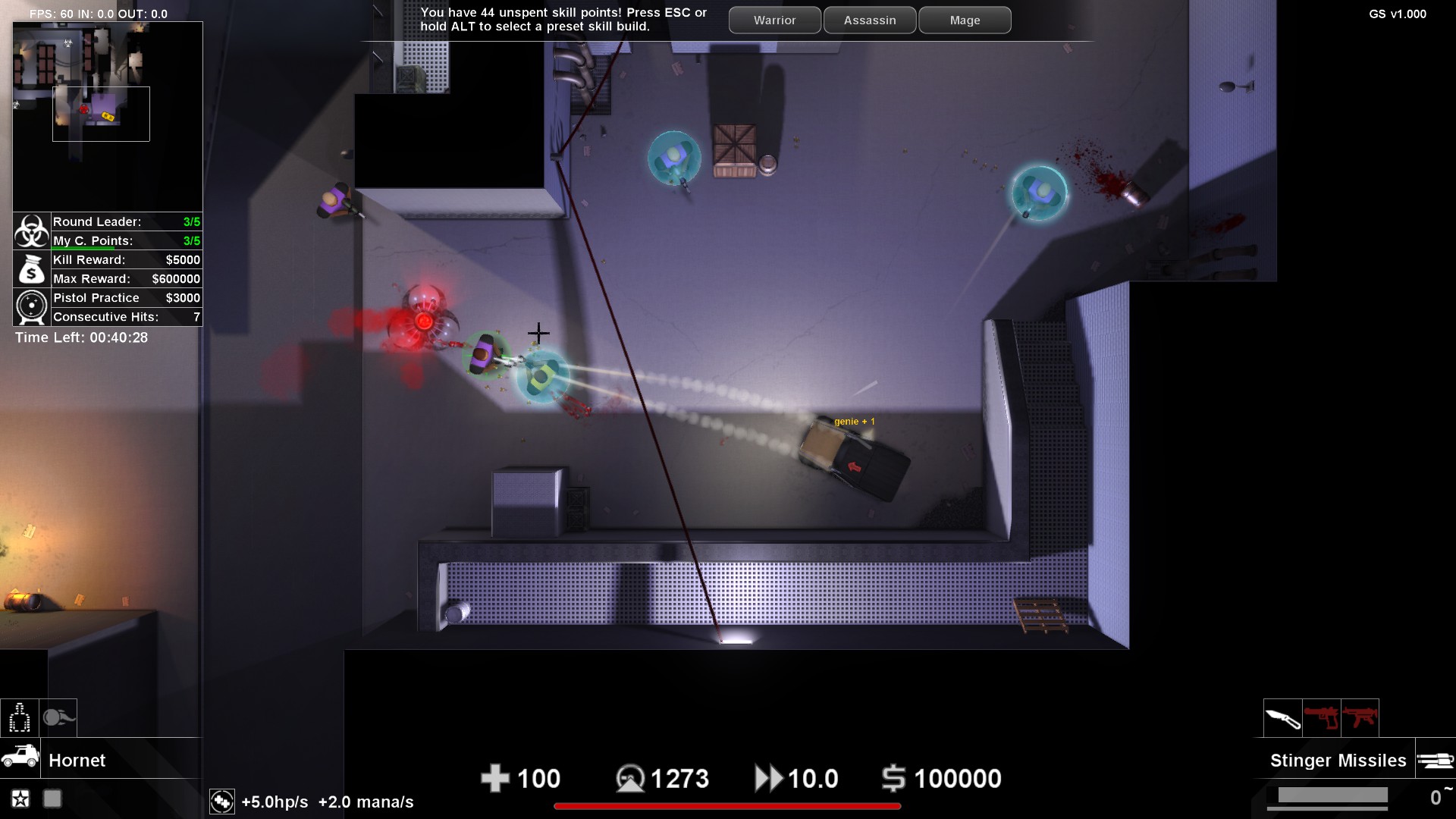