Strain Tactics is full of ideas to revolutionize squad-based tactical games, but do they work?

In Strain Tactics, you take the role of a newly cloned military commander, given a mobile base in the form of a helicopter, as well as a pilot, tactical AI unit, and a pair of minimally equipped combat engineers. Your task is to combat The Strain, an alien infectious organism that has all but taken over the Earth.

When they’re unmoving, the graphics in Strain Tactics look rather nice. Some of the effects are nicely animated, too, though the smoke can get a bit heavy, making it hard to see what you’re doing in some places.

When the graphics start moving, though, it’s a bit of a disappointment. Top-down graphics, and particularly animations, are hard to do well, and Strain Tactics doesn’t manage it. Animations are minimal at best, with most aliens and characters looking like they’re floating along the ground, with no life-like movements at all.

The interface, too, is disappointing and confusing. There are no tooltips at all, with the developers instead choosing to open up little overlapping windows that make it hard to see what anything does. Visibility into roofed structures is unrealistic, with your characters not being able to see inside at all until they’re right next to the doorway. 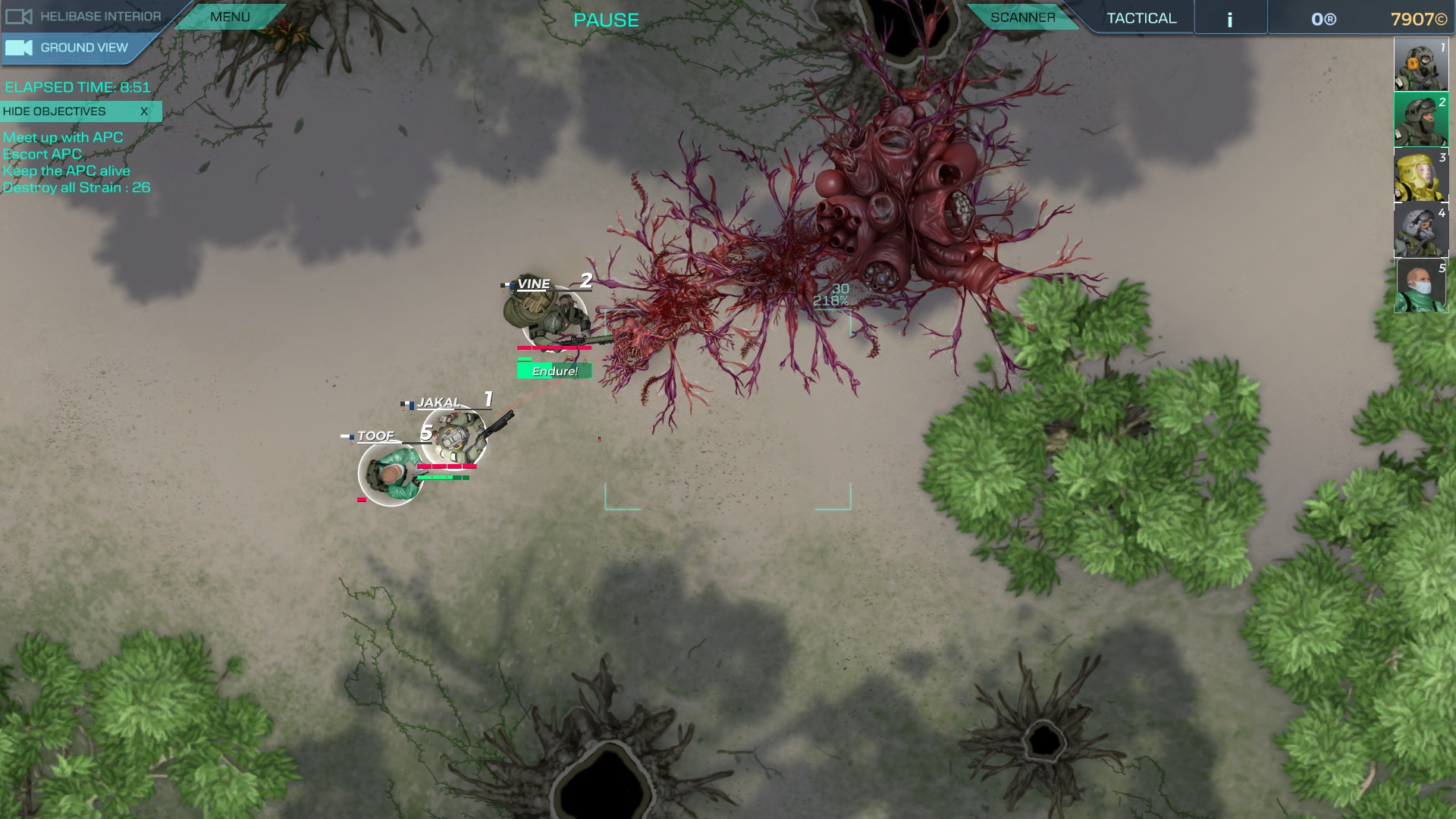 Sound is quite good. Music is slow and atmospheric, with a sort of progressive feel to it that fits the game well. Sound effects are mostly pretty good, too, with realistic gun and helicopter sounds, though the troop voices become grating fairly quickly.

Strain tactics plays like a small-scale top-down real-time strategy game, with a limited inventory and money instead of the resource gathering that is common to the genre. I’ll say straight up that in my opinion, it is most definitely not a “tactical ARPG that is set in a cyberpunk apocalypse”, as the Steam store page for the game claims.

The game begins with you being greeted after waking up from a “cryo vat”, where you’ve been cloned. Apparently, you were a hero in a big battle in the past, sacrificing yourself to blow up a spaceship infested with the alien Strain. It seems your heroism was in vain, however, as parts of the spaceship plummeted to Earth, with still-intact Strain aboard. You’re given command of a small squad in the terrestrial war against these infectious alien survivors, anyway.

The game is divided into a series of missions, which are unlocked by killing a certain number of enemies. If you don’t kill at least a certain amount in every mission, too, then your home base is attacked. This is an interesting mechanic that really doesn’t work early on, as the early missions don’t have enough enemies to kill to prevent the attacks. There are plenty of missions, so if you enjoy the game and do well enough, it should keep you busy for a long time. 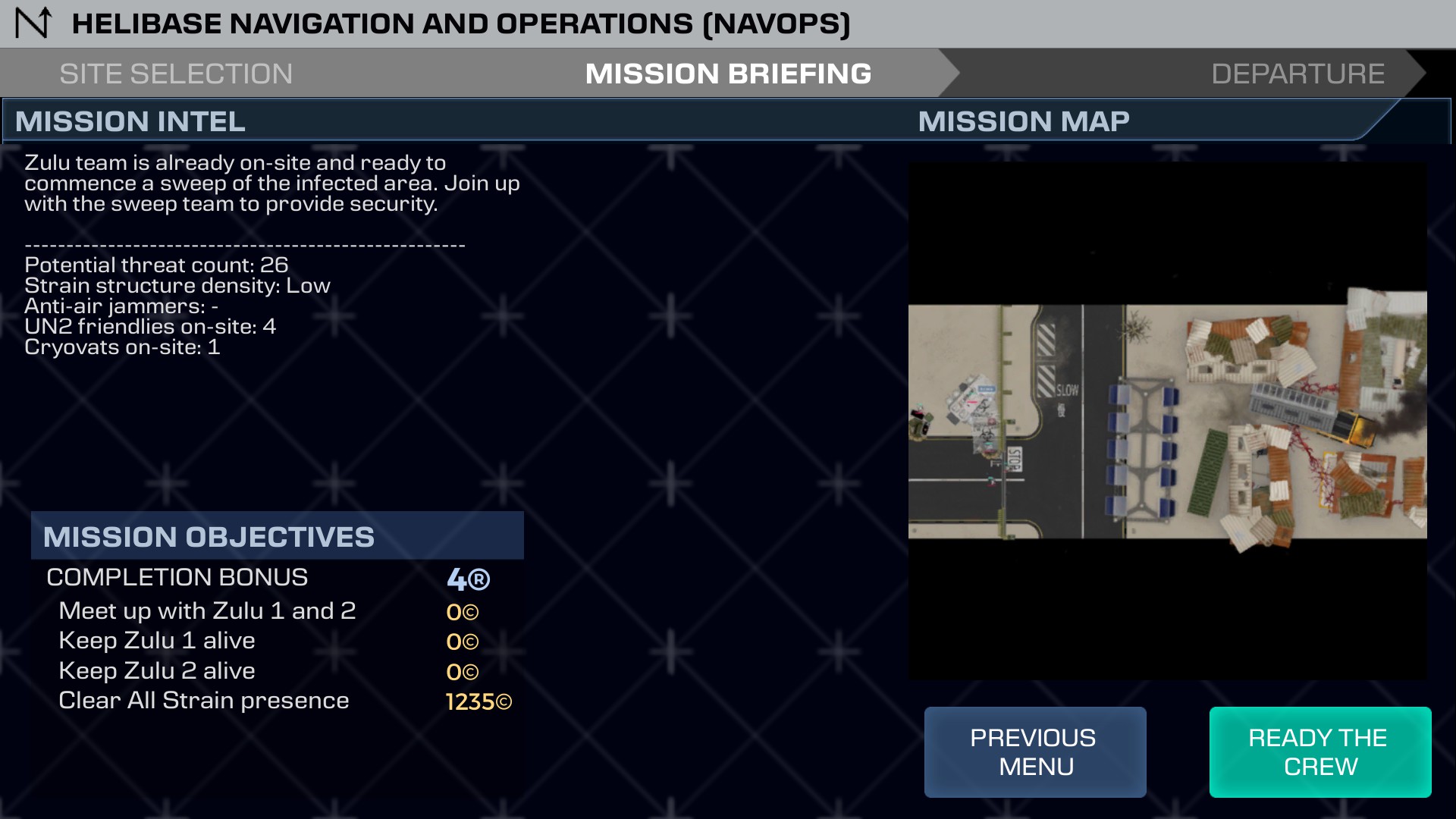 You’re given control of a mobile base: a helicopter. The helicopter is available constantly throughout your missions, allowing you to land and pick up or deploy troops anywhere the helicopter docking symbols are available. See a hole in the roof? Drop a guy into it. Want see what’s inside that containment bin? Land right next to it, deploy one of your troops, and open it up. It works pretty well, though having to pay so much for ammunition for its weapons is a bit disappointing.

You’re rewarded for missions with coins and reward points. You can use the former to purchase supplies from the shops and vending machines at the base and in some missions, as well as characters (up to a squad of five) from the cryo vats. The latter is used to unlock new characters and weapons, which you can then purchase using the coins as well.

The first things I noticed about the game were that the interface was strange and unwieldy: my characters moved frustratingly slowly, encouraging me to run around with only the minimum equipment because anything else was too slow to bear; and inventory management was interesting, with the different slot sizes governing what sizes of equipment you can carry, and where, but also very limited — why can my combat engineer only carry four apples and nothing else? 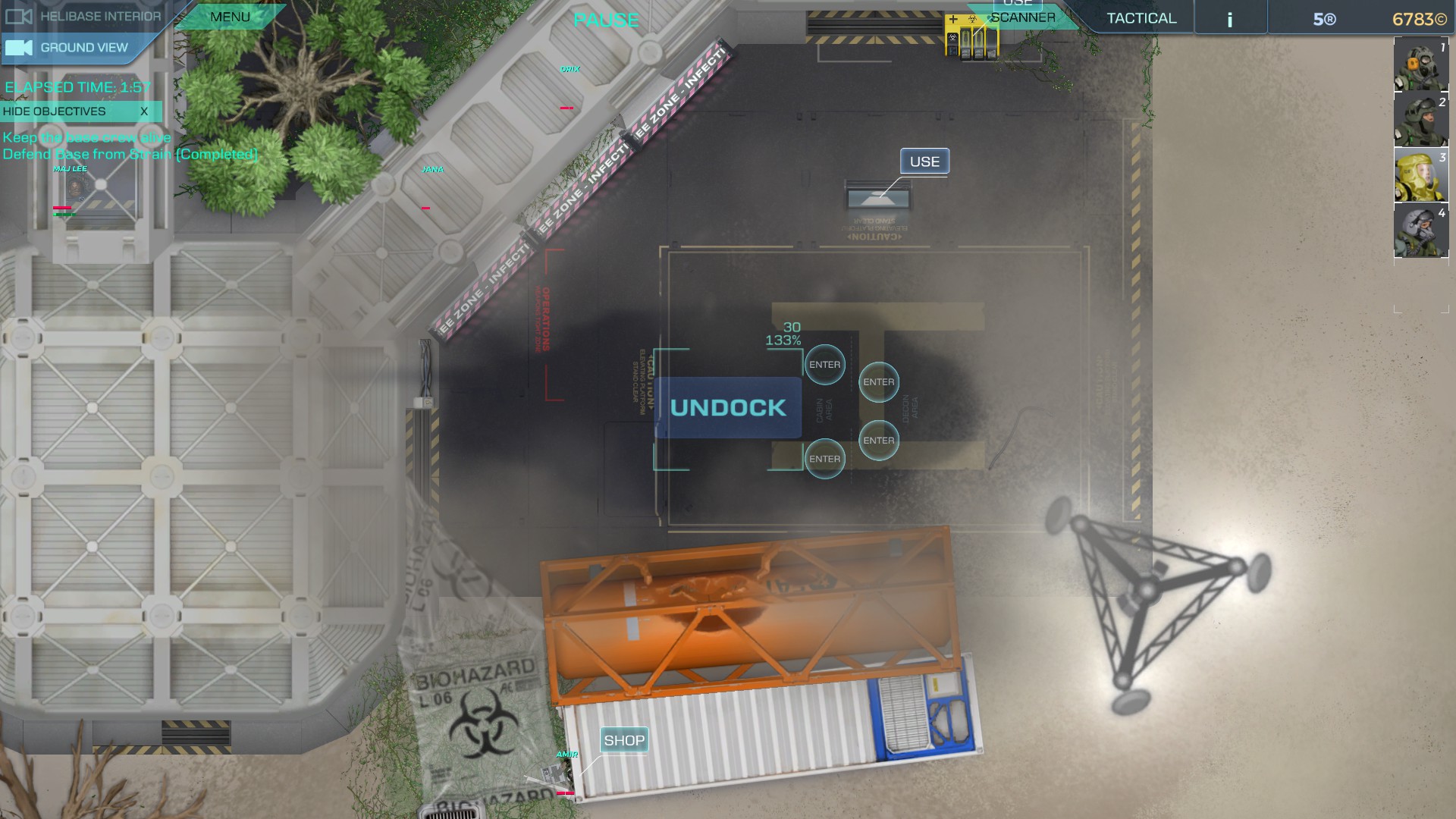 You control your troops with the mouse, but the developers seem to have decided to reinvent the interface for games like this from scratch, requiring you to meticulously plot the route your characters should follow by dragging the mouse to paint a path along the ground. It sounds cool, but in the heat of combat, it’s not. Seemingly realizing this, a recent patch added a right click to move, but the pathfinding is stupid, and your characters will blindly run into fire, alien ‘web’ traps, and anything else that will damage them. There are multiple movement options to keep your characters in their relative positions or to converge on your selected point, and different fire options, too, allowing you to saturate an area with gunfire or focus on a particular target. But whoever thought friendly fire would be a good idea in a game like this should be put in a cryopod! A lot of effort has gone into various AI features, too, and your troops should be much smarter than in other squad games.

But the game is pretty buggy, and none of this really works as it’s designed. Over and over again the game refuses to detect a good portion of my mouse clicks (both left and right), so I end up sending the wrong character somewhere, or not moving, or not firing, or not doing any of a host of other things. The AI ideas, while sounding good, are broken, too. Characters decide to run away for no apparent reason (such as when they’re in the helicopter, at base, with no enemies around), or even worse, attack another character. The paranoia and blindness effects are ridiculously overpowered, too, though I suspect that’s by design. At least the writing isn’t too bad for an indie game, though I did see a few errors. 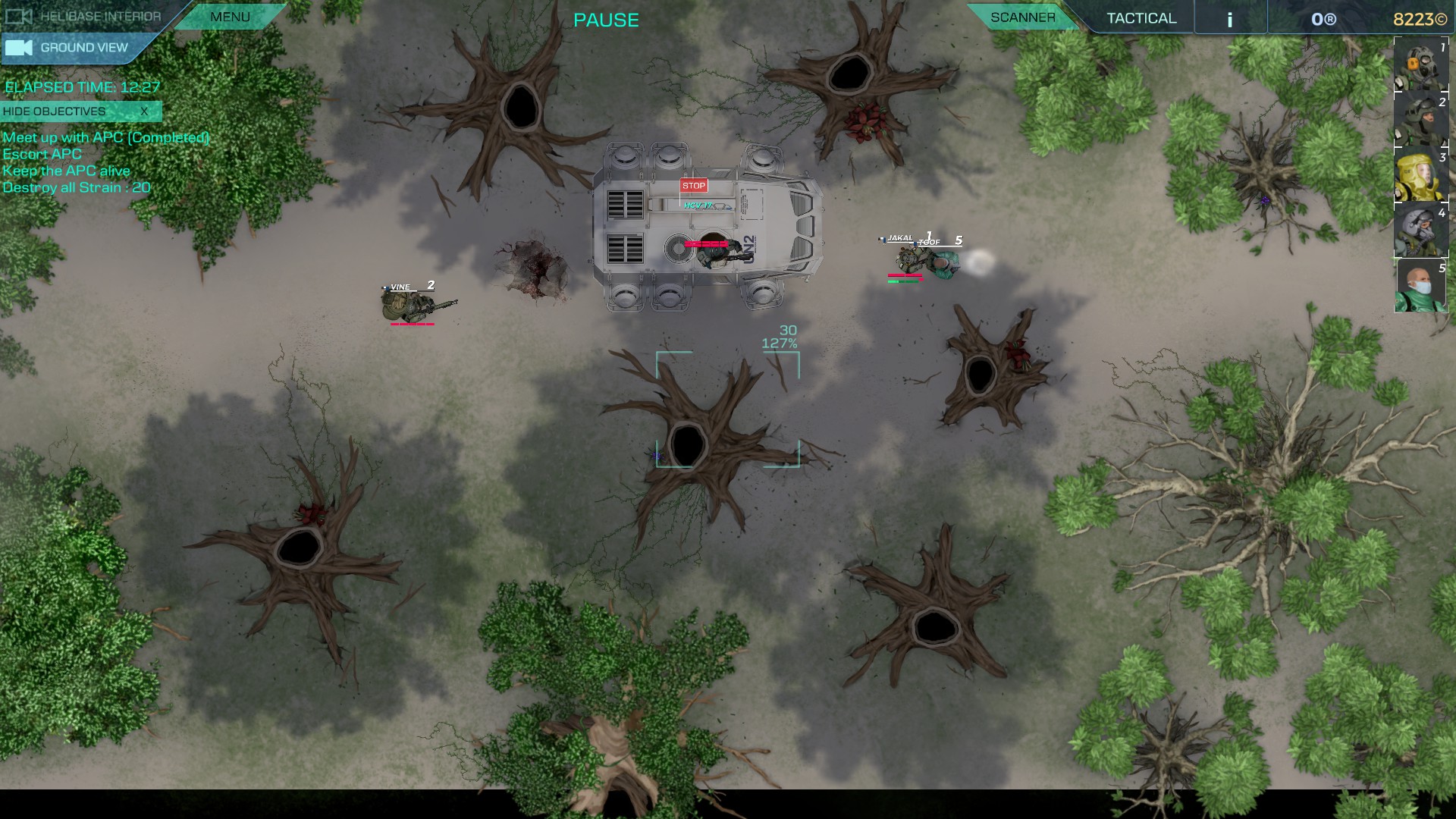 I’ve included a short gameplay video after playing the game for over three hours and having already completed the chosen mission once, so I knew what was coming. You can see how much trouble I still had with the game’s rather broken interface. You can also see one of the game-breaking bugs in the first few minutes: while I’m looking at a mission briefing, one of my soldiers decides to kill one of the others in the helicopter for no reason. Reload.

Pros:
+ Some interesting gameplay elements make one think about combat differently
+ Good AI ideas for your squad, but …
+ Active developers
+ Lots of missions

Strain Tactics is an interesting game, which is seriously marred by a number of issues, potentially the most damaging being the clunky, confusing, and hard-to-use interface. If it were turn-based it wouldn’t matter so much, as your troops wouldn’t keep dying before you can get them to do what you want them to, but with real-time combat, I found the game much more frustrating than enjoyable.

The developers are active, though, so I’m hoping they rework the interface entirely and fix the AI issues as well. Rewriting the short description for the Steam page would be a good idea, too, as it’s misleading as to the nature of the game and its target audience. I’m a big fan of ARPGs, cyberpunk, and other tactical squad-based games, but in my opinion, Strain Tactics is not like any of those things.