Jalopy is a unique driving game with rogue-like elements. Set out across Eastern Europe in your old Jalopy.

In Jalopy, you play an unnamed person living on the outskirts of Berlin, going on a road trip through the beautiful European countryside in your newly repaired Laika two-stroke automobile. The old jalopy breaks down often, so you’ll need to be handy with a spanner, and it needs near-constant attention: fuel, oil, wiper fluid, tyres, … . If you don’t keep on top of maintenance, you’ll end up stuck on the side of the road. And if you don’t find any way of making money on your trip, your meagre savings are sure to run out before you reach your destination.

The graphics in Jalopy are functional rather than beautiful, much like its portrayal of the Eastern European landscape in which it is set. The game is rendered in three dimensions and played from a first-person perspective, but the game world is made up of very-low-polygon models and plain-coloured textures, though with some nice dynamic lighting. The plain and rather blocky graphics have some appeal, but it doesn’t take too long for the drab landscape to become a bit boring. This may well be the developer’s intention, given the setting. Speech bubbles from characters are a bit too big and intrusive for my liking, but again it’s a deliberate style that’s been chosen, and they work well enough.

The standard Unity graphical detail settings have been retained, accessible only from the Unity launcher, and not in game. I haven’t noticed any performance issues at maximum detail. 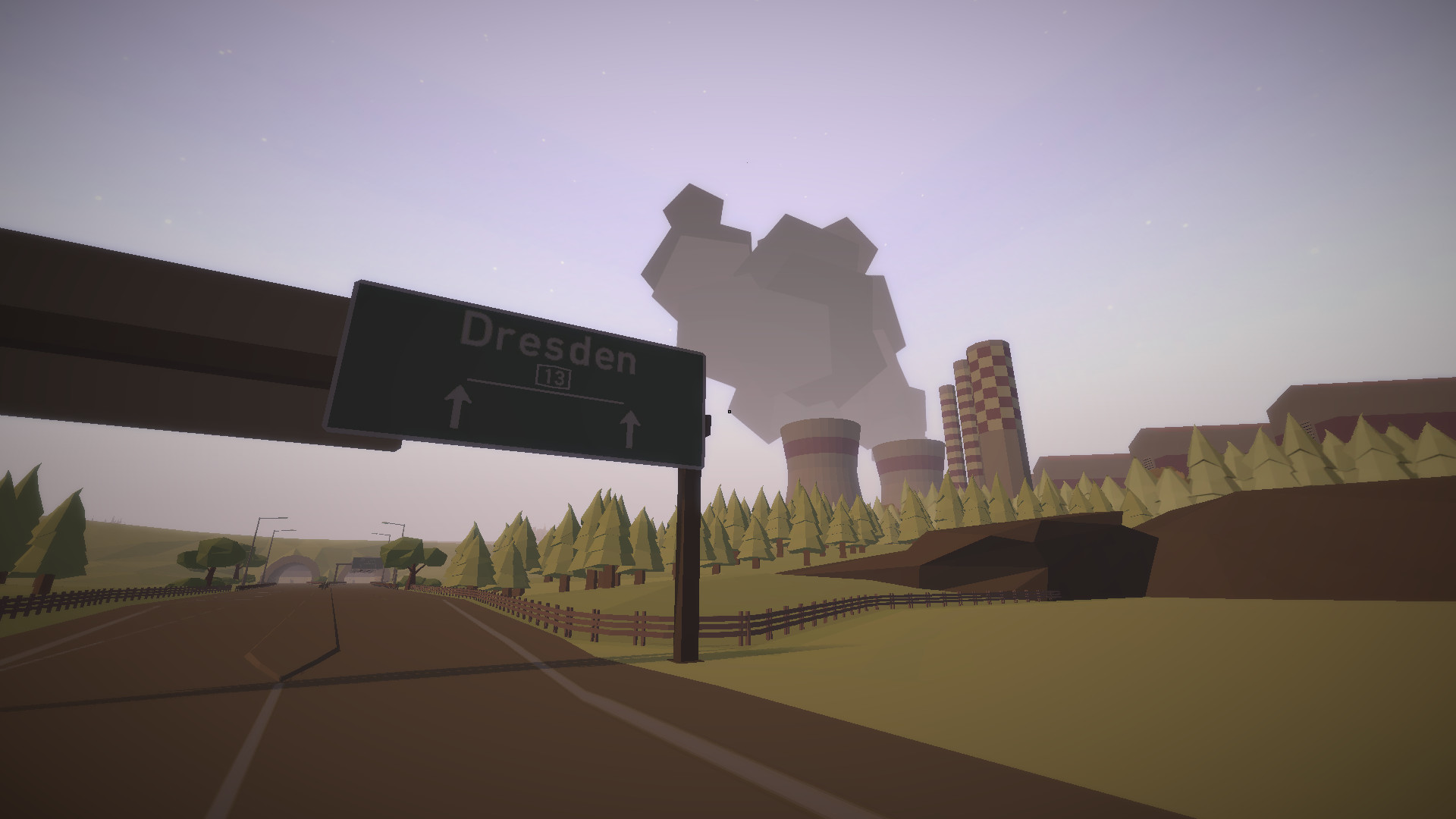 Sound effects are quite variable in quality. The engine sound is very weedy, but suits the old jalopy quite well, I think. Rain sounds are good, and other cars sound fine. Tyre sounds, though, are terrible. The first time I went driving off road in the wet I had no idea what that weird sound was supposed to be until I noticed the car sliding out.

There’s music on the radio in the car. It fits the setting well, but isn’t really the sort of music I listen to for enjoyment, so I tend to turn the radio off instead.

There are no voiceovers for characters in the game; everything is done in text.

Jalopy starts with a brief tutorial; you wake up in your sparsely furnished garage / apartment to find a man (a friend, presumably) presenting you with an old car that he has acquired: a two-stroke Laika 601 Deluxe, the jewel of the East German car manufacturing industry. It’s lacking one door, and wheels, and all of the important components from the engine bay, but other than that it’s ready to go!

The tutorial guides you through installing all of the parts in the car (you have a well-stocked garage for just this eventuality), and then throws you into the game proper. You’re given a car user’s manual and a map and off you go on your pre-determined tour of the countryside, with $100 to your name. The tutorial doesn’t really give you any information on what you’re supposed to do in the game, though, so be prepared for trial and error and a few false starts.

The locations you visit each time you play seem to be the same, but you’re given a choice of three different routes. I think the roads you follow are procedurally generated to a degree, or at least the events that can occur on the way must be, as they haven’t been exactly the same each time I’ve played, but they are definitely very similar, so the building blocks must be very large or limited in placement. And the game seems to be structured to force you to stay in a motel each time you reach a destination, as border gates are only open during the day and time doesn’t advance unless you’re on your journey. 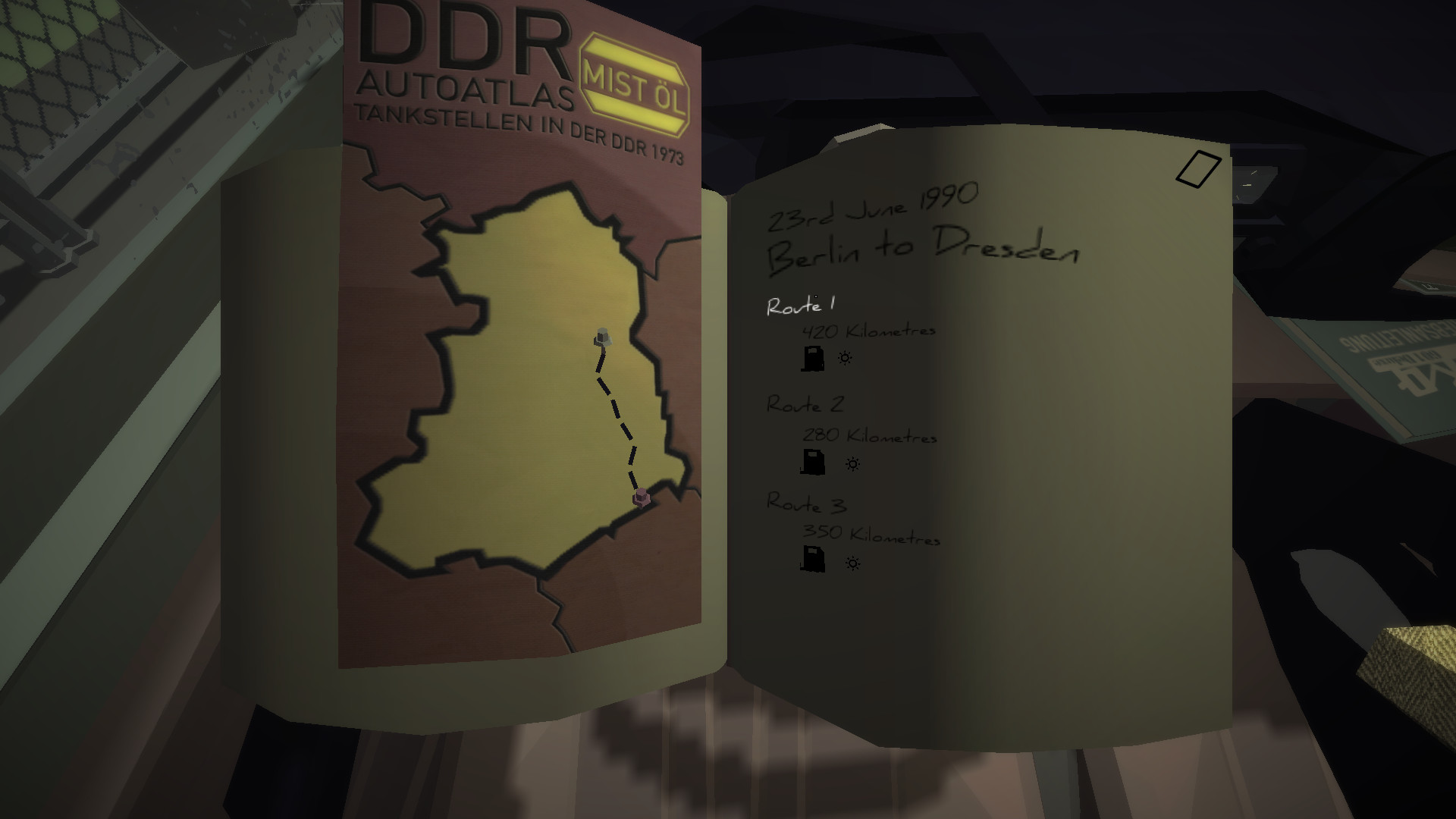 Jalopy is played from a first-person view, and I had a bit of trouble getting a sense for the size of the car while driving. There’s partial controller support, but it’s still a bit clunky, so I ended up playing with the recommended mouse and keyboard. WASD controls your character’s movements as well the car’s, and the mouse controls looking around and interacting with the environment, including activating or deactivating the car’s various features. The rest of the controls are far less standard, and can’t be changed (or even examined) in game; you have to quit and use the Unity launcher for that instead. Oh, the limit of three held items makes inventory management tiresome and frustrating.

Car control is okay, but not fantastic; a controller’s analogue stick should be much better here than the recommended keyboard and mouse, as the digital nature of A/D keyboard steering is not very realistic or enjoyable. When it starts raining or you’re on dirt roads, though, your dry road tyres wear quickly, and when it’s both raining and dirt roads, the car turns into a wet noodle. It’s rather unrealistic, but adds a welcome change, and a reason to buy different tyres.

I really like the idea of Jalopy, with its rogue-like elements mixed with its tongue-in-cheek attitude, but at the moment there just doesn’t seem to be that much to do. You pick a route to your next destination, keep an eye out for boxes on the side of the road that you can loot, try to fix your car (if you have the tools) when it breaks down, which seems to happen once on every section of your trip, and then fill up with the essentials when you reach the next town. There’s only very limited interaction with the few NPCs you’ll find, and the road sections that make up most of the game tend to blur into each other after a while, with the graphical style that seems charming and unique at first eventually becoming a bit bland and dull, and virtually unpopulated. 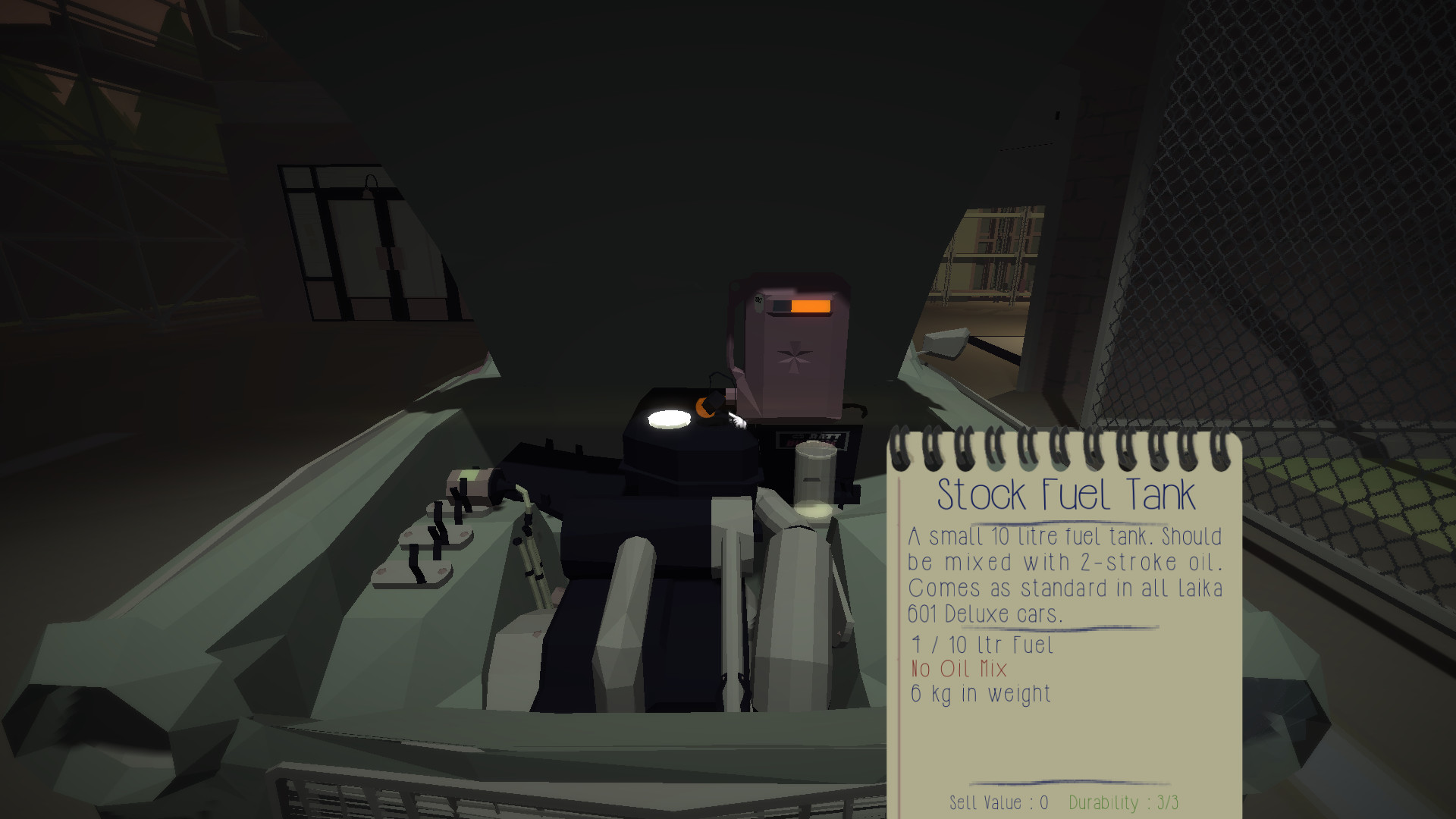 It’s buggy, too, even though it’s been in Early Access for just about a year now. The developer is still active, and many of the bugs may be addressed with time, but at the moment it’s rather unstable. The worst issue I’ve encountered is a game-breaker, with the game deciding to let me remove items from the trunk, but not replace them, or put anything else in. This is a long-standing issue that was first reported in the forums last year, and given that it prevents you from being able to store or transport anything in the car, it’s a big problem. I also had a game-breaking bug where I couldn’t do anything at a border checkpoint; the game wouldn’t let me pass my papers to the gate guard, but I also couldn’t start the car or get out.

Other gameplay issues I’ve seen are less serious, but still annoying, such as other drivers speeding up behind you to crash into you, leaving you with a fine to pay. There are some weird graphical problems, too. The tutorial man is wearing a jacket with weird textures. There are holes/cracks in geometry in some places, and the smoke and dust effects look bad in the game’s plain style; some transparency would really help. I also noticed something very weird with the moon at night, where it seemed to be hidden behind something, and the sun rises in front of the distant mountains. Oh, and why does my car make dust clouds that float leisurely away on the breeze in the rain? 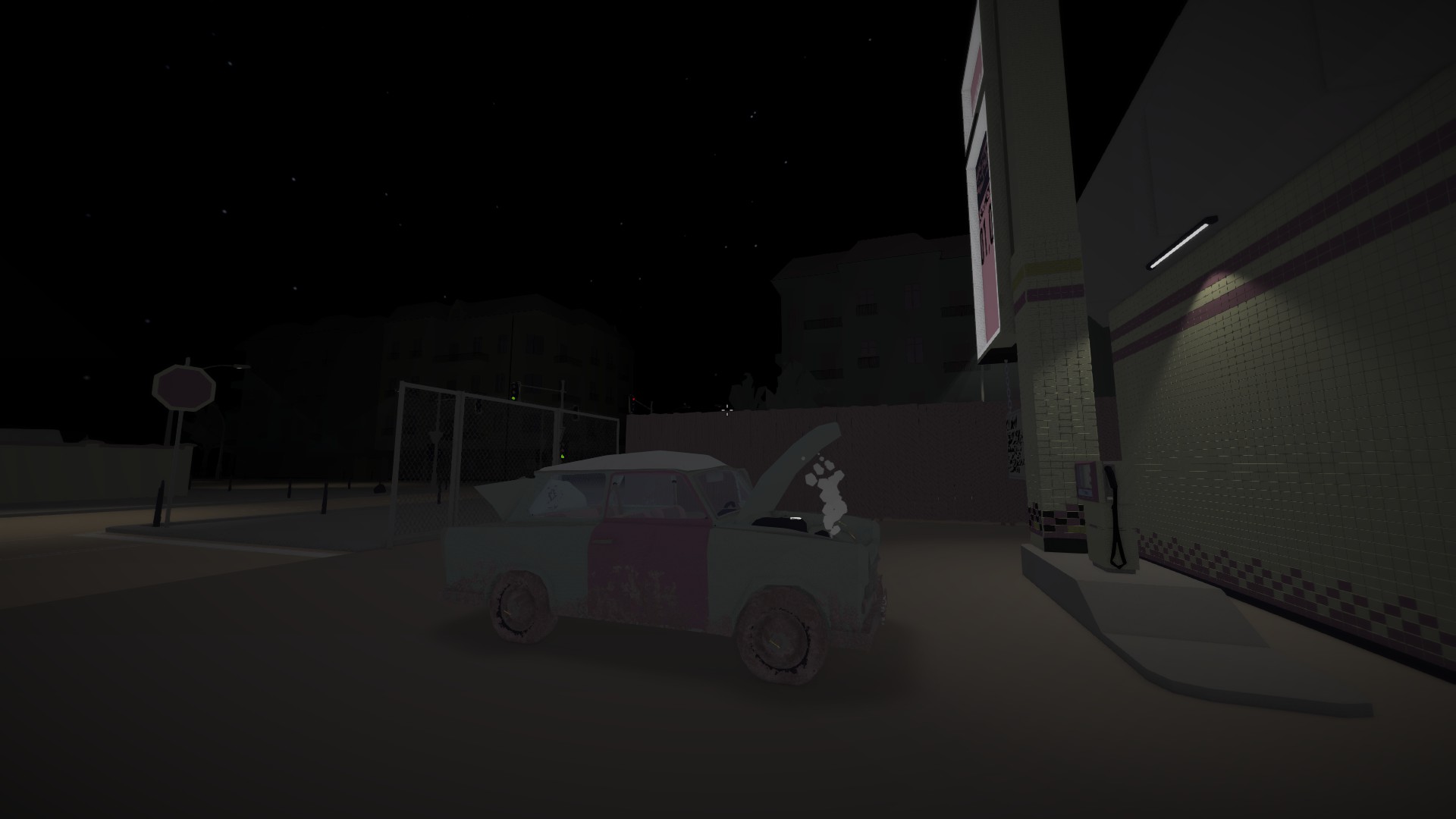 Cons:
– Very buggy
– Hard to get into
– The world seems very underpopulated, almost deserted
– Some control issues
– Some graphical issues

Jalopy is rather like the jalopy in the game; it’s a bit hard to get into, it’s pretty rough around the edges, and it often breaks down.

There’s an interesting and unique game in there, but at the moment it’s hidden by gameplay and graphical issues. Still, I’m looking forward to seeing what Jalopy will become as it finishes its journey through Early Access.