Necropolis is a rogue-like action role-playing game with a unique graphical style and a good sense of humour, but flaws and limitations leave it falling short of its potential.

In Necropolis, you play an adventurer of one of two character classes — Brute or Blackguard — entering the great Necropolis in search of fame and treasure. You are greeted as you enter by the ancient keeper of the Necropolis and all-round nice ‘guy’. It offers you hints and tips, as well as quests to complete for its favour, which you can then use to advance your character’s abilities. It also makes various sarcastic comments when you die.

The graphics in Necropolis have a unique and consistent feel to them. There are some large polygons and sharp edges, but also some great dynamic lighting effects and nice cartoonish textures. Together they combine to give a nice, moody, dark comic type of atmosphere.

The appeal is reduced somewhat by the rather impersonal character choices; even with only two classes to choose from, they could have allowed more customisation than some colour changes. Similarly, animations are a bit of a letdown, seeming a bit wooden and not well combined. The environments, too, which look quite nice and atmospheric when you first see them, quickly become bland and repetitive, with very little variation. 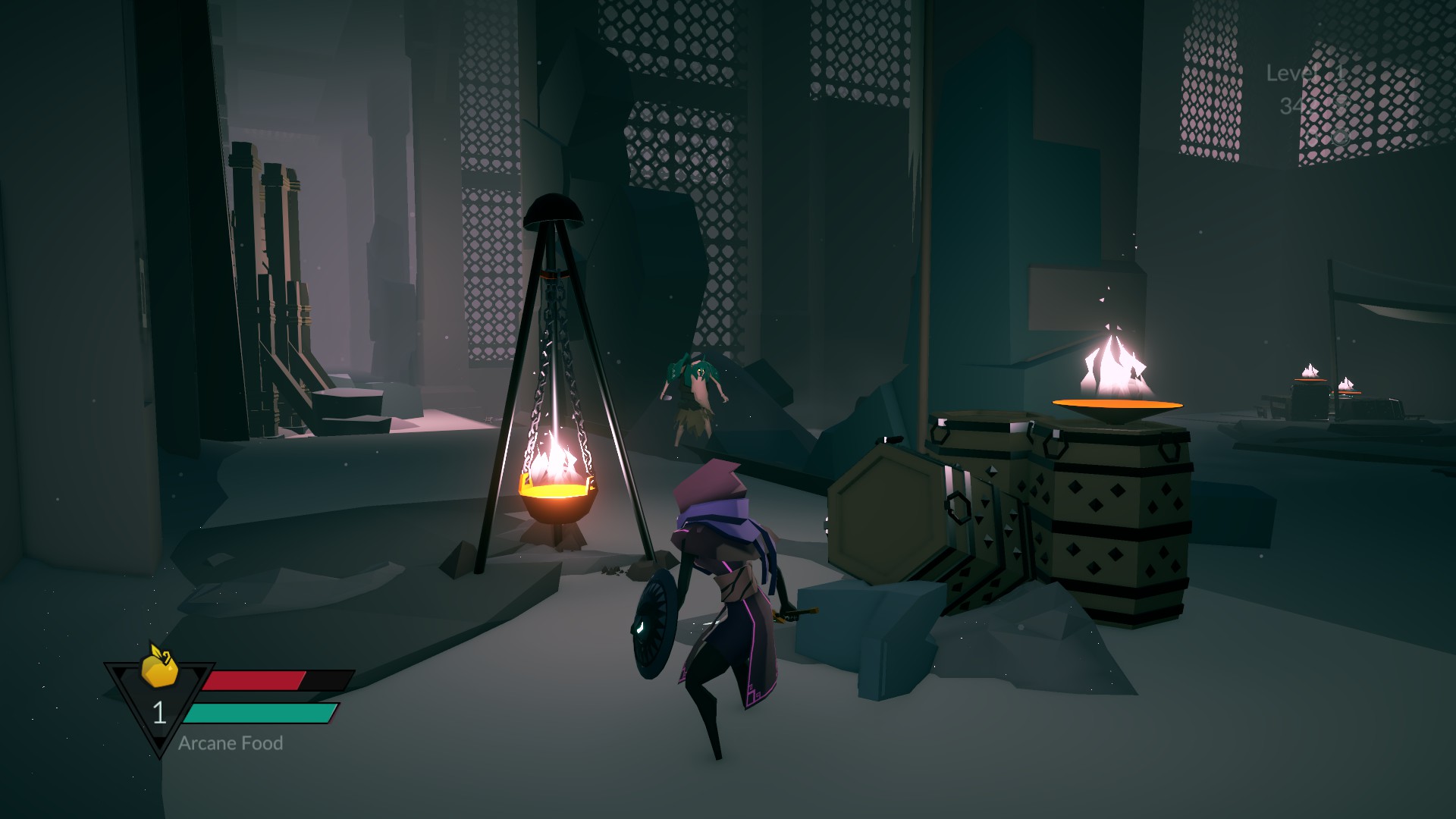 The user interface is simple, but a little lacking. It all works, but just looks and feels a bit clunky, especially with the bugs. For example, looking at empty slots on your inventory tab will show descriptions of items ‘beneath’ them in your crafting tab.

There are plenty of graphics options to play around with if you experience performance issues with everything turned up to maximum, but there aren’t any useful descriptions or tooltips for any of them, and not all of them are self-explanatory. I’ve noticed, too, that when playing in full screen in Windows 10 with the Windows taskbar locked, the taskbar will appear on top of the game. It’s not game breaking, but it is annoying.

Music is great, with a broody, minimalistic sort of instrumental theme that drips atmosphere; it’s absolutely perfect for the game. Sound effects are pretty good, too, but player characters should make a bit more noise when they get attacked; sometimes it’s hard to tell when an enemy has hit you.

There are no real voices, but there are some sections with gibberish speech and subtitles. These work quite well.

Necropolis is a three-dimensional action role-playing game (ARPG), viewed from a floating third-person camera. On your quest through the strange environment of the necropolis, you’ll collect items and gems (the game’s currency) and destroy countless enemies. It’s a format that’s pretty common and beyond the rogue-like elements, Necropolis doesn’t really break any new ground.

The basic gameplay is hack-and-slash, with a little bit of simple platforming in some parts as well. You have control over your left hand (shield) and right hand (weapon), and each has a primary and secondary use: your shield can block and shield bash, and your weapon can do a light and a heavy attack. You can also hold down the attack buttons to charge up a ‘power attack’; use this with caution as it depletes your stamina very quickly. Other than that you have a small inventory and you can collect food, potions, scrolls, and that’s about it. Oh, yes, there’s a basic crafting system, too, which works quite well, but you have to find recipes first.

The first thing you’ll notice if you try to play the game with keyboard and mouse is that the controls are shocking, and can’t be remapped. It’s almost unforgivable to not allow control reconfiguration in a game like this. Thank Abraxis, then, that the game has full controller support and it works pretty well.

The next thing you may notice is that there’s no map: no full-screen map or minimap. What were they thinking!? The procedural level generation works pretty well and creates some interesting levels and rooms, but when you have five doors with long corridors all leading away from one room and doubling back on each other, and … well, let’s just say that not having a map of any kind is rather frustrating. On some levels I probably spent more time wandering around trying to remember how to get to the already-found exit than I did actually playing the level.

After that, I hate to say, the list of disappointments grew. There’s not enough in-game information on what some things do. For example, what does “Son of Erebo” mean, other than that you have clothes of a different colour? The game is still very buggy, too, with some serious enemy pathfinding issues, and it’s been eight months since its last update. And there are only two classes! Two!? Even the pre-release information for the game mentioned three, and some information you can find out there suggests four. 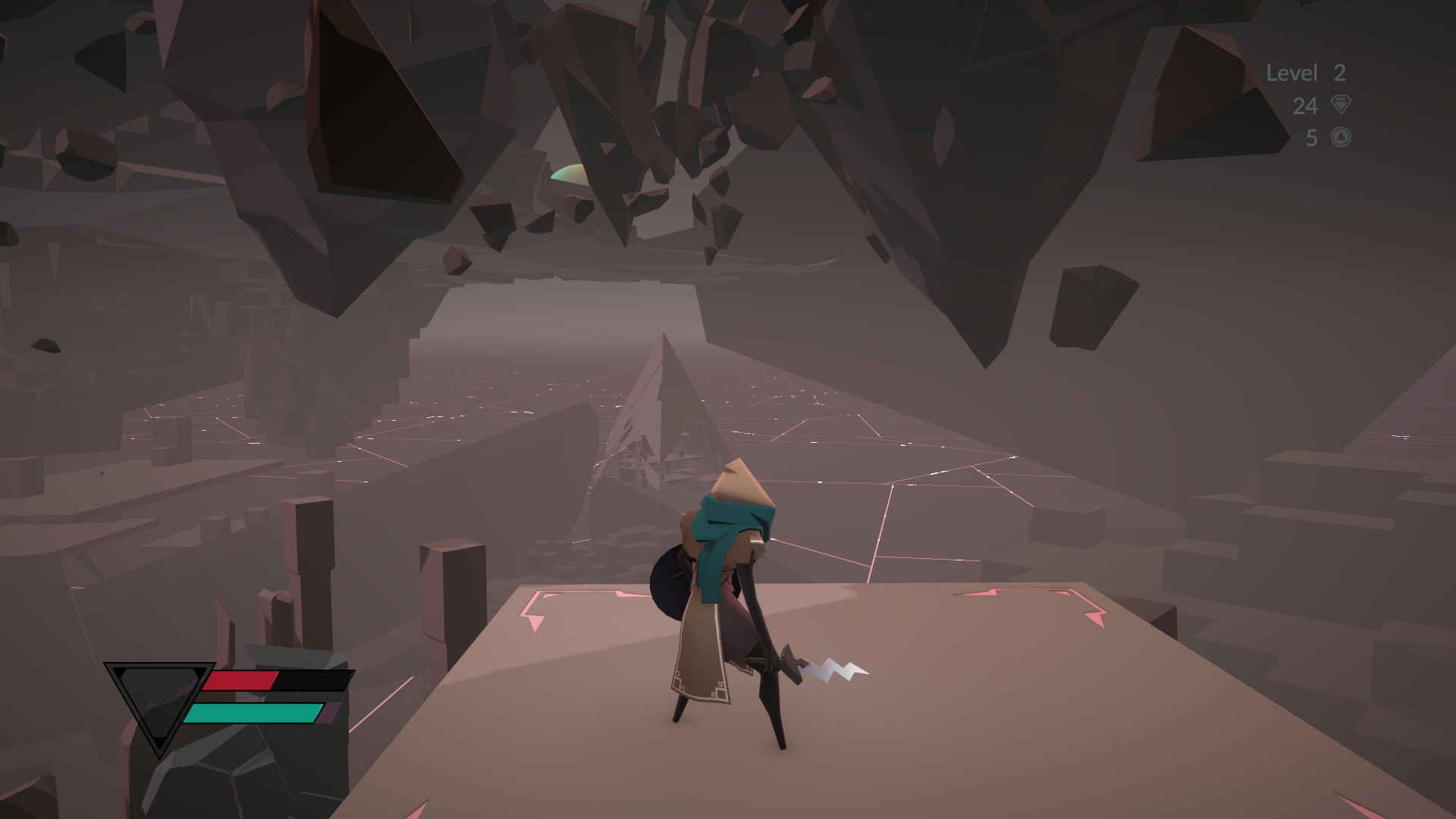 Along with the unique graphical style, the rogue-like elements in Necropolis are where it really shines, and they’re part of its core gameplay: permadeath; procedural generation of levels; and Nethack-style unidentified potions and scrolls, each with unpredictable results until you’ve tried them in game. The rogue-like elements are well integrated into the game and increase its appeal immensely.

Character progression in game largely amounts to equipment and item finding and crafting, as well as unlocking favour points with the keeper of the Necropolis. These can be spent at the start of each level after the first on a special item chest, or from the start on ‘codexes’: books that give your character (and all future characters who equip them) special perks. I was quite excited by these until I tried to equip two at once on a new character, and found that the game would only let me have one active at a time.

The game’s lore also seems fairly interesting, and generally I like that sort of information being introduced while playing, but Necropolis gets it a bit wrong. It’s fine to have the lore, too, but the actual game effects of items and ‘codexes’ need to be given, too, even if only in tooltips or something, and the coloured robes … I still don’t know whether all they do is change your outfit colour.

Necropolis also supports multiplayer, but I couldn’t work out the very minimalist user interface used. From what I can see from the Steam Discussions and Guides for the game, you can only play with Steam friends and there’s no server browser or anything like that, which seems like yet another huge oversight. In any case, watching a few videos of multiplayer shows me that gameplay isn’t any different to singleplayer, but I imagine if you have friends to play with, it could be a fair bit of fun in spite of everything else I’ve mentioned.

Finally, indications in the Steam Discussions are that the developers have no further updates planned for Necropolis. In other words, what you see is what you get. This is really a shame. With more content and love this could have been a much better game. 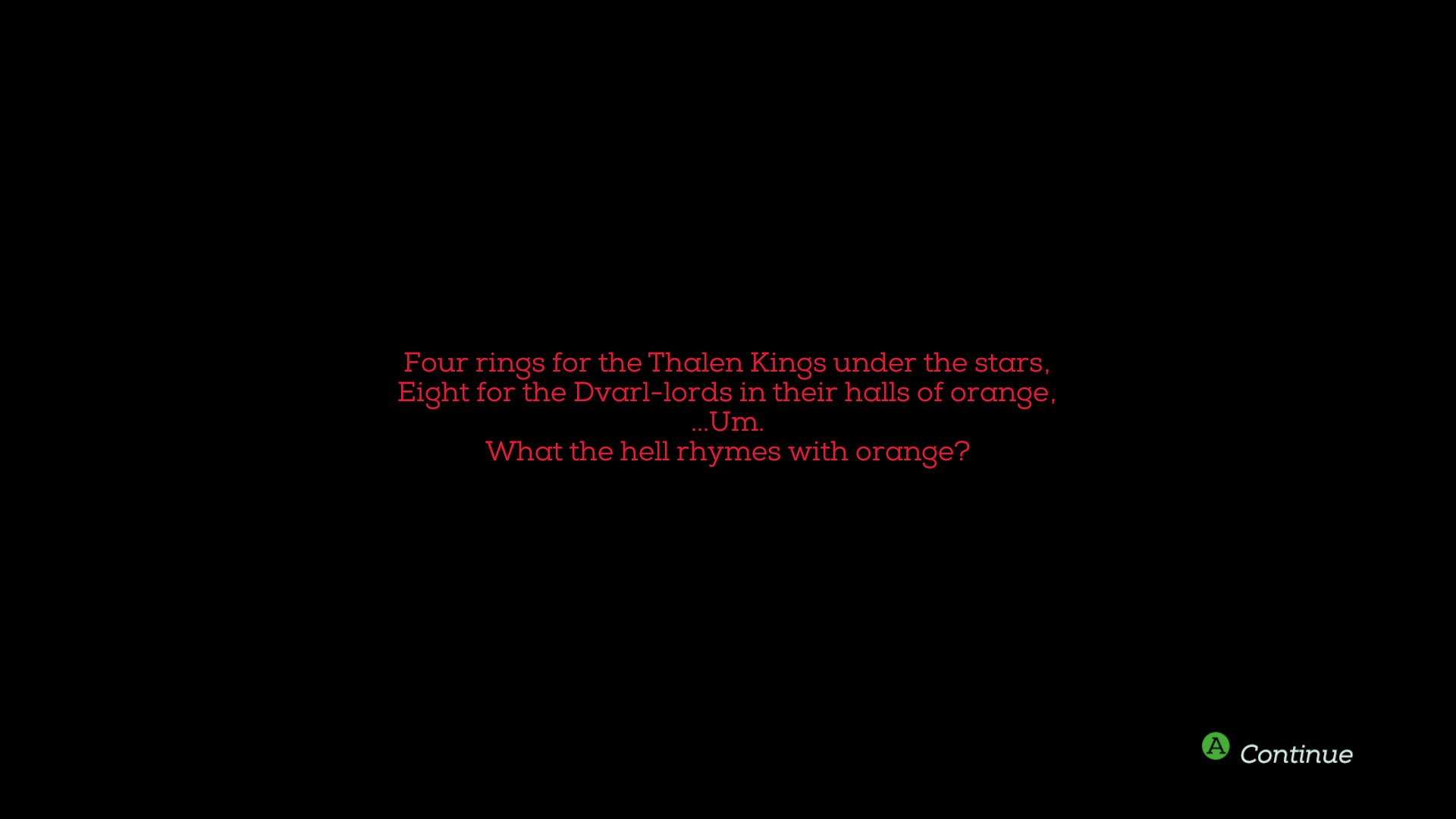 Pros:
+ Unique and attractive graphical style
+ Great integration of classic rogue-like elements
+ Controller combat can actually be quite fun, in spite of its simplicity
+ Good sense of humour
+ Steam Achievements and Trading Cards

Cons:
– Only two character classes
– Combat is rather simple, with only occasional potions and scrolls to break up the monotony
– No map
– Bad keyboard controls with no reconfiguration available
– No pause (even in singleplayer)
– Buggy
– Can only play multiplayer with Steam friends

I’m a huge fan of Harebrained Schemes and love their other titles. Given my expectations, I’m rather disappointed in Necropolis. It’s not a bad game, exactly; it’s just very far from the game it could have been.