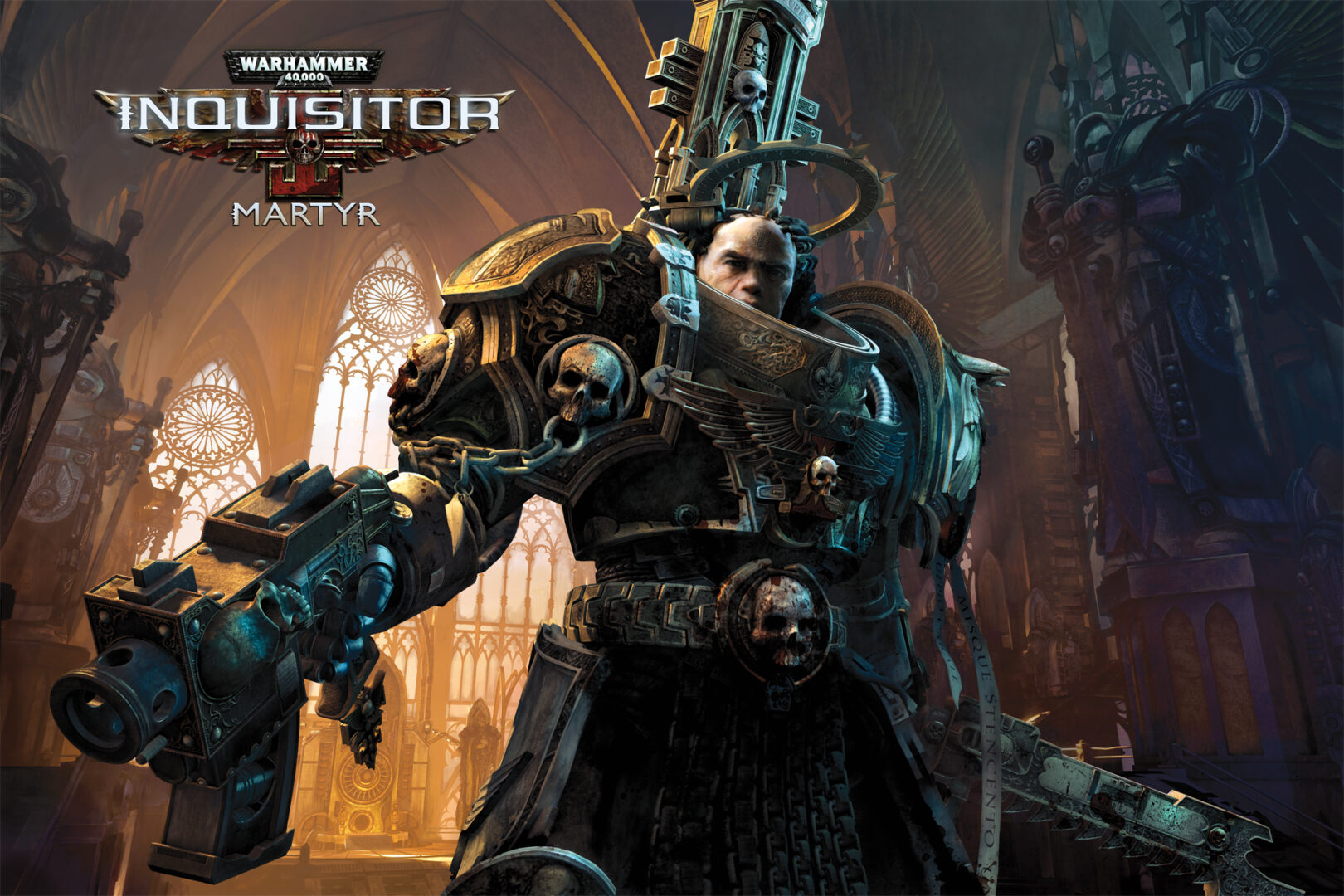 Neocore games has done a few ARPGs over the last few years, so I ventured into this one with a firm trust that they have the basics in order and Warhammer does give a great world and lore to slaughter hordes of enemies. These two things seemed to be a perfect match, at least on paper! Just let me put on my ass-kicking boots, see what/who/where needs to be purged (for the emperor of course, not for the joy of mayhem), and tell you all about it.

Alpha allowed me to play as the Crusader, one of the three classes in the game, equivalent to the tank-type character, able to endure a massive amount of damage and having basic traits to favor the tank-ish play style. Two other classes were Assassin and Psyker. It would have been interesting to see the traits of the two other classes, but they were unclickable. Detailed version of the roadmap at the official site however describes these two classes, if you are interested. Long story short: it seems they really have distinct playing styles.
After selecting the class, I was presented with another option: My expertise. I could specialize in: Close combat, Assault gunner, or to heavy weapons. After briefly testing them all out, my newest incarnation in the Warhammer universe was an assault gunner: quick to shoot, and decent enough with a power weapon if someone got close enough. It really doesn’t seem to matter which one you choose other than giving you your preferred starting gear. Skill points are used to fine-tune your character in various categories ranging from different categories in combat skills to overall skill categories like debuff, critical and hp. So far the skill system seemed to allow a pretty versatile build. In addition to the normal skill points, we also have attribute points that are received by completing Heroic deeds. Achievement type tasks of dealing/blocking/healing enough damage, and other similar requirements that we are used to in ARPG’s.

Being the alpha build, we’re “limited” to one solar system and it’s 4 subsystems, each with 3-4 planets. and it seems there is still locked destinations in that subsector. Accessible from your command ship’s starmap, which is promised eventually to become a sprawling open-world sandbox featuring some some special locations in addition to the normal ones. Each planet also has a description of itself for us lore enthusiasts, and factions that are present there. I haven’t seen anything really done with the factions yet, so that’s most likely a later feature or just certain enemy models that inhabit the location. At the time of writing locations offer single missions with not really much variety in tasks, just purging, and collecting certain items. Being an ARPG, that’s all we need for an alpha version to see the mechanics in action that i talk about in detail a bit later. To encourage replayability, locations have influence-rating that seems to give you better loot and throw harder enemies at you, but i have yet to make sure of that myself since it needs quite a bit of grinding at one location. The more you complete the missions, the more influence you gain at that location. It seemed to be a bit hard finding info about what some certain stats of the character actually do in the game. tooltips over the values would have helped.

Inventory doesn’t seem to open while in the levels, so that made testing out the different weapon types kind of tedious. There were times when I tested out a weapon that I really didn’t like, but was stuck with it until the end of the level. At least it added to replay-value because of the decent variety in gear: we have laser/plasma weapons, power weapons that include hammers, axes and swords, machine guns, flame throwers, shotguns, miniguns and shields. Your armor also grants you a skill, usually a pretty devastating one like shoulder mounted rockets or a huge sentry gun you can put up. You can also customize your stats with different implants on yourself and sigils on your armor. There is a lot of character customization and crafting will be introduced later also.

But how are the levels and combat then? Let’s open up our star map, choose a destination and find out!

So far I’ve seen only two types of maps, and there probably aren’t more. A swamp like outdoor terrain, and a basic industrial-styled spaceship hallways that are randomly generated, but similar at this point, it’s just passages connecting to rooms full of enemies. That is the basic principle of level design in a game like this, so i doubt that won’t change much in the future. I have also seen some ice planets and planets classified as death world, but so far haven’t seen a single mission on them. Maybe it’s just my luck, or there really isn’t anything to do on them yet. Graphical side was fine, there are details on the levels, and in the character models. Other than some enemies remaining standing up after dying, i didn’t encounter any other bugs/graphical glitches with them or with the background, no falling through floors, no blurry textures.  One detail i like was when firing a flag on the wall, it reacted to gunfire by moving.
Combat itself was fun because of couple interesting mechanics. Most interesting was the cover system: here and there on the hallways you can duck behind a pillar, large pipe or other stuff lying around and shoot your enemies from a safe spot. This was surprisingly fun with a fast rifle, first few times felt like you were the action star. You just shot a few bursts, ducked while their bullets were hitting the cover, rise up or shoot over the cover to give a few more bursts eliminating the targets. Understandably covers were scarcer on the outdoor maps. And yes, they were breakable, some more durable than others, forcing you to look for other spots sooner or later. Just wait when the only cover you can duck behind is a giant mushroom, it’s gone before you can even get into cover. Room full of pillars and enemies creates a nice destruction when the pillars start breaking from all the gunfire.

This system brought more engaging gameplay compared to other ARPG’s where you just kind of swing your weapon and use skills whenever possible. It also supports the ranged play-style perfectly, crusader was able to withstand a massive amounts of damage so I rarely found myself using covers since it slowed down my purging, but with a proper ranged character, i think it plays a big part in survival. With my crusader, I was just mainly standing firing my machine gun and rockets from my shoulder cannons. On the bigger enemies that were rarely encountered I used a fair amount of covers. Their weapons made quick work of my health bar, and the covers. Those encounters were the best part so far: Taking cover, ducking when the massive gunfire-attack comes, and quickly running to next cover before the second bullet hell ensues while trying to damage him at the same time.

Second thing that caught my attention was how i didn’t feel the forced to specialize in ranged or melee, i could effectively be both. I hope they keep that in the final version. It made combat fun, switching between the two gear slots, running into covers and blasting/slashing enemies left and right.  When i started playing Alpha, the combat and whole game felt clunky in general. FPS was pretty bad and combat seemed to have potential, but it felt laborious. Now, about a week later the whole game runs much smoother overall and the potential i saw in combat has realized itself more clearly. Turning the camera with the middle mouse button still feels somehow strange in this game from some reason i can’t really pinpoint, but i can’t come up with a better way to deal with it either, all buttons are already binded so that they’re easy to use. I’ve often found myself shooting into blindspots for a chance to hurt enemies rather than turning the camera.

I’ve also stumbled upon couple huge cannon posts on the outdoor area, and game has instructed me to press “E” to use them and sometimes it worked, sometimes not. They were located near enemy hordes and the carnage was great when i succeeded in using them! Camera shifted from the 3rd person view to 1st person while i was operating the cannon to make it easier. It looks promising, we might have good interaction with different objects on the full version. Weapons also need to be reloaded/let cool down depending on the weapon type. After a couple times of running into enemy mob with an almost empty clip, i learned to reload before hand the hard way. Supression mechanic, presented by the red-yellow-green bar going around my health was a bit odd one. The lower it goes, the more slower and vulnerable you become, it’s almost the equivalent of armor in shooters or some kind of magic shield in rpg’s but not quite, since it also makes you slower. I didn’t quite understand what’s the point of this, it seemed to make things harder in a bad way (and mind you, i’m not professional on warhammer so i don’t know is it present in every other game as well and belongs to the armors).  Some skills grant you bonuses when it’s on the green, but ultimately i didn’t like about it too much myself. If my health was as full as my clip, i still had to wait until the suppression meter is nearly full before attacking a room.

There isn’t much music yet, mainly dramatic sounding score instead of a rocking metal tune while attacking a room full of infidels, and casual-rock style track running in the background when exploring the areas. Weapons sounds seem decent with or without headphones, but not powerful enough to feel the power of them yourself at this time. I’d presume they get tweaked a bit too. No spoken dialogue yet either. Not really much to tell about this side of the game yet.

This game seems to be a really ambitious project. Official roadmap promises us many things like complex missions, base building and looting other player bases in PvP, crafting, weekly challenges, large open world and interesting classes in addition to the main storyline of course. Game currently runs pretty good without bugs, even on alpha. Some people report on items disappearing, i haven’t had that happen to me yet. I do have occasional crashes to desktop after finishing a mission, but that’s the only bug after a pretty dragging start a week ago that has now been fixed. If you are into ARPG’s or Warhammer (or  both), this looks very promising that i would recommend following, at least up to the point when the more advanced features have been added. We know little about the open world aspect yet, it looks to be huge and hopefully full of complex missions. Many solar systems filled with the same kind of missions grow tiresome quickly since it’s grinding even now in the first one to get influence up in all of them.