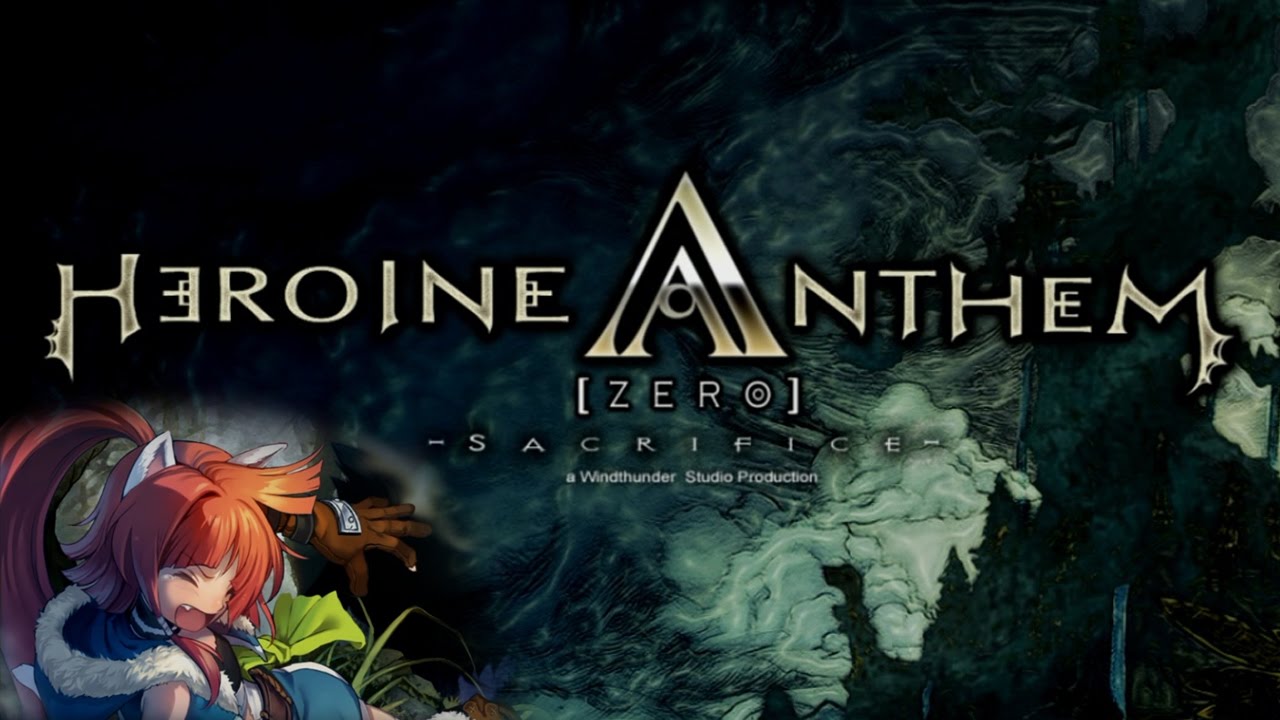 Heroine Anthem Zero focuses on story-telling, which is all fine and good unless you’re in the market for a solid metroidvania. Combat takes a backseat to narration and platforming for a more laid back metroidvanian experience.

You play as Wanin, a Forest Guardian whose task is to protect his hometown. The world plunges into chaos, its monsters going wild and becoming extra aggressive, meaning it’s up to you to save it.  The plot thickens when you realize the problem stems from strife that spans generations and it falls upon your shoulders to save a land cursed by an unforgiving god. 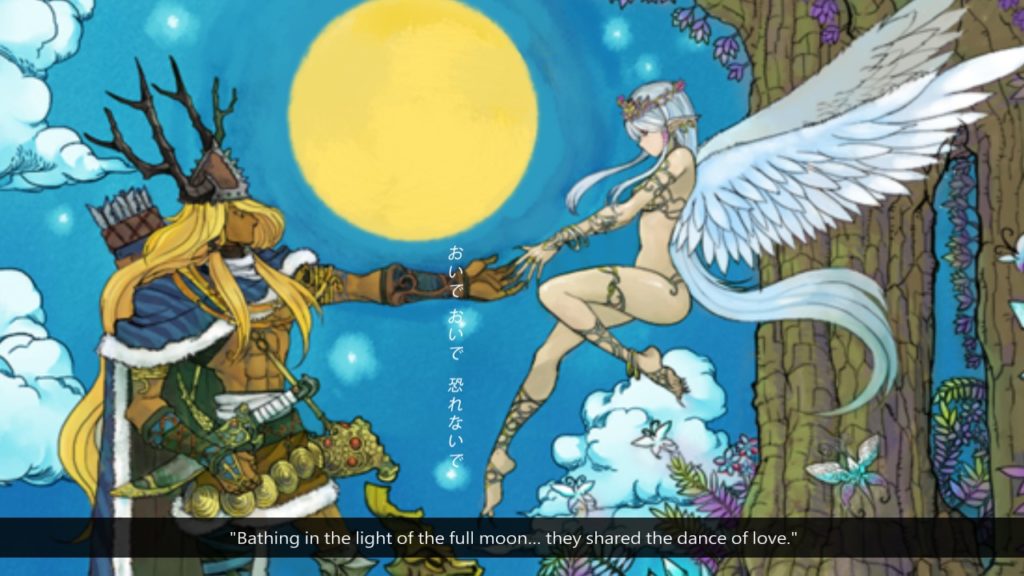 The game can be played with mouse and keyboard or with gamepad. Both work well, but the usage of “up” as a means to interact with objects and people meant that I was accidentally speaking to people or walking into buildings while controlling Wanin. Using “b” to accept was also weird for me as a Western gamer, but I got over that eventually.

The game world is split into a series of interconnected segments typical of the Metroidvania genre. In order to progress, you’ll need to put your platforming and, to a lesser extent, your combat skills to good use. 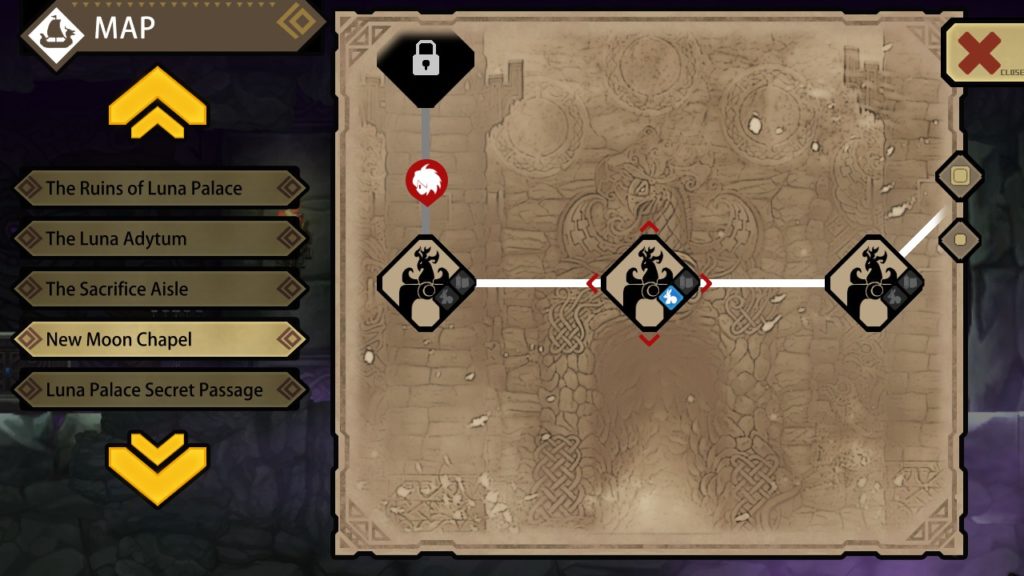 If you have a good eye, you can often spot the areas hidden behind the environment and often times beyond a harmful obstacle like thorns. In these nooks you’ll find chests filled with Cimu, the game’s currency, and health upgrades. Wanin has the ability to double jump and also to dash if you double-tap forward, which can increase the range of a single jump as well as speed up travel. 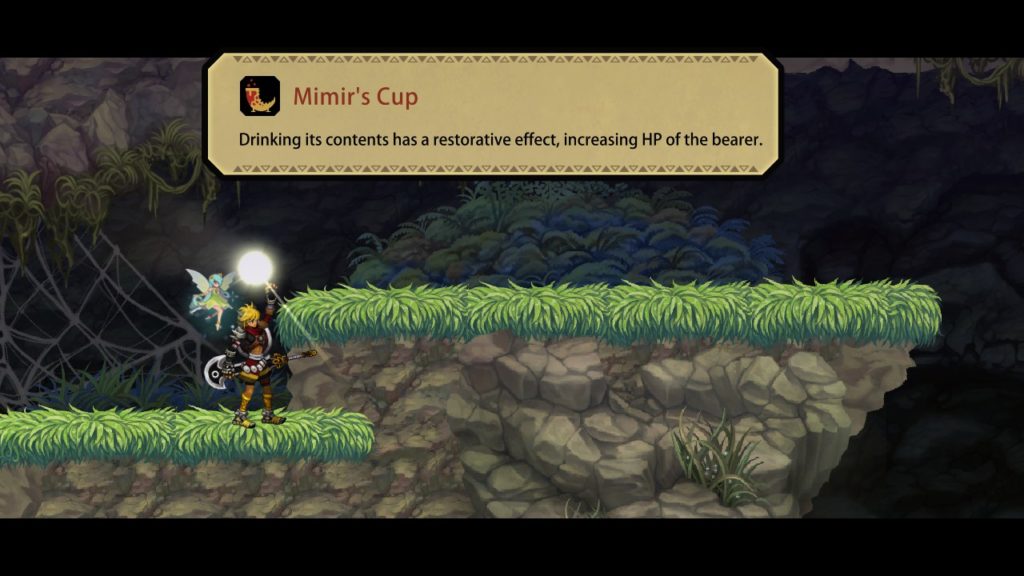 Money is used to buy new equipment for Wanin once you’ve unlocked the shop, and also to rest at inns and camps to replenish your health.

Wanin can equip two types of equipment: armor and weapons. These increase his defense and attack respectively, in addition to enabling a different charge attack. Wanin can only use one type of charge attack at a time, so other than a little dash that Mormolia does, there aren’t a lot of attack options. Armor is added at random, but new weapons are unlocked via blueprints awarded from fighting boss monsters. 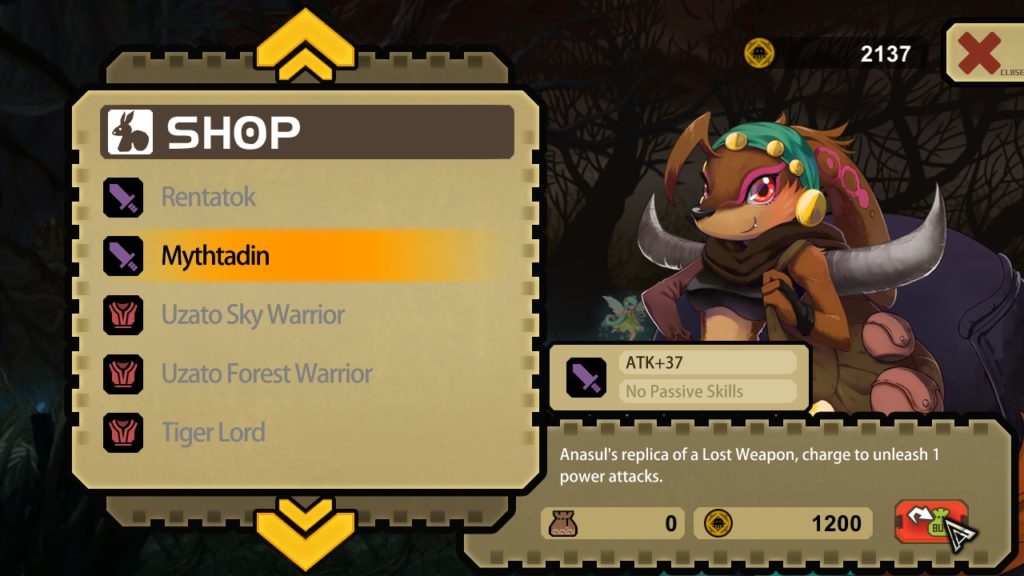 Once you unlock the shop, you will also be able to fast travel to any location the sales girl, Anasul, sets up shop. Fast travel is free, so it’s a great way to get around. 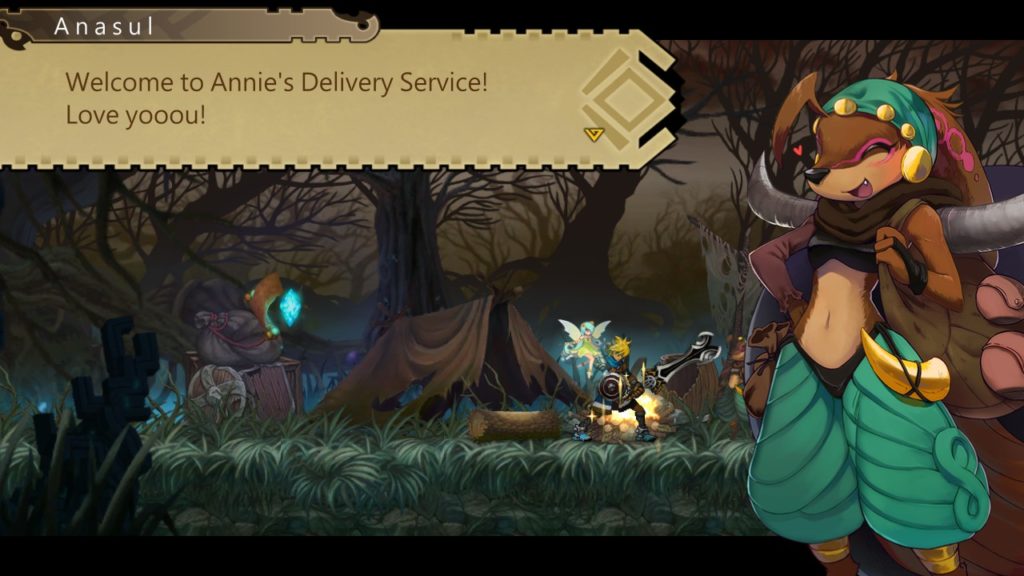 Your standard enemy can be taken out with one or two hits, though some of the hardier ones can only be damaged by your charge attack. Still, enemies in the game don’t pose much of a threat.

Defeating an enemy yields money, attack power ups, food (apples which heal a bit and meat, which heals a lot), and runes in your possession and the the more you have, the more powerful Wanin’s basic attack will be. If you have 3 in your possession, for instance, the third attack in a combo will result in a powerful purple aura that adds a bit of range. Getting stuck by an enemy can result in losing a rune, so stay on your toes. 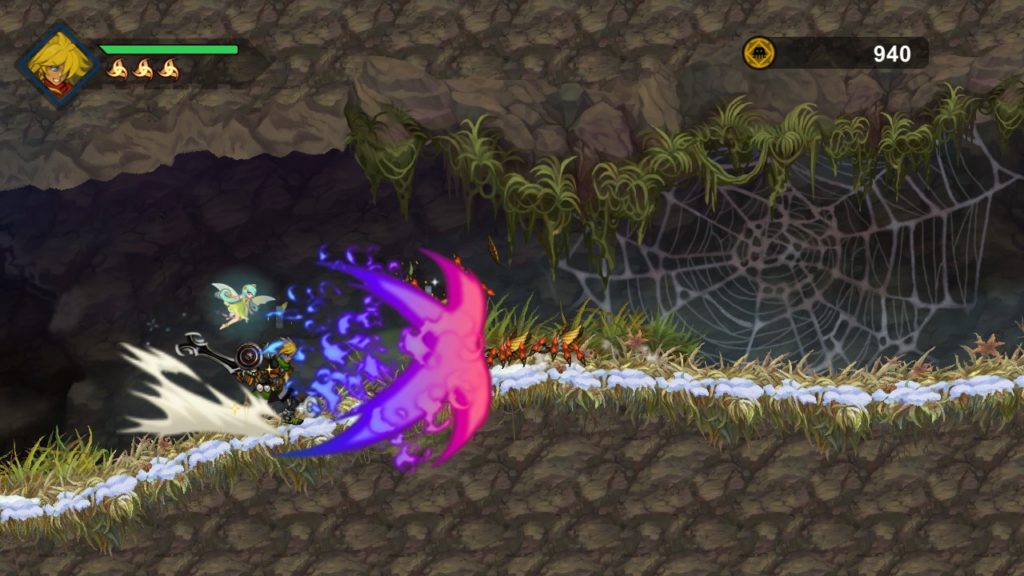 **Items, for whatever reason, are not automatically drawn to Wanin, which was a hindrance as I had to chase down Cimu and apples when my health was low. Sometimes the latter rolled into a patch of thorns and was lost forever.

Boss enemies pose more of a threat, but still, lack the oomph bosses in other games of the same genre possess.

They won’t leave you at the edge of your seat or make you want to punch your screen after being outwitted for the umpteenth time, nor will there be a tired sense of exhilaration after you’ve felled a worthy foe. Bosses, though large and intimidating, have an attack pattern and don’t change things up too much once they’re low on health because, by that time, you’ve beaten them.

Still, they, like everything else in this game, are visually pleasing and interesting. 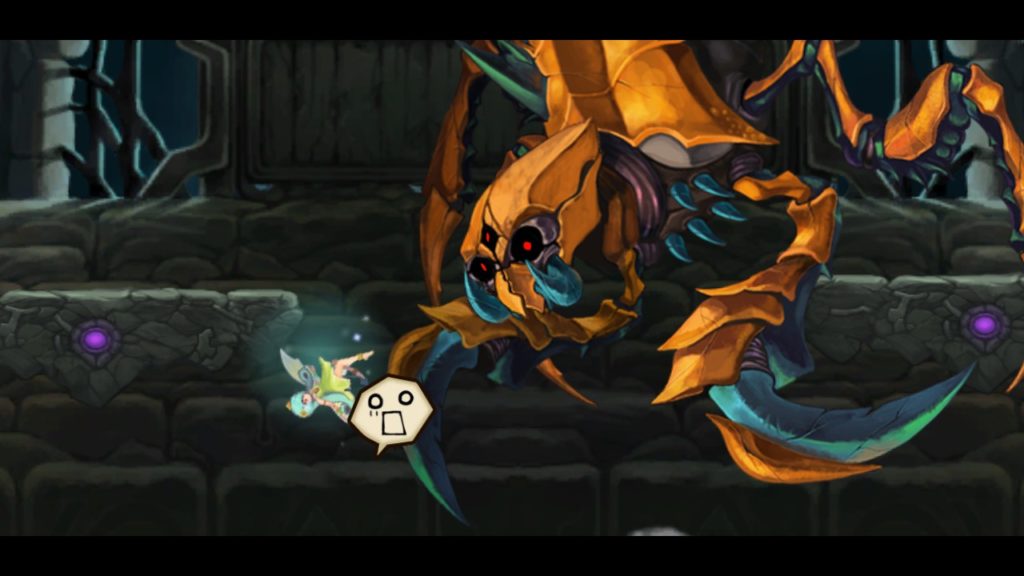 Aesthetics are where the game really shines. Done in anime style, the characters are all perfect specimens of humanity: buff, slender, and beautiful. There’s plenty of fan service to be enjoyed if you’re into that sort of thing.

Cutscenes depicting larger murals that are panned across tell the majority of the story and are fully voice acted in your choice of Chinese or Japanese w/ English subtitles. The music is nice too, and there are even a few song that are sung during cutscenes.
That being said, cutscenes are often times longer than need be. There’s no way to skip them or speed them up and some last upwards of four minutes. Rather than engage me in the story, this served to decrease my interest.

You won’t miss out by waiting for a sale.

A solid story-telling game with some combat and exploration elements. This is a tentative thumbs-up for me because I did enjoy the exchanges between characters and exploration even if the combat was on the basic side. 14.99 may be a little steep for a glorified VN, however.

Stay in the know, gamers~