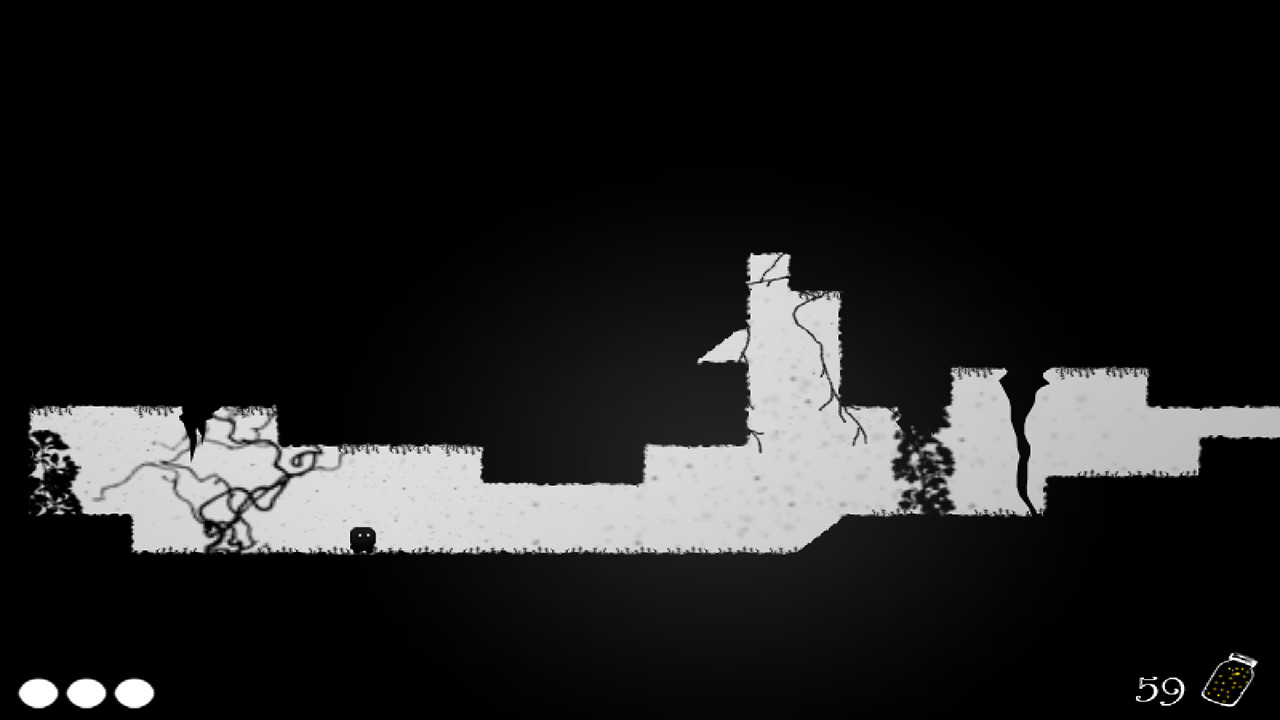 Finding yourself in a strange dark cave, you have no memory of how you got there. Armed with only a jar, the fireflies you collect will light your way as you explore. But how can you get out? A huge hole in the ceiling of the cave seems to be the only way to get back to the surface but it’s too high and wide for you to climb up. Be ready to construct a beacon to contact the surface with the pieces gathered from various spots in the cave. Be careful, as many spikes threaten your life and every wasted second can mean death as fireflies escape. Will you find out how you arrived in the cave? Will you be able to escape the cave before the darkness swallows you?

Shadows’ main gameplay is the platforming, making the layout important to enjoy the game. The layout is very interesting. In some parts you have to jump from the previous floor, and some you see before you reach the area. If there is an area that is well hidden, part of the particular passage will be shown. Many areas also have multiple ways to get past, letting you decide which way you can successfully go.  Regular, double and wall jumps help to easily reach each ledge and jump over gaps and spikes. For the most part it is very easy to get the hang of and easily jump over the areas that are certain doom. There is one part that is harder than the rest but it requires you to learn a trick with the jumping.

There is an interesting play with light and dark throughout the game. You somewhat have a time limit as fireflies escape over time, making the cave ever darker. The more time you spend in one area, the more fireflies escape. But it doesn’t end there. Some exits are sealed if there is too much light, only opening up if you release enough fireflies. A prompt will show up telling you, but there will be a gray wall up to a point. Transportation to get to or out of an area is also not revealed if you are in the dark, requiring you to collect more fireflies if needed. 50 fireflies are needed in the end, so this either has the player farm for fireflies or remember where they went to avoid losing fireflies to get to an area more than once.

When you lose all of your three lives you can receive a screen based on what you have gathered. By default you will respawn at the start with all the beacon parts and fireflies you had at the time. If you have one or more beacon parts, you can respawn where it was gathered for one price. The part will be lost if you have to respawn again. If 25 fireflies were in the jar at the time you died, you can release them and respawn in the room where you died. However, make sure you know how many you had as it will spawn you with 0 fireflies. Do you play it safe and travel back? Or do you risk it and respawn with fireflies or a beacon part?

A nice, calming soundtrack acts as a nice ambiance for the cave along with loud footsteps to give a sense of texture. This can easily be put in the back of your mind, trying to bring a calm vibe if you come to a difficult area or are desperately looking for the last beacon part.

Shadows has a simplistic style, only using white, black and shades of gray within a determined section of the screen. To give some variety, the background or foreground can show some plants swaying, vines and stalactites. Fireflies stray away from this, having a distinct yellow glow that points out their location on the floor. The memories are the opposite, looking like darkened fireflies swirling around in a circle.

Shadows ran very well throughout the whole experience. The simplistic style it has may allow any computer, new or old, to run it. The only thing that can be improved is the settings menu. There is an option to disable particles, fog and lights but it is unchecked by default. As it doesn’t have a title mentioning this, it may make more sense for it to be checked by default.

Right now there are a few ways that Shadows has increased its replayability. Multiple endings have been implemented this year, determined by which order you gather the memories and how many you collect. There is also an achievement to complete the game without dying, though don’t go crazy trying to.

+ Use of light and dark
+ Good layout design
+ Simplistic and calming

+/- Somewhat confusing using the menu with the controller
+/- A bug has a chance to show up that disables the player’s movement but it is fixed by exiting to the menu and going back in.

Shadows is a simplistic platformer that is playable from beginning to end, having a calming atmosphere with a unique use of light and dark intertwined with the gameplay. Outside of a little adjustment to the settings menu, it would be useful if there was a way to distinguish a used save slot. The developer, Logan Apple, does wish the community to be involved with the development and has already implemented features that were requested and fixed bugs that were found. It will be interesting to see how Shadows evolves over time, as it is enjoyable, and see what creations the level editor can make. If you are a fan of platformers or want a generally easy, chill game Shadows is for you.