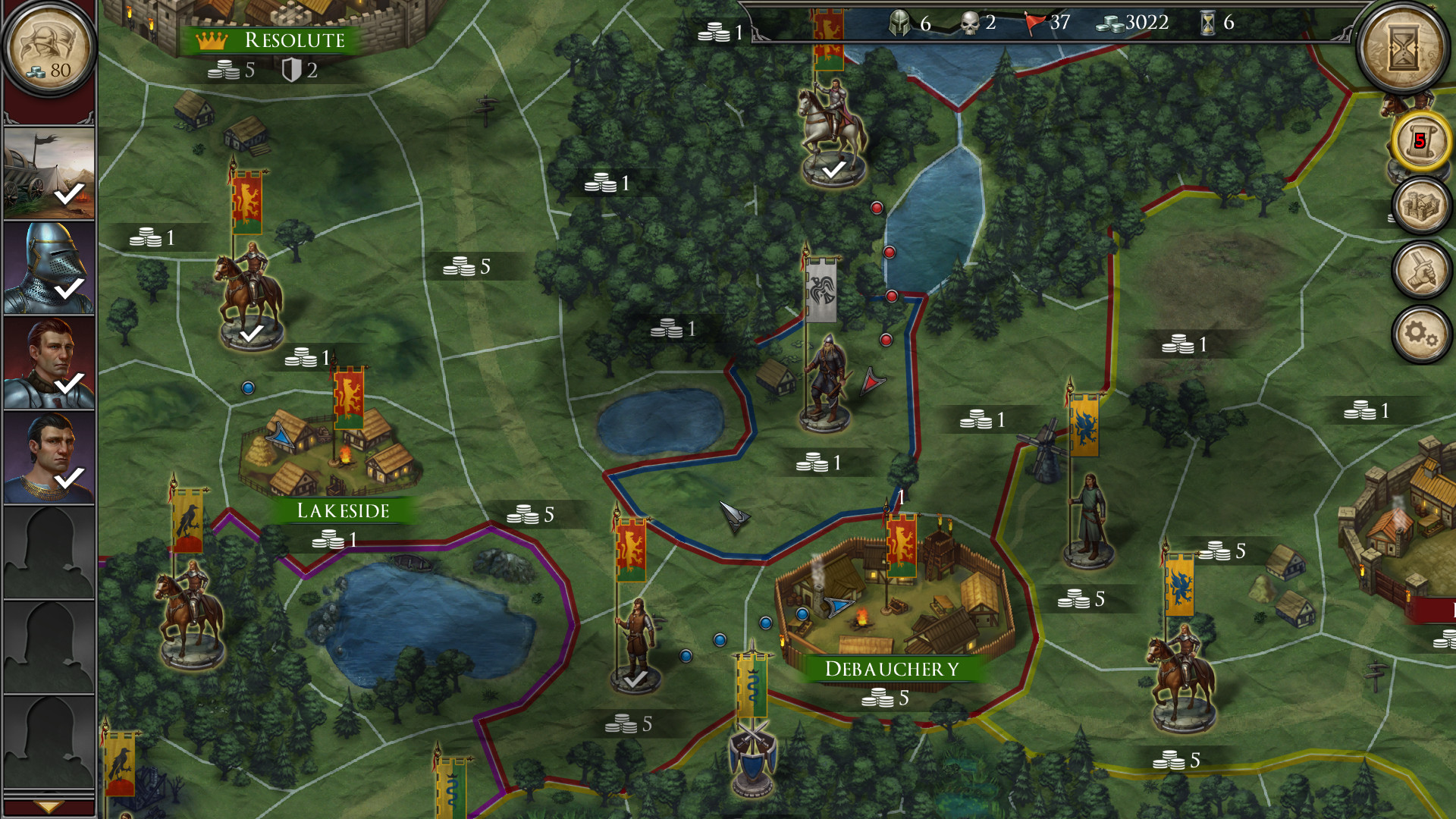 Strategy & Tactics: Dark Ages is a turn-based strategy title by the developers over at HeroCraft. They are no strangers to the strategy genre, making several medieval and modern themed games over the past year. It has been over a month since the game was released into Early Access and it has already seen some patchwork to fix some of the crippling launch issues. While the tactics are indeed present in the game, some key mechanics and technical issues make the experience feel more like a battle of attrition than coherent operation. 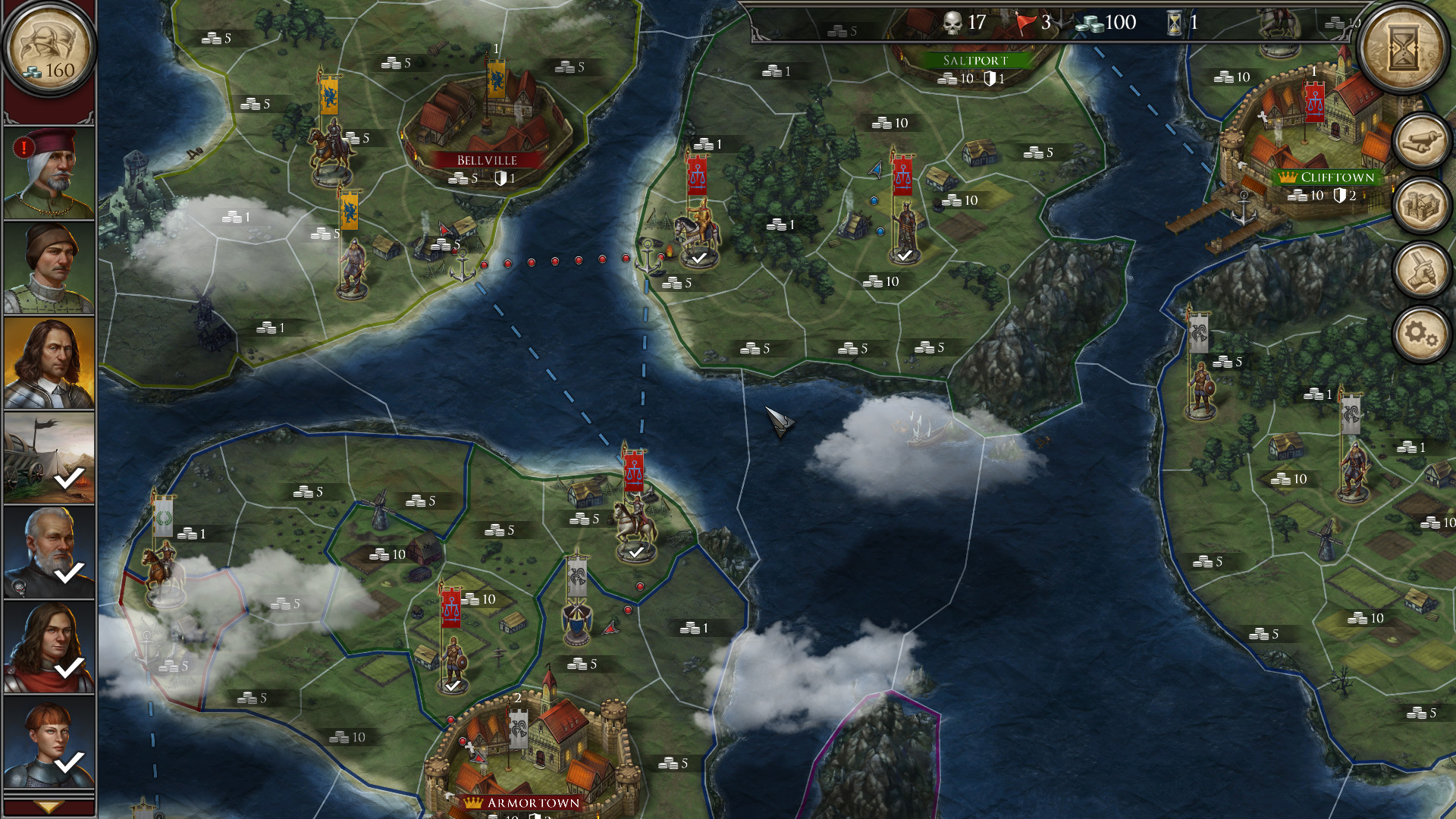 The presentation value is currently the game’s strength, from the dynamic maps to the small details that are scattered across each map. Smoke can be seen rising from certain buildings, birds flock over towns and clouds shade the countryside as they move across the board in a natural manner. The figurines used to represent armies also look great, but the real artistic prowess is shown in full force with the unit cards and commander portraits. The battle animations used for the combat recaps are also quite nice to look at, but the desire to watch these fights play out is diminished greatly by the outcome already being known before watching them. It all meshes well with the game’s soundtrack, which fits the setting beautifully. The tracks vary from calming harp and flute melodies to the frantic beating of drums and the heroic blows of trumpets. It all melds together into a very pleasing aesthetic that carries the game’s limited combat.

Dark Ages focuses on recruiting commanders and troops, taking territory and building an unstoppable force to conquer unforeseen foes. It also boasts over 50 different unit types with their own interesting lore, plenty of historic commanders rewritten for this alternative medieval setting and a mercenary system that can help turn the tide when a surprise scenario appears during a mission. At present, Dark Ages has a total of six missions to undertake with the first one acting as a tutorial. Each mission has a couple of primary objectives required to complete the scenario, but there are also a slew of secondary objectives that can be attempted even if the primary objectives are met.

The purpose of these objectives is to acquire glory, which is spent on upgrading the attack and defense values of unit types in the Forge or for hiring legendary commanders that can be re-used in later missions. Unfortunately, the cost of doing both is subjectively high and the difficulty spikes for certain parts of the missions make it critical to replay the same mission ad nauseam for the glory needed to progress. This can be fixed later down the line as more missions are added to the game.

Combat is essentially a numbers game that incorporates statistical changes from terrain type, weather conditions, commander traits on both forces, individual troop bonuses and the effectiveness levels of the formations used. Once all of these modifiers are applied, both sides attack simultaneously using attack strength and defensive standings to determine the damage inflicted to the health of each unit. Morale also plays an important role by allowing an army to reduce their enemy squad’s morale low enough to cause them to desert, which can compensate for some rather insane modifier totals that have left me facing an army too weak to kill me, but too defensive to take damage. Everything is calculated in a hands-free fashion, making the selection of a commander’s formation and placement on the map the only player interaction in regards to combat. There are also special abilities that can be activated to help sway the calculations, but they require foresight to a possible engagement to be of any use.

Aside from the upgrade concerns, the game has a few technical problems that range from the annoying to the absolutely frustrating. The camera has a bad habit of stopping periodically while scrolling across the map using the WASD and arrow keys. The mouse also feels incredibly sluggish while moving the cursor, which could be offset by a mouse sensitivity slider. Upon launching the game, there is a chance (averaging 50/50) the game will fail to start up and merely sit there with a partial black screen. Crashing also rears its ugly head at some of the strangest moments, which is thankfully countered by the game’s auto-save function that will save progress following a completed turn. The last major issue is more of an exploit, but I have discovered if a match should end in defeat, a player can return to the last turn and complete the match (if all primary objectives are met) and receive the same amount of glory points as the earlier defeat. This essentially makes it possible to earn twice the glory for one match.

Strategy & Tactics: Dark Ages has established a great foundation for the game’s core mechanics and has out done itself visually. It is a beautiful looking game with some interesting ideas held back by a lack of mission availability and a difficulty spike that demands a heavy glory grind. If the idea of grinding the same scripted missions for glory doesn’t worry, then the current build could be enough to provide some solid hours of strategic entertainment. With the technical issues and hands-free combat, however, it would probably be best to wait and see how the game evolves before throwing down the $10 entry fee.