How can you describe a game truthfully, bringing in what the game means in a sentence? Experience is described as wandering aimlessly through locations, destroying everything that may be a threat as you play the character. It couldn’t be more truthful. 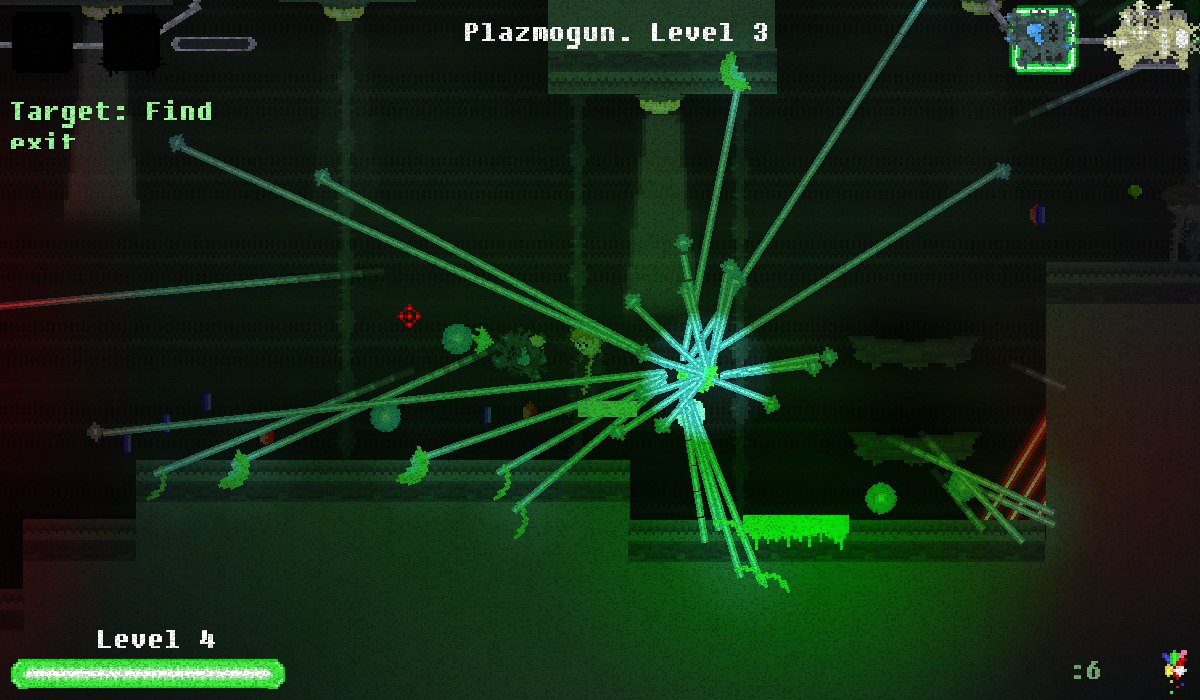 Despite what the store page may say, Experience does not include a story. There’s not exactly anything that shows the character is a scientific experiment, unless being able to spin your arm 360 degrees counts. You do go around killing threats, but not so much aimlessly after a while as you have to know the area to proceed. It would have been appreciated if the player could see the character escaping from a lab-like area, instead of only explaining it on the store page.

There are twenty available levels in Experience, the area changing every five levels and recycled objectives. The first level is the only different one as it does not have any objective, but is somewhat a tutorial. However, it is confusing. There are numbers on screens throughout the whole level, with seemingly no meaning behind them. It also doesn’t put you on a direct path, so you can accidently fall off. The first level does teach you how to move and jump, but not everything as you find out later. The other levels include either defeating a certain amount of enemies, running away from a wall of enemies, finding the exit in the dark, and finally defeating the boss. Rinse and repeat, changing some positions here and there, and you have Experience. It would be helpful if there were health pickups you can collect throughout the whole level rather than having to have an ability. There are some instances where you can’t help from being damaged due to dangerous objects being placed too low compared to your jump height, or enemies being placed in the way. Maybe if this didn’t seem such as a routine, this would be seen in a different light. As other games similar to this has different level layouts and areas, with an assumed objective. The wall of enemies levels are specifically familiar, but it comes far and few between in other games. Being able to compare what Experience does to other games, it is easy to tell Experience did not use this as well as others. Experience somewhat has a puzzle aspect as well, but it does not come off as that most of the time. It just dead ends, forced dark areas, or areas you can’t get out of. It seems like bad level design, as you can’t get some enemies or objects if you past the area containing them. Though it does make sense in the wall of enemies levels, as you are supposed to think fast, but not in a way Experience does. These dead ends makes it the game’s fault, instead of the player, that they died. As in situations where you only have to kill enemies or find objects, it doesn’t matter that you have to remember the level through deaths.

In each level, you can collect these gems, named Cristales, that comes from destroying a certain object littering each level and enemies. From this you can go to the shop to buy guns, gun upgrades, and passive and activated abilities. Though confusion also plagues this area. You can’t buy a different gun unless you click a gun slot so a green line follows your cursor. The gun upgrades also have an unknown effect, as it doesn’t seem it upgrades anything other than the look of the gun. Each gun does seem to have their own type of bullets, with it’s own shot speed. The passive and activated abilities do not show up until you buy them, as they are hidden in the shop. I only happened to click on one of the empty boxes, buying it and showing the ability. It seems it was supposed to tell you, as it has “bought” under the description, but as it is, it is not an effective way. You have to either buy all of the abilities or pick one at random for an ability that is useful to you. However, with the default language being Russian, it is almost impossible to know what the objective is. Even when changing the settings, it reverts back to the default after exiting. There is a work around by going into the game’s save document, but no one will know to do that unless they happen to find it in the game’s discussion boards. For the most part, you can guess what the objective is, such as a counter going down or the wall of enemies being able to kill you on the spot, but not on others.

There are a few bugs throughout Experience. Level five is accessible before completing level four, so you can not progress even if you beat level five during this time. You can also fall down to what would be your death, but soon turns out to not be. You are stuck walking around the bottom of the level till you exit out of it as your health wasn’t fully depleted as it should of been.

I do see how Experience could have been a good game, but it feels it doesn’t use this type of game design to its advantage.

Each set of levels has their own background sound, almost sounding like a remix of a one song. The boss music seems to be the same for each, but it is interesting how the rhythm of their bullets sounds differ. Almost giving each different boss characteristics. Guns also have different sound effects, but it is put back enough that it isn’t annoying. Experience has a pixelated art style, though nothing much catches the eye except the bullets and bosses. The regular enemies and objects usually do not, as most use the same basic design throughout each set of levels. The bosses, which happen to be my favorite visuals, have a unique design from others and easily dominates the screen. The bullets are bright enough to notice, but not too much that it blinds.

Most of the environments are fine, having a good mix of light and dark, but one happens to be too bright. It seems to be a snow level, but everything is white and blends together. Each enemy and platform seemed to be autofilled white, instead of creating a snow-like surface.

With the pixelated art style, Experience ran pretty smoothly. There were little peaks here and there when too many bullets were on screen due to being able to ricochet or stay on the enemy.

– Changing settings does not take effect
– Can not understand the game unless you happen to find the discussion thread showing you how to change the language
– Some instances you have to get hurt due to the jump height
– Puzzle aspect is frustrating, as it doesn’t fit most of the time and makes it the game’s fault you died

Experience is surely an experience when you play it, as it shows what could go wrong in designing a multi-level game. Is Experience worth buying? No, it is a very frustrating game that many probably didn’t get past the first few levels. I do not recommend Experience. However, it is a good learning experience if you happen to aspire being a game developer.