The remake of Please, Don’t Touch Anything has finally arrived! But is it worth picking up or should you avoid this altogether?

Sitting in front of a desk and staring at a screen, you hear a door open. Your friend asks you to watch the room for him, making sure nothing happens while he’s away for a short time. Turning back, you notice a button on the desk…but what does it do? Does it have something to do with the city being displayed on the screen? Do you even want to find out? That button does look tempting. One press won’t hurt, right? Despite the title being Please, Don’t Touch Anything 3D, you do the opposite for most of the game. While you can obey your friend and sit there till he comes back, it actively tempts you with the button. What’s the fun in just sitting there if you can see what the button does?

The ultimate goal is to unlock all 30 endings, each characterized by a light beneath the table and a poster. One to tell you which numbered ending it was, the other to decorate your wall with posters. The red button, which is quickly revealed to be the main one, is the starting point. Other buttons, switches and compartments are uncovered as progress is made. While there are endings that can easily be achieved, you will not go far without puzzling over various texts and objects around you. In fact, one of the first puzzles has you find a code that unlocks other interactions and puzzles. Once this first puzzle is solved, it quickly picks up as you learn where everything goes. While it does keep to its roots, it has a whole room to work with. But where are the solutions to the puzzles? What’s stopping someone from constantly guessing them? While there is no stopping someone from doing so, it becomes unlikely as each ending needs specific conditions. Some are number puzzles, and going through all the possibilities may take longer than figuring out the solutions, which are all around. All you have to do is determine where they could be and where to put them or how to decipher them. Some are in plain sight but others will become visible with interactions or looking from a different perspective. Along with this, you must remember what you see, as they are often located on different paths. Each solution also opens up multiple endings that result from different interactions.

As pressing buttons is the main interaction, it is important to get the hitboxes right. For the most part they are, but sometimes it may register a different button than the one you meant to press. This doesn’t happen much, but when you are going for achievements it can become annoying. If you do have trouble hitting the buttons, you can zoom in. Throughout the game radio music is constantly played in the background. As you get used to it, it fades out of consciousness until it changes. The volume of sound effects, for the most part, is perfectly balanced. You can hear them and the background music without any problems. The distance between you and the sound affects it, and the occasional removal of sound also adds to the atmosphere and experience.

The voice acting of the friend may be one of the things that needs to have a higher volume. It seemed like it had a lower volume than the music and was almost drowned out by it.

The only sound effect that is not great is the phone’s. Pressing the numbers can result in a high pitched beep, and hearing this over and over can be grating. The static when first picking up the phone can also be difficult to listen to. While the dial tone and messages are not as bad, it does not help that they followed other displeasing sounds.

Please, Don’t Touch Anything 3D does recommend wearing headphones during gameplay, but I would not. You can still hear everything without it, and it would be best not to have the high pitched phone closer. 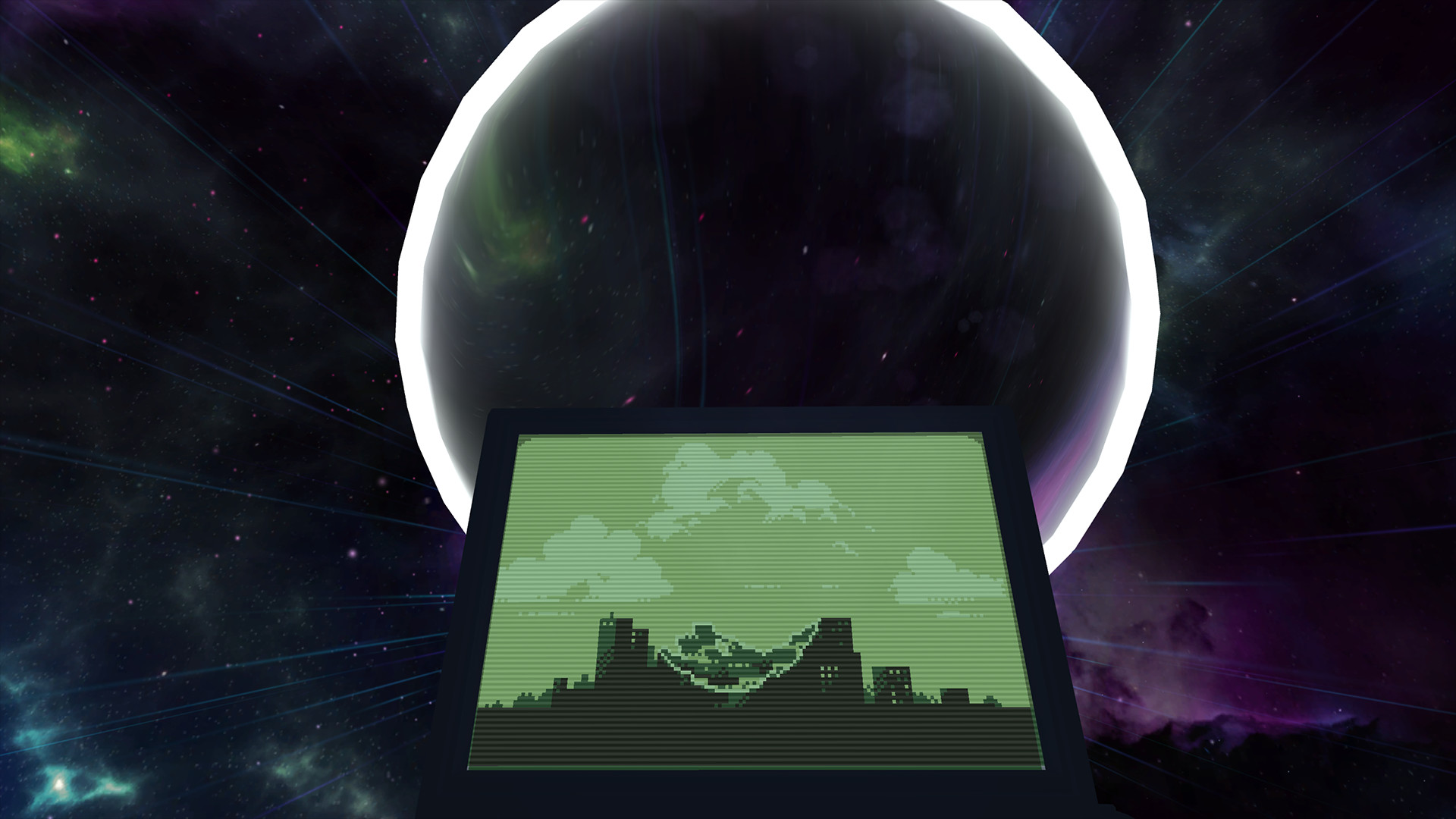 Two different art styles are most prominent in Please, Don’t Touch Anything 3D. Most scenes and interactions involve the realistic room and the friend’s arm. Despite this it is a simple room design, decorated to show it is an office but not too much to make it cluttered or showy. The other aspect is the pixelated art style that is displayed on the screen, which was the main art style in the original. This was a great choice, as it does let the player easily understand the town’s state. If it did use a realistic style, it may have been more difficult to view and may not have let the room nor the screen stand out.There are some other styles sprinkled in, such as the posters having a paint feel and some endings using an exterior area to show the room is not there any more. Please, Don’t Touch Anything 3D does generally run well. There are a few peaks when it does lag behind while it loads dust or the ending you triggered. These are few and far between and do not really affect the enjoyment, only confusion about why you are suddenly staring at the ceiling at some points.

The replayability lies within the achievements and the player. Did you get all the endings? Why not try to get all of them with no mistakes? This does make the player find out the most effective way to achieve all endings. However, this can be tedious as the hitbox can press a different button, causing you to restart from the beginning. Unknown exceptions may or may not also add to the button count.

Please, Don’t Touch Anything 3D is a remake of the original that was released around a year ago. While it does contain the same puzzles, it does not have the same solutions. You would not be able to use the same numbers from the original on this version. New puzzles have also been added, along with a way to encounter the Red Baron minigame.

The new space provided with the 3D remake is not wasted. While it does have solutions and secrets all around, the room is also affected by the results of the endings. While there are some missed opportunities with some, it gives a different feel from the original.

The interactions between the friend and you may be weird, more so to those who played the original. You do not hear the reply the player gives to the friend in this version, whereas the original did. However, you do get a view of their arm. This may have been a way for the player to envision their own friend while also saving their own time by rendering a whole body. +/- The silhouette left behind when picking up objects can be puzzling 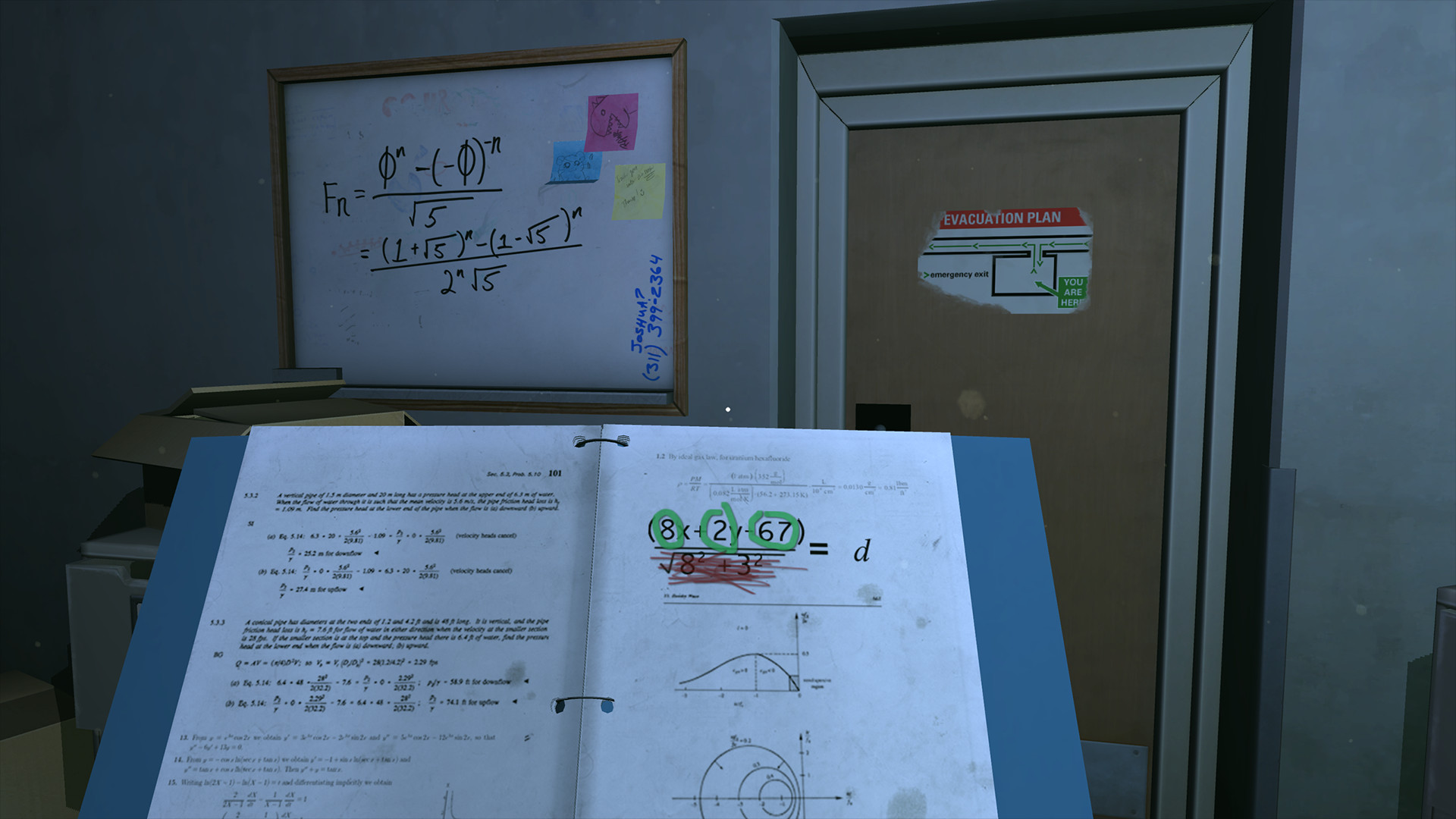 While Please, Don’t Touch Anything 3D is a remake, it is a wholly different game. The space is used effectively and does not seem to be wasted in any way. The way it is designed seems to have had VR in mind. There is currently an Oculus version on the publisher’s site, but they are building support for other VR platforms for Steam. I do recommend Please, Don’t Touch Anything 3D, especially for those who love puzzlers.