Can a game priced at one dollar be fun? Obviously yes, if you’re a Steam user, but I don’t mean on sale for one dollar, I mean that as the default price. You’d probably assume no, but price obviously isn’t an accurate indicator of quality sometimes. If your price point is that low, Lost Socks might bring you some fun, although there are some issues depending on what kind you are. 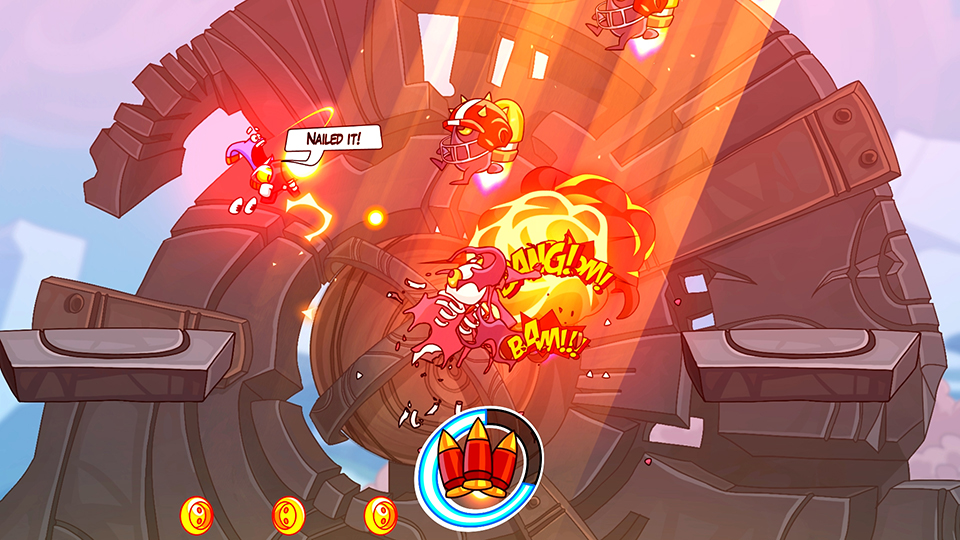 As the title implies, you play as a sock whose twin has suddenly disappeared off the line. You need to travel through an unnamed world of bizarre fantasy to find him. That’s about it. The gameplay is that of an auto-runner, which might make some of you tune out right away – I can’t exactly blame you given some entries of that genre. Sock (the game doesn’t really offer a name for him) moves to the right automatically, and you need to react to obstacles and enemies. The store page calls it a platformer with runner elements, but when it’s the basis of the gameplay I dunno if I’d call it ‘elements’.

Sock can jump and glide, as well as dash over spikes. The dash can also defeat enemies, but mostly how you get rid of them is by shooting them with either the light or heavy guns he carries with him. Yeah, you pack heat in this game, it’s kind of weird.

The levels are pretty standard ‘get to the end’ affairs, but across all of them are three cages, which you can break open to release other socks. That might sound familiar to you, actually: a hero with hands and feet but no limbs, running on his own and breaking cages to release trapped allies. Yeah, Sock to me seems like a really poor man’s Rayman.

It’s decently fun despite that, though. The animations and levels are all bright and colorful, and beating enemies, smashing cages and collecting coins and power-ups are all pretty gratifying. It’s a mobile port, and I can see someone playing a level or two on the bus and enjoying it like that. I don’t know if it really stacks up compared to other platformers on Steam, though.

If you want to go a step beyond casual, of course, there’s also a scoring system for each level in addition to the cages. Matching these requires doing what the game calls ‘combos’ – actions like beating multiple enemies in one dash, or killing them with the gun while in the air. It more or less wants you to do one whenever possible, and while that sounded interesting at first, it quickly began to rub me the wrong way. There are enough that I found it hard to remember them all, and it felt like I was just flailing around at times trying to do them. Unless you can remember them all perfectly, scoring high is sort of trial and error even early on, since there are often situations that require one in particular.

That’s a pet peeve of mine, though – I do always like to try getting the highest score if there is something like that, but this system seems a bit half-baked. Plus, this game has no achievements, so trying to get three stars on all the levels is even more for bragging rights than usual. Overall, while not a bad game exactly, I’d say there are a lot of platformers on Steam that trump Lost Socks, and while it is only a dollar it might not keep your attention for very long.