Dragon Bros is a traditional 2D side scrolling platform shooter for single player or local co-op.

You play as a cute dragon against robot enemies which come at you from the sides and above and burst into fiery explosions when defeated. It’s family-friendly (no blood or gore) and has a retro feel with button hints being displayed on old Gameboys, a fun little detail. 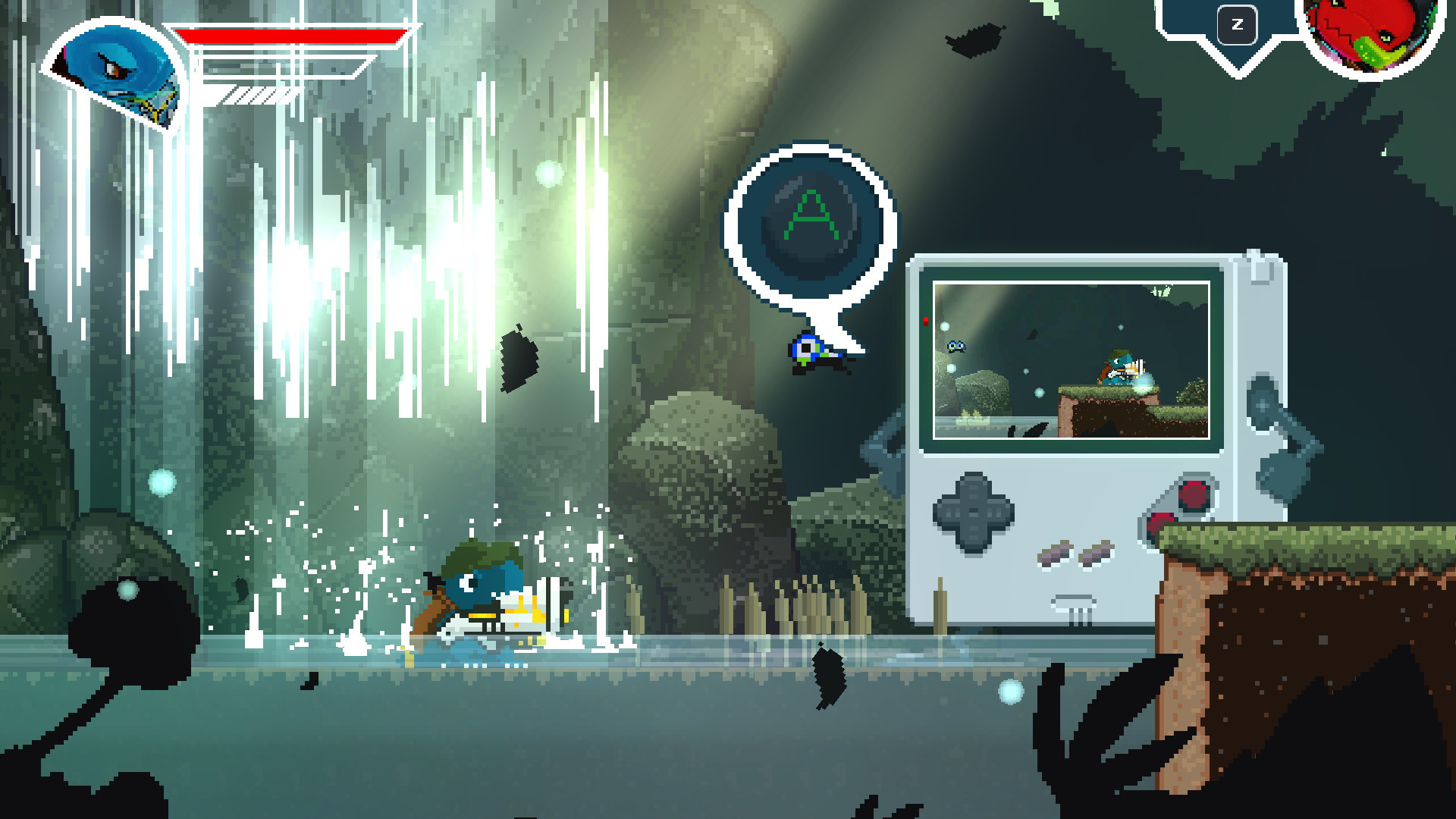 The enemies drop coins which you collect to charge up your Y button which you can then activate to boost your weapon for a few seconds. There are also occasional special weapon pickups (shotgun, laser, machine gun etc) all of which last for a few seconds before you revert back to your basic gun. The screen works in a kind of ratchet method whereby once you’ve moved right a certain distance you can’t then go back/left to pick up any missed coins or weapons, which can be a little frustrating. At intervals you’re given the ‘halt hand’ and the screen stops for you to clear a blizzard of enemies before you can move on to the checkpoint which usually follows. There are 3 or 4 satisfyingly tough bosses to defeat throughout the game, and this is where I would particularly appreciate full auto-fire to save my poor trigger finger. 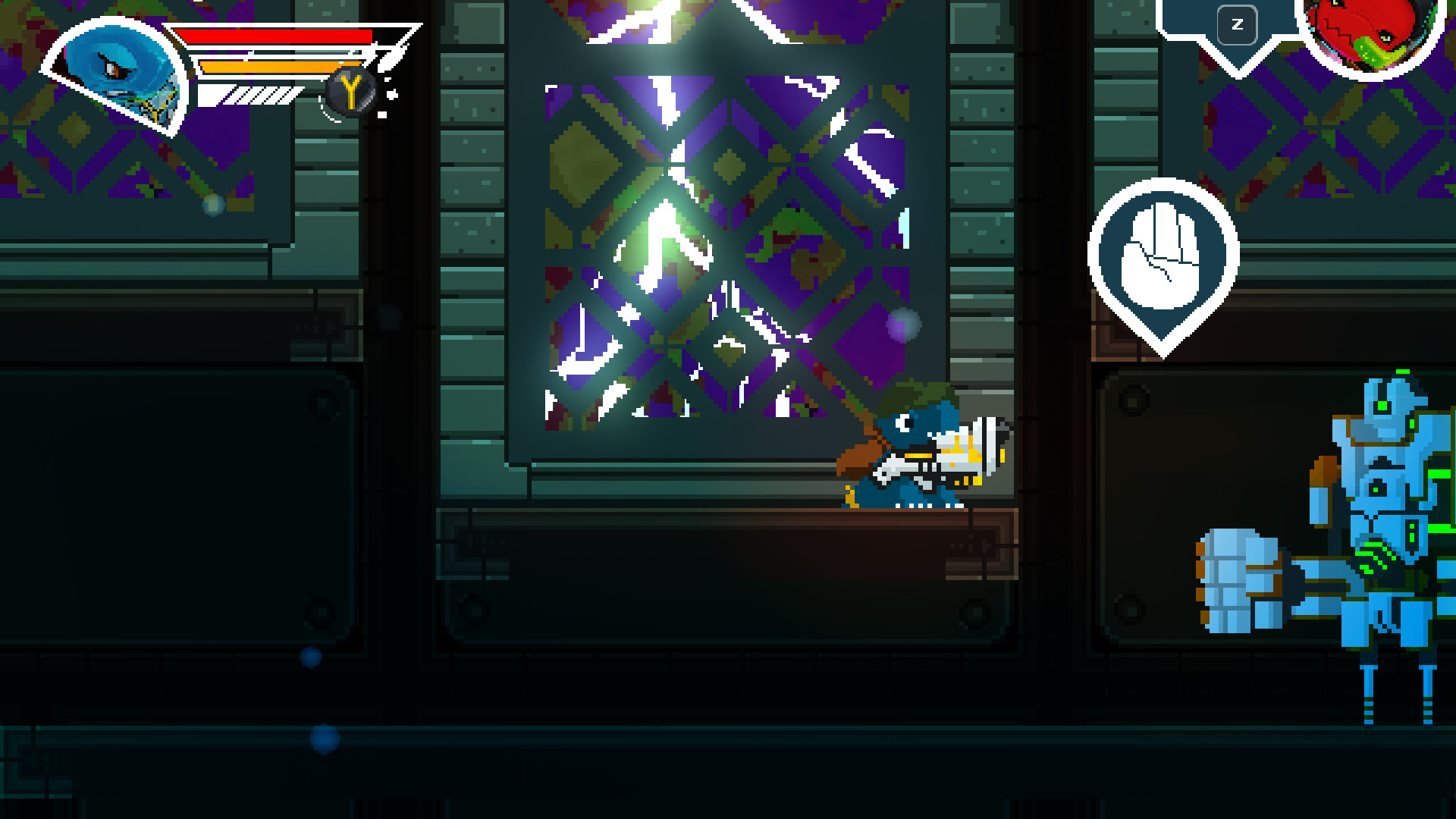 The game has a main map showing your route and checkpoints, but you can only jump in at points showing a trophy. There are points in between but nothing happens when you try to select them, which is confusing. Speaking of confusion, having defeated Professor Processor the game seems to be telling me that I’ve completed it, but the level overview shows a final section which is unreachable. It’s possible that this is a spare section earmarked for new levels yet to be implemented. I don’t know.

There is a storyline but there’s not much to it, and if you want my opinion this obsession gamers have with storylines is ridiculous. Why would you need one for a game like this? If you want a story, read a book or play an RPG. 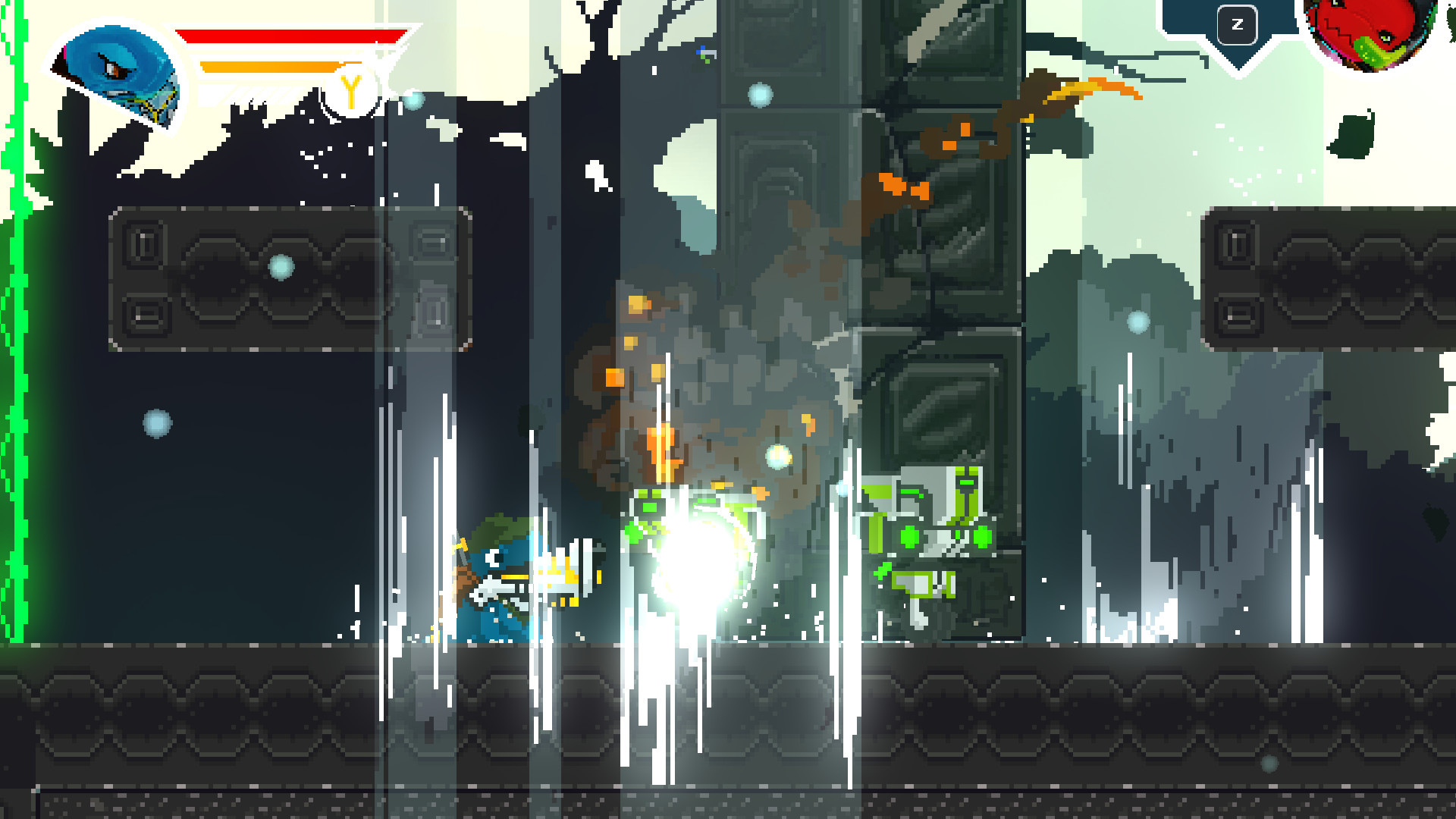 You can use keyboard or controller, although this type of game really needs the controller. The default button mapping is a bit unusual and takes some getting used to. There are 3 controller mappings available in-game but none of them have twin-stick mode which I think would be better. The left stick is used for both moving and aiming; you can aim left, right, up and diagonal and you do a lot of upwards shooting at the flying robots. You can hold left-trigger to anchor yourself in place and fire around you but I found no use for that at all.

I used the default settings with my Steam controller and it all worked as expected, although my trigger finger was starting to ache after a while because the auto-fire is quite slow so you have to pump the trigger to fire fast, which you want to do all the time! 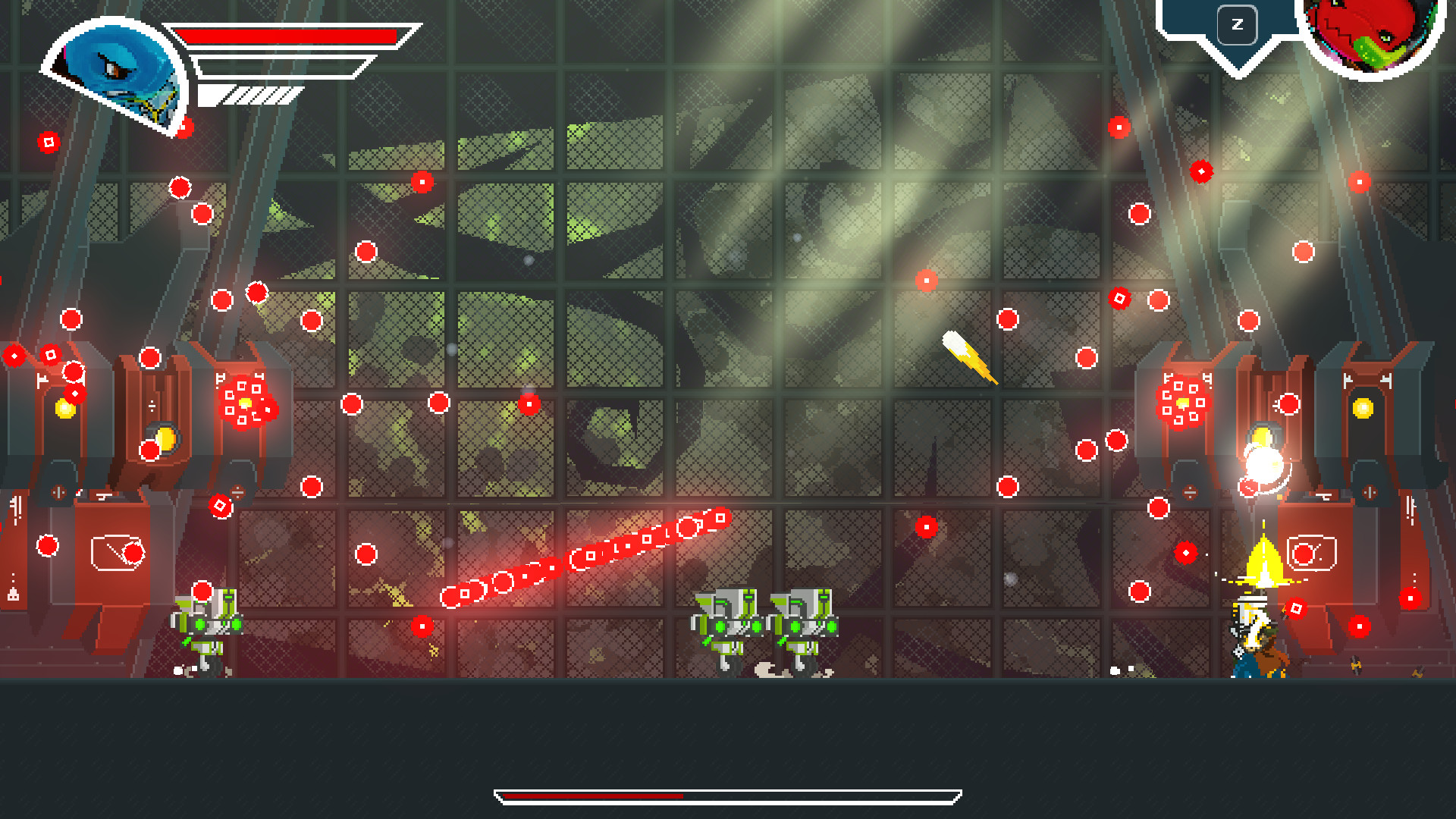 I’m not good at these types of games so I put it on the easiest setting (out of 5) but having no co-op partner makes it twice as hard so overall you could say I was on medium difficulty. With that said, I think they’ve got the difficulty just right. It was challenging and I had to retry some sections many times but none of it was impossible. Early sections were nice and easy, and on harder difficulty settings I think it would challenge even an expert player.

It has a chunky, pixelly retro vibe and chiptunes to match. I can imagine myself playing this on a big arcade machine back in the day.

I agree with others who have said the camera view is far too close. It makes the game feel cramped and you don’t have enough warning of the incoming enemies before they’re upon you. By the time you read this it has probably been fixed already, as there is an update promised soon to address this, so no worries. 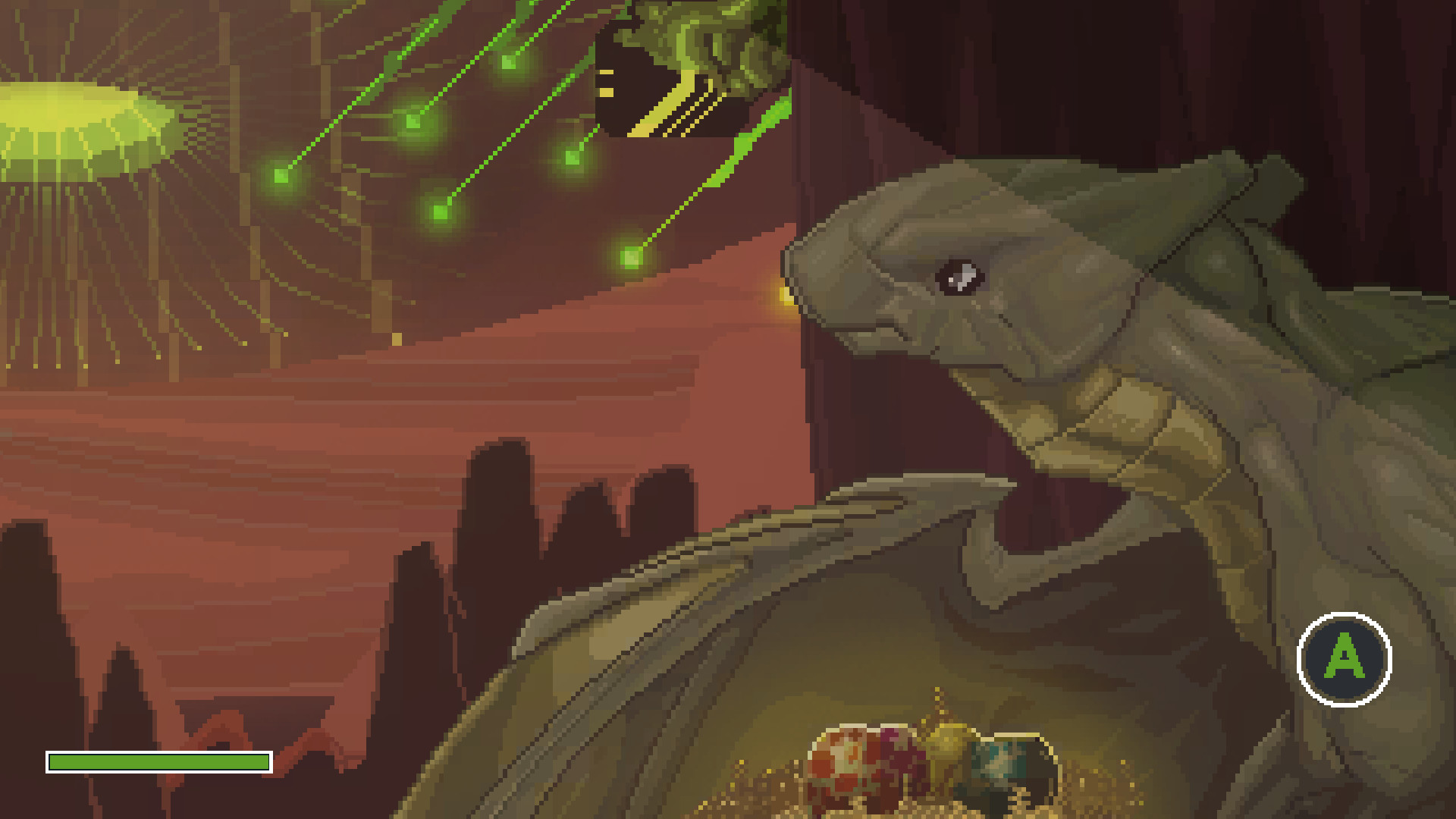 I played mostly on Linux, with a bit of testing on Windows just to make sure. The gameplay is smooth and responsive, no lag or glitches. It does have some strange behaviour in Linux if you try to switch it to windowed mode so don’t try. It’s best in fullscreen anyway, and can handle up to full 1920*1200 resolution.

11 achievements but they seem to be out of sync. When I get an achievement, it then drops the previous achievement I got. For example, when I defeated Professor Processor I didn’t get that achievement but instead my previous one (Beekeeping) dropped instead.

The store page says it has Trading Cards but there are none at the moment.

In-game stats but no Steam Leaderboards, which could be a nice addition. 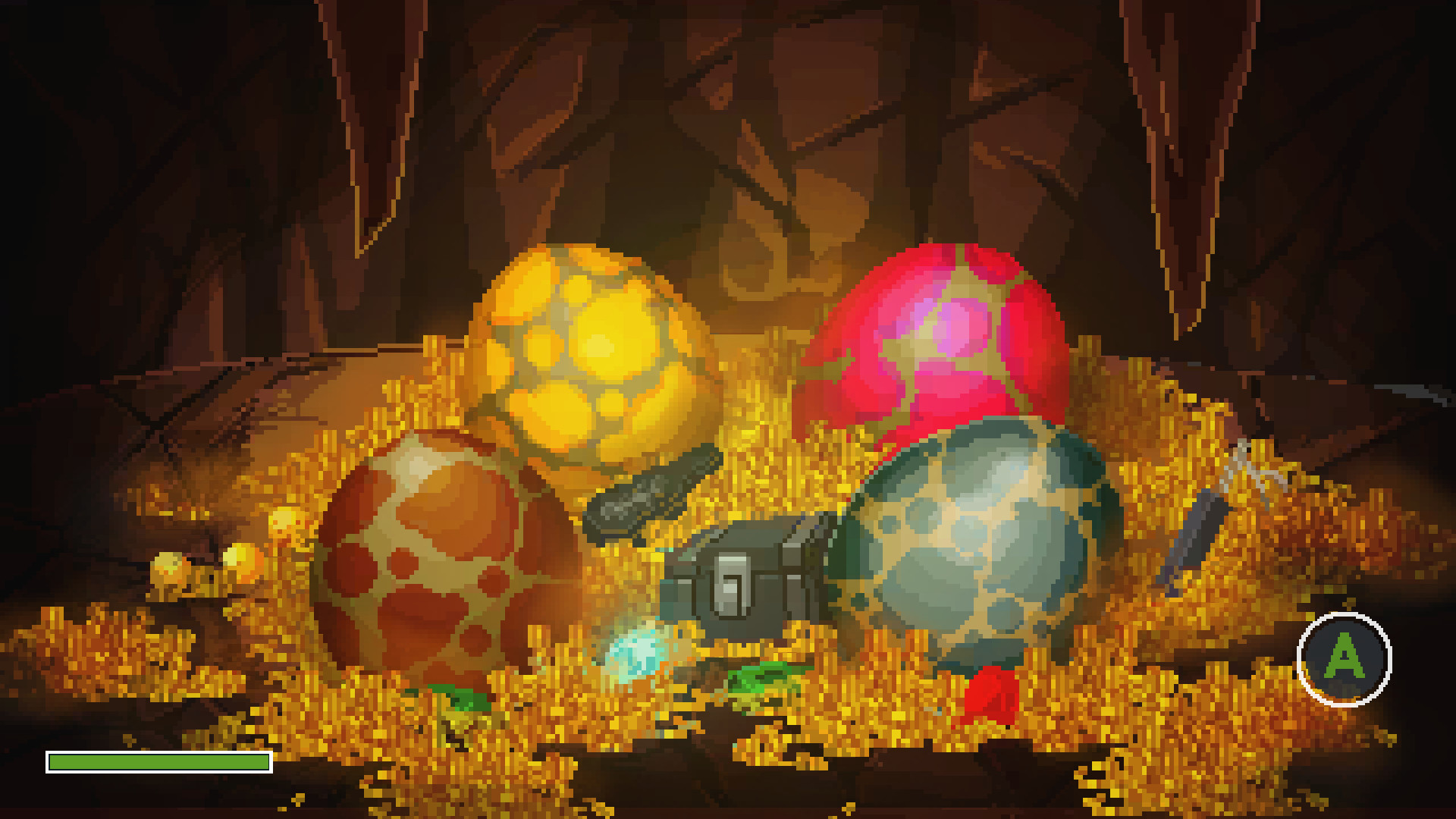 As far as I can tell I completed the game (see above) and it is rather short for the price. It has a lot of replay value though – you can try to beat your times and go for harder difficulty settings. The good thing is that you know exactly what you’re getting before you buy – the store video shows what you can expect, it’s a side-scrolling shooter, so if you like this genre then I think you will enjoy this game. If you’re in any doubt you can try the demo version.

There’s nothing unique or ground-breaking here. It’s a straightforward platform shooter, well executed and a lot of fun. There are still one or two rough edges to iron out – it is in Early Access after all – but nothing too serious.