Platformers have it hard these days.  It seems like there are hundreds of them being released each month.  Just looking at the sheer number of platforming indies can leave you at a loss as where to start looking for a good one.  Often, you view a page with some decent looking platformers only to find poor level design, broken controls, or levels so hard it’s just unsatisfying to bother playing  So, of late I mostly go off my friend’s recommendations.

A month ago, one of my favorite twitch streamers was playing Shu and tweeted how much she enjoyed the game and the art style.  Since she’s known to be an excellent platform player I jumped at the chance to play Shu for a review.  Now was my opportunity to see if  I’d have the same reaction as she did.   What I discovered was one of the best platformers I’ve played in 2016. 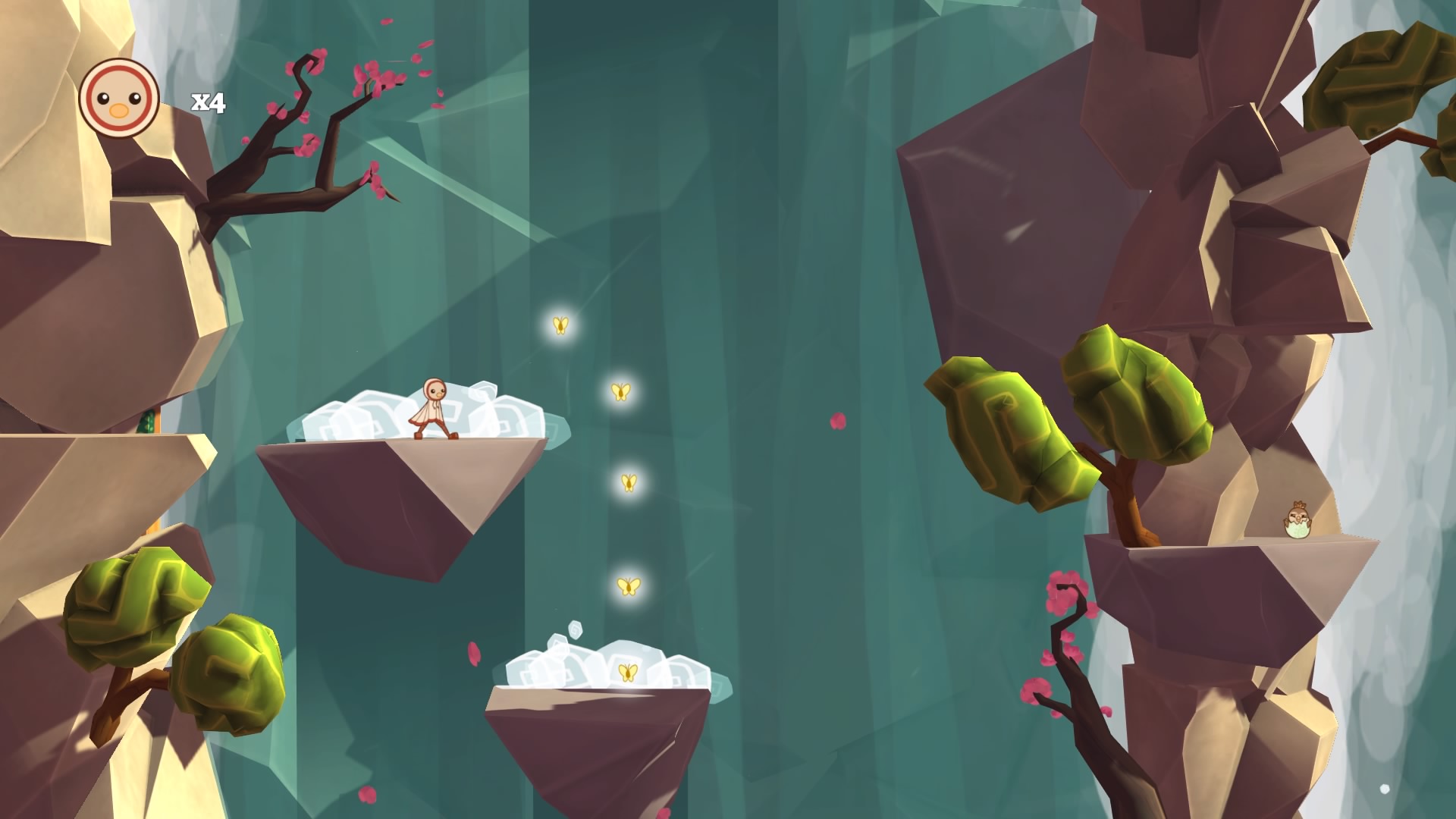 At the menu screen of Shu you’ll see a small figure looking into the depths of the forested world ahead.  This caught my eye with it’s bright shades of green foliage and soft blue skies showing only a few stepping stones as a guide into the woods.  You can’t see his face. All you can gather is his determination and the uncertainty of what lays ahead.  Yet, that’s the core of the game in a single image.  There is a challenge to be uncovered and Shu is going to fly into those hidden branches and pitfalls to take it head on.

After a short intro about an evil storm coming to destroy Shu and his village, we find our hero on a mission to  save his villagers in the wake of the oncoming deluge.   There is the usual jump action along with a floating jump in the control scheme. I could jump nice short jumps with no issues and a very high arcing jump for long range with good accuracy.  The floating jump enabled a very precise movement but also needed quick reflexes to nail down small openings where it was required.  Good controls all in all except for when I landed sometimes Shu would slide a bit and I’d come teetering off a platform. I think that was user error more than controls, however, so i got a little better at working around that small slide action.  It could also be my controller is getting worn out. 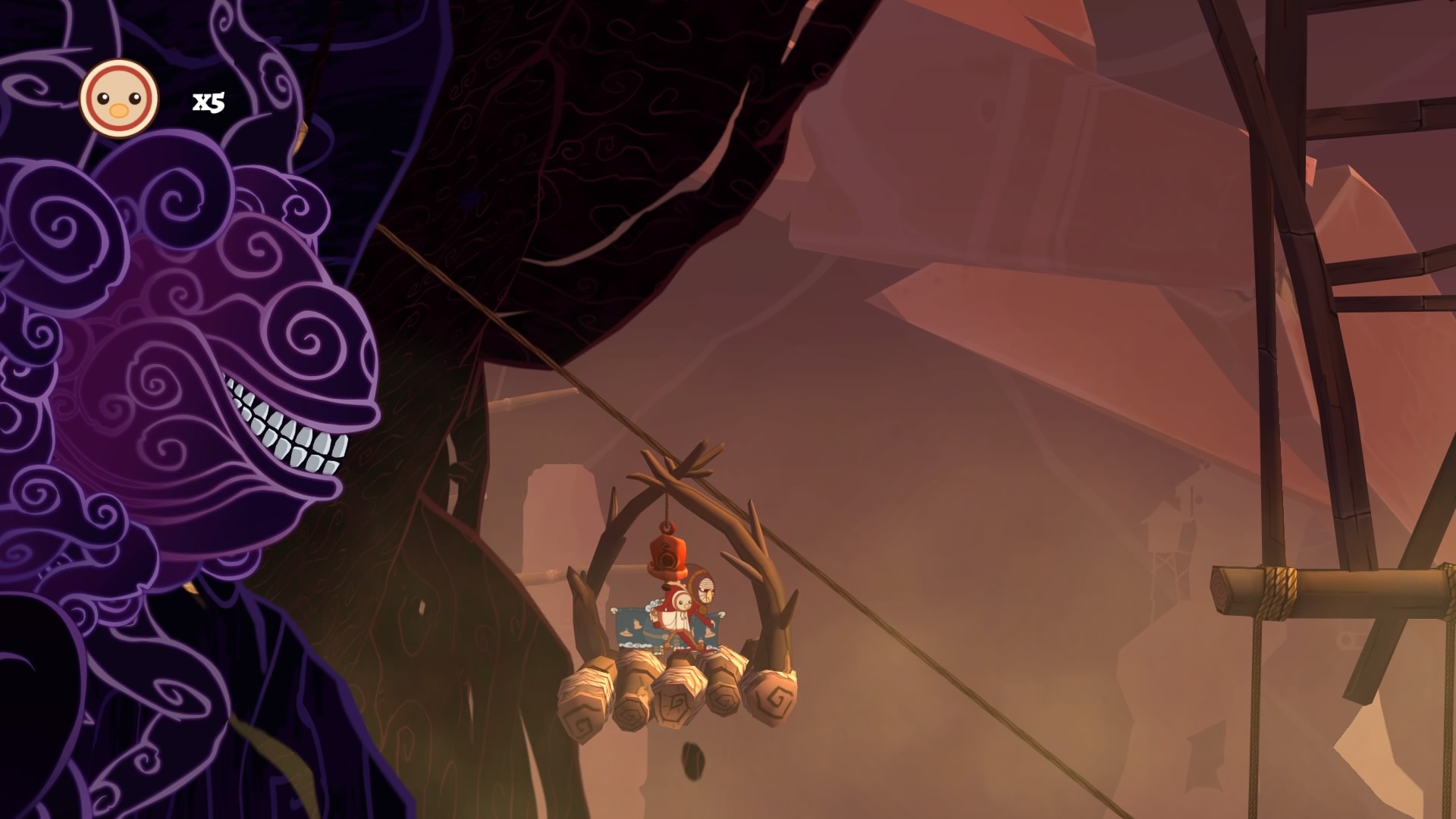 Tiny glowing butterflies lined the pathways forward, guiding the player towards the best route to follow.  Right from the get-go, with the 2.5D graphical elements and soft color toned backgrounds I could feel a strong Rayman Origins/Legends vibe.  Those  floaty controls were all too familiar.  Substitute some butterflies instead of lums and with the cartoonish art style it didn’t take long to feel the impact of Rayman on this game.  Yet, Shu did not have the same button movements exactly and there is no attack from what I could see.  Rayman is generally more over the top and fantastic with wonderfully silly music and art characters.  Shu is more toned down, concentrating solely on the platforming at hand with substantially less artwork-come-to life happenings.

As you play you’ll find there are friends to be rescued, and when you rescue them something very interesting happens – you acquire their skills.  This varies from game section to game section, but a short list of added moves are a crushing downward jump, bouncing off walls, walking on water, and opening alternating platforms  These skills only stay with you through a few levels in each section since your friends are eventually rescued by the end of each level subset in a game area.  It’s an amazingly good way to change up the gameplay.  You are no longer limited to your short jump, long jump, and float actions.  Adding the friend’s skill-sets seriously amps up the difficulty as you have to alternate between all the new skills quickly from world section to world section. 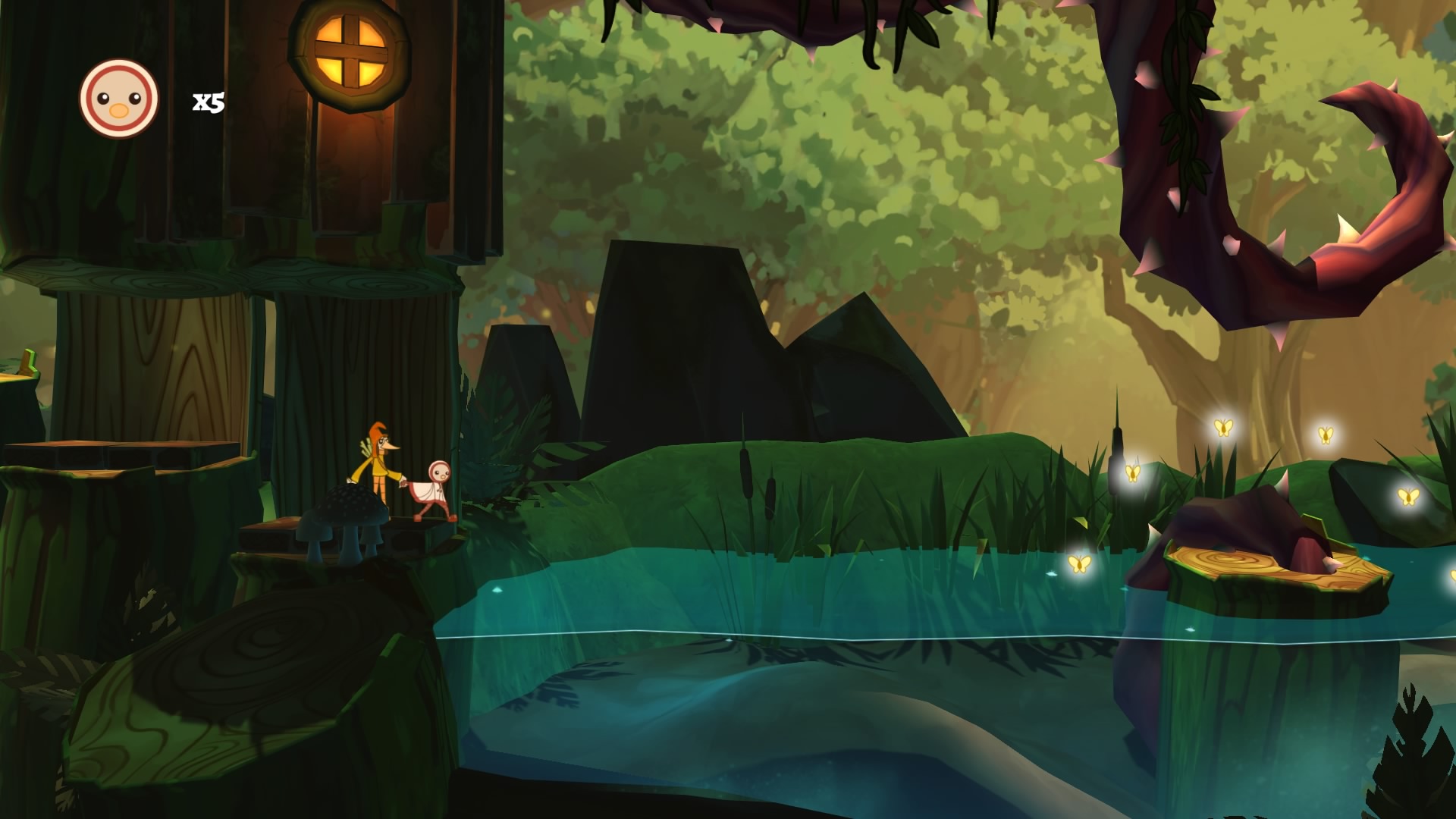 The game has a generous quantity of checkpoints throughout each level.  However, there is a 6 life limit per checkpoint that can run out quick if you speed through without paying attention. Shu is not designed nonchalantly, there are headspaces, jump maneuvers, and quick skill-switching actions to be addressed.  Herein lies the real game difficulty.  It comes down to how well you play platformers and if you have the reflexes and hand coordination to do it.  Otherwise, you will be running out of lives and  have to replay the entire level again.  This will ultimately vary from gamer to gamer.  I know folks who can breeze through most platformers and others who rarely if ever touch a platformer and die quite quickly.  Your game time will be entirely dictated by which type of gamer you are.  Personally, I fall somewhere in the middle as I love platforming but my reflexes don’t always live up to the task.  I died quite a bit, but I still feel that the levels were very fair and no area was impossible or hampered by poor game design.

Collectables are also part of the gameplay for completionists.  In every level there are a number of baby birds to be rescued, usually they are relatively easy to grab but require going off the beaten path.  It comes down to how fast you want to finish because it is fairly involved to rescue them all, affecting speedrun times.

Sound design, while very calming with subtle and softly textured compositions, is not a main component of the game.  It mostly guides the game along, leaving the graphics and platforming to concentrate on.  I’m actually grateful for that, because many jumps required me to think carefully about my next few moves.
In each game section you’ll have a level where you must outrun something.  These are the fast and furious game levels where you’d better not waste your six lives.  I won’t ruin the fun of discovering these, but once they occur be ready to move your fingers quickly because there is no mercy from the oncoming danger.  You’ll likely die at least once on those, more so for gamers without quick reflexes. 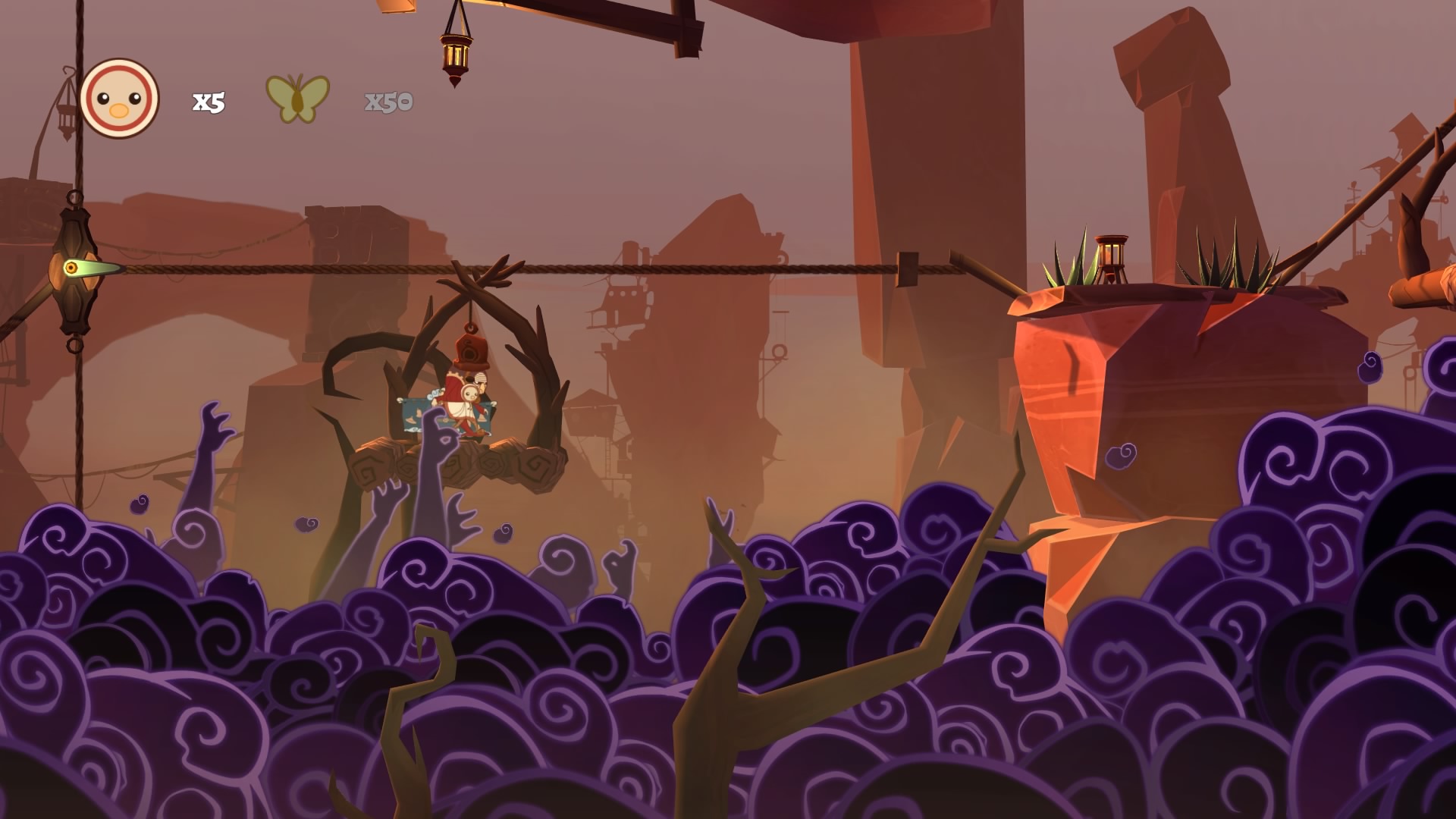 With the cute characters and hand drawn illustrated feel to the game, it leans towards a family friendly experience.  I put this to the test with both my 8 and 9 year olds.  My 9 year old being the most gamer savy, completing nearly all the Lego games on his own.  Their immediate reaction was that  Shu and his  game world were amazingly colorful and fun. Both enjoyed the early stages. A few minutes in, however, we came to the part of a level where you have to run  for your life. Both kids died multiple times and eventually gave up.  I was promptly handed the controller to get through to the next level.  This happened again and again until both lost interest as the levels got harder.  The fact that once you ran out of 6 checkpoint lives, the level had to be restarted upset them slightly as well.   So, as a family game Shu comes off fine as long as you’re in the same room playing with your kids.  As a standalone game for children, I think it will be beyond the abilities and patience level of the majority of younger kids. 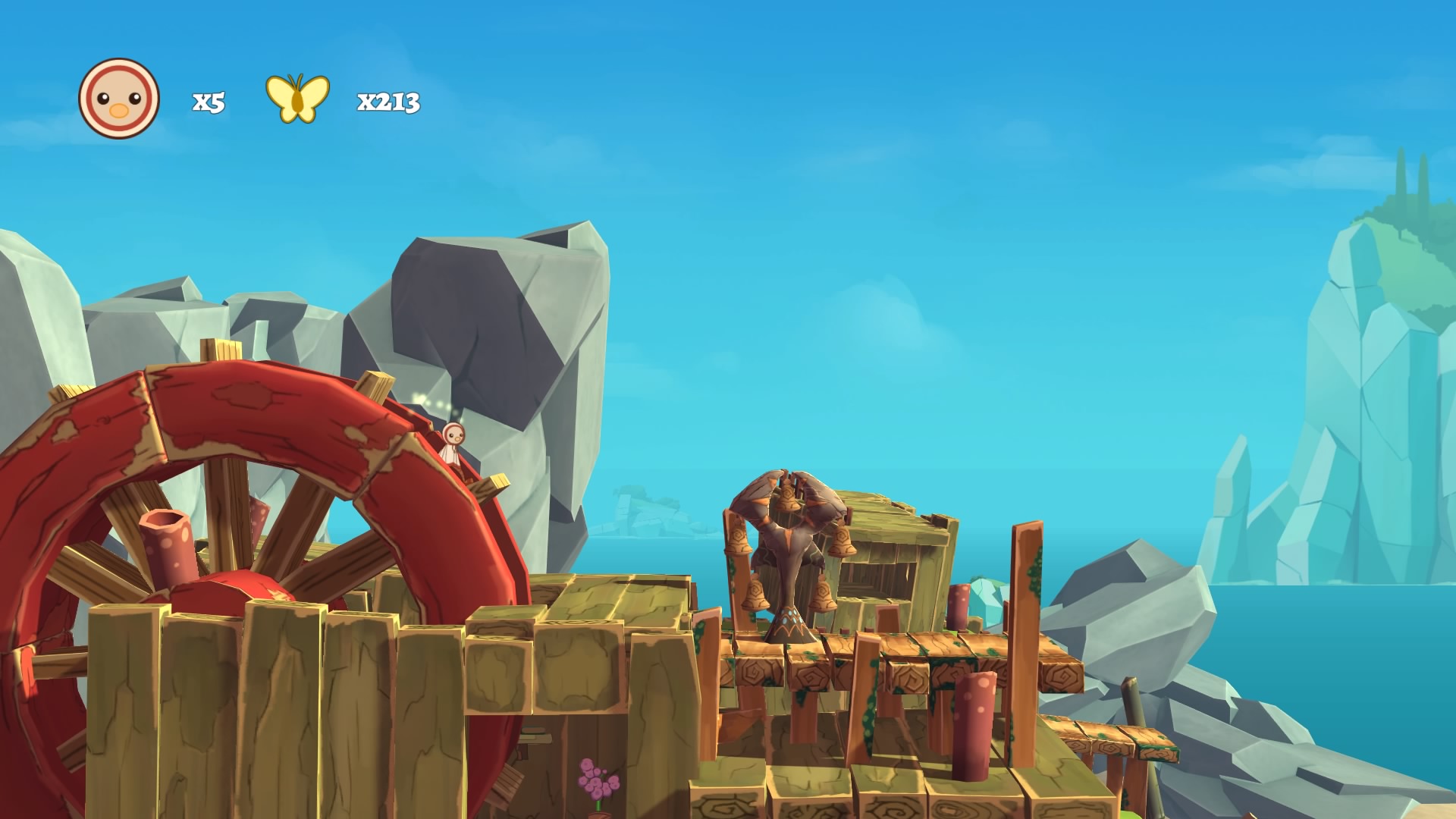 How does all this stack up compared to the seemingly endless slew of platformers in the market I mentioned? Quite well, actually.  Shu is a meticulously well crafted game.  A platformer for purists that delivers immense satisfaction amid a backdrop of exquisite color and tension. Want to be chased by a storm monster while navigating a series of ground pounds,  platform openings, and float moves? Check.  Want to narrowly move between one hit death spikes while bouncing off walls and maneuver a jump in just the perfect position to avoid colliding with briarwood branches from hell? Check.   Want a game that you can speedrun with friends and feels like you honestly achieved something?  Check.  Want a variety of skills that change from section to section and make each section unique to it’s own?  Check.
There were very few complaints I had about this game, only a few glitches here and there.  For some reason level 1 of Warbler Forest had all the graphics in shadow.  Adjusting the graphics options did nothing and once I finished level 1, level 2 looked just fine.  I also had difficulty getting an xbox 360 wireless controller to work.  None of the buttons worked at all unless I used the keyboard to remap the buttons.  A wired controller worked straight away as did my steam controller.  I played mostly with my steam controller at that point just to see how it felt and had to remap the RB button to the inner handle button. 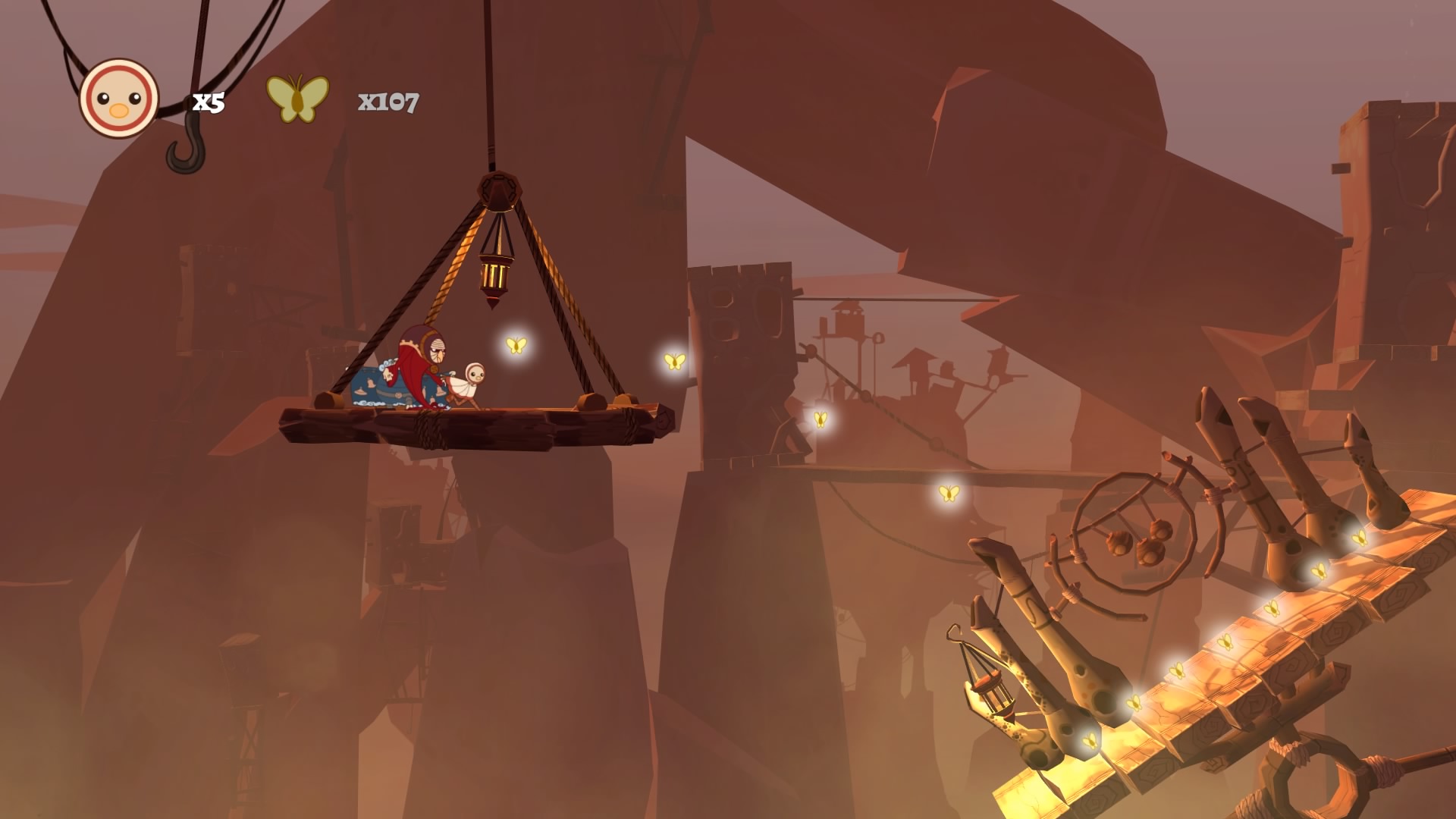 You will have a hard time finding an excellent  true platforming game like Shu in 2016.  It’s gorgeous, exhilarating, and incredibly well designed.  It’s also not too easy or hard, balancing that fine line of creating a perfect difficulty level. Inside you will find a lot of challenge for the average gamer and speedrun challenges for the very experienced gamer.  If you enjoy platformers like Rayman, it will be a breeze to fall into the controller scheme as well.   I wholeheartedly recommend this game if you’re looking for a good platformer because you need to yell at the screen after missing a crucial jump on your last life.  It’s got it and it’s got it good.