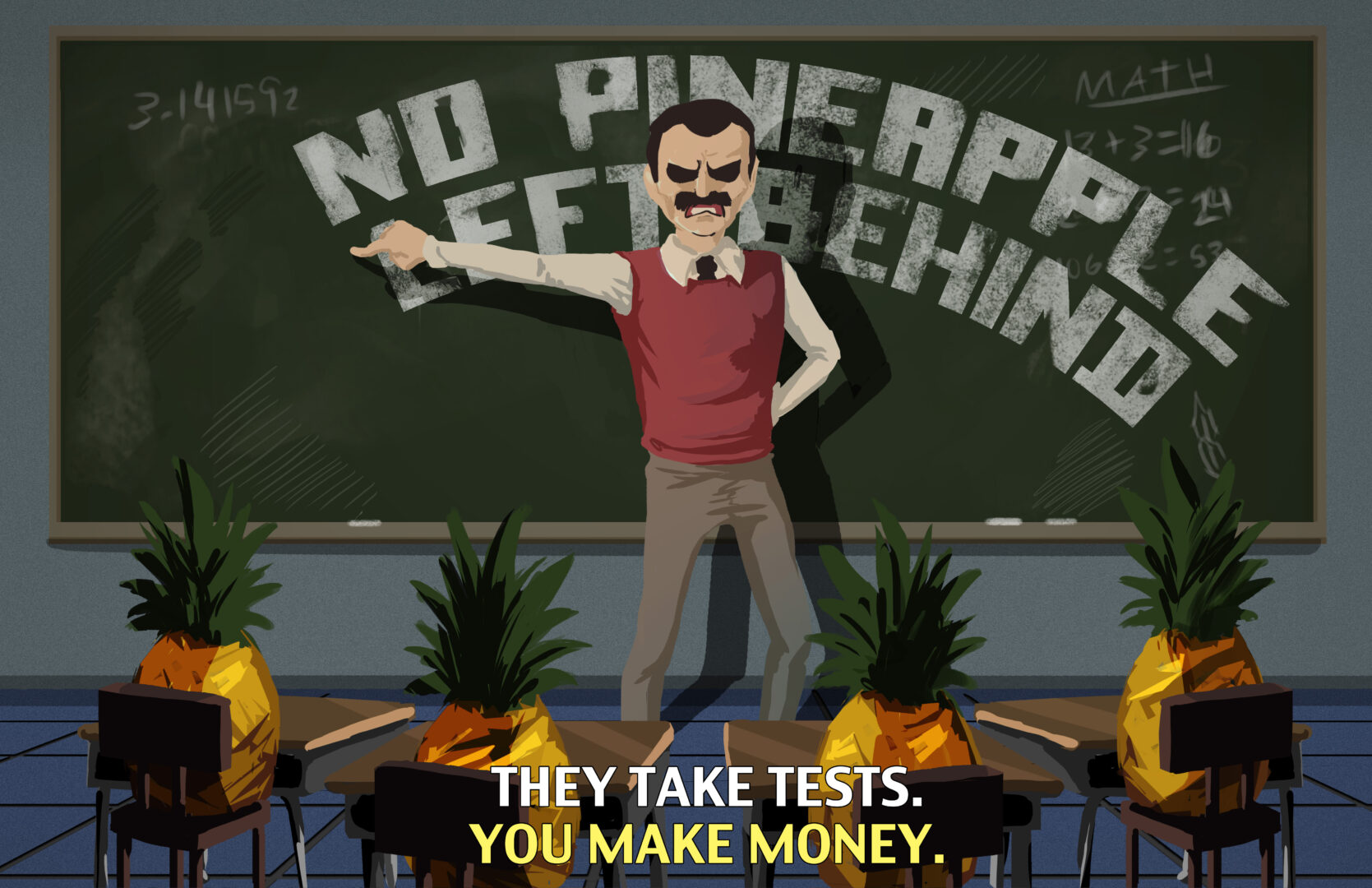 REVIEW: No Pineapple Left Behind 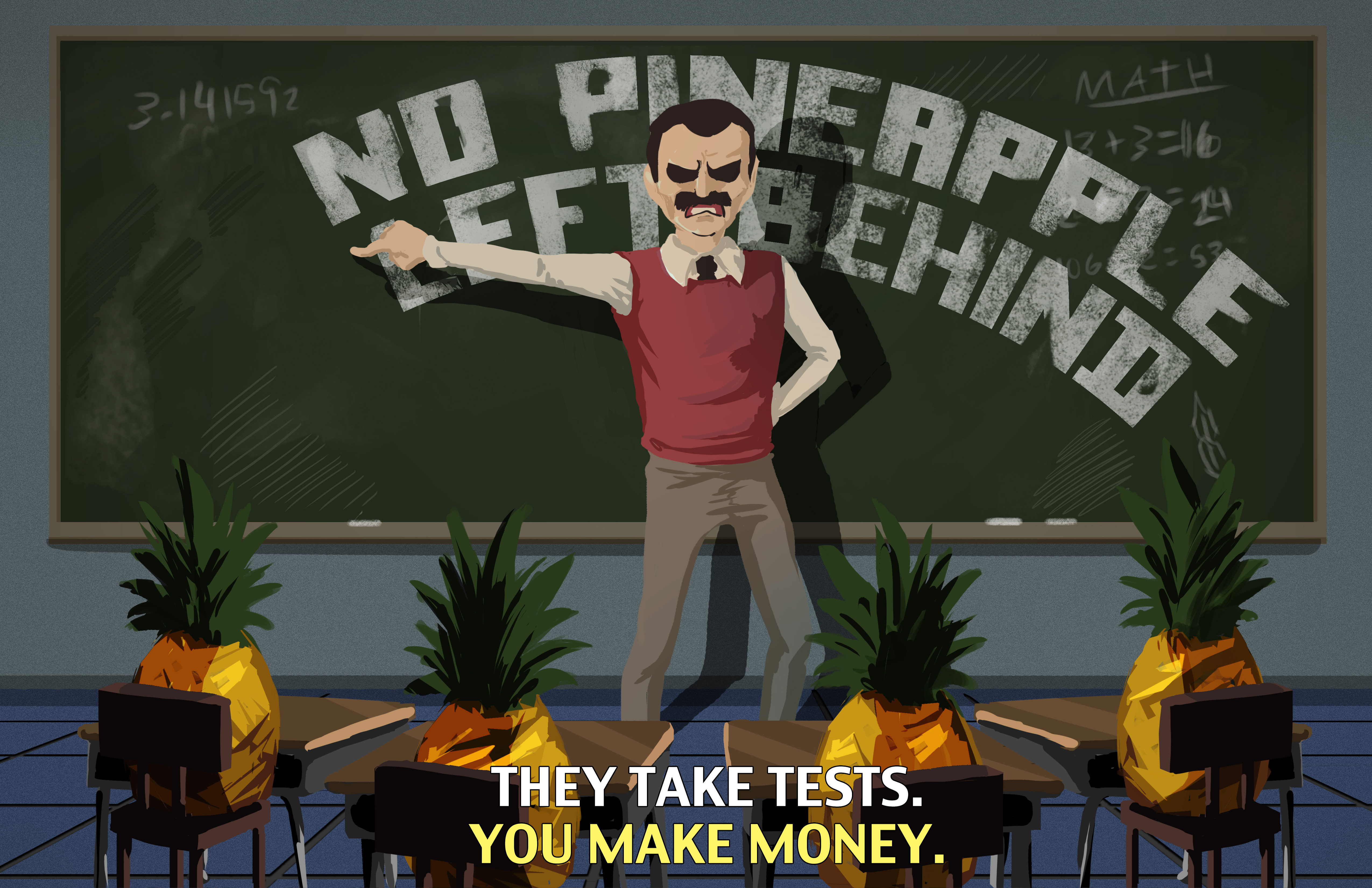 No Pineapple Left Behind provides an interesting concept which if implemented correctly can make for a pretty good experience. But does it really make it work? Let’s find out: 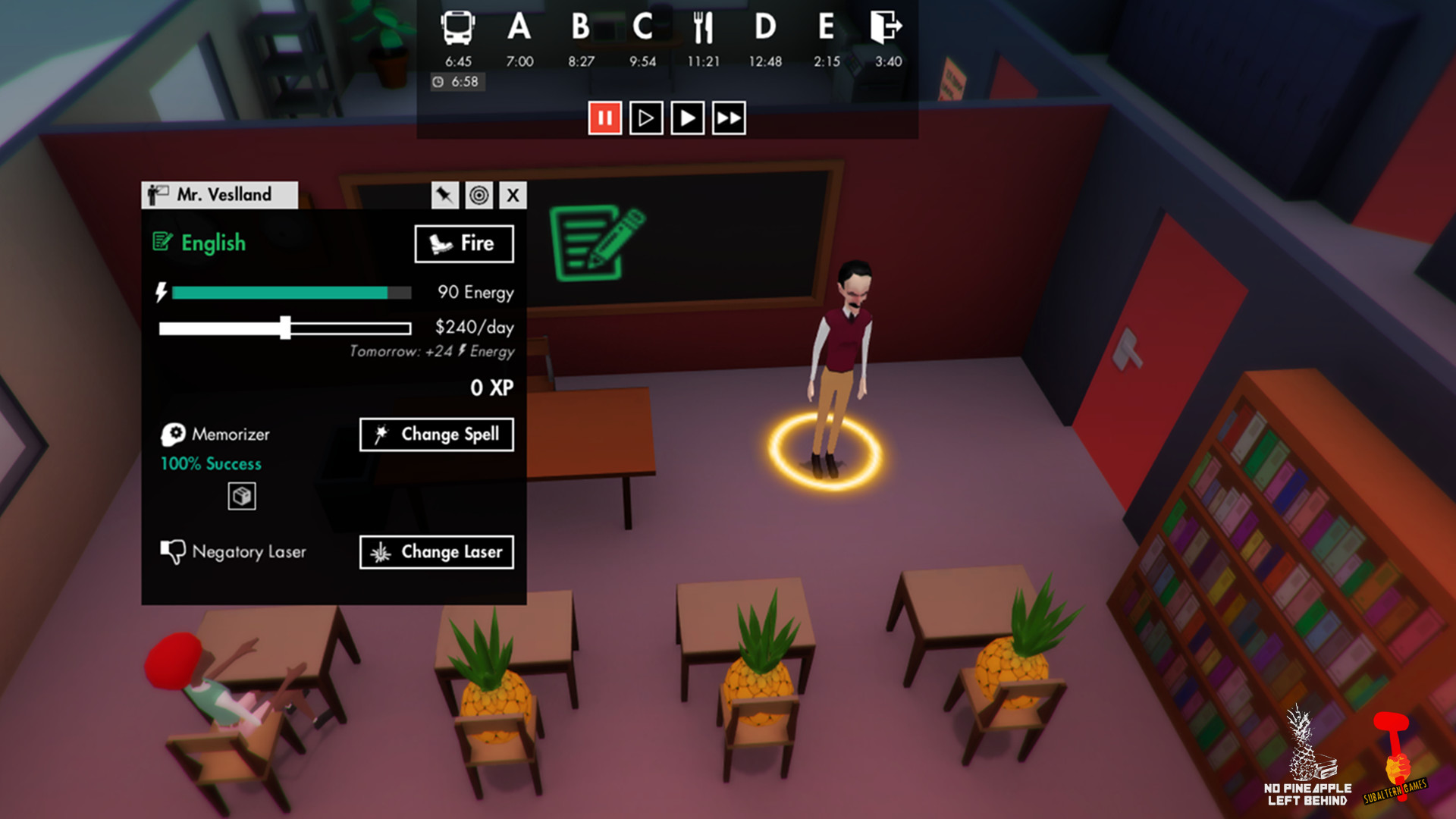 No Pineapple Left Behind is based on the US educational system which is supposed to make kids smarter by forcing them to study and improving their grades. No Pineapple Left Behind gives you the objective to turn normal kids into pineapples by reducing their humanity. While a normal kid can have many traits and distractions, a pineapple is a perfect student who won’t do anything other than studying. You have to turn all the students in your class to pineapples, so that they bring better grades and in turn get better funds from the government. I live in a country where this is implemented much harder than it is in US, where students are judged on the grades they bring in one exam and are forced to study things they don’t want to. Being a very recent victim of this, this game should have connected with me more than it actually did. While the concept is interesting and is handled in a humourous way, what lets down No Pineapple Left Behind is its gameplay. Your teachers cast spells upon students to try and reduce their humanity inch by inch and slowly turn them into pineapples. Pineapples usually score more and government provides funds to pay teachers which then determines the energy of the spells and the chances to reduce humanity. You might have gotten the feeling that there is a lot of complex micromanagement involved in the game. In a simulation game like this, it is very important that all this micromanagement comes together. But here, it does not feels good enough. There is a luck factor when the teacher cast their spells and if it fails, it will return some of their humanity. Teachers have a specific energy which depends on how big a paycheck they’re getting. You are given a few periods or classes till the end of the day when everyone packs their bags and leave. After you perfectly pineapplize a school, you move on to another school and so on. Another thing here is the painful way of scrolling. To scroll up or down the screen, you have to hold down the right mouse button and then scroll. Since scrolling and clicking is a major part of the gameplay, it makes it a lot more difficult than it ought to be. And there is no key rebinding for this, so you get stuck with it from the start and till the finish. The gameplay quickly gets boring and I was struggling to play it after the first 30 minutes. Everything is done in a loop and does not feel interesting to take part in after some time. Even the traits of the students like who he is friends with and what he does is not engaging after the 5th time you’ve read it. The tutorial itself is very short and does not give you enough to learn the game properly. 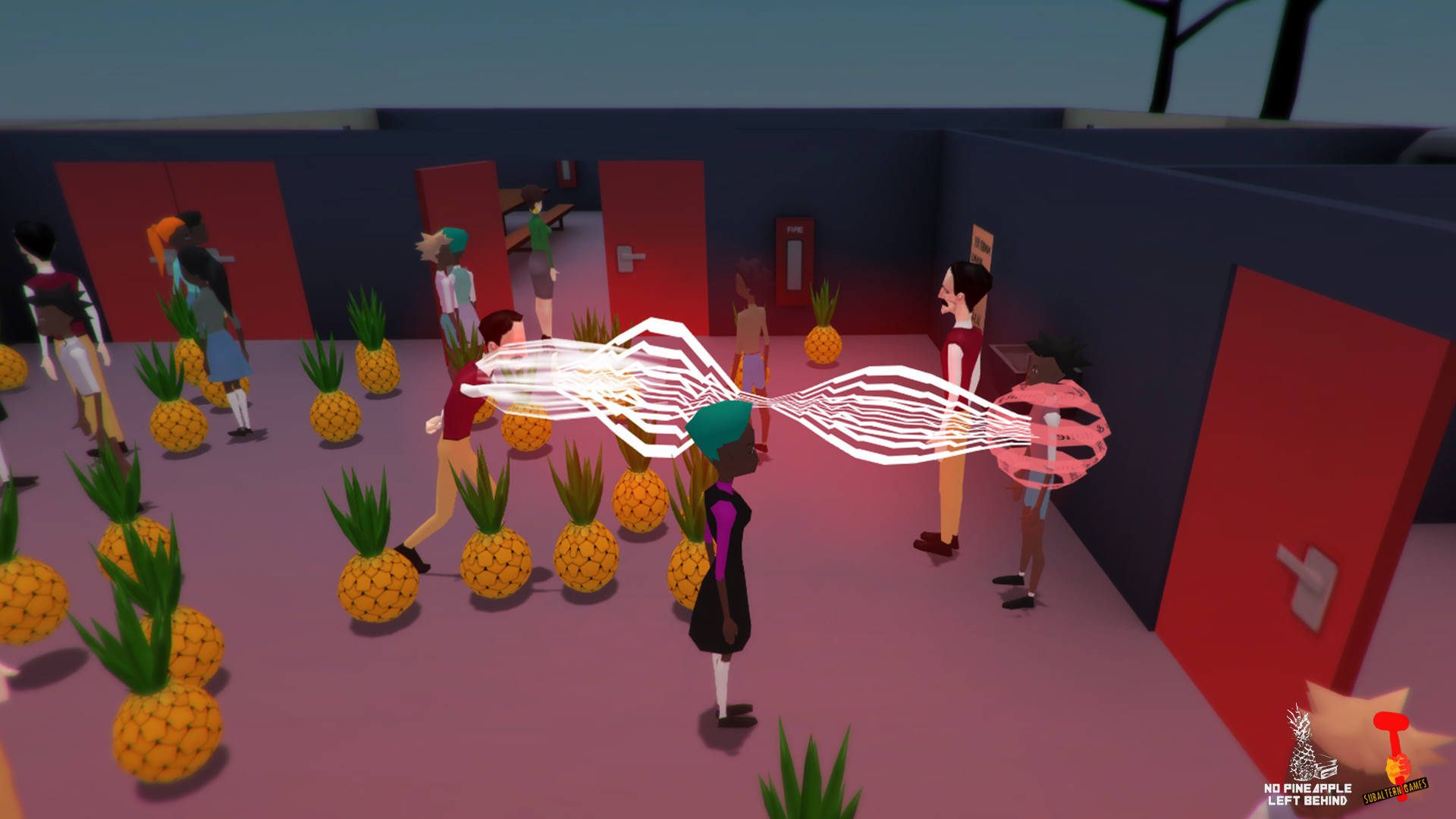 Since No Pineapple Left Behind is made with Unity engine, all the assets used here are those you must’ve seen before. It looks pretty bland with no unique flavour aside from when all the students are turned into pineapples and they are all sitting down on desks. There is nothing more funny than sitting pineapples here. The UI of No Pineapple Left Behind is pretty bad. The menus clutter the screen and there is far more on your plate than is needed. The traits of the students and other stuff are written in quite small letters and you have to strain your eyes to actually read the interesting stuff. There are not enough colours here to pop your eyes and everything that is being done is shown in a pretty boring way. The only colours that come up is when the teachers cast their spells and some coloured squares pop up. Otherwise, everything here is pretty meh. 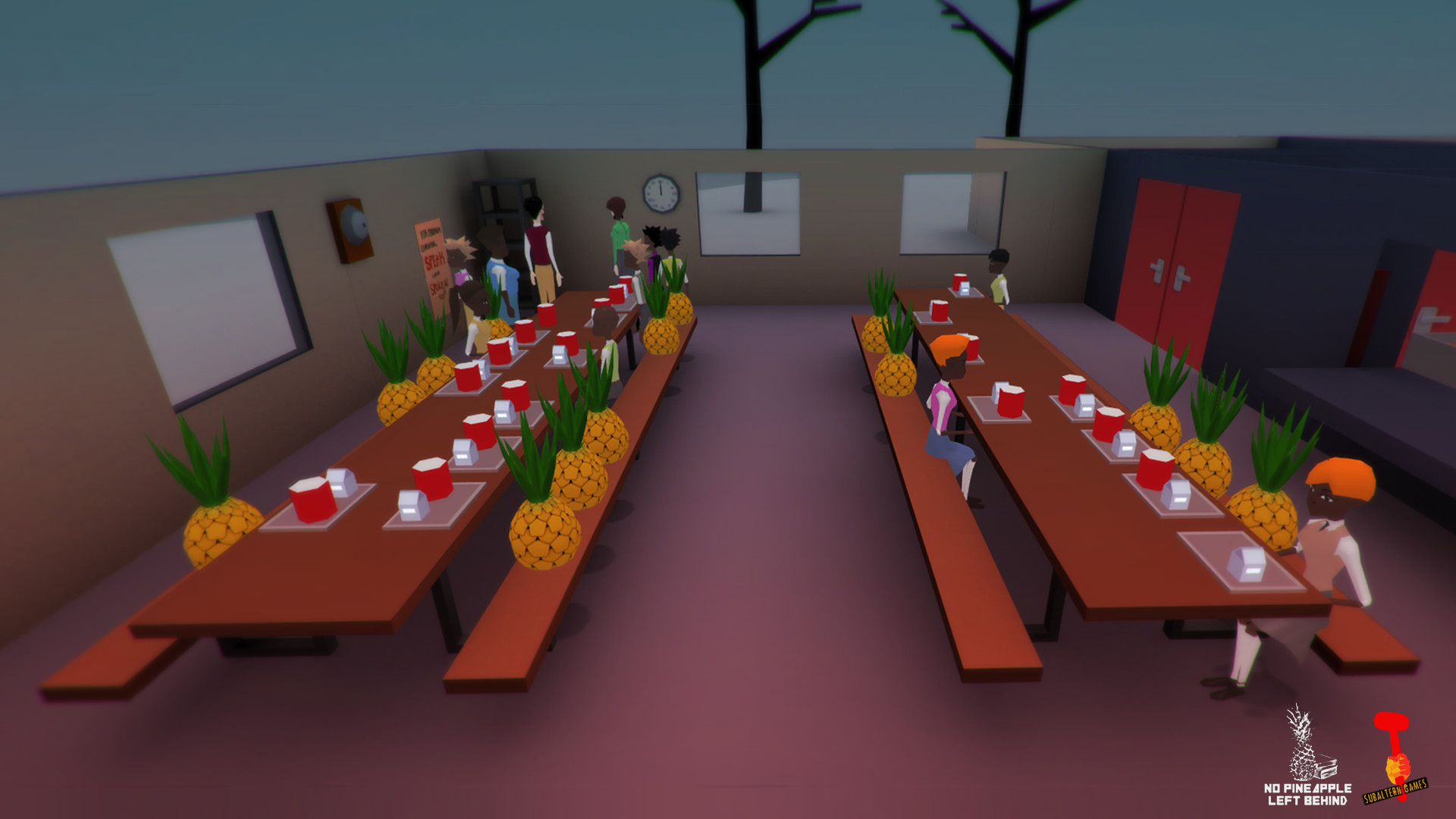 Basic at its best, annoying at its worst. No Pineapple Left Behind features a pretty basic score with only the background music being pretty well done. Other sounds involve sounds which are heard everywhere whenever you click and do stuff. Since there is no major voice work or anything, there is not much here to talk about more

No Pineapple Left Behind takes an interesting concept and builds a game that is not even half interesting to play. While it feels good in start, it quickly becomes stale and boring. Bland visuals and an okay soundtrack does not do enough to redeem it. No Pineapple Left Behind is a game that hurts me more than it should. There are far better games to spend your money and time than this.