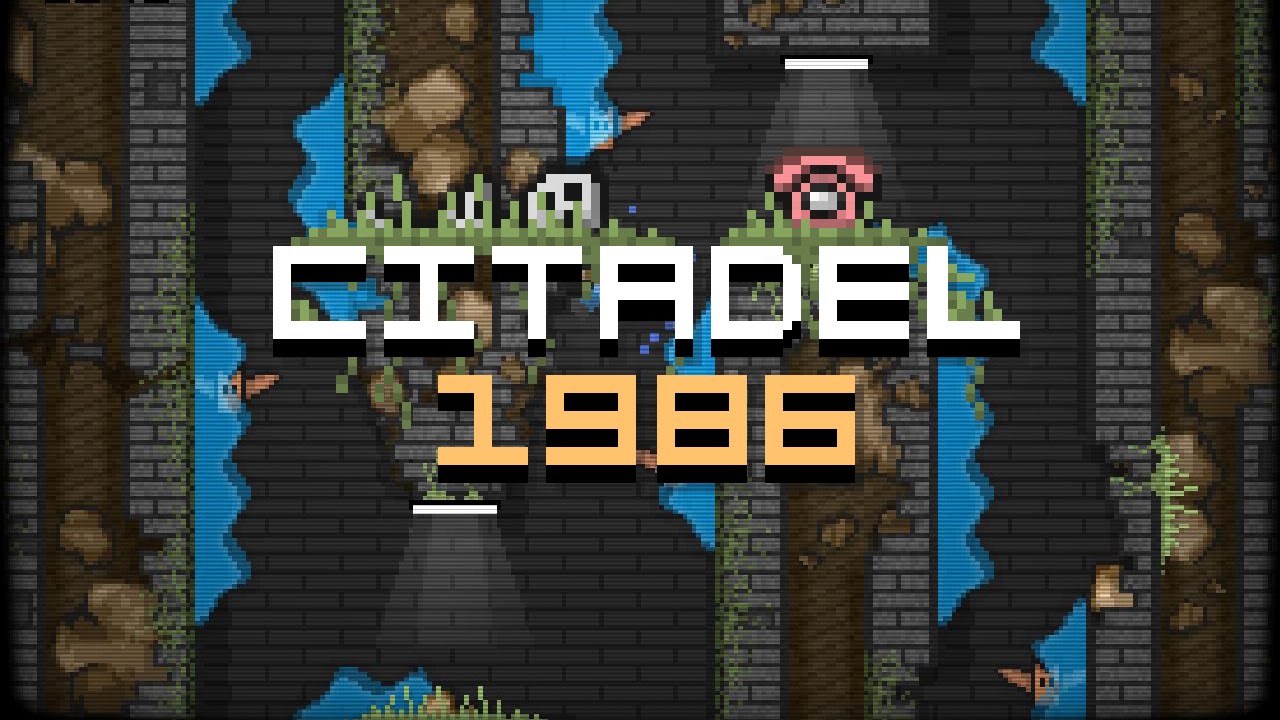 Citadel 1986 is an interesting 2D platformer in which you take control of a probably nameless guy in a facility ran by a robot so you can jump around and collect keys. Unfortunately, it suffers from multiple problems that made it hard for me to enjoy. It’s not that it was a bad game, it just had several problems that made it less enjoyable each, but I at least got an amount of fun out of it, whether it was small or large. 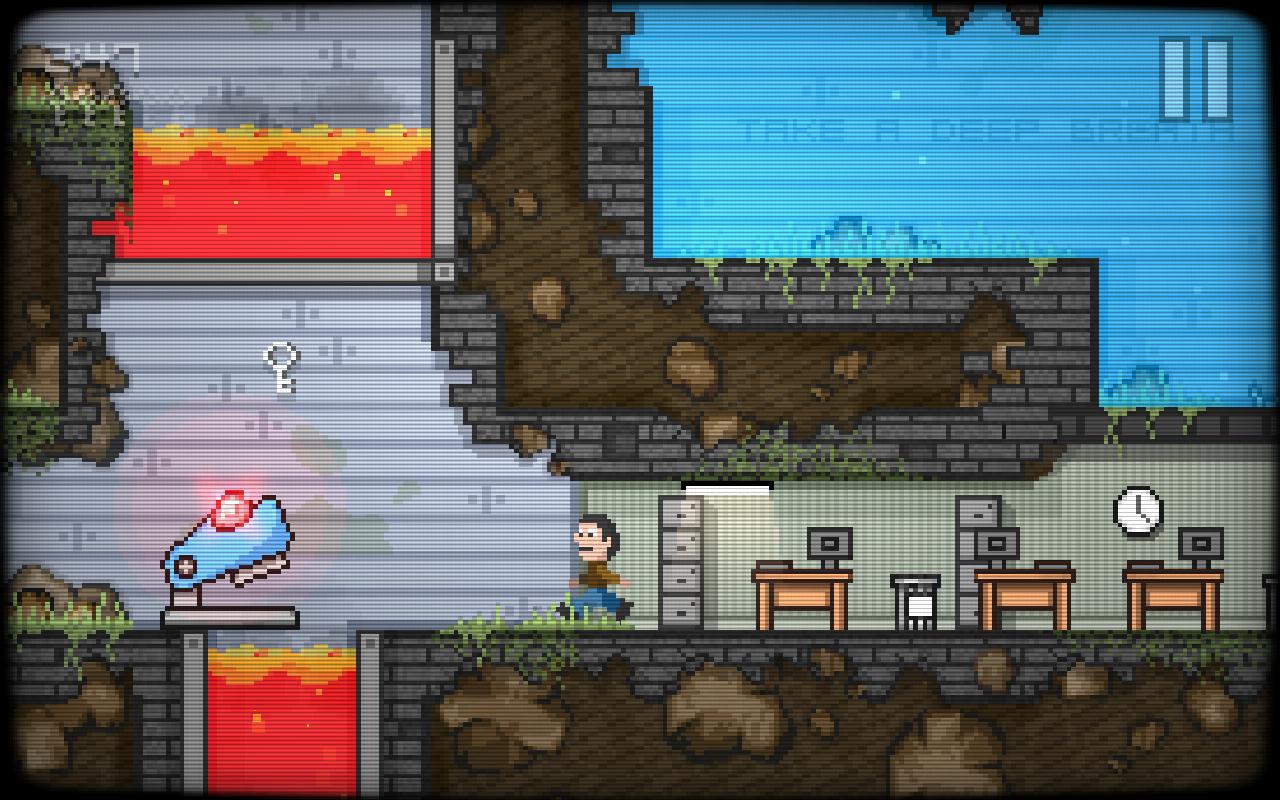 One of the biggest issues in this entire game is how much of a lack of control you have over your character. In a platformer game, you should be able to control your jumps fairly well, but in this game, your jumps are extremely limited. If you jump, you can only ever jump one height. If you tap the jump button or hold it down, you’re always jumping just as high. When you jump, you also have very little control while you’re in the air. A+ in realism, but frustrating to play. If you jump and realize you’re jumping into an enemy, you are almost never going to be able to take it back and survive.

The game itself isn’t really that interesting in and of itself. You just have to collect a certain amount of keys in the zone you’re in, and then move onto the next zone so you can collect more keys. Repeat that for the entire game, and you’re done. There are two boss fights throughout the game, a midway boss and a final boss. I’ll admit that I had to google how to beat the midway boss, but that’s because the game just gives you very vague hints, which I am all for. I’ve never had a problem with vagueness in games, just as long as it’s able to be figured out, which it was. 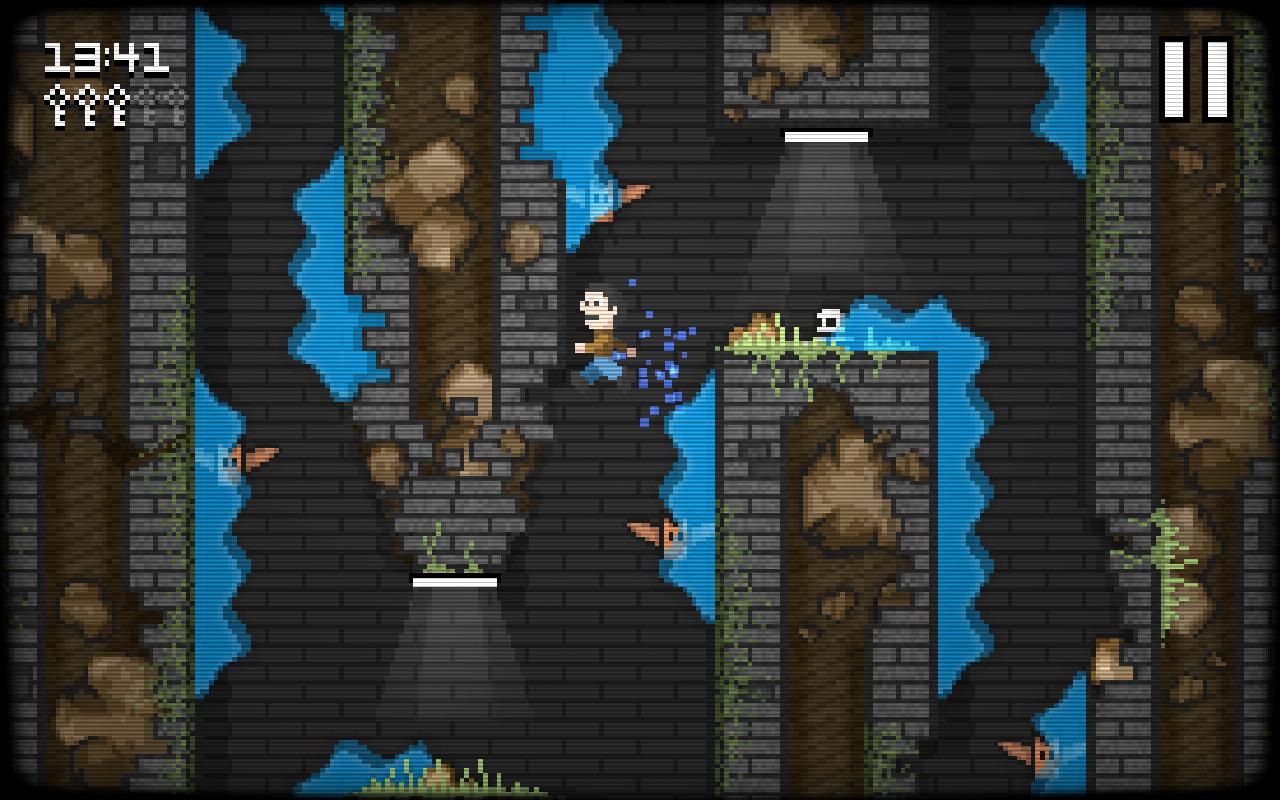 I did actually figure out what to do before I googled it, it just wouldn’t work when I did it. You have to do something at specific moments, otherwise death. And that’s a way to summarize this game. Do very specific things or you die. Not that that’s important, the only time death matters might be during the fights. I don’t remember if I’m being honest, because once I learned what to do, I don’t think I died, so I never learned if you have to restart.

Other than that, death doesn’t matter. If you collect three keys and then die, you don’t lose the three keys. You’re just placed back at the beginning of the zone, and you just have to make your way back to the keys, which also doesn’t matter because each zone is fairly small. Dying is also Super Meat Boy-esque, in that when you die you instantly respawn back at the beginning of the zone. No life loss, no transition, no cutscene, just death, respawn, keep playing the game, which I like.

One of the most inexcusable problems though, is one feature. One way that you can die. Fall damage. Yes folks, another 2D platformer in which you can die via fall damage. Just like Bubsy, in this game, falling too far is punishable by death sentence, and the means of execution is pixel explosion. Back to the controls, if this game controlled well, fall damage wouldn’t be that much of a problem. Still annoying, but not as annoying. You could at least blame yourself if you fell too far, but if you jump and realize you’re about to take fall damage you’re not going back. Just let go of your mouse/gamepad and take it like a non-distinct gender. 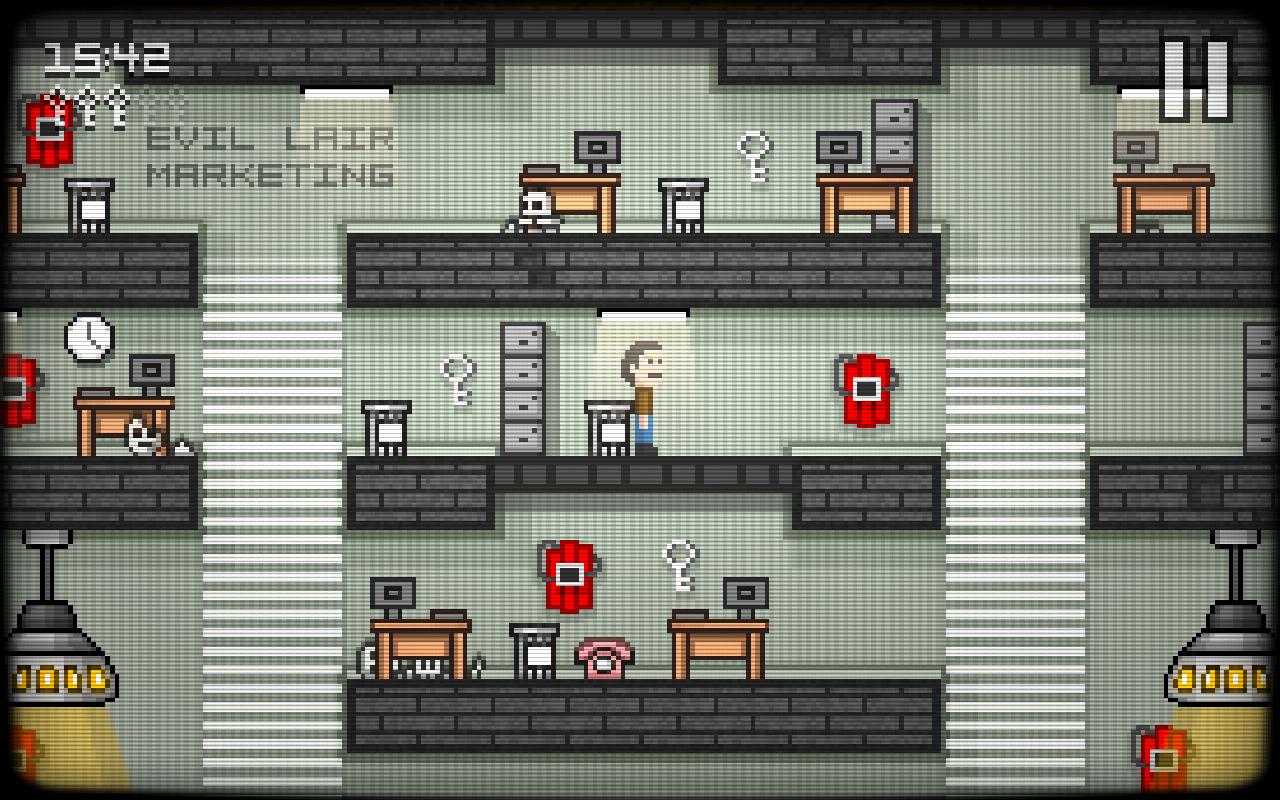 The story itself is basically, “What if we took Portal, made it a platformer, and then added enemies that were random objects?” Not even a joke that one. You fall into a test facility ran by an evil robot that killed all the people in it, and now it’s making you platform through the facility while it occasionally pops it’s eye in to have a quick chat. Not that that’s a bad thing, I love Portal, but that’s not really because of the story, just that it’s a damn good game.

One issue though is that this game is VERY short. I beat the game in 68 minutes, and I died a lot. When I beat the game, I’d taken a pretty long break before then, so I was about 50 minutes in when I said, “Alright, I’ll beat the game and finish this review up,” and when I opened the game I played for a short amount of time and then it was done. I can tell you why it’s so short though, because upon beating the game, I wasn’t even taken to the main menu before the game restarted. Win the game, walk on the surface for 3 seconds, back to the beginning of the game. See if you can beat your time. I can also say this because the game constantly has a timer on screen showing you how long you’ve been playing. The timer must have something up with it though, because when I beat the game it said I’d clocked in 360 minutes of game time, which is a nice 300 minutes off. 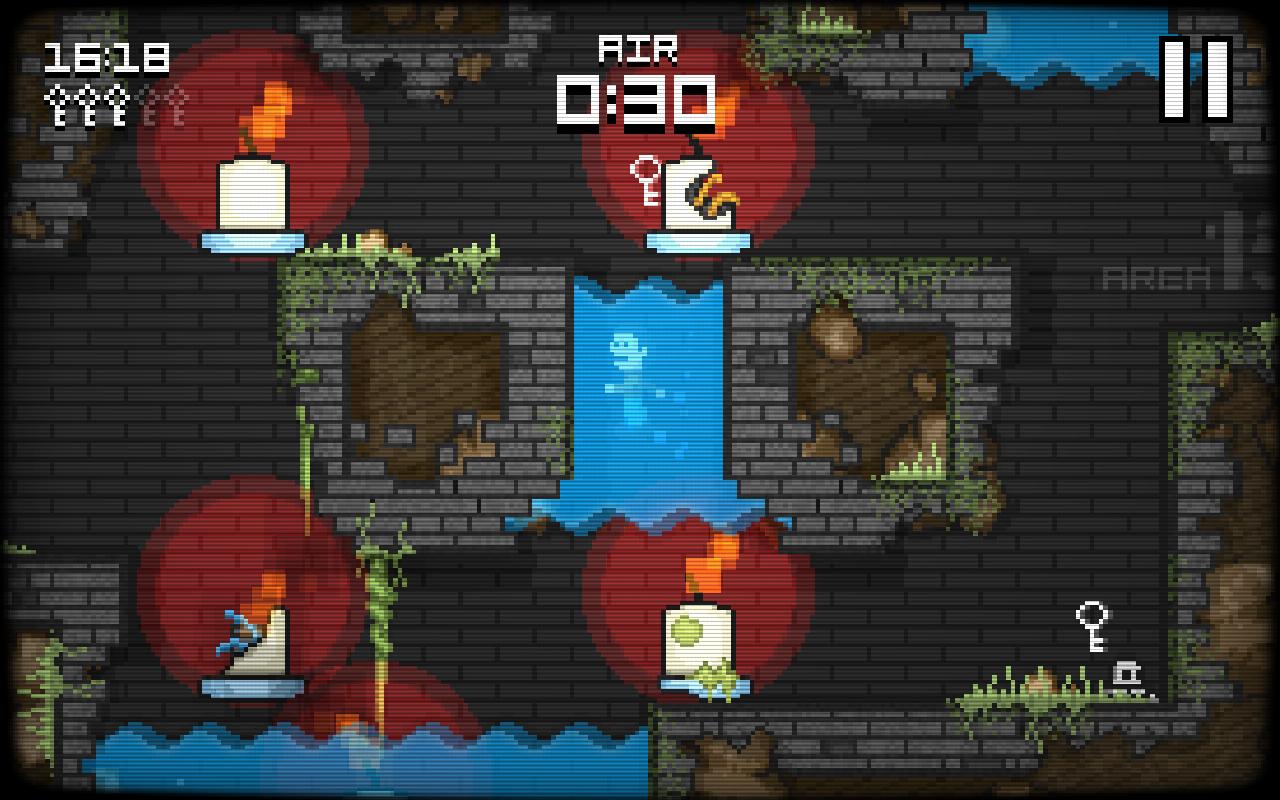 The graphics also aren’t anything special. Pixel graphics as is standard nowadays, although they are some pretty good pixel graphics. And if you’re wondering why I’m calling it pixel graphics and not 8-bit or 16-bit, it’s because I have no idea how you’d classify this one. The main character appears pretty 8-bit, but then the robot is very detailed. I don’t know, judge it for yourself, but I think it’s pretty alright.

The music in this game however, is VERY good. Music is what I’m most incompetent at describing, especially genre, so my apologies if this appears very barebones, but it’s also reminiscent of the NES/SNES/Older consoles era music. Like I said, awful with music, but know that the music is a strong point of this game.
In the end, Citadel 1986 is an average game with a few problems. Not a must-play, not an avoid at all costs. For the price of 2 dollars, I’d say you get your money’s worth.

REVIEW: Hindsight 20/20 – Wrath of the Raakshasa

REVIEW: Legend of Keepers: Return of the Goddess