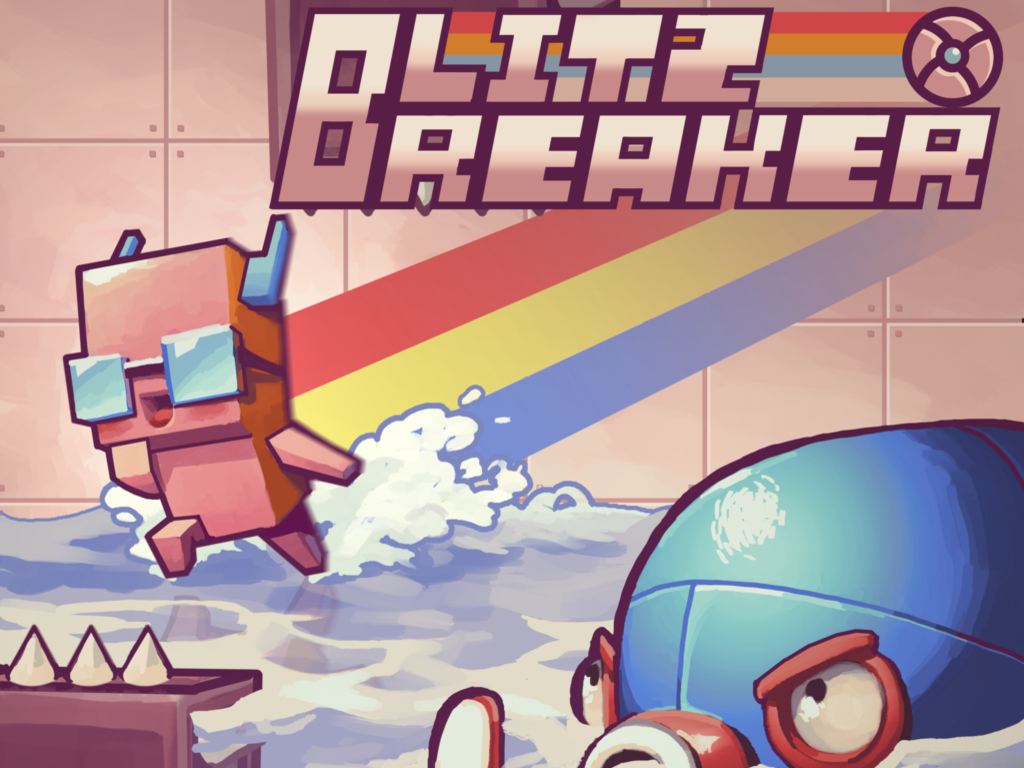 When discussing games of incredible difficulty or challenge, there are typically three schools of thought I subscribe to: Spelunky for roguelikes, Dark Souls for action/RPG, and Super Meat Boy for arcade-like, rapid fire levels. Blitz Breaker comes from the latter school; featuring levels that frequently take less than a minute or two to complete, are full of gimmicks that are introduced over time, and becomes the stuff of patience-testing nightmares near the end. While the controls are incredibly simple and easy to underestimate, the skill, tact and timing needed to execute successful runs through the levels is still quite impressive, even if the game has some bothersome elements that could’ve been avoided. 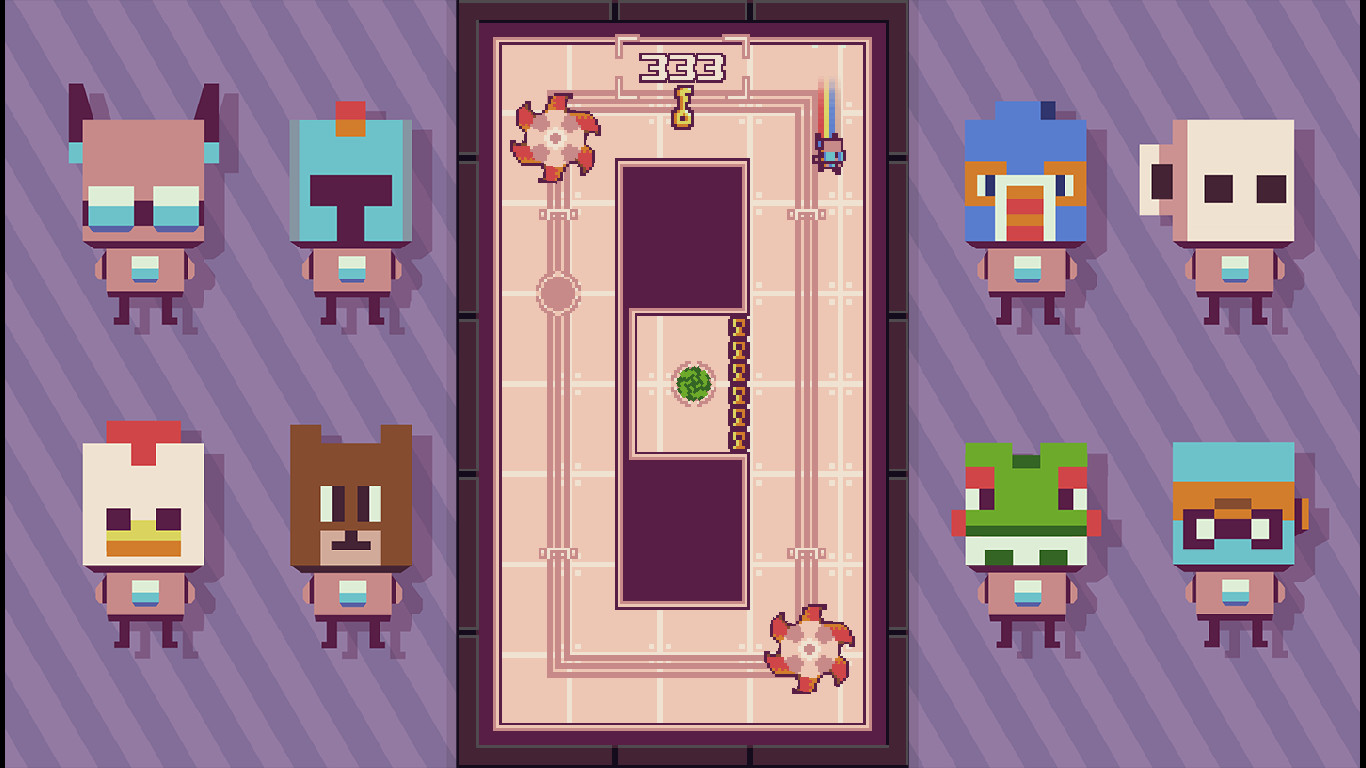 Your character cannot walk or run; the only methods of locomotion are a meager little jump, dashing in one of the four cardinal directions, and using parts of the environment, like by a magnetized platform or conveyor belts. The catch is that your character doesn’t stop dashing until they bump into a surface which, if the surface is a harmful one, then results in exploding death and returns you to the start of the level to try again. The levels and obstacles are all designed around this control scheme in compact levels that are quick to complete when you know the tricks. To be expected, the game is clever in unveiling new gimmicks (sawblades, cannons, keys etc) and starts off easy until they’re mashed together to really test your skill. These levels, or ‘worlds’, are punctuated by boss battles that are quite punishing, since a death restarts the entire fight from scratch. Levels have a par time and meeting this will reward you with stars, a collectible needed mainly for completionism, but which also unlocks different characters who have no purpose other than a visual one. Extra time towards the par can be gained by collecting coins throughout the level – Later on it feels like every coin must be grabbed to reach the par time unless speedy tricks are used to shave precious seconds. While the first twenty or so minutes will be a relative breeze, before long Blitz Breaker gets real mean and unfortunately rather irksome. 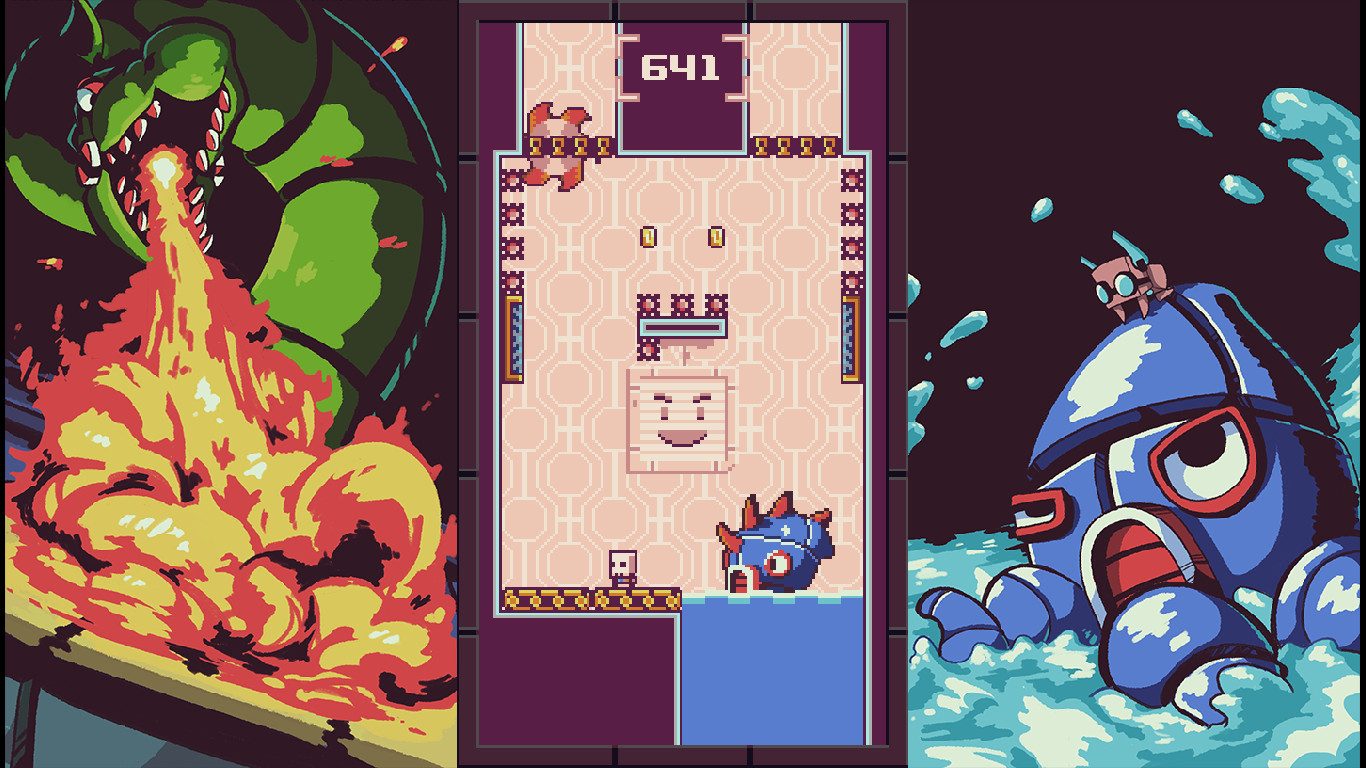 I’m not exclusively talking about the difficulty in terms of level design anymore, since that’s to be expected out of a game like this. Hitboxes interacting between your character and obstacles can be an iffy deal, since a handful of pixels brushing past a spike can result in some dubious deaths. This also is a problem when falling at terminal velocity and then dashing at the last moment; you’ll hear the sound effect of the dash being executed via your input, yet your character will still take a death regardless. It’s hard to tell if this is just the hitboxes not co-operating or if this is a proper bug that never got ironed out. The timer at the top of the screen obstructs the upper section of the level, and this can result in dashing headfirst into spikes hidden behind said timer if you’re not aware, which feels just downright silly. The game also does itself no favors by having a taunting message appear on screen after a death, resulting in annoyed jamming of the jump button in order to get by it as fast as possible and begin a fresh run. This makes fast restarts take a moment too long which can be a deal breaker for a game like this. 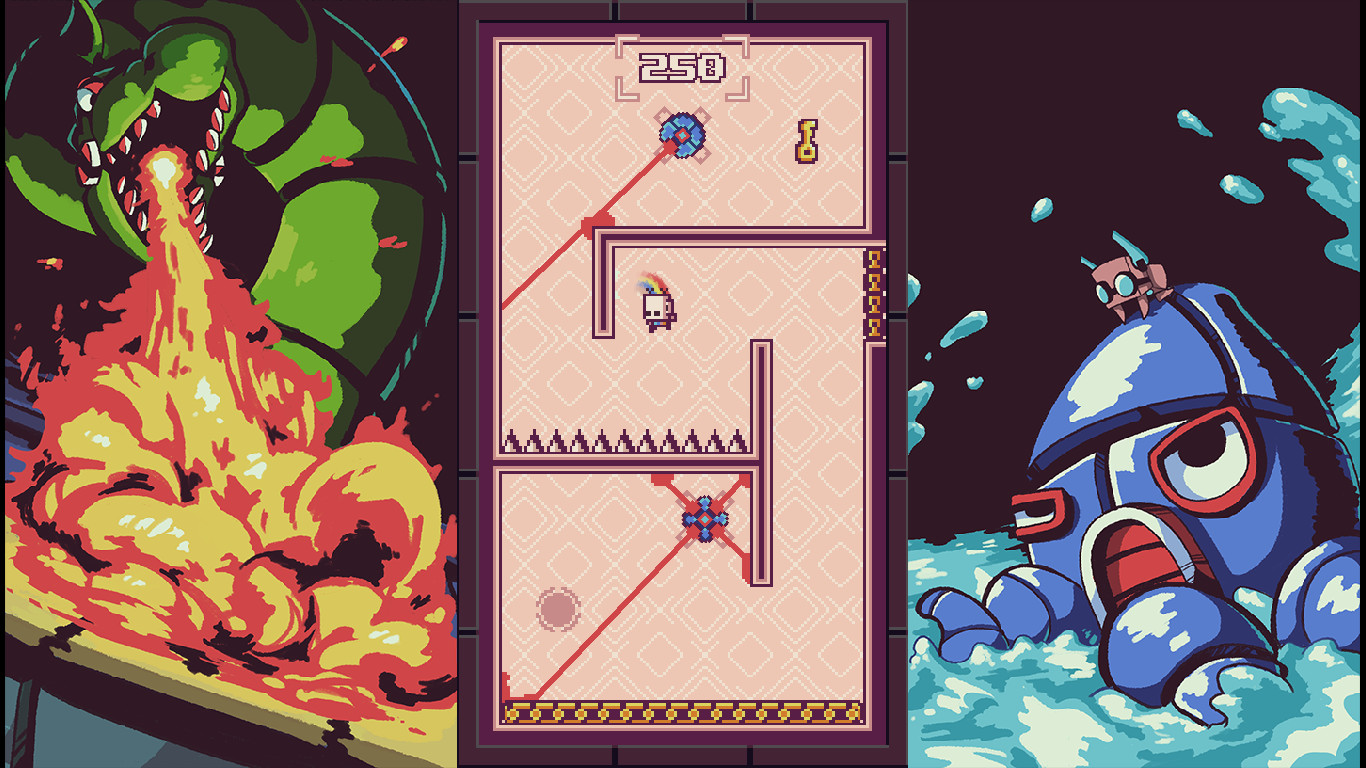 The biggest takeaway from Blitz Breaker of all comes not from a design quirk but from player input; in that you will try to dash around as fast as possible and make the same mistakes constantly. Even when there’s a spike wall to your left and a conveyer belt needs to carry you to the next platform, there will be that awful urge to dash that way to try to save time. I cannot count the number of times I’ve dashed straight into a spike wall after breaking a barricade and mashing the button to try and save time instead of just waiting for the correct and safe moment to continue. The game excels at preying upon player impatience, especially if you’re trying to go for every par time and collectible. This is both great game design and comically infuriating, and you’ll certainly have to train yourself to not just dash yourself to oblivion at every waking opportunity.
So even with some bothersome points that can effectively rob a successful run, Blitz Breaker is still a competent little title, with emphasis on little. The game is incredibly affordable and also short if you’re just trying to finish the game, but getting all the collectibles and par times is another story entirely, especially with them being scattered across an infinite-lived Story mode and an Arcade mode with finite lives. The difficulty may be off-putting for some, but for those looking for a new challenging platform in same veins as Super Meat Boy and the like, Blitz Breaker certainly can be recommended.