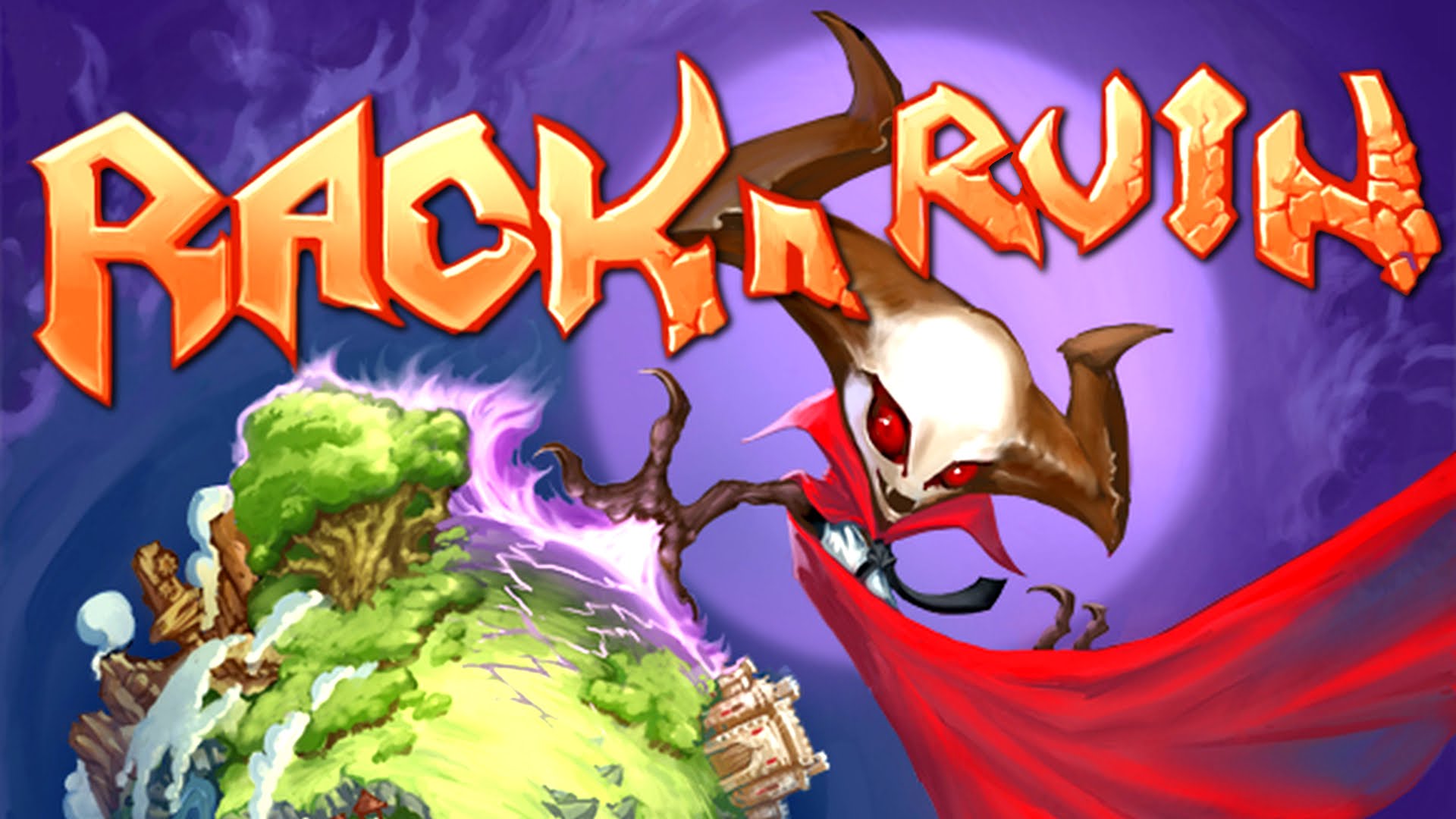 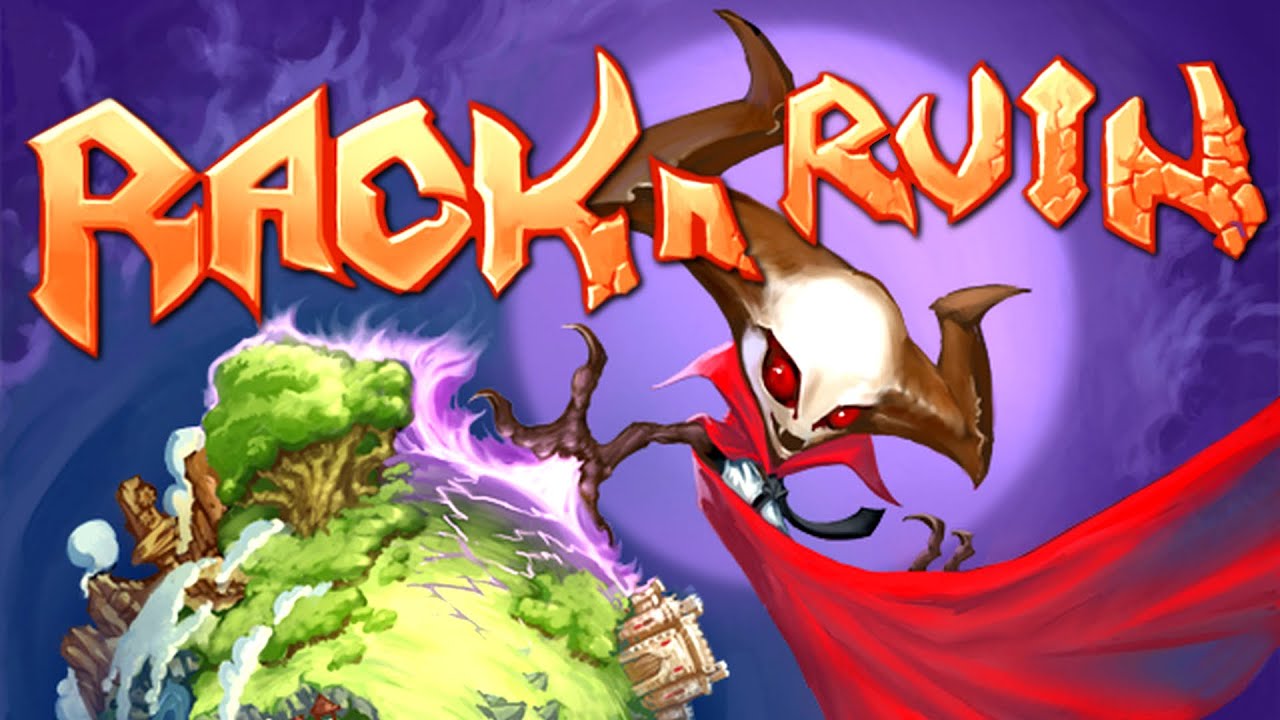 The game was released almost two months ago, but it came to the top of our review list just now, while Halloween time. Pretty good coincidence, because this game is full of Halloween monsters and costumes. So playing this game in Halloween spirit was perfect.

My first decision was to not contact the developers and publishers of the game, because I thought it was too childish and it just didn’t look like it had fun gameplay, but I have, how to say, a gaming motto: every game deserves a chance. I remembered that motto and I decided to reach out the developers.I can only say that I don’t regret at all that I contacted developers. 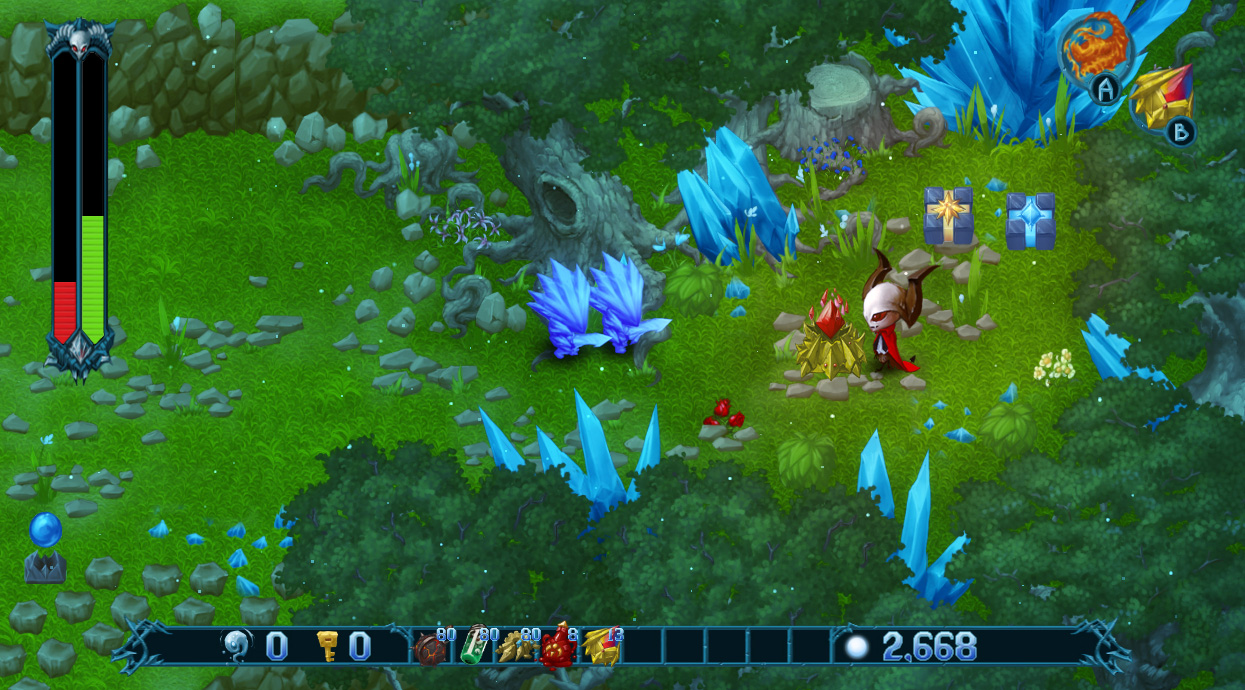 Rack N Ruin is a quite and surprisingly good game that has some problems which prevents this game from being one of better this year I’ve played and probably one of my favourites this year, but I always like to talk about good stuff at the start. It’s a top-down adventure game with a little bit of open-world element. Gameplay is fun, because you will kill a lot of different monsters, people and bosses with your fire (your first skill) as you progress on your quest to conquer the world. You play as a demon that has a last chance to prove himself to the Prince of Darkness or whats the name of his boss. In the beginning you have fireballs to shoot, but as you progress you get a melee weapon and so on. That makes game fun, interesting and never boring. One thing that is good that you need to use all of your skills, sometimes fire will be the best, sometimes electrical skill will be crucial. Beside skills and weapons you have numerous items to use. From standard health and mana/energy potions, turrets, smelly feet and many more. You will never be bored with this game, believe me. Even when you finish the main story, you will always be able to explore the Rack N Ruin world or you can do that while doing the main story, just to rest a little bit from fighting big bosses. Boss fights were fun and harder as you progress, if you even learn the pattern of the boss attacks, he will always surprise you, the length of boss fights will depend on your skills. 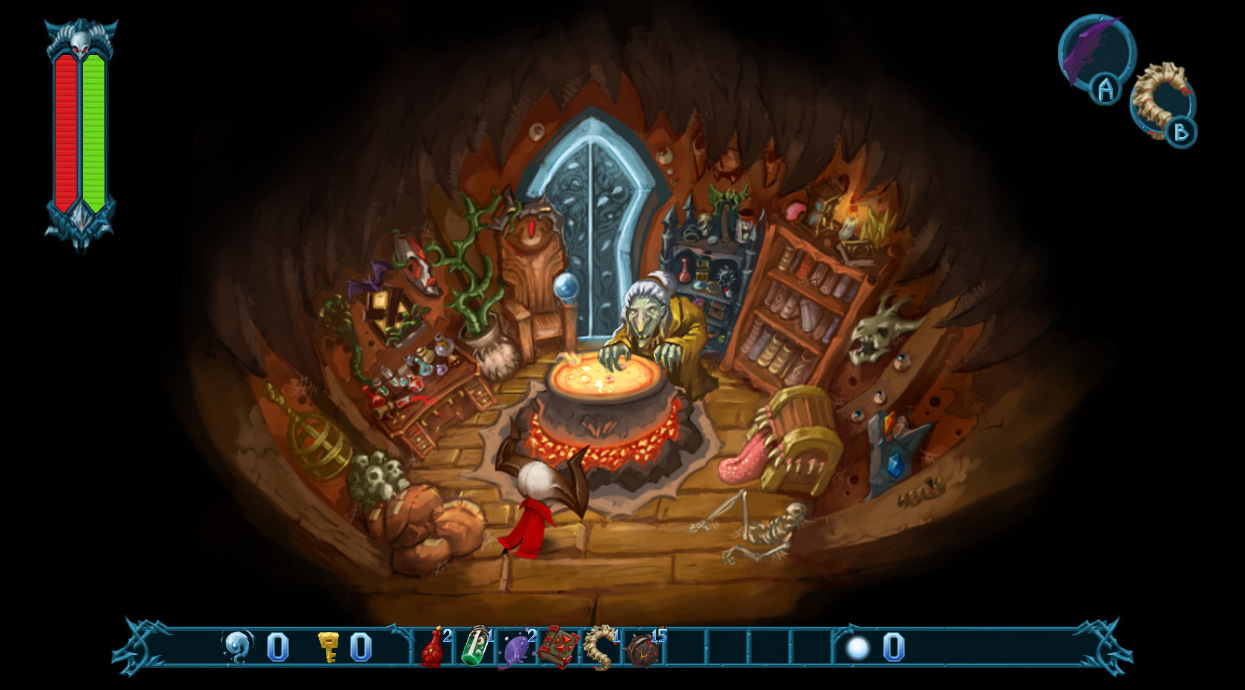 This is an adventure game, so it should have an interesting story. as I said you are the demon that has a last chance to prove himself. Your task is to conquer the world and that’s it. Maybe the description of the story isn’t so interesting, but there are some other things that are interesting and story-releated. Dialogs between characters are done in text-style, but characters can laugh or make some other sound, like our demon, he has very funny laugh. You’ll be laughing at his laugh and the game is full of sarcastic humor, so not everything is so dark in this game, especially because you are playing as a demon, a Demon. 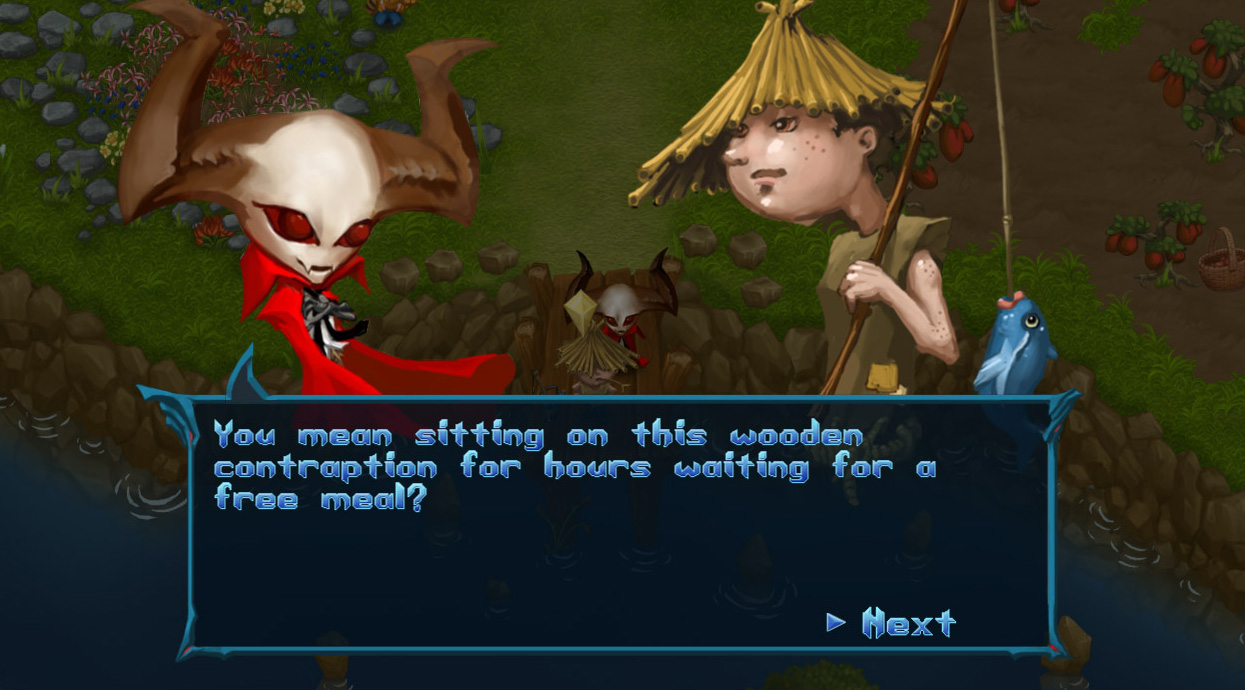 There are few problems that you will encounter on your way to conquer the world. It’s a normal thing to have a map in games like this and it’s even more normal to have a minimap so you can orientate easier, but Rack N Ruin doesn’t have minimap and it has very bad designed map. The map in Rack N Ruin looks like one big planet, like you are watching it from the space. The world is divided in few areas, every different from other. Game doesn’t track your position on the map and that can be tricky sometimes. I remember when I needed to find a secret cave and how I needed to go through a lot of caves to find a big pile of crystals and very often I needed to look at map just to see am I on the right path. It was very frustrating, first of all, because map is very bad designed and if the game is using hand-draw graphics (it looks like hand drawing graphics), then someone drew this map so bad. One other problem or frustration is no journey log. This game doesn’t have standard quest system, because it’s strictly linear game even though it has a little bit open-world element. In Rack N Ruin you can easily forget what is your next “quest” to do, but you just need to open map and see where you need to go and that’s it. When you come to that area, you are going to need enter some building in which you will probably need to solve some puzzles, which in this game aren’t hard and complicated, they just take a little bit more time to solve. For example, one puzzle took more time then I expected, because pieces of puzzle were scattered in few rooms. 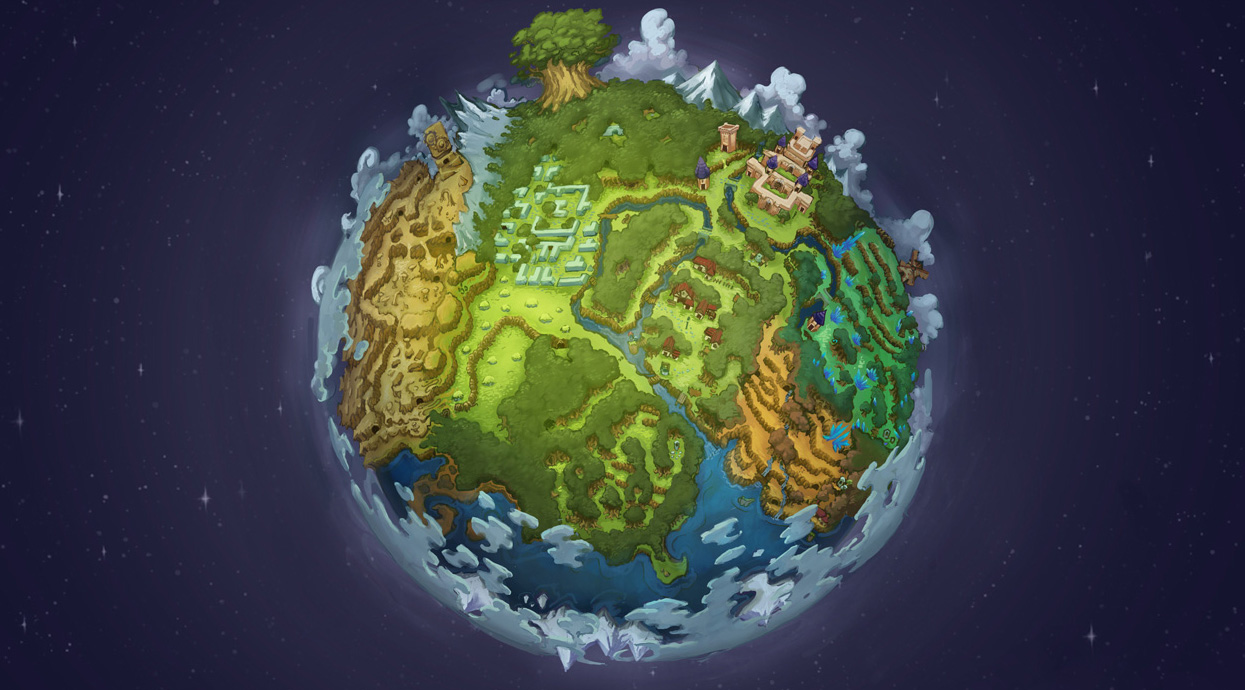 Things that I wrote in paragraph above aren’t really problems, they are more frustration that can get on your way and kill all the enjoyment you are having while playing the game. I even considered to give up from game and postpone the review, but in the end I somehow managed to overcome those “things” that were getting on my nerve and I really enjoyed the game and still enjoying. I even had a bug in the game and I don’t remember when was the last time I noticed a bug while I was reviewing game. Basically my character was stucked facing left, I was able to move and shoot, so that bug didn’t bother me really. I posted on the game’s forum and developer said it will be fixed. 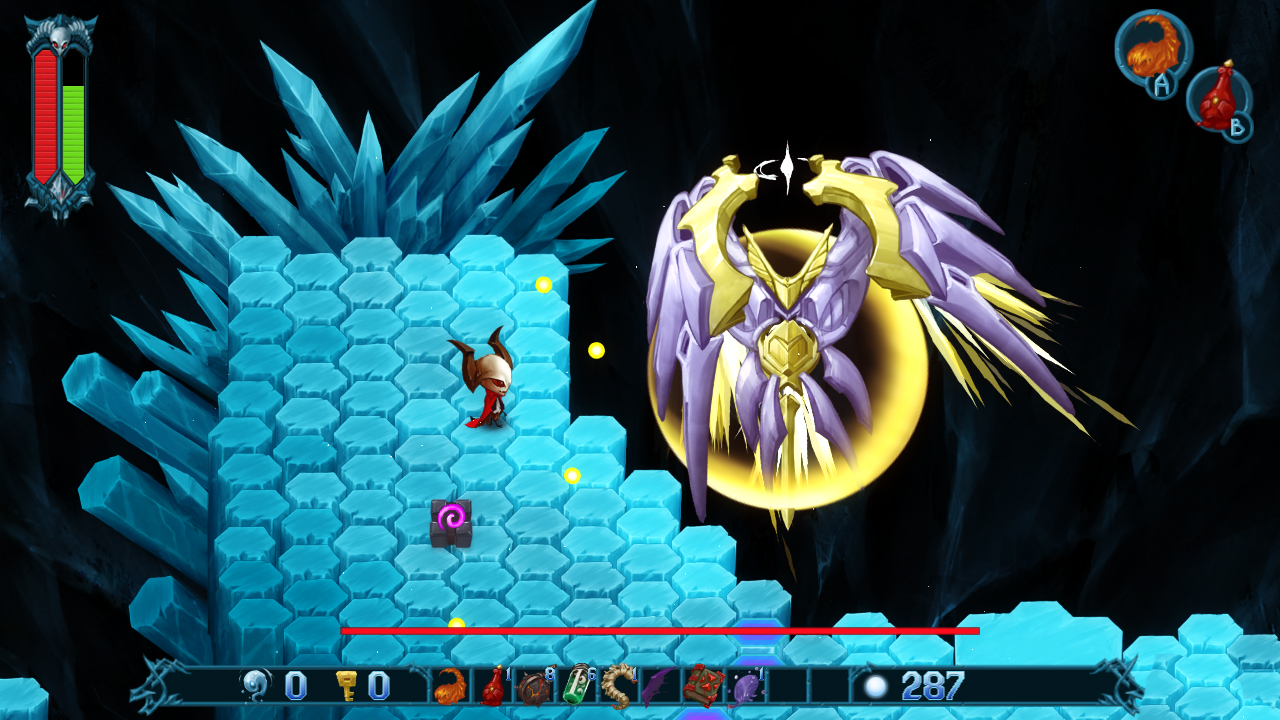 Controlling a little sarcastic demon on his journey to conquer the world in his last chance to prove him to the Prince of Darkness was utterly fun, interesting and I recommend most of the people to try and play Rack N Ruin. Maybe this game isn’t for everyone, but most of the people should try it, those with weak nerves shouldn’t play this game. Killing a lot of different enemies brought joy and a smile to my face and I am one of those persons who hardly expresses feelings .