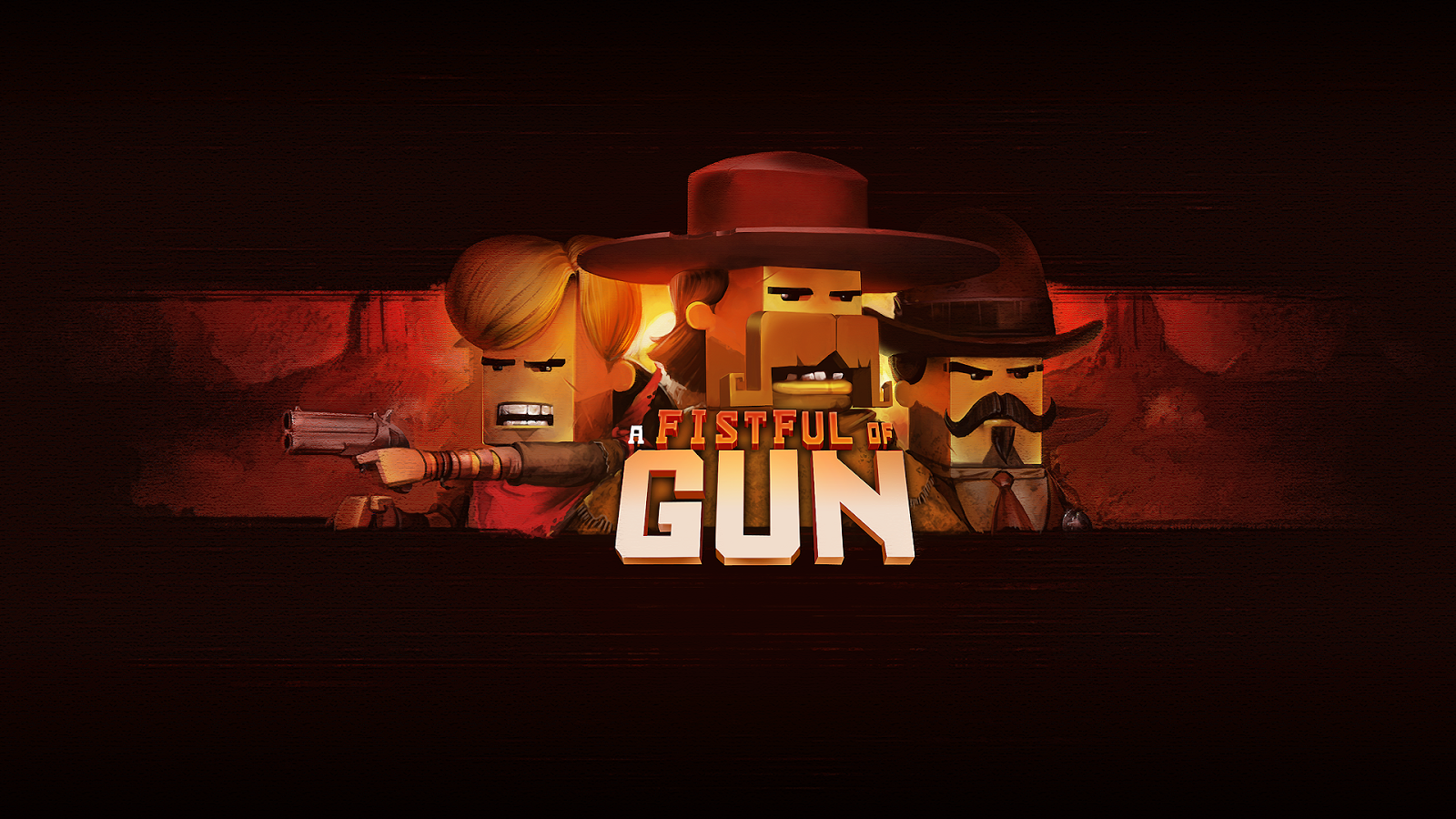 REVIEW: A Fistful of Gun

I was born far too late to remember the heyday of arcade gaming, which honestly makes me a little depressed. I never got to see the birth of games like Metal Slug, Street Fighter or Mortal Kombat. I can’t help but envy the people that did because they were right there, watching video games grow from something niche into what it is today: one of the highest grossing forms of media in history. Times change however, and the arcades of yore are long gone. The legendary games that once occupied arcades have moved on to PC and consoles, while the majority of games that you find in arcades today are, quite honestly, pretty bad. Aside from Time Crisis, I can’t sit in front of a lot of these games for hours trying to beat high scores like kids did in the Arcades of the 80’s and 90’s.

Thankfully, arcade games influenced by the old school have been making a comeback recently. Granted, you can’t play them within the capacity of an arcade anymore, but at least we have access to them on our computers. Just don’t try to lodge a coin into your pc when the game tells you to, no matter how immersed you are. That being said, it might be hard not to think you’re in a classic arcade when you’re playing Fistful of Gun. 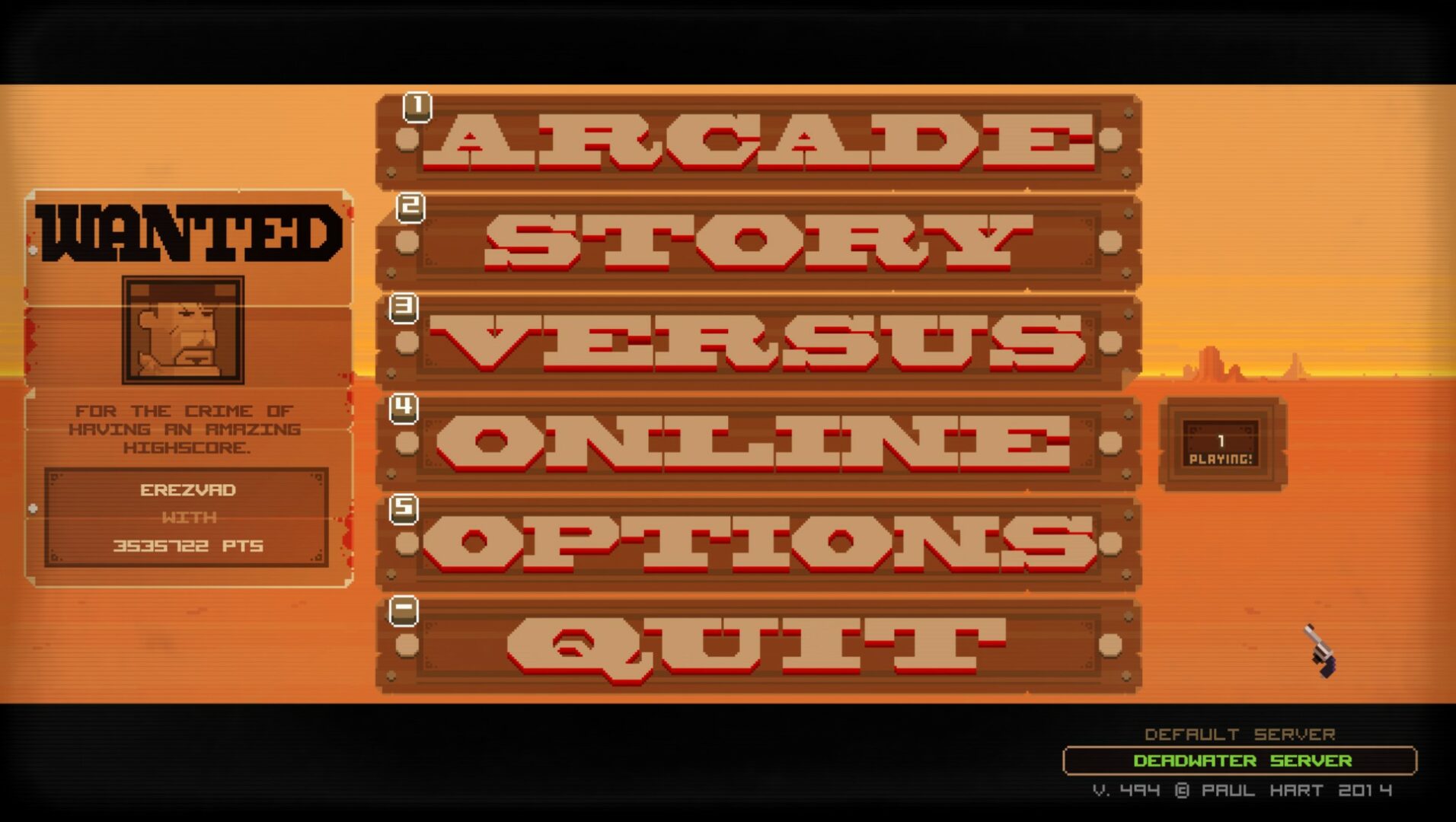 Upon launching Fistful of Gun, the first thing you’ll notice is just how awesome the game looks. It has a great art style and it’s pretty obvious where its influences lie. While I did enjoy most aspects of the game, I have to say that this is easily its strongest asset. From the character design, to the way the main menu looks, everything looks like it was taken straight out of the 80’s or 90’s. It’s also pretty obvious that the game takes a lot of its inspiration from spaghetti westerns (the game is called fistful of gun after all) and I really love the arcade take on the western theme. The game also has a great soundtrack. The 8-bit spaghetti western music is hilarious, but in typical old school style the music becomes thematically inconsistent; so expect to suddenly hear 80’s speed metal for no apparent reason.

From a gameplay perspective, Fistful of Gun is incredibly simple. You walk into a zone and get shot at by a whole bunch of guys that can kill you in one hit. You clear the zone and move on to the next one, doing the same thing you did before but at a harder difficulty and with multipliers that enhance your abilities. While the chaos eventually comes to an end in the story mode, you can keep going infinitely in Arcade. It’s a shoot em up; nothing more, nothing less. The truly intriguing part is the amount of characters you can choose to play as. There are 11 of them and, while you might be inclined to believe they’re all incredibly simple given the games premise, all of them play very differently and really give the game a lot of diversity in terms of playstyle. Some of them are harder than others, but all of them are fun to play as. 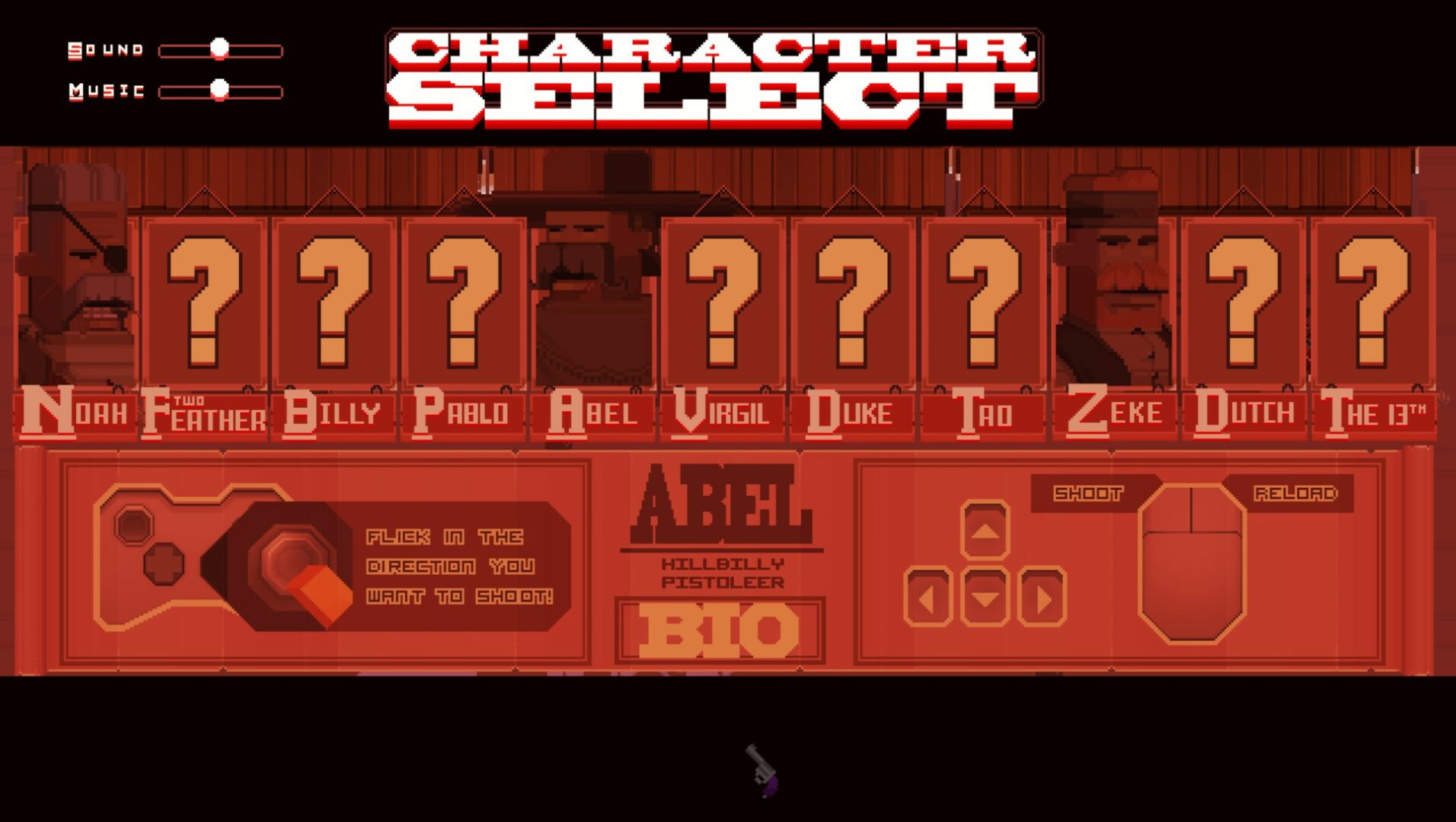 The game is difficult despite not being as hectic as Steredenn for instance, but it genuinely becomes a battle of skill once you start playing as a character which requires fast reaction times and muscle memory. One character I had trouble with in particular was Billy. With Billy, you have four different keys to press in order to shoot your weapon. When the bullet matches up with the key, you have to press it in order to fire. And once it’s fired, it will randomly change to a different key. The only way to keep up a steady rate of fire is to be quick on the draw. Now imagine how hard it becomes when you have dozens of insta-kill bullets flying towards you.

This gives the game a sense of competition, which is what arcade games were always about; you play them to compete with your friends. You instinctively want to pick your favorite hero, and duke it out to see who can live the longest and clear zones the fastest, while playing the same game together. And thankfully you can with the games co-op and online functions, both of which are pretty darn uncommon in shoot ‘em ups. 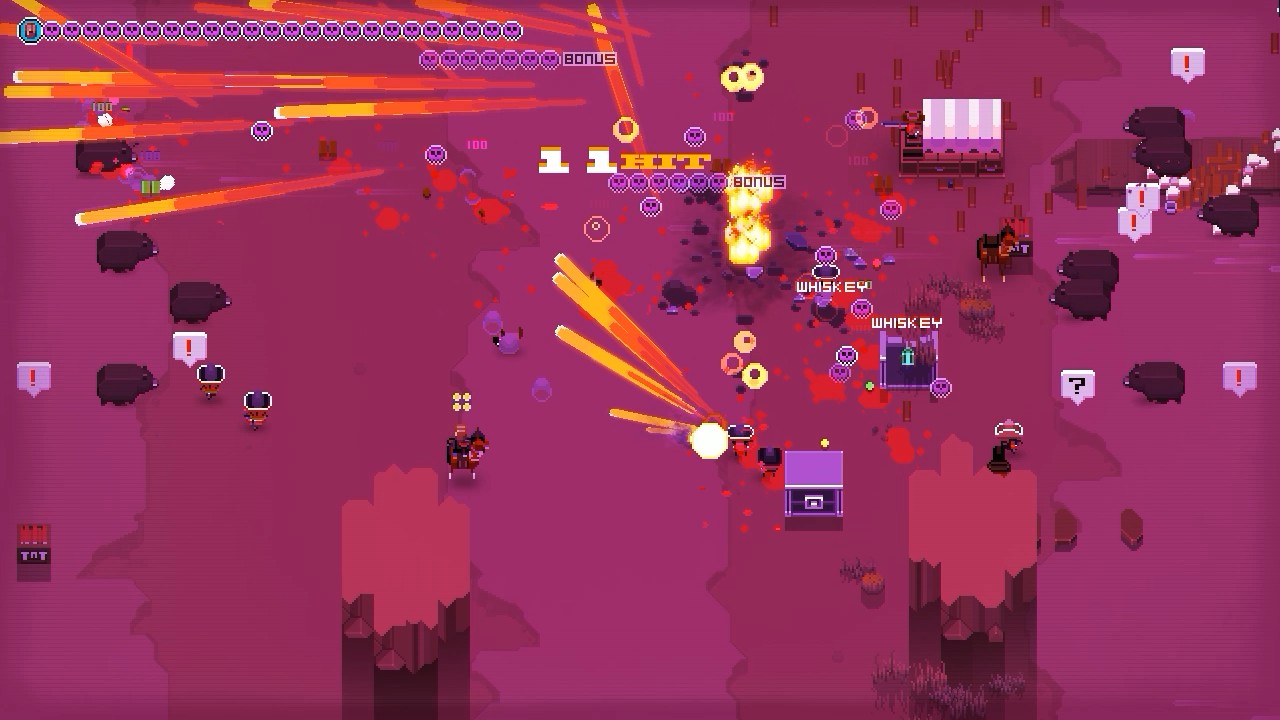 However, despite Fistful of Gun’s incredible presentation and adherence to the old school, it’s unable to fulfill its potential as a competitive game. If you have friends who own the game, then you should be able to play the game as it was intended; but if you don’t, you have to rely on the online functionality. Sadly, you’ll be lucky if you find even 1 person playing online. This isn’t a fault of the game obviously; a lot of low-key indie games have small communities given how little coverage they get, but it’s still a shame to see such a fun game going unplayed. The game does function well enough on its own, but the fact the it has a co-op function and an online mode means the game pretty much begs you to play it with other people. Arcade games were built around playing with other human beings. They are essentially a microcosm of an arcade itself. Take Lethal League for instance. The game has a small, but very devoted player base that play the game competitively among each other. The moment you take away that interaction, you’re essentially playing a hyped up version of ping-pong against a computer. While the same can’t really be said about Fistful of Gun, it should put into perspective the true nature behind arcade games.

Fistful of Gun is a simple game with incredible presentation, that any fans of the shoot ’em up genre will enjoy. Just don’t expect to play the game competitively unless you can convince your friends to buy the game, or if you’re generous enough to buy it for them. However, if you’re the type of person that likes to better themselves through constantly improving on their high score, then you should be fine with playing by yourself.