They say fish is brain food, and you may not be using yours if you skip this Metroidvania.

Metroidvania games are in an odd place when it comes to indies. They’re not necessarily the most ambitious project for a smaller team, but they do take enough care and have a specific enough audience that people tend to have higher standards for them. So you tend to see games of that type have some kind of unique hook to set them apart, and a surprising amount of Metroidvania have done this by setting themselves underwater. It makes sense when you think about it, though, as there are plenty of environments, obstacles and set-pieces you could encounter in the ocean, and by not involving platforming at all you can make something a bit more unique. One of the first indies on Steam period, Aquaria, did this to some acclaim, and here we have a new game seeking to do the same, Pronty: Fishy Adventure.

When Swimming, Always Bring a Buddy

As the name suggests, you play as Pronty – well, a Pronty to be precise: a series of genetically-engineered creatures made to protect people living underwater in futuristic colonies from all manner of mutated sea-life, ranging from the wacky to the outright horrifying. The story begins with this Pronty catching a glimpse of the absolute latter, a leviathan known as the Rakshasha, which destroys your home outpost and makes for a populated area. It’s definitely a game where the cutesy protagonist is in direct contrast to the story they’re the lead of.

Since Pronty is a sea creature he definitely doesn’t control like a platforming lead, and I imagine the people reading this review will all end up having a different image of how a character like that might control. I’m thankful to say there’s no complex physics or inputs to worry about; if you hit right Pronty will move until you stop, and he can travel in any direction seamlessly. I’ve never felt like I took damage when I shouldn’t controlling him, and he moves at a quick enough pace backtracking isn’t too bad, especially since you quickly learn a dash move. 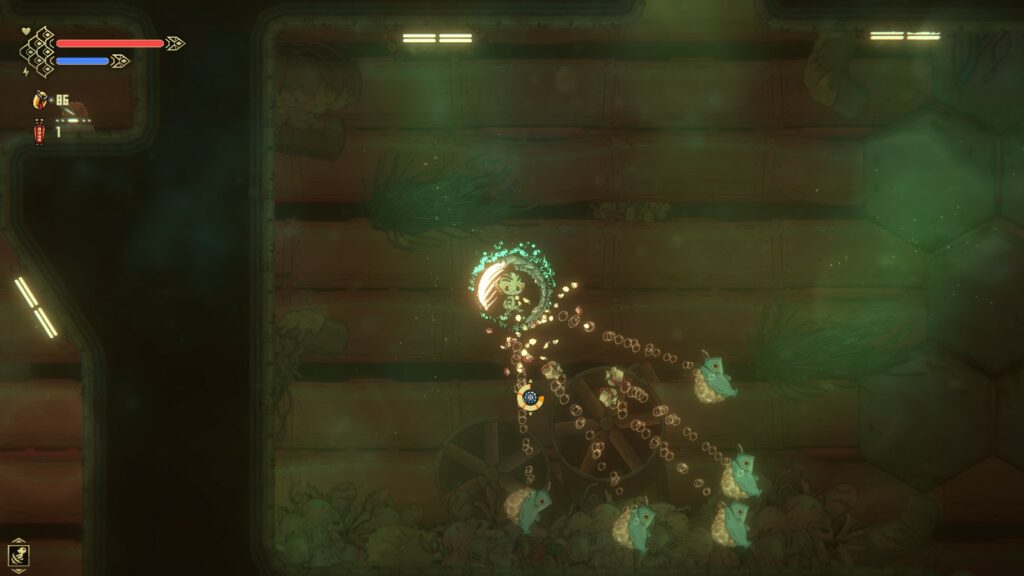 Combat is where the game gets more unique. Pronty has an equally artificial partner called Bronty, kind of a cross between a swordfish and a harpoon. He follows you around naturally, and for attacking enemies you target them with the mouse (or the other stick on a controller, I imagine), press the button, and he’ll ram into them. This is interesting as Bronty will keep attacking targets as long as you’re aiming at them and hitting the button, letting you divide your concentration a bit more toward avoiding attacks, which in turn means enemies and bosses can do more complex things. A mechanic introduced early on incentivizes you to do some bold dodges, as dashing past an enemy will mark them, causing the next attack to deal more damage among other possible effects. Bronty gains more moves throughout the game as well, among them spinning around Pronty to defend from projectiles and having a charged power shot. It can feel a bit simple at times, since dodging past things to mark them is a pretty effective strategy and not difficult to do, but I had fun with it.

As you explore you’ll come across the usual Metroidvania upgrades. Heart and Stamina containers are found throughout the game, with the twist that they’re linked to the same collectible: finding three gives you the option of upgrading either. Stamina is used for Pronty’s special moves, primarily Dashing, so it’s up to each player whether they want to prioritize one over the other. The same holds true for the other upgrade items, which give you a choice of whether to increase Bronty’s damage or his heat capacity. Heat is his equivalent of stamina, and doing certain actions with him without pausing will eventually make him overheat and be unusable for a time. 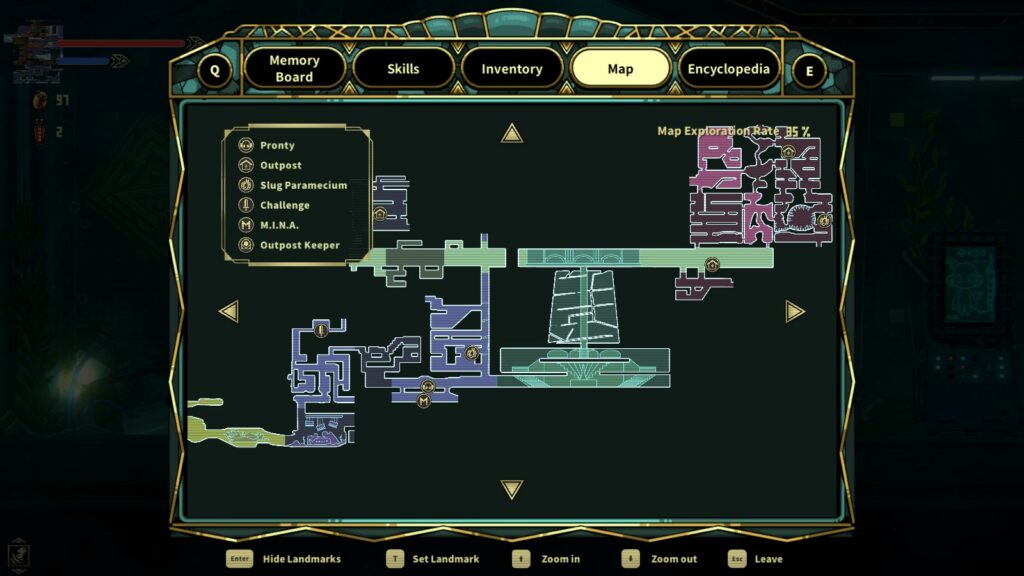 Graphically the game looks quite nice. With a game based on the ocean there’s a lot of variety available, and there’s a lot of it used here. You start in a stretch of underwater caves that are a normal-enough initial area, before soon reaching your destination of the city and encountering environments that are a blend of natural and artificial. There are a lot of nice details in the backgrounds and the actual sprites for your duo and the enemies they fight are well-done too. Special mention goes to the bosses, which have all looked unique and imposing.

I’ve only found a couple nitpicks so far with the game. The localization feels a bit off in places, with weird dialogue and a bunch of text that wasn’t formatted perfectly. For the actual gameplay, one thing that’s annoyed me on occasion is Bront getting stuck – he’s a unique entity from Pronty, and while he can’t be damaged he can be affected by currents or stuck behind doors. There’s an easy command to warp him back to you and him moving separately is important for some mechanics, but there’s also been a few times where I’ve entered a room with a bunch of enemies and realized he’s hung up on terrain a while back, which is distracting enough to take damage or worse because of. Again, a minor thing, because dying simply sets you back to the last checkpoint, which are plentiful. In general it’s not been too hard a game either, it definitely gives you enough tools to deal with challenges. 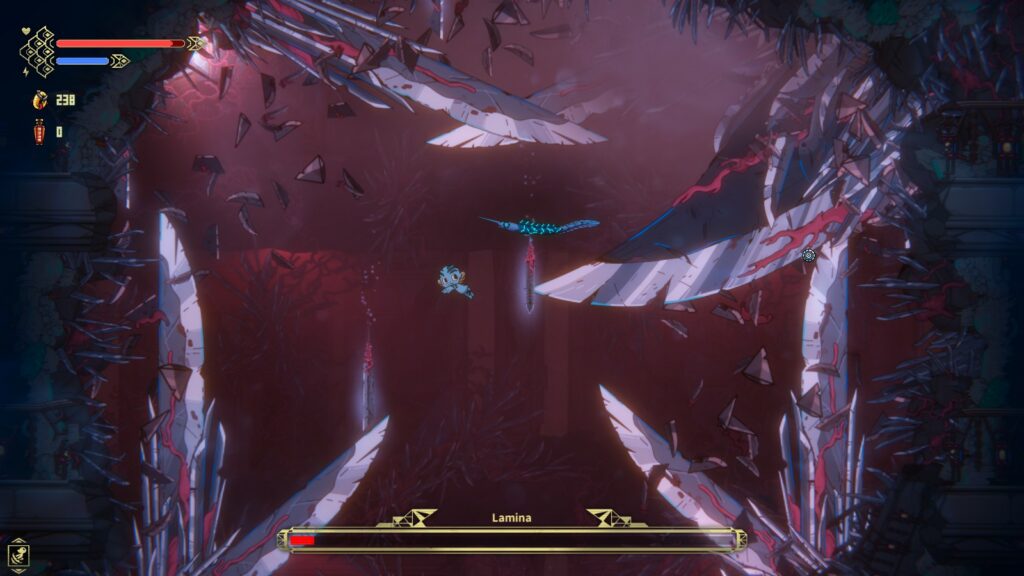 I wasn’t quite sure what to expect with Pronty, but I found it unique and fresh to play compared to the other Metroidvanias I’ve played recently. It isn’t the only game of its kind, but easily does enough to justify itself, especially considering it’s an early game from both the developers involved. I don’t hesitate to give it a Save.