Ruvato: Original Complex is a hack and slash game with a unique mechanic. Your attack power will increase based on the number of enemies that you defeated, making it easy to defeat more powerful enemies later on. The game offers 102+5 levels in total with varying mechanics and boss fights.

What excels at this game’s visuals is its interface – the main menu, cutscene, and even the screen that happened after you finished each level looks neat with all the simplicity. The main menu looks clean with the white color while still making it look attractive with images and animation. Although the in-game models might look like porcelain dolls at first glance, the cutscene portraits look smooth and nice to look at with effects and lighting.

The story is focused on a sci-fi setting where androids and brain transfers are a thing. Dialogues mostly revolve around you, the main character, that is looking for a log of a researcher to find out the background of the main plot. It was interesting to see the concept that the game has in mind of the topic, and if you are not interested in that, the story also has a bit of heartwarming element with the characters. The dialogues are flowing smoothly and are written in such a way that makes it easy to understand, even to those who didn’t know about the topic. However, it can be hard to focus reading the text since the camera keeps on moving on cutscenes. 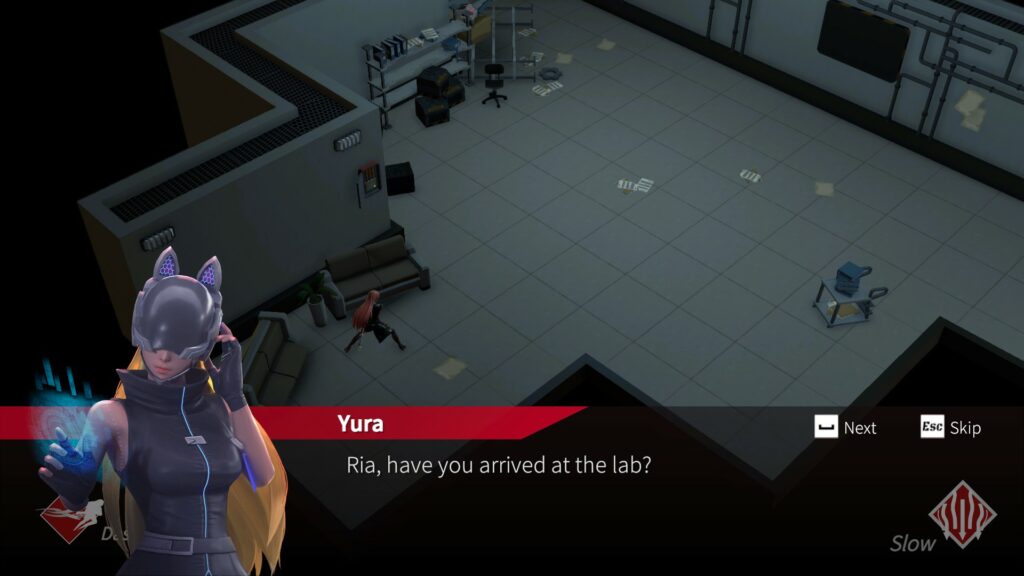 The game is a fast-paced hack and slash where you need to kill all enemies on the level to continue. The thing is, your attack power will be increased by one for every enemy that you kill, which makes fighting easier as time goes. However, standing still for a long time without hitting an enemy will make you lose this damage increase, so you must keep on moving and slay the enemies on your way as fast as you can. Your score will be calculated at the end of the level and you will be ranked based on how fast you are clearing it. Each level doesn’t take longer than 1 minute, save for the very last level.

Your hand-eye coordination will be tested in this game. Since your damage starts with 1, it’s unwise to attack an enemy with 10+ HP when there is one with 4 HP on sight. This makes you prioritize which enemies to kill first, whether it’s because of their low HP or annoying attack. You can also block or dash to defend yourself against enemies’ attacks to make sure you don’t get killed. Since you only have 1-3 HP, which depends on the difficulty that you select, you must be careful not to get hit too much. 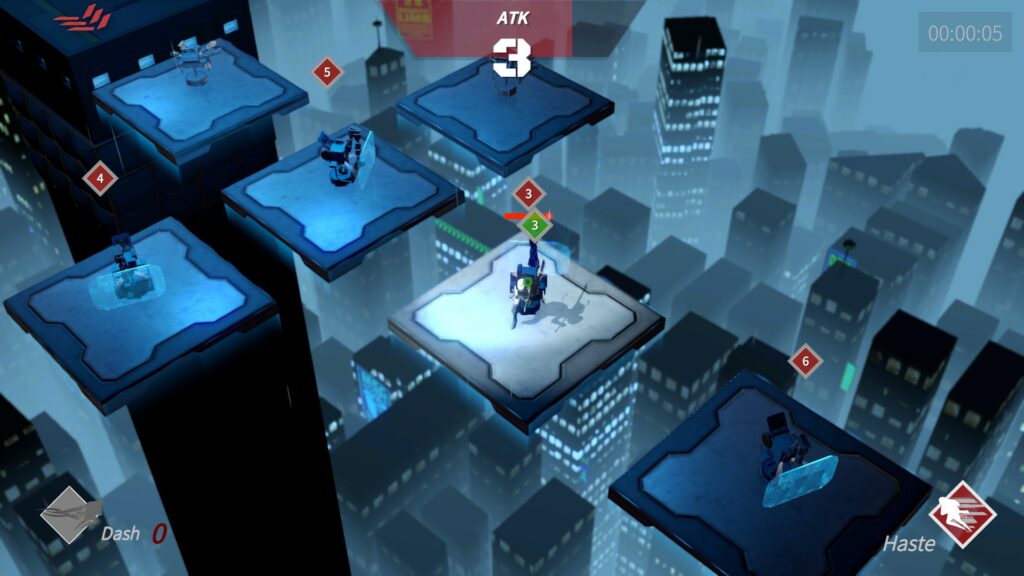 It’s hard to move your character around. The game also has platforming sections where you need to dash to avoid obstacles, whether it’s a pit or lasers. However, since the game doesn’t have a tile-based movement, it’s hard to predict where your dash will end up, making it easy to die because of a foolish mistake. In fact, I still didn’t know how to finish one of the sections in a level without getting hit because of this. Moreover, your dashes have a cooldown, so you must make sure that you have a few of them before proceeding.

Skills help to give some leeway in finishing the level. Eight skills are available to purchase and upgrade, which can help you in finishing the levels. However, switching between them midway is almost impossible to do since the timer will keep on running when you do that. You can finish the levels by using one skill, but I can see how having more than one in some levels can help to finish the level faster. 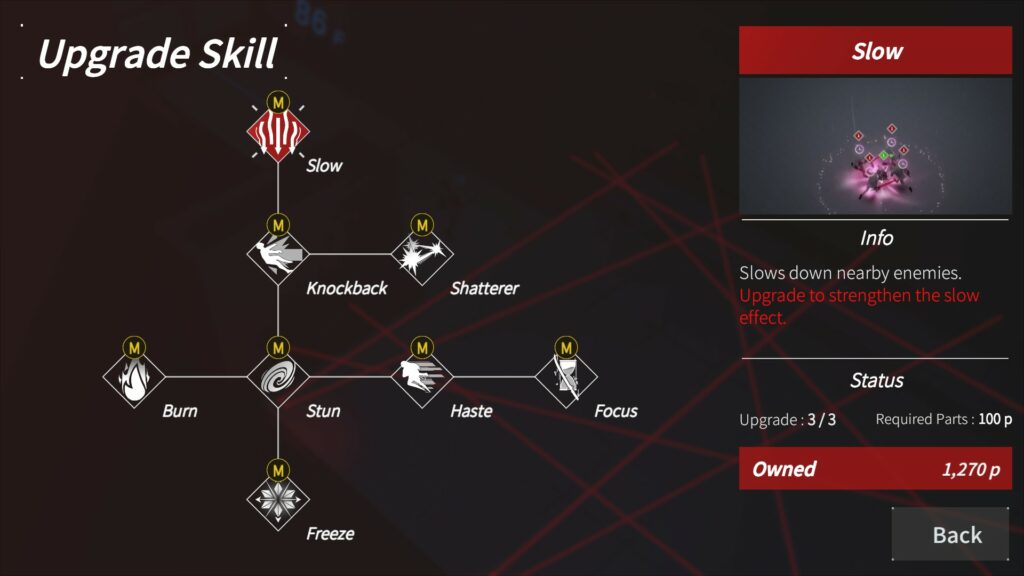 More mechanics will be introduced later on, making the game more interesting or annoying. I liked levels that require me to kill enemies in a certain order to continue, but the levels that require me to block an attack several times are kinda boring. There is one level where I had to sit still to parry an enemy’s attack ~18 times before I can finish the level and another where I had to remember the platforms’ position before I could move on. The thing is, you need to block right when the enemy is attacking to parry – you need to develop muscle memory for these levels.

Some tutorials are introduced too fast. All mechanics will be explained at the first few levels to let you know how the game works. However, some mechanics, namely the parry and breaking the enemies’ defense while they are stunned, never matter until the last few stages. I didn’t aware that those mechanics exist in the game and got stuck for a long time because of it. 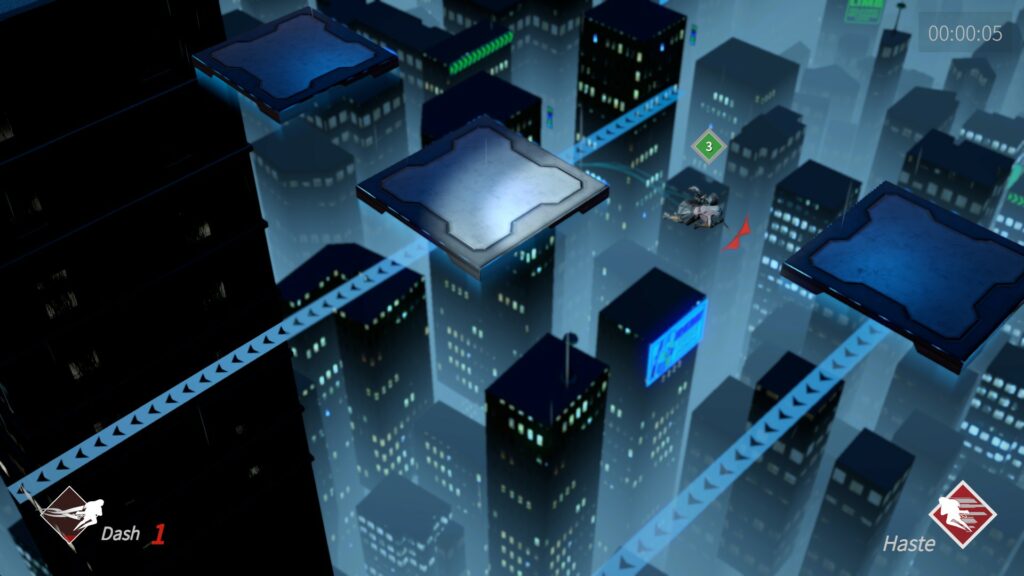 Boss fights feel redundant. There are 5 boss fights in total that are accessible at the end of each stage. However, they can be defeated in the same way. It’s also hard to know whenever they are attacking since their models are very small.

I finished the game in 6.4h. I played the game in “normal” difficulty at first before I switched to “easy” at around the second stage. There are 5 stages in total with ~20 levels and a boss fight each. The easier difficulty helps if you want to get all levels in A rank for achievement, especially since you get more HP and have to deal with slower enemies. The game is still challenging to beat even at the easiest difficulty because of the platforming sections and parry mechanic.

I have a love and hate relationship with Ruvato: Original Complex. On one side, I liked the game concept, slashing everything in my way to gain higher damage. However, I loathe the platforming sections. All of them. It’s easy to die because of a foolish mistake, whether you didn’t time your dash properly or the moving platforms that don’t come your way when you dashed to a certain spot. I was frustrated whenever I failed because of them, but strangely, I couldn’t stop playing. There is always that thought that wants me to play one more level before stopping. However, since the game is only ~6h long, the original price might be too expensive for the playtime it offers, so I suggest buying the game on a sale instead, and that’s if you don’t mind stressing yourself over numerous deaths.