Monster Crown is a decent monster taming game that is focused on breeding which is not tested enough for the full release.

Monster Crown is a monster-taming RPG with breeding at its core. It offers an open-world area, allowing you to visit the towns in any order that you want to find as many monsters possible for your breeding purposes.

The game uses pixelated visuals, albeit with a little twist. Monsters have a similar style to Game Boy Color visuals with the minimal color and the frequent use of white. However, the rest of the game is portrayed in full color, with some trees having a slightly different contrast sometimes. I believe the difference was caused by several graphical changes since the early access version, but it still makes the visual look inconsistent regardless.

The lack of proper build-up makes the story loses its value. The only thing that I got from it is what happened in the past, years before the main character was born. I don’t know the motive of the main antagonist, nor the reason for everything that happened in the game. There seem to be some hints of them in places you explored, but since it doesn’t point to the said character, I couldn’t be sure if they are referring to the same person. On the good side, the game has two endings, and I liked the twist that the bad ending has.

The post-game story is just too vague. I’m not sure if both endings have the same story, but the one that I got gives some sort of premises of an adventure, only to be shot down on what happens afterward. I couldn’t understand the correlation of what the enemies are saying to the plot, and the story just ends without any explanation.

The game is played similar to Pokémon games with an open-world area. This means that you are free to explore the whole region in any order that you want regardless of your monster level and story progression. However, some areas have high-leveled monsters, forcing you to either grind or follow the story progression at the beginning. You can increase the level cap of your monsters by beating the chief tamers located in each town, but strangely, they are way easier to beat compared to the wild monsters.

Monsters don’t have the same base stats due to how breeding works. You are bound to meet monsters that can be too strong to beat, whether it’s because of the level gap or stat. It’s easy to meet a level 30 boss in the first few minutes of the game, and the monster in the next town can wipe your party easily if you are not careful. Luckily, you can always out level the enemies in the wild to have a 100% chance of capturing them. This doesn’t come without a tradeoff though. Since you are bound to replace your monsters as you progress, you also need to level them up each time before they can contribute to your party. 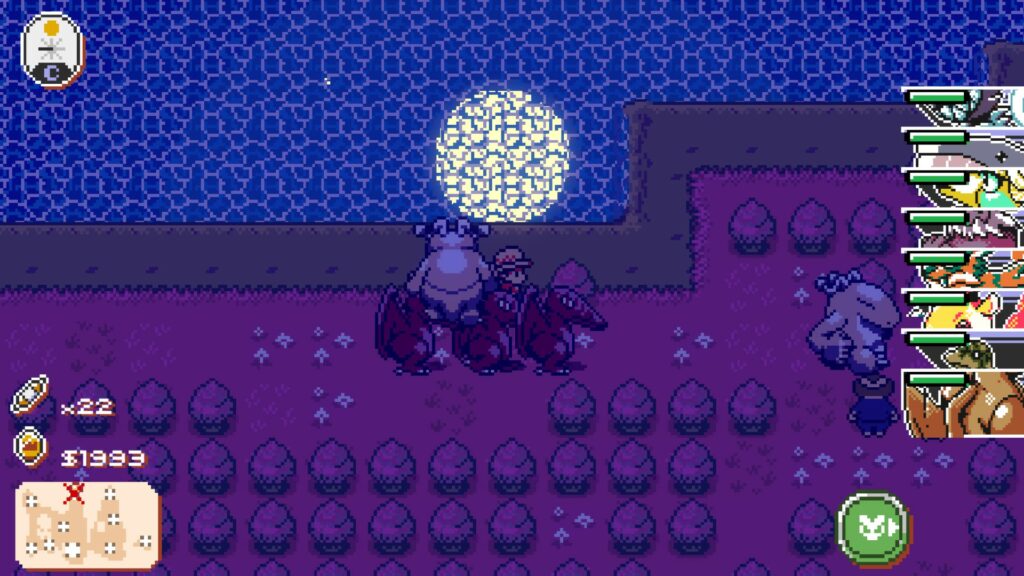 As a game that relies on exploration, it’s easy to get lost. Unlike Pokémon, areas are very vast with a lot of trees surrounding them. While I don’t mind exploring these kinds of places, the post-game area doesn’t seem to be polished enough. A lot of areas are empty and look weird with the “sprite glitches”. It feels as if the areas weren’t expected to be explored at all.

It can be confusing to progress the story. Although your goal is quite straightforward in the beginning, the post-game content is way too vague. There is no information on what you are supposed to do, and once you reached the new region, you are forced to explore everything with little information on where to go. Moreover, backtracking to the town can be time-consuming if you don’t know what you are supposed to do.

One dungeon can give trouble to some people. It relies on a feature that was never fully explained in the game. Some skills will appear out of nowhere to help you solve some puzzles, and there is no way of knowing about it unless if you stumble upon them by accident. 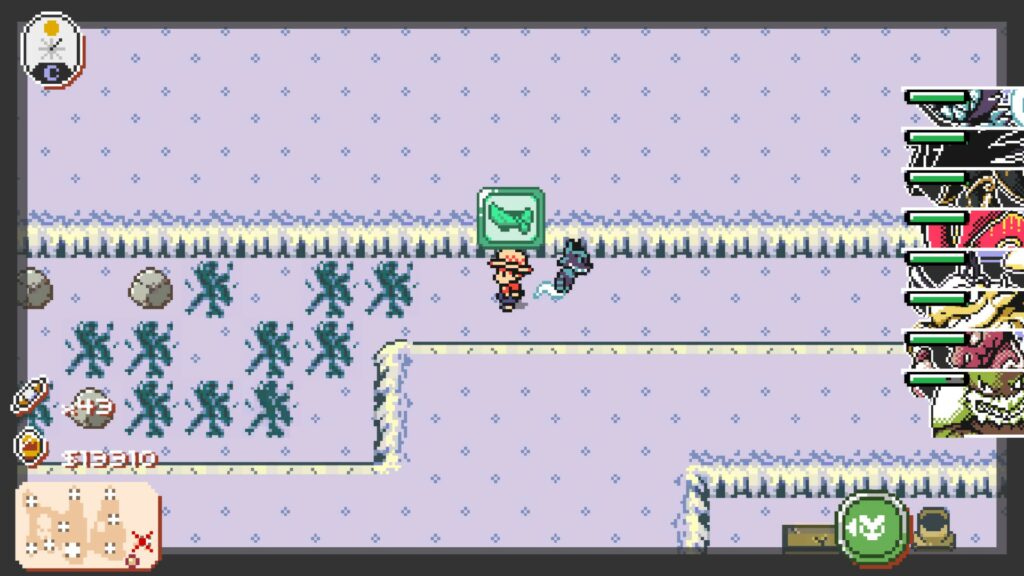 Breeding, the main focus of the game, is handled well. There are a lot of features that let you change the monster to whatever that you want, whether it’s their stat, appearance, or color. By default, breeding two monsters of a different species will create offspring with the base monster of the primary parent and the color of the secondary parent, with a twist in its appearance. Each monster has a different appearance based on their types, so you are bound to have different-looking monsters if you change one of the parents. Since stat is also transferred, you also can utilize it to create the best party that you want.

The functionality of the breeding feature might be limited at the beginning, but it will change as you progress. There will be a feature to forget the skills of a monster, along with a facility to change the breeding formula. At the end of the day, you can use any monsters that you like after spending some time breeding. It took me several tries to get the monster that I want, but I don’t regret it at all. It was fun tinkering around the breeding system to get the most out of it.

Monster types are hard to remember. Monster Crown uses unconventional types such as Malicious, Brute, and others. I don’t even remember which is which until now. I played the game with a screenshot of the weakness and resistance chart on my phone at first, and once I breed monsters that have all skill types, I end up relying on the game feature that lets me know if a skill is effective to the enemy. 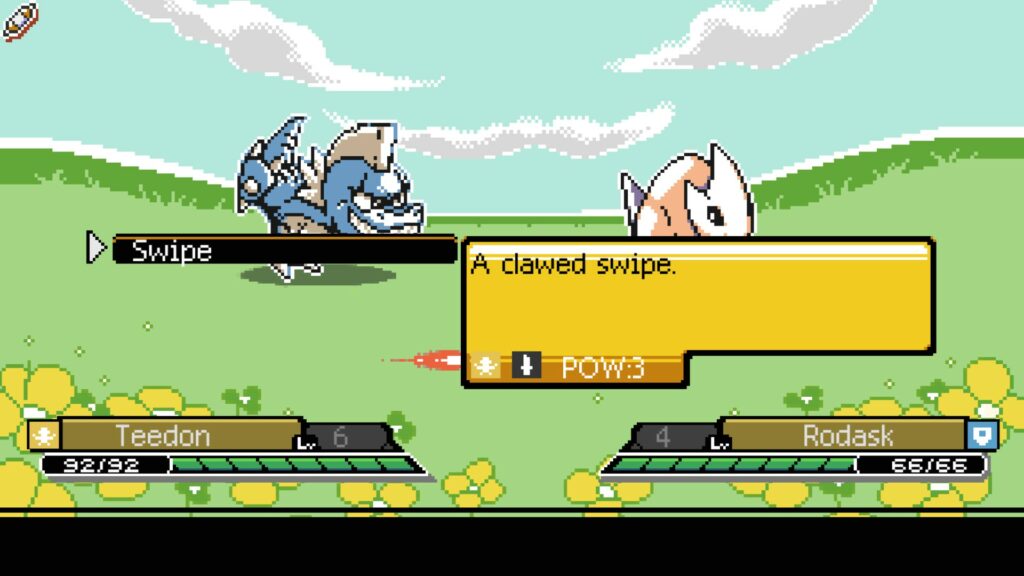 I finished the game in 35.6h without clearing one dungeon in the post-game area. The said dungeon was finished in 1.9h, and I spent the rest of my playtime to get the leftover achievements and seeing the other ending. I admit that I spent some of my playtime looking at the wiki for breeding though. Most information about monsters that are needed for efficiency breeding, as in what other forms the monsters have and which skills they will learn, is listed there. Sometimes, I feel the urge of wanting a certain monster after looking at it in the wild and end up formulating a strategy on how to breed the said monster.

Despite offering 3 difficulties, they look similar. I was switching between easy and normal mode throughout my playthrough and didn’t find any difference except the item loss if you die in the normal mode. Although you can have a problem defeating the monsters early game, you can one-shot most monsters, including bosses, after you get a decent party. Combat doesn’t feel satisfying as a result due to how the stat distribution works. 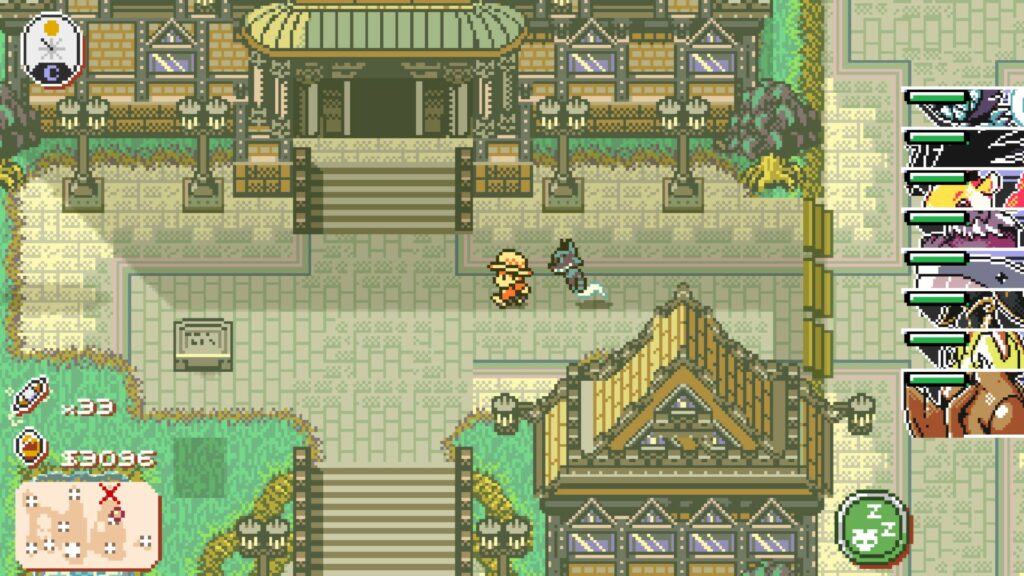 The end credits is unskippable. It can take a very long time for it to end and since the names are not sorted in alphabetical order, it is hard to know when it will end. I also experienced ~4 bugs that forces me to restart the game throughout my playthrough. Moreover, most post-game areas aren’t tested enough. More of my annoyances and bugs are listed here.

Monster Crown might look like Pokémon at first glance, but you might want to look at it as a different title instead. A lot of features that are similar to Pokémon are lacking due to the breeding feature, and the breeding alone separates the game from the popular monster taming game. There are just so many things that you can do with the breeding, whether it is to get the good-looking monsters, strong monsters, or both. However, the game can be grindy at the beginning and some bugs can hinder your playthrough, so I suggest holding off from buying it until the bugs are fixed.