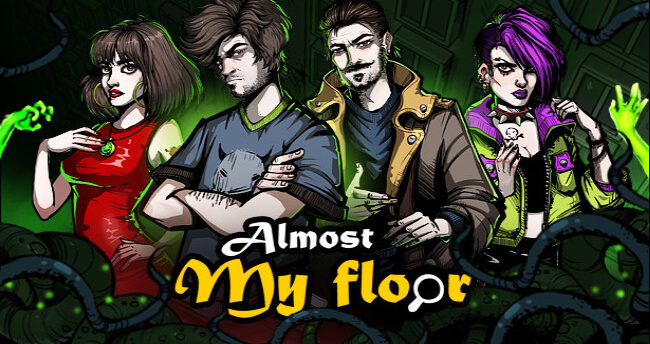 A casual point and click game with a colourful presentation about nightmares coming to life.

‘Almost My Floor’ is a short and very casual point and click game with puzzles. Majority of the game takes place within the same building which appears to be haunted as our main protagonist Alex is simply trying to ride the elevator to his floor where his apartment is located, except the elevator seems to take him anywhere but there. 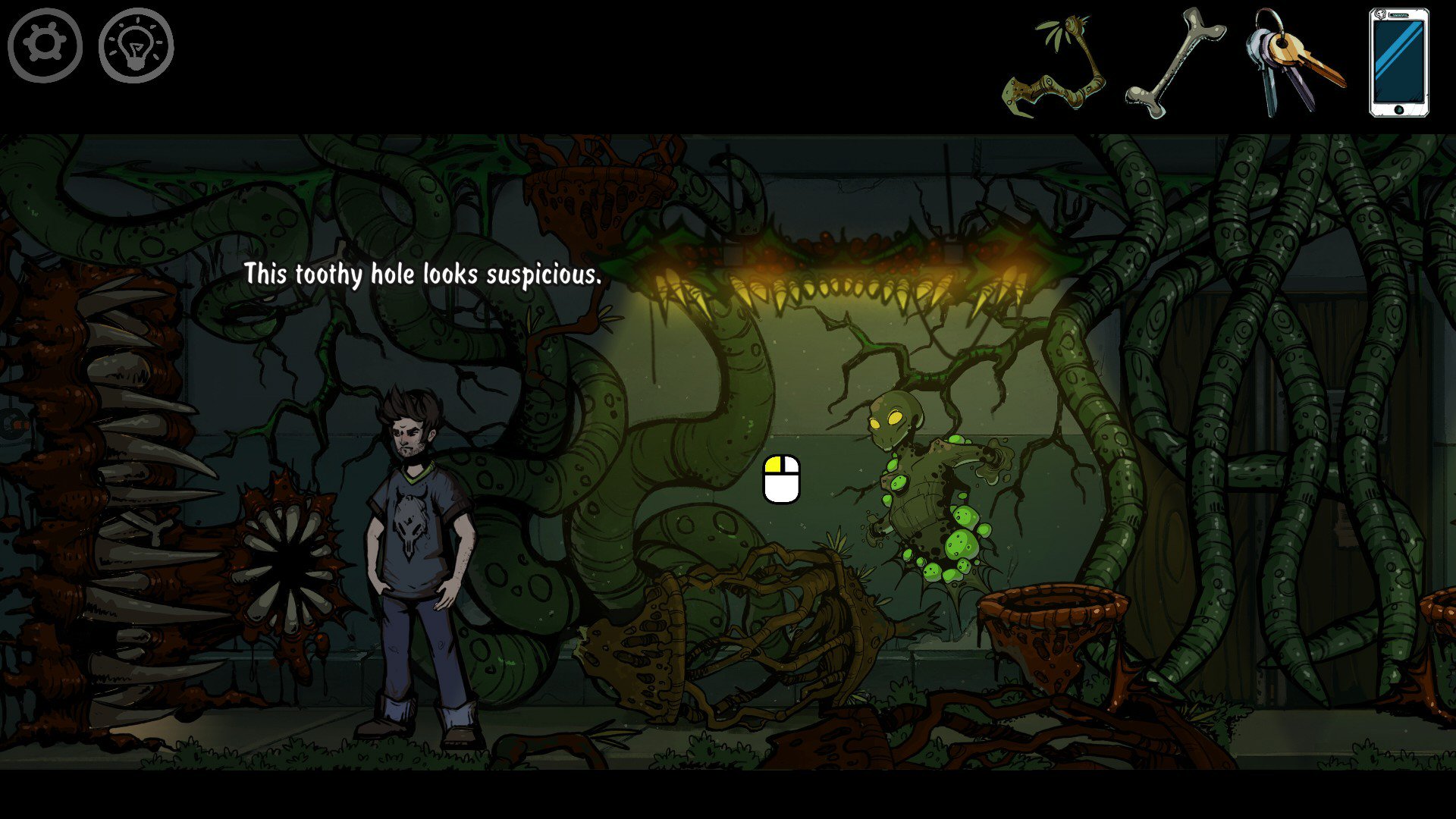 The story revolves around a handful of characters and mainly within a single apartment block, which seems to be haunted. As Alex comes back home one evening, he starts noticing strange things in the apartment building – coffee cups moving, green eyeballs watching him, swarms of spiders crawling onto him, and so on. Every time he enters the elevator to ride to his floor, he comes across more and more strange things. 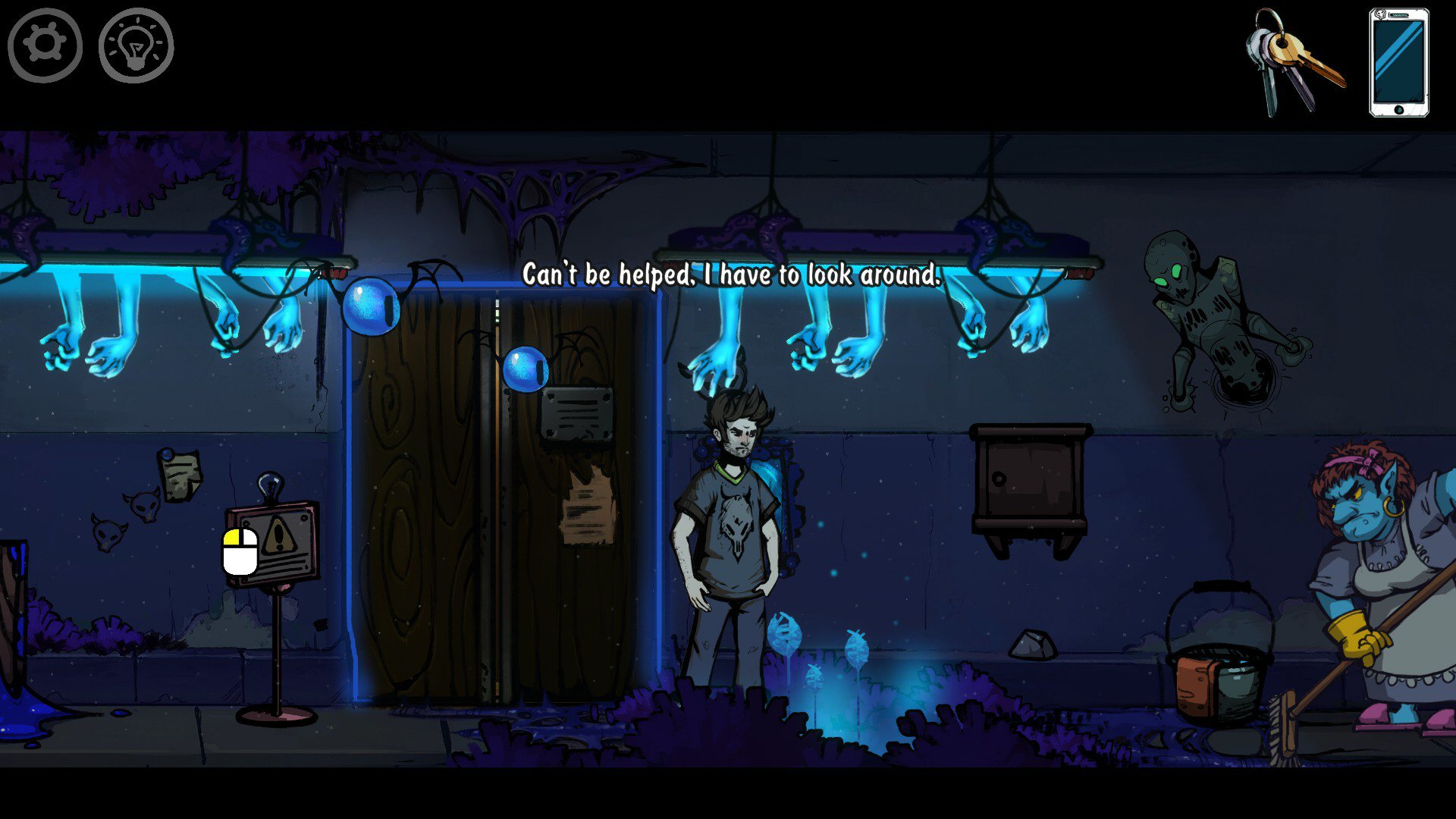 At the same time, a private detective attempts to solve a case of a missing girl, a girl who happens to be Alex’s girlfriend, and Alex is the prime suspect of her disappearance.

Although the premise appears to be quite serious in its themes, the game’s overall tone is quite laid back and casual. Despite Alex’s predicament, he still cracks jokes, flirts with women, and makes light of the situation.

The overall story is somewhat simple, but it works decently enough, particularly in the second half, where more and more things start to get revealed about backstories of characters and recent events surrounding them.

The gameplay is mainly a point-and-click where we need to interact with objects on each floor the elevator brings us to and to solve puzzles on that floor before we can take the elevator further. The puzzles all involve strange phenomena and otherworldly things, often acting as obstacles of some kind that we need to overcome. Some of those can kill us and give us a game over. Most puzzles are quite easy to solve as they’re all confined within a couple of rooms or so. Some require us to do quick-time events, however.

At times we come across NPCs who we need to talk to. The NPCs usually just give us vital information to help us solve a puzzle on that floor. Some dialogue options with them can be locked until a certain point. 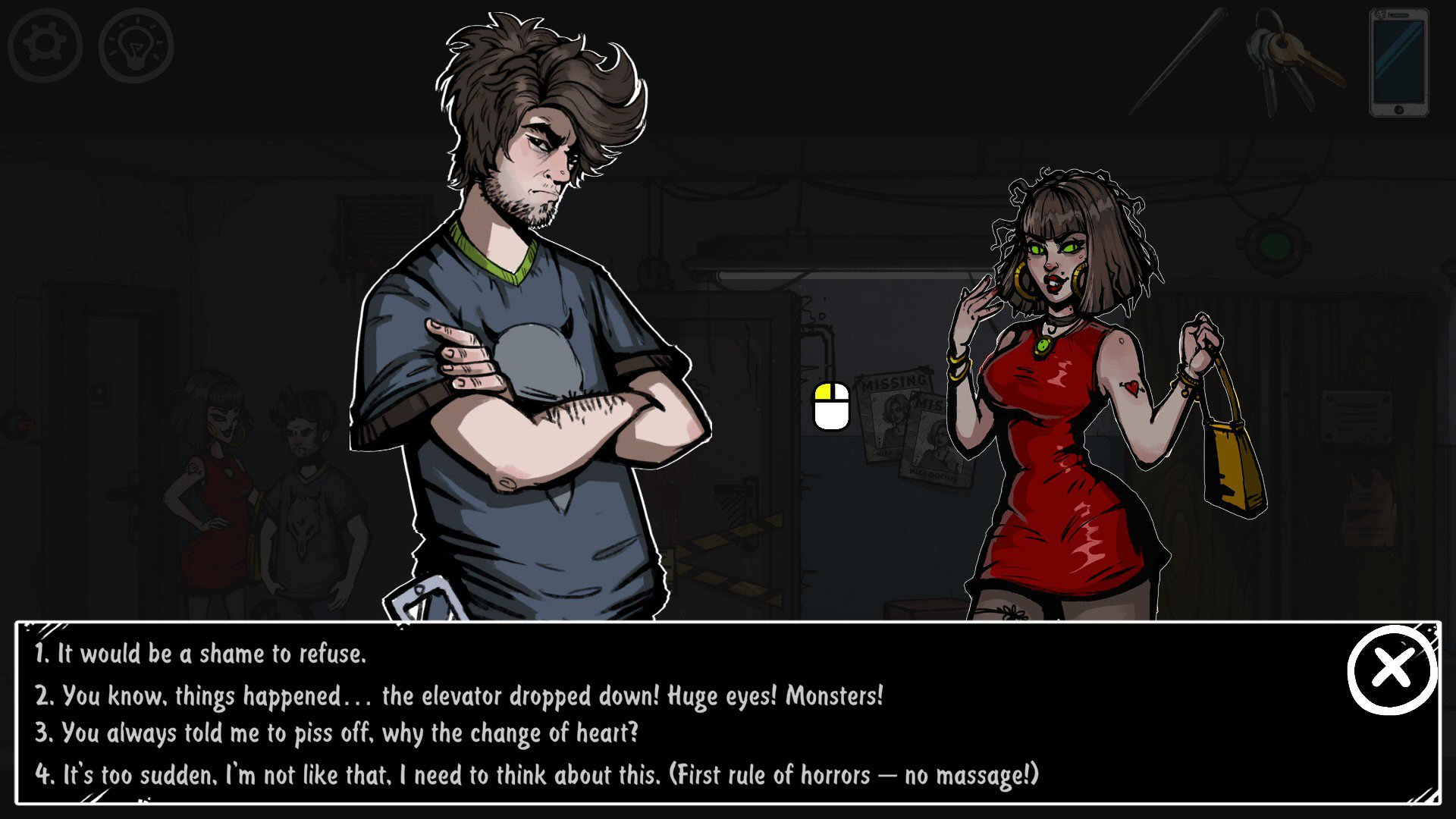 One twist the game introduces to the way we solve puzzles is that some of the puzzles can be solved in two ways, one of which involves violence of some sort where someone gets hurt. Usually Alex sees an angel and a demon on his shoulders, telling him to do one way or another. Going for a more or a less violent approach has some impact on future events.

Although most of the story we follow Alex, some scenes we see from the point of view of a private investigator Adam Trust, so point of view changes regularly throughout the game, and when we play as him, we have to put together clues that we come across and follow a trail that will shed light on what exactly is going on in this apartment building. 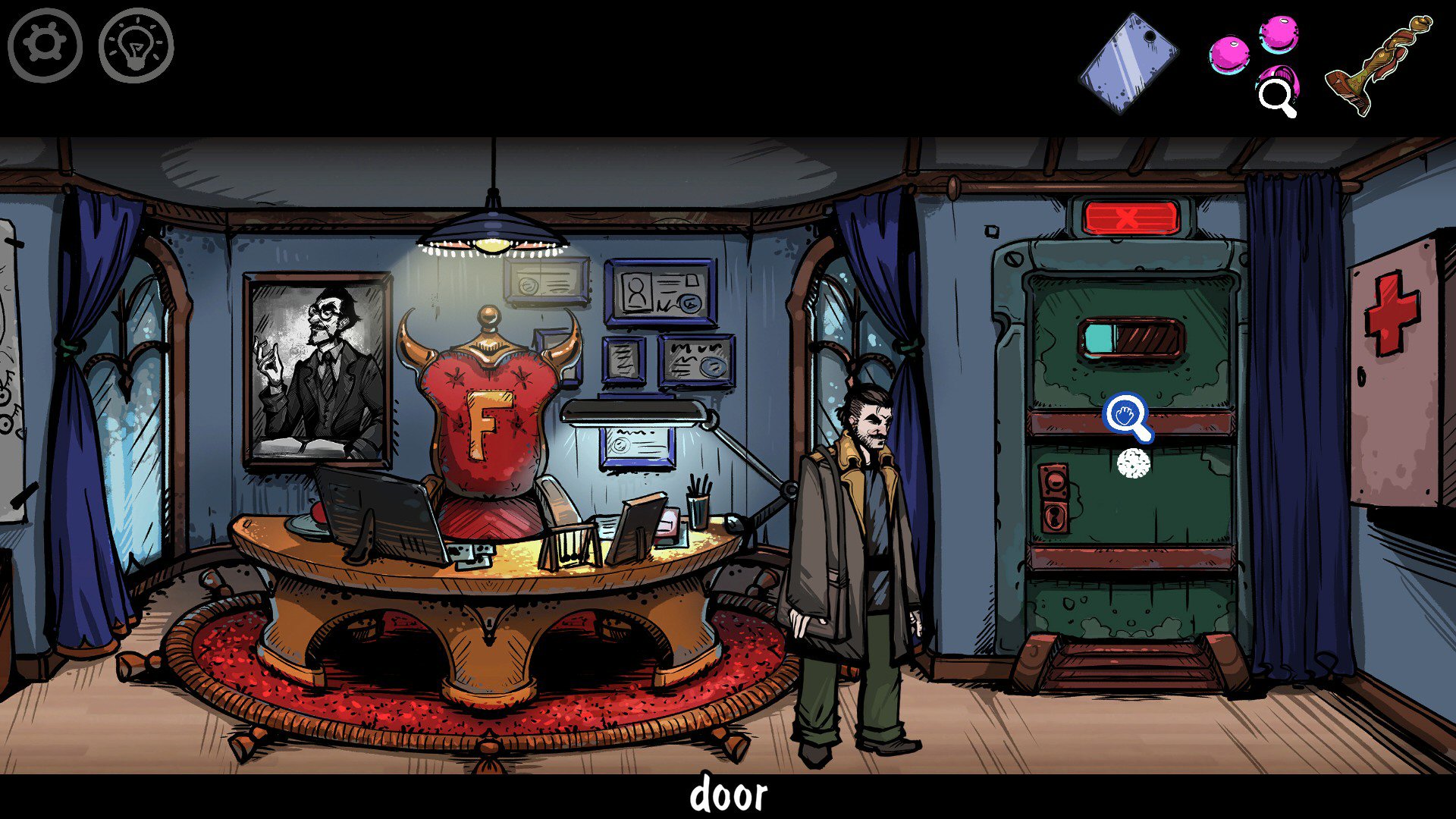 The game has a colourful and cartoony visual style, which has its own charm and helps to make the whole story more light-hearted than serious. The creature art and visualisations of other otherworldly things are pulled off pretty well. Some of the cutscenes in the game are shown in a form of comic book strips. 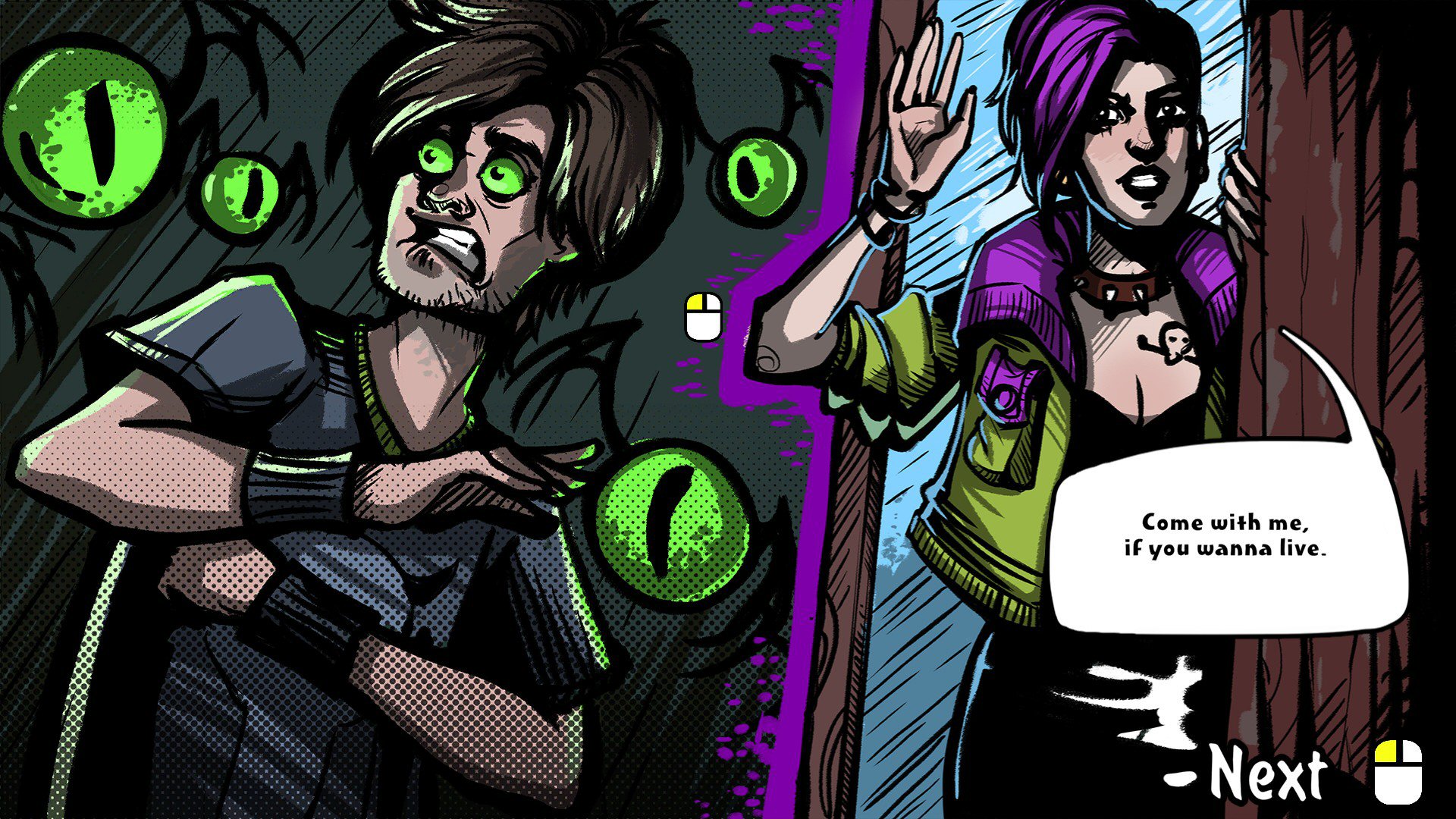 The game is quite easy to navigate and control in general. The user interface is very user-friendly and clear, and we can even highlight every interactable object in the room with a press of a button.

Music and sounds are adequate and do their job. The voice acting is a bit of a weird one. For the most part there isn’t any, but some occasional lines seem to have been voice acted, particularly the lines said by the private investigator. Not sure why such approach to voice acting was done.

Overall, if you are after a quick and casual point-and-click adventure game, then ‘Almost My Floor’ should give you a fun ride. However, it is quite simplistic and there certainly are better games out there to sate your hunger for point-and-click. Having said that, ‘Almost My Floor’ is pretty cheap and affordable and is pretty respectable in quality considering it was made by a very small team.