REVIEW: Who Needs a Hero?

Who Needs a Hero? starts with a simple concept that quickly becomes boring due to its repetitiveness.

Who Needs a Hero? follows the story of a naked person who is going on an adventure. Help the person make their choice to get rewards and possibly some clothing to cover that censored part of their body. Remember, this game is mostly just for fun, so feel free to go wild with your choices.

The game uses simple, cartoonish graphics. Characters don’t have many details, especially their eyes, although they still try to give more details for armors and distinguishable body features. The varied background also helps to differentiate the region that you are traveling to while still making them unique from each other.

Most dialogues in the game lead to yes and no options and you must choose between the two to progress the game. It doesn’t matter whichever options that you choose although some dialogues might lead to another chain story if you answer it with a certain option. There isn’t much to talk about the dialogue itself though. Everything is just mostly there for the sake of progressing the game, and the story-related one is just the generic, predictable story that is usually happening in other games.

The wording tries to turn the story into a light-hearted, casual one full of jokes. However, I couldn’t find anything funny in it. The most that I could see is how everyone is foolish enough to believe in whatever the main character is saying and react accordingly to it.

The game mostly takes the form of answering series of questions. You’ll have to answer between two choices that will impact your follower, money, fame, health, or others. You might have guessed it from the follower part, but the game makes you feel as if you’re streaming a game where you have people, or followers, watching your stream. You’ll be able to unlock a chat feature after your follower reaches a certain amount to see what they are talking about. Don’t expect much about it though – you’ll see what you’ll usually see in streams: either nonsensible chats that are unrelated to the game or whatever is in their thoughts at that moment.

The events that will come your way, aka characters and questions, are randomly generated. You might encounter the same questions several times throughout your playthrough and I found it annoying that you must wait until the whole dialogue to show before you can proceed with it. While encountering the same questions helps to figure out the best option that you need to take, it becomes repetitive later on, especially since all you have to do is pressing either that yes, no, or space button. 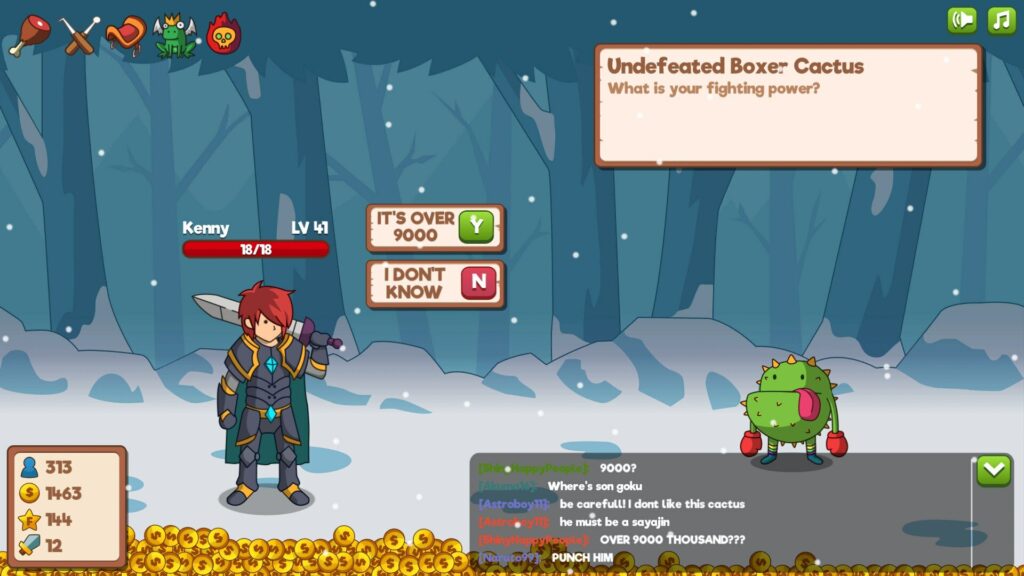 Sometimes, you will have to do combat instead of answering questions. Enemies have predetermined attack power and you must have at least the same attack power to win against it. However, combat is mostly just about rolling 2 dice, which again, is factored by RNG. Losing the fight will reduce your HP and allow you to progress the story without beating the enemy.

The game is kind enough not to force you to start the game over from the beginning if you die – you’ll only have to pay some coins and you’ll be back to the game. You don’t even have to worry about not having enough money since it allows you to have a negative amount of coins. Strangely, the RNG is designed to let you earn some coins on the following events until you have a positive balance in your account if you ended up this way. Although it’s nice that I don’t have to restart the game from the beginning, it makes me wonder why the death concept is introduced in the first place.

I finished the game with all achievements in 1.8h. I spent a few minutes after I have beaten the final boss to get the last achievement. The difficult part in this game lies in figuring out the most beneficial outcome between the two options to retain a high follower and coin count, which are needed for some achievements.

Speaking of choosing, sometimes you’ll have to choose between 4 cards instead of the usual yes and no question. This is usually used for scenes that give a high-risk, high reward scheme. However, I found that the success rate to be very low since I get failure more often than success. In the end, it doesn’t even worth choosing the option that will lead to this option in the first place. 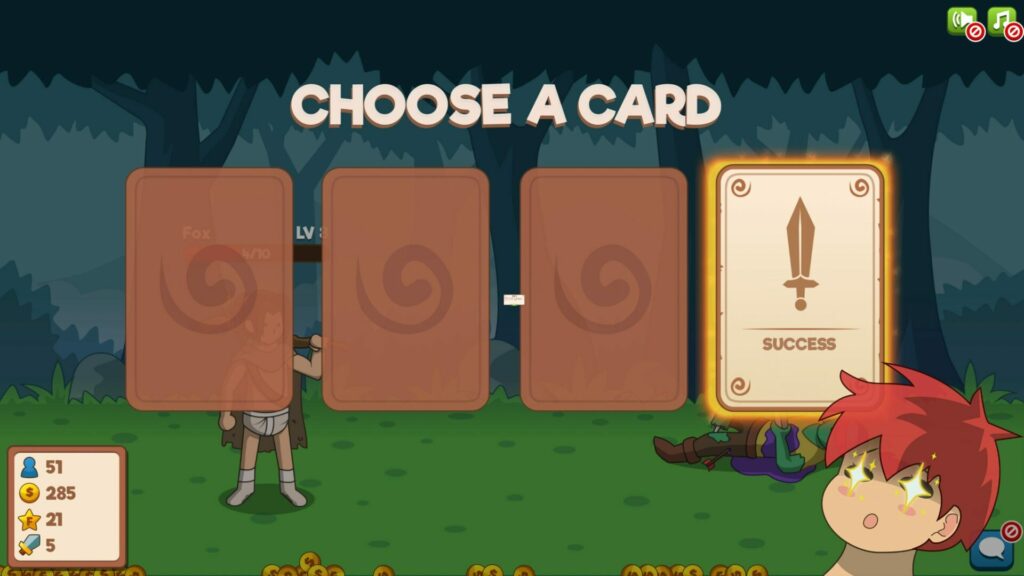 The game looks nice at first glance. An adventurer that has literally nothing is set out for a journey, looking for fame and followers. However, it gets repetitive quickly – I was bored after realizing that I had to answer a lot of questions just to get 100+ followers. Moreover, there isn’t anything else that you can do in the game besides reading the different dialogues which don’t affect the story no matter what you pick. While it was alright to have these kinds of dialogues in the game, playing a game that has so many “useless” questions between its main quests just turns the game into a grind. I wished that there is something else that can help to kill the repetitiveness.