Only one rule, don’t get killed

Project Boost is a fast-paced third-person action shooter game. The game emphasizes fast-paced challenging gameplay as well as a thrilling story that slowly unfolds while progressing.

When first launched the game had a rather presentable Menu. It was easy to navigate through and choose the settings that fit my playstyle. After playing some minutes in-game I instantly got the feeling that this game is a mix of Hotline Miami with the use of powers, all of that in a third-person setting.

Shooting mechanics and power-ups:
As mentioned, this game is the TP variation of Hotline Miami, an unforgiving fast-paced shooter. While playing you will find multiple weapons dropped by “eliminated” enemies. The variety of guns is rich compared to similar games as you can pick up multiple weapons from each category ranging from SMGs ,ARs ,LMGs ,Pistols and some Special weapons as well. Every category of a gun has a different feel and recoil to them, some guns will have a higher damage rating with a lot more recoil while other guns have an impressive DPS rating. The second huge aspect in the combat section is the fact that a plethora of powers ups is available to you. I will have to say that the powers are not some kind of gimmick, they are actually extremely helpful and needed in one way or another to effectively beat the game. They do allow you to use your full creativity for some easy kills. The abilities are ranging from Timed-Shield ,Confusion ,Mind-Swap ,Stun-Wave , and the overpowered Decoy ability.

The combat section truly feels like a breath of fresh air for the fast-paced shooters.

Map-design:
As seen by the store page screenshots someone can tell that this game takes place in an office complex. I would consider this game as a “minor” corridor shooter as most of the combat sections take place in narrow areas. The design itself is rather mediocre as the entire narrow office complex thing will get boring after some stages, although this gets fixed in the second half of the game it still is something to be noted.

Shooting multiple enemies in the head in an attenuate area can be fun but it will get boring after some time. 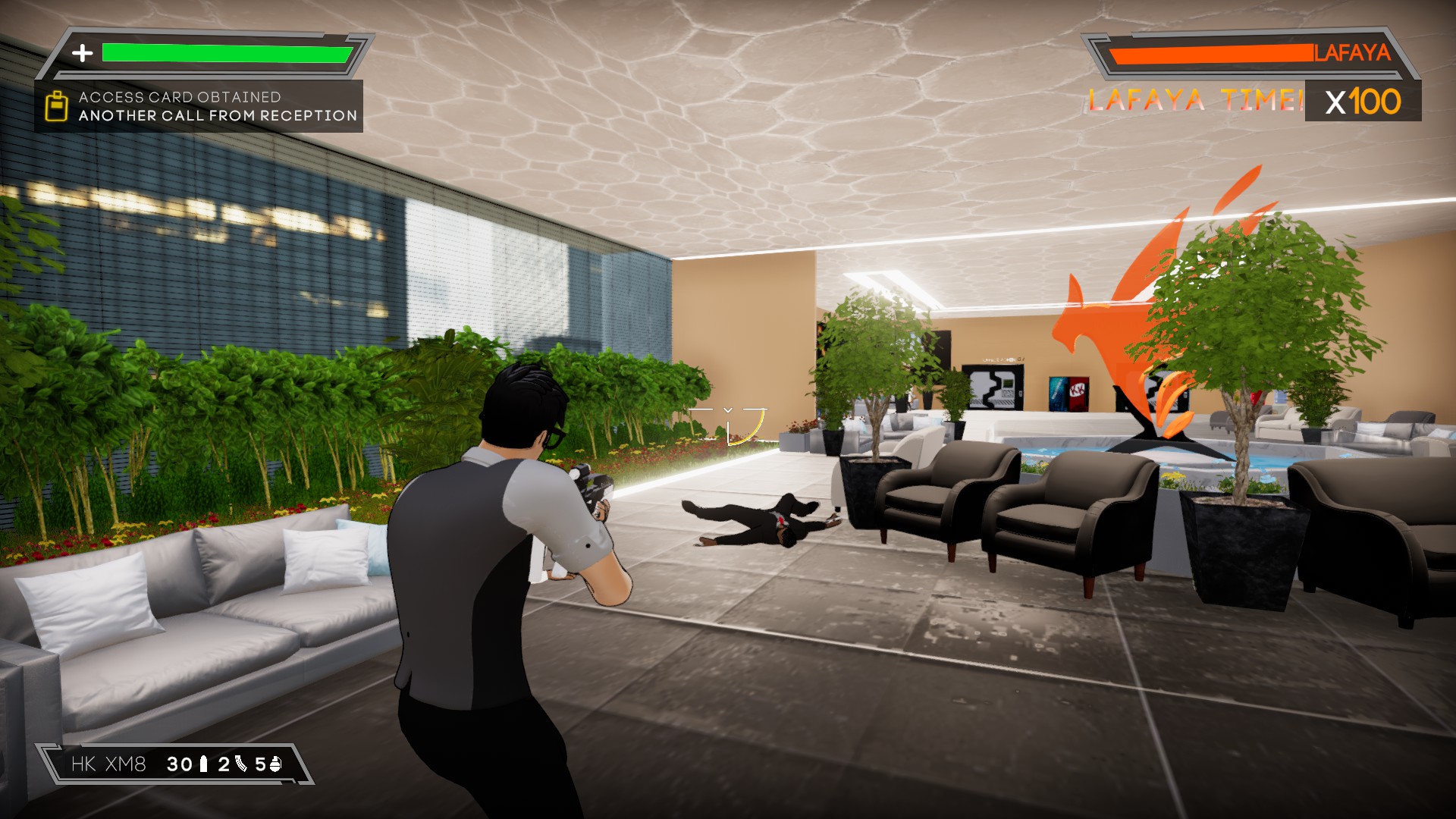 This review contains no spoilers.
The game follows the Max Payne type of setting. The length of the story is pretty lackluster but the game does succeed in keeping you entertained for the entirety of the story. Considering the duration of the story someone can tell that not many characters play a major role within it. That being said, I wouldn’t say that this is something negative as due to the lack of content within the story the developers were truly able to create some compelling characters with deep backstories and meaningful decisions. To sum everything up, I do consider the duration of the story lackluster, but the content and writing shown in that timetable are more than enough.

The game makes use of the well-known Unity game engine.

Graphics:
Although this game is not a premiere example of graphical fidelity I would estimate that this type of art style will help the game out quite a lot. The minimalistic look it tries to achieve might help it out in looking unique and fresh.

Audio / Soundtrack:
Voice acting and overall background/ secondary noises are all clear and understandable. I would argue that the male voice actor does perform a lot better in showing emotion compared to the female one. The soundtrack is rather forgettable simply because it’s just a loop of rock music.

Being a Unity game you can obviously expect it to work pretty well.

Bugs / Glitches / Crashes:
In 3 hours of shooting heads and evading bullets, I experienced no bugs or glitches at all.
I did experience three crashes when starting up the game but that was a simple driver issue on my part.

Project Boost is a nice fast-paced shooter with a compelling story. The game performs very well on most devices and it does have some sort of competition with the addition of leaderboards of multiple stats. On the other hand, for the asking price of 10,99 Eur. and the story is only one hour long without having anything that would blow you away I will have to say that the game would make a lot more sense during a sale.