Endzone, a game that does nothing perfect but still feels like a pretty good game.

Endzone: A world apart is a city builder game with survival, strategy, and economy mechanics mixed in. Everything takes place in a post-apocalyptic world where people are trying to survive and improve their lives and future.

I am not really the biggest and most experienced guy when it comes to this genre. Obviously, I have played SimCity games and Cities Skylines as well as Cartel Tycoon and even had a little rodeo with the Anno series. Endzone was a fresh experience to me as I truly am a big fan of the post-apocalyptic setting that this game offers and some mechanics truly are perfect for this specific setting. The game has a great Tutorial which is just great for someone that is new to games like these.

As already mentioned Endzone is a game that does most of the things in a normal matter like resource management, food, water, electricity, and building condition. But this game has a nice addition that actually affects a lot of areas. Contamination, you will have to constantly manage radiation in your lands because if you’re not able to keep the radiation controlled food, water, diseases, and more will start to cause you lots of problems.

City Building:
Endzone is a pretty simple City Building game, to be honest. It does not offer anything unique or different compared to other games. You simply place a building in an area without any Ruins or Trees. You should be smart with your placement of each building because the bad infrastructure will cause you lots of efficiency problems later on. What do I mean by that? Let’s say you build a small neighborhood, the area is neutral for the time being, and later on, you decide to build a bunch of Recycle Factories. Well, that area is going to be considered an unattractive area and the people living in this area will have lower Morale which will then cause them to be less productive or bring fewer children to life. Another addition would be to build efficient roads and have Markets close to the Factories and Trader Posts as this will make your city truly run like a well-oiled engine! Lastly, I like the fact that some building changes their look, for example, House Cabins do have multiple looks which is a nice attention to detail in my opinion.

Resource gathering and combat/ other problems:
Now although I enjoyed almost everything in this game there is one glaring thing, I am not 100% sure but after 14 hours I see that no new Ruins “respawn” and the map does not generate more random locations. Now, where does the problem lie here? Well, it is simple, Scrap is needed for almost any basic building or even more. Scrap catchers are somewhat of a solution to that problem but personally, I did not find them effective enough honestly. I guess after like 50 Hours someone will have no more scrap to farm and that will simply stagnate the game. It sure isn’t as game-breaking as I make it out to be as after reaching 50 hours you probably will have built and explored everything in this game but still. This causes a bottleneck as far as the number of hours someone can invest in this game. Another mediocre aspect of the game is the fact that random events are always negative. Draught happens and you waste almost your entire Water supply for a city with 500+ humans. A sandstorm occurs and wastes all of your buildings that will not produce enough until you have repaired them (for which you need scrap). Radiation happens and your city becomes contaminated which will make you build a ton of Medical Centers because infected workers cannot work which will cause more resource problems. I mean sure negative things happen but why not positive ones? For example, someone finding an abandoned van full of scrap or similar situations like these. Raiders will randomly attack you as well and destroy the various buildings in your city. If you have the resources you can simply Pay them but that gets you back to resource management and the world and random events not really liking humans all that much haha.

Be aware, spoilers ahead!
The game doesn’t really offer much of a story but I will try to give you guys some nice pieces of information about the “story”. In 2021, a group of terrorists blew up nuclear power plants around the world and plunged the world into chaos. Only a few were able to escape into underground facilities called “Endzones”. 150 years later, mankind returns to the surface – under your command! There are a plethora of hints located in some abandoned buildings that hint that the pandemic we currently live in was another big part of the destruction of society. Masks, disinfectants and more hints are constantly there if you use your scouts. Although I do find the addition of the pandemics in games a little bit untasteful I will have to say that on this occasion it actually makes sense.

The engine used in this game is the well-known Unity engine which brings great performance and stability to games. Although I was surprised that Endzone used the Unity engine because Endzone does look great honestly and I was not used to pretty-looking Unity games if I can say so myself. 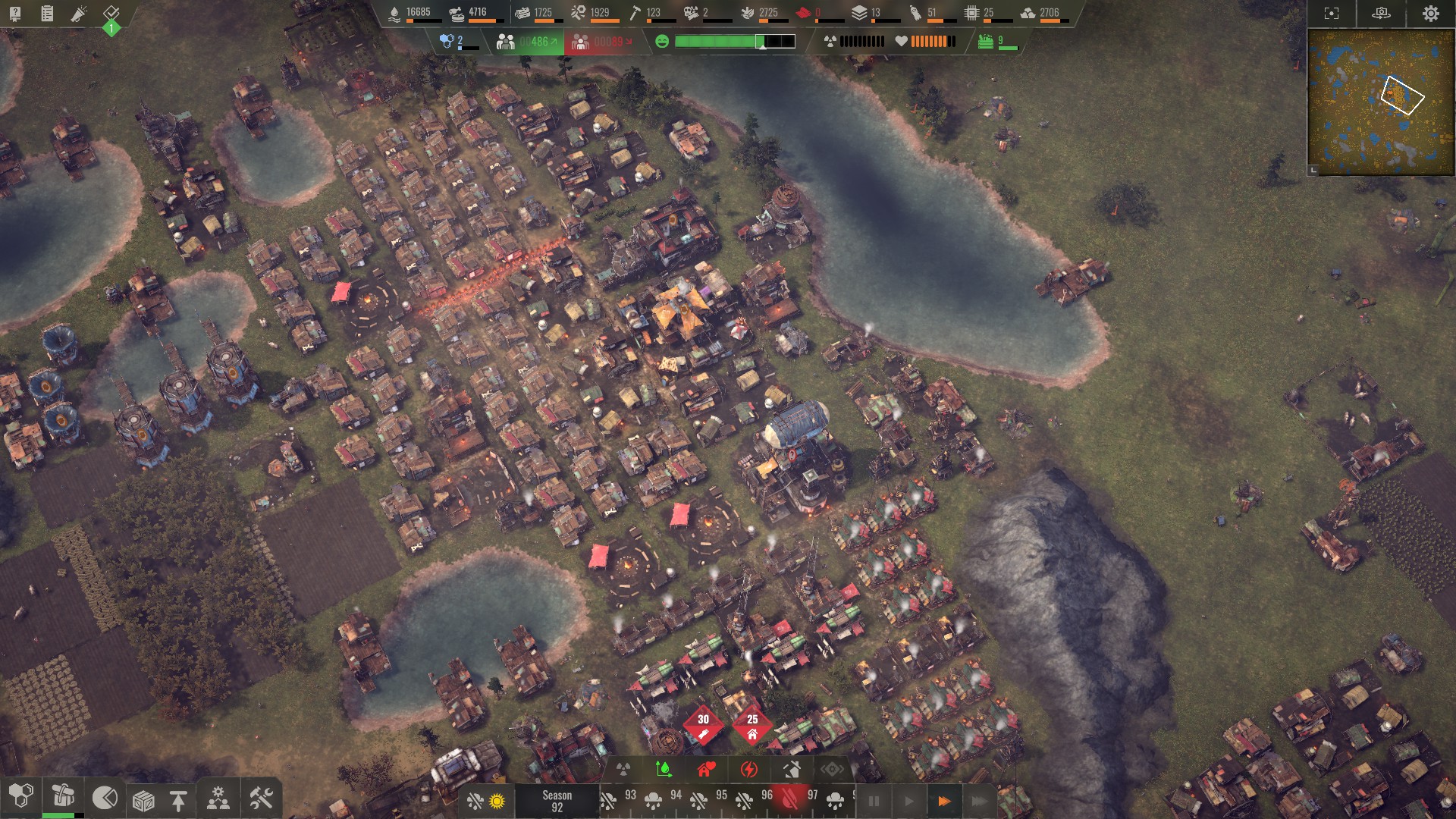 Audio / Soundtrack:
The game doesn’t really offer much as far as Audio goes. The soundtrack is rather basic and it honestly just is an instrumental loop. Most of the buildings make a quick default sound of their specific section. Basically, a Hospital will make respirator sounds and a refinery will make the classic refinery sounds. Other than that things are pretty basic.

Bugs / Glitches / Crashes:
In around 14 hours of building my own society of unbeatable warriors and mindblowing scientists, I experienced no bugs, glitches, or game-breaking bugs at all!

ENDZONE is truly more than a solid game with not many issues and even the issues presented are rather minor. I truly enjoyed my time playing this game and can only recommend it.