Black Legend is a highly climatic turn based RPG set in XVII century Europe. It is perfect for fans of hardcore combat and, thanks to custom difficulty, it’s suitable for more relaxed and story focused gamers as well.

✓ Art, soundtrack and voice acting are very good.
✓ Flexible custom difficulty makes the game accessible to everyone.
✓ A large variety of weapons, abilities and classes makes for an interesting gameplay.
✓ A well narrated story that tickles player’s curiosity.

✗ Premade difficulty levels feel somewhat unbalanced.
✗ No minimap in a game that has the player run errands and a lot of backtracking in a complex environment.
✗ All the enemies respawn each time a zone is left.

Plot and Premises
Combat Mechanics
About the Difficulty
Art, Sound and Writing
Bugs and Issues
In Conclusion

The city state of Grant was once an opulent place. However its wealth was also a tragedy in the making. When bandit raids have begun, the city asked the legendary alchemist Mephisto for help. And so he created a deadly fog that engulfed the streets, distributing the antidote to the citizens, to soon leave the helpless city behind.

The King wants to regain the control and the former glory of Grant. He promises the protagonist, a mercenary, to forgive them for their crimes if they’re able to help him achieve his goal.
And so they will see with their own eyes how far has the corruption rooted itself in the town and what devious plots are being unraveled by the cultists amidst the fog.

As they’re tasked with the activation of mechanisms around the huge city they encounter some survivors willing to collaborate. But there is no way around multitudes of adversaries, some of which wear faces of former allies.

Side quests follow main objectives, often requiring to fetch an item or talk with someone in the next zone to be explored. They will help the player to obtain very useful items.

During exploration some paths are blocked by the enemies who patrol their paths. Sometimes it’s possible to avoid the fight by following a path which is out of their field of view. However, once a false step is taken, the battle is inevitable. It is possible to rearrange the party on a limited section of the front before the combat begins

Player’s team consists of four mercenaries. Each character has a pool of action points and independent from those, the movement points. Action points seem to be fixed at the value of three. There are also two consumable slots on a character and using them has no cost.

There is a lot of freedom in the movement, including climbing up on crates and surfaces to improve ranged view angle. However it is impossible to move diagonally. In a similar way there are very few (polearm) melee skills that allow for such an attack.

A fighter is more susceptible to damage if they’re hit in their side or back. If a fog grenade has been used the enemies within the area of effect can’t be attacked with a ranged attack nor some of the melee ones.

There are also some abilities and items that grant statuses such as “Burning”, “Blinded” or “Inspired”. 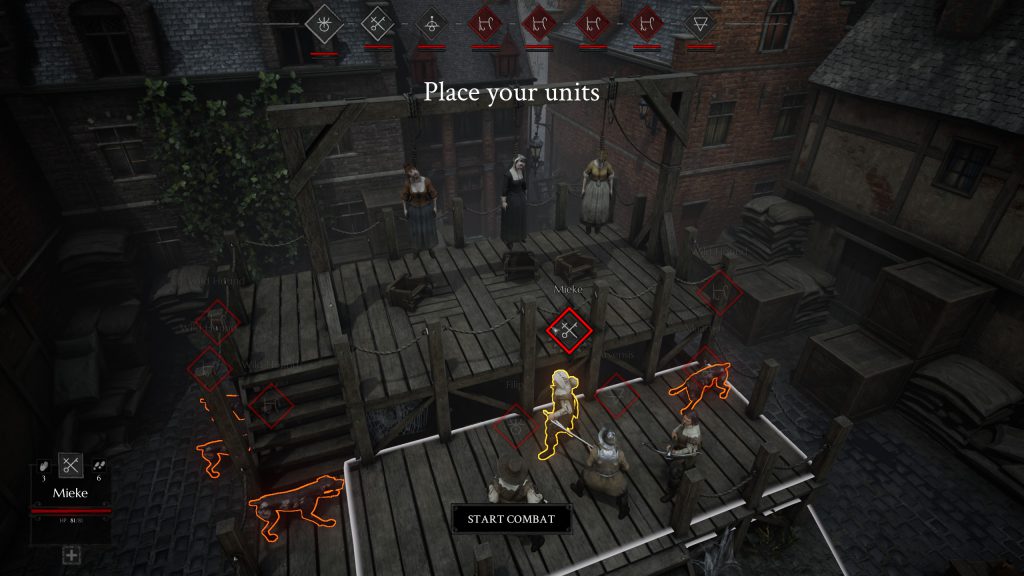 Nothing is really set in stone when it comes to characters and their builds. Outside of the battlefield the classes of each character can be changed freely. There are fifteen of them in total and each can only equip a few selected weapon and armor types. Different classes are unlocked only after those requirements can be met.

Additionally every class influences differently the growth of a character as it levels up. This should be considered when choosing the set of skills the character should use, since their strength scales from a specific statistic.

Initially a skill can only be used by the class it’s tied to, using a specific weapon type. When used in combat multiple times the skill is learned and can be used by that character even when they change class and weapon. But even when they have been mastered not all the weapons will be able to perform all skills. Passives can be learnt in the same way, however they are restricted to their classes.

Attack skills have a modifier on them, which allows them to apply a single or multiple stacks of humor on the enemies. These are Rubedo – Red, Albedo – White, Nigredo – Black and Citrinitas – Yellow. Those can stack up to three times for a color and some of them react together.
A catalyst attack will consume all the reactive stacks and deal a large amount of damage. It is possible with some abilities or consumables to cleanse the humors on a character as they’re very dangerous.
It can be melee or ranged, depending on the type of weapon used. Some classes allow for both types of armaments to be equipped at the same time.

Two trinkets can be equipped on a character. They usually grant bonuses regarding application of humors on the enemies.

Disclaimer: If the player wants to just enjoy the story, there is also a custom difficulty, although it will block some achievements.

I suggest to whoever decides to play the game to make a first run in which they will try their hand at the mechanics and see what difficulty will better suit them. This game is challenging even at “easy”. The encounter difficulty grows progressively and the player will be always at edge, even if they make they explore entire maps and skip no encounters. Higher difficulty levels add further challenges such as less health recovery after battle and make the game extremely hard.

The variety created by different weapons and classes is both fun and overwhelming. While it’s quite an original process it adds a lot of complexity and makes the learning curve steeper.

All the enemies respawn every single time the player leaves a zone and this can become very frustrating as there is no minimap and navigation through the town can be confusing even with directional signs and shortcuts.

Worth mentioning is a very unique choice. The player has the freedom to choose from a number of places where they want to fight the second boss.

The graphics are quite detailed and moody. The town looks like it was once alive and now is an aching shadow of what was. The artists captured perfectly the grim fall of a once great and active centre.

The class icon design is very ingenious and noteworthy. It takes shapes from alchemical symbols and recomposes them into visual representations of each class. 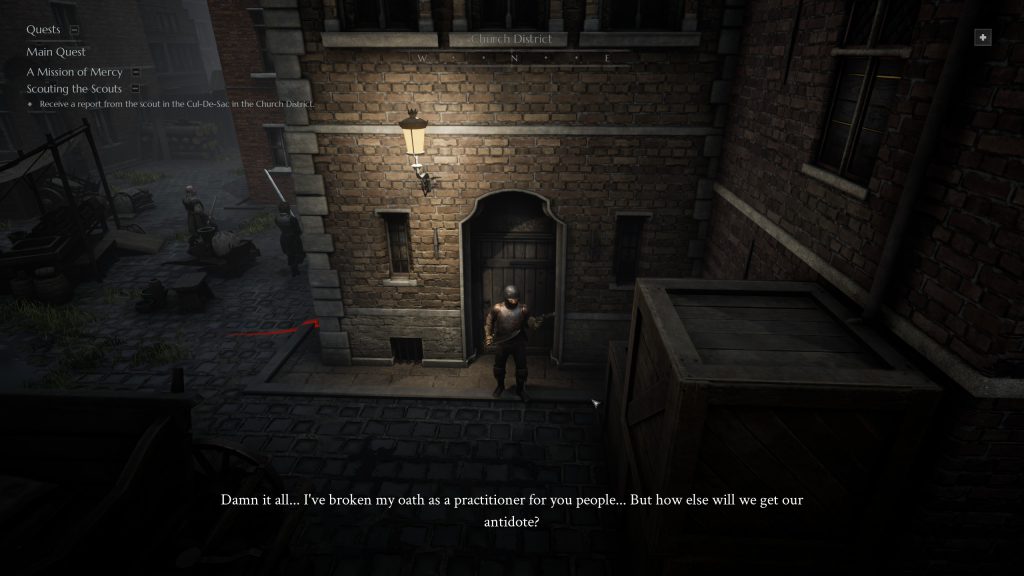 The dialogues are intriguing and read by skilled voice actors. In the beginning it might seem like they lack that little spark of emotion, but as the story goes on the narration becomes more compelling as well. The soundtrack ties everything together beautifully allowing the player to immerse themself in the world that is being created in front of them.

While using “Hotshot” ability which allows two indipendent shots from a firearm, if the player tries to perform a different action after the first shot, the game will freeze.

The camera might be hard to move sometimes during battle, but in that case rotating the view will allow to conclude a turn with no issues.

I also find it very hard to climb on objects while exploring and as a result couldn’t reach a loot cache I found.

Aside from the preset difficulty levels, the “custom difficulty” option makes the experience fully personalized. And so it can be enjoyable by those who seek hardcore turn based combat and for those who just want to follow an engaging story.

The game is set in the XVII century in a world with just a sprinkle of dark fantasy. It also features a huge array of weapons mostly from modern Europe, as well as some gems like the Labrys, a gorgeous Greek war axe.

The art is highly convincing and the environments carefully constructed. The town feels real and is very immersive. There is a fair share of death imagery however.

The time required to complete this game is subjective, as it requires 15+ hours with the easiest settings and can be replayed with a game+. My suggestion is however to give it a first test run before to avoid getting lost in the mechanics.