If only dust was that easy to clean up.

Surprisingly enough, I had no idea about the Anodyne series until this Switch release (weirdly though, I do know of the developer’s other title, Even The Ocean). Though, with hearing how much of a positive reception it got when it originally released and reading about the premise, it caught my interest instantly. It also helped that this can be played without playing the first Anodyne, since I obviously haven’t played it yet, to understand this sequel. There’s really only references that will be lost to new players (the one I know of is New Theland is a reference to the first game’s world being called The Land). Anyway, let’s get to it.

Anodyne 2 has you control Nova first inside of her egg before she’s born, at The Albumen Shore. While this is where you’ll be introduced to what you’ll be doing throughout the game, this is also to have a Glandilock Seed implanted in you which is meant to keep you nourished and connected to The Center, the creator. Once you’re born, you get to see your caretakers in the flesh, C Psalmist and Palisade, where you learn that you live in New Theland and the purpose of why you were born. You’re told that you were born into a war against Nano Dust that gathers within everyone’s minds until they lose themselves to it. With your purpose being a Nano Cleaner to clean the Dust in those that were severely contaminated with it. You’ll then put the Dust into the prism container where The Center will recycle it into energy and use the cards to reinforce it and restore it to its former glory. And that’s what you do first in Cenote and then the outside world to save everyone in New Theland. However, as you continue onward, it becomes apparent that something isn’t right with your teachings. 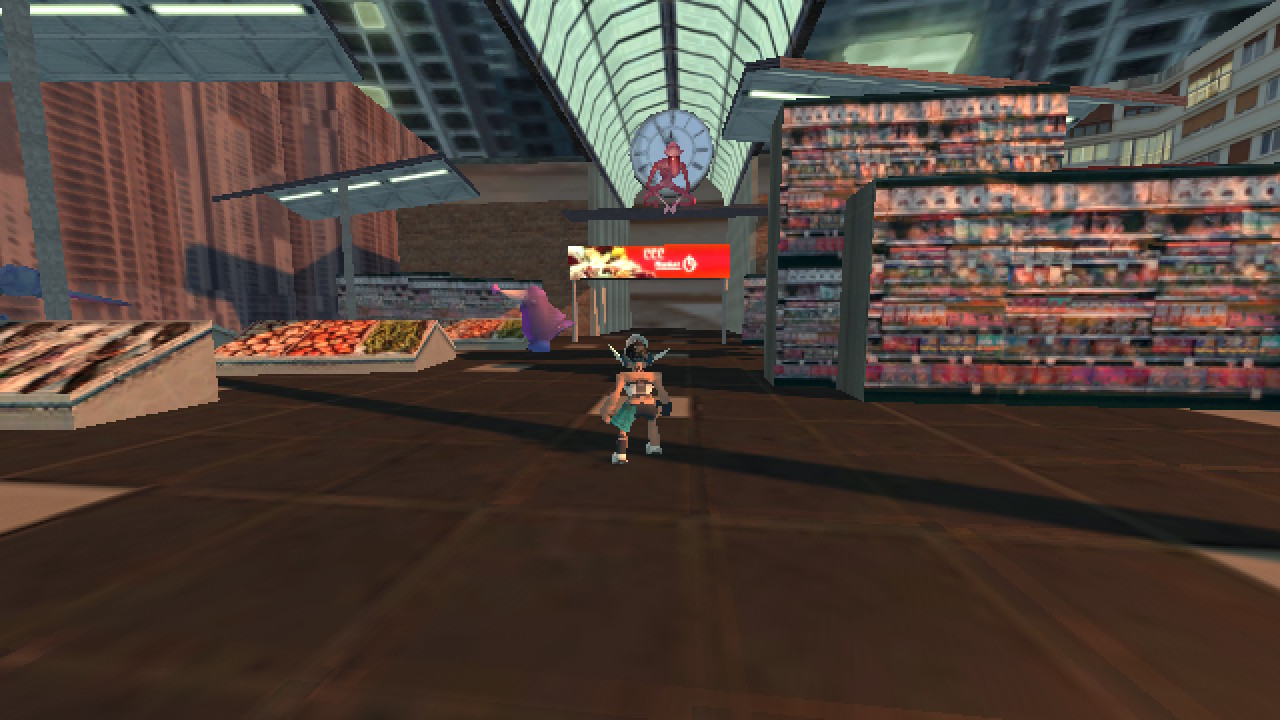 Anodyne 2 is a mix of 3d and 2D worlds. The 3D world is where you’ll be exploring New Theland, though with how vast the world is, you’re quickly gifted with the ability to turn into a car so you can travel faster. You’ll also be able to speak with the people inhabiting New Theland. Taking up the encouragement to explore will also lead you to find cards and health upgrades. However, the main purpose is to find those that need cleaning. Once you do, and they call out for you to help them, you can then start the process of shrinking into them by playing a minigame where you’re shielding yourself from bullets until you get close enough.

Once you shrink yourself inside them, you’re transported into their 2D world that resides inside them. These are pretty much the game’s dungeons. Each of these end up bringing in something new both in the world (the look and the characters inside these 2D worlds) and the puzzles or mechanics. Here, you’re wielding a vacuum where you can suck up any Dust that pops up, anything you can use to fight against the enemies (or even the enemies themselves), and a way to solve any puzzles you’ll come across. Once you get to the end of the 2D world, you’ll be greeted with a Dust crystal that you’ll turn into a Card. These Cards have little blurbs you can read, but they’re used to reinforce the Dust Prism so you can store more Dust and unlock the next area (or the next story act) once you store enough Dust to fill it up. As you can only store so much Dust at a given time, you’ll probably find yourself grinding Dust towards the end, but this isn’t as bothersome if you know the 2D worlds that produces the most Dust. It will really only take you a minute or two and at most will take you two runs (well as long as you’re trying to store the Dust as soon as your vacuum is full). 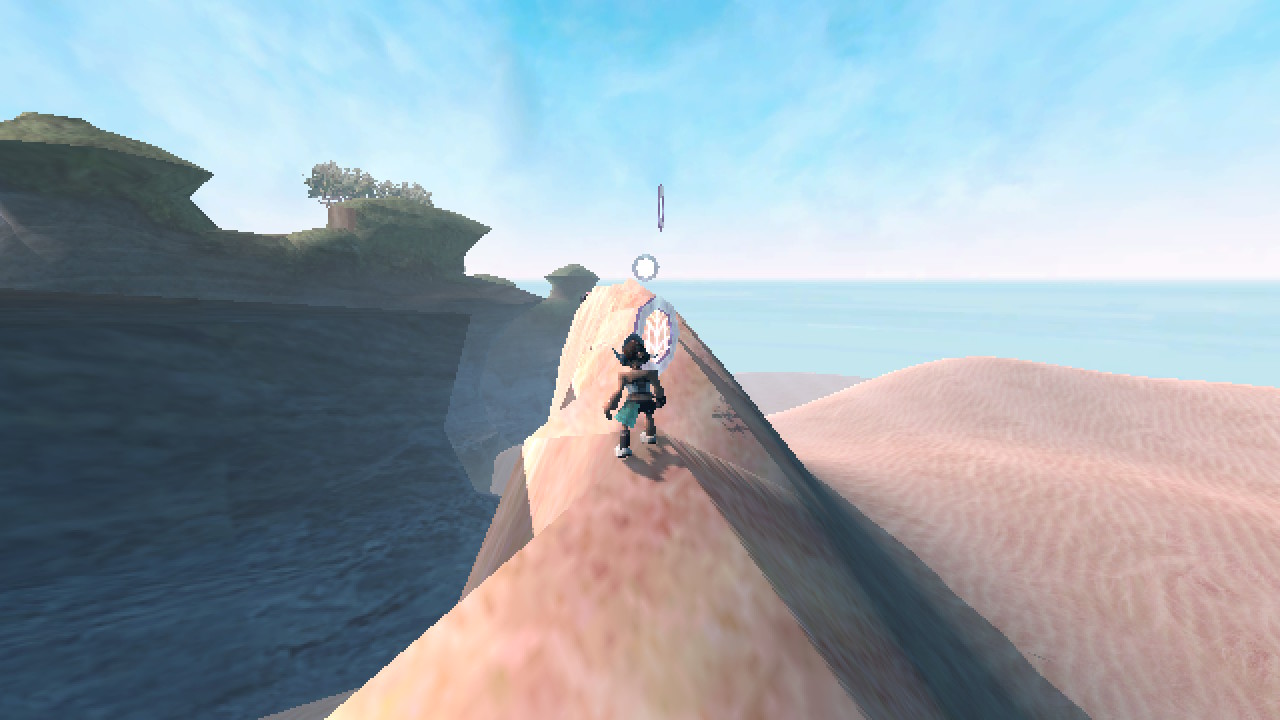 Once you get around the half way point, Meta Coins are unlocked and scattered around New Theland and even inside some of the people you’ll be diving into. You’ll run across a good chunk of them as you’re walking or driving around, but a lot of the others are out of bounds. I found this aspect pretty cool as you’re not only encouraged you to look at something and be like “hmm, I wonder if I can climb that” but also encouraged you to boundary break as you find a way to clip through walls to get those Metacoins in there or wonder if there’s some behind that mountain or if you can somehow fall into Cenote without taking the elevator down. It’s actually pretty fun to search for these hidden Metacoins as you try to figure out how to possibly get to them as you can just jamb yourself between two buildings or mountains, turn into a car, and find yourself inside it once you revert back. This did bring on a consequence that you may run into where the camera goes under the ground before snapping back to where you are multiple times in your playthrough. It was an annoyance, but that’s it. If you do find yourself falling into the void underneath, the game will spawn you back in after a while (though, this will give you a good-ish look into how many Metacoins are left and where they roughly are).

You can use the Metacoins you collected in the Metashop where you get to purchase some behind-the-scenes stuff along with a Card Detector. This includes some commentary from the developers on their thoughts and why something was designed the way it was, some weird logs, and warps to prototype areas (which also contains some concept art and artwork) and deactivated debug areas. As someone that just loves to look at concept art and seeing how things were and evolved to what they are now, you can guess that I enjoyed this. To purchase all of the Metashop stuff you don’t need to find every Metacoin and I suspect that you can possibly make do with the ones that are in-bound. 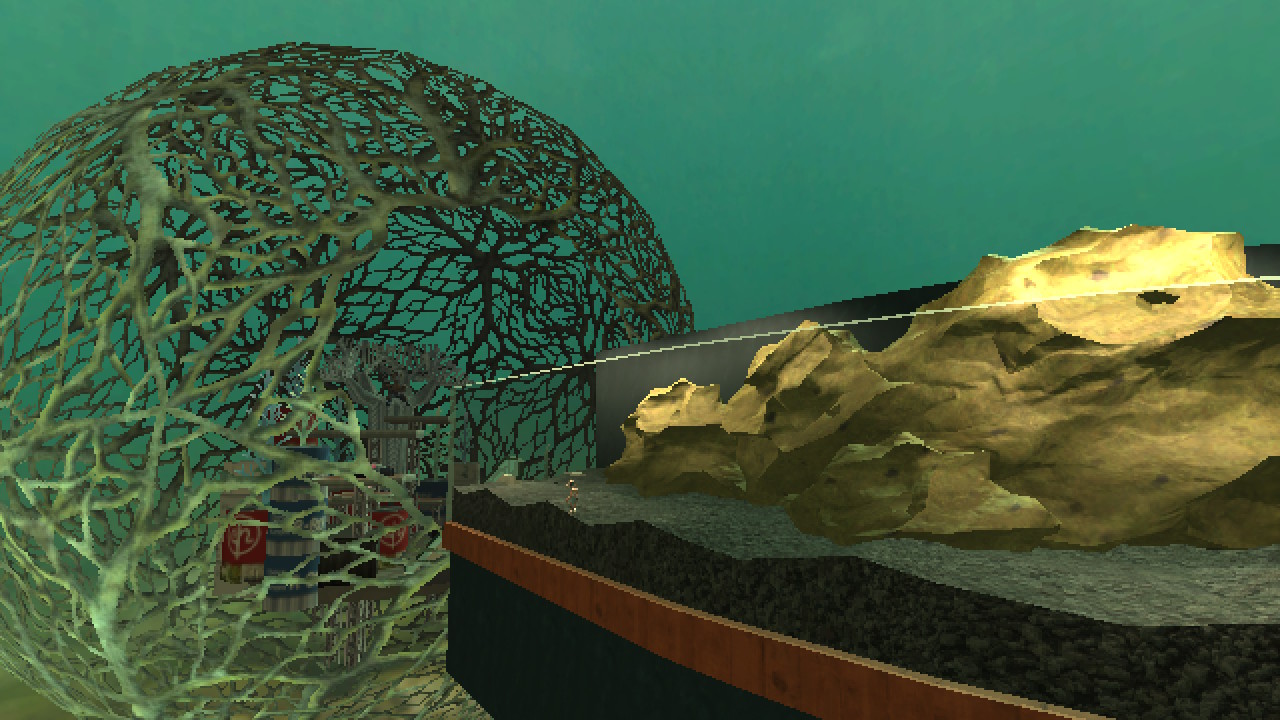 In terms of postgame, it’s not as much as I heard the first Anodyne’s postgame was. A portal that was once locked off is open to you once you finish the game that leads to The Land. Letting you explore what happened to The Land after the ending of the first game and you can purchase logs from the Metashop that heavily implies what lead to the creation of New Theland and what The Center actually is. Other than that, you can go find any of the other Metacoins you missed if you choose to, though you can easily stop once you buy everything from the Metashop as you’re told you don’t get anything special for collecting them all. 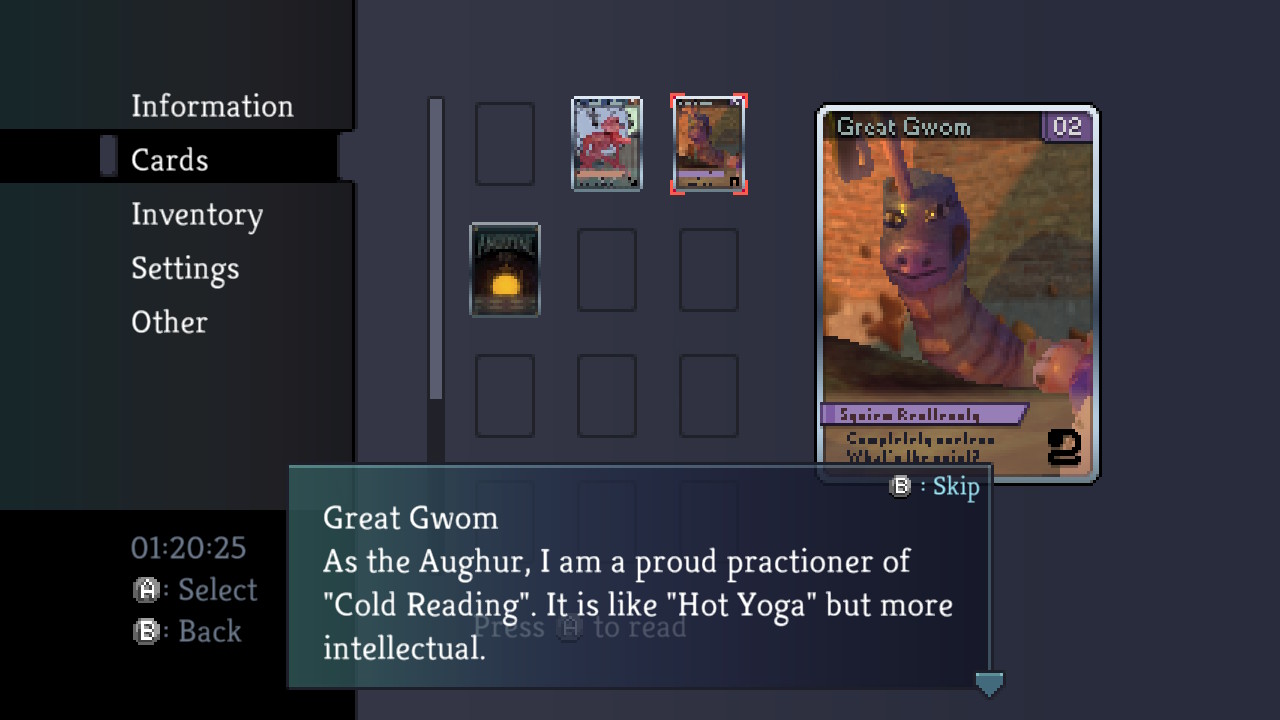 If you’ve been dying to play Anodyne 2 on the go, the time is now. The game plays wonderfully both in the 3D and 2D worlds. If you’re also worried about the text size, as there are a good handful of games where the text is just too small, this isn’t a problem here either. When I decided to play Anodyne 2 docked, I was pleasantly surprised that it was big enough to read without struggling and I could comfortably sit back. Though, I did find the 2D world I was in (Dustbound Village) hard to decipher, but it could have just been because that world is the busiest one out of them all. The only hiccup this port has is that some patches of the ground/water textures are weirdly not being rendered alongside all the others surrounding it and that the talking prompt shows up even during cutscenes. 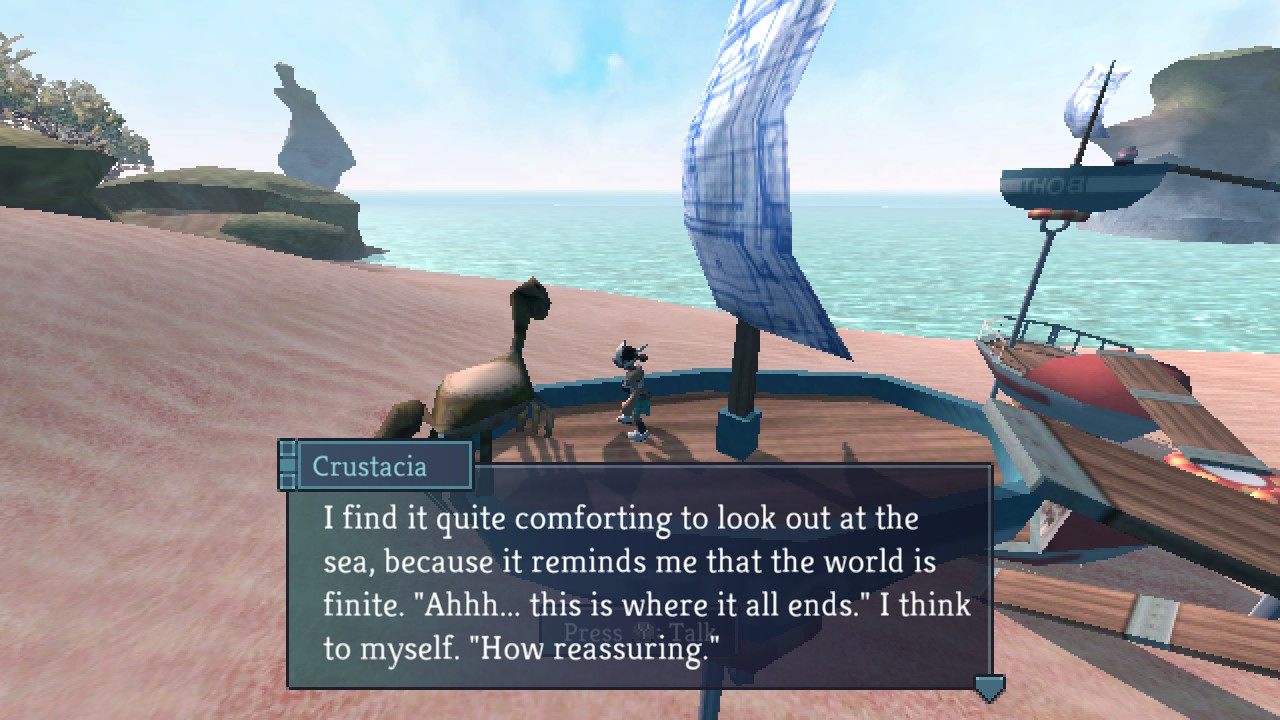 I’m glad I decided to jump into the world of Anodyne 2 as it turned out to be a great and unique game with a surreal, symbolic story and experience. It managed to surprise me as the story progressed, with each 2D world your shrink into, and how it encourages you to access areas that you would otherwise wouldn’t be. While Anodyne 2 won’t be for everyone, I highly suggest checking it out as you might find yourself sucked into this world much like myself.