A point-and-click game about a simple Ukrainian man trying to get out of debt.

Highly Likely is a short and light-hearted point-and-click game that is set in a rural Ukraine and follows a man named Mikola as he tries to get himself out of an enormous debt. The game uses a colourful visual style and simple mechanics to provide a nice, casual experience. 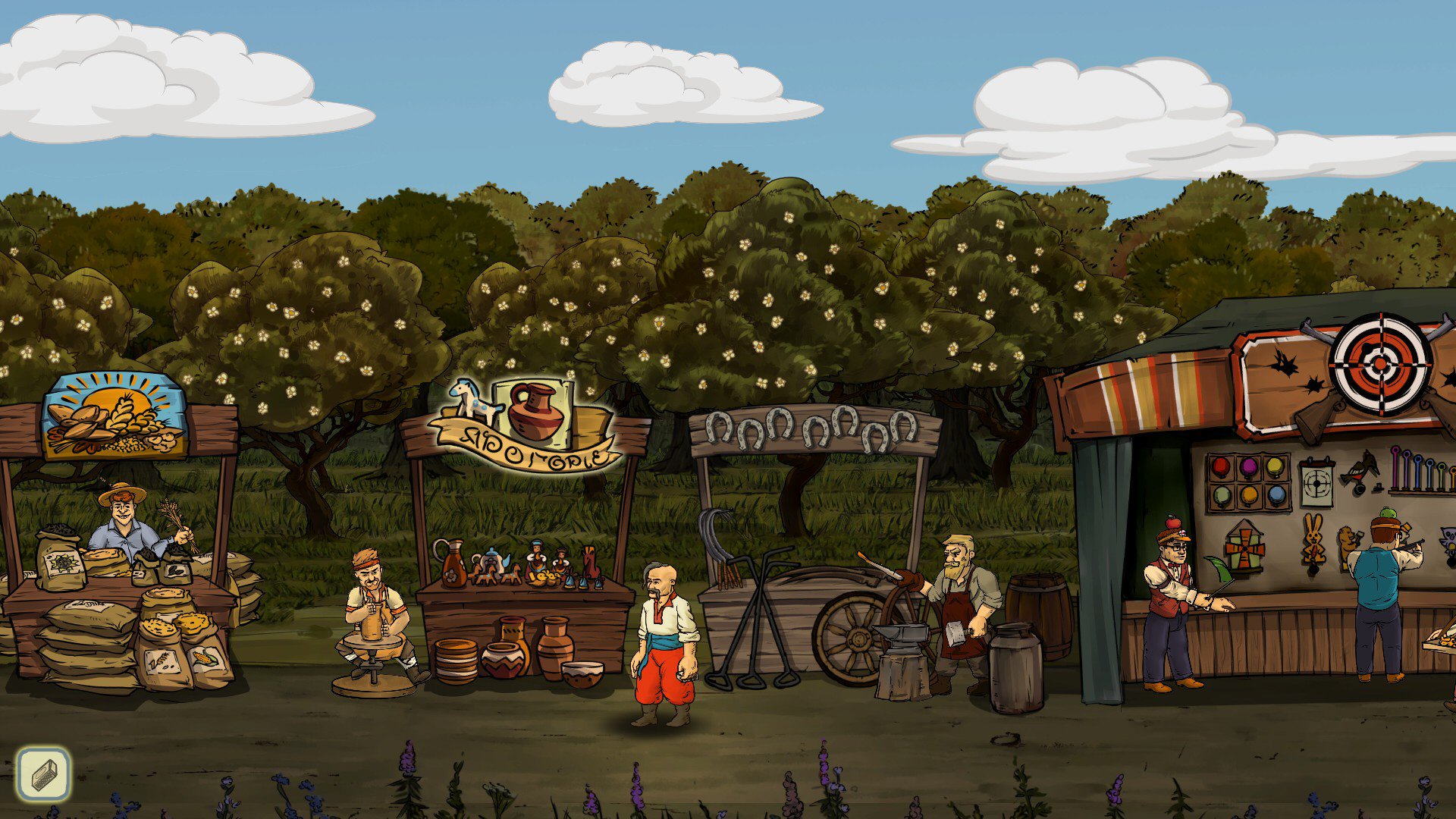 The story begins when Mikola gets a loan from a bank, which he uses to buy seeds for growing crops. However, severe weather during the summer destroys all his crops and leaves him with no harvest to sell. The bank is now asking him to repay the loan while Mikola is completely broke. He now finds himself a new business opportunity, one that is risky and could land him in trouble with the law, but he knows that he’s got no other choice. With each day, new obstacles and difficulties arise as he tries to go about his questionable business while at the same time trying to help his wife out with her duties and have a social life with his mates. 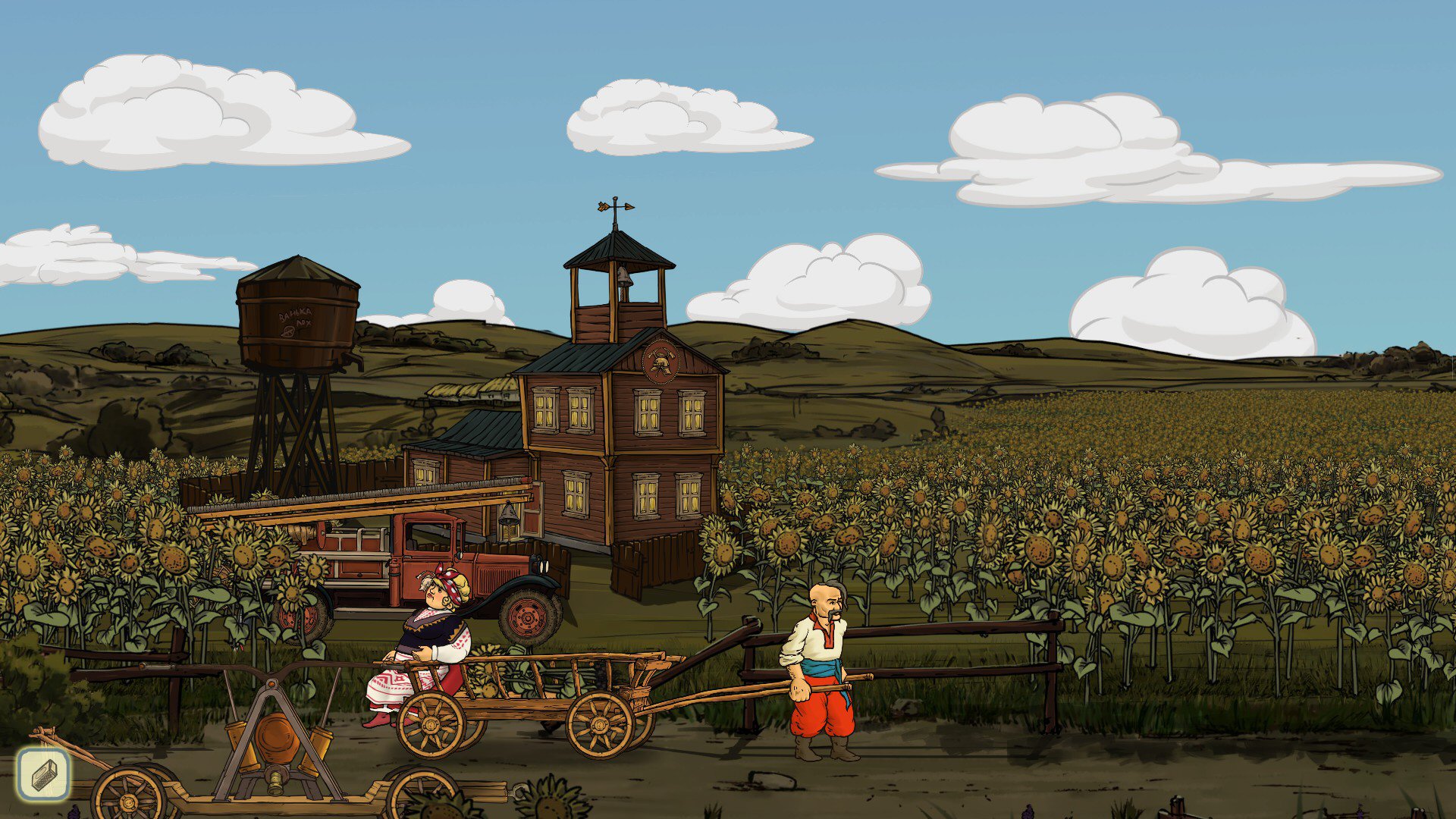 It’s a rather realistic life situation that could happen to just about anyone, but it’s delivered in a more light-hearted manner and feels a little bit like a mature fairy tale. The entire time all the main character’s actions and other events are narrated by a narrator, as though someone is reading this story out to us from a book.

It is a fairly short story in general, and doesn’t really have huge climaxes and action scenes, but it has some charm to it and is fun to follow through till the end.

The gameplay is very much on the simple side. Most of it has point-and-click mechanics where we interact with the environment and pick up useful objects to be used later. It’s very linear and everything has to be done in a sequential order before we can go to the next task. Most of it is quite straightforward and easy to solve. At times we get mini-games too, such as keeping the temperature in a makeshift device at a certain level by feeding planks of wood into the fire or driving a train. 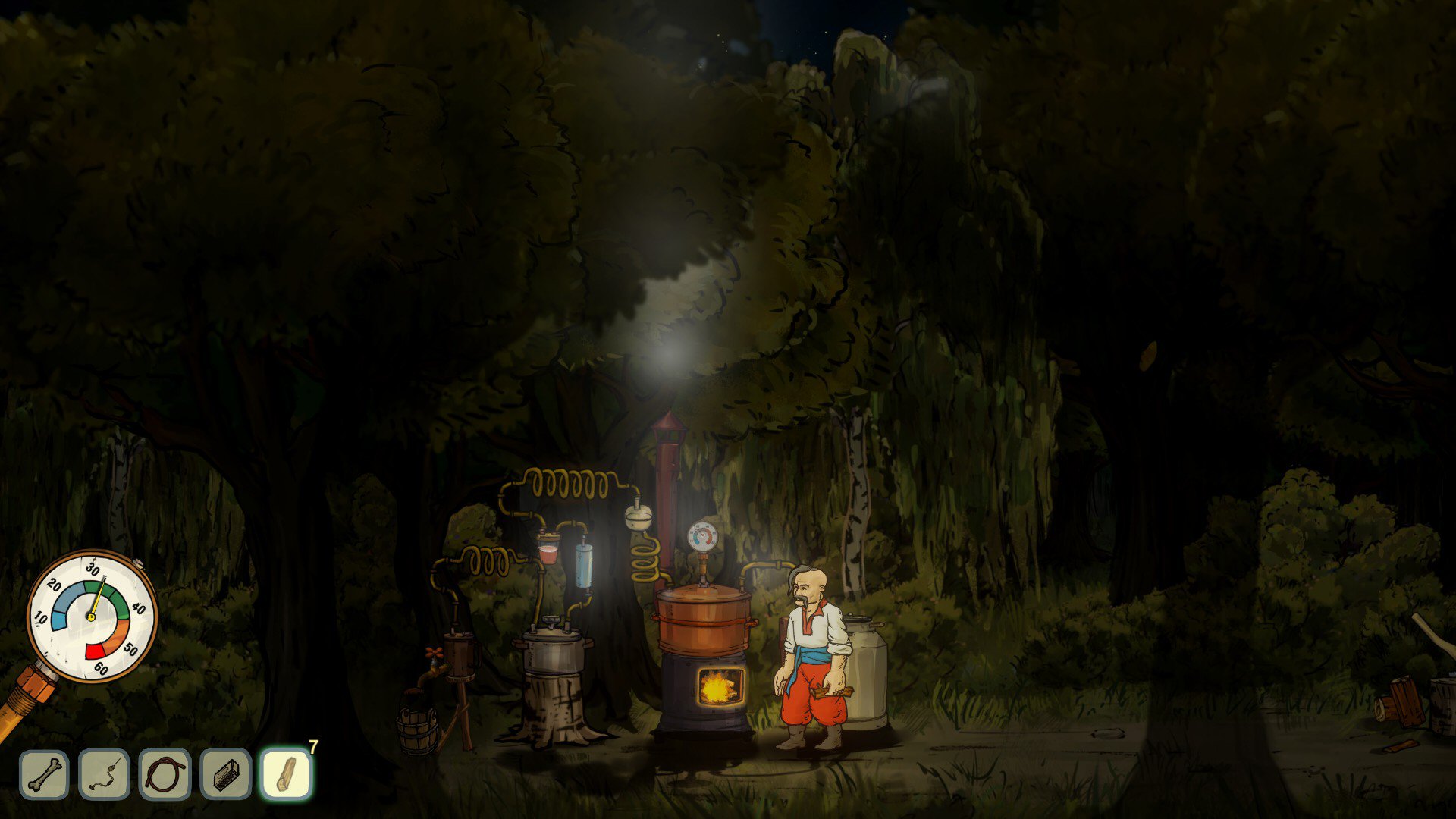 Usually the objects and parts of the environment that can be interacted get highlighted, so no pixel hunting is ever necessary. My one big complaint though is that the character walking speed is quite slow. It changes depending on the scene, and sometimes he does walk faster and more briskly. But most times it’s a bit too slow. The movement between maps is pretty good though. We often have to backtrack between the areas, but the game takes that into account and would often skip some of those areas if nothing needs to be done in them, letting us go straight to where we need to be without going through 4 different area screens.

The game has a very beautiful and colourful art style that brings its world and characters to life. It really fits the light-hearted mood the game is going for. I enjoyed every aspect of the game’s visuals. 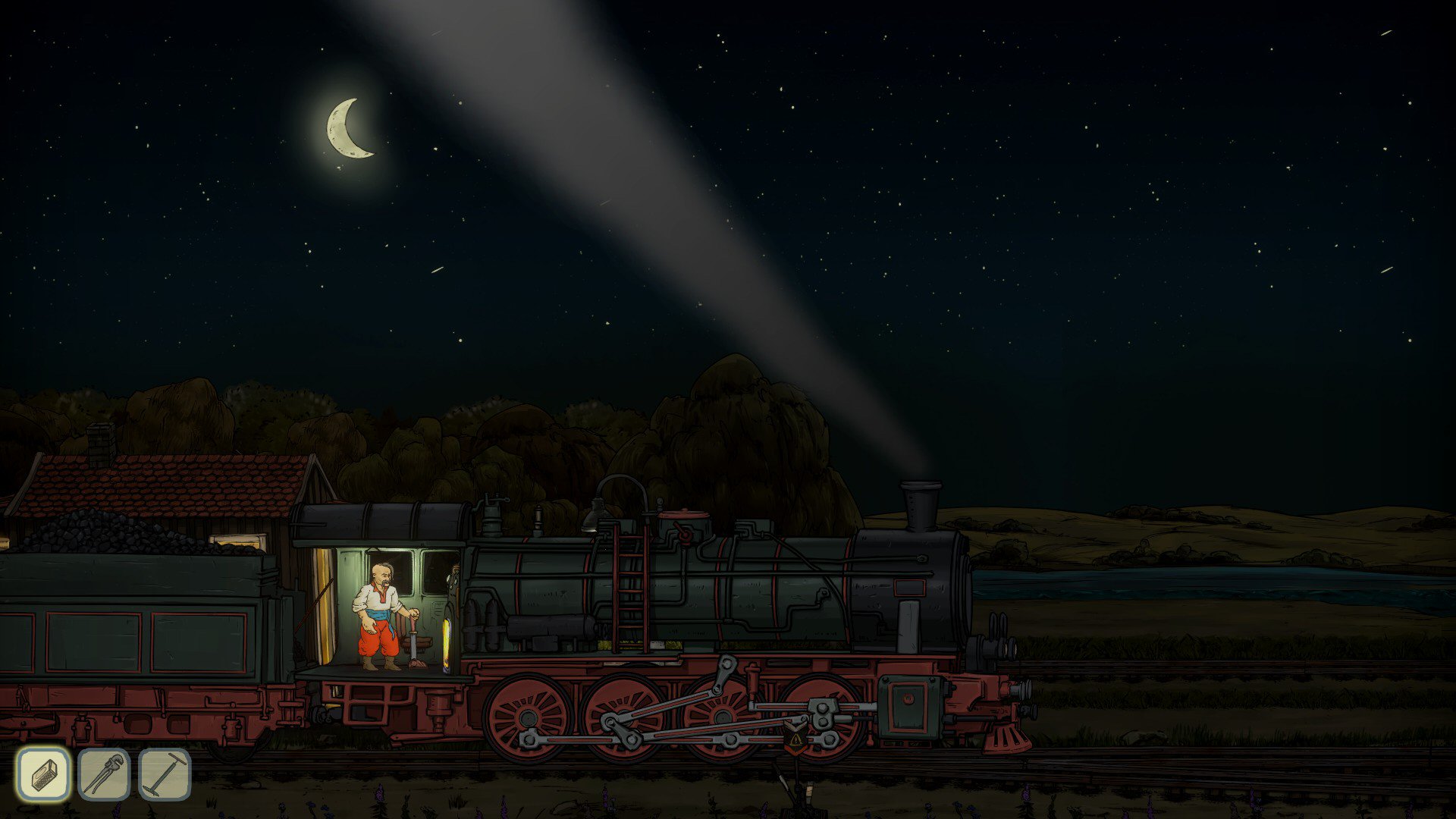 The music is generally decent, although usually in the background. The voice acting is excellent, and everything is pretty much told by one narrator, including the dialogue lines of every character, because it’s presented as though someone is reading the story out to us from a book. The game has Russian and English localisations, but a few others are planned in the near future according to the devs as well. I played it in its native Russian language as I am fluent in it myself, and the way the story is narrated and presented really feels like the old Soviet cartoons, except where we control the main protagonist. 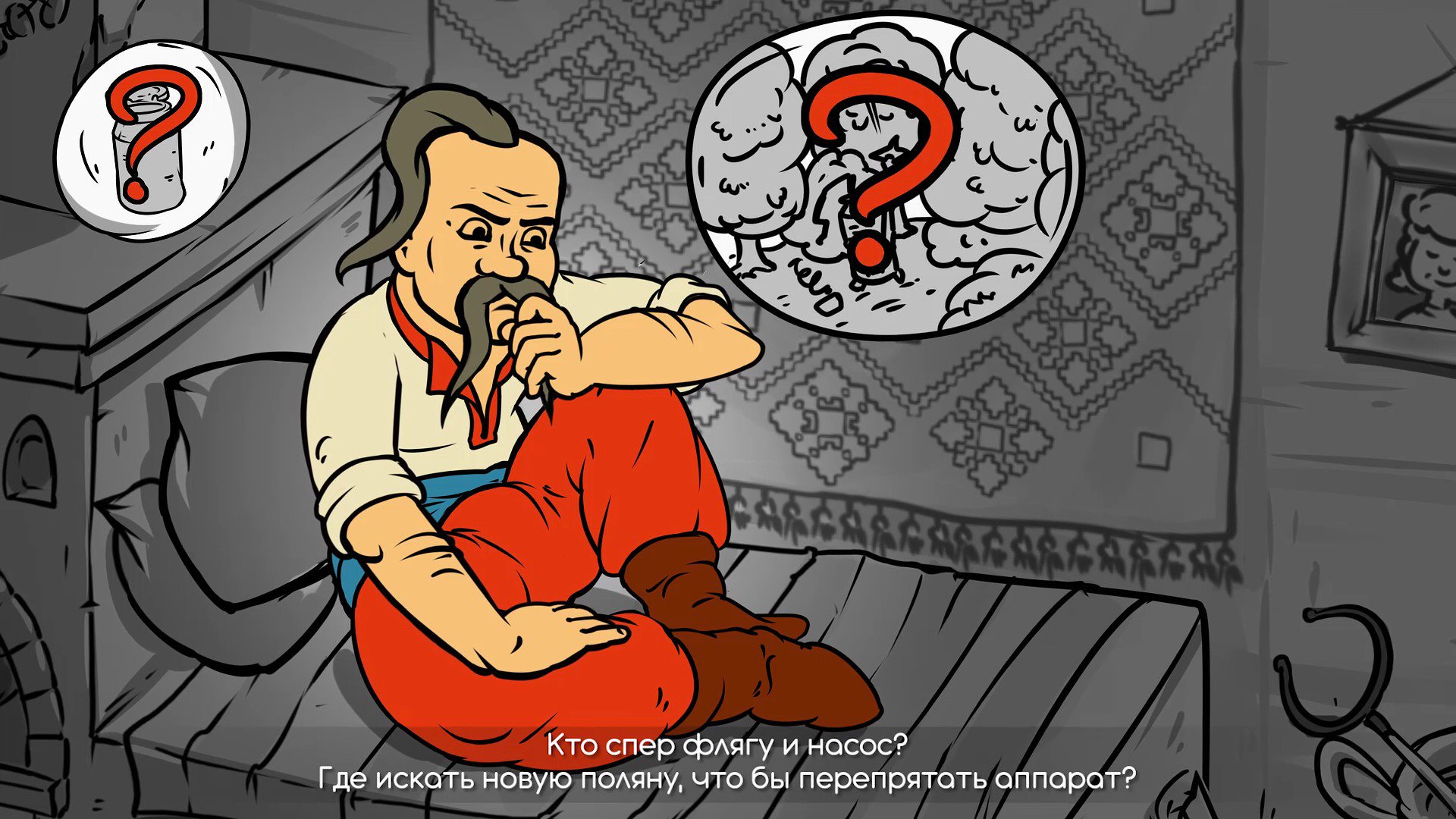 The game uses the autosave feature and doesn’t really let us save whenever. Usually it autosaves during transitions between maps. However, at times the places where it saves are strange. Like at one point, I completed Act 2, watched a short cutscene, and then started Act 3 and decided to stop there for the day. However, upon starting next time, I was back at the last screen of Act 2 again and needed to have the dialogue with NPC there all over again.

Highly Likely is a rather charming and casual game. It’s very simplistic mechanically, but its story and characters are pretty decent. It’s pretty short in length and took me about 4.5 hours to complete fully, so it’s not huge on content. The game’s name is rather strange and doesn’t make much sense and perhaps another title would’ve been more suitable, although this is not a big issue. Generally, I’d recommend it at a discount for those who enjoy casual point and click games or who have an interest in the Ukrainian culture.