Honk! Wow! What a fowl day it has been!

Greg Holgate, an odd British fellow made me review this game. He did not force me to play it nor have we ever met or even spoken online, and he has no idea that he drove me to play a game about a goose. He runs a channel called The Stupendium, writes and performs some pretty odd videogame related music. In one of his songs, “What a Fowl Day” he dresses up in a feathered white suit and acts the part of the goose. It was because of that song I decided to give Untitled Goose Game a whirl.

Untitled Goose Game is not a long game, unless of course you are not very attuned with your inner goose. There are plenty of things to do after you finish the game though so please do not just waddle comfortably back to your pond once you see the credits roll. Instead let’s keep those tail-feathers shaking. What is available after the credits is similar to what you had to do before the credits just with a little extra difficulty added in for interest. There are five main areas you will work through solving puzzles as you make your best attempt to ruin the days of those around you. Some of the puzzles can be a little annoying though, but it is only fair, you are being quite annoying yourself. Honk! 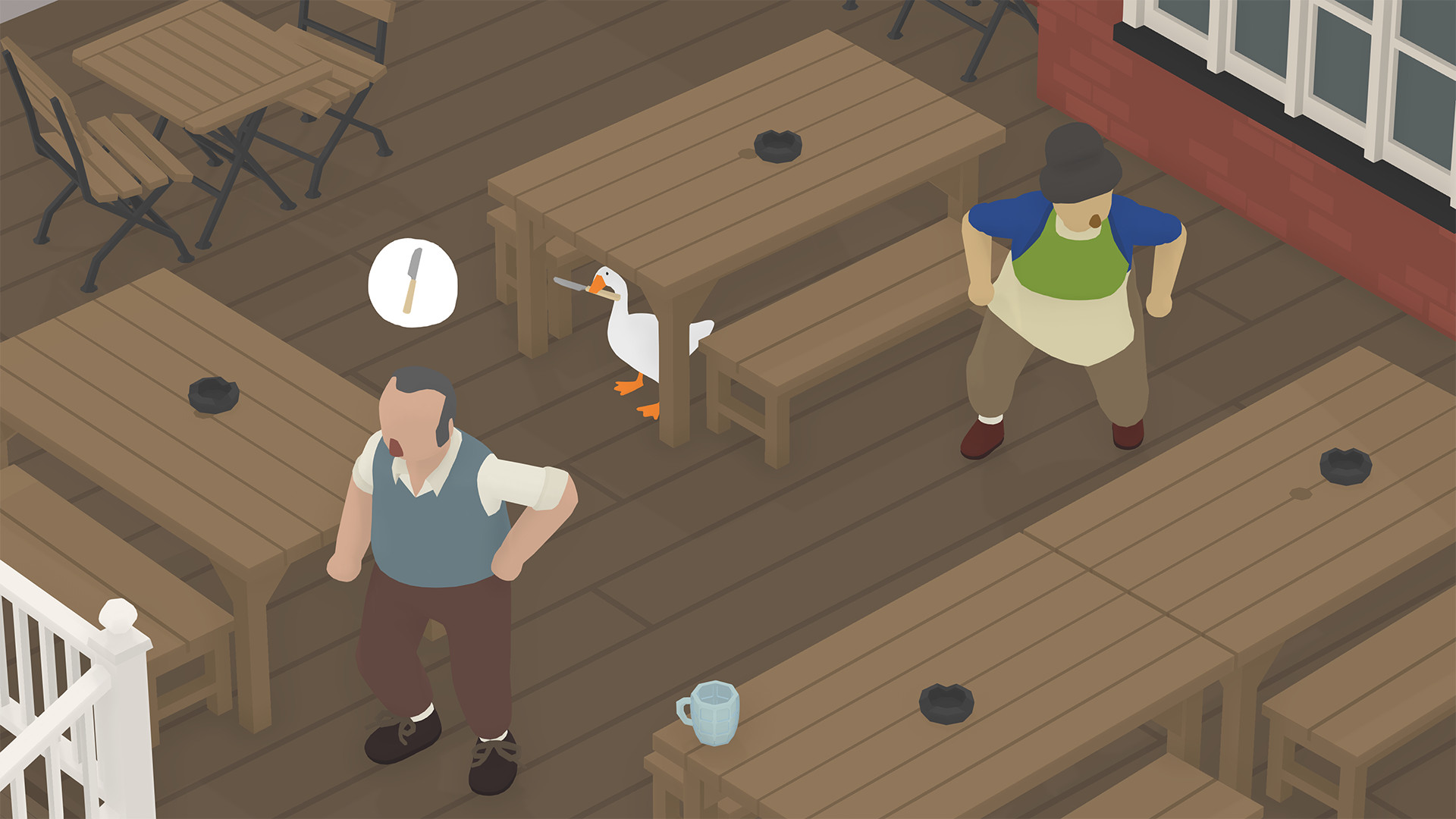 Playing as the majestic white goose, your goal is quite simple: Spread a little mischief as you work your way to the model village and back again. Each area has a set of primary objectives obstructing your progress. While you do not have to do them all, it is imperative that you complete most of these tasks in order for the final objective to pop up, the completion of which will allow your access to the next area. The objectives are simple enough but carrying them out can be quite the challenge. 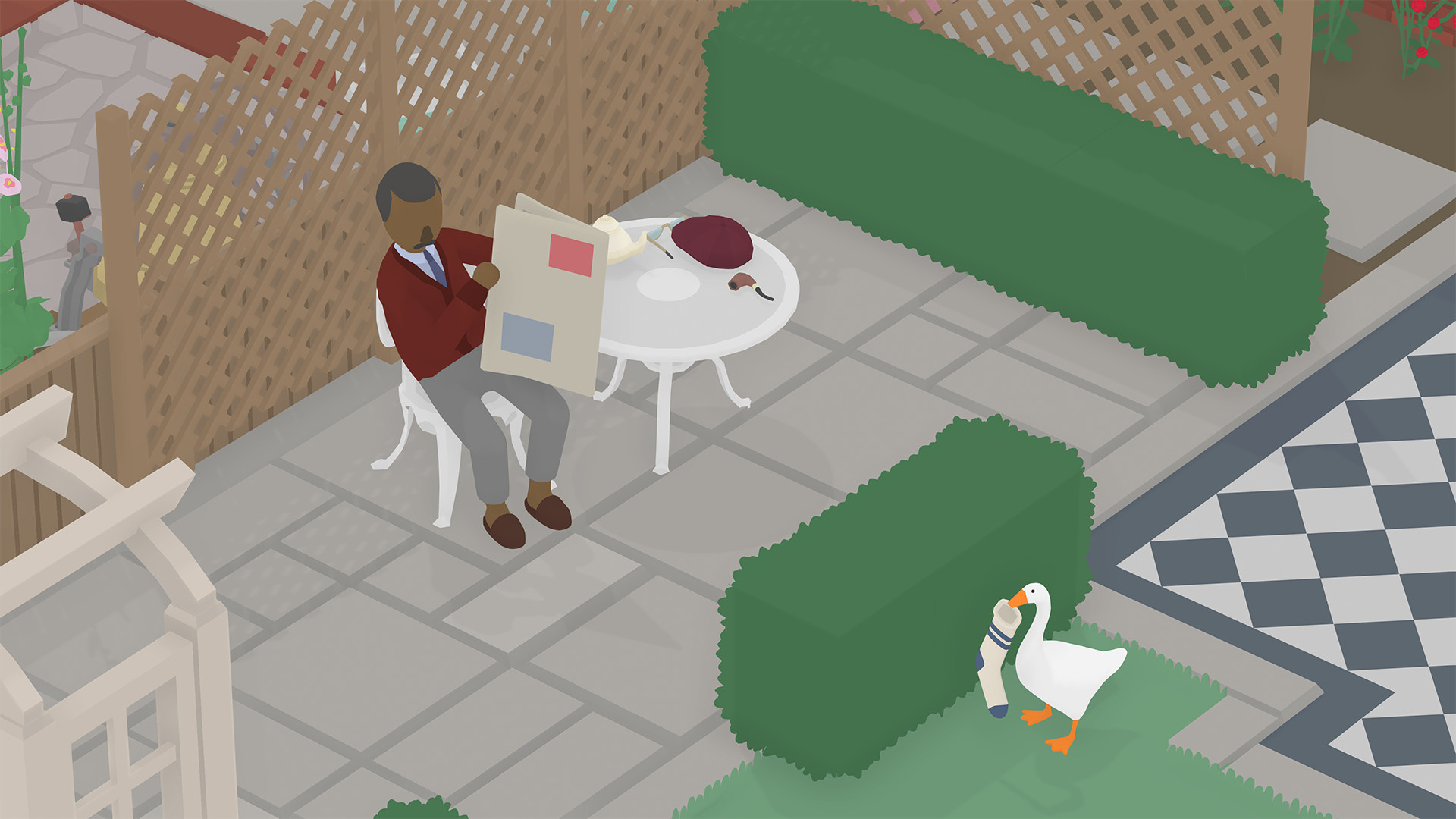 Some of the objectives can get a bit frustrating or down right annoying to complete. A good example of this is when you attempt to do the laundry. There are two ways to access the area to do laundry; one involves sneaking past a man, the other involves you leaving stuff on the ground and hoping the woman does not put it back before you work your way back. Either way, if the man catches you sneaking around, odds are high he will find your stash and no matter how much you honk at him not to, he will slowly put it all back forcing you to start again. What a rotten egg he is. 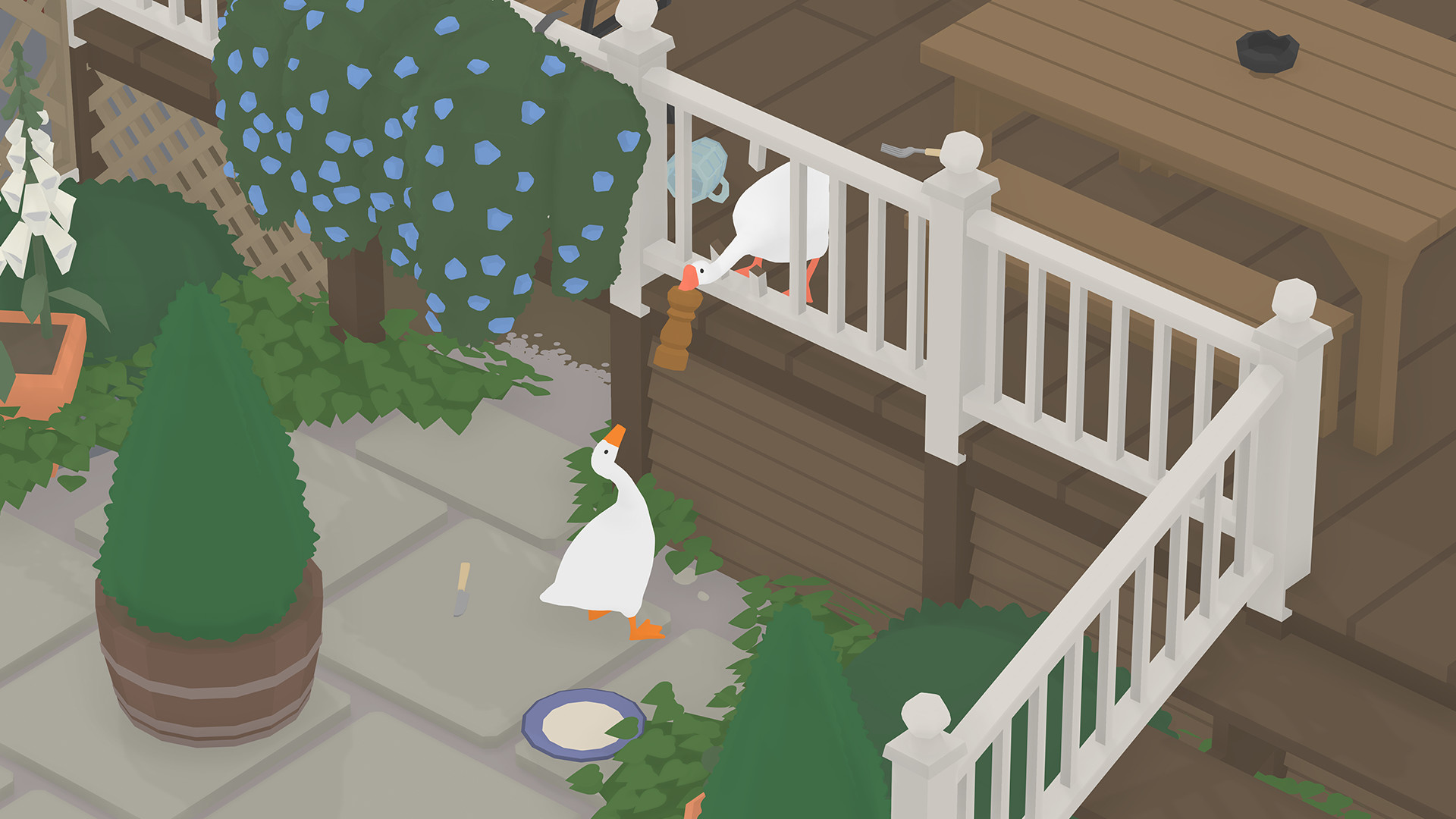 There is also a coop mode available. This provides you with some welcome support but I only have limited experience with that. Having two geese did make it easier though because one could distract or get in the way while the other did actions. 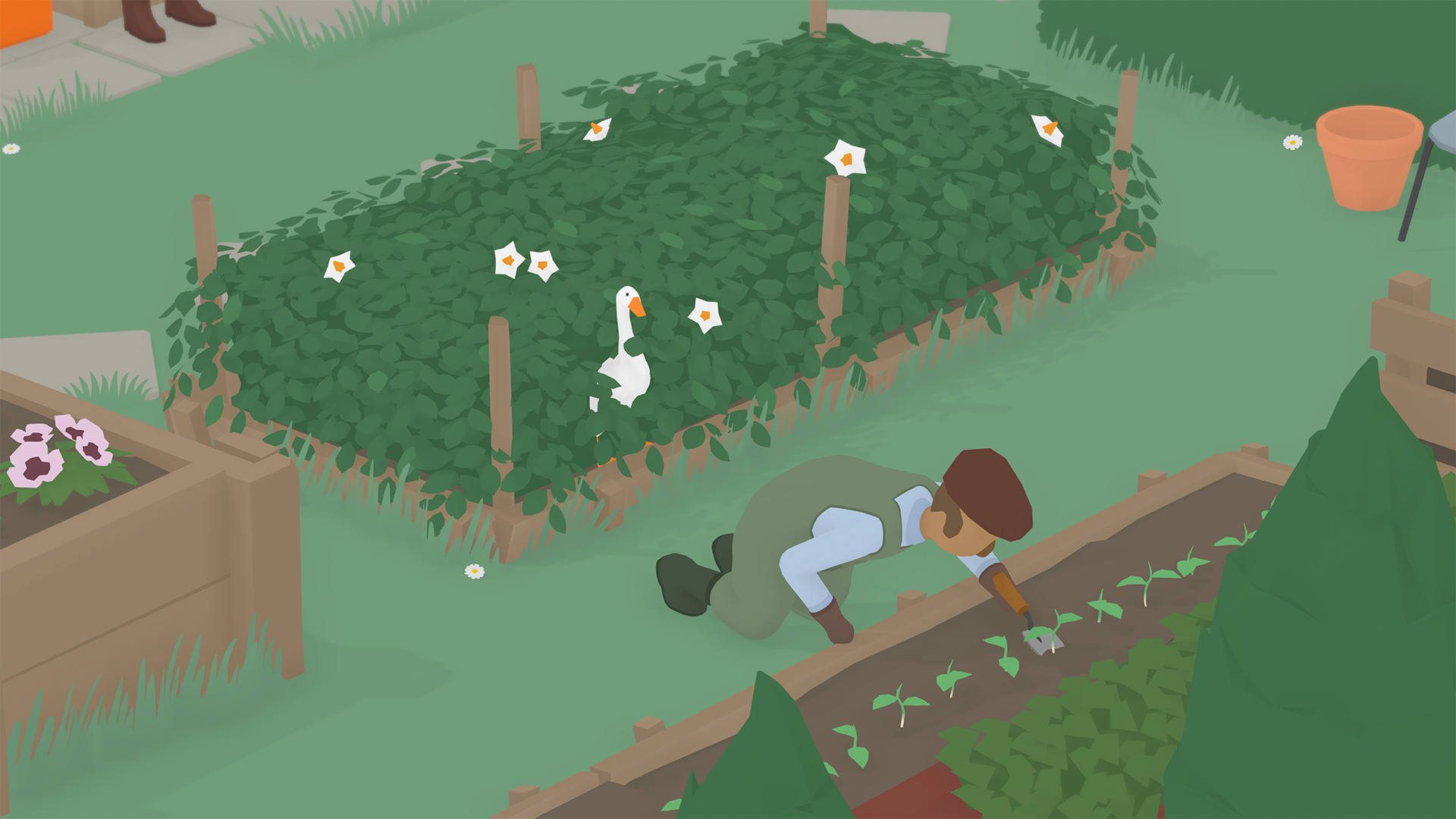 The visuals on this game are actually quite suitable. It is plain and simple much like the townsfolk trying to get on with their lives. The mixes of pastel-like colours with ambient occlusions really are visually appealing. Nothing is more complicated or obtrusive than it needs to be, yet everything is distinct enough that it stands out. It is easy to spot the interactive objects while at the same time they are not highlighted in any way until you are already starting to interact with them. 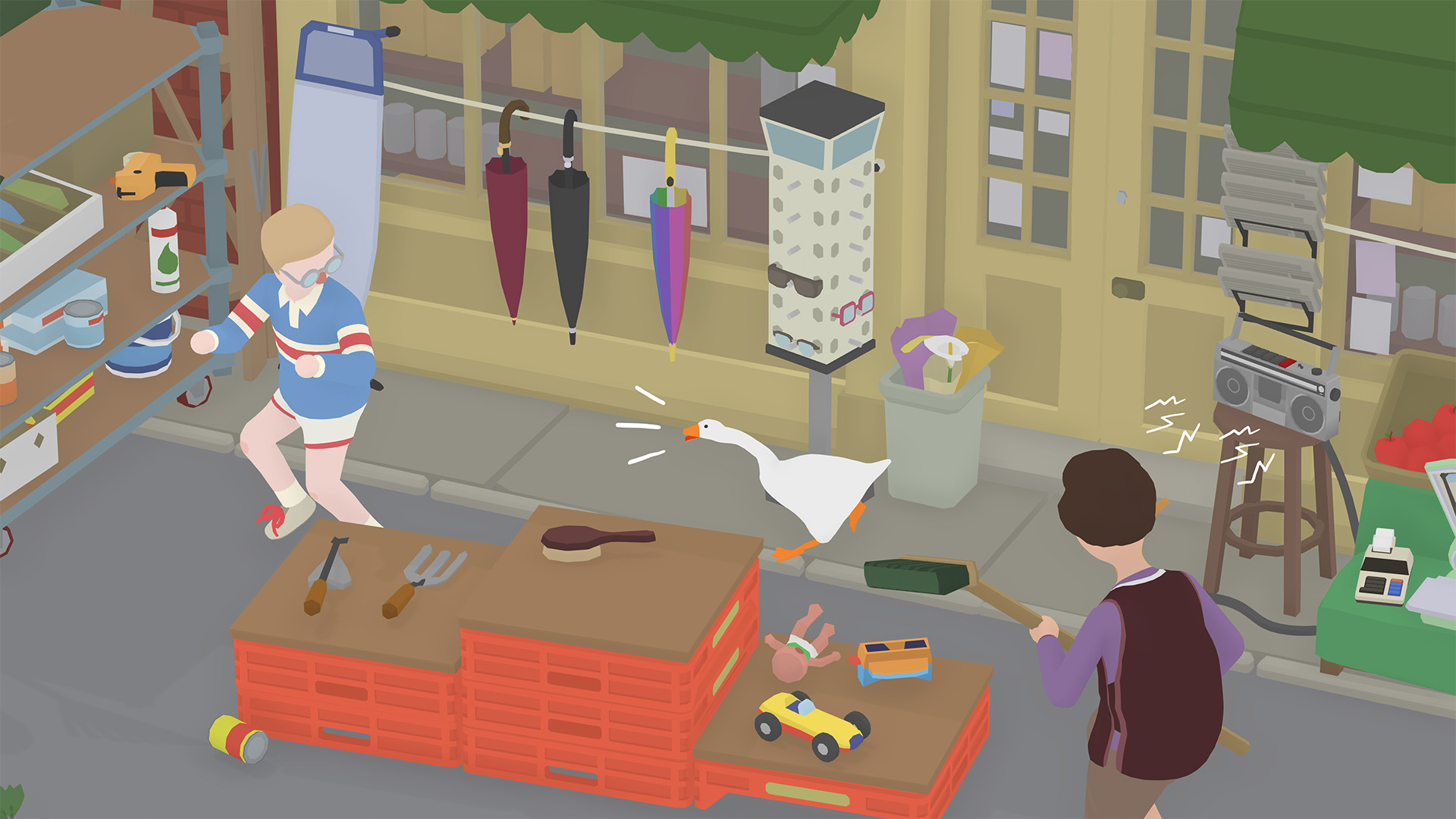 The music in this game is subtle in the background but sets the stage and helps greatly with the atmosphere. The only real spoken word by the protagonist in this game is honk… because… well it is a goose and that is about the extent of their vocabulary other than hissing but the game elected to forgo the hiss (leaving something for the sequel perhaps!). Depending on if something is in your beak or if your beak is stuck in something, your honks will even sound a bit different! The humans in the game do not have much more to say as the game is not really in any spoken language. Their sounds are more of annoyed or surprised exclamations than anything. You will also hear sound effects as you move items around to suit yourself or bump against things as you introduce the community to some of your new goosey improvements. All of it helps with the immersion of the game and the fact you cannot understand the humans is inconsequential, as you are the goose around here and you care not for what the humans think. 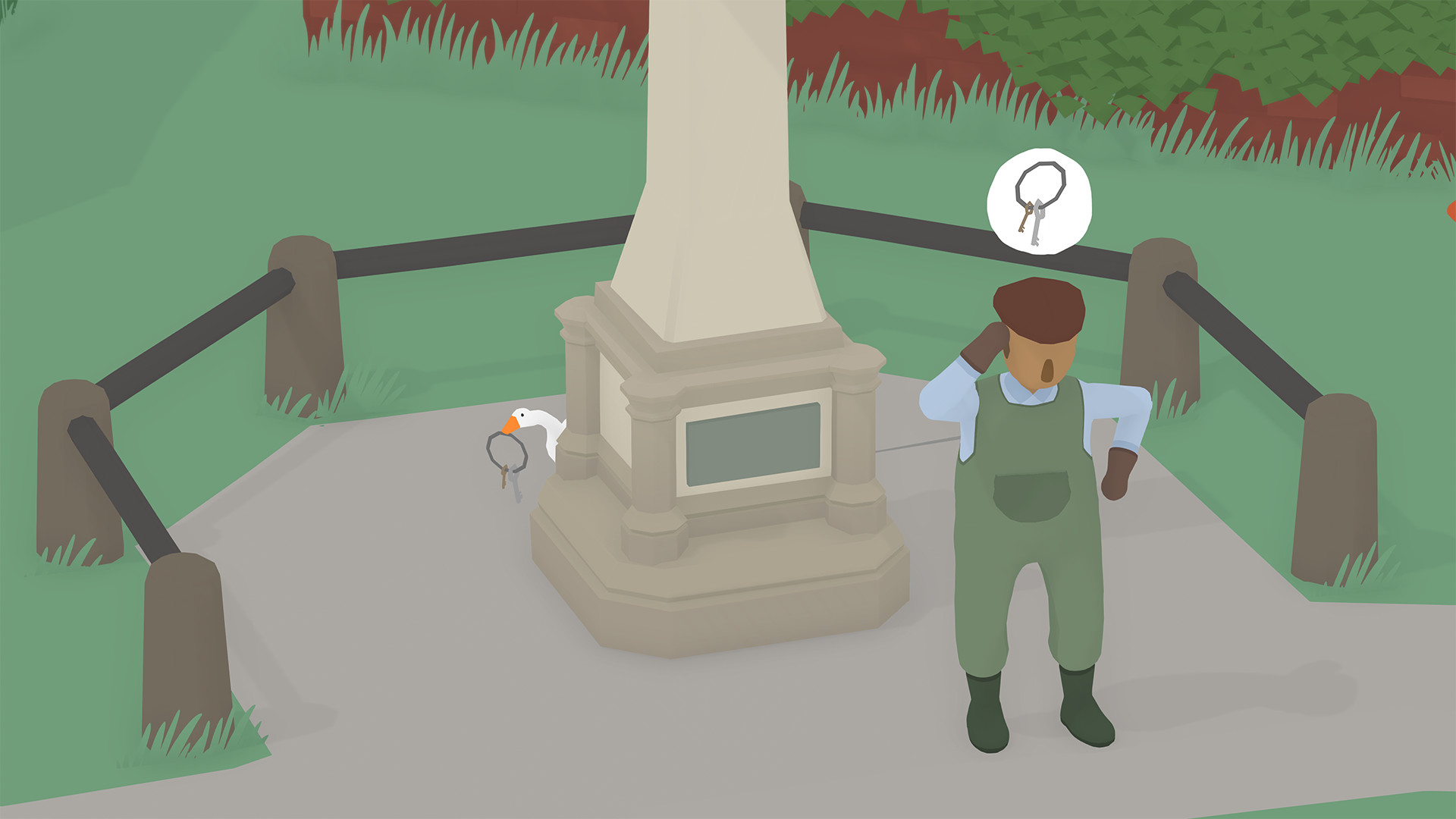 Okay here is the only real complaint I have about the game and it is a decently big one. The controls just do not fit the bill here… which is a shame because it is your bill you use almost exclusively. While the controls themselves are easy enough to understand, they do not always work well. Sometimes you must do minor micro-repositions of yourself in order to be able to pick something up. I am not saying you should be able to pick something up from miles away, but if you are snugged up next to it, and facing it, you should be able to pick it up. Sometimes taking a step in either direction or a step back and forward again will allow you to pick up the item even if you look like you are right back to where you were moments ago. Due to this awkwardness of controls, it led to me having to redo certain elements a few times before it accepted what I was trying to do within the time limit. The human in the area would start pushing you away if you spent too much time there. This issue happened in most areas and on two different systems using different user input devices, so I think it is just an issue with the game rather than me being terrible at it! The same also applies when trying to go under the deck through stealth short cut. Sometimes you would go under there and the goose would seem to get stuck, with neither direction really doing much. Eventually it would seem to work, but not being able to see your character all that well while it is under there prevents you from being able to figure out exactly what is going on. This was particularly troublesome with the shortcut near the man at the gate. 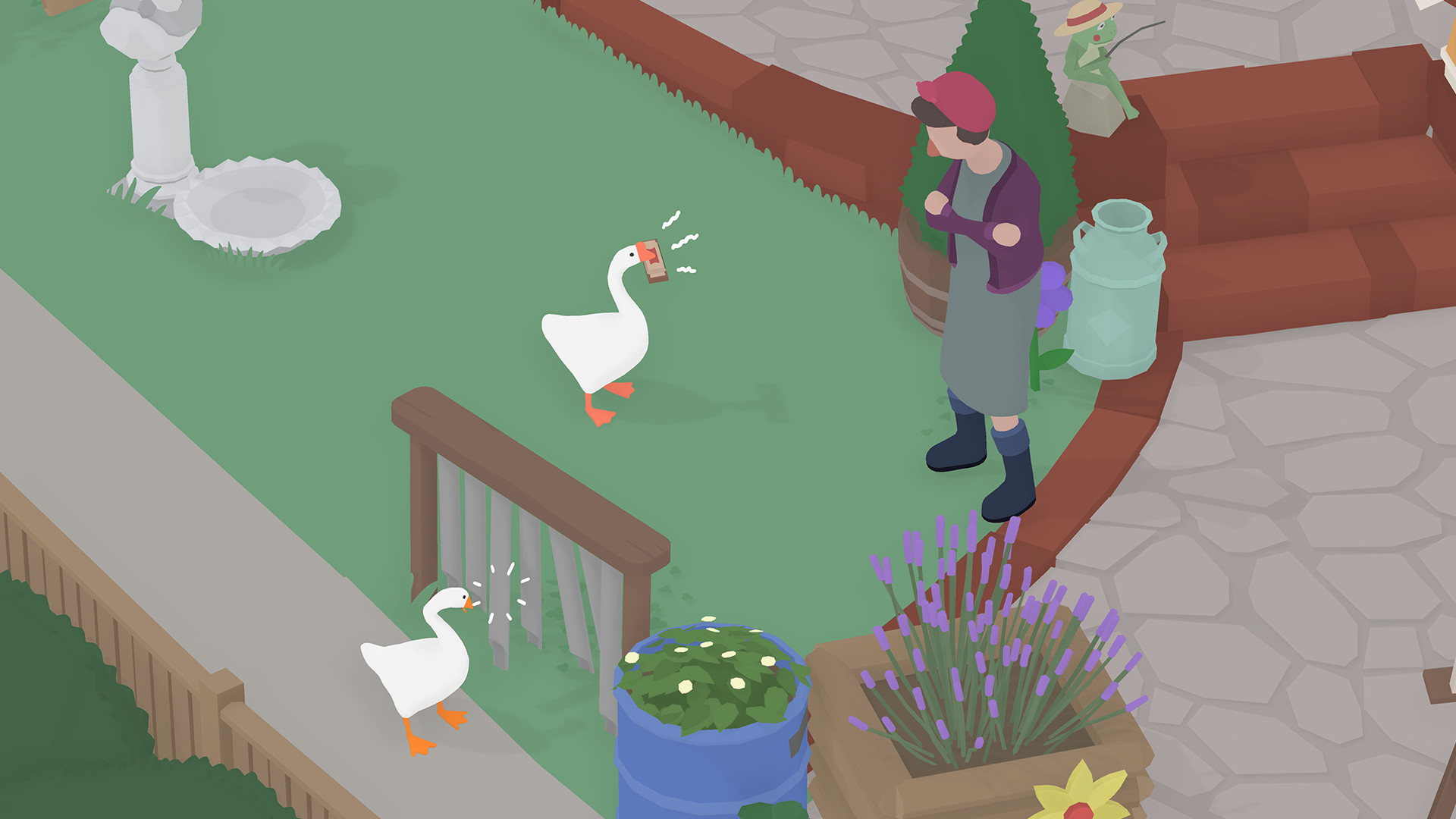 So, should you pick up Untitled Goose Game? I am a bit conflicted here. House House (that’s the Developer!) did a great job getting the visuals and sounds right but the controls did get quite painful at times. The game is kind of short and once you know how to solve the problems, their replay value is kind of low. The additional tasks that are available after completing the main “story” and seeing the credits roll (technically they are available at any time, but the game hides them from you until then) do help extend your gameplay for a bit. With a little control refinement, I could see this game being quite enjoyable for many different types of gamers. Playing as the goose and being a total jerk to the innocent towns folk who really did nothing to deserve it was quite a refreshing change of pace. It is always fun to get a chance to play the part of the villain in games rather than being yet another generic hero off to save a generic land. Some of the tasks did get a bit tedious though due to needing a an excessive number of elements to be in the right place and remain in the right place until you are credited for completing the entire task rather than just one part of it. Unfortunately, if you get caught and the human spots your hoard of ill-gotten goods, they will dismantle your efforts and you will have to start over. It would be okay if it were because you messed up, but when you had to repeat them simply because the controls were not cooperative enough it led to quite a bit of frustration especially when you wanted to get cracking. I will give this game a Save for Later. It is a great concept and playing as the goose spreading mischief was a lot of fun, the visuals were great for the kind of game it is, and the music was quite suitable. It was only the user interface woes and the excessive repetition of goals (that collect a bunch of items in one spot quest happens in four of the five zones you visit) that reduced this from a Save to a Save for Later. Honk!