An Abstract View of the Presidential Job

Hot on the heels of something I shan’t dare to mention, Suzerain puts the player into the job of the most powerful man in the country. Join Anton Rayne’s first 4 years of presidency and help decide the future of him and the fictional country of Sordland. Unfortunately, it’s not as easy as you would think. Suzerain is something akin to a political Visual Novel since it has a linear story that moves forward while you make decisions and activate flags. Though there are other aspects like stats that influence your to-be-legacy as a president.

The Beginning of Anton Rayne 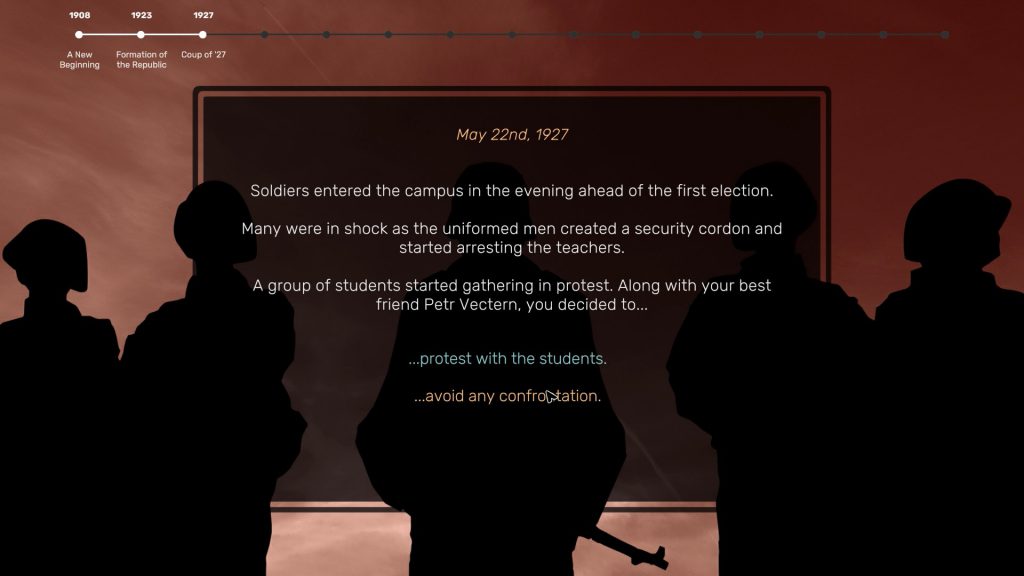 Suzerain starts with you deciding Anton Rayne’s backstory like whether he comes from a low income, middle or wealthy class. You also have control over some of his major decisions in the tumultuous times of Sordland. A Civil War, a Coup that ends it, the conception of a constitution, and more. Anton makes it through everything and keeps rising to higher positions until he ultimately becomes the new president of a country that is deep in recession.

The First Term: Difficult choices ahead 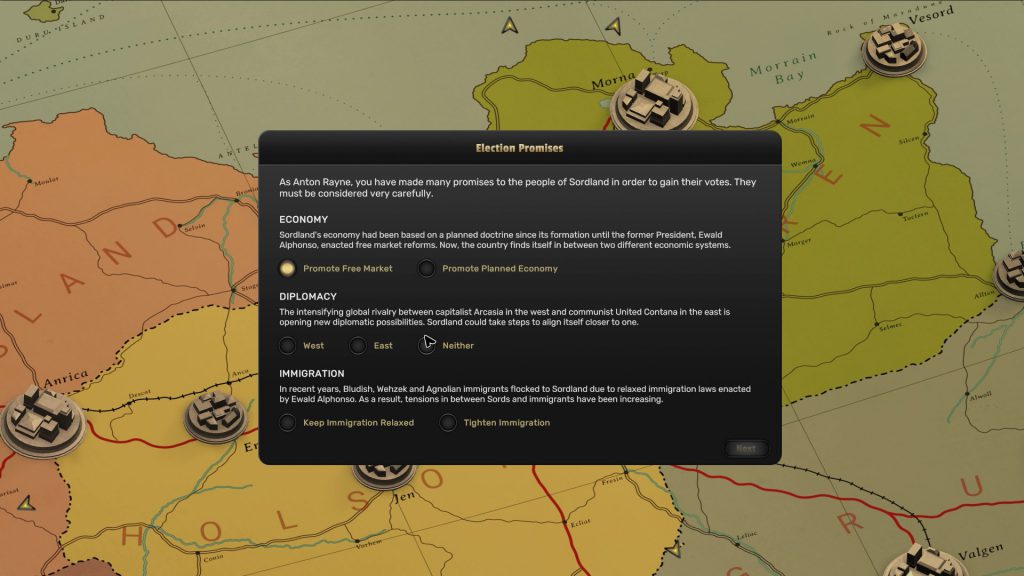 This is where everything will play out. You will immediately set your campaign promises. Those are limited to a few things such as Education or Health and many more. While it doesn’t seem that important in the beginning, it loosely dictates your 4 yearlong path as the president because your constituents are holding onto those.
From there on there will be set events with multiple short plot points that appear here and then with the presidency holding everything together like glue. One of them is neighboring countries for example with one being always aggressive that could probably even escalate into a war so your decisions will affect the course of the country. Another interesting plot is Anon’s family and the effects of his presidency on them. 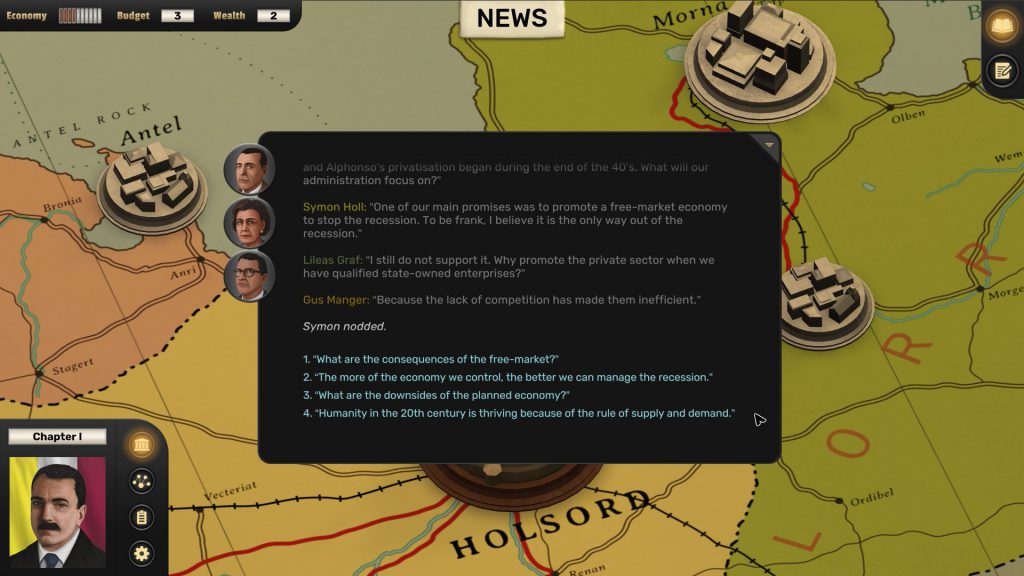 Most interactions are just with your cabinet members who’ll be a briefing and assist you with decisions. There are many paths and many events to find so the potential for multiple playthroughs is there.

The World of Suzerain 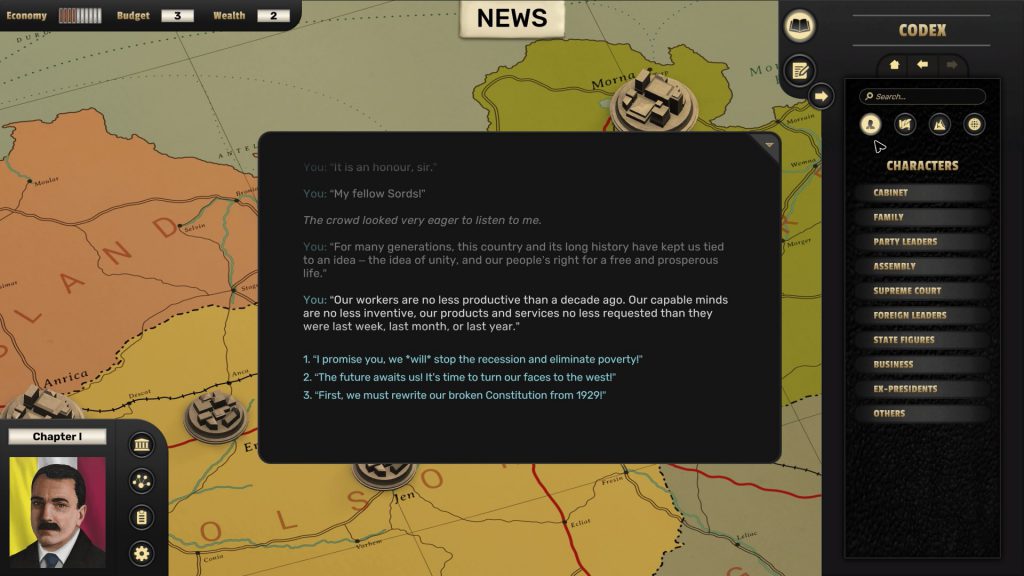 Not everything is as simple as seems. There’s a whole Codex that you can call up to dig through for information about the different events, countries, people, and much more. This has its pros and cons. On a positive note, every piece of information is at your fingertips. The other side of the coin is that it’s not integrated into the story as it expects you to know that information.
The good news is that the most vital information is often mentioned in the story to reduce the need to stop the story dead in its tracks. 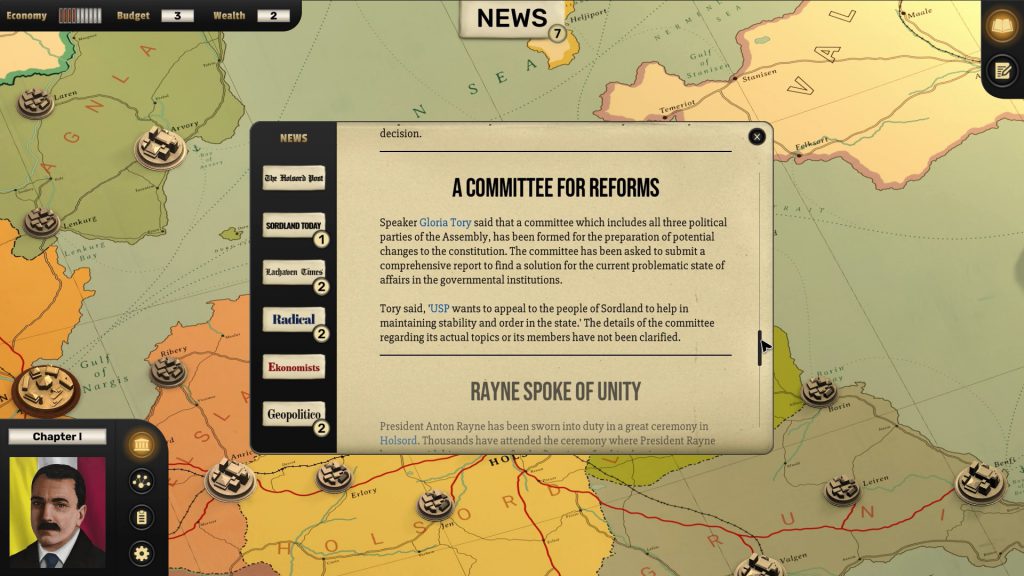 There are also multiple newspapers and news coming from cities to show the effects of your decisions and it helps to breathe some life into it.

The story of Anton Rayne’s First Term is strongly compressed due to the many issues he has to take on such as Women’s Rights, Religion, disputes with another country, federal investments, and so on. All your decisions will culminate in different outcomes. The characters are fixed in the way they are since they are already past any chance of growth and that’s not the point of the story. They have their roles to play, which they do.
It doesn’t mean they have no details. The writing takes into account little things such as their demeanor making them not look out of place and more lived in. Considering that the whole story is just a spotlight on different periods, the writing does its job in selling the tumultuous Sordland and the slippery parties involved.

There’s more to it than simple decisions. Suzerain also offers a Macro view on the current circumstances such as support of the parties, resources, and personal wealth. Suffice to say that the resources are extremely tight and you will have to make difficult decisions that will affect your plans in the future.
Be too lavish with your spending and you’ll soon run out of steam. You could even say that the Government funds are frustratingly low, which puts you in a position stifling your actions. 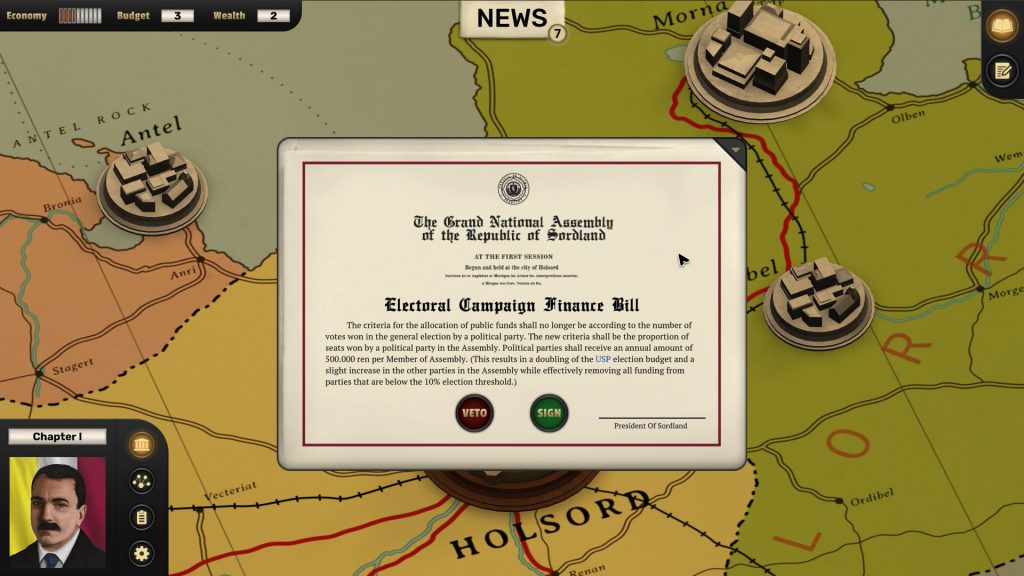 Deciding on government actions isn’t the only thing for you to do. Over time, you get some bills thrown in from the congress for you to either Sign or Veto such as taxing smoking. Then there are some other decisions to make such as banning a party.
The circumstances are going to put some pressure on you as the decisions will affect their opinion of you. There might even be times where you look back at your decisions and come to the conclusion that it’s not something you would normally do. 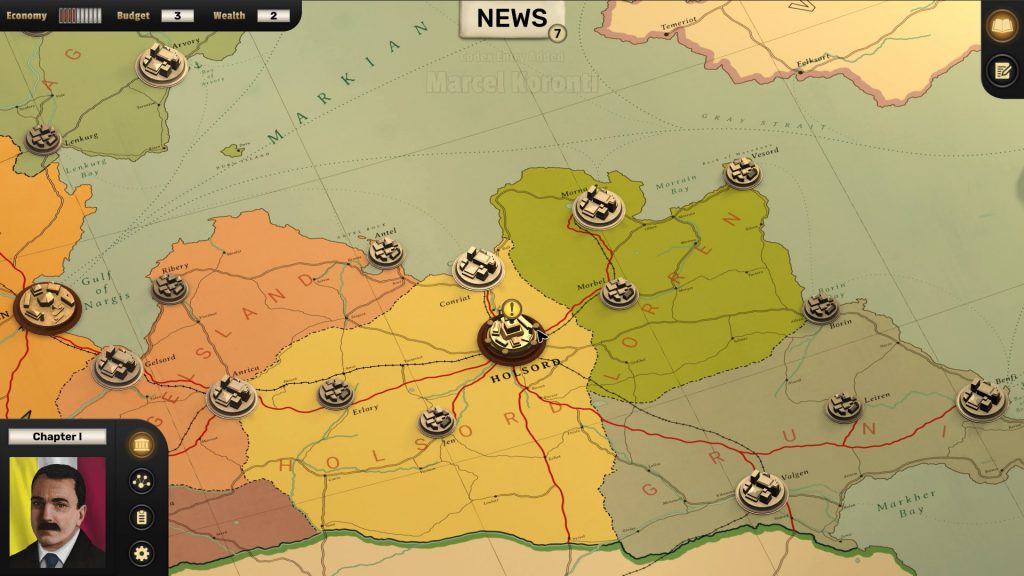 The whole game plays out on the map of Sordland with multiple cities that come with regional news and other parties in the surroundings. It’s simple but I often found it too inconvenient as it is right now because you have to use a mouse and keyboard to play. Having an option of cutting out the mouse of the equation would make it at least more convenient to play. While there are hidden shortcuts such as N-Key for news I couldn’t find much more. If there is, they should make it more apparent.

Conversations are a Your-Miles-May-Vary thing and maybe one of the biggest challenges of the game. That’s when the rubber hits the road. The decisions are limited and sometimes too limited. You’ll very likely meet moments where you will say “Wait, that’s not really what I want” but the game will not even offer you the compromise you’d want. It doesn’t come up that often but that also depends on the player. 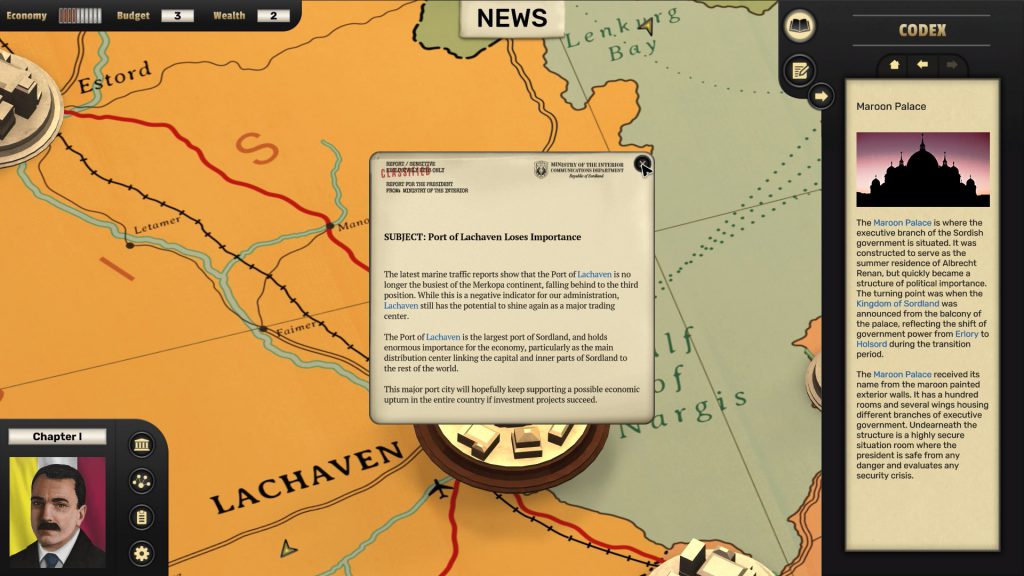 The visuals are minimalistic with very little artwork, except character portrait. The Codex has the most when it comes to it. The game does bear resemblance to a board game in this regard.
The minimalistic design isn’t necessarily bad and fits the premise. Though I do have to criticize the small text size and I had to squint a little bit to read it. Compare it to the rest of the picture and you can see there’s some unused screen real estate.

There are just a few sound effects to add to the atmosphere. The music is very somber and fits the dire situation of Sordland.

I found Suzerain to be an interesting game that puts you into a simplified presidency with many hard decisions thrown in front of you. It’s a good compromise and reduces the complexity to a point where anybody should be able to play it without making you throw up your hands within minutes.
Considering the more than reasonable pricing and playtime of about 5 hours per playthrough that easily amounts to over 10 hours, it gets a very comfortable Save.