A metroidvania platformer that has us delve into various dream worlds.

The Premise, Story and Setting

A metroidvania style platformer where we explore different dream worlds full of strange creatures and a somewhat mysterious plot. Our main character wakes up from a dream in some kind of lab and finds other individuals who are also stuck in a slumber in this lab. He attempts to enter their dreams and to pull them out. Each dream world is different and has its own unique environments and enemies. What is this lab and why we’re there is unclear.

The story-telling is quite minimalistic. There aren’t many characters or cutscenes here and we’re not told anything when the game starts. We start to uncover things bit by bit as we go around exploring the lab and the dream worlds.

This is a very standard metroidvania game. The whole gameplay is a 2D sidescrolling platformer with big areas that require a lot of exploration. Many parts of those areas are gated off initially that require some sort of ability that can be found as we make progress through the game. There’s a big number and variety of different environments here, ranging from outdoors areas to dungeons and caves.

In addition to exploring the areas, we encounter many traps and enemies. Traps require us to use our abilities to get through, and some of those require abilities that we don’t have at the start. Enemies come in a variety of shapes and sizes and can differ quite drastically from area to area. 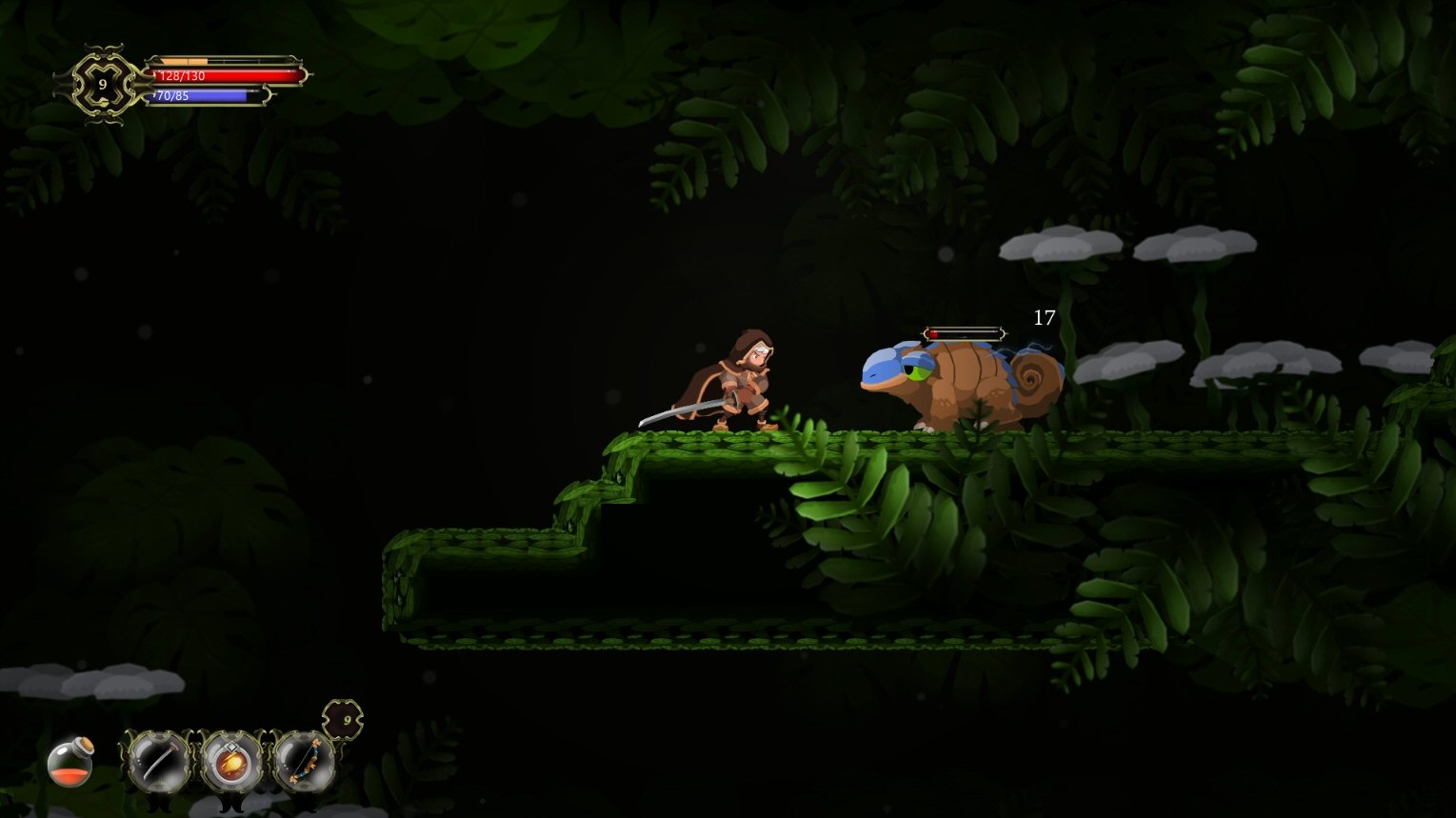 To deal with the enemies, we have our standard melee weapons, ranged weapons, and magical spells. We can equip two of each on our character and we can change between the equips at any time. All of these drop frequently from slain enemies and from treasure chests in the dungeons. They can also be gotten from merchants that we come across in the dungeons. 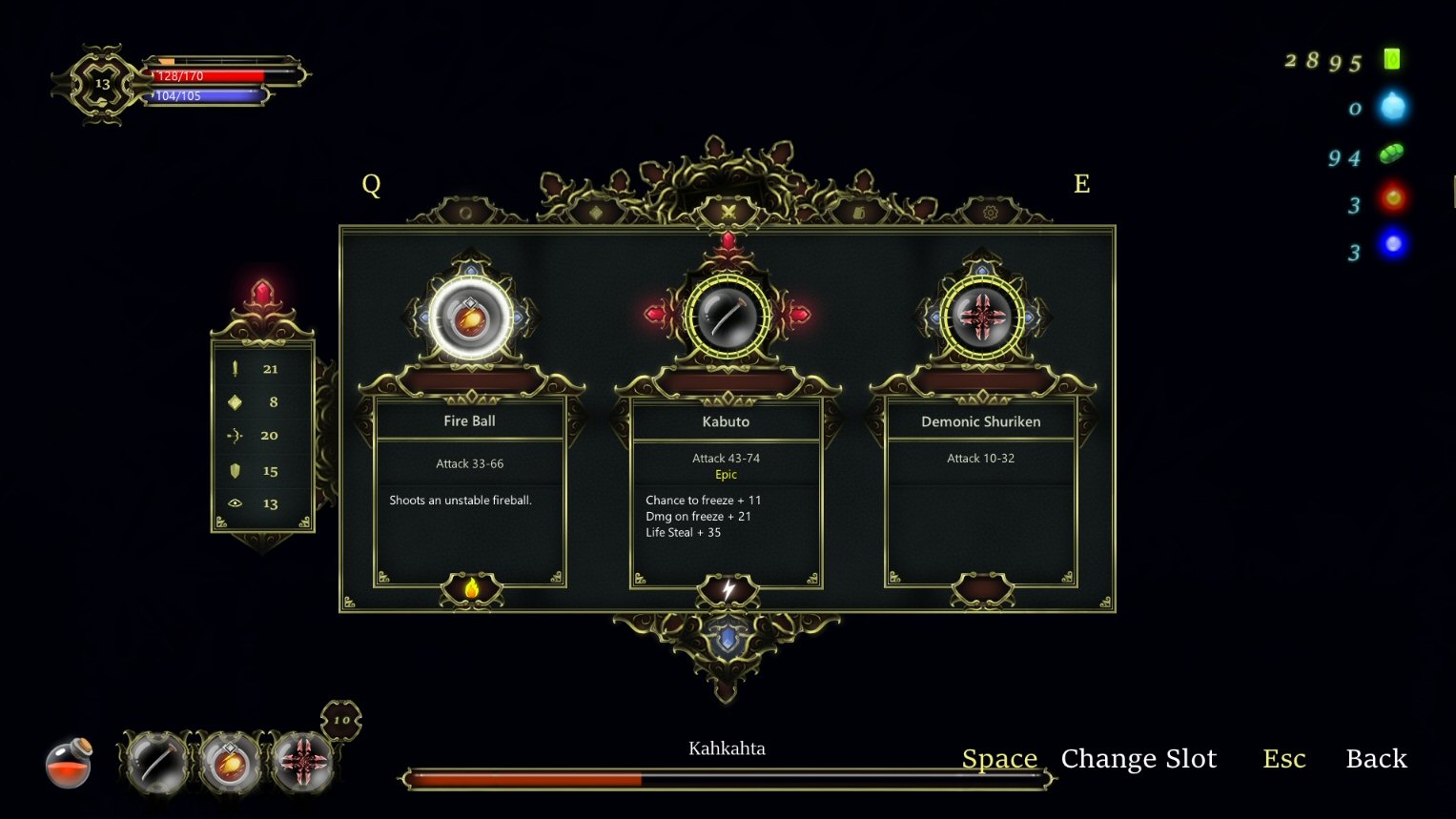 The game has a number of RPG elements too, as our character levels up and improves his stats the more monsters he kills. We also get to find glyphs and different types of upgrade items, all of which play a role in some way. The glyphs can be equipped to provide bonuses to certain aspects, such as increasing damage with one-handed weapons or reducing mana cost of magic. The upgrade items allow us to upgrade our weapons, health, or mana when we visit certain NPCs in the game.

We also have a refillable health potion with us at all times. This is quite handy if we’re running low on health while in the dungeons. Though the potion is limited and we can only refill it at save points, so our HP is not infinite and some care is still needed when traversing the dungeons.

The game has boss fights in some areas, defeating which eventually grants us some new ability or other way of unlocking new areas, as is common in metroidvanias. I played on the Easy difficulty, so most of the bosses I came across were pretty straight-forward in this mode. Most times they spam the same pattern of attacks and abilities that repeats itself, so they’re not tricky to learn. 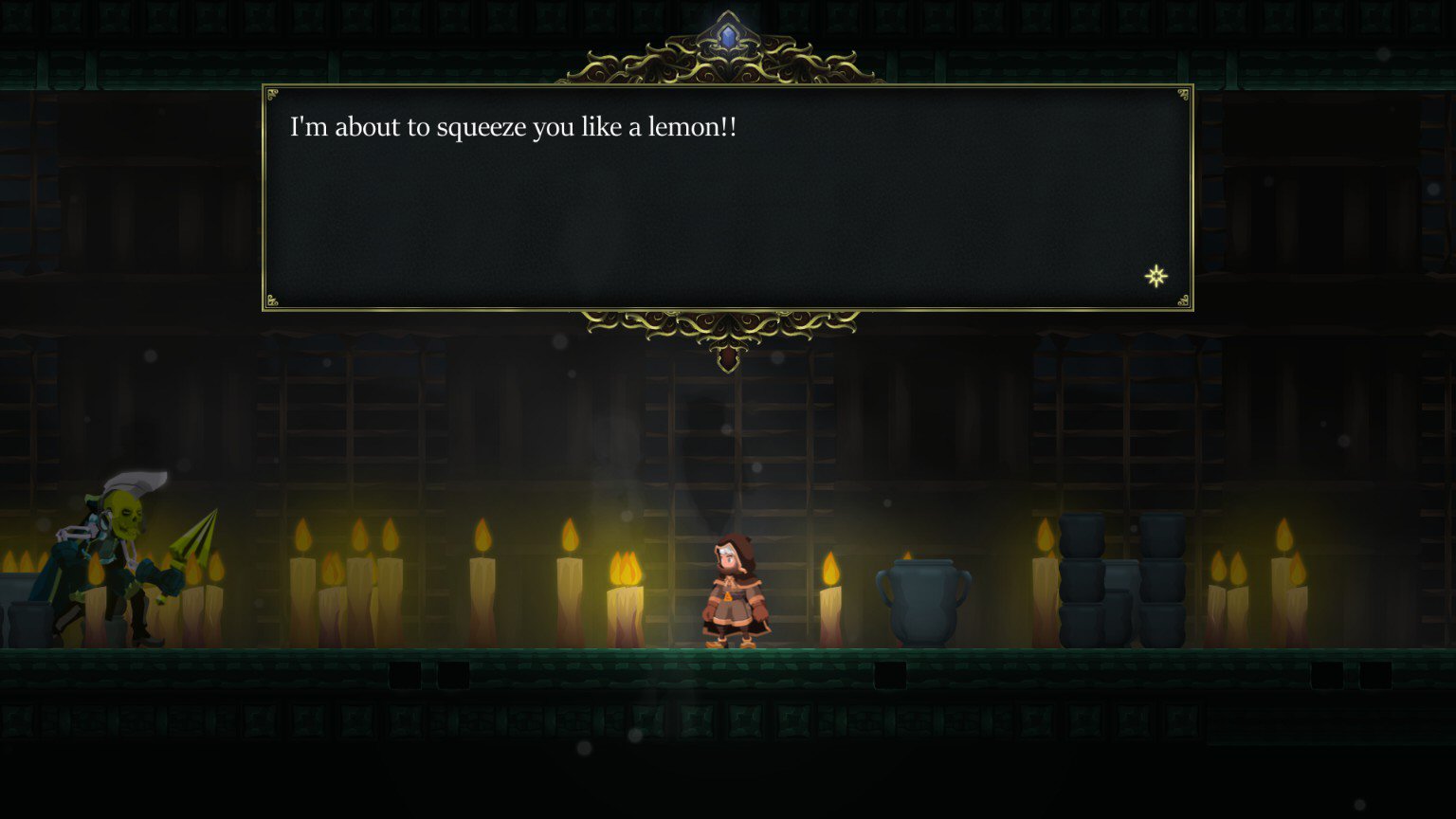 The game generally flows well. The exploration and overcoming of different obstacles are mixed in nicely with combat and it captures the soul of metroidvanias well. It doesn’t, however, add anything new to the genre. Metroidvanias have a certain charm to them with the way they mix exploration with fighting and character progression, but in my humble view the genre hasn’t evolved much from the days of Super Metroid and Castlevania: Symphony of the Night, and most games of this genre start to feel very much alike in their gameplay lately.

This is a pretty lengthy game too, and so over time can feel a bit repetitive, especially with all the backtracking going on. But on the other hand, it can appeal to those players who love exploring every nook and cranny and have a completionist soul inside of themselves. 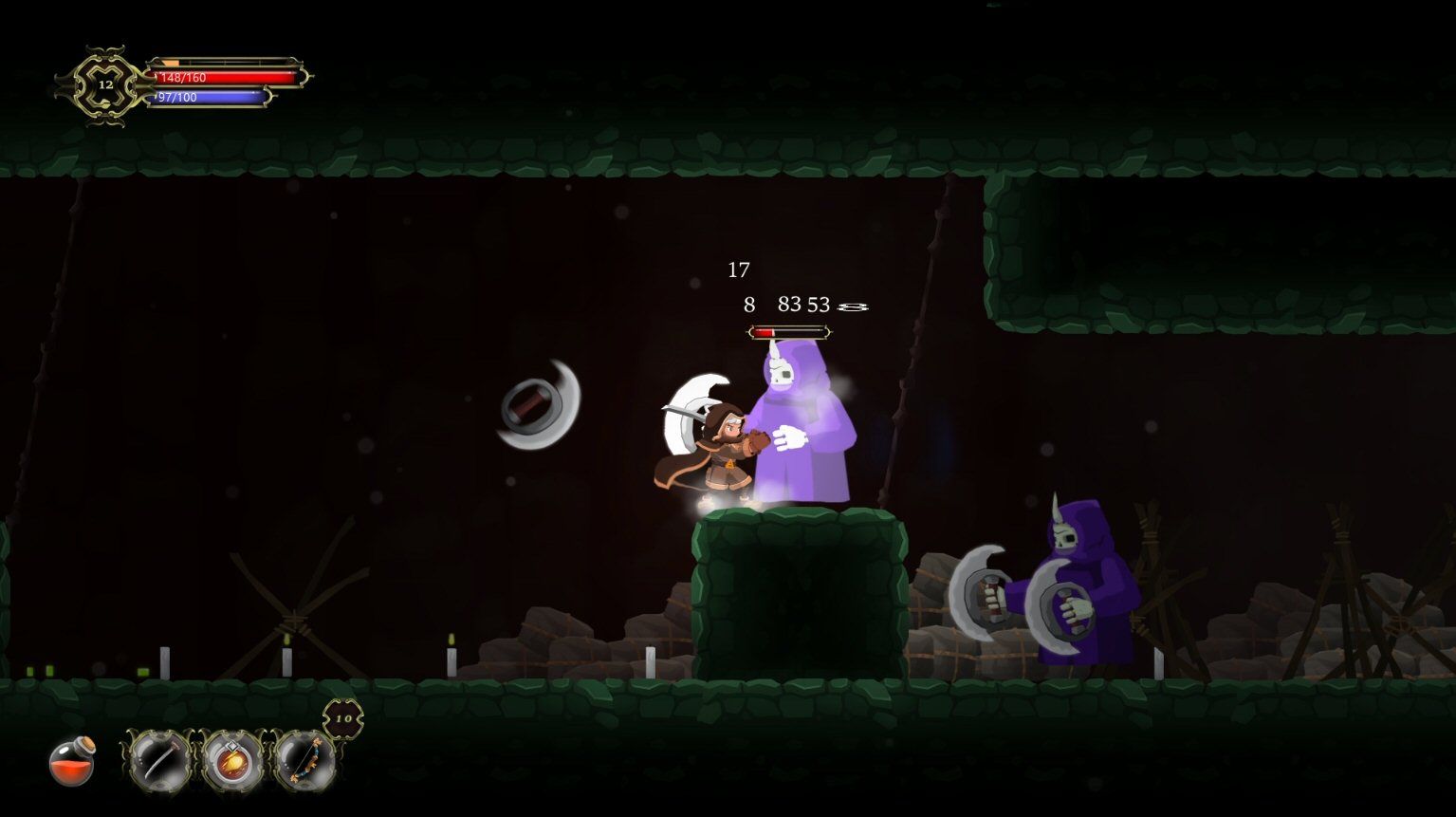 Reasonably nice visuals with a more cartoony style. Some of the locations can feel pretty atmospheric with a decent environment art. Nice-looking UI as well to communicate information to the players and to allow for an easy navigation in the menues, although some of the menues do look confusing at first and don’t explain what they’re for, but with time it all starts to make sense. 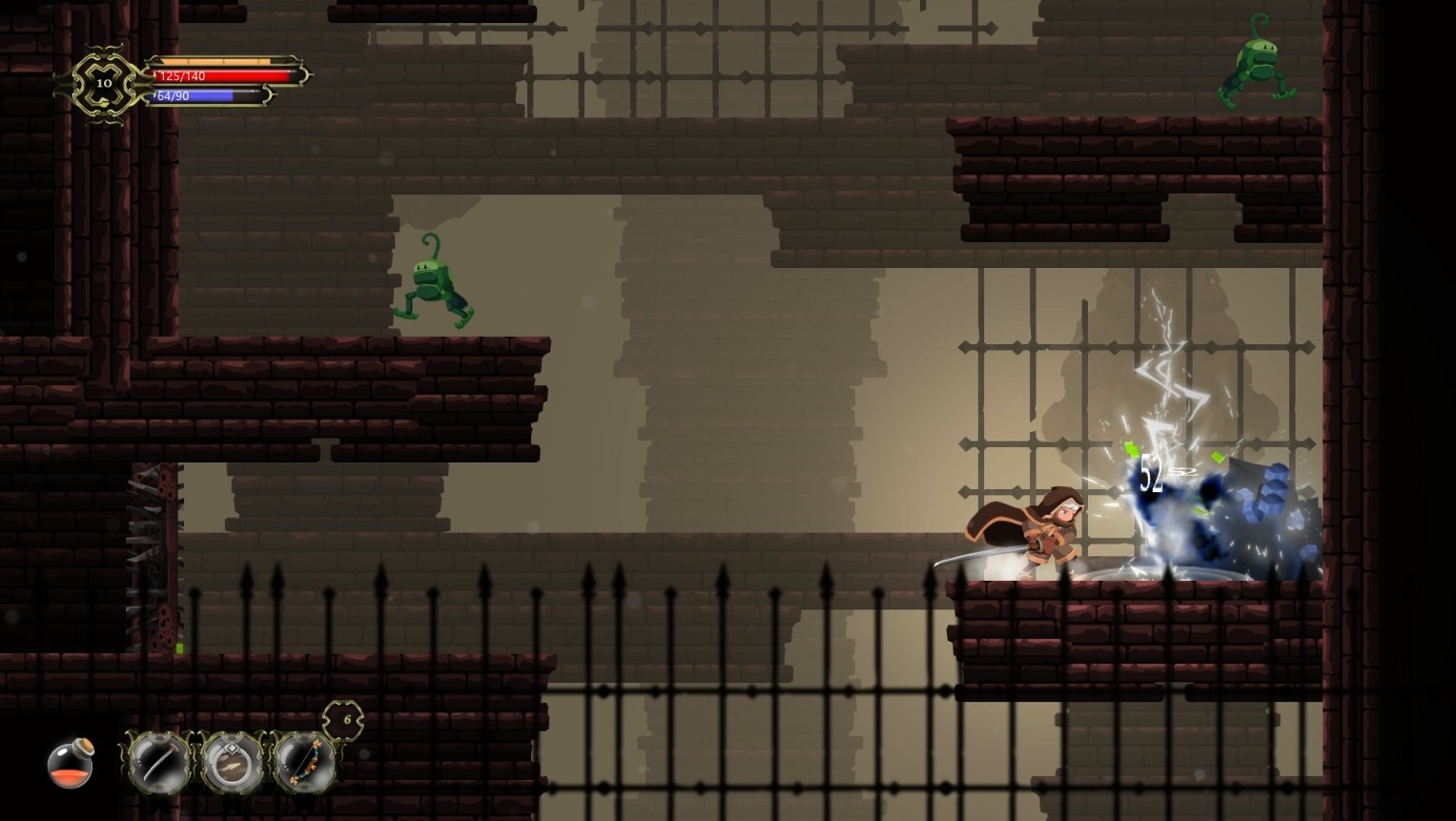 Music is decent, although doesn’t particularly stand out. In some locations it’s very ambient, so it’s more designed to set a tense atmosphere rather than to allow for a more upbeat experience. Sound effects are pretty good and improve the feel of the game nicely, making each hit and each magic spell feel impactful.

Generally the controls are smooth and are very similar to most metroidvania platformers, such as allowing you to double jump, attack in the air, and over the course of the game also other things, such as wall-jumping. The game works very well when played on a gamepad. I did, however, find one aspect of controls to be quite inconvenient. I’ve not found a way to swap between my equipped weapons and spells while mid-action. For each time I wanted to swap between my two sets of melee weapons, ranged weapons, or magic spells, I had to go into the equipment menu and do it there, which can ruin the flow of the game a bit.

Generally, Endless Memories is a pretty decent metroidvania platformer with fun combat and exploration and various RPG elements, although it feels like “just another metroidvania” title and doesn’t do anything different to set itself apart. Its story-telling is very minimalistic, so for the entirety of the game it’s just the gameplay that will be carrying your interest forward, and its gameplay can feel repetitive, especially with frequent backtracking and overly large areas to explore. I would recommend it to those who really love metroidvania games and don’t mind another game that’s more of the same.