Raji: An Ancient Epic is a visually stunning game in India – while definitely worth the sightseeing, the game itself has little to add.

Raji: An Ancient Epic is an action adventure game set in India – its biggest draw, given its rich culture (in architecture, music, mythology and so on) and rare appearance in video games. Gameplay-wise, it is basically an isometric Prince of Persia (minus the Time control), and structure-wise sits somewhere between Brothers: A Tale of Two Sons and Hob. I’ll write a bit more about this spectrum later.

The game is about 6 hours long (if you are diligent in listening to the myths, cutscenes, and exploring the levels to find the secret orbs), and that’s about the right length.

You play as Raji, a circus performer, trying to find Gola, your little brother, who was kidnapped by demons. In the course of the game, you will have to jump and climb and kill a variety of demons.

While the game is very beautiful, and nicely large levels, it doesn’t offering anything really new as a game – nor anything very good. Fortunately, it isn’t a complete blunder, either, so you can certainly enjoy it for the tourism! 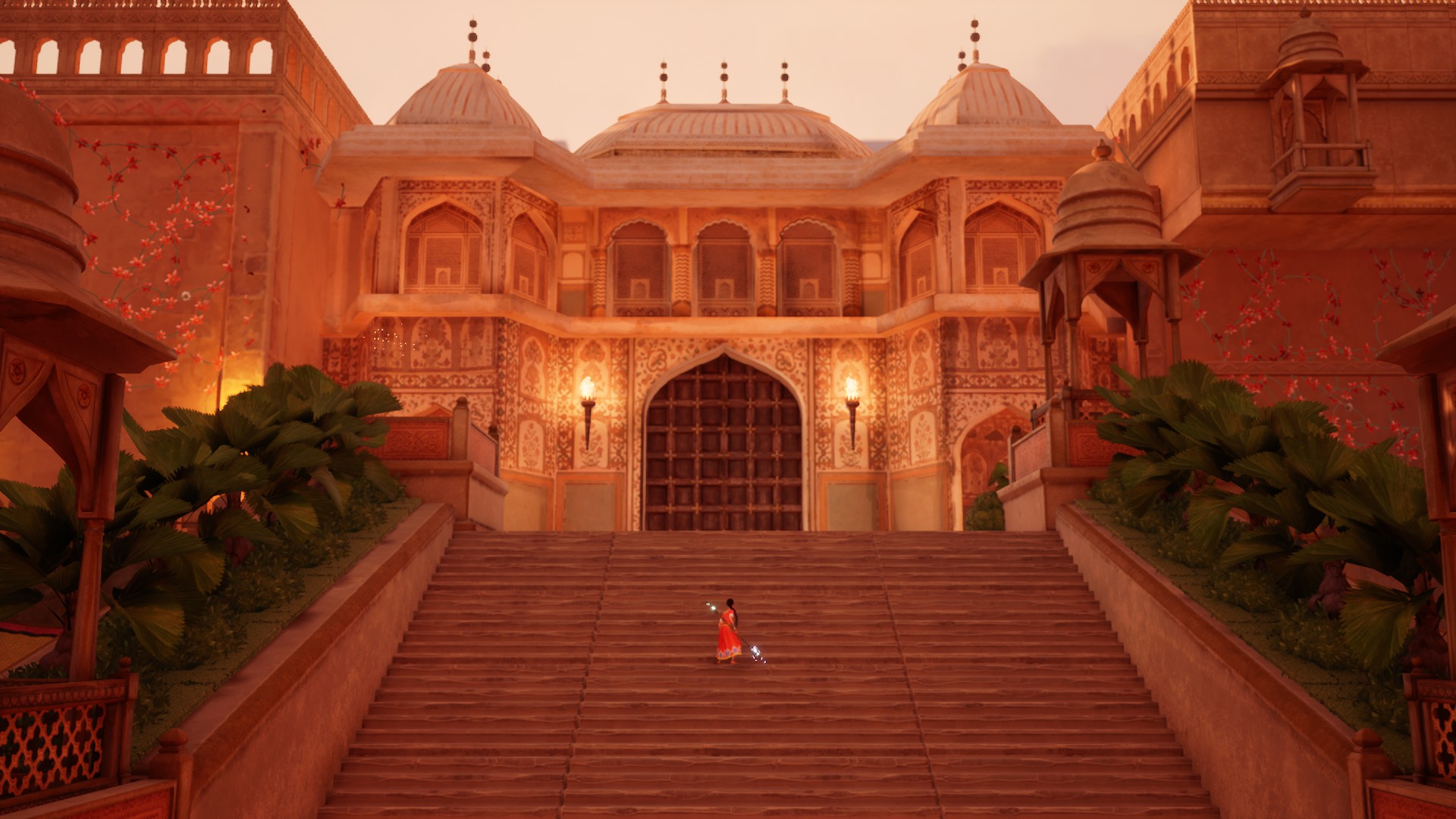 The visual style is, as I said, its most important element – and it’s really beautiful! It’s far from an amateur work, with great little effects spread throughout – like the glittering dunes that could come right out of Journey.

The levels are also well built, as you traverse a seemingly real and solid place – not merely a jumble of rooms.

The architecture is very beautiful, though at least one bit disappointing – clearly, the game was inspired by the Indo-islamic styles; this is fine (and still stunning, of course), but is less unique than the intricate Hindu architecture that routinely makes my jaw drop.
It’s also disappointing in the fact that Islamic architecture is used a lot more often in video games – Ubisoft in particular with Prince of Persia and Assassin’s Creed, but there are several other games that fit the bill. While Raji is not purely islamic, I feel like it was a lost opportunity not to go the full Indian route.
Still, I don’t want to sound too negative – the game IS beautiful and I had a wonderful time taking screenshots and drawing the bits and pieces I found the most interesting.

I really like how the story-telling, too, uses traditional Indian art to great effect – the cutscenes are in shadow play (puppets controlled with sticks whose black on white projection is seen by the audience) and the several myths from the Mahabharata and Ramayana are told with the aid of statues or huge wall frescoes.

There are 3.5 main levels to the game, and they’re very distinct, visually. If any of the above sounds interesting to you, go ahead and get the game. It’s certainly worth the time (and money) to spend a pleasant afternoon or two and just look around the world! 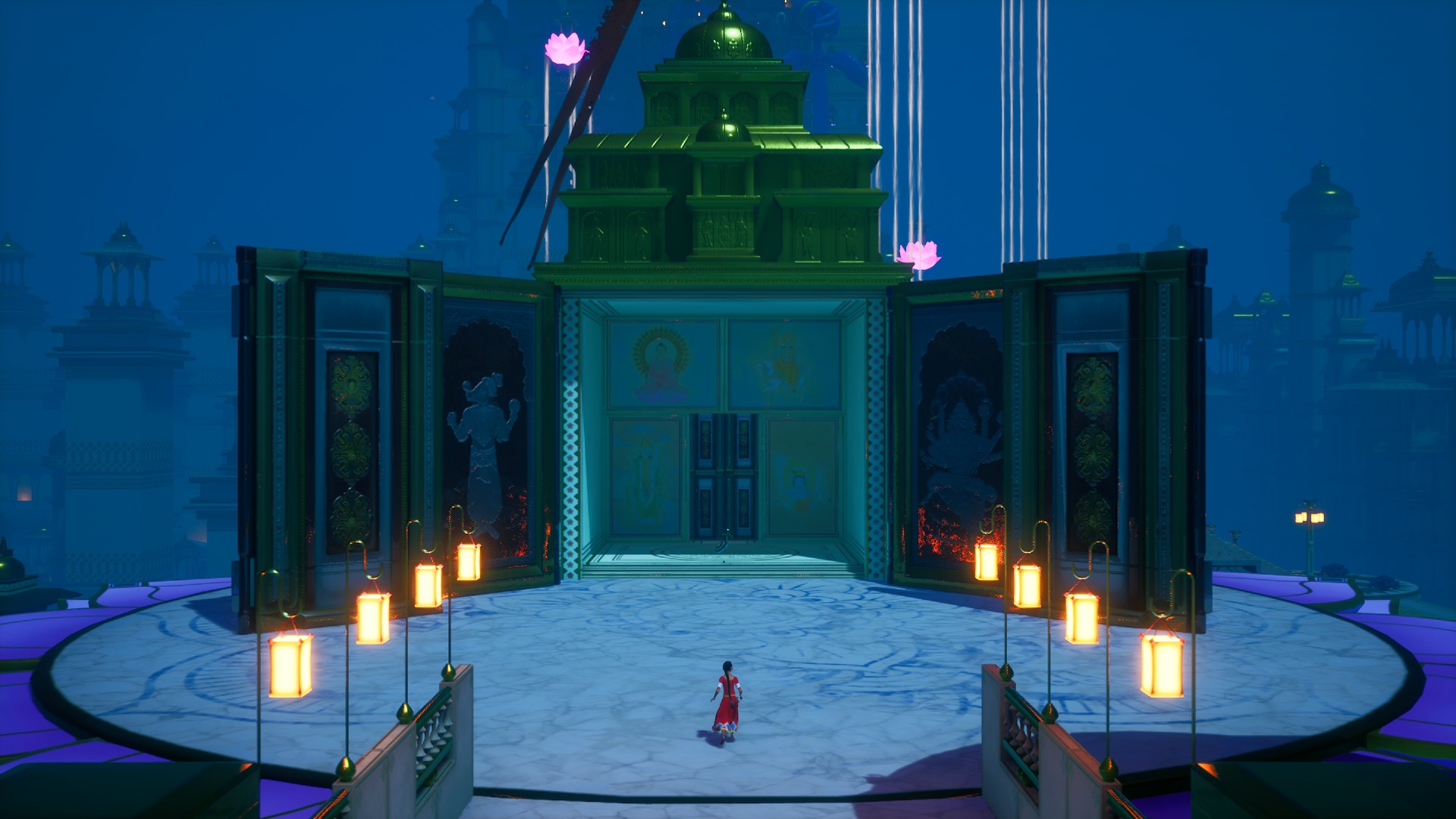 The music was a bit of a disappointing, to be honest – once again because it doesn’t quite hit the mark, culturally.

I love classical indian music (mostly Hindustani, but I’m also getting a bit into the Carnatic rhythms) and I was looking forward to how they would use it in the game – especially since the open form of the music is surprisingly fitting to video games! (The idea of the raga was used in Asheron’s Call 2 for its very open ended nature)
Unfortunately, while some Indian instruments are used, the music feels a bit to familiar – big, slow drumming, clean guitars, orchestral strings and so on. It also seems to draw from arabic sounds and themes, at times – perhaps because it feels more familiar to westerners at large, and evokes an oriental atmosphere?
Overall, stylistically, it ends up feeling fairly generic “film” music and not quite as Indian as I would like.

The music isn’t bad, but ends up being not particularly noteworthy. Its use is also fairly conventional – a fairly ambient song plays throughout the levels, fading out while a more intense “combat track” fades in when you enter combat. 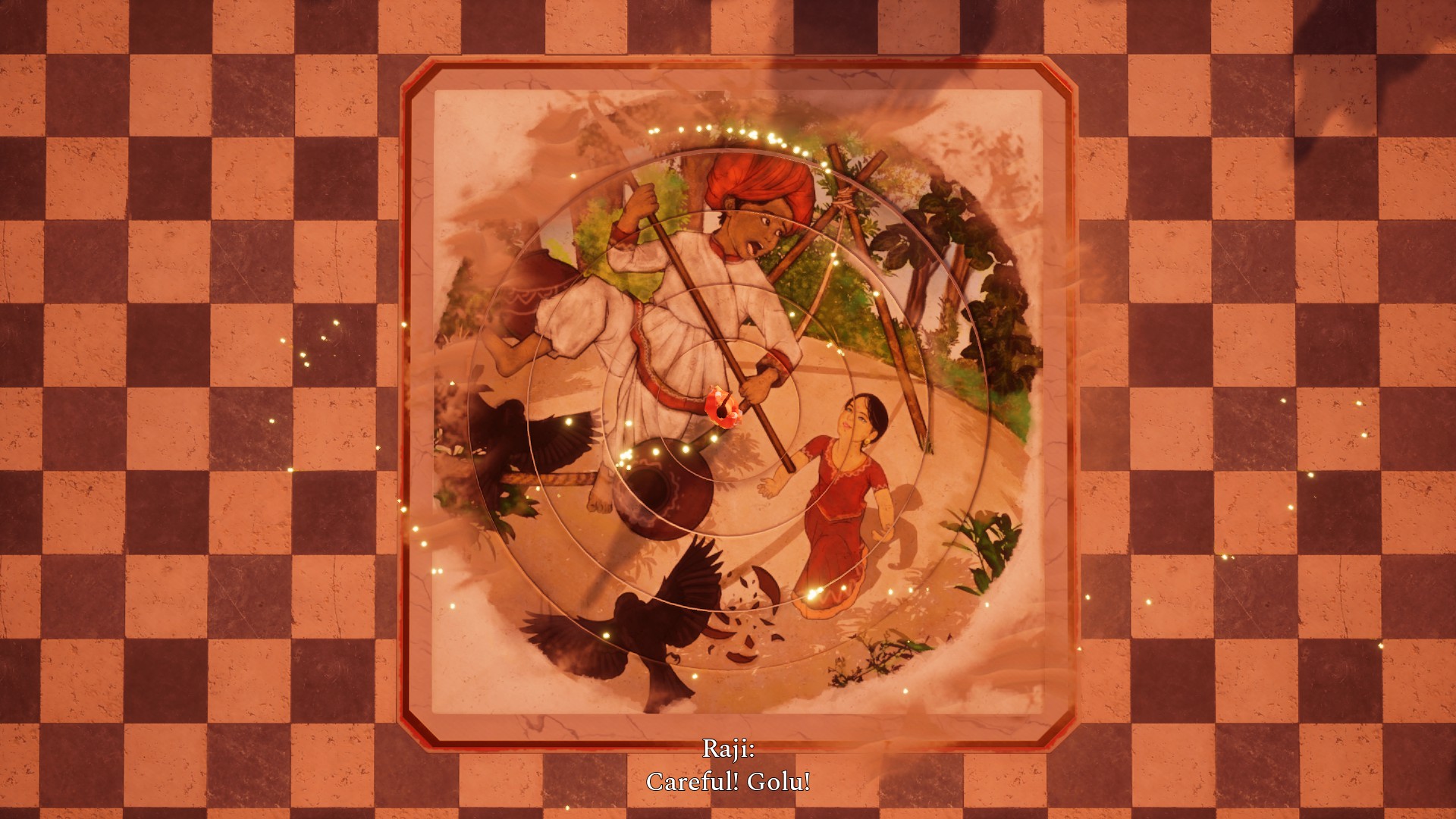 I don’t have much to say, here.

The plot itself is … there. It’s okay, but didn’t do much, for me. It’s very typical, straightforward; and that would be fine if the remaining pieces somehow brought it to a new light (like Brothers does), but I didn’t notice anything in Raji.

The more interesting (and ambivalent) topic is the mythology. The Mahabharata and Ramayana are two Indian epics, “written” ( between 300BCE and 300CE, likely after a long oral tradition) in Sanskrit, and they’re huge. The Mahabharata is 10 times longer than the Odyssey and Iliad combined (the Ramayana is shorter, but still 4 times their length). As you can imagine, this is a major source of Indian mythology!
The plot of the game seems largely unrelated to those epics, except in shaping the world, the places you visit. You will find some statues, shrines, or wall paintings depicting some stories from these epics. I think this is really cool, but isn’t entirely satisfactory to me.
I think this is due to 2 reasons: (1) the game isn’t long enough to drive the various characters and myths home – it’s difficult enough keeping track of the names; like the myths in the Iliad, they seem to assume familiarity with the general plots and characters of the epic to make an artistic statement of any depth.

As it stands, the little pieces of mythology are cool, but difficult to fit into the overall pattern of the game, and not exhaustive in any degree. It’s a nice addition of local character, but, to my discernment, not more than that. 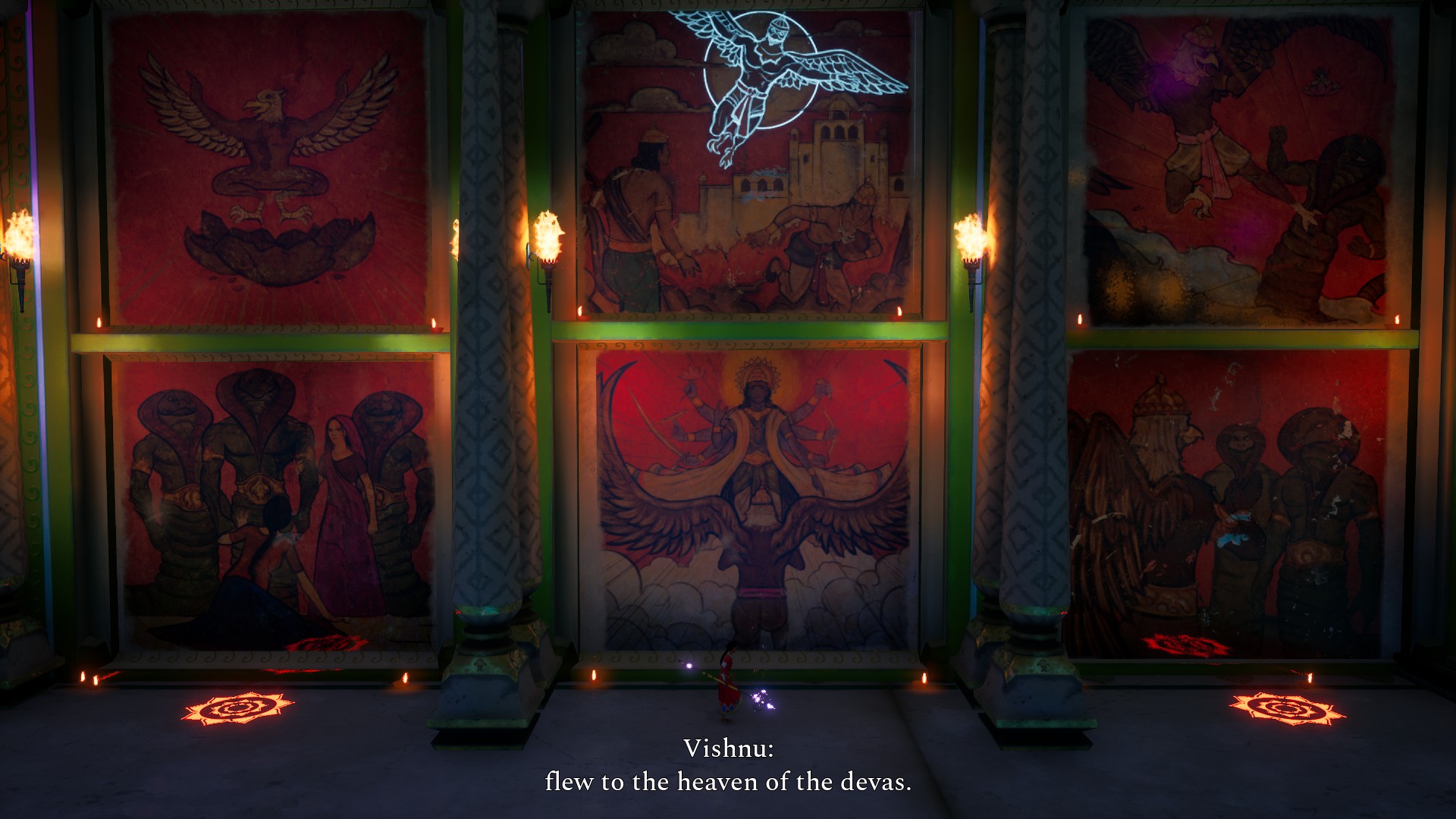 As I said, the gameplay isn’t particularly noteworthy. Not good, not terrible. It’s very simple, mostly platforming with small arenas of combat (where you’re locked in a small area and 3-4 enemies of enemies spawn), and occasional puzzles.

The platforming is fine, for the most part. You can jump, wall jump (though not very used), climb poles, and wall run. It’s a LOT like Prince of Persia, only isometric. Unfortunately, the perspective can trick you, at times, making directions and distance hard to judge – and making you jump to your death. Fortunately, the game has checkpoints before every jump, more or less.

The combat is okay, but less satisfying. There are 3 different weapons, but they all feel mostly the same; the game also has a light RPG element where you can assign elemental attacks to weapons and add points to certain triggers, but this is never relevant. There are some cool moves where you jump onto a wall to trigger a different kind of attack, and there’s some health management with executions but, overall, the combat is straightforward, if a bit awkward, and won’t really make you want more of it. It’s okay for what it is, but don’t expect Dark Souls level of refinement and challenge.

Finally, the puzzles are the worst part of the game. The majority of them would hardly be called “puzzles” – they involve rotating several layers into the correct position; all pieces are independent, though, so it’s just turning pictures until they face the right direction.
There were two different wheel puzzles in one level, but one of them was just as dumb as the rotating piece puzzles; the second was a bit better (requiring you to actually use your brain), but hardly enough to justify its existence.

I almost forgot one bit – exploration. This is, again, just a sprinkle of exploration to say it is there. The RPG element relies on finding “orbs” for your to assign to trigger skills; but most of these are just a fork in the path – if you choose one path, you’ll find the orb; the other continues the story.

The second level was particularly infuriating in this respect, since choosing the “wrong” path almost locked you out of the orb immediately; this water level had a few instances of terrible design, but I don’t think I need to get into details – it’s not the point of the game.

Overall, the game is very bland, gameplay wise. It’s not terrible, for the most part, but almost all of it is just there to provide “variety”. There is no build-up in complexity, no demand of you to learn a mechanic to any depth. 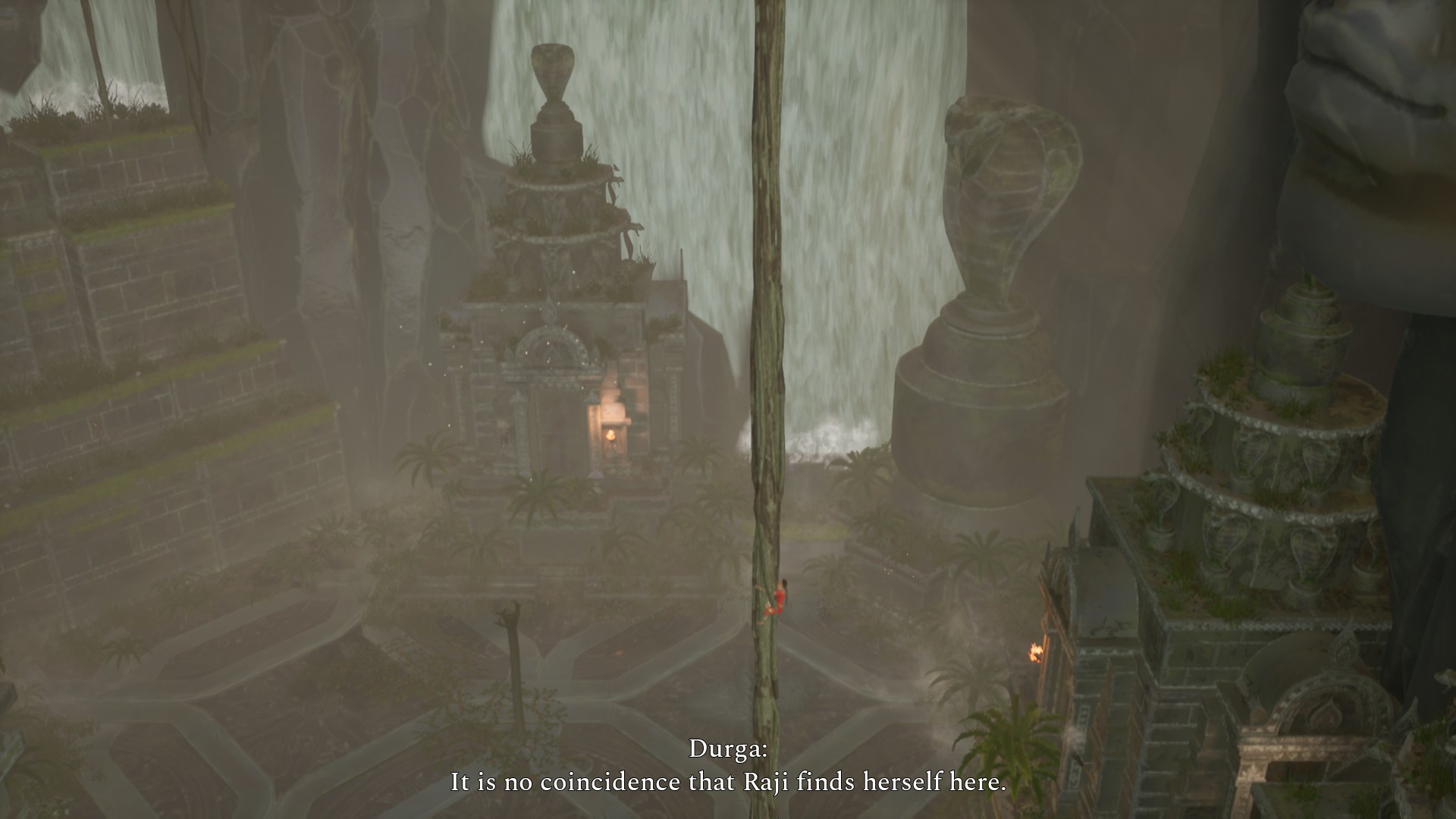 This last section is just a short elaboration on my comparison with Brothers: A Tale of Two Sons and Hob.

I found Hob an almost tragic game – it showed a lot of talent, but mostly lacked a purpose and felt very meandering. Raji is very similar, in terms of gameplay.
Where I think Raji has the upper hand, beyond the theme, is that it is shorter, and there is more to look at.

That said, it doesn’t exist solely for the exposition like Brothers: A Tale of Two Sons. In particular, it doesn’t live up to Brothers’ careful setup of scenes, musical themes and controls to transcend a fairly typical story. Raji is much more straightforward, in this regard. 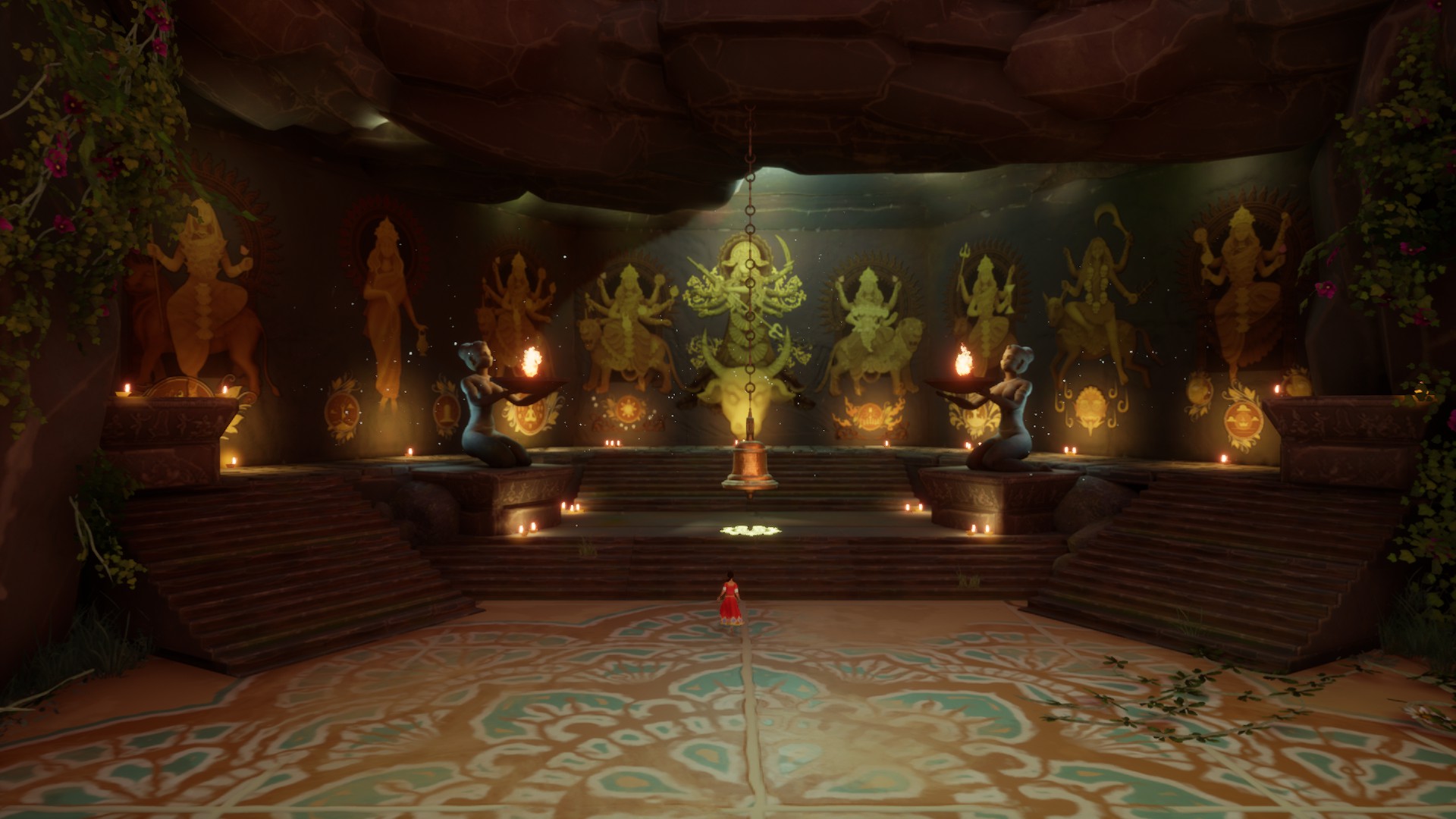 I’ll just reiterate the point – Raji is a beautiful game in an underexplored setting, so it is definitely worth the time and money if you simply want to look at it.

If you’re actually looking for good gameplay (I mean GOOD) or a masterful narrative experience, this is unfortunately not it. I could rate the game as “Save” for the visuals alone, but I don’t think I can justify it for the whole package.