The Red Lantern puts you in the shoes of an aspiring musher who dreamed of dog sledding across the Alaskan wilderness and bond with her dog team. Well, today is the day the dream will become reality. She does have some worries about whether or not she’s actually up for it as she’ll have to get the hang of dog sledding on her first leg of her journey and since she doesn’t necessarily have a backup plan if she fails. Nonetheless, you need to build up your dog team before you officially head out. You already have your first member, Chomper, who is our musher’s childhood dog which she suspects shares her dream as well.

Before you head out, you’ll be choosing four dogs to be a part of your team out of the possible eight that’s available. Each dog does have their own personality and will affect your runs slightly. Each does also have their own short story that goes along with them that will have a chance to play out. One of my favorites, for example, is Barkly who is a super protective dog where you’ll encourage him to bark more. You’ll also have some dogs that will point you towards somewhere or even force you to encounter something. You’re given a short description of the dog before you’ll be given the choice to adopt or not, so you won’t be choosing blindly. You’ll be stuck with your team forever so choose wisely. You can’t reverse your adoption even if the next dog catches your heart after you fill up your team. Don’t worry, as you can have up to thee different saves so you can have multiple teams in progress. 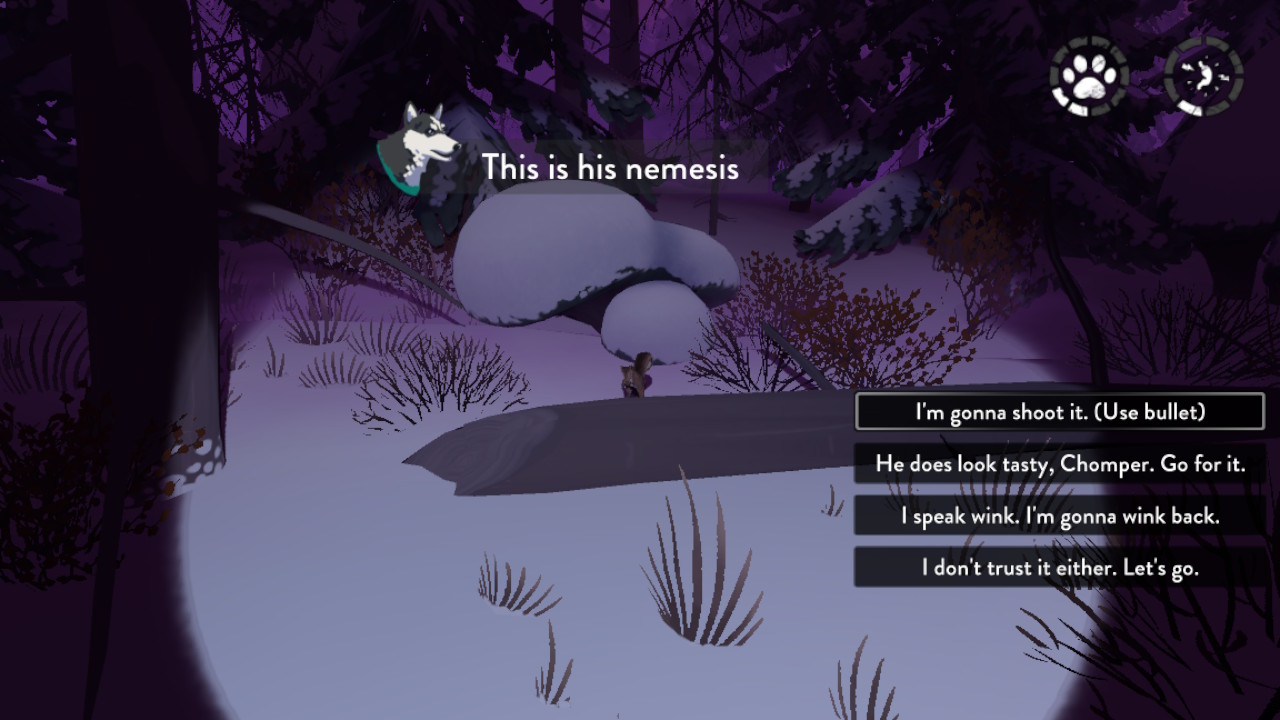 Once your team is picked, you’ll be ready to go on your first dog sledding adventure. Your goal? To get to a cabin you’ll be staying at that is marked by a red lantern hanging by the door. It’s going to be a hard journey there, and our musher isn’t really prepared that well. Actually you’ll fail pretty quickly and if anything there’s a low chance of making it on your first run. Anyway, from here it’s pretty straightforward. You’re basically on rails as you’ll pass trail markers, choose between going left (haw) or right (gee) after checking your rough map, and encountering a random encounter. Encounters can vary between giving you an option to hunt, get resources like bark, get a tool like a fishing pole, or be a story event (which can either be the musher’s or the dog’s). 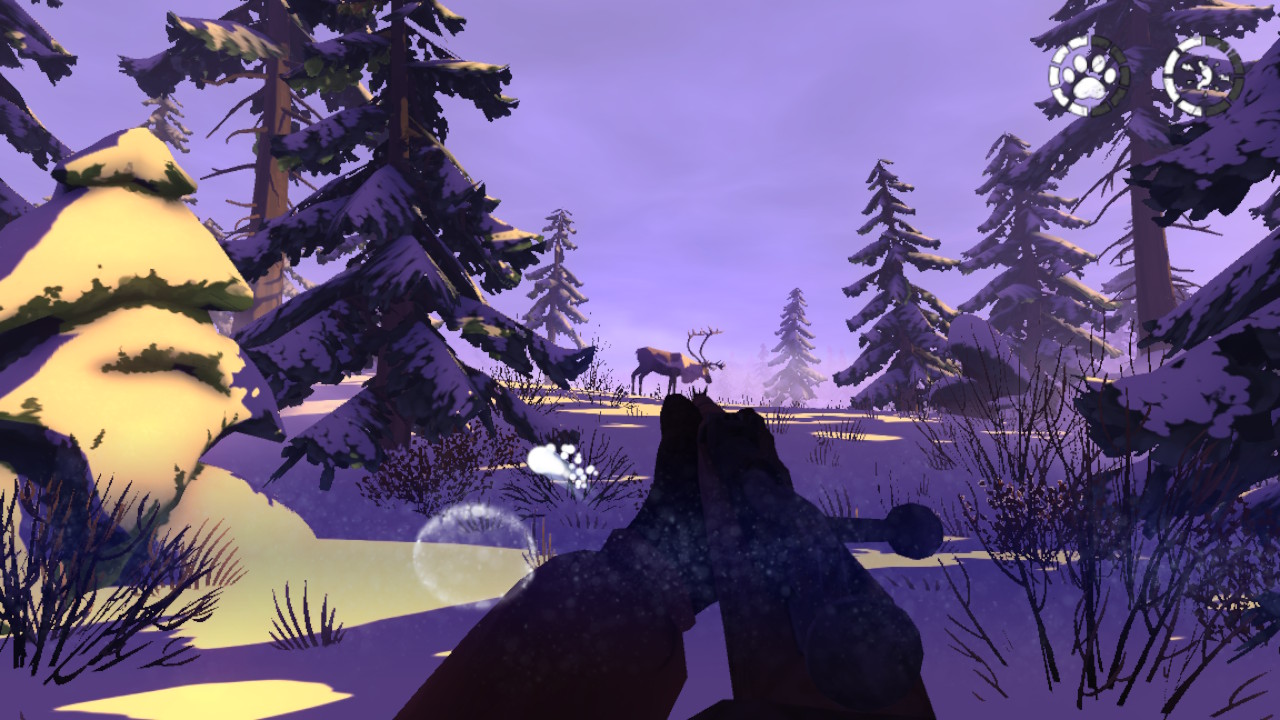 In terms of hunting scenarios, it’s well, there’s an aspect that’s not that good. I appreciate that the developers wanted to do something unique, but I don’t know if it really worked in the game’s favor. Shooting is treated like a minigame where your reticle is swinging up and down with a circle you need to press the shoot button on stays moving from side to side. You can slow down your reticle, but it’s not forever as it has an invisible meter. This is somewhat annoying as they will both often miss each other and even when you get inside the circle, it has a high chance of failing if it was more towards the border rather than the middle. Whether it’s because the game registered it as a fail or if the scenario can’t be won isn’t exactly obvious though. At least you have seemingly unlimited time to take your shot or else it would be horrible. 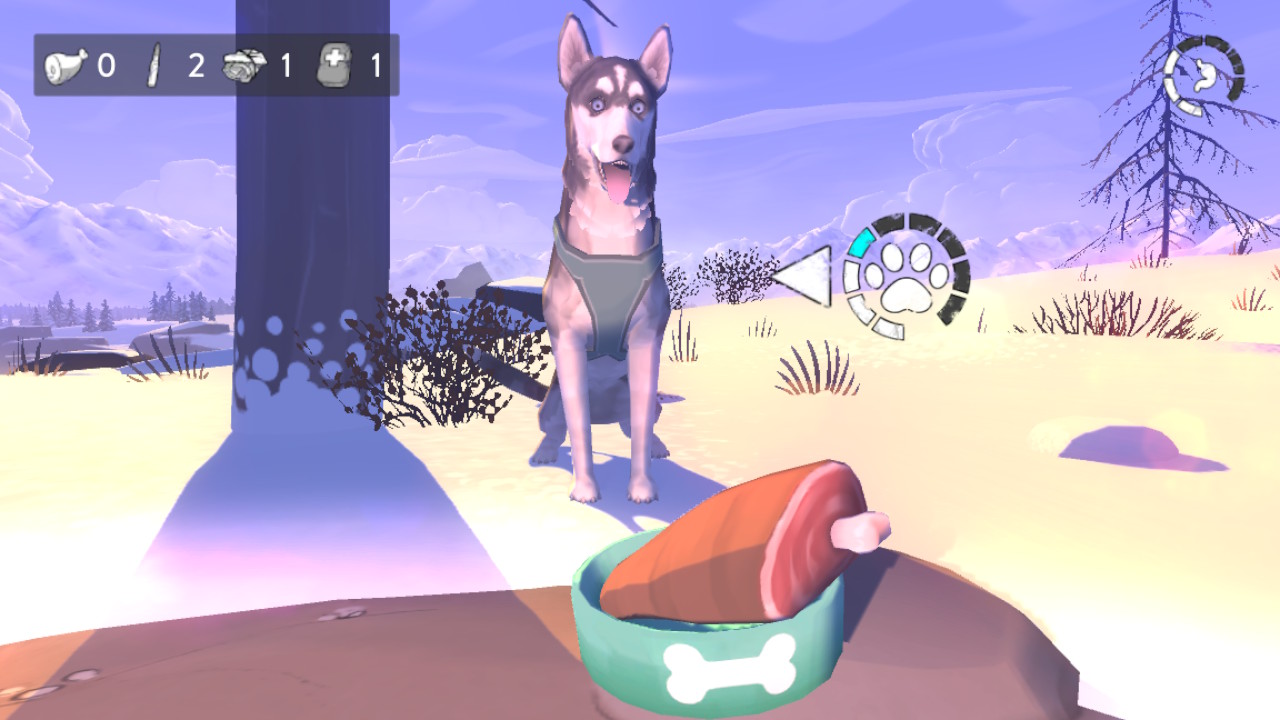 Though, of course you do have to manage your resources. You have to keep an eye on your hunger, which lowers with each encounter, and your dogs’ energy that lowers after each trail marker you pass. These are important to keep an eye on as your run will end if either of these are empty. With this, you also have to keep an eye on the amount of food you have to decide if you need to hunt (or if you can let your dogs eat a quick meal), bullets, and how much bark you have so you can cook the meat. There are also some conditions that you can be affected by like not resting can cause tiredness and takes away meter capacity, eating raw meat weirdly makes you cold and will cause you to lose an additional hunger bar, and injured which flags you to use a medkit before the next blow comes. This game admittedly doesn’t really dive much into the survival aspect, which will be good for people that are looking for a “diet survival”, but not for those that are likely coming off from other survival games like The Long Dark.

If you fail a run, you’re just brought back to when the musher is still driving after the team is picked and it’s treated as a nightmare (dozing at the wheel though?!?). Each run will then make the musher pack more supplies, including any tools you found in your previous runs, to make the run easier. After all, you won’t come across a tool every run and you won’t have it for long depending on when you get it. Depending on your luck, which can be terrible at times, it may take you at least 2 hours (or at least seven runs).

There were also some glitches that I ran into. On each restart, the sound resets to 0, which isn’t a big deal, but is annoying; the animations have a chance of being skipped; you can break the game to where encounters and trail markers won’t register correctly (but you can hear the game trying to ping the system; you can trick the game to let you hunt with no bullets (though it’ll give you -1 bullets); and there’s a chance for the “Santa glitch” to happen which is when the game glitches at the ending and will have you running in air for a bit then teleport to run in place instead of having the ending play out. I do wonder if this is due to the player not being directly in front of the cabin on the map or not. This last one gets your save stuck. There is actually a patch that went into review for the Switch version while I was writing this, so it’s very likely that most of these glitches are fixed (looks at EGS not having forums).

Here comes the hard part. I really don’t think the roguelike genre fitted the kind of game the developers were setting out to make. It’s very obvious the team wanted to make a story that was very emotional. Give players heartwarming moments as you get to know your dogs more or have you panicking as you’re suddenly attacked. Have the players get in the mind of the musher and get to know her backstory as we hear her talk to herself. However, having it being a roguelike worked against this. There may be 100 different scenarios like the developers said, but the game is so repetitive that you see the same scenarios over and over again. These moments you have work great the first, maybe second, time. It loses it’s luster after the third, fourth, tenth time. In my first save, I got the same scenarios like clockwork with a few sprinkled in to give me a new tool or when it detected that I was over a frozen lake (which still had the same couple scenarios play out). The musher quickly gets annoying, or more annoying in my case (no offense to Ashley Burch as I loved the other characters she portrays, but just not this one), as you hear the same lines, you get attacked at the same milestone, and you only get to see one or two dog stories play out repeatedly unless you’re lucky enough for another dog’s story to finally come along. And even then, it’s only a few encounters that it plays out and you may not be able to complete it. There is also not a change whether or not you go left or right other than if you’ll be able to get a scenario that will let you fish or get a fishing pole. I also instinctively expected the relationship you built up to carry over and not reset. To put it in fewer words, half of the game fights with the other. 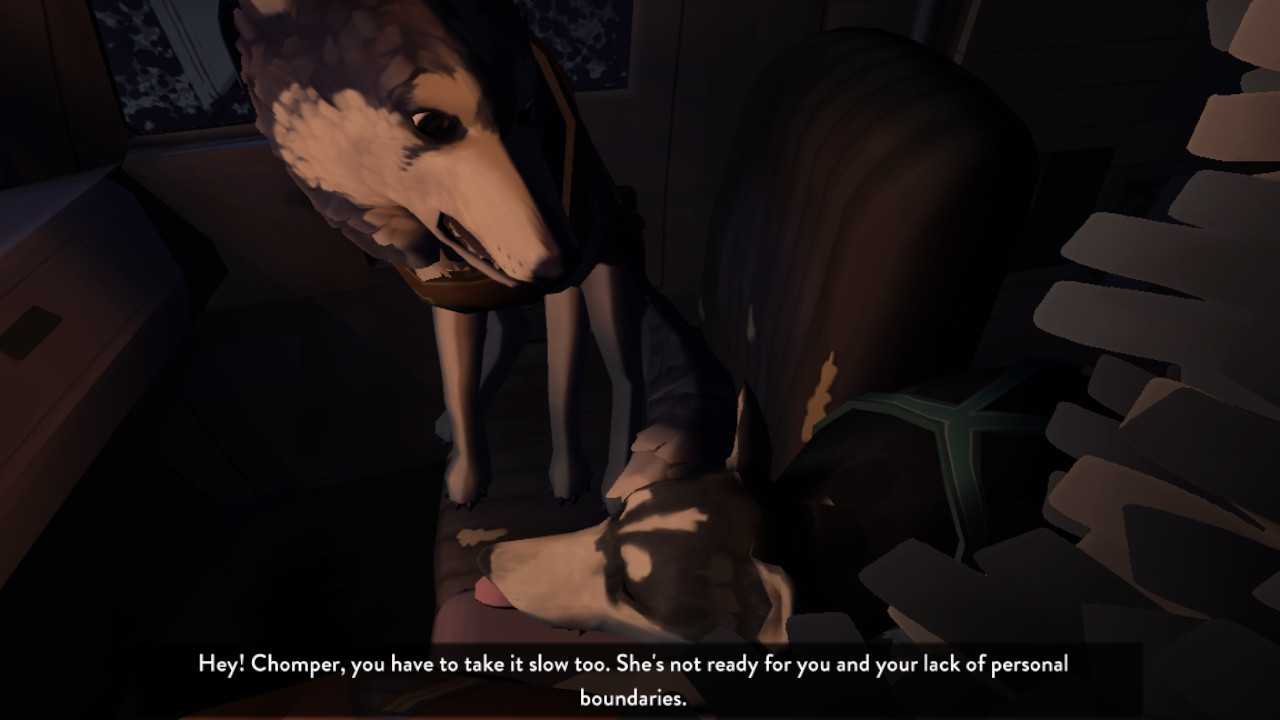 I feel this would have been better and worked well if it wasn’t a roguelike and truly put focus on the story. Have more room to explore the musher, get to know all of your dogs over the course of your journey, see the dynamic the dogs have, have the moments hit rather than trying to have it hit over and over again not too long from the last time it came up. Maybe bring in more survival as the Alaskan wilderness puts a strain on the musher and her dogs that may cause her to rethink her decision on whether or not it’s worth it. See the musher get more comfortable as she goes from someone that is kind of a mess to being somewhat experienced before a race. Maybe have the race be the second half of the game. If there were concerns for replayability, there is already some built in as you can do runs with other dogs to see their story and the dynamic between this new team and even have you choose how prepared the musher is (or have this be a difficulty setting?), rather than having her being under-prepared (which doesn’t make sense why she isn’t in the first place).

I understand if the developers couldn’t figure out a good way to incorporate it to make it engaging other than going for an easy roguelike route, as I’m having some difficulty trying to figure it out, but it would have made the game better if a way was found.

If you’re wondering how this performs on the Switch, it runs well for the most part. Loading doesn’t take long at all, everything looks all nice, and there were no noticeable drops or stutters. There was some flickering happening when I was a few runs into my second save file, but I’m not sure how much is due to the game’s performance (as it wasn’t a problem in all of my other runs) or if it was just a small glitch that happened. 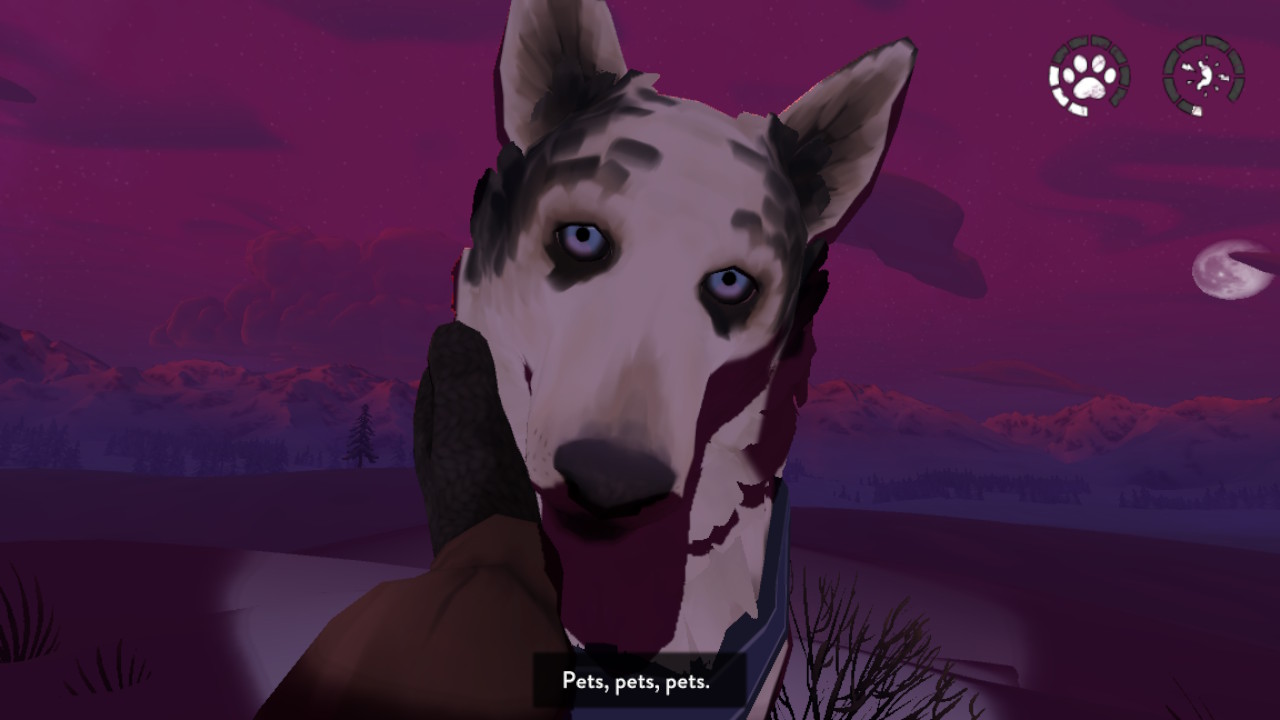 I guess if you’re someone that loves Ashley Burch and want more games with her in them, along with not minding the downsides The Red Lantern brings with it, I’m sure this will be worth it. However, to me, there is way too much going against it than going for it that I wouldn’t recommend picking this up without a discount. The premise is great (as it was the reason it caught my eye last year), you can pet the dogs, and the art style is great (which certainly reminds me of The Long Dark), but it got repetitive surprisingly fast, it doesn’t really go into the survival aspect as much as I would have liked, the glitches did make it annoying (though again, they should be fixed once the patch gets approved), and being a roguelike ultimately worked against the type of game the developers were going for. I suppose it also didn’t help that my impressions from the trailer was that it was going to be a game where had control of everything, rather than it being on rails, didn’t help much either. Either way, it’ll give you a couple hours of fun… if you don’t get tired in an hour.