Drake Hollow had everything when I saw it: a really solid and consistent art style, an interesting concept and it just looked like a really fun survival game to play, skipping the realism of other games of the genre and focusing on a more relaxed environment thanks to a robust building system, cute NPC’s and much simpler combat and survival mechanics.

While keeping it simple is rarely a bad thing, it also needs to be well done and kept interesting throughout the game’s length and Drake Hollow succeeds for the most part in the former and miserably fails in the latter to the point I couldn’t push myself past the second world due to the repetitive nature of the game. 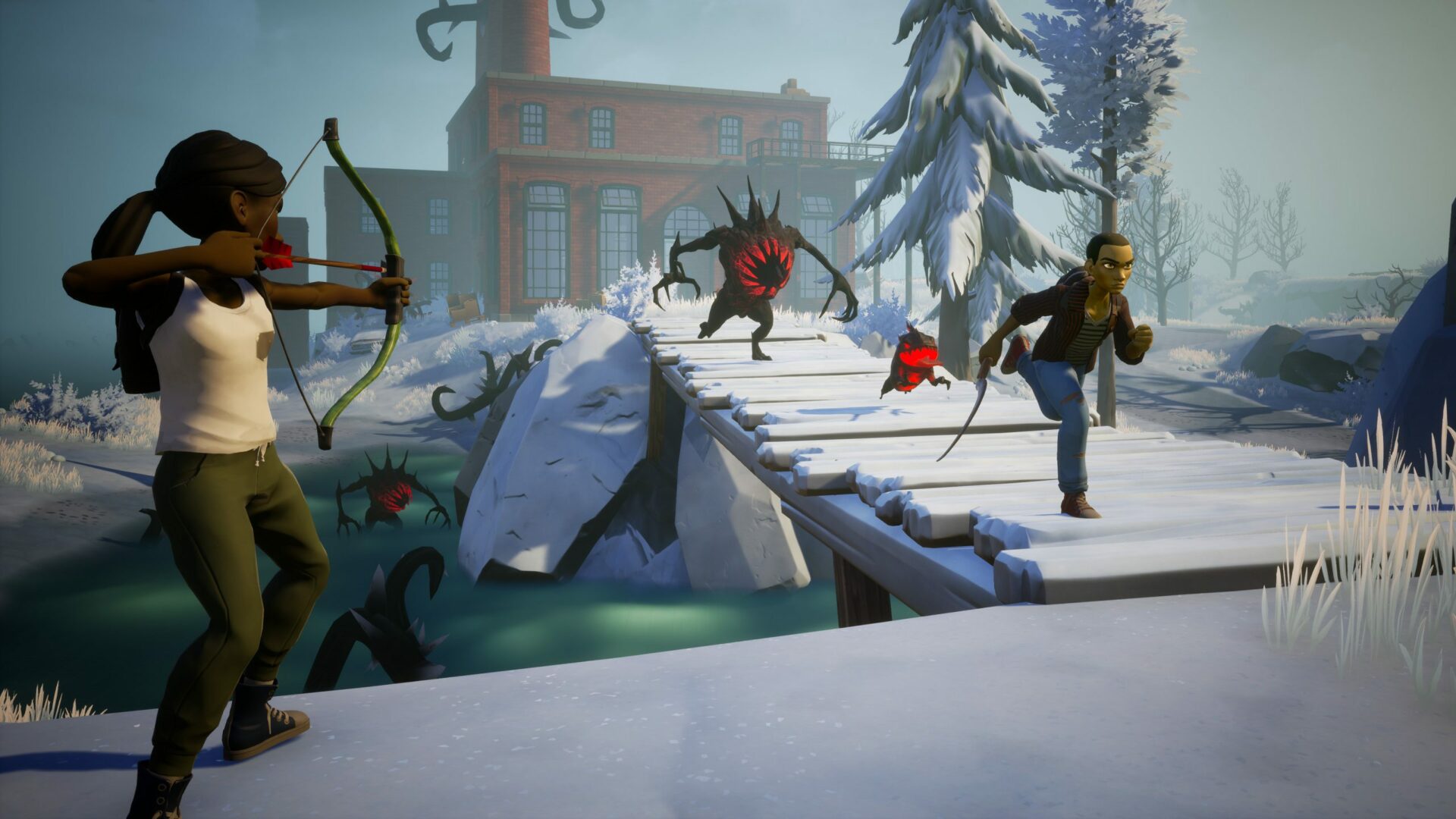 A simple but quite pleasant character customization screen will allow you to change your character’s looks and starting clothes. From gender to face, hair and its color, you can spawn with a decent degree of customization for your kid.

To answer this section’s title, yes – you are a kid. You meet a raven that then takes you to a hidden portal to a realm that has been doomed by a dark entity that has stripped its cute Drake inhabitants of their magic. The raven believes you might be the one to save the Drakes and your quest starts!

After a painfully long tutorial that stretches the same mechanics over multiple sections, the game really shows what you’re fighting for – the Drakes. Cute as hell, they are best describes as walking onions with hands and big googly eyes you can’t stop but spout an “awwww” occasionally. They will give you gifts with loot and interact with the environments around them. You must protect them by killing all enemies going after them to ensure their safety and restore peace to their world.

But how do you do this? How does it play?

Drake Hollow for me can best be described as a game that took a lot of ideas out of Fortnite’s Save the World content and implemented a rather fun survival-crafting system around the drakes. You’ll smash anything you see in your path to gather resources – pick up berries, chop trees for wood or simply smash rusty cars for rarer materials you’ll then use in your crafting.

Crafting starts simple, a basic bed that wears off after a night sleep, a well and basic survival stuff but afterwards you’ll encounter far more complicated stuff to add to the Drake’s village you’re building, such as electronics and power grids. Resource grids are also present as you’ll find trucks on some islands that you can connect to pylons back to the village and allow resources to be shared.

Yes! The game is split in 4 worlds with their own seasons and biomes – each world is comprised of a few islands (very small – can be completely seen and cleared in under 5 minutes each) that you must clear to repel the enemy forces and also scavenge for materials for the Drakes as they must eat, drink, sleep and have fun (seriously). The trouble is that while worlds have their own biome and seasons and whatnot, the enemy variety is the same – there are about 4-5 enemy types in the game by the end of World 2 and you’ll meet them all within a couple hours of play. There is no variety from the get-go, you literally go to an island, break stuff for resources, kill the same enemies and clear it and go back to the drakes.

And ov… okay you get it.

Drake Hollow commits the cardinal sin of being painfully BORING after a couple hours to the point I couldn’t keep playing after halfway through the game as I had seen it all hours ago – no new enemies, no combat changes, no real progression. Just grind resources and build new stuff for the village which, while cool, isn’t enough to keep anyone interested throughout the painfully repetitive island system. 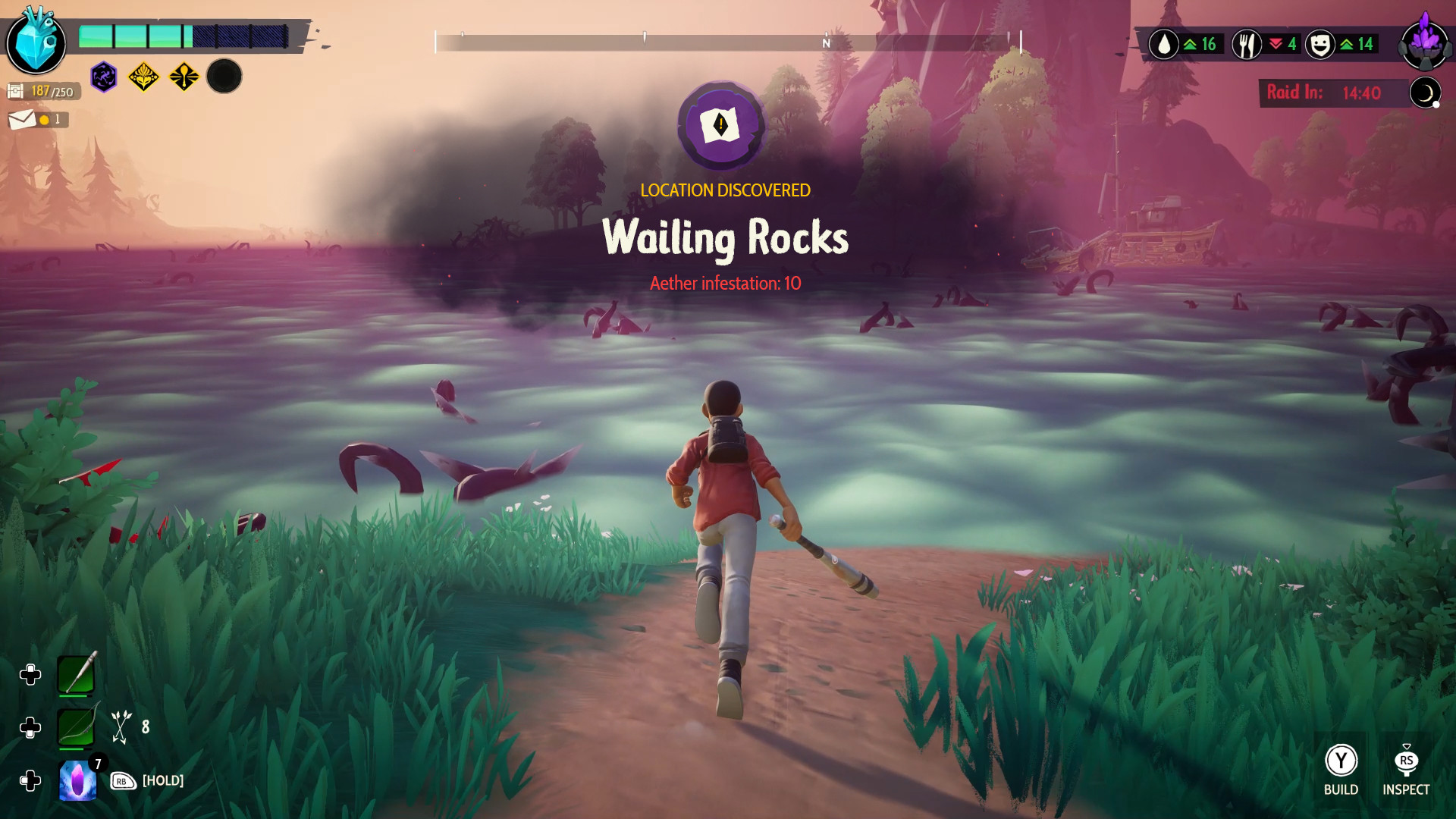 Scaling is another mess as you can go to any island of the world from the get-go and combat is a joke on 2 different aspects:

Touching on the second subject, the combat is done through 3 buttons – attacking, blocking or shooting. There is no dodge so you have to clunkily jump or move fast out of the way in order to dodge an attack which seem to be awfully telegraphed – while you get a dash after a while, the dash feels like the Outlander’s dash in Fortnite which is used for moving faster and adventuring rather than a valid combat strategy, the animation is too stiff to make it a worthwhile option during combat. Due to the lack of more standard mechanics and worse yet, proper animations, the game feels very clunky to play as you have to stand still for a second to do an attack while you’re being attacked from all sides. Melee could’ve been far better implemented and to approach the first subject of my criticism now, it’s also horribly unbalanced as you have to hit an enemy multiple times with a one-handed weapon to kill him and that requires standing still multiple times in order to do it – on top of this, you don’t telegraph attacks so you must be careful – the lack of a lock-on doesn’t help the game feel any less clunky due to it trying to feel like a character action hack n slash rather than a more realistic and traditional survival game – it’s a blend that doesn’t work.

One-handed weapons have a worse issue – the two-handed weapons: due to the high damage nature of these two-handed weapons, the faster attack speed of the one-handed weapons doesn’t matter when you can kill enemies with 1 or 2 hits with a two-handed are thus reduce your need to stand still and risk being hit as you melee enemies repeatedly. The pros and cons of each weapon type aren’t well balanced and this further translates into the ranged combat – as I repeatedly found bow arrows and blunderbuss shells which are super-high damage weapons with little risk for my character since I can shoot them from afar, why use melee? Ammo is plentiful everywhere – I barely ran out of either ammo type as I mercilessly one-shot pretty much everything in front of me so what’s the point of melee or using other ranged weapons more complex than the standard powerful ones?

Now imagine having to stand this mediocre combat for hours and hours and you kill the same enemies over and over on these really small islands that offer no secrets or any cool rewarding content if you explore them or go off the beaten path. It’s the same gameplay loop since the TUTORIAL. It’s painfully repetitive and after a while I couldn’t have any fun at all. 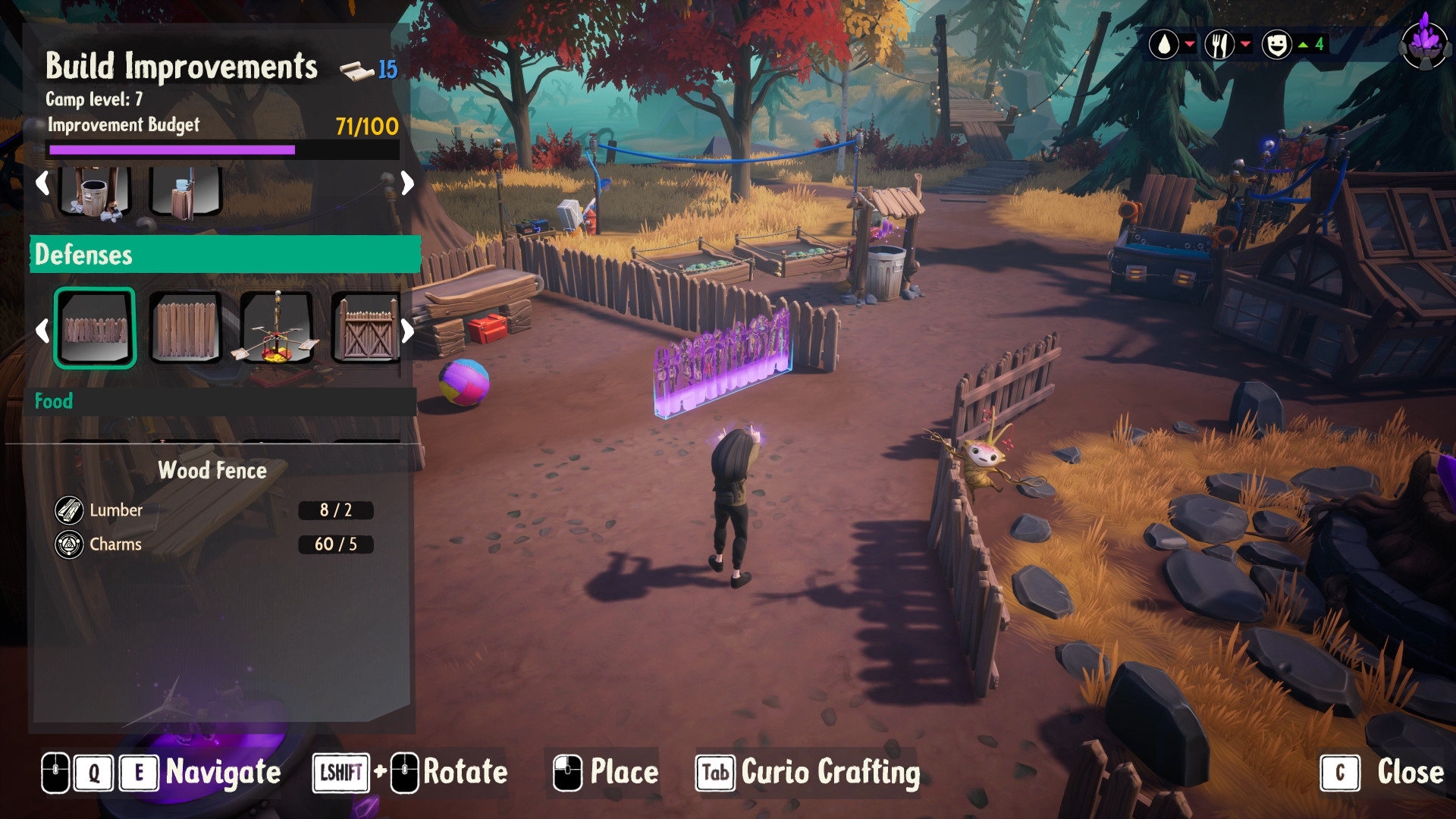 I love the building system, the UI isn’t fantastic but the possibilities are great and you can’t help but feel invested in helping the little Drakes but everything around this robust system just diminishes it – defending the Drakes involves the boring repetitive combat and gathering resources to keep them fed, happy and rested involves exploring the same small, boring and soulless islands that just have more boring combat to add insult to injury.

It’s a simple take on survival (you don’t actually have to eat, drink or sleep while the cute little Drakes do) but the focus is on a grind that becomes too boring too fast and the magic of the game is gone – the unique setting is great, the art style is fantastic and the ideas are there but I can’t enjoy Drake Hollow, it has to be more than a good game to look at and sadly, it’s not a good game to play.

The art style and overall visual quality is really great, with a really charming cartoony style (especially the beautifully designed Drakes) that reminds me of, again, Fortnite which is a great looking game as well, in my opinion. The UI isn’t fantastic but gets the job done – obviously done for consoles first, it’s a bit clunky at first to build anything but it’s not hard to get acquainted with – it’s not as intuitive as it should, though (still not as bad as Fallout 4, for instance). 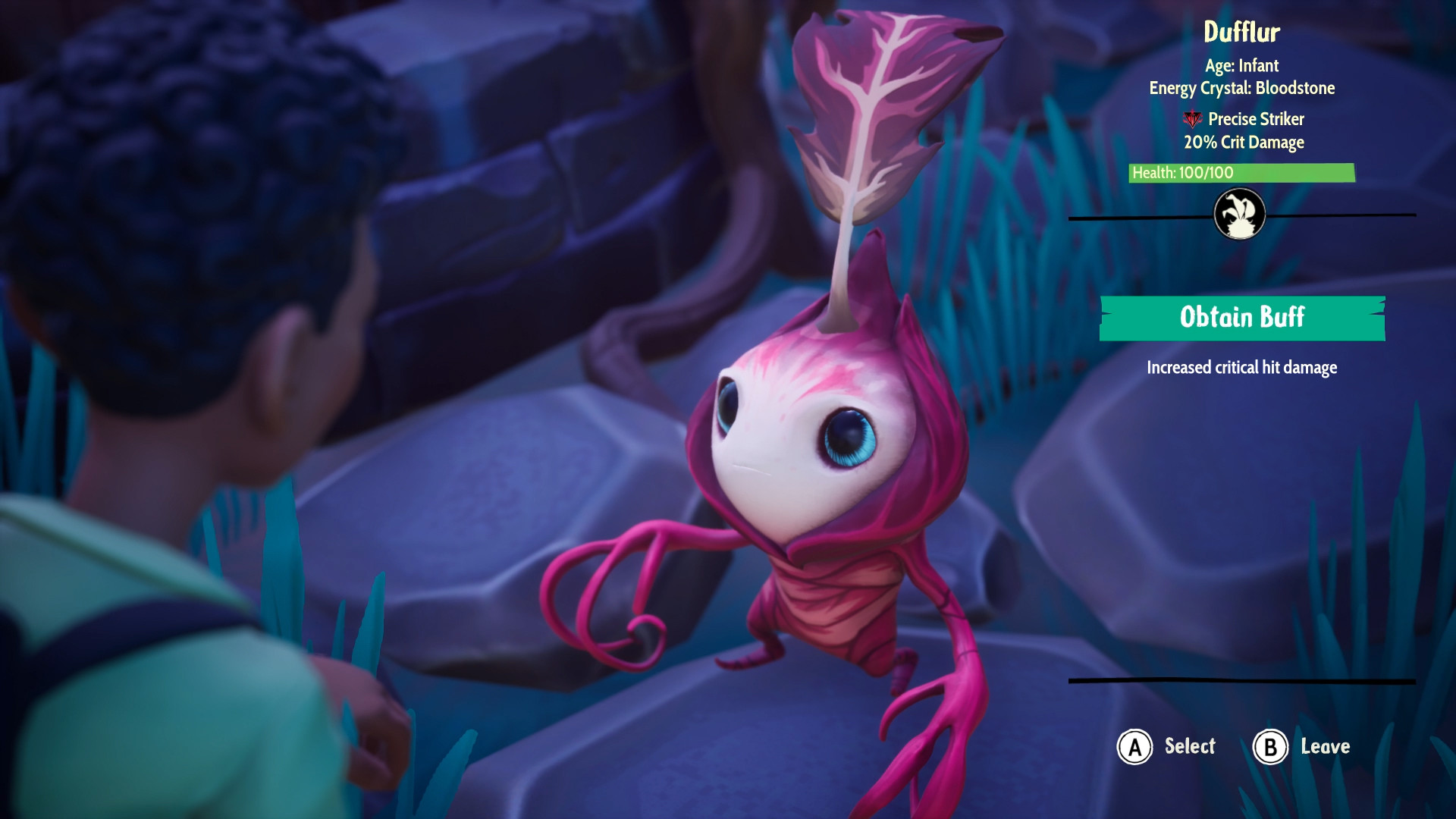 The graphical options aren’t plentiful and the game seems to run worse than it should in comparison with more demanding games that still don’t push my PC as hard as Drake Hollow does – it still runs at the steady 60FPS I need but I don’t think my fans should be going as haywire as they do when more demanding games run just as well if not better and without a hurricane inside my computer.

The music of Drake Hollow is mostly ambient music that fits the setting and the bleak environments of a lost Drake world – while nothing to write home about, it’s serviceable. Combat and enemy encounters in general are quite quiet as well in comparison as most of the stuff happens visually with little to no sound changes – enemies barely make noise despite looking well designed and quite creepy so there’s no audio escalation of combat, no audible stakes for your life as you smash them to pieces with your melee weapon or your ranged weapons which also have really poor sound effects. The game is just empty and repetitive and it sounds empty and repetitive even when it’s at its busiest phase.

Drake Hollow impressed me in the first hour. I genuinely thought I’d have a gem, a diamond in the rough in my hands. And the more I played and the more I saw everything was the same as what I saw in that very first impressively crafted hour, I couldn’t stomach much more after a few hours. Despite having good visual evolutions thanks to seasons and biomes, Drake Hollow sounds and plays the same from the tutorial to the end credits and the gameplay it has is split into mediocre exploration plus mediocre combat and a robust building and management system that doesn’t carry the game at all, especially when facing a 24,99€ price tag. Definitely grab it on a massive sale – I can see it being more fun with friends in co-op but the game itself is a repetitive, boring experience that should be skipped in single-player.