The two legendary chicken detectives are back together after their glory days are long gone, and they have a case to solve!

A noir visual novel set in a crime-ridden city with anthropomorphic animals instead of people. The legendary Chicken Police get back together for a new case that will see chaos being left wherever they go. This is assisted with a unique visual style and some casual gameplay mechanics such as dialogue interrogations and various mini-games. 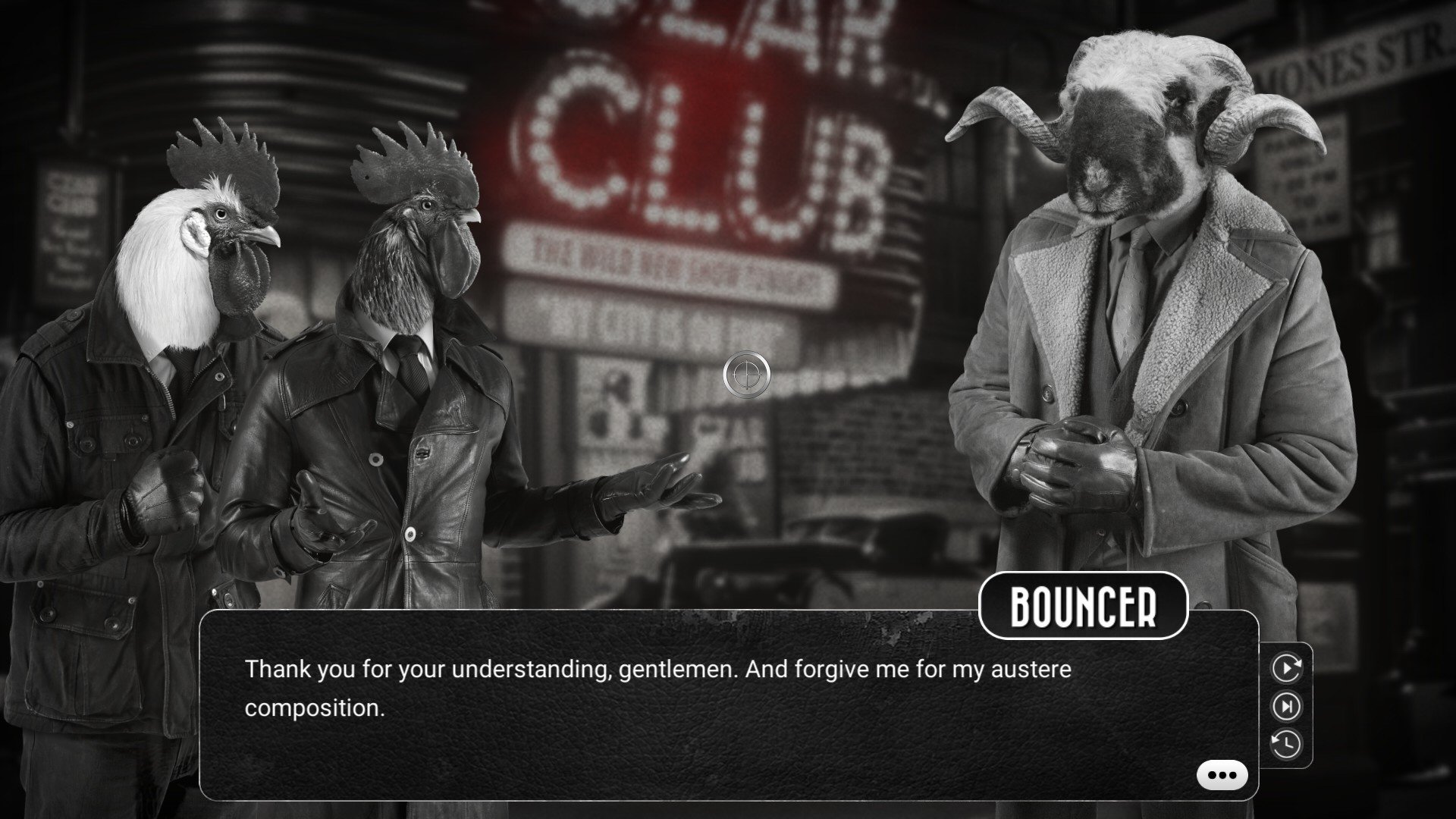 The two main characters that our story follows are Sonny Featherland and Marty MacChicken, also known around the city as Chicken Police. Despite their reputation, their glory days are over and the last time they saw each other ended badly. However, now they need to get back together to solve a new case. The case is given by a cat woman named Natasha, who is well-known in the city for her singing and dancing performances as well as being romantically involved with a mob boss. 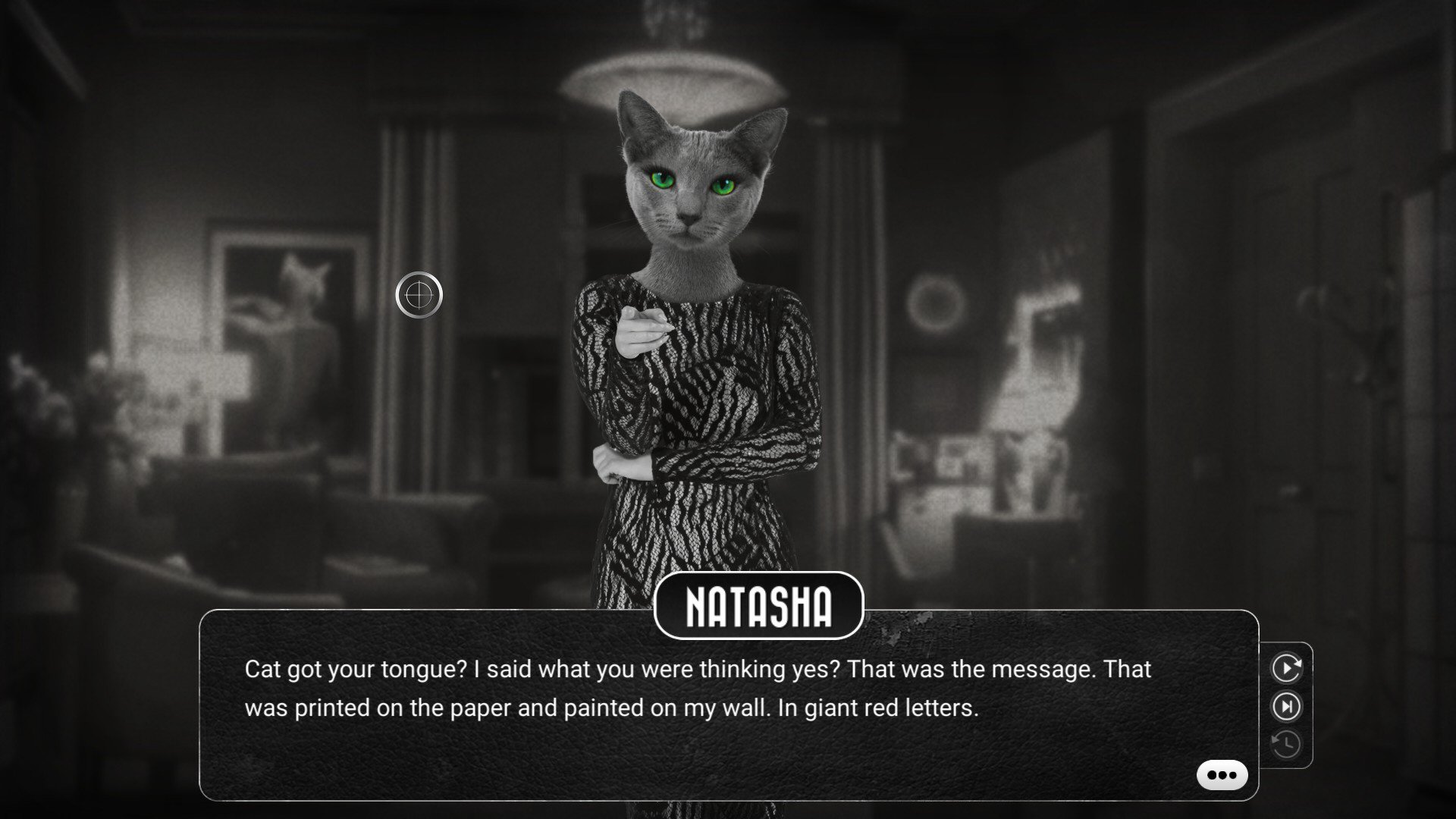 The case takes our chicken duo to various locations around the City of Clawville, and bit by bit we get to learn a lot about this place and its backstory. The game gives us a lot of interesting info about the city and makes this place feel alive, like it has a whole history of its own of various events that many characters often talk about.

The whole world in the game is filled with anthropomorphic animals of different species, all managing to co-exist but still being fully aware of their differences. The game often explores these differences and has characters remark on that. 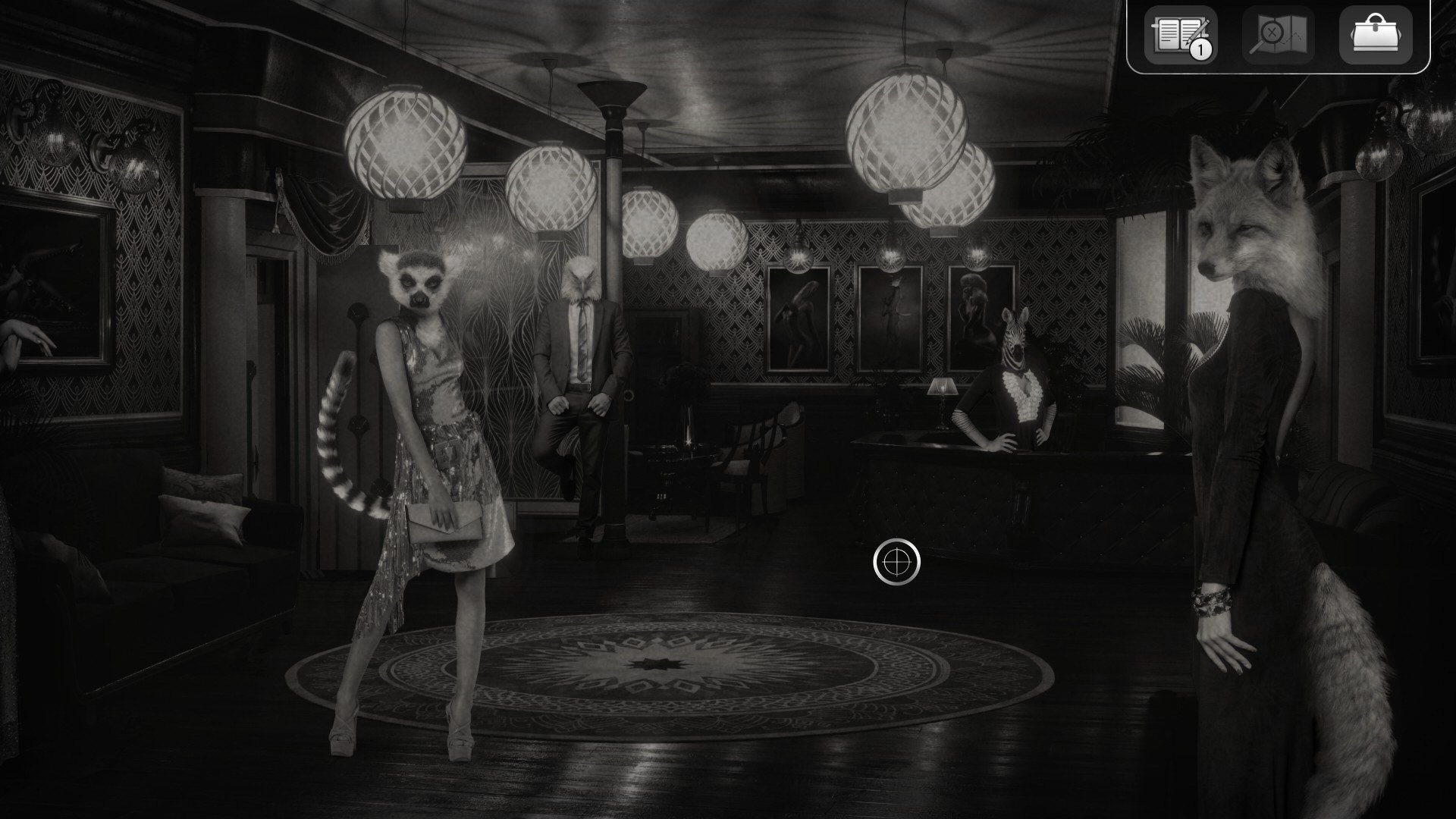 The plot is reasonably good and has some twists and turns. Some aspects of it can be predictable, but the overall execution is still great because the characters are developed so well that we really start to care about them. Every dialogue between Sonny and Marty is gold as they joke and make witty remarks on events and interactions with other characters or simply engage in some banter. 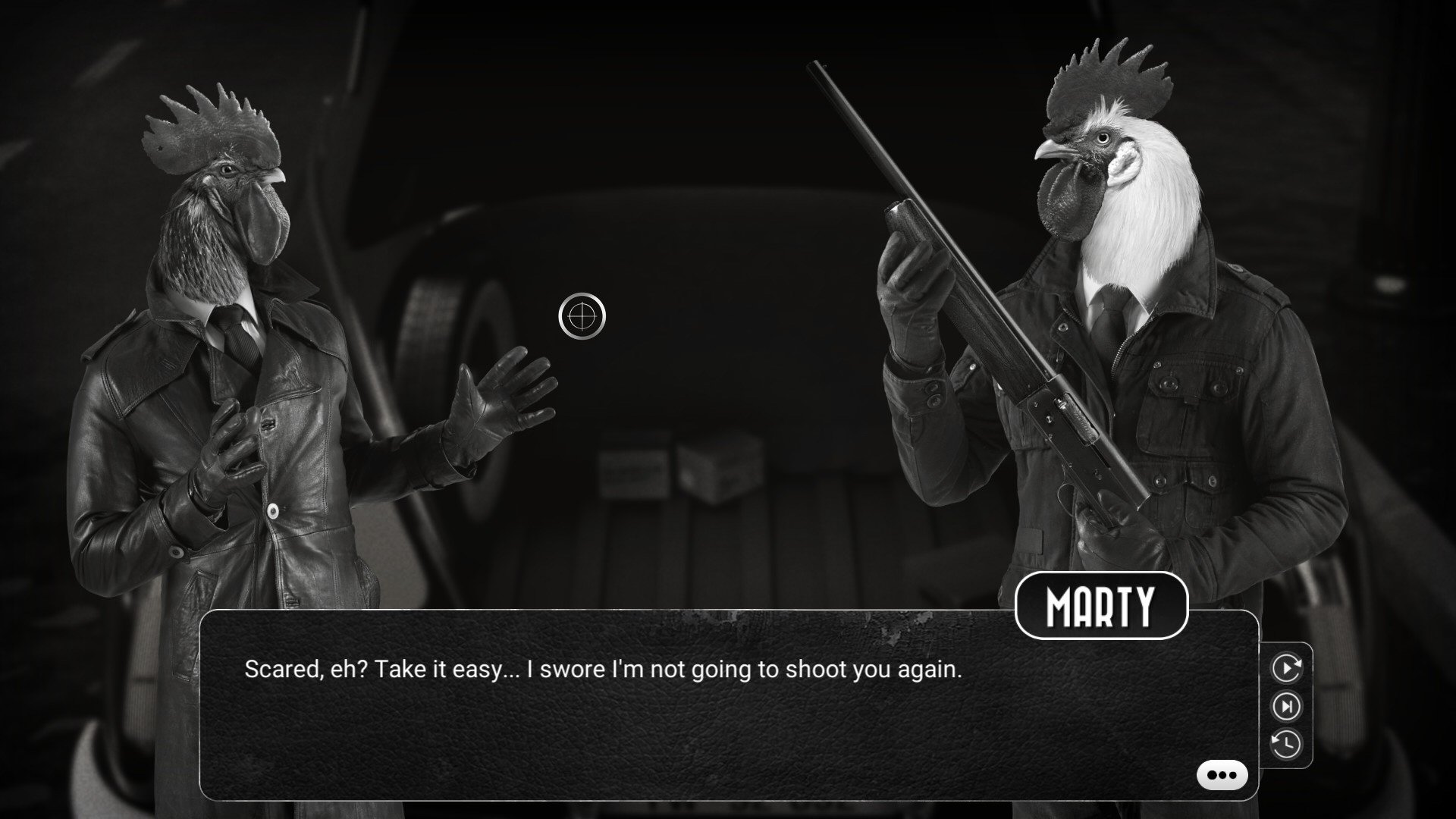 I did hope there’d be some choices to make in the game that could influence some of the events and possibly an ending, but the plot is pretty much linear really and doesn’t give us any big choices to make. Not a big problem of course, but I think it would’ve suited this game to have some branching narrative.

Most of the gameplay is quite casual and straightforward. The game is a visual novel at heart with point and click elements, so most of the game we simply go from one place to another, talk to NPCs, and click on the items in the environment.

During the dialogues with other characters, we often have to ask them various questions to further the plot, and on some occasions we need to interrogate them. During interrogations we are presented with dialogue choices and we need to pick the right ones in order to gain trust with the character we’re interrogating. As we continue to interrogate them, we gather useful information about their personality and the case as a whole. The goal is to get to the end of the interrogation without failing. Failure only occurs if their whole trust in us is lost, which means that making some mistakes is fine, so long as we don’t make too many. With each character being different, we have to adapt our approach, sometimes being blunt and direct, other times sweet-talking them into giving away information. 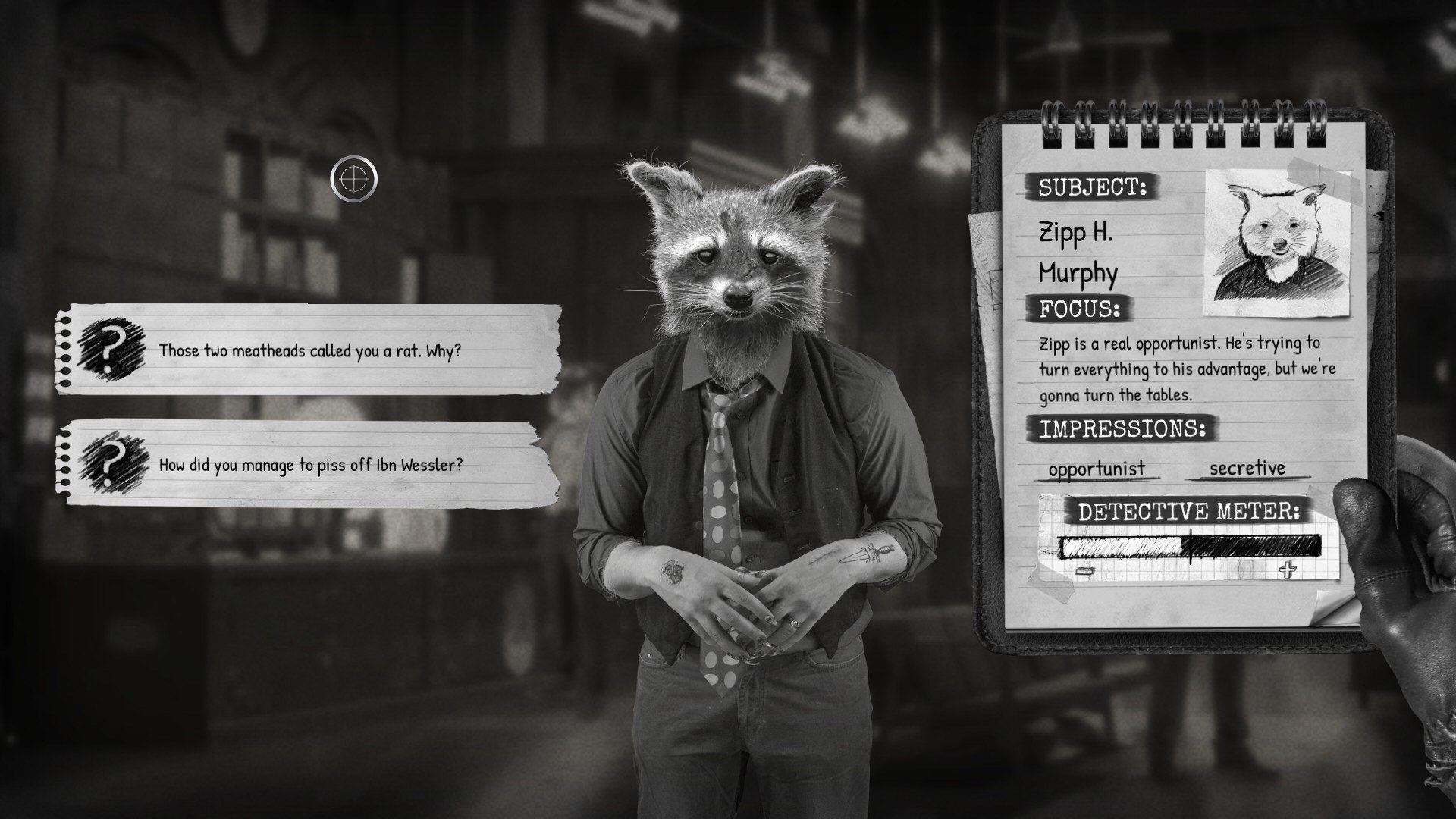 At times we also have some puzzles to solve and mini-games to play. Most of these are quite easy and suitable for a casual experience. The puzzles for the most part can be solved within the area where they occur and rarely ever require any backtracking or use of items from elsewhere. Mini-games take form of things such as matching clues together and a couple of times in the game also as a car chase. 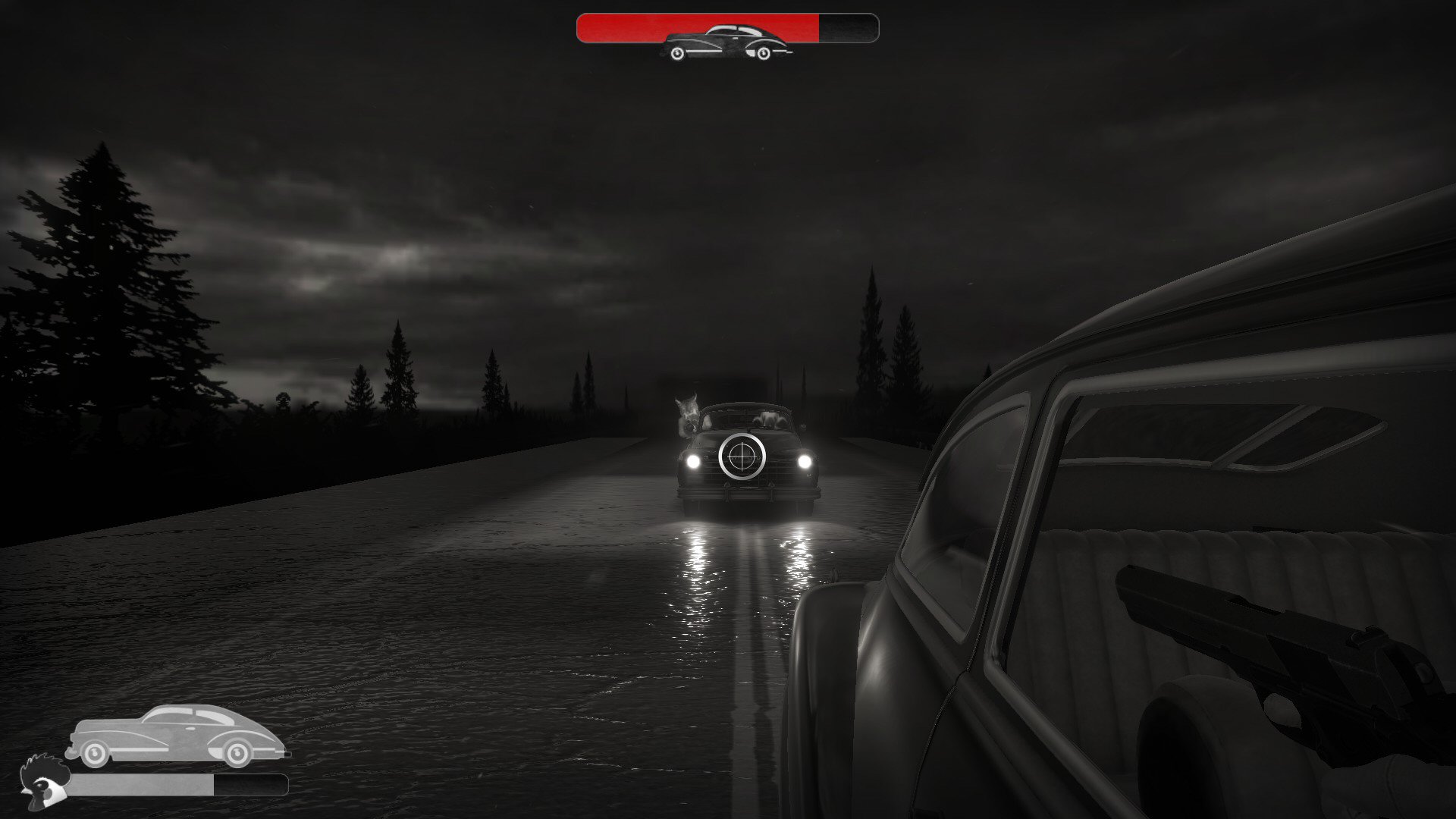 The game’s visuals are superb and incredibly unique. The black and white film noir style is combined with the animal heads on human bodies to give the anthropomorphic animals look. It really is quite alluring and quirky-looking. Some of the characters look downright ridiculous but in a good way. The environments also convey the atmosphere of a rundown city pretty well. 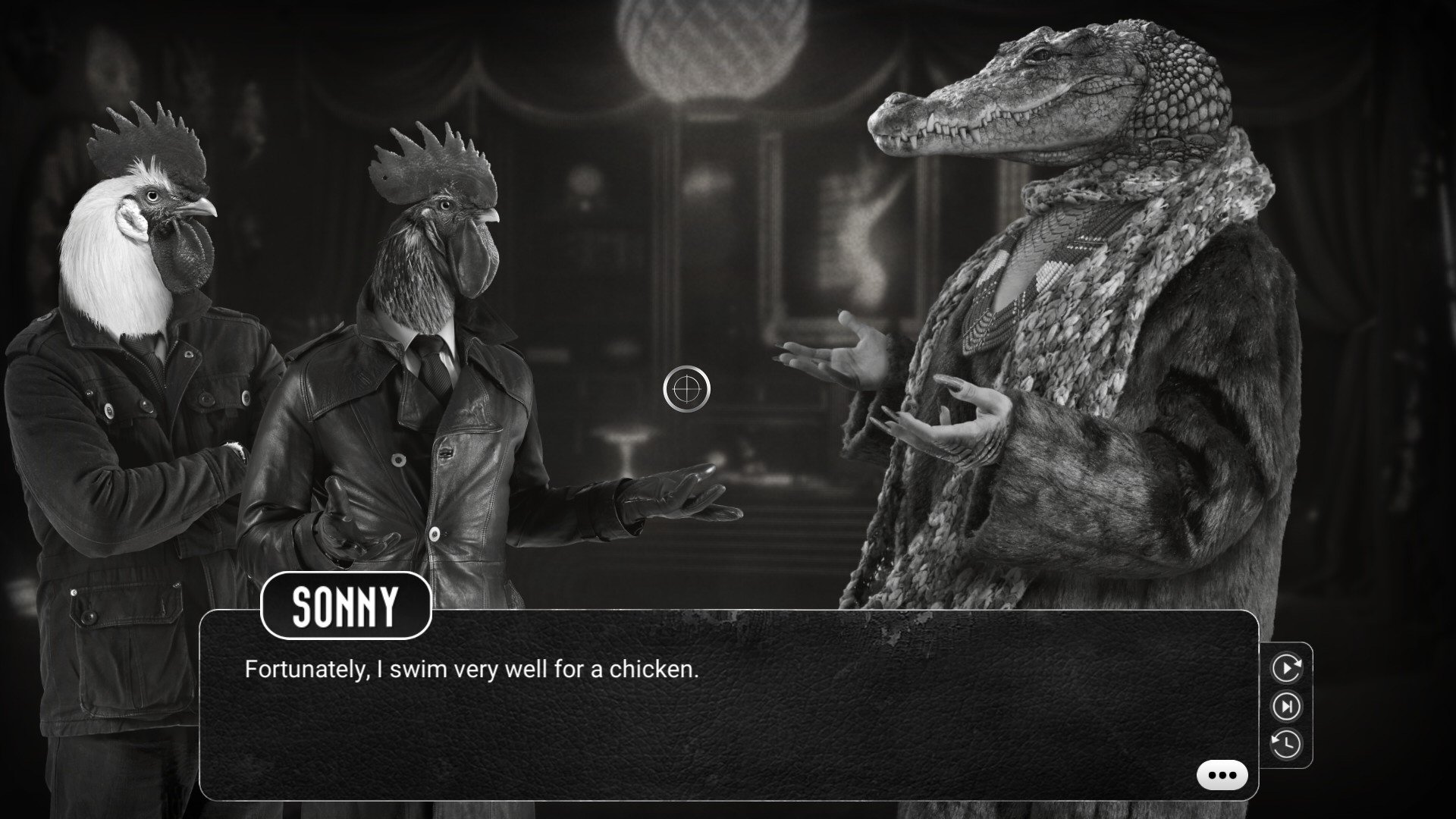 Music is suitable for each scene and works well with everything. Although most wasn’t too memorable to me, a few pieces did stand out, such as the vocal track which serves as Natasha’s theme.

The voice acting overall is top notch for every character. Combined with amazing dialogue lines, it really brings each character to life and makes them seem like real people… err, animals, with unique and realistic personalities.

The UI in the notebook could be a bit clearer. The writing in it looks quite tiny, although the game does allow us to click on each bit of text and to see it written out as a big caption. 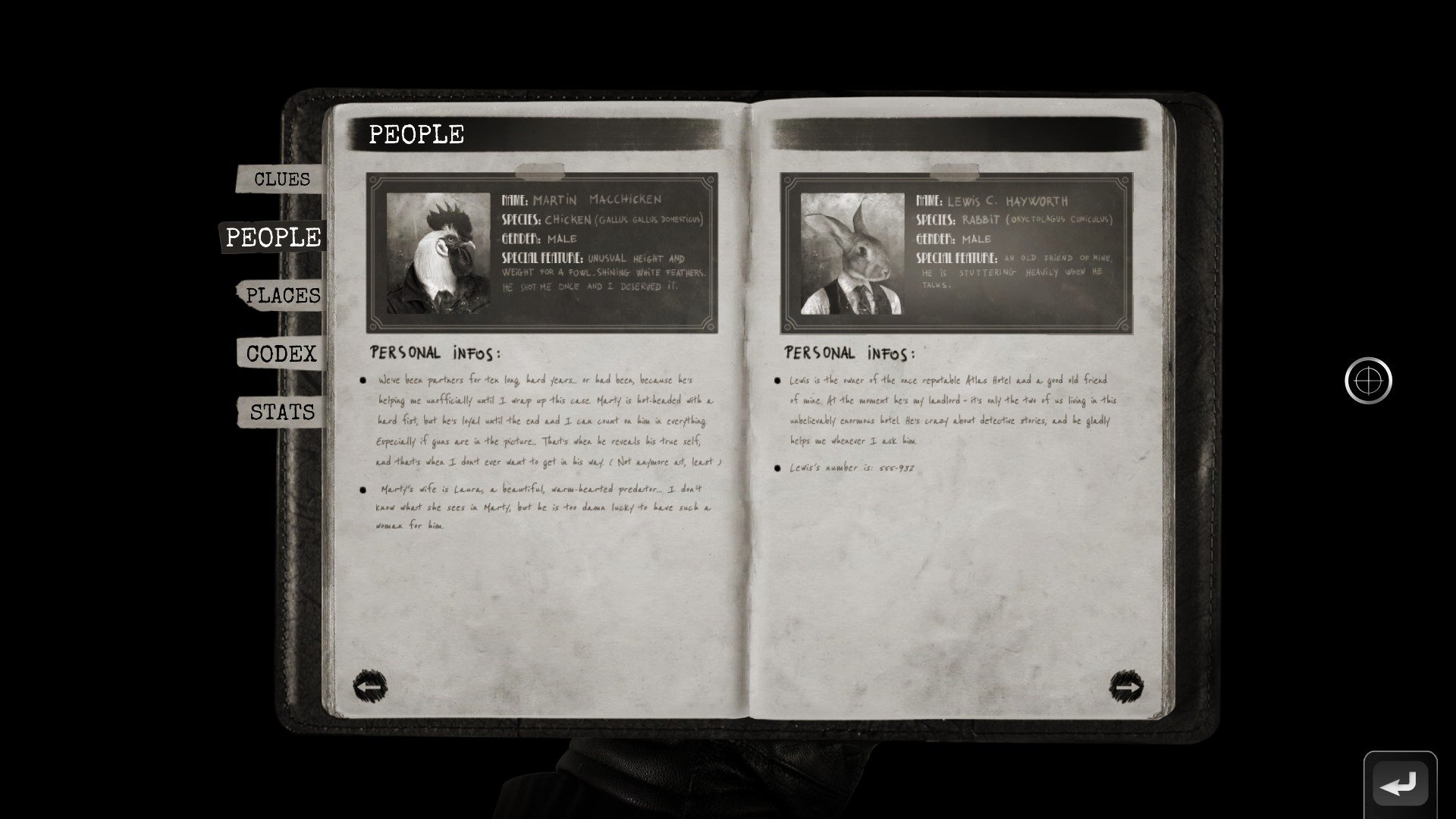 I did come across one bug, where the cutscenes would only have sound and no video. A small number of other players also had the same bug, but devs are already on it, so it should be fixed any day now. (The movie files for each cutscene can be found in the game’s folder, so I ended up watching them there)

Chicken Police is a fun and enjoyable noir story with some really nicely-developed characters and a super unique visual style. It mixes serious and intense moments well with funny and light-hearted bits. Its gameplay is generally quite casual and so suits better those players who are in it mainly for the story. I was very impressed with world-building and how alive the game’s setting was. I sure hope there will be more games made in this setting in the future. Overall, a solid ‘Save’ rating.