A game with unique mechanic that is ruined by the lack of content.

Two races, shared buildings. Khan VS Kahn provides a unique concept where two races, which are controlled by different players, are trying to cooperate together against an imminent threat. However, both races don’t like each other so they are always looking for a chance to backstab one another. Will you kill the other race just because they get on your nerve or will you swallow your pride and cooperate with them to win against the real threat?

The game uses a combination of pixelated and 3D-looking graphics. Although characters look cute in the cutscene, they look weird in the actual gameplay because of the huge pixel size. The backgrounds, on the other hand, remind me of flash games that I used to play in the past – they look simple and decent for its price.

The game has short cutscenes in prologue and epilogue, which serves as a background of the game. Dialogues are automatically advanced with a very fast speed that I had to revisit the prologue several times just to read everything. The prologue also tries so hard in delivering a joke which doesn’t work while the epilogue has nothing special in it. 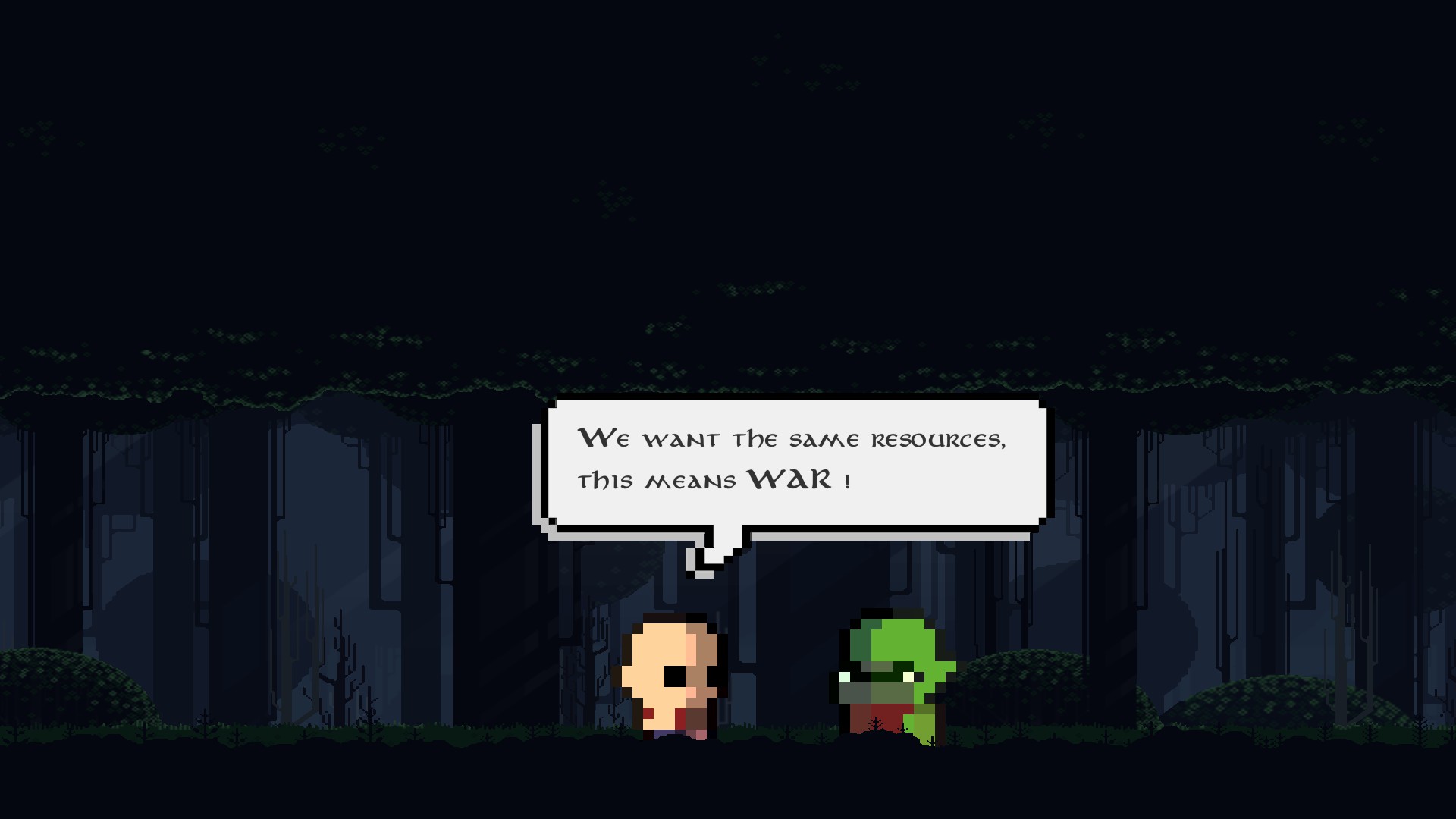 It’s a bit too fast to declare war, don’t you think?

The game has 3 modes: Story Mode, Single Player, and Couch Play. Story Mode is Single Player with you playing as the human and the enemy playing as the orc, with an addition in prologue and epilogue. Single Player lets you play as 4 different races and choose the race you want to play against. Couch Play is the same as Single Player where you can play with someone else (or play both sides yourself) instead of the computer. An online play with your steam friend might also be possible judging from the invite button in the main menu. All game modes can be used to unlock a secret ending that will be activated after you fulfill a certain condition.

The game plays out on a map where you and your enemy do an action in turns. You need to gather resources to build a building and each building has different uses. Some buildings are used for resources, some are used for winning the game. Although resources aren’t shared, buildings are, so the enemy can always use any building that you build and so are you. 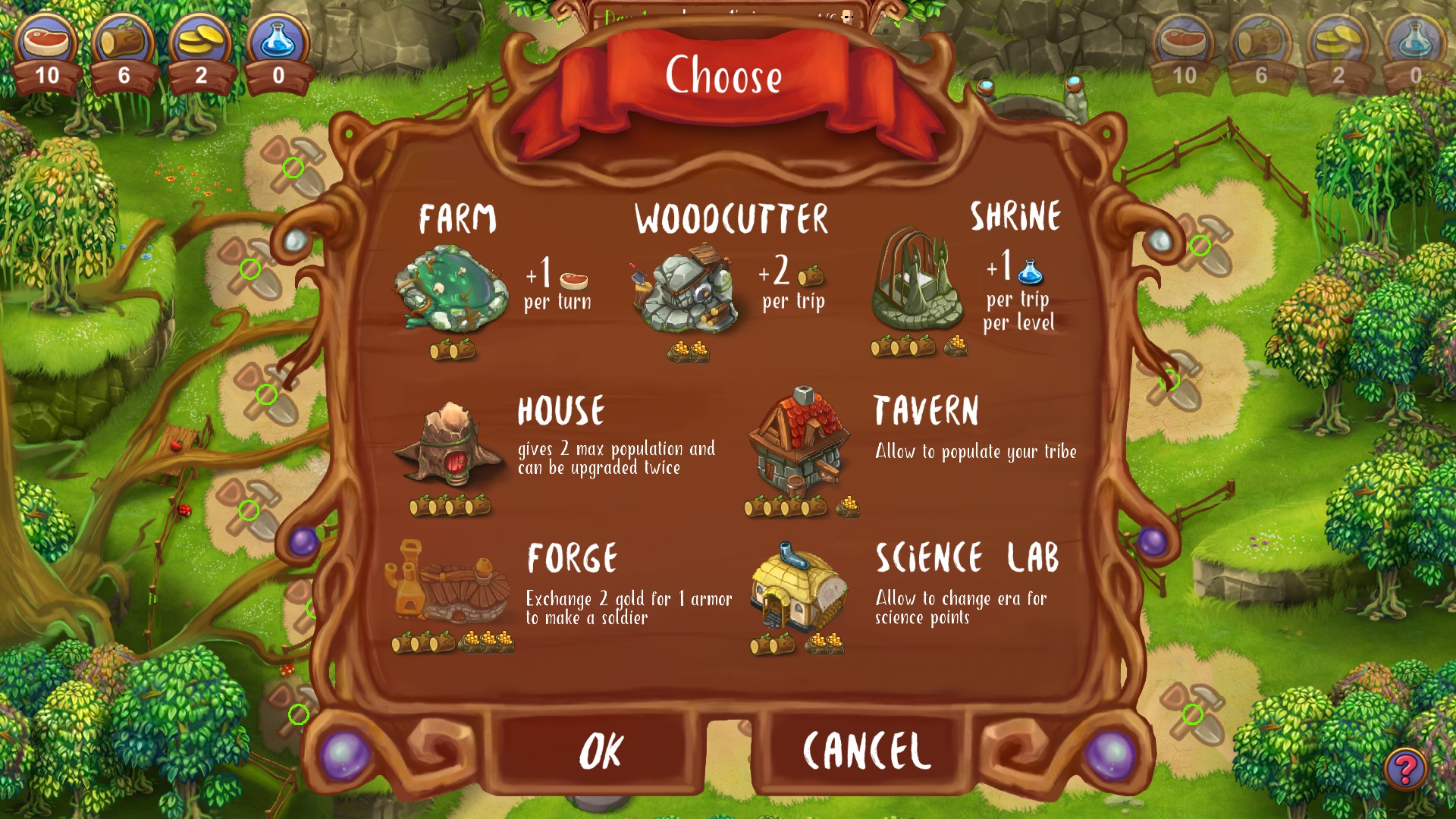 You need to plan which building to build depends on the winning condition that you want to achieve.

There are 4 different races that you can play with: human, orc, elf, and goblin. Each race has a unique trait that can be helpful in some cases. This makes gameplay for every race to be slightly different, especially if you want to corner your enemy.

Since there’s no tutorial, you need to read the help page to learn the game. However, I still couldn’t understand how to play the game after reading it more than once. I had to test it out and lose several times to understand how it works and the game becomes easy afterward.

Each game lasts for a few minutes and there doesn’t seem to be anything new that you can do after you defeat your enemy. You can try defeating enemies in every race, but they are very easy to beat after you know how to win despite the fact that the game treats different races as different difficulty, with the human race as the easiest difficulty. You also can try to win the game in different winning conditions although you should have experienced everything that the game has to offer in less than 2 hours.

It’s a unique strategy game with no content. The game could do well with more levels and harder challenges, but it seems that the developer took an easy way out. Although the game might serve well as a time killer, it might be better if you spend your time playing other games instead. Moreover, you need to spend some time to learn how to play this game and the game finished too fast to compensate for your time. I can only recommend this game if you’re looking for a game with easy achievements since you can get all of them in less than 2 hours.