Feeling retro? Bibou tries hard to mimic retro platformer games where you need to finish everything in one sitting with lesser quality.

You are Bibou. I don’t know what it actually is, but it seems that it lives with its grandfather on a secret island. One day, Cocus invade the island to steal valuable items called yellow stones. Bibou follows the adventure of the creature with the same name to prevent the stone from getting in the wrong hands.

Most objects and characters are depicted in huge pixel sizes and few details. This makes it hard to see some objects, especially in the forest map where everything looks similar. It’s also hard to see which objects can be used as a platform because the game doesn’t distinguish between foreground and background. Most objects also have a square-shaped hitbox despite their shapes, which makes it more confusing especially since you need to stand above them to land.

The game dumps all of its story in a huge wall of text at the beginning and another short story at the end of the game. The story acts as a premise about the game and doesn’t affect the gameplay even if you don’t read the whole thing. However, if you end up reading it, you will be able to understand the dialogue at the last level because everything is connected. The prologue is only a mashed-up wall of texts that are put together to make the ending makes sense though. Some sentences sound a bit off and there are too many unnecessary sentences in it.

The game is a normal platformer game with 10 levels. All levels can be finished in a few minutes although you have to spend more time learning the stage beforehand. You can start from any levels that you want and a boss fight level that will lead to the ending will be unlocked after you finish all levels.

Unlike other platformer games, you don’t have to reach the goal to finish the level – you just need to collect 70 yellow stones instead. This proves to be challenging at the start since enemies and spikes are placed in tough spots. Enemies also tend to shoot a projectile that is not noticeable for first-timers due to it looking similar to the fruits that are located in the background. 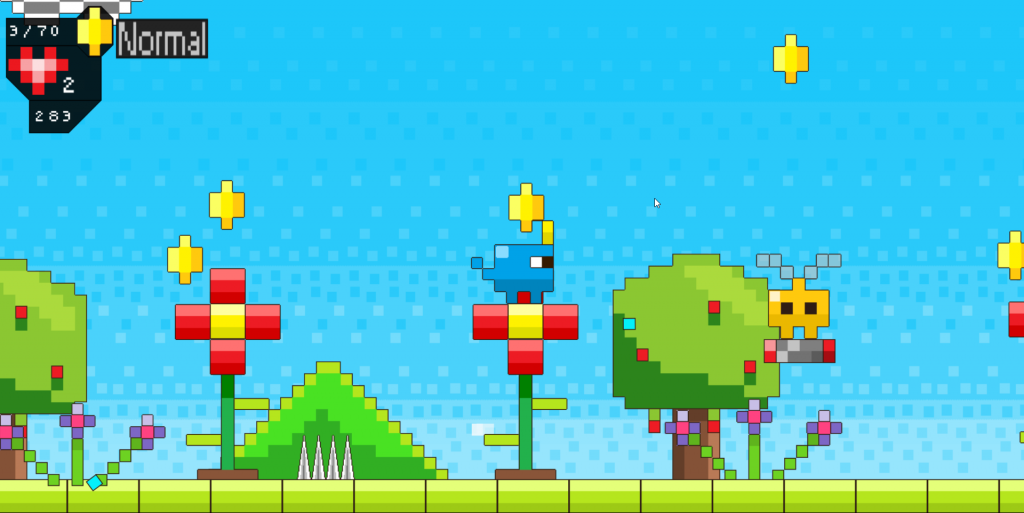 Enemy projectiles are not noticeable.

I first thought that you couldn’t kill enemies. The game manual that shows up when you start the game said that you can attack the enemy with the down arrow, which didn’t work. I thought I read it wrong at the start and believed that I couldn’t kill the enemies – I even had to jump between an enemy that was shooting projectiles to finish a level because of it.

However, this method doesn’t seem to work the longer I played the game since there are way too many enemies to deal with. I soon became frustrated and tried to find the manual again, which can only be seen by restarting the game, over and over again, before I’m convinced that I could shoot with the down button. It turns out that I had to stand still to cast it; no jumping, no falling down, not doing anything. You also need to wait a bit before you can cast after you stopped, which cuts my response time a bit. 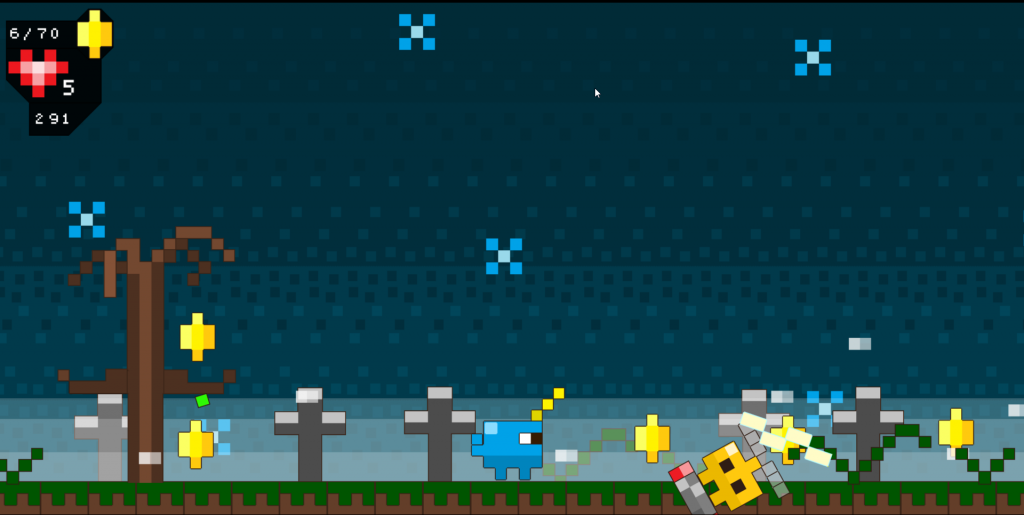 You can press the down button to attack the enemies.

The game gives you 4 hearts at the start of the game. It is also kind enough to give an extra heart that can be obtained at every level except for the last one. However, your collected yellow stones will be reset if you die and you must play the level from the beginning again. You might think that hearts are useless because of this, but mind you, your progress will be reset if you run out of hearts, forcing you to play your previously completed levels again to unlock the boss level.

A boss fight will be unlocked after you finish all levels. It costs me a lot of lives to figure out how to beat the boss although it becomes too easy once you know what to do. The best part of the game? Your save will be wiped out after you finish the level. Smart decision.

The game provides two difficulties: easy and normal. Easy mode has fewer enemies and obstacles although it still proves to be a challenge with the enemies and obstacles presented at every level. I played the easy mode and finished everything in 2.8h with the last run taking ~30 minutes to finish. The rest of my playtime was my failed attempt as I learned to finish the levels. 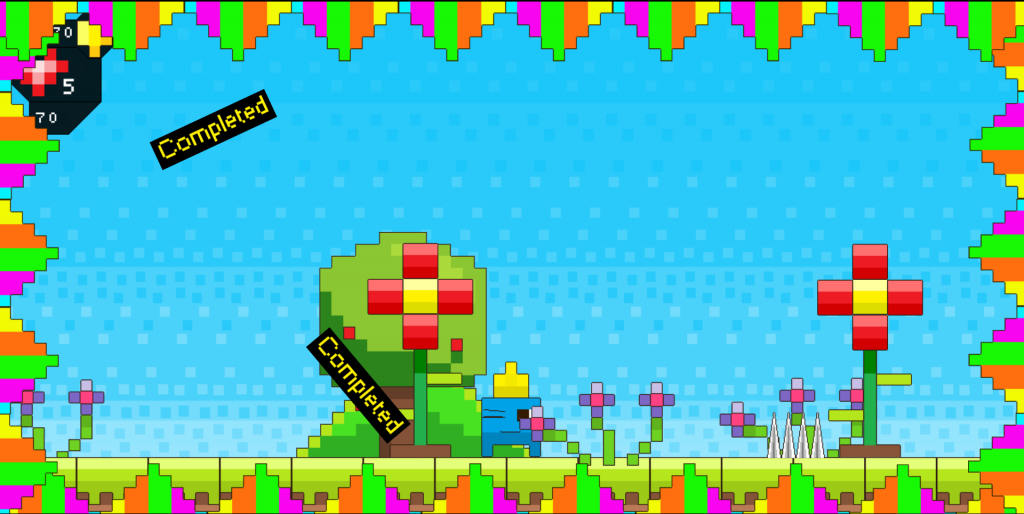 It’s satisfying to finish the level because of the hard difficulty.

The game also has an optional minigame where you have to click on falling obstacles and let Bibou take the yellow stones. You just need to focus on the obstacles since Bibou will automatically run left and right. However, the minigame is very slow and I didn’t see the difficulty to be increased after I collected 9 yellow stones, which surprisingly takes a long time to obtain because of Bibou’s slow and random movement. The game is also bugged when I played it after I finished the main game since there are no obstacles nor yellow stones that are falling down. Strangely, the minigame score is the only thing that the game saves.

This platformer game tries to mimic retro platformer games where you must complete everything in one sitting. However, it doesn’t work well because of the weird-shaped platforms and strange attacking mechanics where you have to stand still to attack. I had fun after I know how to finish the level, but the game is too short to justify the price, especially since there are better games that you can buy at a similar price.