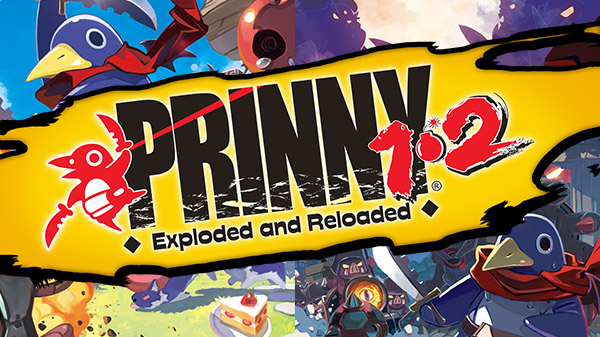 I wrote an article about game series/spinoffs that I’d like to see making a return back in 2019. I also may have made an honest mistake in that article but that’s water under the bridge 🙂 Prinny: Can I Really Be The Hero? was one of the 5 series that I mentioned. I also went on about how I long for a new game that’s never meant to happen due to the impossible task that Nippon Ichi Software set for the Prinnies. Well, it seems that my prayer was heard….but by a monkey’s paw. We do indeed get a new game but it’s a port instead of a sequel.

As the name implies, Prinny 1 & 2: Exploded and Reloaded consist of the two Prinny games on PSP: Prinny: Can I Really Be the Hero? and Prinny 2: Dawn of Operation Panties, Dood!.

Both games feature a similar story and gameplay. The stories boil down to an unknown demon stole Etna, the Prinnies’ master, dessert/underwear. Pissed but ultimately too lazy to do it herself, she orders her a troop of 1,000 penguin-shaped servants to take care of it or faces her wrath. In case you have never played Disgaea before, the Prinnies explode when thrown. Knowing this, Etna bestows one of her avian demons a strangely familiar-looking scarf. She then proceeds to throw the unfortunate Prinny in her vicinity, and what’s this? To everyone’s surprise but the demoness, our scarfed friend didn’t combust on contact with the solid ground!

Prinny 1 & 2: Exploded and Reloaded has the same humorous tone as Disgaea. Despite the drastic change in gameplay, Disgaea fans will still feel right at home in other areas. The music is composed by the series and Nippon Ichi Software staple, Mr.Tenpei Sato! Pun-tastic jokes, Prinnies being abused for laughs, and reference to the main series are everywhere. Maybe even that certain blue-headed Demon prince will make an appearance?

Don’t worry. The Prinnies can and will still explode. It’s just that they can now take up to 3 hits to meet their demise.

The gameplay of Prinny 1 & 2: Exploded and Reloaded is very simple. It’s an action platformer. You pick a level, get to the end, and beat the boss, Mega Man style. Basic action includes a dash, jump, and attack. Sounds like a normal platformer deal, right? Wrong. Dead wrong.

The jump doesn’t work as you’d expect in a normal platformer like Mario or other modern platformers. You cannot control the height or influence the momentum of your jump. It doesn’t matter how light or hard you press the button. The Prinny will always jump at the same fixed angle and height. This makes the platforming aspect of the game quite challenging. Every jump, double jump included, is a commitment. The kind of ultra-precise jumps that you have to make here is not dissimilar to the retro games of old like Ghost n Goblin or the early Castlevanias. Yes, it’s by design.

Your move repertoire opens up a bit in Prinny 2 with the introduction of Break Mode. This mode is achieved by getting the combo gauge to max level done by stunning multiple enemies via hip pip pound in a row. In Prinny 1, all this would do would just give you a better score or regain a hit threshold but the sequel adds more to that. Break mode gives Prinny new moves like Husky Hip Pound, Prinny Kamikaze attack, and Prinny Cyclone which are the enhanced version of your basic tools, giving you more options to toy with.

Regardless if you are playing the first Prinny game that has a more limited moveset or its sequel, it won’t change the fact that the game is hard. The clunky retro-Esque mobility makes things difficult when getting from platforms to platforms. The game gives you 1000 lives for a good reason. The developers know exactly what they were doing designing the levels. This becomes abundantly clear on some of the platform puzzles. They are strategically placed such that only the perfect jump with the best angle will get you from point A to point B. it will take several tries but don’t give up. Practice makes perfect.

The same is also true for the enemies and bosses. In platformers, they would be a piece of cake. Not here. Not with what you have access to in this game. Their attack patterns are simple but it doesn’t matter when you can’t steer your momentum midair. There are also situations in which you get hit once and get knocked back into the pitfall fall causing instant death regardless of how many hits you can still take. It takes patience to master the enemies but when you do, it’ll feel like you are on top of the world.

Once you are on top of the world, how about venturing into S-P-A-C-E? How about try climbing the world over again but taking alternate pathways? Like its mainline counterpart, Prinny 1 & 2: Exploded and Reloaded has immense replayability. Levels change when they are played in a different sequence. The later you play them, the harder they become. Not only do they now feature harder and even indestructible enemies, the bosses, story dialogues, and collectibles you get will also be different.

Tackling the game again on Hell’s Finest mode, where you die from 1 hit, makes it an entirely new beast. With no later chances to fall back to for each life, your gameplan from normal mode will need to be changed. No more cheese. Your approach will need to be more methodical, more precise, and better thought-out. If not, you will see that 1000 lives flushed down the drain in no time.

Save for the fact that, the games now feature dual audio language, Prinny 1 & 2: Exploded and Reloaded is almost identical to its original counterpart to a fault. This includes the minor performance issue resulting in a slowdown in some really specific parts and the exact same vision. I can excuse the former as it’s a rare occurrence. The rest of the game runs fine. The latter, not so much.

It is jarring to see the old sprites still being used when all the past few Disgaeas have all used HD sprites. Those are new games, sure. However, let’s not forget that the original Disgaea was upgraded to Disgaea 1 Complete that replaces all the old sprites with HD sprites. Considering that original Prinny games already reused a lot of preexisting Disgaea assets, I feel it is lazy in a post-Disgaea 1 Complete world to not at least touch up the visual. You know, bring it up to par with the series’ current standard but it is what it is.

Prinny 1 & 2: Exploded and Reloaded is exactly how it was with the originals: an acquired taste. It’s definitely not for everyone, even fans of Disgaea. Thankfully you won’t miss much if you were to skip it. The story of Prinny 1&2 is chiefly a side story business that almost has zero bearings for the main series. Stick around and you will be rewarded with the minor things that further flesh out the world of Disgaea.

If you can get into the retro-style of maneuverability with the difficulty and limitation that they entail in an action platformer game, this is going to give you one hell of a challenge.