Taking place after an unknown number of years after the first game, Professor Lupo and His Horrible Pets, we are getting a glimpse into how it’s going for the Intern after he narrowly escaped being dinner for some alien pets, ejected Professor Lupo, and took over the Aurora Space Station. Well, the fact that we are getting another game set in the same universe is all that you need to know that things didn’t exactly go as wonderful as Intern and Fire envisioned.

In Professor Lupo: Ocean, we open up to a grim sight and the reason behind the title. The Aurora Space Station once strong has now crashed into an ocean of an unknown planet. Pieces of that station slowly breaking off as the time passes and as we get the view of the inside, we see one pod currently occupied sliding down into the water. As it falls deeper into the ocean, it becomes apparent that there isn’t a safety mechanism in place to keep the pod closed as it slides open without much resistance, dooming the poor girl to drowning. Though, luck seems to be on her side as a strange alien, which those who played the first game will recognize as a Furax, weirdly saves her by giving her a collar that will let her breathe underwater.

Once she gets back onto the Aurora, we find out that she doesn’t remember anything and is named Clone by our old friend Plato, the Aurora’s AI, who also tells her that she has over a thousand tasks to complete. It’s not long before you’re contacted by a mysterious female voice telling you to not listen to Plato. Over the course of the game, you’ll need to find what what happened during the timeskip, where Intern and Fire are, who is the mysterious voice contacting you, and what caused the Aurora’s terrible fate. 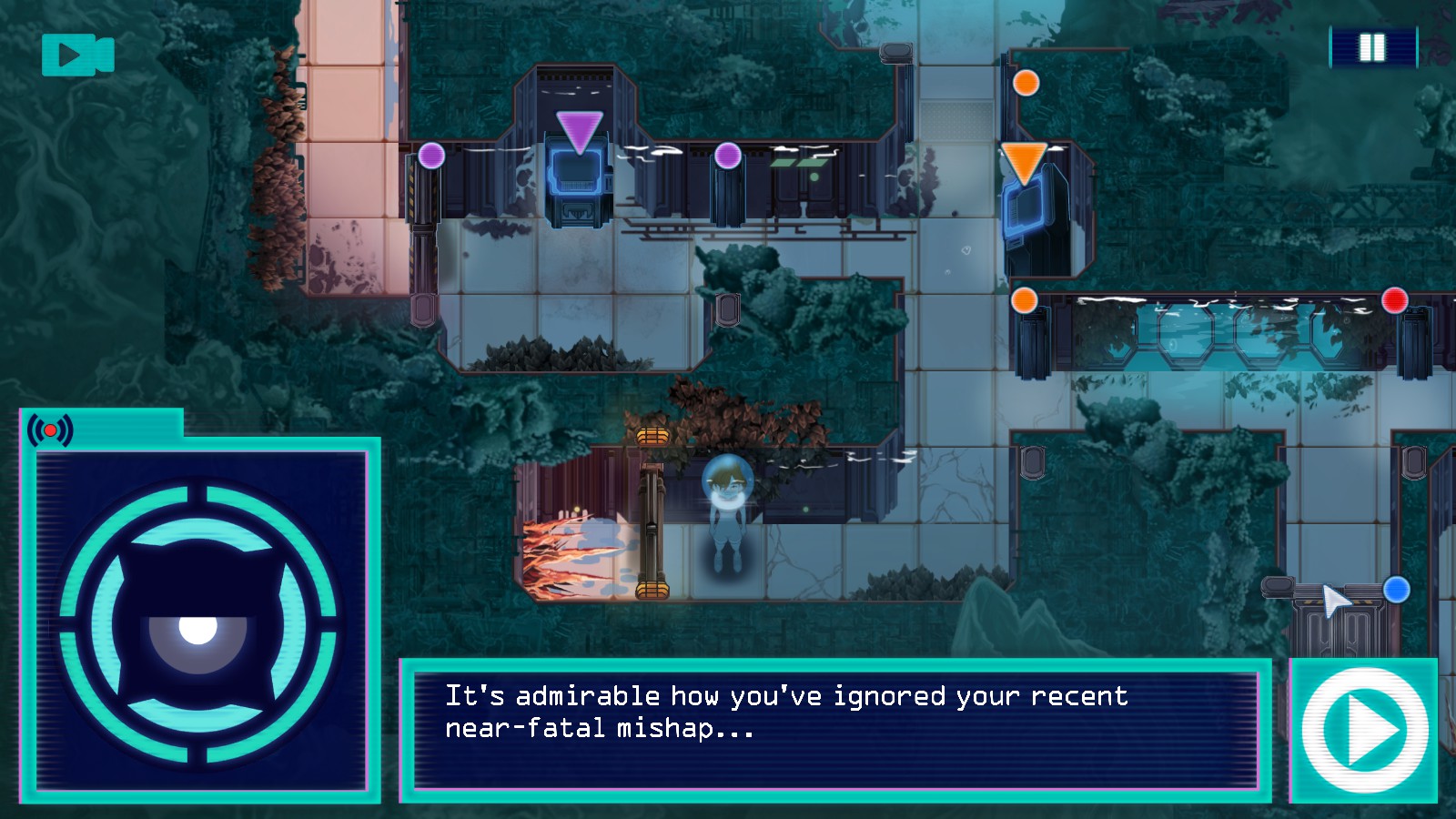 Professor Lupo: Ocean plays much like the previous title. Each level is its own puzzle that you have to solve and navigate through safely to an illuminated square. Movement is dictated by a grid and Clone’s collar lets you click on certain doors to open and close them anytime, while some doors require you to go to a control panel. However, there is a catch (and I’m not talking about the aliens with the taste of human flesh). As you may of guessed, you have to use the water flooding the Aurora to your advantage to solve puzzles. Complete sections of the level may already be flooded, with the only thing holding it back is a door or an energy wall, or waiting to rush in behind a closed door. Opening a door with water behind it will cause the water to violently flow in, catching anyone in the way, and won’t stop until it hits a dead end and balances. This can easily lead you into the path of an alien or impale you on the sharp coral that has already attached itself to some of the walls. 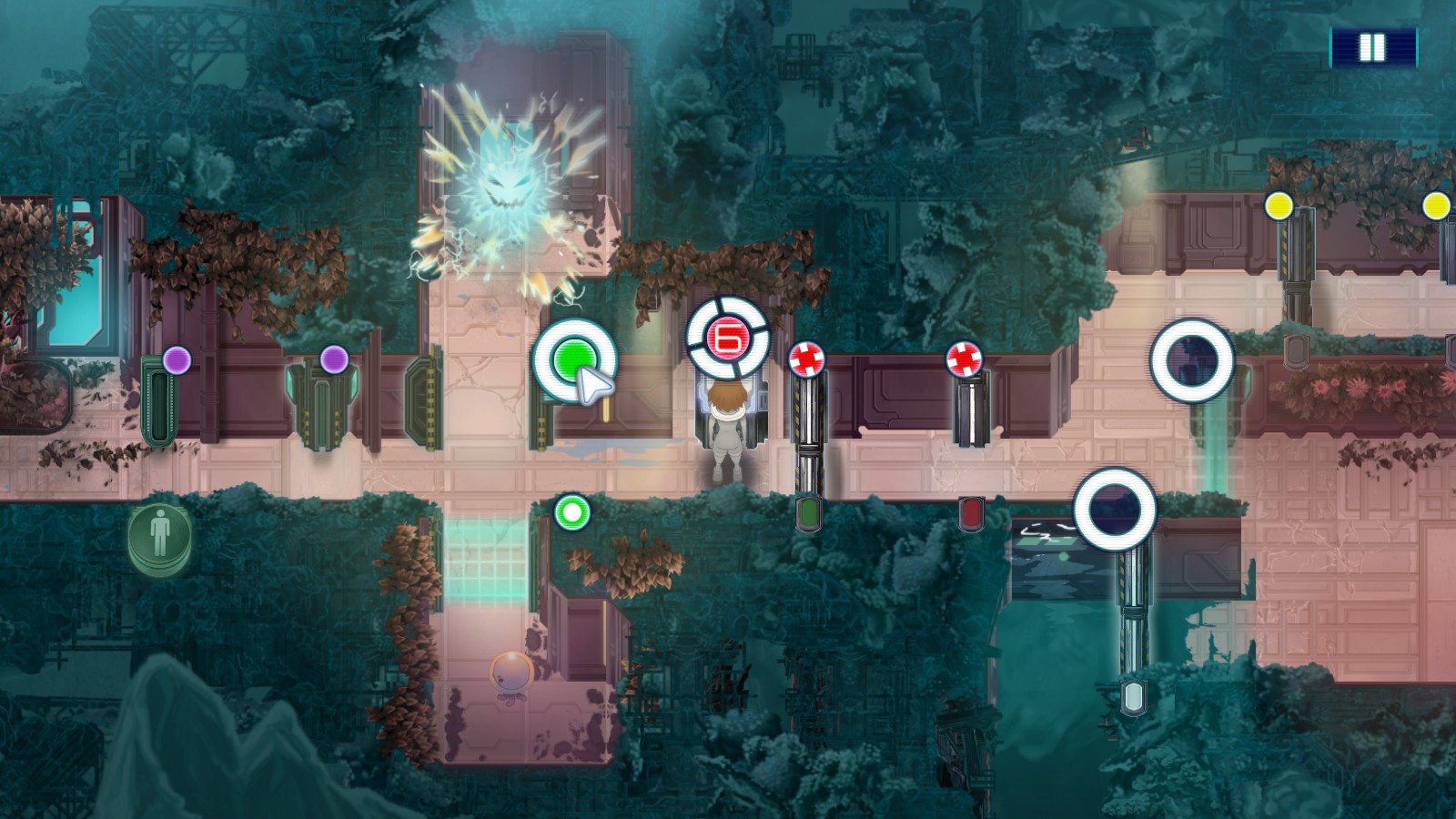 Of course, this wouldn’t be a Professor Lupo game without the aliens that roam each level. Like before, each alien won’t hesitate to kill you, but their unique quirks can be exploited. Once you come across one for the first time, Plato will give you an entry to learn more about them if you don’t want to figure it out as you go. Some are new to go with the new water puzzle element, while the others are ones are descendants from those that appeared in the first game. One of the new aliens is named Orbis which in water looks like a cute ball that will quickly transform into a terrifyingly fast shark once its prey enters its waters. The only way to escape is to use doors to force it to take the longer path to you by closing off the closest one with a door (or distract them with their other prey, Spores). Though, if they find themselves on land they become a bloated spiked ball that will only try to roll over you if you walk in front of them. One of the returning aliens is obvious the Furax, but a more dangerous variant that traded some of its intelligence for a pouncing move and the ability to quickly swim through water. They also have a habit at destroying doors if they detect there’s a change of pressure (ie one room is filled with water and the other isn’t) even if it means they’ll be pushed back by the water flow. 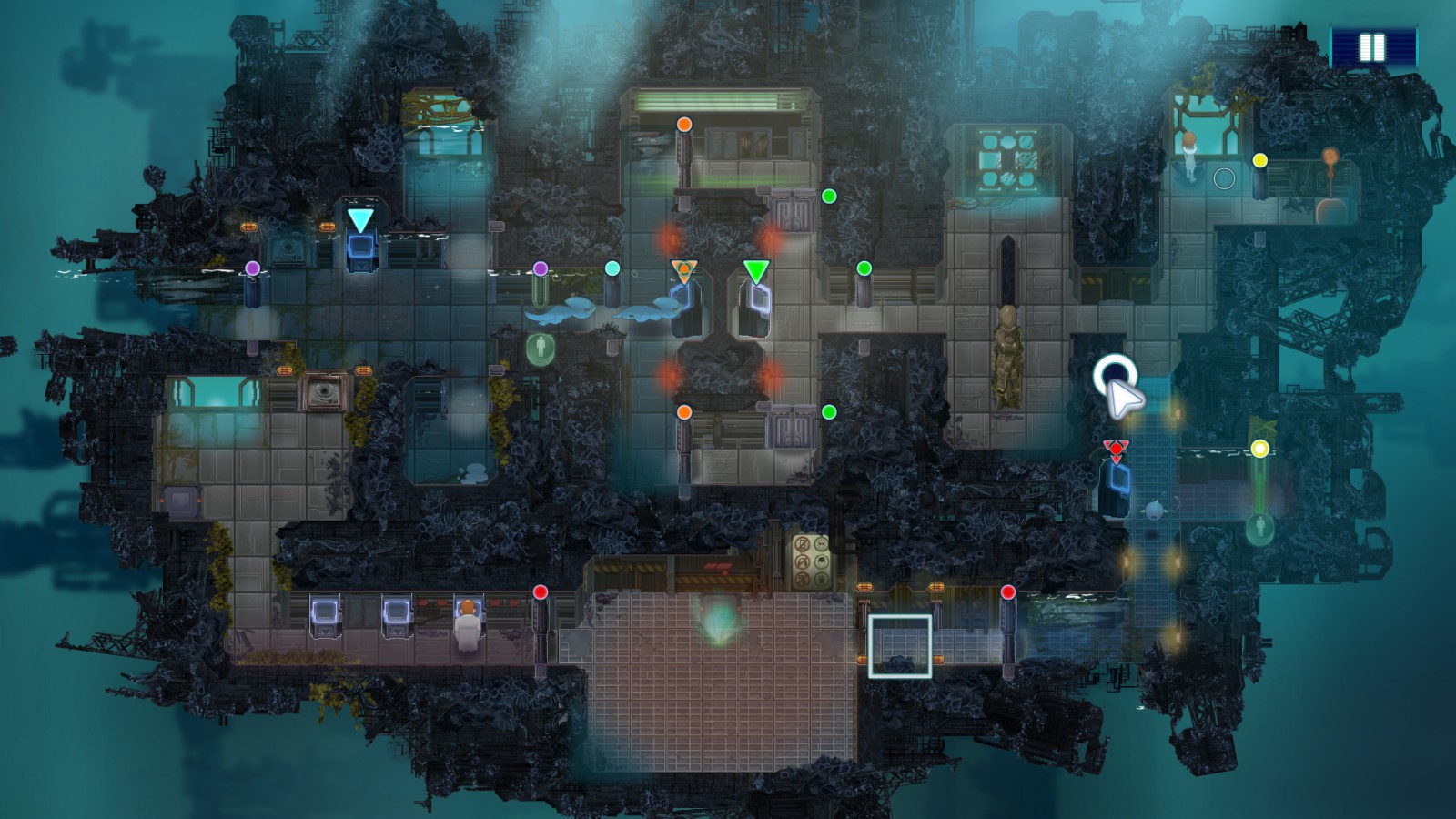 Luckily, compared to the first game, this one doesn’t rely too much on your timing being perfect. The majority of the levels just require you to figure out what to do rather than doing it to the absolute second. Don’t get me wrong, there were still levels I got stuck on just because I was a second off on my timing, but it wasn’t so bad that I was stuck for two hours. Though, this installment doesn’t have a clear indication on where your checkpoints are. This is due to Clone canonically not dying as she’s progressing through the Aurora, but it can be annoying especially when you thought you hit a checkpoint, only to respawn right before the section that you seem to die at 99% of the time. 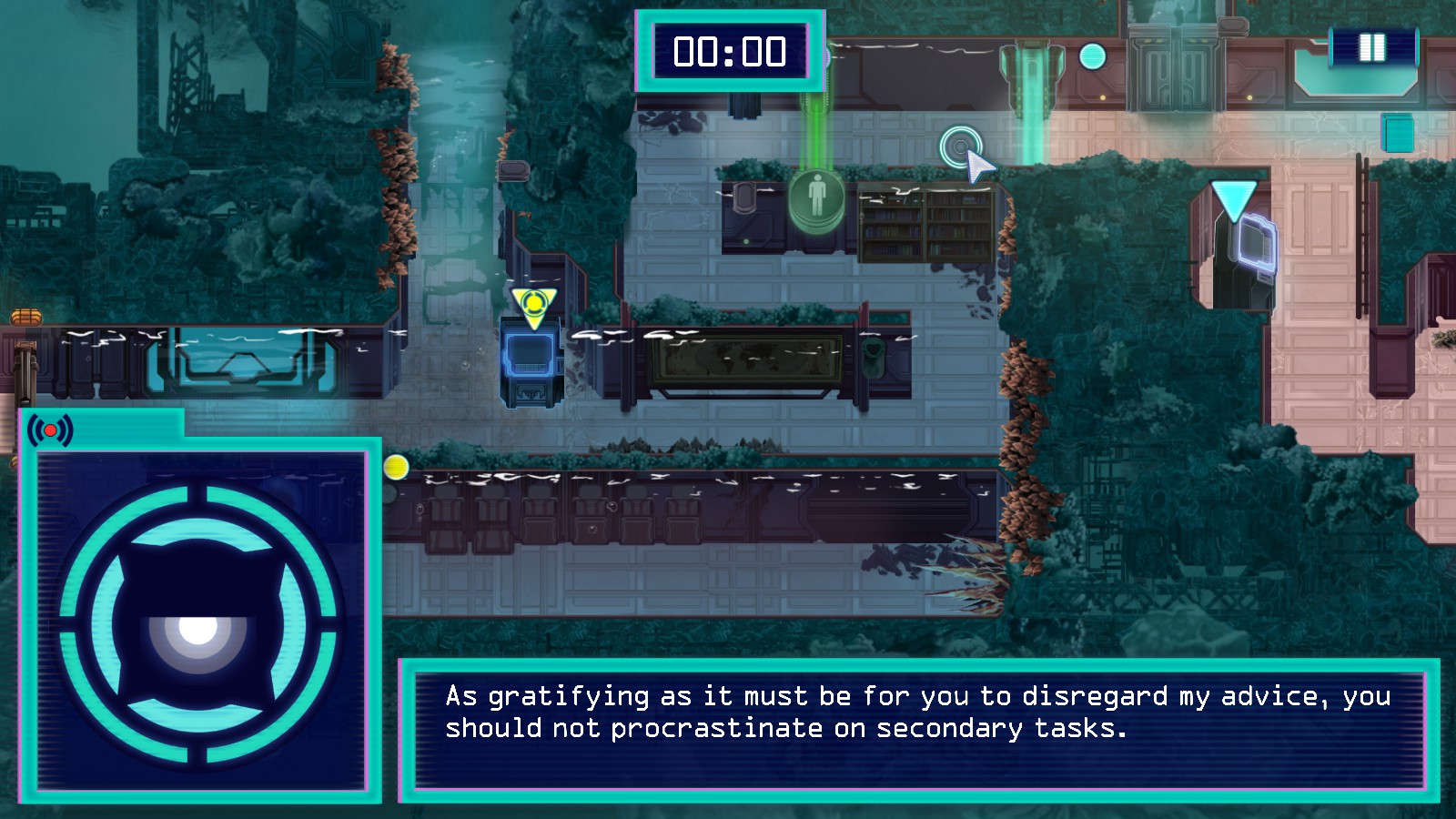 To give you more of a challenge, most levels have optional tasks for you to do. If you want to complete them, they’ll require you to figure out how to complete a level in another way. The task you’ll most often come across will be collecting these book holograms that will give you information on the people that once resided in the Aurora. The other tasks will have you figure out a way to kill a specific alien, solve the puzzle without killing an alien, or have them standing on a detection zone. Though if a level challenges you to complete two tasks that isn’t collecting a book, it will often require two runs. If you complete all tasks, an alternate ending will unlock.

As this is a sequel, I’m sure there are those wondering if you need to play the first game. After completing this game, I don’t think you necessarily have to. Professor Lupo: Ocean does reference Professor Lupo and His Horrible Pets, and the reveals on what happened after the first game won’t hit as hard, but you do get a quick overview. It certainly does help that this game takes place after a timeskip, so it can easily fall into the unknown in that regard. That said, I do recommend checking out the first game. It has 60 more levels, and also more story to it, but more levels there rely on you getting the timing perfectly.

The sequel to Professor Lupo and His Horrible Pets came to a total surprise to me that I knew I had to pick up to find out what happened to Intern and Fire after the ending credits. Even if you played the first game or not, Professor Lupo: Ocean is still a great puzzle game that will challenge your solving skills with a touch of timing. Luckily, this sequel doesn’t have a lot of situations where having your timing down to the second is important to continuing, but there’s no clear indication where the checkpoints are and the quick alien introduction animations will surely be missed.