Considering the size, limited budget and skill level of the team behind Mysteria ~Occult Shadows~, the crew came up with a pretty decent offering.

I am no stranger when it comes to Japanese Action games and find them quite enjoyable especially if they have interesting mechanics behind them. I can often overlook small issues if there are enough interesting features to keep me coming back. Mysteria ~Occult Shadows~ has recently released from Early Access although even the Developer identified it might have been a bit soon for that, but they were at the limits of their abilities and their budget. It is a very ambitious title for a fledgling Developer, and it did turn out rather well.

Let us get the negatives out of the way first and then get into the positives. Mysteria ~Occult Shadows~ does suffer a bit from translation issues which leaves the story a bit confusing. These translation errors (difficult to comprehend sentences or plain typographical errors) are scattered heavily throughout the story and the most prevalent one is in the tutorial/dialogue prompts. It often says to press the “botton” to skip rather than press the button. It is a minor spelling issue and not one that leaves you scratching your head trying to understand what the game is asking for, but it is a great example of the textual issues the game has in store for you. Another annoyance and this one actually bugs me quite a bit is the fact the text sometimes doesn’t even finish displaying on the screen before it is whisked quickly away for the next line of dialogue. Coupled with the already awkward English it makes the story even harder to understand. The camera was a bit clunky which made it awkward in battle having to turn it so you can actually see what you are doing. If it snapped or followed a bit better rather than relying on the player to constantly manually adjust it, it would have made for smoother gameplay. It also awards you with a bunch of achievements after the first battle with some of them sounding like they were meant as end game achievements (or maybe I was just so awesome the game knew it was beat before I started!) The last thing that is kind of a deal breaker for me was the fact I would on occasion fall through the ground usually during battle. It did not happen often and was hard to replicate but all the same it was still disappointing to encounter especially if I was winning. 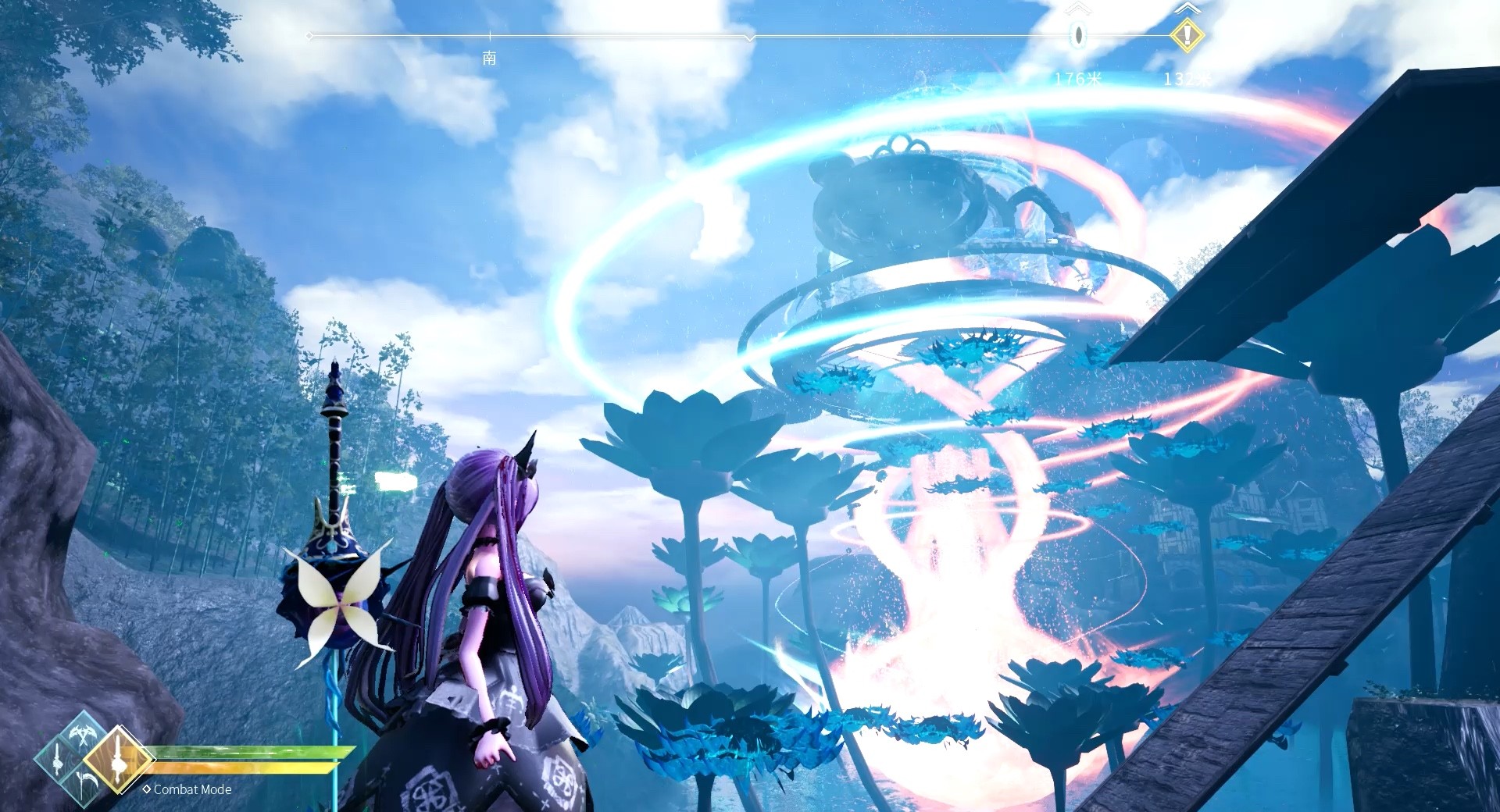 If you ignore the Critical Review above, the game does have something to offer. First off, the combat, while it is rough around the edges and very repetitive actually has a lot more to it than meets the eye. There are four difficulty settings to choose from and the highest difficulty promises to reward you with unique items if you play it on that level. The only real difference between difficulty settings I could notice was that the enemies tended to be a bit more of a damage sponge taking a lot more hits to bring down on hard; while on easy they tended to only tickle you when they hit you. There are three primary weapons available to you at the start of the game as well as items you can use. I rather liked this feature as it let me change up the gameplay a bit. The chainblades were my favourite although they did not really allow you to block attacks against you; you could still dodge with them. Swinging a decently long-range set of weapons around was quite a bit of fun. The sword was kind of generic but allowed for the most accuracy and coming in the middle was the cool looking scythe weapon that was decent at medium range but wasn’t all that accurate I found (when targeting breakable objects). You can switch between weapons very quickly on the fly so you can change up your tactics at any time without going to a menu. The game also has some forgiving quick time events for you to enjoy which usually is some kind of finishing move on the enemy. One of the first battles you do has you climbing up an enemy (using your weapons to make hand holds) and then stabbing it in the top of its head with blood squirting out as you go. Another nifty feature which I have to say I have not really seen that often is battle scars appearing on your enemies as you slice away at them. Everywhere your weapons makes contact leaves a mark on your enemy so when playing on hardest settings you start to feel bad for how much pain your adversary must be in before the battle is over (often in a rather cruel finishing move). 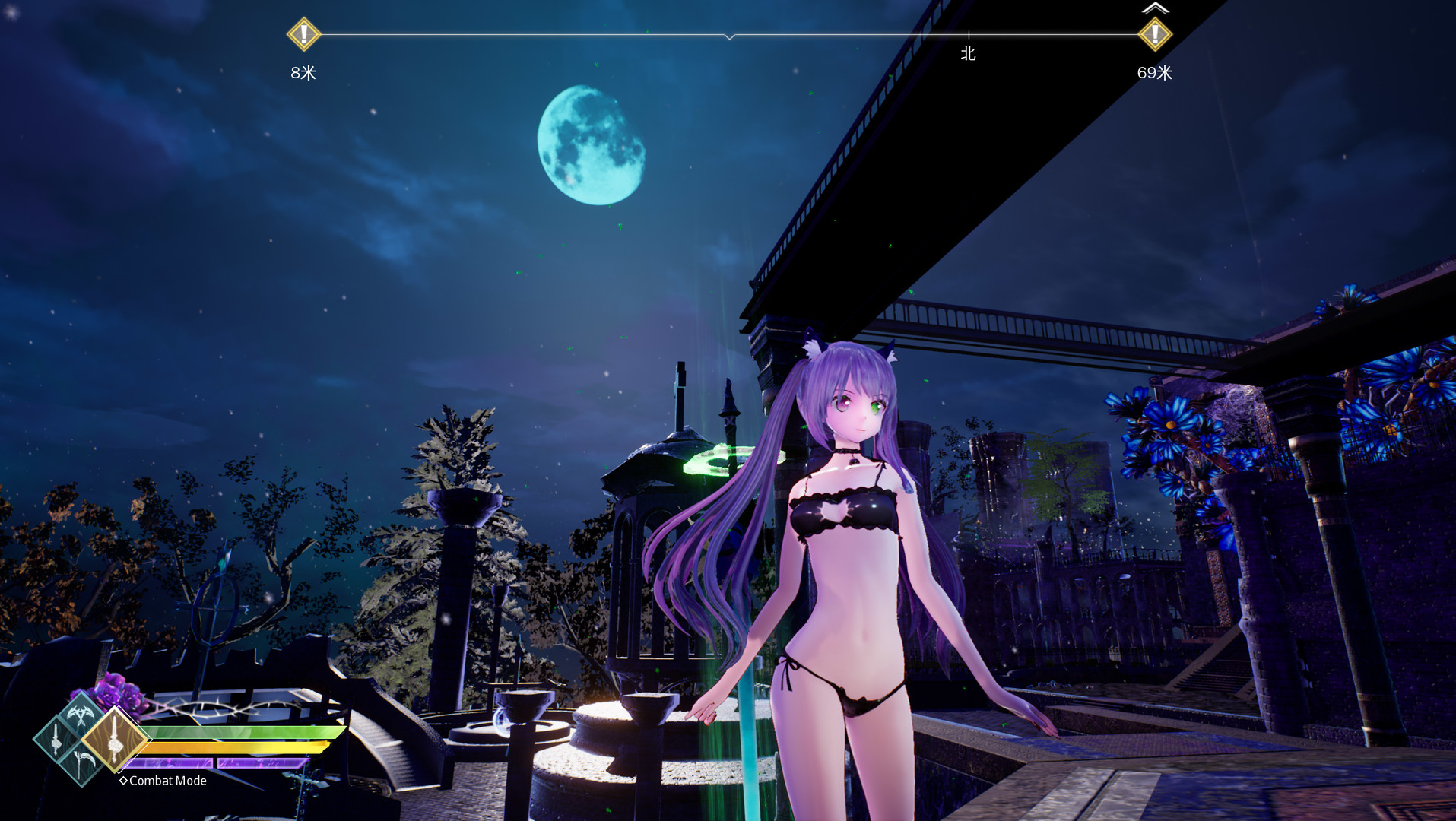 There are various areas for you to work your way through with mild puzzle elements for you to contend with. It is generally not too hard to find where you want to go and even if you get lost. Often times you will encounter a chest to reward you for your trouble. It is mostly a matter of having a keen eye looking for symbols that indicate you can leap up to that high spot, zip lines to get down or puzzles to solve such as melting ice to release bridges. Each area you go to is quite detailed and enjoyable to explore. 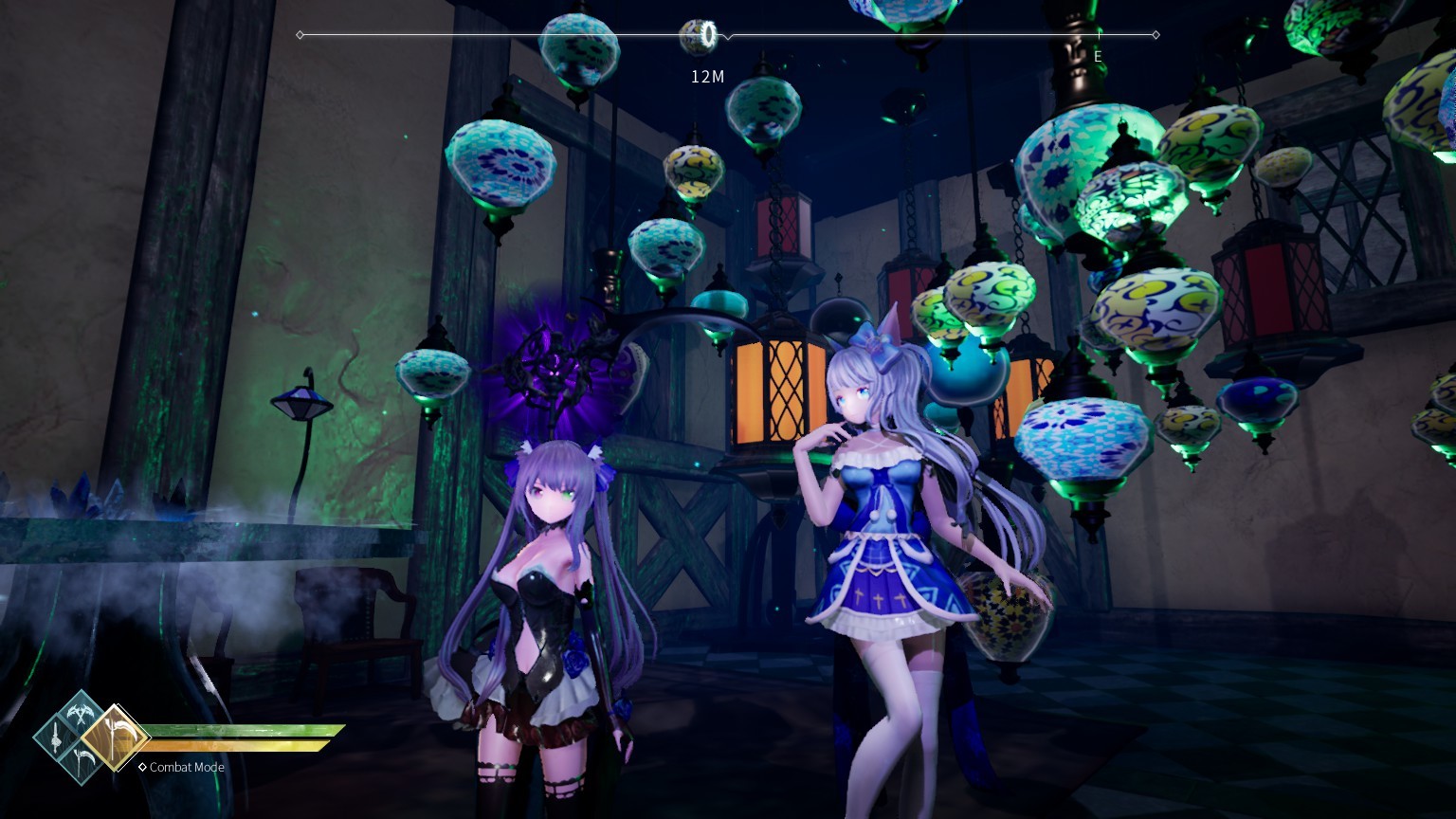 I have to say, the graphics are amazing for the team that produced them. This game almost looks like a game from a large established development team rather than small new developer. The characters are all highly detailed; the backgrounds and sky are highly detailed and while there are few graphical issues here and there in the animations it is nothing to complain about. You can tell that the Developer spent a lot of time refining the character’s looks as well as put a decent amount of polish on the background elements. You can even change the outfit the main character is wearing should you decide you want to freshen up your look. The text on screen leaves a little to be desired because it can blend into the background but that is really my only complaint I have. Maybe a nice translucent text box or thicker lines around the letter would help. 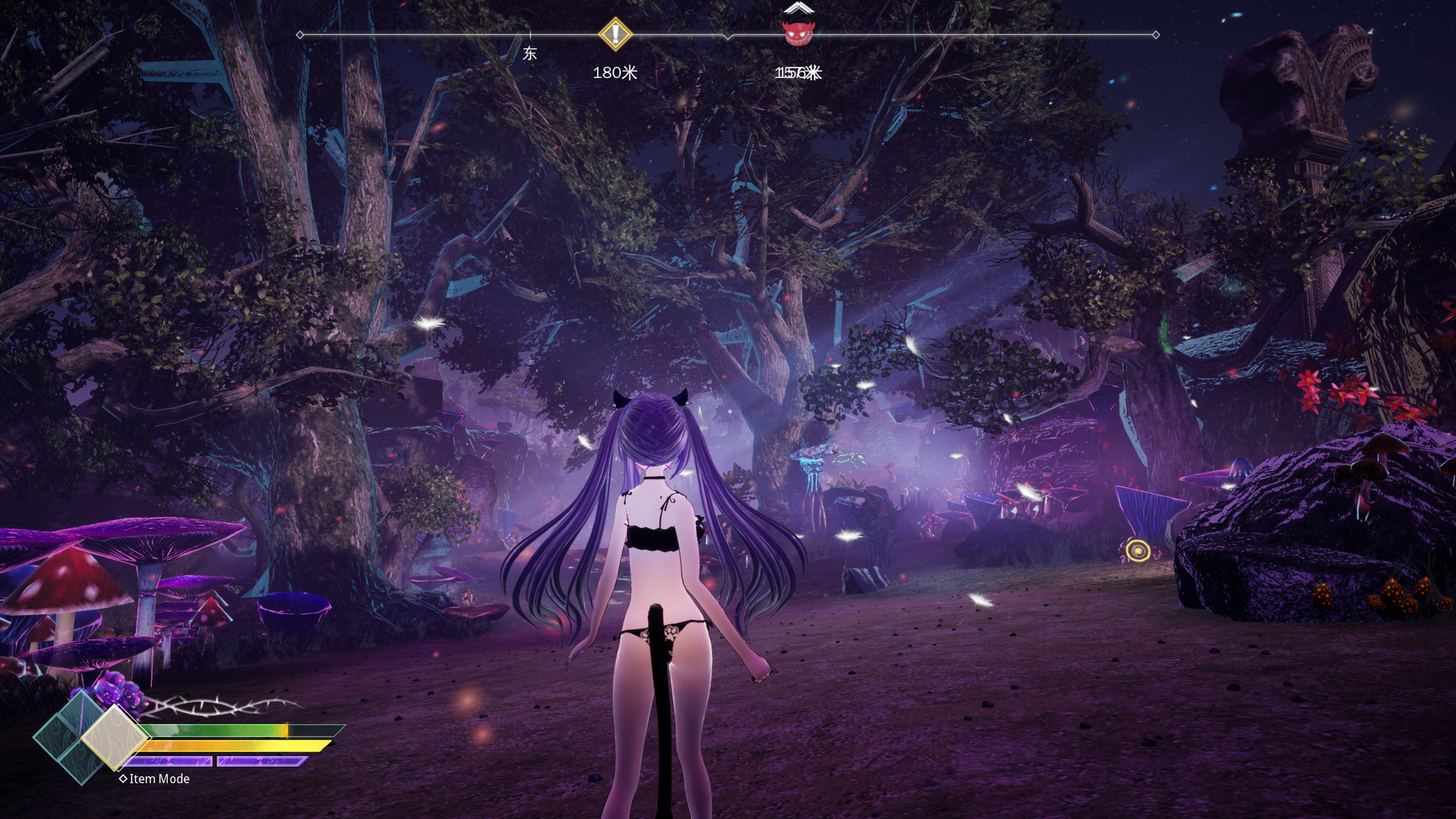 The voice acting in the game sounds well performed, although with it not being English it made it hard to really judge. The background music was incredibly well done by ProjectLights. Usually I end up tuning it out as I play. I then have to go back to a game to listen to its music to see if it had any but this time around I found myself intently listening to the music. It is one of those games that sound so nice I would be tempted to buy its sound track and listen to it even when not playing the game. The sound effects themselves were a little more on the generic side but that is perfectly acceptable. Overall, I was pleasantly surprised with just how well done this game was visually and aurally. 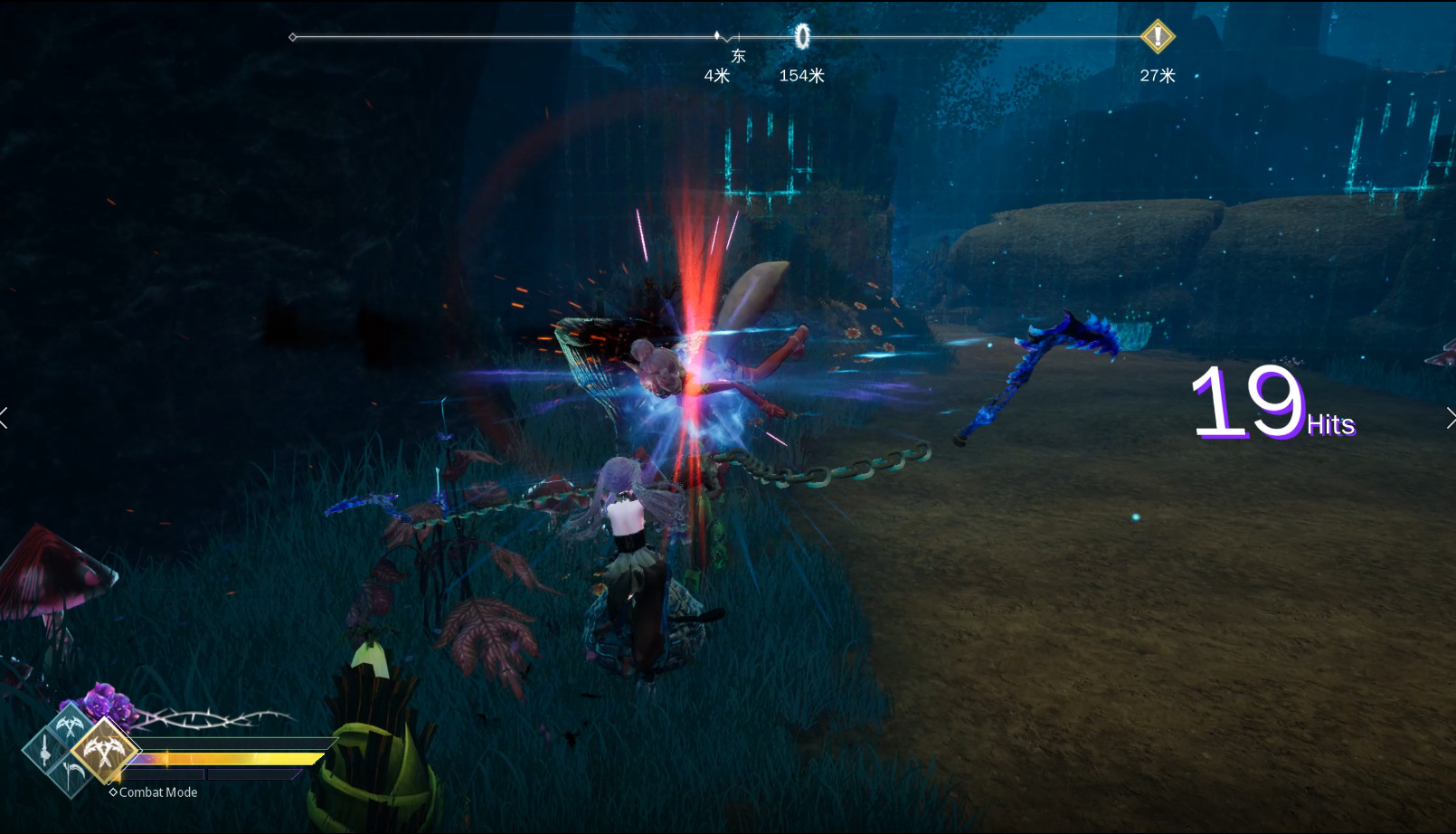 It is your standard 3D hack and slash style gameplay marred only by the awkward camera. The gameplay is largely you spamming buttons to pull of whatever moves you want in order to dispatch the current group of enemies. You then get to explore a little more and are faced with another round of enemies until eventually you fight a more challenging boss. I used a gamepad to play the game and it was quite easy to understand the button combinations required to pull off the various moves available to me. Some of the moves did not really seem to work properly although that could come down to me contending with unforgiving hit boxes rather than actual broken gameplay elements. An example I can give is your ability to pull small enemies towards you and pull yourself towards enemies. Rarely if ever did I manage to pull off these moves. I could see the magical hand fly out and look like it grabbed on to an enemy but then nothing more happened and the hand vanished. I think if I could have managed to get that to work properly it would have made for an interesting mechanic to use. The ability to swap weapons freely on the fly by just pushing a button was very welcome. The user interface even has little icons on the screen to help you remember which buttons to press. There are button combinations to have to deal with too, however, none of them are excessively complicated to pull off. The menus were easy to navigate and there were sufficient customization options available to allow you to change pretty much anything you need. 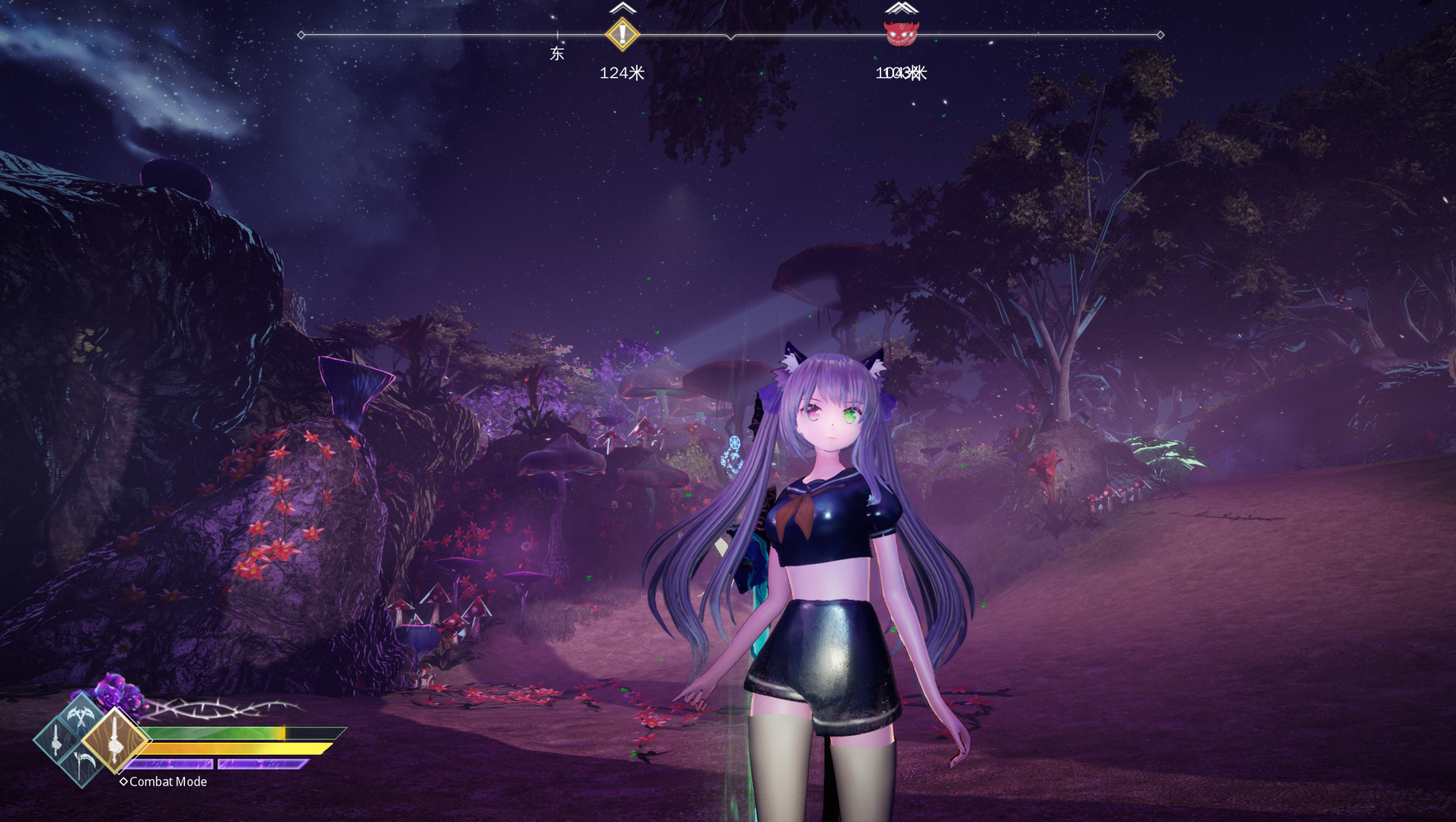 So, should you pick up Mysteria ~Occult Shadows~? If you are looking for a visually appealing action game, then Mysteria ~Occult Shadows~ might be one you will enjoy. It is definitely well done in terms of graphics with the main character and other important characters all being highly detailed as well as the environments you have to contend with being decently detailed as well. The music accompanying the game is also a treat to listen to. The gameplay itself is kind of generic though so if you are looking for a really exciting fast paced Action game with non-stop quick time events and challenging puzzles then this might not be quite what you are looking for. I feel this game has the potential to turn into quite a gem down the road assuming that it gets patches to fix its quirks, however, it is very hard to give a glowing review to a game that you can randomly fall through the ground in and has other flaws in it such as the story often cutting off before being delivered. I am going to Save this one for Later.