So much paper… so much creativity.

Popup Dungeon is one of the weirdest games I have ever reviewed. It feels like a two-part game for 2 audiences – on one hand I have a tactical RPG roguelite that spread its gameplay throughout multiple overall rather short campaign (that amount to a pretty big length, admittedly) and on the other, I have this deep game-creator mode where I can pretty much create anything I want – from characters to game modes, maps and so on. Tabletop game fans will be star struck by the creative potential of Popup Dungeon’s powerful editor while roguelite and tactical combat fans will surely enjoy the game’s extensive (albeit somewhat repetitive) roguelite campaign gameplay. 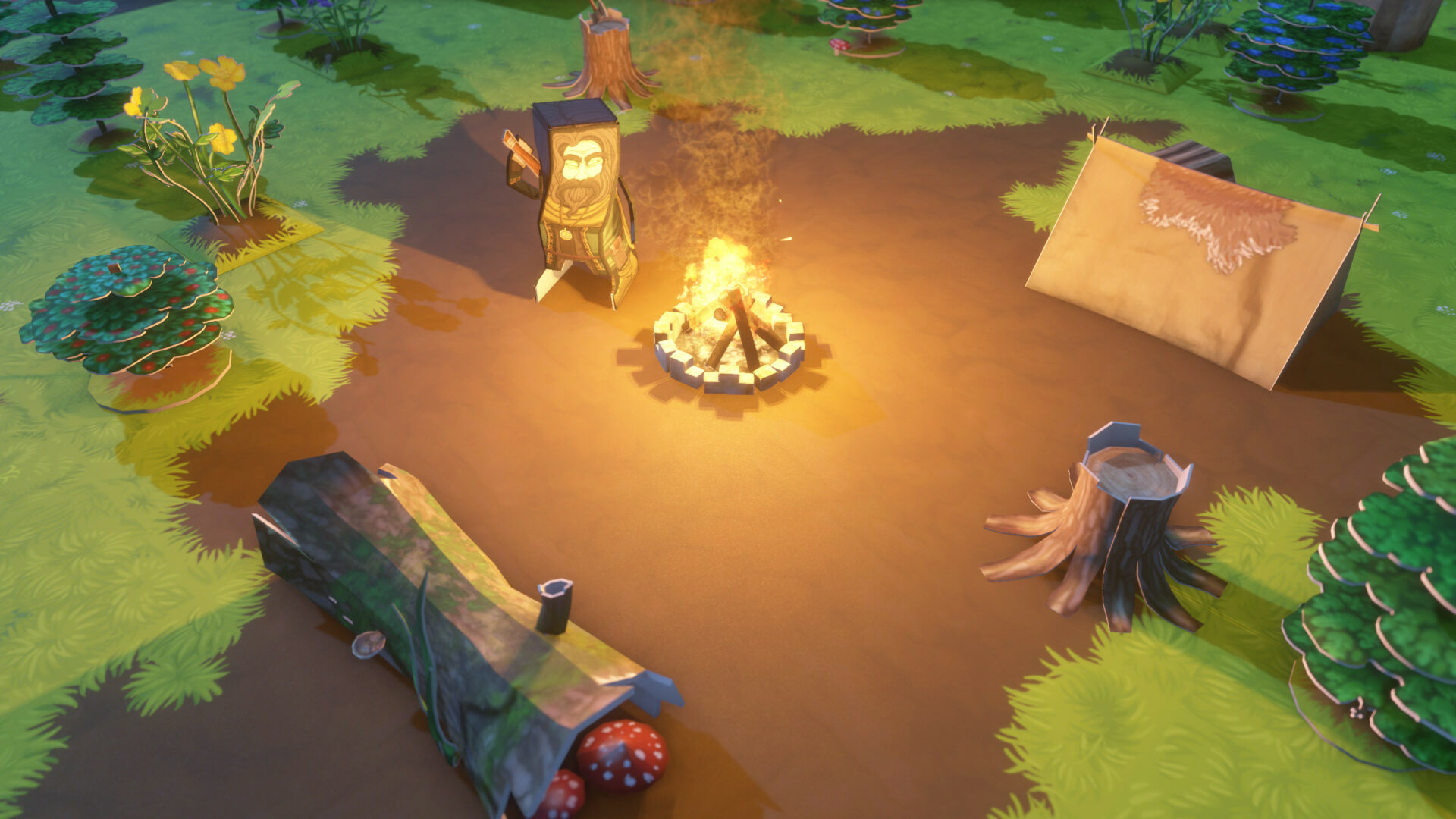 It’s hard to deny what Popup Dungeon offers content wise. I admittedly haven’t experienced it all… I just can’t – the steam store page description states “1500+ abilities, 420+ items, 200+ fully-voiced enemies, 36 playable characters”. How can I find all this in a decently sized amount of playtime? How many builds and party combat combinations can I create to massacre the TWO HUNDRED or so different enemies I can possibly face? I don’t know, but I can assure you – you’ll have a blast while still rocking brand new abilities hours after you finished that (well done) tutorial.

Let’s talk about the game itself and the campaigns – Sweetwater and Run Home are the two story-centric campaigns, a fantasy one and a sci-fi one, respectively. The story is told quite well through a fantastic voice over narrator and is surprisingly quite successful at being a hilarious game with lots of jokes and references. 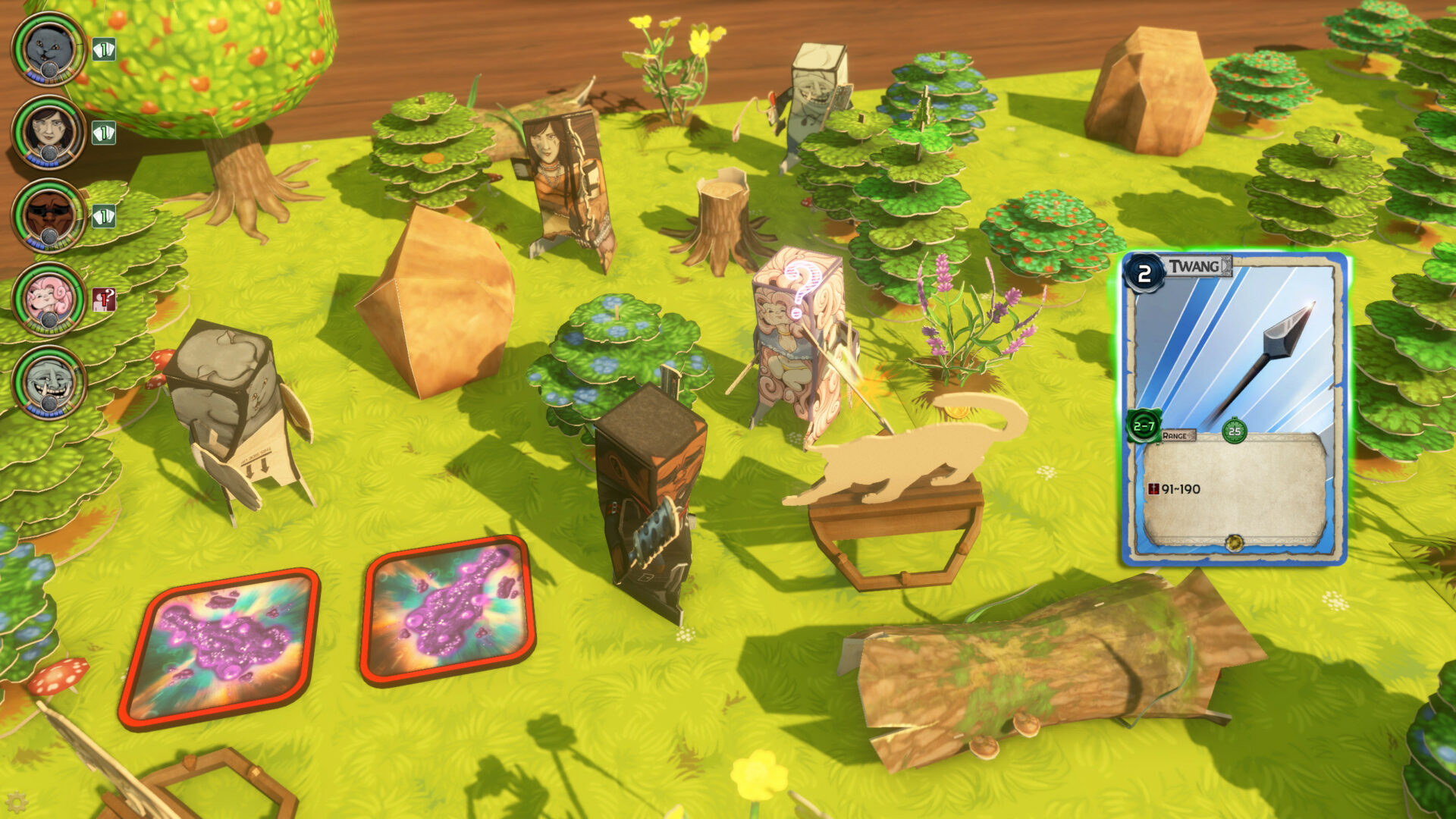 The game plays roughly the same both in the campaigns and the Wizard’s Tower (which is a more traditional roguelite mode where you go through 25 floors – story is hardly present in this mode), through the tactical XCOM/Divinity like gameplay with a loot and deck system.

Your abilities and available attacks are cards, which can then be found during gameplay: upgraded versions of abilities you already own or brand new ones, you won’t have a shortage of actions to choose from during gameplay. Gear is also present and can be found during gameplay, the weaker stuff can then be sold for gold. If you’re expecting some sort of card collecting gimmick on the side, forget it though as the cards are just that – cards, which suits the game’s art style, which I’ll discuss later.

Despite a solid tutorial, the menus and the UI are far less intuitive at first and can feel overwhelming as I wasn’t sure at first what I could click on (or not) so some sort of aura around clickables would be much appreciated for early players – the menus almost need a tutorial of their own at first, honestly. Even during combat, the card usage, cancelling and overall usage of the mouse controls to manage your 5-character (or less) sized party is quite clunky… while some usage will allow you to manage it swiftly, I can’t stop but think easier methods could’ve been implemented to fix some of the janky parts of the combat interactivity. 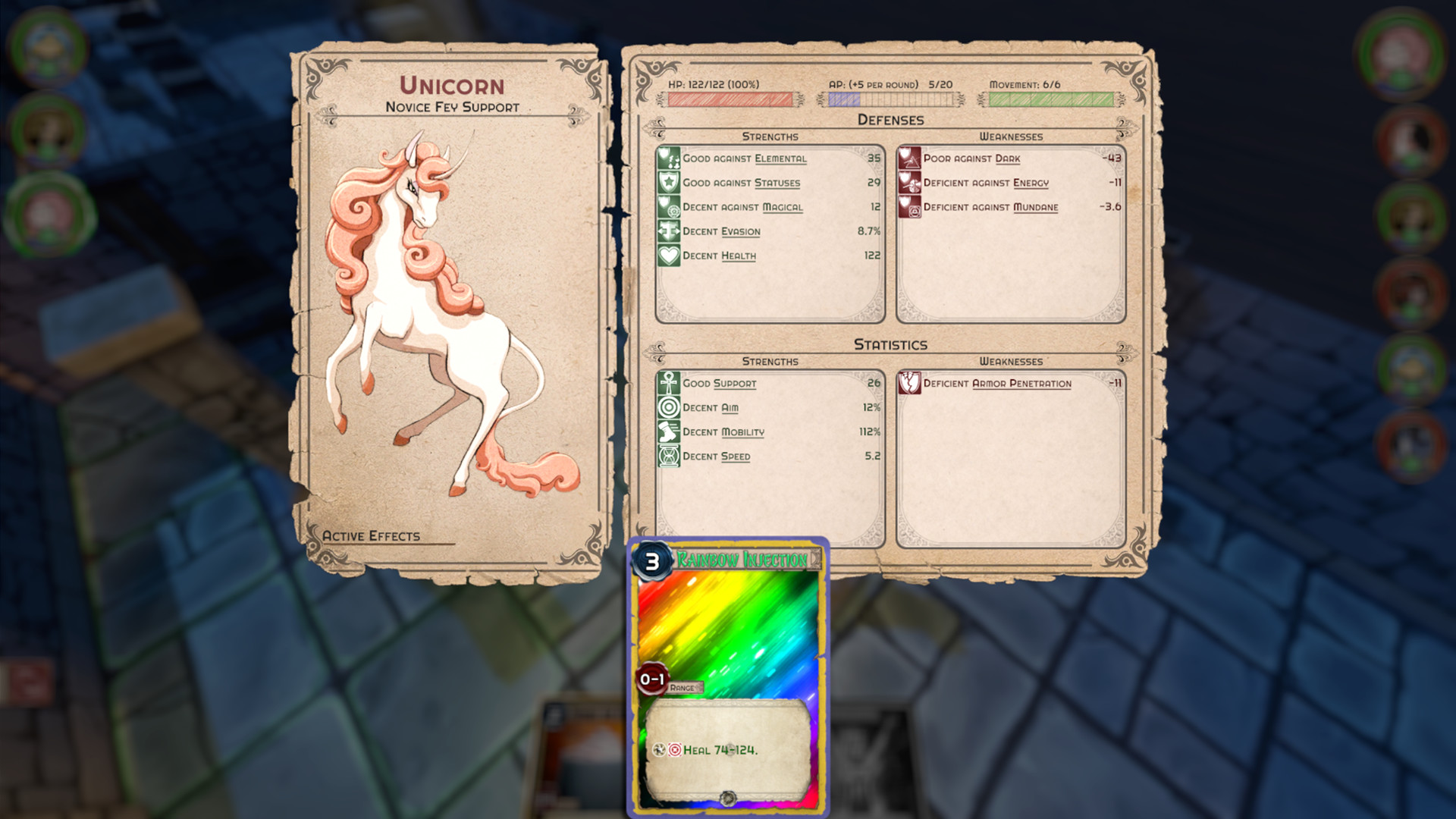 There is a great deal of depth in the gameplay thanks to the variety of cards (both active and even conditional abilities – activated when certain criteria are met) and characters, which is great for tactical fanatics but also worsens the UI issues for beginners. Despite this, combat is a thrill, as parties are slightly larger than the usual 4 – you can go with 5 characters at most here. The environment variety is stellar, you’ll frequently transition between entirely different environments and biomes – from post-apocalyptic to medieval, forest looking ambients, and so on. A problem with the game is despite difficulty being gradual, there’s a power balance I couldn’t full understand due to sheer amount of abilities and enemies in the game – you’ll frequently wipe half the enemy team in a turn, but get one shot by an enemy right after… it’s a dynamic I’m not fully sold on, bordering on unbalanced in my opinion.

You can also play with CUSTOM CREATED CHARACTERS. Literally create a character from scratch, even design it. Due to the game’s paper-like graphical design, you can pop photoshop and create your own stuff putting it into the game for other to then download. 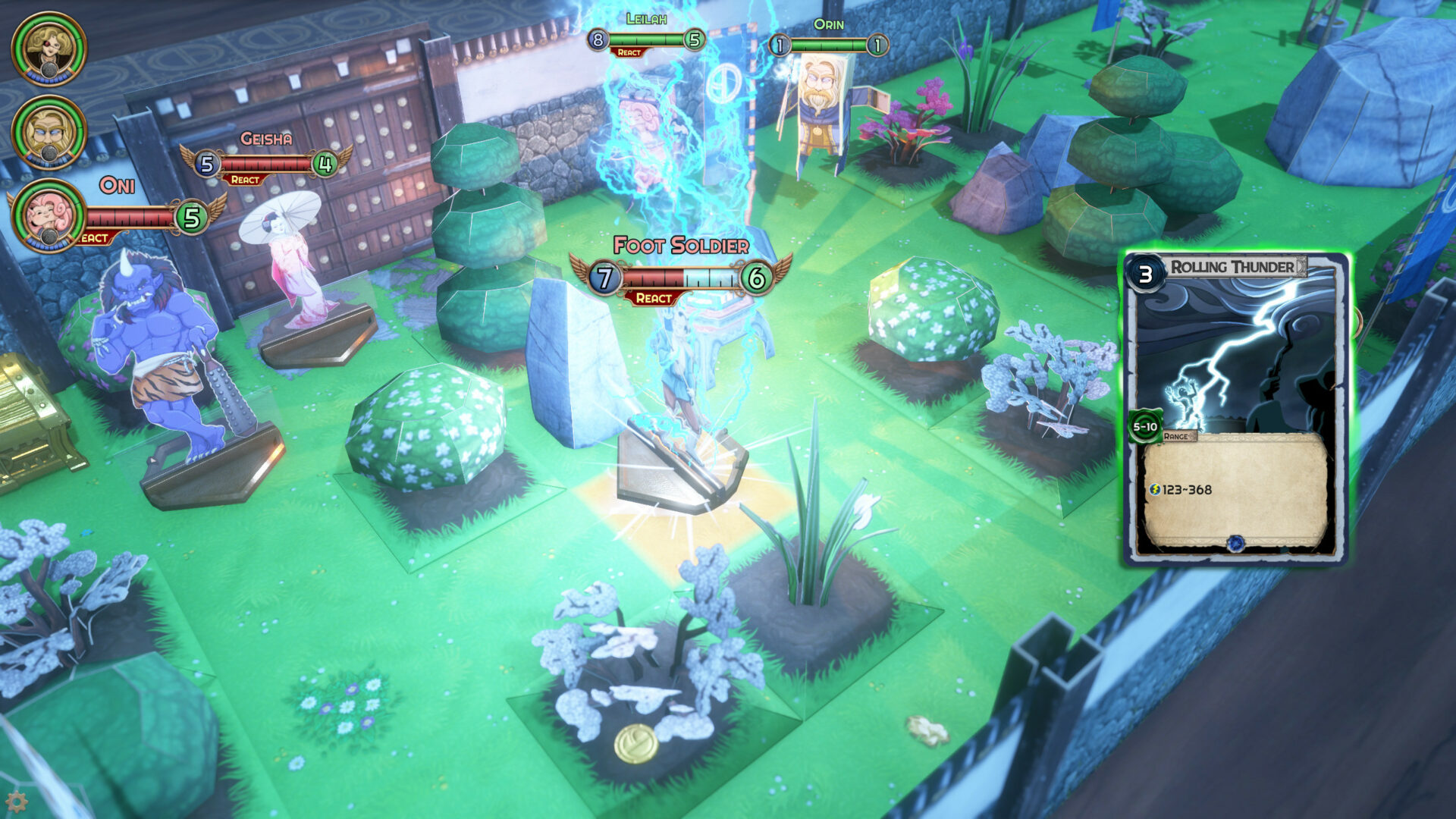 Beware as the EULA is VERY agressive in its current state – the mods are controlled in-game, no Steam Workshop support. On top of that, mods are all controlled and OWNED by the developer, so people into modding this game and create their own content must be aware of this. The developers, however, are PHENOMENALLY passionate and communicate very often with the community about a lot of matters related to the game and have been clear with trying to loosen the leash on the mod control. If this SERIOUSLY bothers you, then wait… otherwise, you’ll hardly find another game with such a phenomenal editor such as this – literally endless possibilities, I haven’t seen something with such potential since Taletop Simulator as far as community created content is concerned.

This was an important matter to discuss so with that out of the way, let’s talk about the creative side. The variety of assets to deploy and the extensiveness of the freedom you have when creating levels, characters, enemies and so on. A future update will even add custom interactible objects to deploy in the maps. YOU CAN EVEN CREATE YOUR OWN SKILLS!! Absolutely fantastic, I adore the potential of this creation mode and I can see it being used for plenty of new games within this already rock solid tactical RPG. Dungeons & Dragons style maps and adventures seem like something this game’s editor was absolutely made for.

Graphically the game is quite unique. Characters are cardboard cutouts that are assembled into a person-shape and drawn over. Each character has its own look and style and you can see a lot of thought was put into the art style and the gameplay and how it all blends into a really cohesive style I absolutely adore. UI issues aside, the game runs beautifully and looks great – I can’t stress it enough. The variety of environments is also fantastic as I pointed out before.

Audio wise, the soundtrack is solid and the star of the show is absolutely the narrator (voiced by John DeLancie known from Star Trek) that brings the nicely comedic writing to life during gameplay.

Due to Popup Dungeon’s naturally infinite gameplay loop of roguelite tactical gameplay and a remarkable editor, content is plentiful but it’s also going to be my oddest and indecisive recommendation. Why? I cannot wholeheartedly recommend the game at the price of 24,99€ for people looking for the roguelite experience alone. If you are not using the editor, there is better at a cheaper price, in my opinion. So as far as a package, Popup Dungeon is worth it if you’re into the game and asset creation component of it, otherwise a sale is your best moment to buy the game.